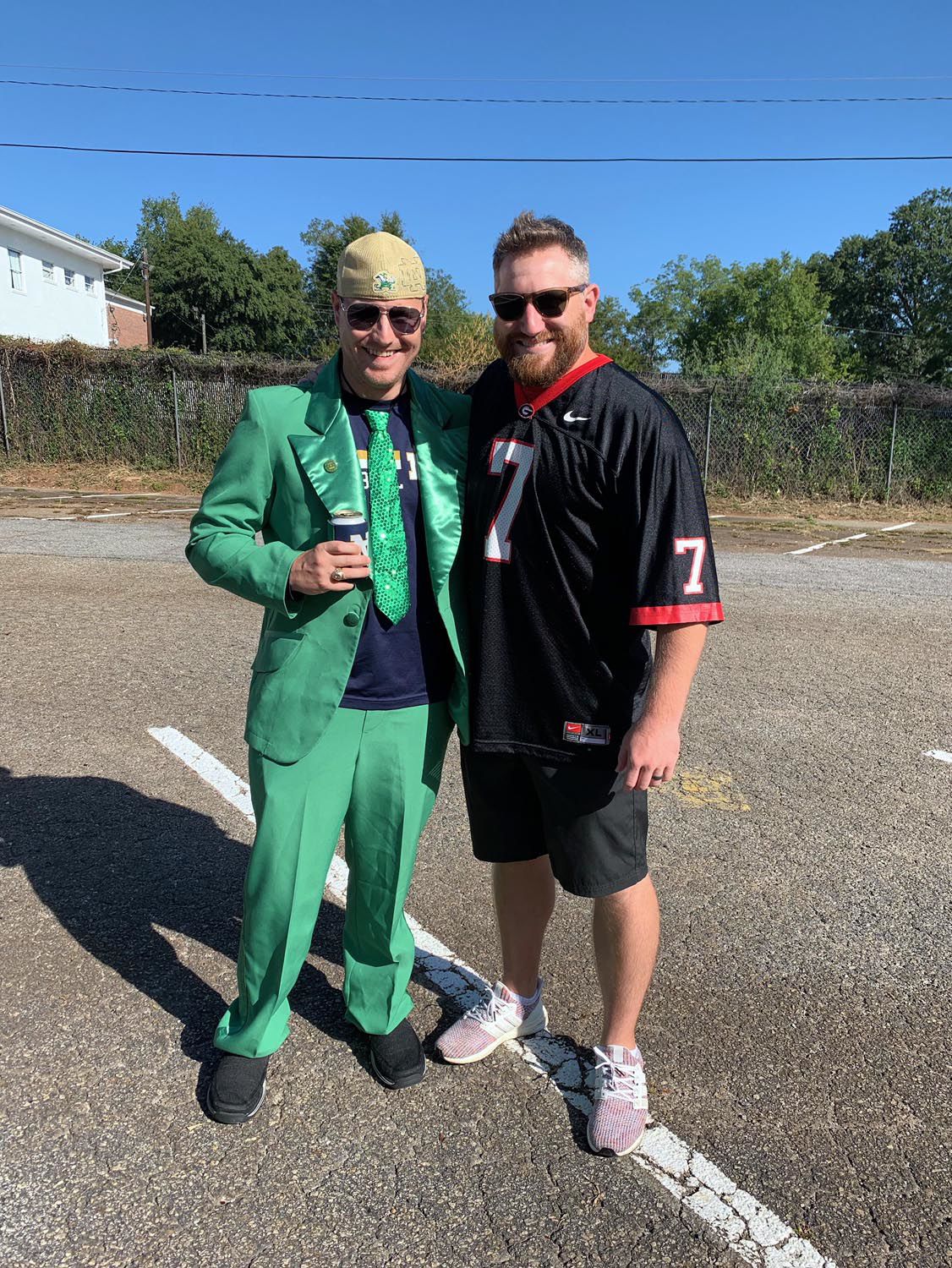 Etowah High School cross country coach, Garrett Hurlbert (right) and friend Sean Tynan (left) pose for a picture before the Georgia and Notre Dame game this past Saturday in Athens. 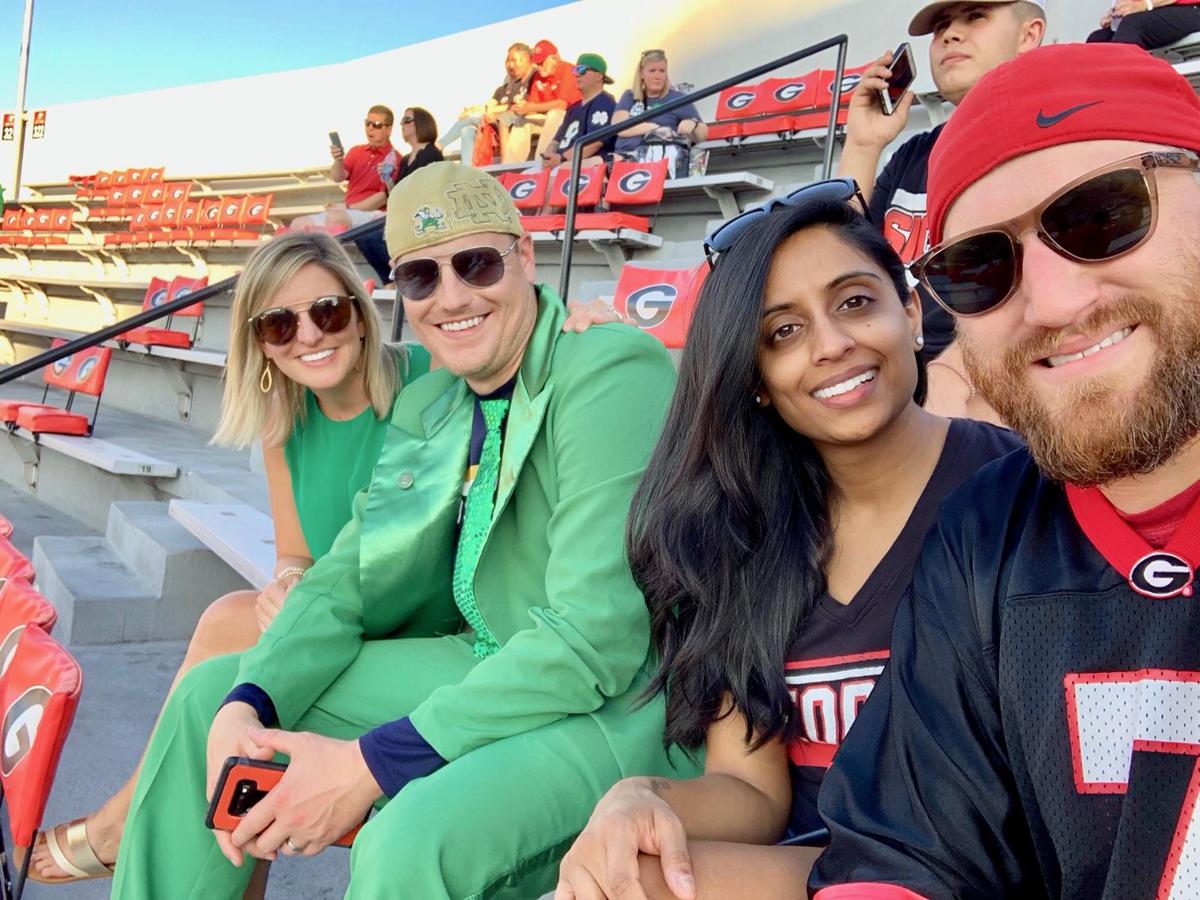 Garret Hurlbert, right, attended the Georgia-Notre Dame game last Saturday with his wife, Henna Govan, and friends Rachel and Sean Tynan. Hurlbert, the cross country and track coach at Etowah, has been friends with Sean Tynan — a Notre Dame fan — since their days in the U.S. Air Force. 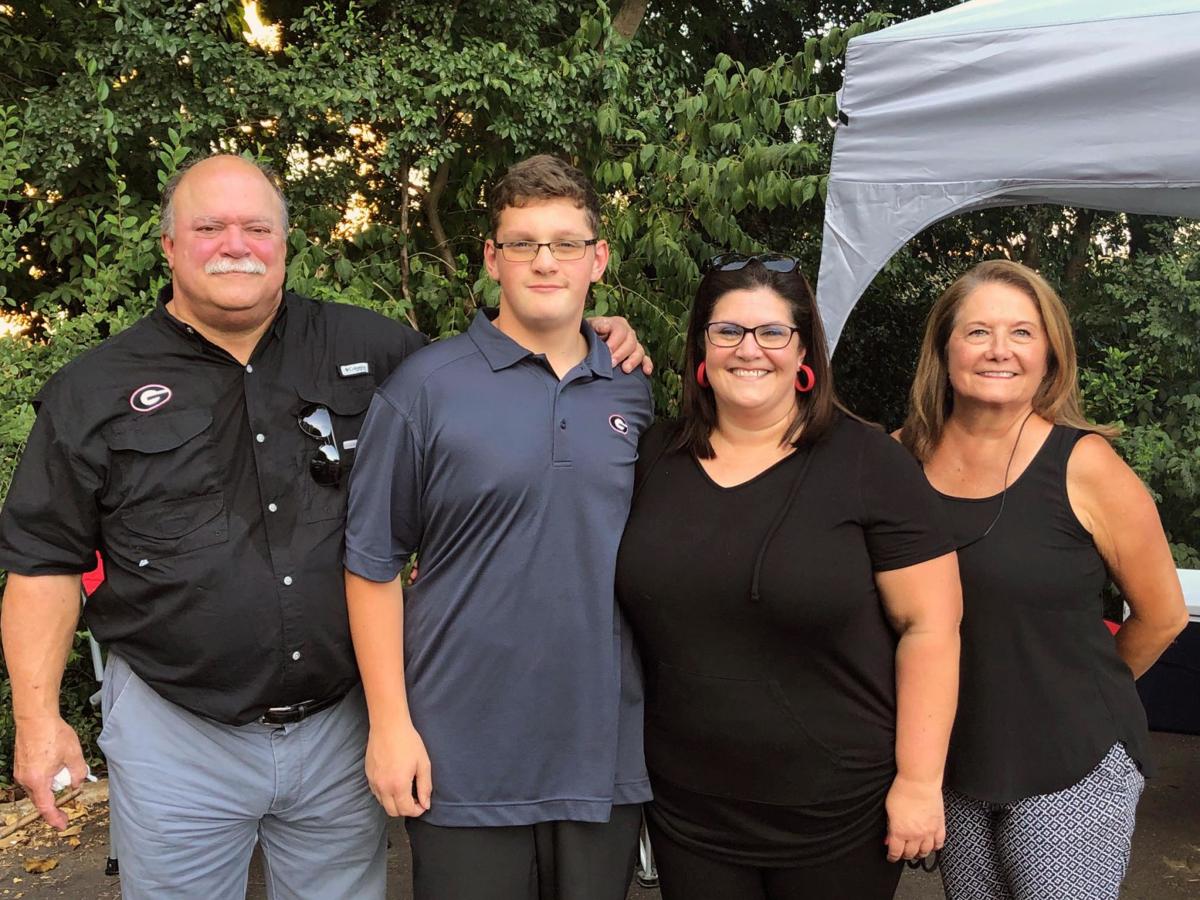 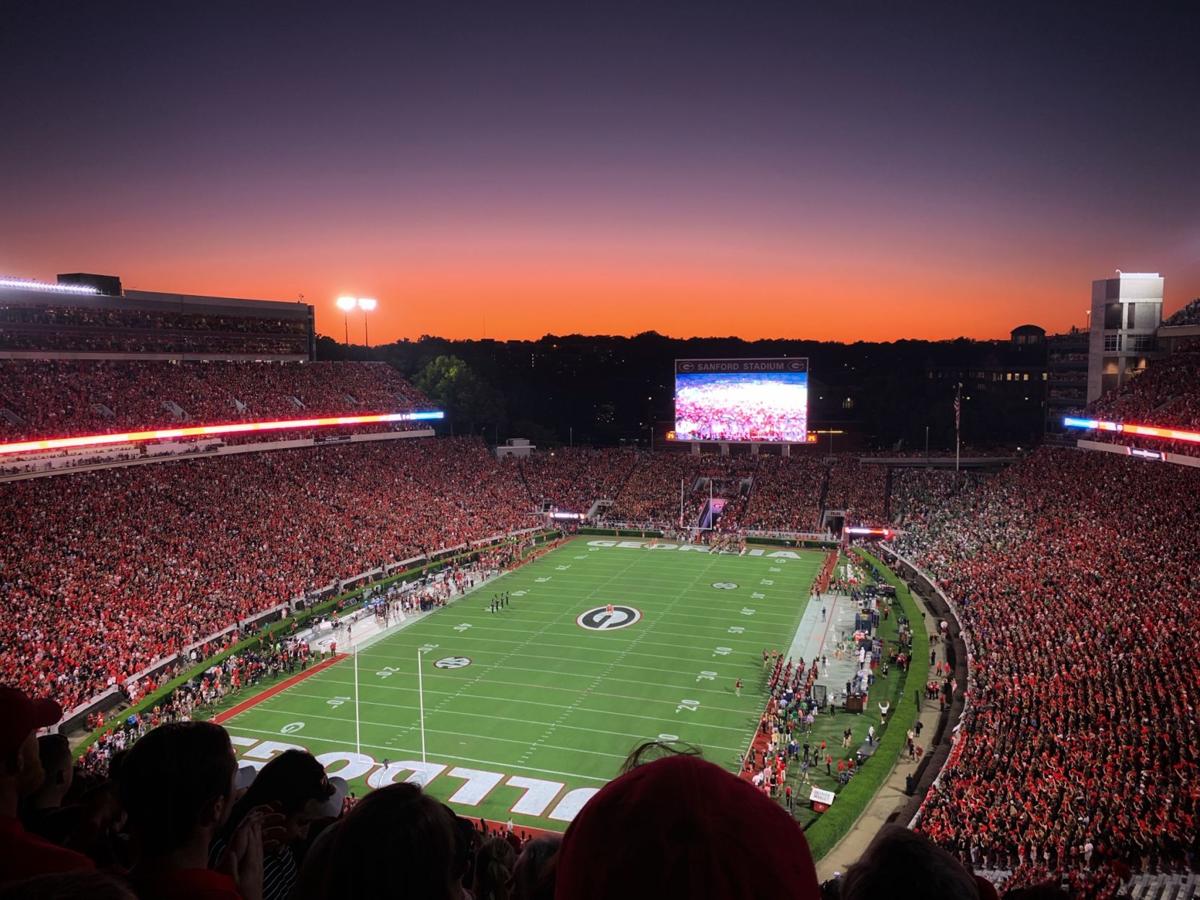 Joseph Shelley, a 2005 Cherokee High School graduate, took this photo and said Saturday night's game in Athens was one of the best he's ever seen in person. 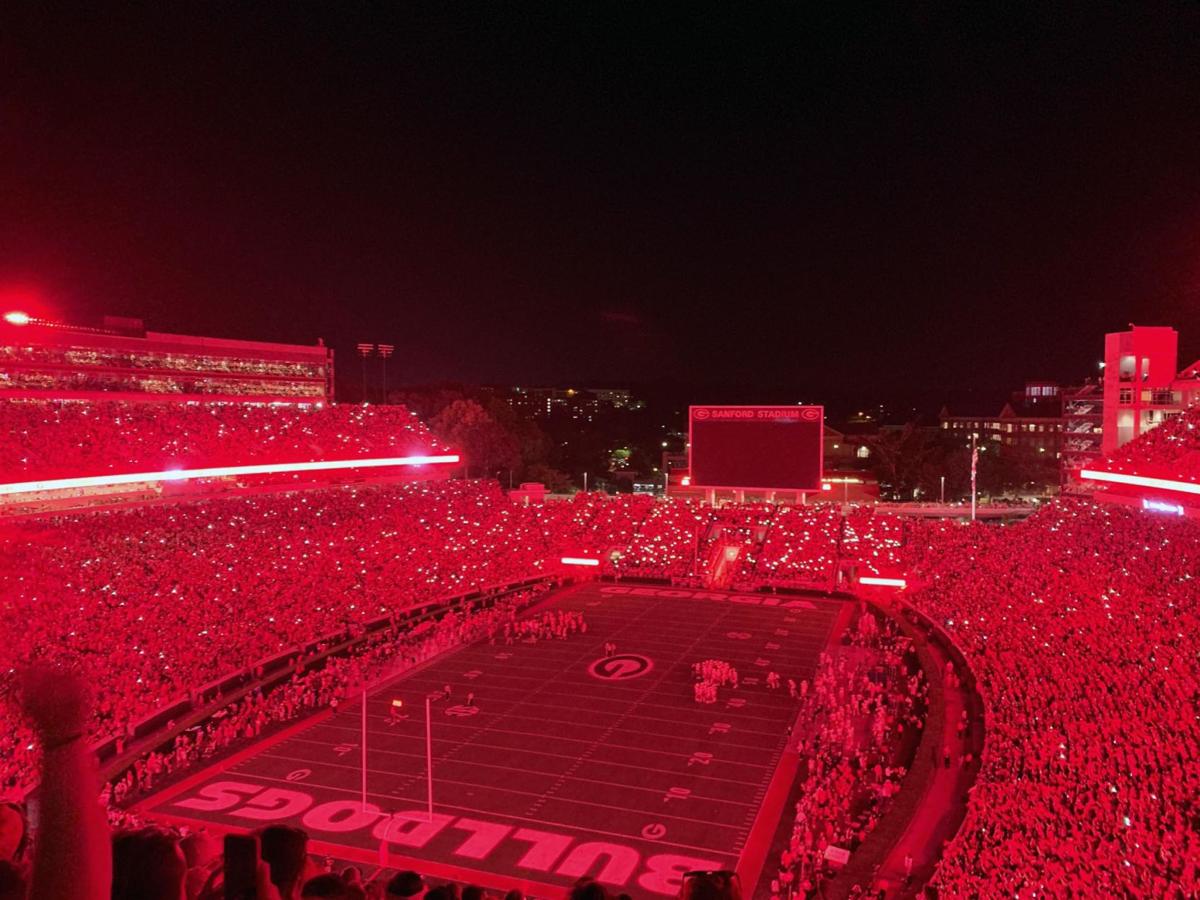 The view from Joseph Shelley's seat before the fourth quarter at Saturday night's game in Athens. 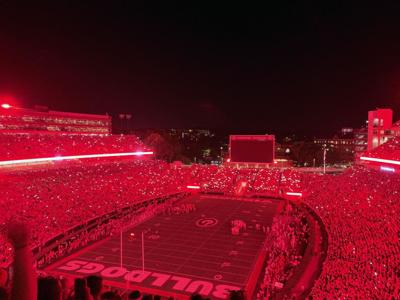 Etowah High School cross country coach, Garrett Hurlbert (right) and friend Sean Tynan (left) pose for a picture before the Georgia and Notre Dame game this past Saturday in Athens.

Garret Hurlbert, right, attended the Georgia-Notre Dame game last Saturday with his wife, Henna Govan, and friends Rachel and Sean Tynan. Hurlbert, the cross country and track coach at Etowah, has been friends with Sean Tynan — a Notre Dame fan — since their days in the U.S. Air Force.

Joseph Shelley, a 2005 Cherokee High School graduate, took this photo and said Saturday night's game in Athens was one of the best he's ever seen in person.

The view from Joseph Shelley's seat before the fourth quarter at Saturday night's game in Athens.

After years of anticipation, the game with high expectations lived up to the hype.

In June 2014, Georgia and Notre Dame announced a home-and-home series that would see the two historic programs face off twice -- 2017 in South Bend, Indiana, and 2019 in Athens. For many Bulldog fans, the dates for the two-game series were circled on calendars and plans to attend one or both of these matchups were put into motion.

After beating Notre Dame 20-19 in 2017, Georgia completed the sweep Saturday, winning 23-17 in front of a record crowd at Sanford Stadium in Athens.

According to several Cherokee County residents and natives, whatever effort was required to attend was well worth the trouble.

“As you can tell, I still haven’t quite gotten my voice back,” Garret Hurlbert, the head cross country and track and field coach at Etowah, said Monday afternoon. “I’ve had season tickets for the past eight years and that’s definitely one of the top two or three games I’ve ever been to.”

Hurlbert graduated from Georgia in 2006, then began active service in the U.S. Air Force. He served as a Space and Missile Officer from 2006-10 while stationed in Cheyenne, Wyoming, and became friends with fellow Air Force officer, Sean Tynan -- a Notre Dame fan.

The pair remained close when Hurlbert returned to Georgia to begin his teaching career, and when the two-game series was announced, he and Tynan were in communication shortly thereafter.

“We were planning this for five years,” Hurlbert said. “It was funny because (the Etowah cross country team) actually didn’t have anything scheduled for this past weekend, but then the varsity girls said they wanted to run an event on Friday night. I told them, if they could get a few assistants to go, then it would be no problem, but I wouldn’t be able to make it because of something I’d been planning for a long time. They kind of looked at me funny, and then they all laughed when I pulled up a text from five years ago.”

Hurlbert and Tynan, along with their wives, Henna and Rachel, arrived in Athens early Saturday morning. Sean Tynan, who wore a full green suit and tie, said the reception from Georgia fans was one he would remember.

“I couldn’t tell you how many people came up to me and shook my hand and said they were glad we were there. Just total class,” Tynan said. “As far as the atmosphere in the stadium, it was very impressive. You see Notre Dame huddling to start the fourth quarter and then it goes all black before the red-out. I can’t imagine trying to be coached up in that atmosphere.”

For other long-time Georgia fans, the lead-up to Saturday’s game was similar to those from more than 40 years ago.

Canton resident Calvin Stephenson said his earliest memories of games in Sanford Stadium were as an 8-year-old, before a second level had been added to the stadium. He said Georgia's 1971 game against Auburn -- a game where he felt Tigers' quarterback Pat Sullivan cemented his grasp on the Heisman Trophy -- was one that sticks out in his mind but added today’s scene is also different in many ways.

“Of course, back in those days, you didn’t have the media like you have now,” Stephenson said. “Also, the team is just different now. Back then, we thought we had a great year if we won seven or eight games. Athens is different, too, because downtown wasn’t what it is now.”

Stephenson, a 1974 Georgia graduate, is in the middle of a long line of Georgia graduates in his family. His great-grandfather, T.W. Reed, was the university's registrar in the first half of the 20th century and is the man for whom the Reed Hall dormitory is named.

For Joe Shelley, a 2005 Cherokee graduate, the game surpassed all expectations. A four-year football letterman for the Warriors, Shelley went on to attend Georgia and graduated in 2009.

Shelley, who has been a season-ticket holder with his wife Allyson since 2013, said Saturday’s game was comparable to the best he has ever seen.

“It was a fantastic experience from top to bottom,” Shelley said. “It’s one of the best environments I've ever been in. It was comparable to the 2007 Auburn game and the 2013 LSU game. It was certainly up there with those. I felt like the fans were into it from kickoff.”

Before Saturday night, Notre Dame had not visited a Southeastern Conference team since 2005, when it traveled to Tennessee. The game also marked the first non-conference matchup between two top-10 teams in Sanford Stadium since the 1966 game against Georgia Tech.

Sanford Stadium saw a number of firsts Saturday, including the unveiling of its new in-game lighting experience.

“I felt like there was certainly a strategy to it,” Shelley said. “You really can’t ask for more when you're rolling something like that out against a top-10 opponent with so much history. I think it was certainly targeted at all the recruits, and I think it definitely affected the game, too.”

For Hurlburt and Tynan, two friends with different allegiances, the game and build-up was a perfect way to stay close over the past few years. To have the culmination of years of planning end with a game that came down to the final possession was probably as good as anyone could have asked for.

After a full day of tailgating followed by the 8 p.m. kickoff, Hurlbert, Tynan and their wives made it back to Woodstock at 3 a.m. Sunday morning. Compared to other games he had seen in person, Hurlbert said Saturday’s experience was at the top of the list.

“The two biggest games I’ve ever been to were the 2004 and 2013 LSU games,” Hurlbert said. “This one was on par with those, if not better. My wife was three inches away, and we could barely hear each other. The whole thing was an amazing experience.”