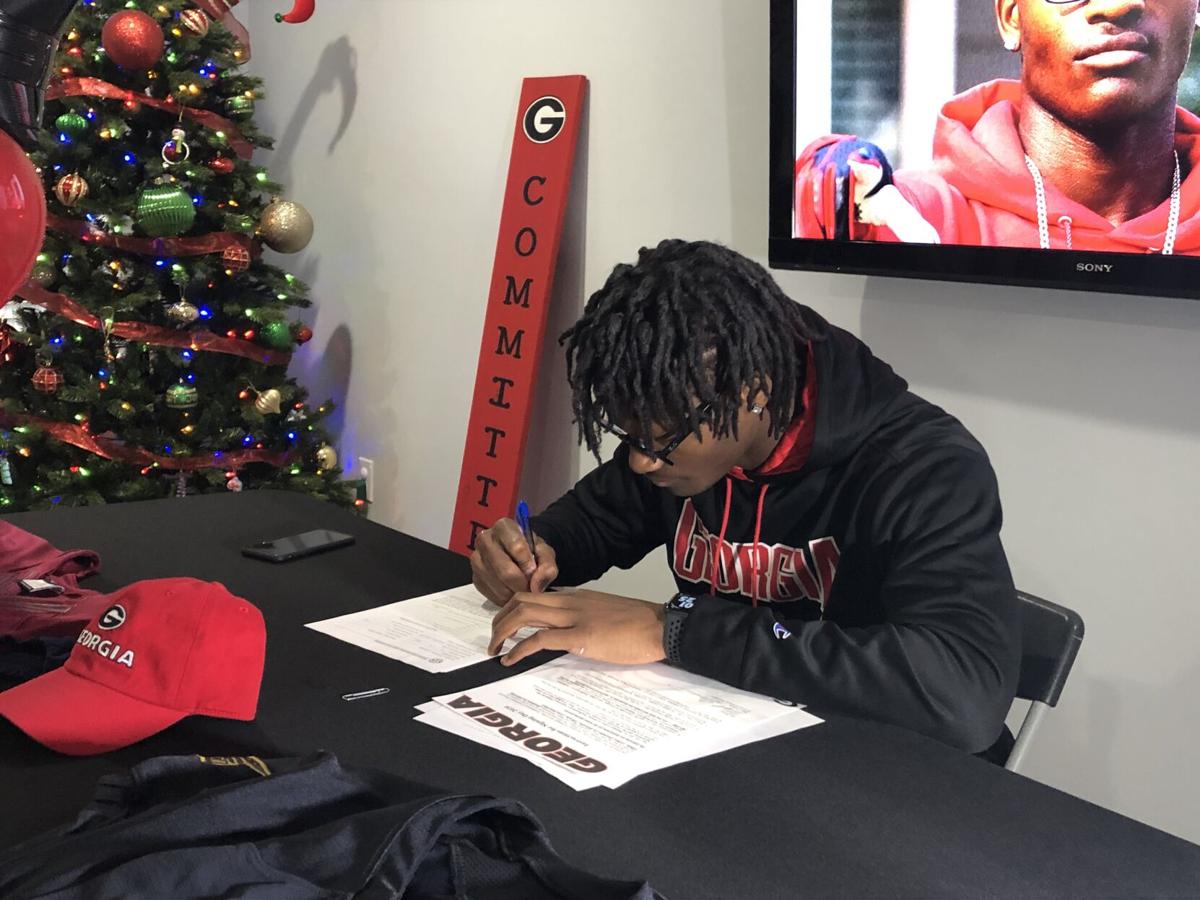 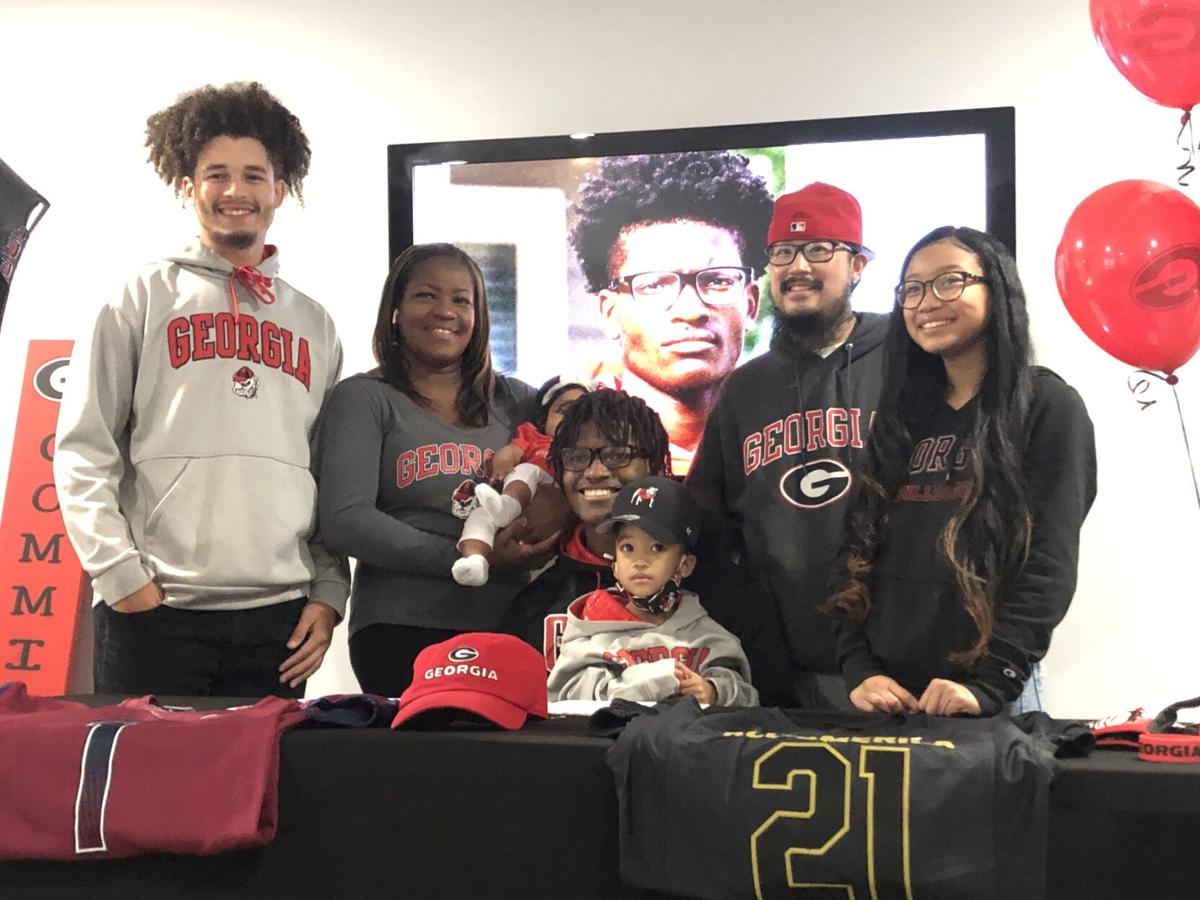 Woodstock senior David Daniel poses with family after signing his National Letter of Intent with Georgia. 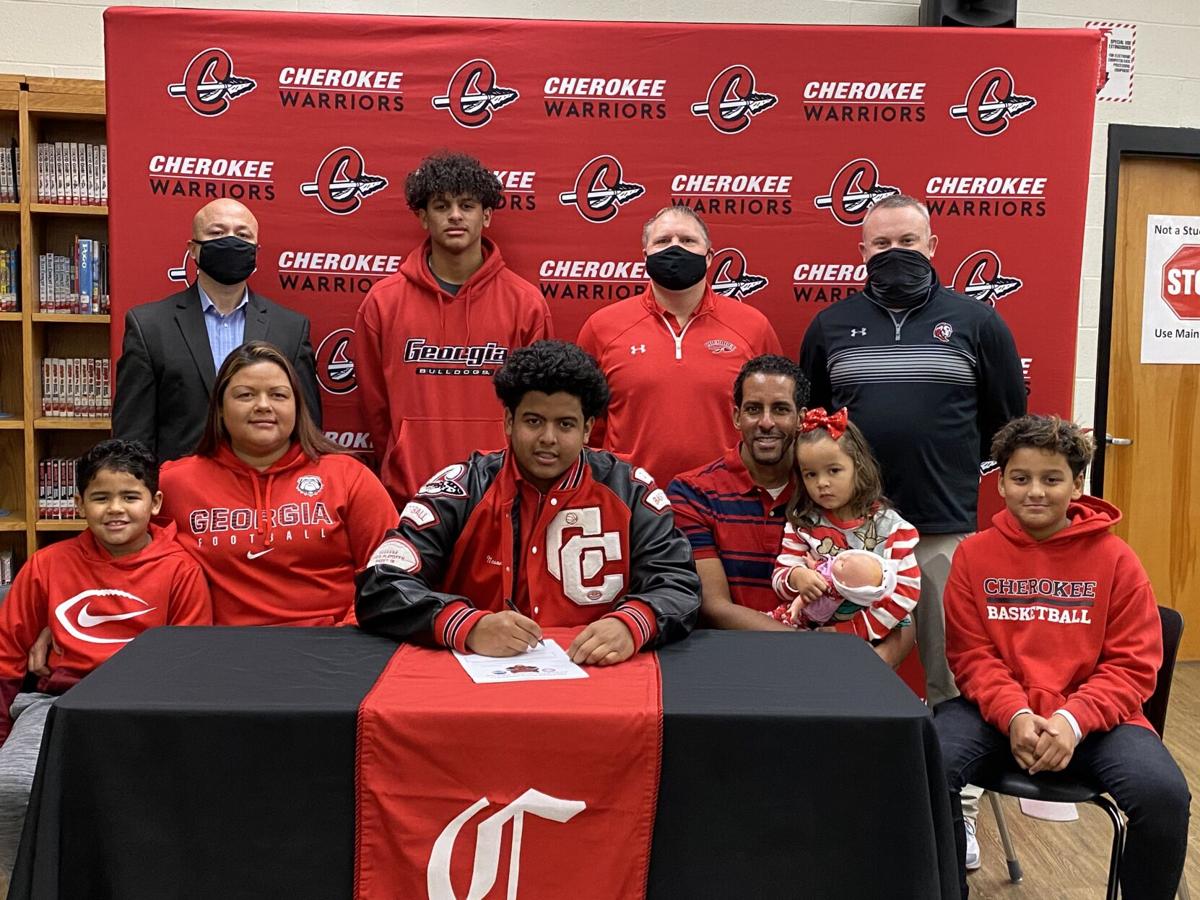 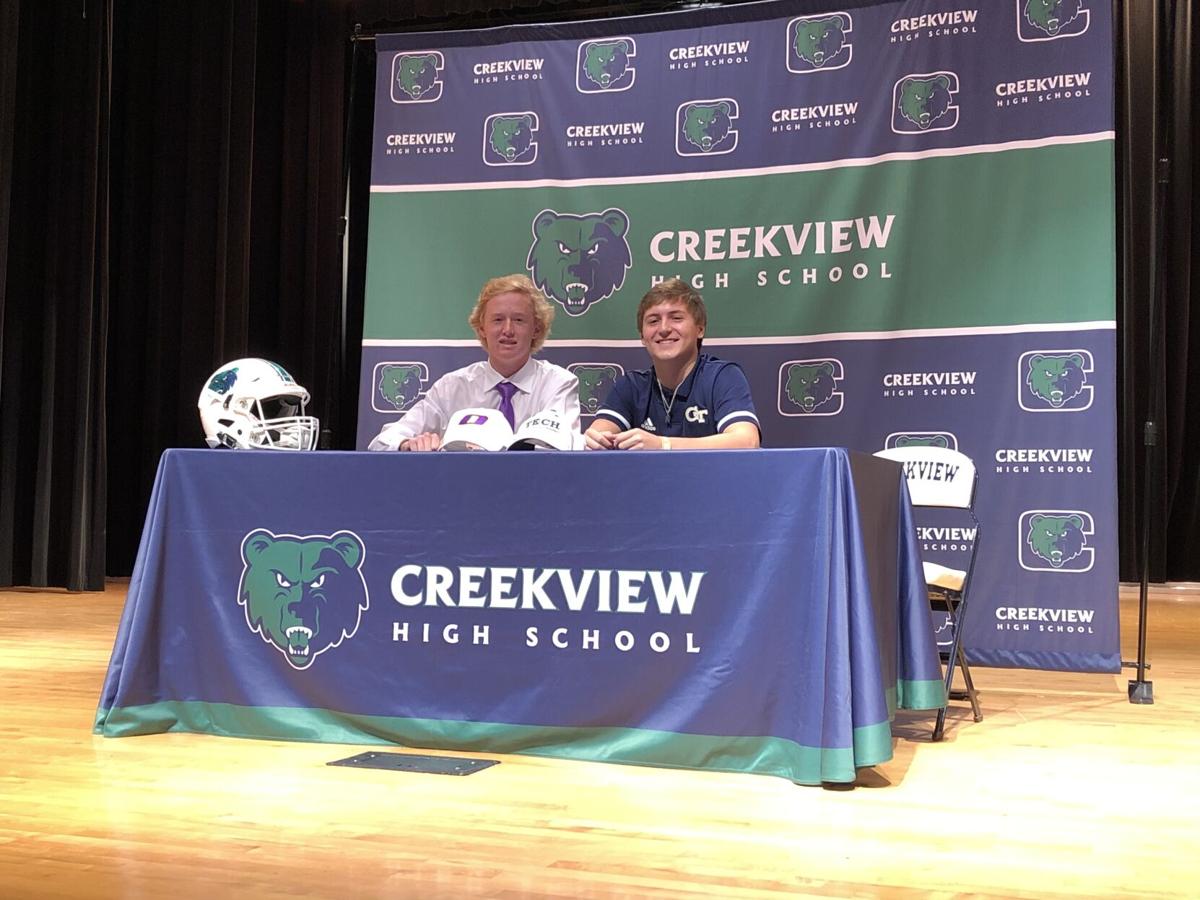 Creekview wide receiver Andrew Cloy, left, and quarterback Brody Rhodes both made their college destinations official Wednesday. Cloy signed with Olivet Nazarene University in Illinois, while Rhodes will head to Georgia Tech as a preferred walk-on.

Woodstock senior David Daniel poses with family after signing his National Letter of Intent with Georgia.

Creekview wide receiver Andrew Cloy, left, and quarterback Brody Rhodes both made their college destinations official Wednesday. Cloy signed with Olivet Nazarene University in Illinois, while Rhodes will head to Georgia Tech as a preferred walk-on.

WOODSTOCK — One year after becoming the first player to commit to Georgia’s 2021 recruiting class, Woodstock senior David Daniel made his intentions official.

Daniel, a four-star prospect and the No. 3 athlete in the country according to 247Sports, signed his National Letter of Intent on Wednesday during a ceremony at his home in front of friends and family.

With his high school career now behind him, the highest-rated recruit in Cherokee County history is turning his eyes towards Athens.

“I still remember the first few days of high school. It seems like it flew by so quick,” Daniel said. “It feels good today to see all my hard work pay off. I’m excited about the connections I will make up there, meeting new people. I’m getting a chance to do what I love to do and have fun while doing it.”

“I always felt a good family atmosphere from (Georgia), and they always treated my sisters and my parents well. I knew that, if they treated them well, they would do the same for me.”

Daniel chose Georgia over a number of the best programs in the country including Alabama, LSU, Oklahoma, Ohio State and Florida, among others.

The rangy defensive back finished his senior season with 77 tackles, six pass breakups, three tackles for loss, two forced fumbles and one punt block. On offense, he totaled 26 receptions for 283 yards with four touchdowns, along with 15 carries for 104 yards with another score.

Though Daniel compiled more than 500 all-purpose yards as a senior, he is projected to compete at safety at Georgia.

“I’m an all-around player. I work on all aspects of my game,” Daniel said. “I can bring whatever they need me to bring to the table.”

Daniel’s mother, Nikki Sisavanh, said it will be hard seeing her only son go away to college, but she was grateful for the fruition of a dream.

“Watching David go to the next level, it is something that we’ve always prepared him for, and I couldn’t be more proud of him than I am right now,” Sisavanh said. “We started talking about college in sixth grade, maybe even before, and this is what he always wanted. He’s worked for this. Watching him live his dream, it’s all happiness.”

Daniel was one of a handful of players from Cherokee County who made their college decisions official Wednesday.

Creekview quarterback Brody Rhodes and wide receiver and Andrew Cloy each committed to their schools of choice.

For Rhodes, it was the culmination of a dream come true. The dual-threat quarterback committed to go to Georgia Tech as a preferred walk-on, choosing the Yellow Jackets over offers from Kennesaw State, Army and The Citadel.

With his father and uncle both former players at Georgia Tech, Rhodes has been attending games at Bobby Dodd Stadium for more than 15 years, and he said it was an opportunity that would have been very difficult to pass up.

“Georgia Tech has been my dream school since I was 3 years old,” Rhodes said. “It’s a huge dream come true, a crazy feeling and I’m super excited. Obviously, coach (Geoff) Collins has changed the culture in just a few years. I’ve seen what it’s about from afar, and I’m excited to be a part of it. I really just can’t wait to get there and compete.”

A three-year starting quarterback at Creekview, Rhodes finished his career with more than 4,800 total yards and a 21-6 record as a starter. He helped lead the Grizzlies’ senior class to the most wins for any graduating class in program history (31), along with the team’s first region championship in 2018.

“The games are easy to remember but all the practices, the workouts in the summer with the dudes I’ve played with since I was five-years-old, the players, the coaches and trainers, that’s what I’ll remember most.”

Cloy signed with Illinois’ Olivet Nazarene University, which competes in the NAIA.

Cloy missed a large portion of his senior season due to a collarbone injury, but he returned to action late in the season to help secure a playoff position for the Grizzlies. He finished his career with 40 receptions for 670 receiving yards (16.8-yard average) and seven total touchdowns.

Cherokee’s Nason Simmons was the fourth player to sign, and in a last-minute decision, the 6-foot-6, 280-pound offensive tackle chose Arkansas State after previously being committed to Tennessee Tech.

The decision was not made in haste, however. Former Tennessee coach Butch Jones was named Arkansas State’s coach Sunday, and the opportunity to compete in the Football Bowl Subdivision was also a draw.

“I saw that (Arkansas State) had followed me on Twitter, and I woke up Monday and saw (Jones) had offered me,” Simmons said. “It was a surprise because I was set on Tennessee Tech. I started doing some research, and I took a FaceTime tour of the facility. We decided it was a better fit because of the caliber of the football they play and the coaching I’ll get there.”

“I hope he goes even higher than me because he’s way ahead of me when I was his age,” Simmons said. “Today is great because I put in all that work, and to finally see it pay off motivates me, even more, to try to keep working to make it the next level. I can’t wait to get out there and get stronger and show what I can do.”