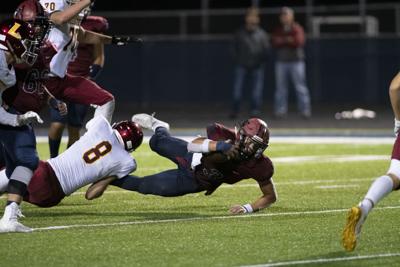 Woodstock and Roswell won big games last week under different circumstances, and both should feel good heading into Friday's Region 4AAAAAAA matchup at the Wolverine Den.

Woodstock (2-6, 1-2) beat Lassiter last week to break into the win column in region play. It posted 446 yards of offense last week -- its highest total all season -- and was led by Andrew Bartolero, who rushed for 217 yards and a touchdown while filling in for injured running backs backs V’ontae Hampton and Willie Grier.

Woodstock coach Brent Budde said Grier will likely be back Friday, while Hampton may be a game-time decision.

“We didn’t have any running backs last week, so Andrew played most every snap for us since he’s our starting middle linebacker, too,” Budde said. “He did a great job for us back there and he’s the type of kid you’re going to have to drag off the field.”

Roswell (5-2, 2-1) is coming off a bye week following an overtime win against Walton two weeks ago. The Hornets, who are tied atop the region with Cherokee, Etowah and Walton, should be rested and focused heading into the final two weeks of the season.

Roswell has the best scoring defense in the region, allowing 8.5 points per game, and it has several Division I players on its roster. Linebackers Khaleed Mobley and John Michael DiRoberto lead the team with 45 tackles apiece, while three-star safety and Arizona State commit Doneiko Slaughter is third on the team with 43 tackles and tied with DiRoberto for the team lead with two interceptions. Caden Bondurant leads Roswell with nine of its 28 sacks this season.

Woodstock will need to stop a powerful Roswell running game. Despite Nnamdi Orjioke and Savion McCrary combining for 11 rushing touchdowns this season, it was North Carolina commit John Copenhaver who led the running game against Walton with 13 carries for 45 yards and two scores.

Offensive tackle Trey Zimmerman, another North Carolina commit, and quarterback Ethan Roberts has been efficient this season, completing 56% of his passes with nine touchdowns.

"They’re probably not going to get too fancy offensively and, obviously, their defense hasn’t given up many points," Budde said. "It's really going to be a test of grit and determination on our part."

Roswell will need to play the pass well against a Woodstock passing game that has continued to show growth each week. Walker Ormsby and Robbie Roper have combined for 1,375 passing yards and 13 touchdowns, while Wes Bruno, DeAndre Turner and Brooks Bortle are all in the top 10 in receptions for Cherokee County.