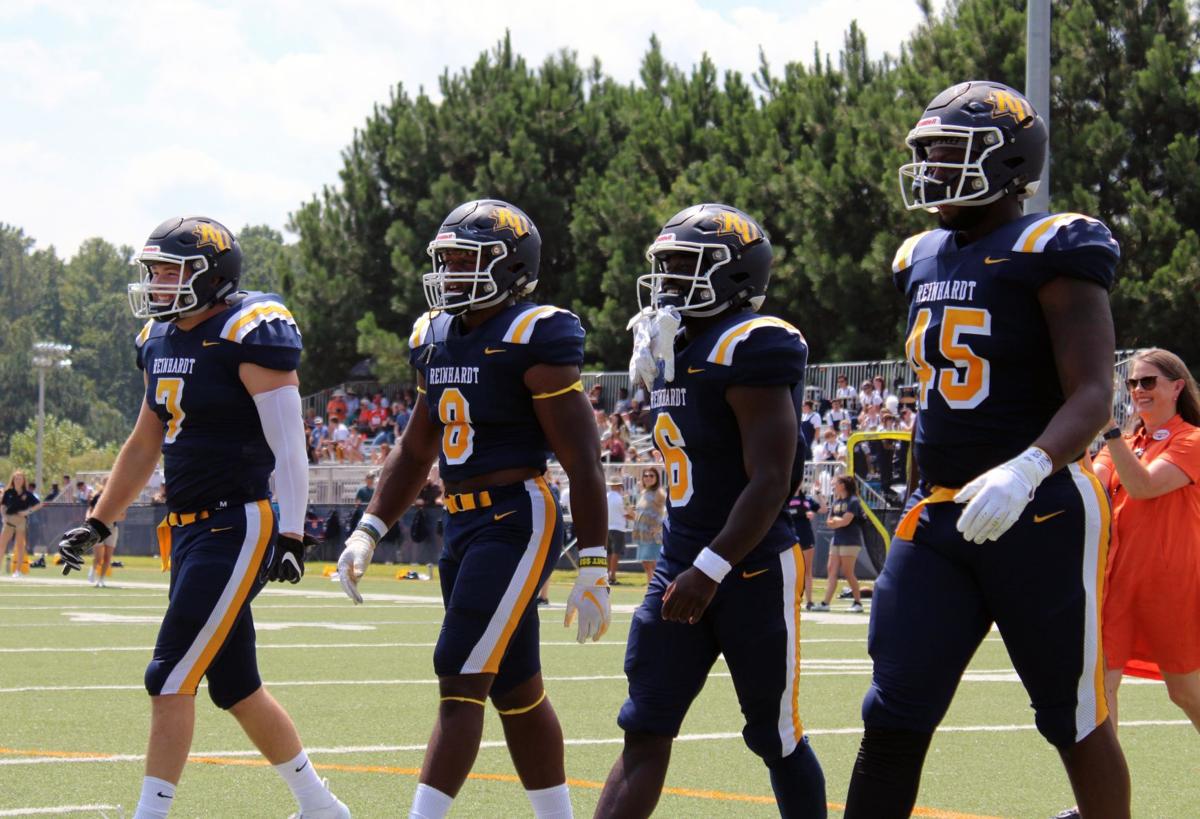 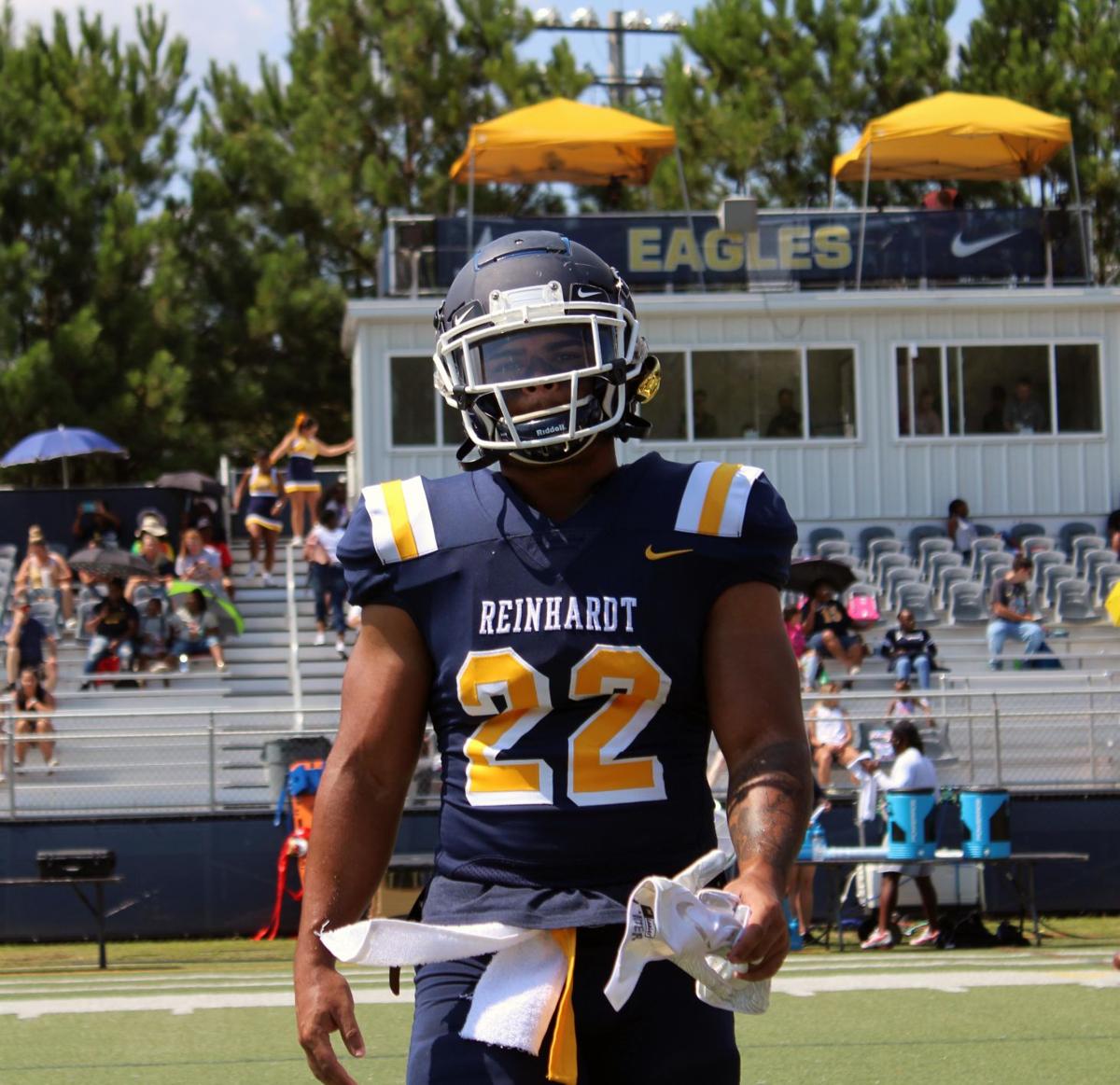 Reinhardt redshirt freshman Devyn Collins warms up prior to a home game earlier this season against the University of Pikeville. 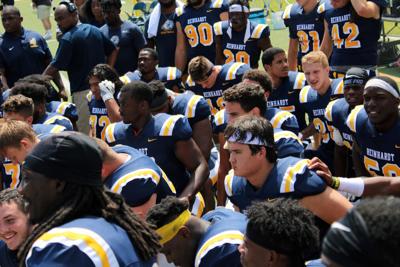 Reinhardt redshirt freshman Devyn Collins warms up prior to a home game earlier this season against the University of Pikeville.

The Eagles played through the wind and the rain last weekend to earn a 19-0 victory at Point, but they face a much more favorable forecast Saturday. The defense earned its second shutout of the season last week and will need to play well again against a St. Andrews team averaging 52 points per game over the last three weeks.

“They run a very unique offense,” Reinhardt coach James Miller said. “It’s a little bit of power and a little bit of spread. They’ll throw it and run it, and they’ve been putting up a lot of points.”

Points came at a premium for Reinhardt last week, after the Eagles’ offense had begun to find its stride in the weeks prior.

Junior quarterback Billy Hall leads the team with 514 rushing yards and 684 passing yards and seems to have found his rhythm in the passing game since the beginning of conference play. A group of five running backs have helped Reinhardt become the No. 7-ranked rushing team in the NAIA at 255 yards per game. Trevae Cain, Montralius Mosely, M’Calun Lanier, Otis Odom and Bryce Burgess are the main cogs in a running game that continues to move closer to the top of the national rushing rankings each week.

Health on the offensive line has been a concern for Reinhardt, and the Eagles will once again be without multiple starters Saturday. Entering the ninth week of the season, Miller hopes the inexperience is beginning to wear off for his backups and other first-time starters.

“We’ll be without three starters and two backups on the offensive line,” Miller said. “I don’t think any of them are nervous about playing anymore. All those types of jitters are gone. Now, it just comes down to whether they can do their job. That’s all we’re asking them to do. We’re not asking them to go out and do any more than that.”

St. Andrews has been balanced offensively, passing for 1,255 yards and rushing for 1,228 yards on season. Most of their scoring plays have come on the ground, however, with running back Trevor McNeil and quarterback Dashaun Ferguson responsible for 12 of the team’s 21 rushing scores.

St. Andrews has played two quarterbacks this season, with Ferguson and Kacey Otto splitting time. Otto is the bigger threat to pass with 749 yards and seven touchdowns, but Ferguson has 433 passing yards of his own with a 61% completion rate.

The Reinhardt secondary will also game-plan for St. Andrews’ two leading receivers, Kashard Cohens and Jermaine Trotman Jr., who have accounted for 49 of the team’s 69 receptions and 931 of the team’s 1,255 receiving yards.

Reinhardt leads the AAC and ranks eighth in the NAIA in opponents scoring average (12.9 points per game), while The Eagles are tied for third in the NAIA in sacks with 26.

The deep and talented Reinhardt defensive line should be prepared to pressure St. Andrews’ quarterbacks, who each present different abilities.

“We might make a few minor adjustments, but we’re not very complex on defense.” Miller said. “We just want to play sound, gap control and allow our guys to play fast and fly around out there.”

A game for the division lead is big in any level of football, and Miller said it is not something the Eagles shy away from.

“We’ve definitely talked about it,” he said. “It’s a big game with a lot of implications in the conference. Guys are expected to step up, and we’ll see if we can do that.”