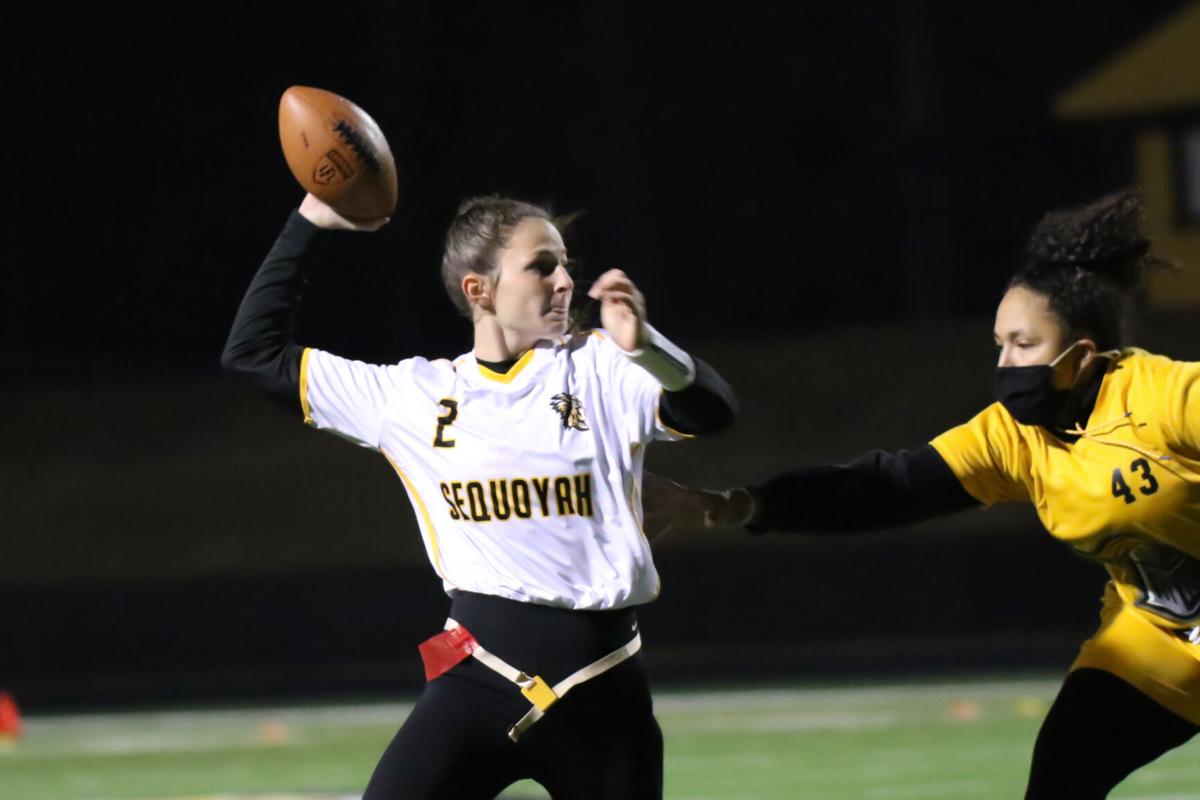 Bailey Hodgins helped lead Sequoyah into Round 2 of the GHSA Class 6A-7A state playoffs with a 34-0 win over Central Gwinnett on Wednesday. 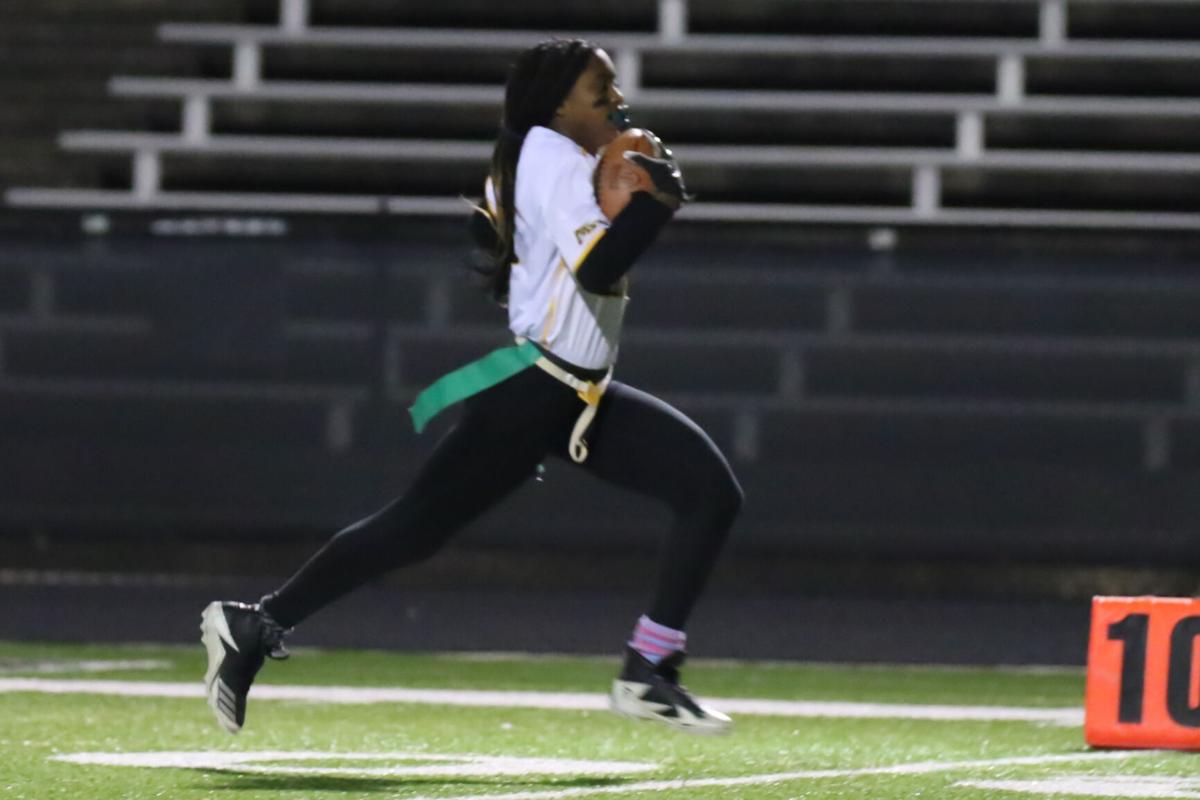 Mya McRae scored touchdowns on the first play of Sequoyah’s first three drives as she helped the Lady Chiefs beat Central Gwinnett 34-0 in the first round of the Class 6A-7A playoffs.

Bailey Hodgins helped lead Sequoyah into Round 2 of the GHSA Class 6A-7A state playoffs with a 34-0 win over Central Gwinnett on Wednesday.

Mya McRae scored touchdowns on the first play of Sequoyah’s first three drives as she helped the Lady Chiefs beat Central Gwinnett 34-0 in the first round of the Class 6A-7A playoffs.

In its first season as a sanctioned sport by the Georgia High School Association, girls flag football has taken hold in Cherokee County.

Wednesday night, four teams competed in the first round of the state playoffs, with three — Sequoyah, Woodstock and Cherokee — advancing to the second round.

The increased attention to the new sport, along with a local pool of talented players, has made Cherokee one of the state’s hotbeds for flag football.

“We learned a lot last year and I think, within the county, it’s been kind of the expression of steel sharpening steel,” Cherokee coach Tom Stringfellow said. “I think we each use each other as a kind of measuring stick.”

The Lady Chiefs scored touchdowns on each of their first three plays from scrimmage, all on long touchdowns runs by sophomore Mya McRae. Sequoyah has also won the county championship in back-to-back seasons and is considered one of the favorites to make a run for the inaugural state title.

“I still think there’s better football to be played,” Sequoyah coach Emily Ryan said. “We have one or two notches to go until we play our best football and, honestly, every team is gunning for us. That’s what I tell my girls. Everyone has a target on our back, and we’ve got to be at the top of our game because everyone wants to take down No. 1.”

One of the team’s two captains and a two-year starter at quarterback, Hodgins finished 8-for-11 passing while running for one extra point.

The passing game was not needed Wednesday night, but Hodgins’ ability from the pocket is impressive. The senior finished 15-for-21 passing in Sequoyah’s 27-0 win over Woodstock in the area championship.

“I think, over the last few games, we’ve been excelling, and I feel really good about our chances going into the playoffs,” Hodgins said. “Last year was starting from the ground up because we had to learn the whole game of football. This year, it’s been much easier. We aren’t making those simple mistakes we made last year. I’m very confident in my receivers as well as my line. When we release off the line, I feel like we’re unstoppable.”

Sequoyah will host South Forsyth at 6:30 on Tuesday, while Woodstock will face Lambert at 5:30 in another second-round matchup.

The Lady Wolverines (5-2-1) entered the playoffs as the No. 4 team in the 6A/7A rankings and advanced to the second round following a 12-0 defeat of Dacula. Maddie Blanchard and Jamie Stark scored Woodstock’s two touchdowns.

Cherokee (4-2-2) entered the playoffs ranked No. 9 and advanced to the second round with a 12-0 win over South Gwinnett. Julia Wilson connected with Celan Trowers for the two Cherokee touchdowns, while Haleigh Cianchetti also had big night with multiple first down receptions. Lilly Stock recorded an interception for the second straight game, giving her five on the season.

Cherokee will travel to Forsyth Central (11-0-1) on Tuesday, with the game set to begin at 8 p.m.

Cherokee County has seen an overwhelming interest in the sport and the district could adopt a junior varsity schedule next season.

“I think this sport will definitely continue to grow. This county has so many female athletes,” Stringfellow said. “Half of Cherokee is in the top 10, and our girls want to practice. This is not powder puff. It’s an organized sport for athletes. We run a high-skill-level offense, and they want to learn the sport. It’s all new to them and they soak it up like a sponge. They’re really quick learners.”

River Ridge, the fourth county team to advance to the playoffs, lost 25-0 to Grayson.