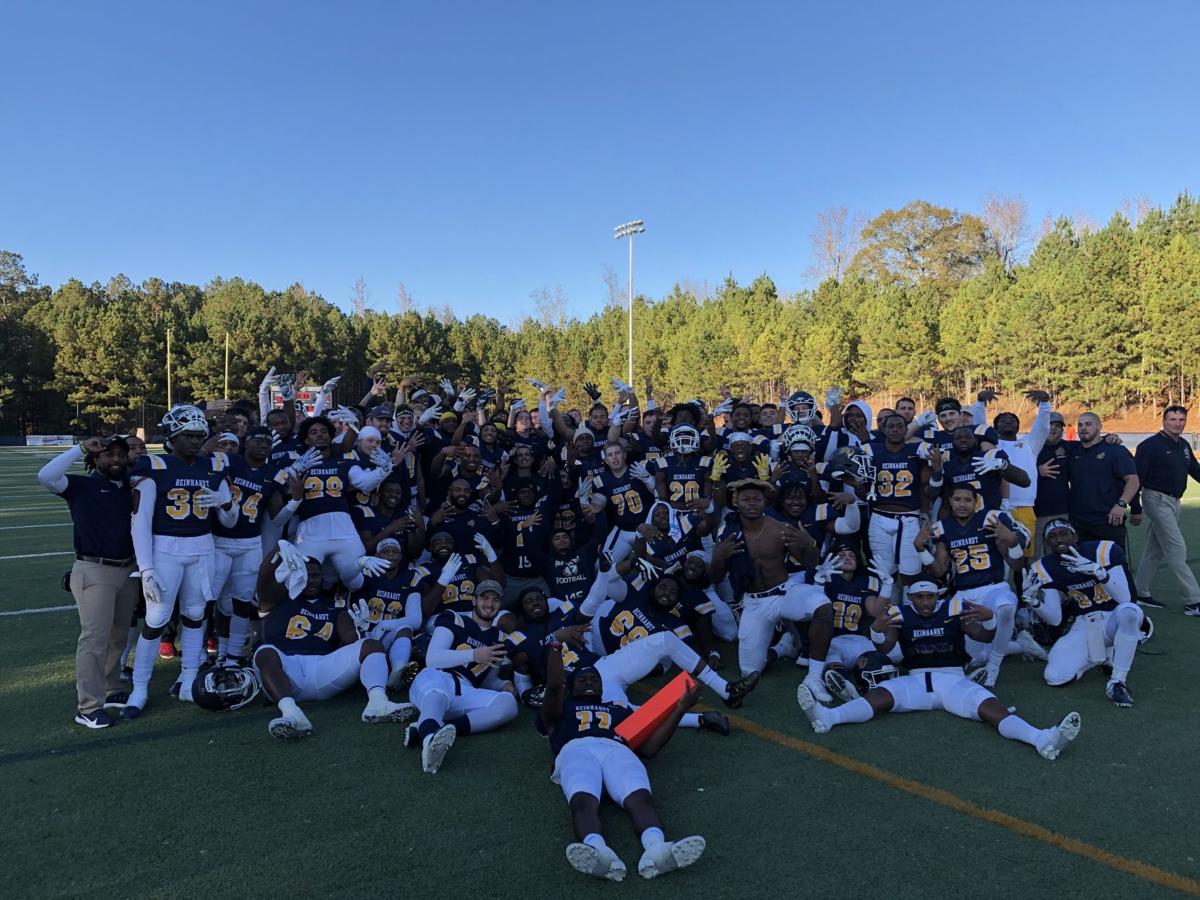 Players and coaches for Reinhardt pose in celebration of the program's fourth consecutive division championships in the Mid-South Conference. 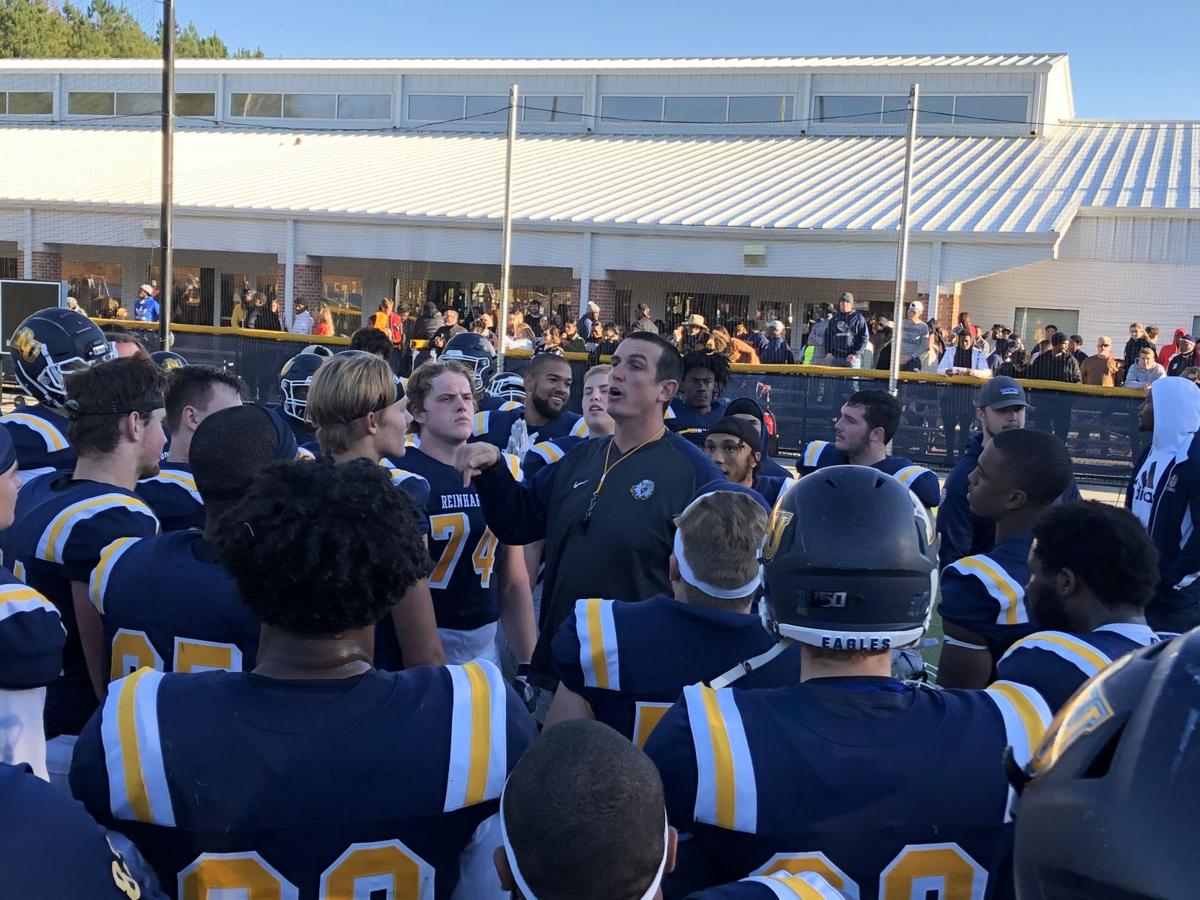 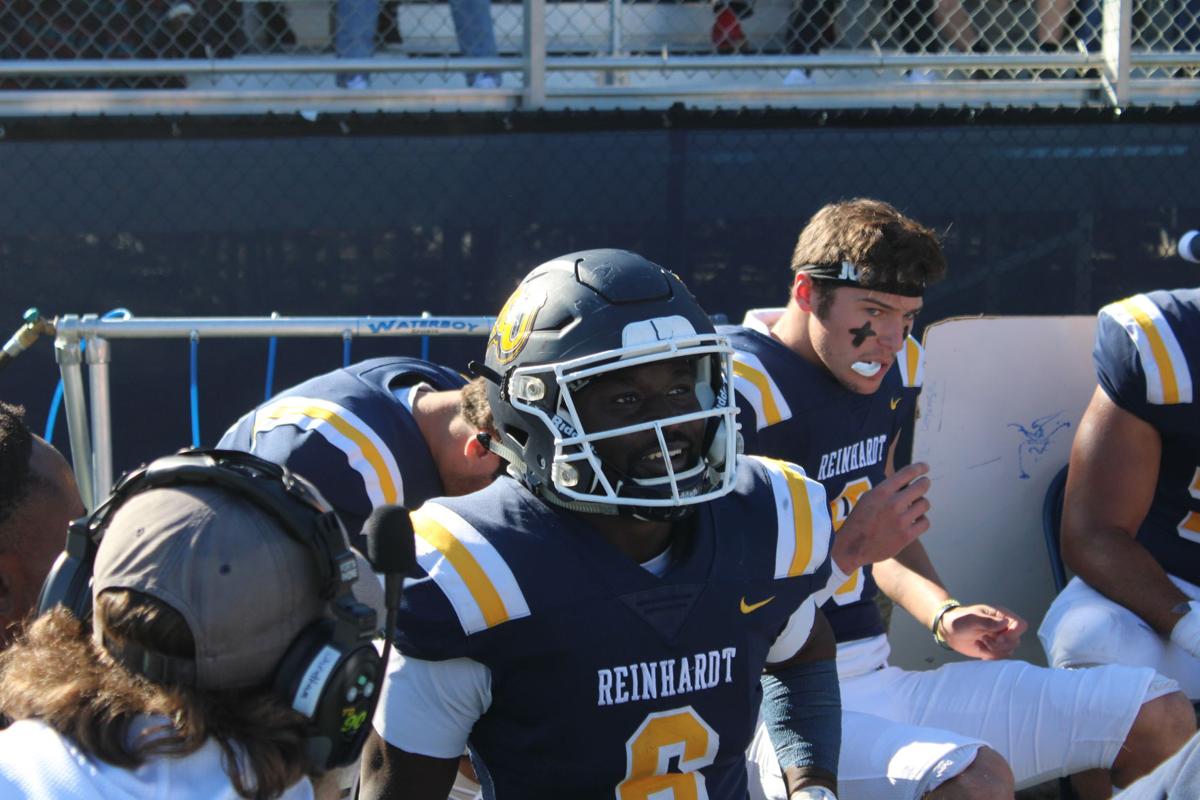 Reinhardt running back Montralius Mosley rushed for 114 yards and three touchdowns in Reinhardt's 63-0 win over Union College (Ky.) on Saturday in Waleska. 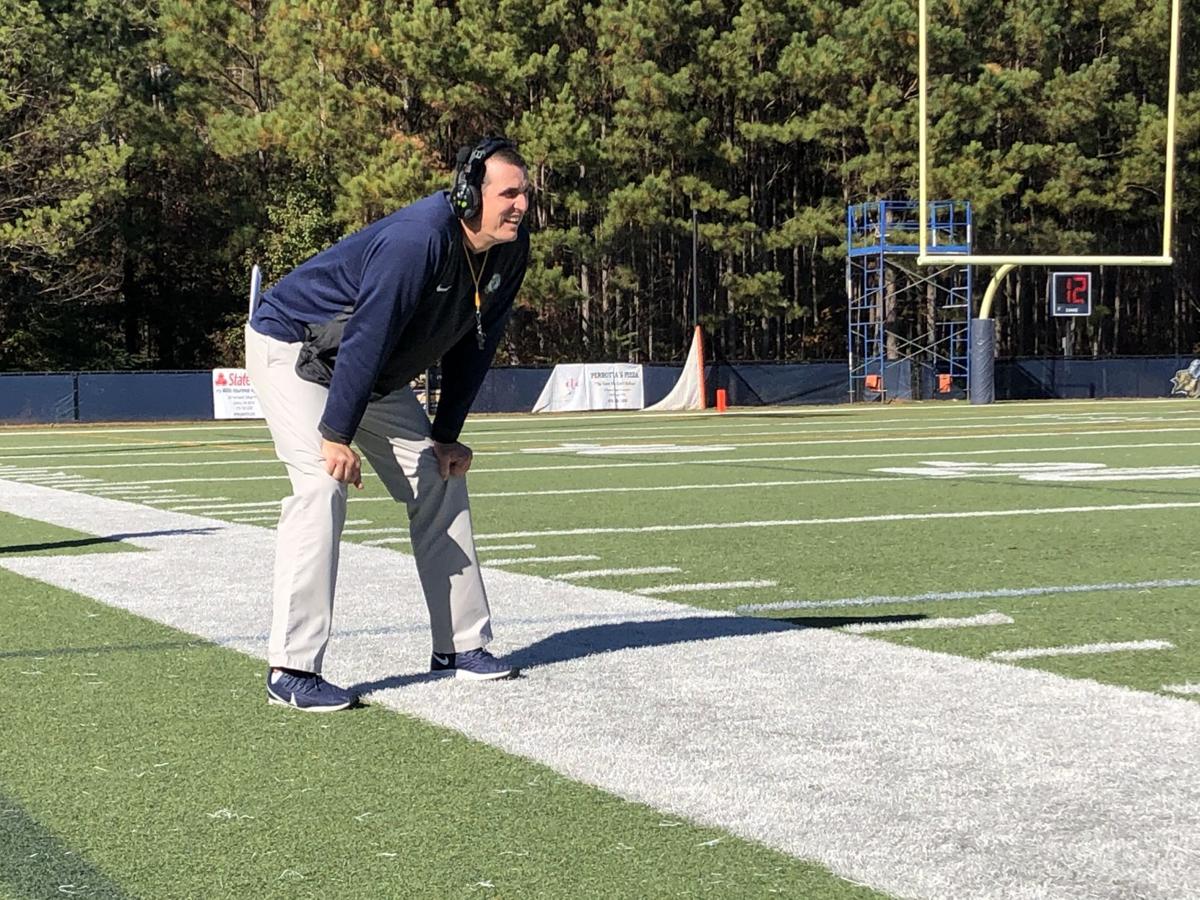 Reinhardt coach James Miller watches from the sideline on Saturday in Waleska. 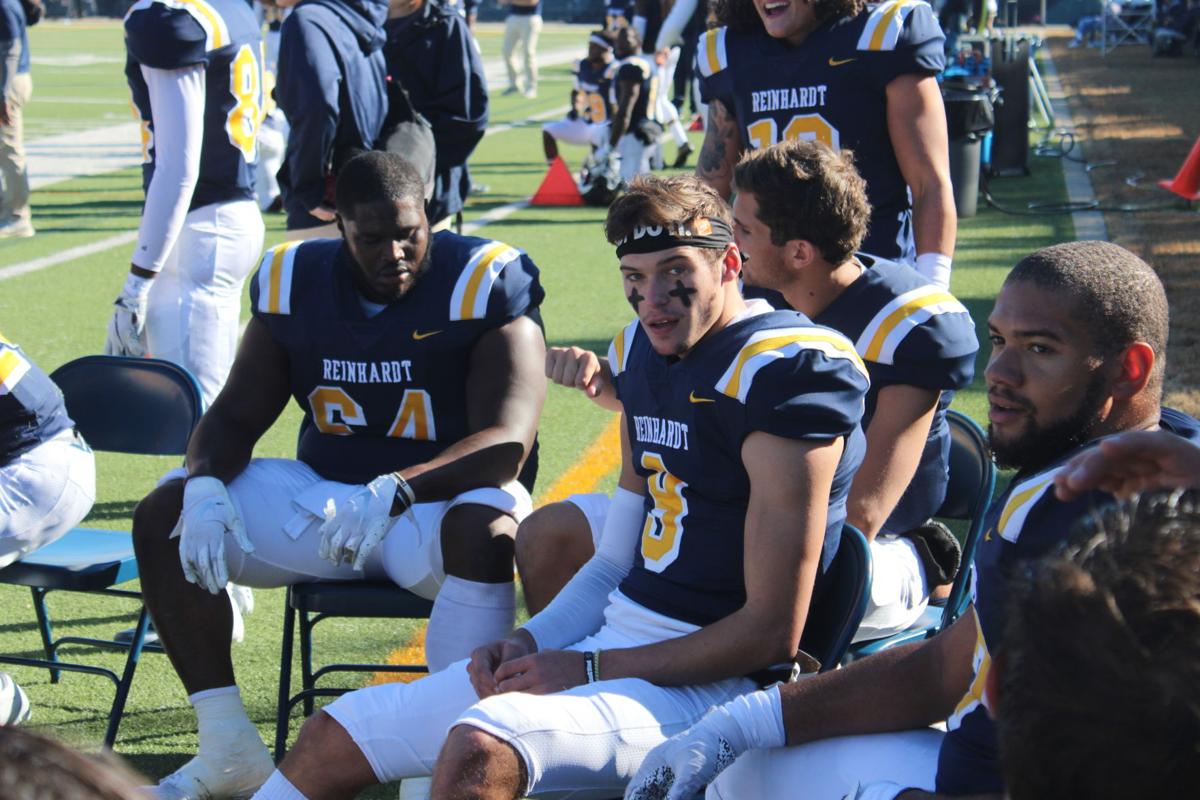 Reinhardt quarterback Billy Hall (9) finished 3-or-5 passing for 70 yards with one touchdown in Reinhardt's 63-0 win over Union College (Ky.) on Saturday in Waleska. 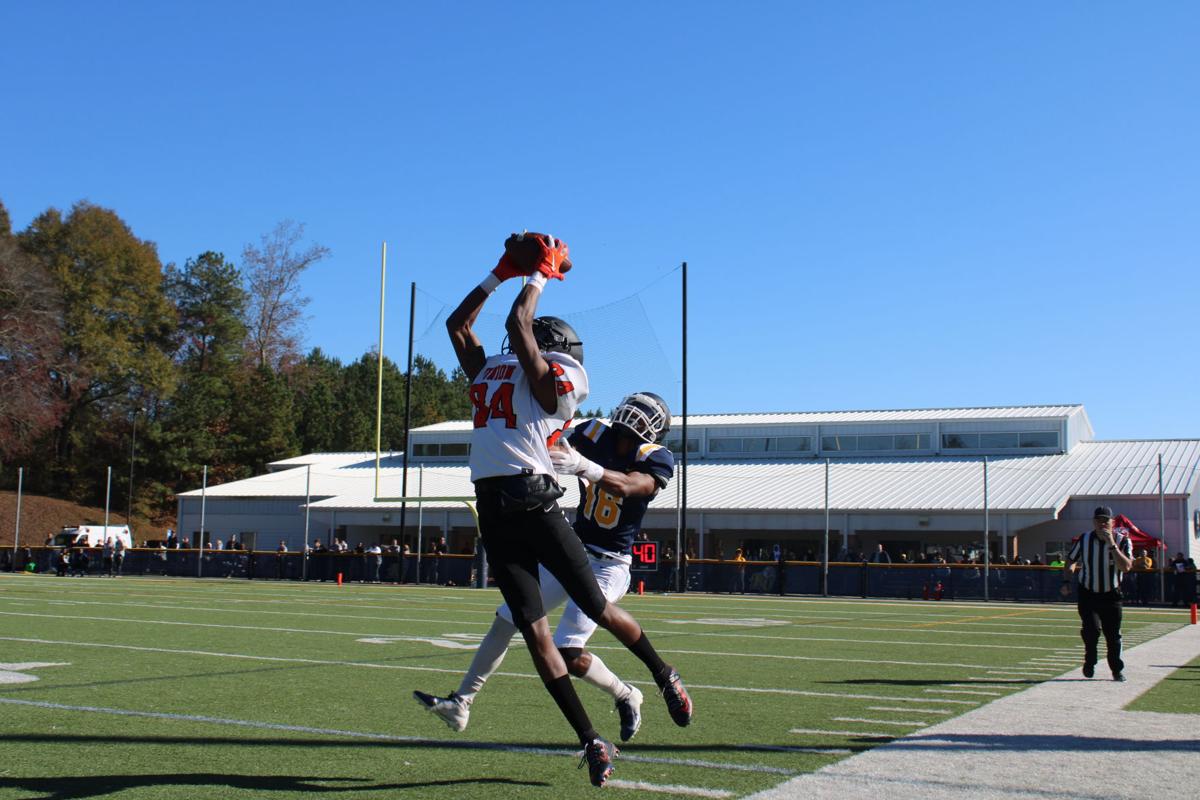 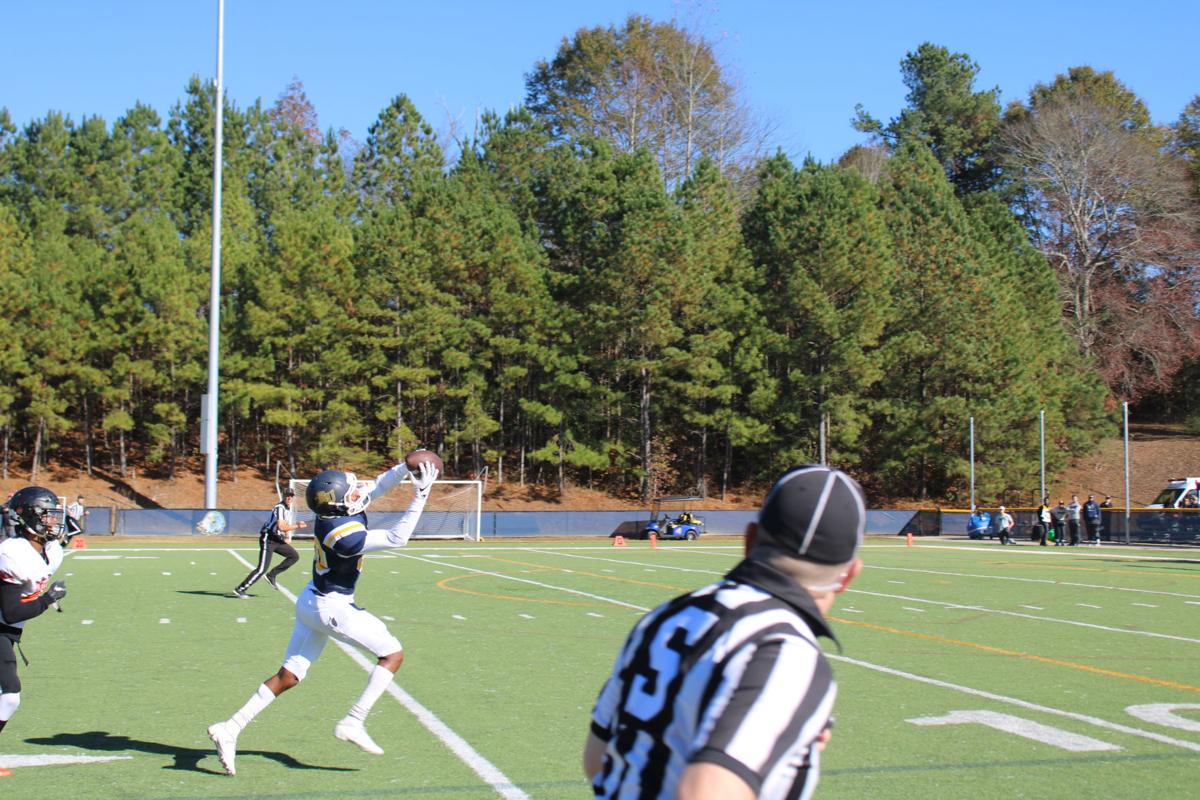 Reinhardt freshman Navarie Solomon hauls in a 60-yard touchdown in the first quarter of Reinhardt's 63-0 win over Union College (Ky.) on Saturday in Waleska. 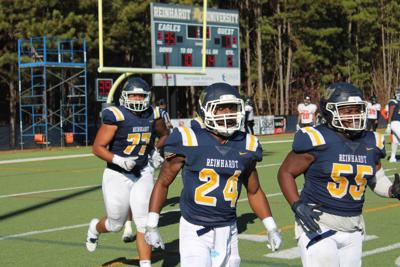 Players and coaches for Reinhardt pose in celebration of the program's fourth consecutive division championships in the Mid-South Conference.

Reinhardt running back Montralius Mosley rushed for 114 yards and three touchdowns in Reinhardt's 63-0 win over Union College (Ky.) on Saturday in Waleska.

Reinhardt coach James Miller watches from the sideline on Saturday in Waleska.

Reinhardt quarterback Billy Hall (9) finished 3-or-5 passing for 70 yards with one touchdown in Reinhardt's 63-0 win over Union College (Ky.) on Saturday in Waleska.

Reinhardt freshman Navarie Solomon hauls in a 60-yard touchdown in the first quarter of Reinhardt's 63-0 win over Union College (Ky.) on Saturday in Waleska.

WALESKA — In a must-win situation, Reinhardt put forth its best effort of the season.

Reinhardt defeated Union College (Ky.) 63-0 at Ken White Field at University Stadium on Saturday afternoon and won its fourth consecutive division championship in the Mid-South Conference in the process. The No. 13-ranked Eagles (9-2, 6-0) won the Appalachian Division for the second year in a row and are now set to travel to Indianapolis on Saturday to face No. 2 Marian University (9-0) in the first round of the NAIA Football Playoffs. Kickoff is set for for 1:05 p.m. EST.

Saturday was homecoming and senior night for the program, and Reinhardt coach James Miller said his goal this week was to have his team playing its best football heading into the postseason.

Saturday’s performance went about as well as he could have asked.

Mosley was as explosive as he has been all season, scoring on runs of 10, 20 and 56 yards. Reinhardt entered the game off consecutive bye weeks and the added rest seemed to benefit the Eagles’ players.

“I feel like this is the healthiest I’ve been all year,” Mosley said. “I was able to get my legs back underneath me, reset, and get my mind refocused. For the first time in a long time I felt good out there and it showed today.”

For Reinhardt’s second touchdown, quarterback Billy Hall connected with freshman wide receiver Navarie Soloman on a 60-yard touchdown pass. Displaying the ability to stretch the defense vertically with the passing game bodes well for a team with the No. 4-ranked rushing offense.

“It was really good to see us connect on that,” Miller said.

“Beautiful throw, beautiful catch and Navarie (Solomon) finished it. That’s what we’re going to need because when you get to the playoffs you’re going to have to be able to throw the ball and complete passes to win.”

Leading 14-0, Reinhardt’s Bryce Atchison blocked a Union punt attempt and Jahari Boone returned the loose ball down to the Union one-yard line. One play later, senior offensive lineman Tre Coney took a handoff and barrelled into the endzone for the first touchdown of his career at any level. It was a moment Coney had been waiting for all season.

“I’ve been telling coach all year that I needed the ball, so he put a play in there for me,” Coney said. “I’m fortunate enough that they called my name and I got it in. It felt great, and honestly I’m still thinking about it right now.”

It was the third shutout of the season for the Reinhardt defense. The Eagles recorded three sacks, 10 tackles for loss and forced two takeaways, one by fumble and one on a Bryce Ford interception. Even playing as a heavy favorite over Union (0-10, 0-6), junior linebacker Sebastian LeGarra said Saturday’s performance was a perfect was to end the regular season.

“It was a great way to end the regular season for the seniors,” LeGarra said. “We’re excited to find out who we’re going to play in the first round of the playoffs. It’s time to get serious now because this is when it gets real.”

Reinhardt rested many of its starters in the second half and many of the seniors stayed on the field after the game for pictures with friends and family. The Eagles will likely jump in next week’s rankings but will undoubtedly be on the road for the first round of the playoffs, as only the top eight teams are guaranteed first round home games.

After consecutive losses earlier this season Reinhardt’s playoff hopes seemed possibly in doubt, but Mosley said the leaders on the team never let the adversity affect the team’s focus. Several of the upperclassmen on this year’s team remember the program’’s run to the national championship game in 2017 and now with the regular season behind them, the leaders are rallying the team to make another postseason run.

“It’s been a long season and I feel like a lot of people have been counting us out,” Mosley said.

“We’ve been the underdogs this season, but that’s what you want as a team because now we can go into the playoffs and make some noise.”