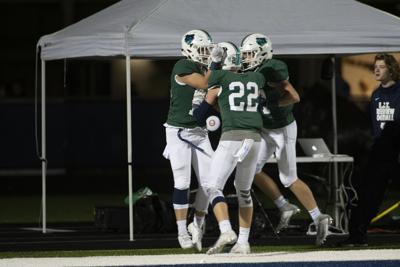 One team will be looking to secure its playoff position, while the other will be hanging on to its playoff hopes when Creekview hosts Sprayberry on Friday.

A win for Creekview (6-2, 4-2) would all but guarantee a playoff spot out of Region 6AAAAAA with two weeks remaining in the regular season. Meanwhile, Sprayberry (4-4, 3-3) needs to win to keep its playoff hopes alive, and a loss would make it very difficult for the Yellow Jackets to jockey above Dalton or Creekview with only two weeks remaining.

Creekview is coming off a shutout victory over South Cobb last week and has outscored its opponents 79-20 over the past three weeks.

The matchups in the trenches will be the ones to watch Friday.

Sprayberry defensive end Marlon Krakue and Creekview offensive tackle John Williams are both three-star recruits according to the 247Sports composite rankings for the class of 2020, while Sprayberry offensive lineman Jake O’Buck, a two-star recruit, should provide a good test for the Creekview defensive line.

Creekview held South Cobb to 33 yards of offense last week and has been the best team in Cherokee County in terms of pressuring the quarterback. The Grizzlies have 39.5 sacks this season, with freshman Isaac Hubert leading the way at 8.5.

“That’s kind of been our biggest surprise this year,” Creekview coach Trevor Williams said. “We knew we had some experience coming back at linebacker, but we were a little young up front defensively. It’s been fun to watch them pin their ears back and get after it.”

Brody Rhodes continues to be one of the most productive quarterbacks in Cherokee County, and the depth of the Creekview receiving corps is beginning to show itself as well. Rhodes connected with Dawson Currie for two touchdowns last week and with Andrew Cloy for a third.

Six different players have caught touchdowns for Creekview this year, including Ethan Dirrim who leads Cherokee County with eight.

“We kind of figured out early on we had some playmakers out there,” Williams said. “They’re really an unselfish group. They don’t care who gets the ball, and it's always fun to coach groups like that.”

Sprayberry’s running back Damarion Owens, Cobb County’s leading rusher, was held to 34 yards last week while dealing with an ankle injury, but coach Brett Vavra said the powerful junior should be back to full strength Friday.

Josh Bush, who has 344 rushing yards and 515 receiving yards, has been a threat from both the slot and as a change-of-pace back alongside Owens.

Vavra said Creekview will present challenges on both sides of the ball and added his team knows what is at stake on Friday.

“Brody and Ethan, those two kids are really good football players,” Vavra said. “I think the key to the game will be stopping them. We know, in order to do what we want to do, we’ll have to beat Creekview, and we’ll have our hands full.”