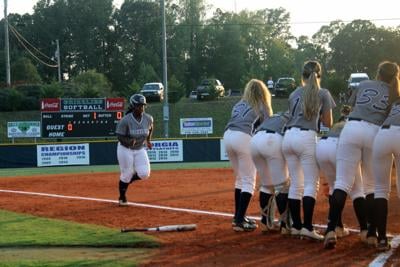 CANTON -- Despite playing in a new position at a new school, Ari Wright’s introduction to Cherokee County softball was heard loud and clear.

The junior right fielder played her first season at Creekview and her first ever in the outfield this fall, but the new circumstances had no adverse effects. Wright transferred to Creekview from Allatoona last spring and made her impression felt immediately this fall, finishing the year as Cherokee County’s leader in home runs (14), RBIs (48) and runs scored (44).

Wright, who batted .488 with a county-best 1.590 OPS (on-base percentage plus slugging percentage), is the 2019 Cherokee Tribune Softball Player of the Year.

“I think it's great,” Wright said. “I’ve never won an award like this in high school. It’s cool because it’s a county award and not just my travel team. I knew it was going to be different this year, but I knew the program was steady, and if we all just do our jobs, we’ll be fine.”

In the Region 6AAAAAA championship game, Wright’s solo home run in the first inning seemed a microcosm of her season at the plate. On a 2-1 count, Wright belted a rising line drive, clearing the scoreboard and making its way onto Owens Store Road, well-beyond the left-center-field fence. In practice this season, Wright had hit Owens Store Road on the fly.

While many players hit home runs, few connect with pitches with the same force as Wright.

Wright's play was an integral part of Creekview’s sixth region championship, and its first since 2016. Creekview coach Jennifer Maloney was also in her first year at the school and said Wright's physical abilities are not something coaches see all the time.

“She’s strong. I mean, she’s a very strong person,” Maloney said. “I have her in weight-training, and just seeing her max-out numbers for bench and squat are unreal. She has the power to hit it over the fence, but she also just puts the ball in play a lot. She just came up clutch in a lot of situations this year.

“She’s not an outfielder, but she was willing to learn the position, and she came out and made some plays out there, too. We have a lot of good young players coming back, and it’s really exciting to see that our program is only going to continue to grow.”

Wright committed to Virginia Tech in September and said she plans to study molecular biology once in college. She still has a year left in high school and, after posting the numbers she did this fall, she said she is excited about the possibilities in 2020.

“We were so young this year with one senior and five juniors, and for us to make state this year, I was really proud of that,” Wright said. “Me and Emily (Wilkie) were the only players on the team who had ever made it to state, ever played in a championship game there. The fact that we were able to get to state with a really young team is a good sign for next year.”