The Latest: Spain reports no deaths in 1st since March 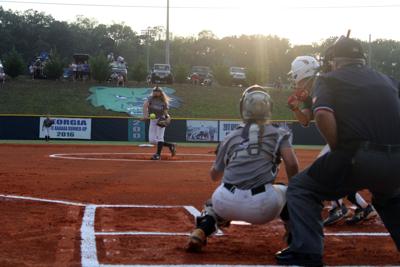 CANTON - It would only be natural for a freshman to feel a bit uncertain playing any varsity sport, but it did not take long for Anslie Pettit to quiet those nerves.

Serving as Creekview’s primary pitcher for the entirety of the season, Pettit was nothing short of brilliant during her first season of high school softball. The right-hander pitched 143 of Creekview’s 206 innings this year and led Cherokee County with a 21-3 record, a 1.56 ERA and a .958 WHIP (walks plus hits per inning pitched).

Pettit's 7.9 strikeout-to-walk ratio (166 strikeouts, 21 walks) also led the county and was better than the next two best pitchers combined.

Pettit, who set the bar for her high school career, is the 2019 Cherokee Tribune Softball Pitcher of the Year.

“I thought I did really good this year, and I’m really excited to come back next year and improve,” Pettit said. “I was really nervous coming into this year because I knew a couple of the girls, but I didn’t know a lot of them. When Emily (Wilkie) approached me and encouraged me to start talking to everyone and getting to know them, that really helped me. She was really my biggest help with feeling more confident.”

Wilkie’s positive words, along with encouragement from coaches and teammates, seemed to work for Pettit -- not only initially, but also as the season progressed. When Pettit did find herself in a jam with runners on base, a visit in the circle from the infielders and coach Jennifer Maloney usually did the trick. More often than not, Pettit pitched her way out of the jam.

For any pitcher on any level, composure is often equally as important as velocity and movement.

“Just watching her on the mound this year, you couldn’t tell she was a freshman,” Maloney said. “She had great composure and kept a poker face all season. Whether things were good or bad, you really couldn’t tell. As a pitcher, especially for a freshman, she showed a lot of maturity out there.”

Pettit said her arsenal includes a fastball, changeup, curveball, drop curveball, drop ball, rise ball, screwball and a Chinese changeup. Maloney called the pitches for Creekview's pitchers this year, and there were plenty of options with Pettit.

“I threw a lot of drop curves this year,” Pettit said. “There were a couple games where I thought one pitch was working better than the others, but, most of the time, I thought I all worked pretty well.”

Having such success at an early age can be a two-sided coin. While the talent is there in Pettit, both she and Maloney said they have already put this season behind them and are focused on improving. Pettit said she wants to improve her velocity and movement, while Maloney said she challenged Pettit in postseason meetings to not become complacent.

Pettit was a key cog for Creekview, en route to its sixth region championship. With Pettit and 2019 Cherokee County Player of the Year Ari Wright both set to return next fall, there is no telling what the ceiling can be for Creekview.

“I mean, we have three more years with (Pettit),” Maloney said. “That’s what exciting. The next few years are going to be very exciting to see how we grow as individuals and also as we grow as a team. I’m excited to see what her future holds as far as college opportunities and also to see what kind of further success she can have in high school ball.”