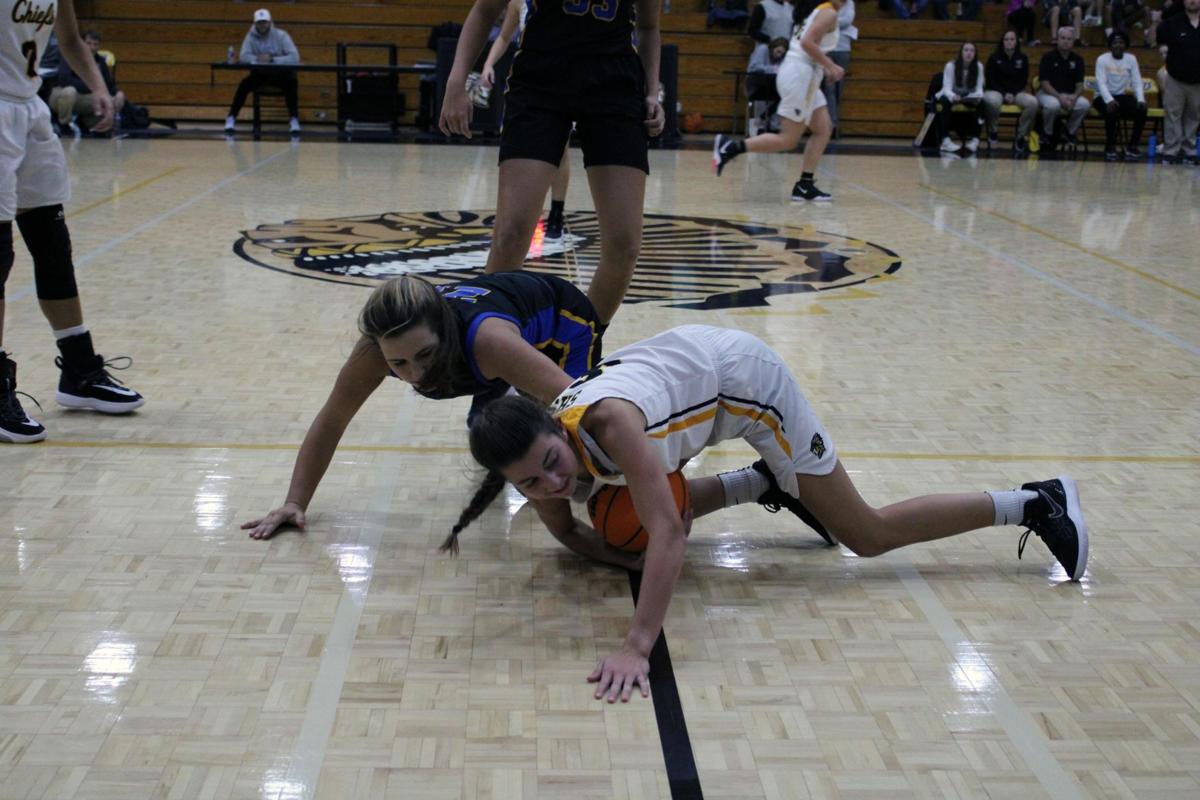 Sequoyah’s Susanna Rogers, front, and Etowah’s Maggie Messerly dive on the floor for a loose ball during Tuesday night’s game at the War Lodge. 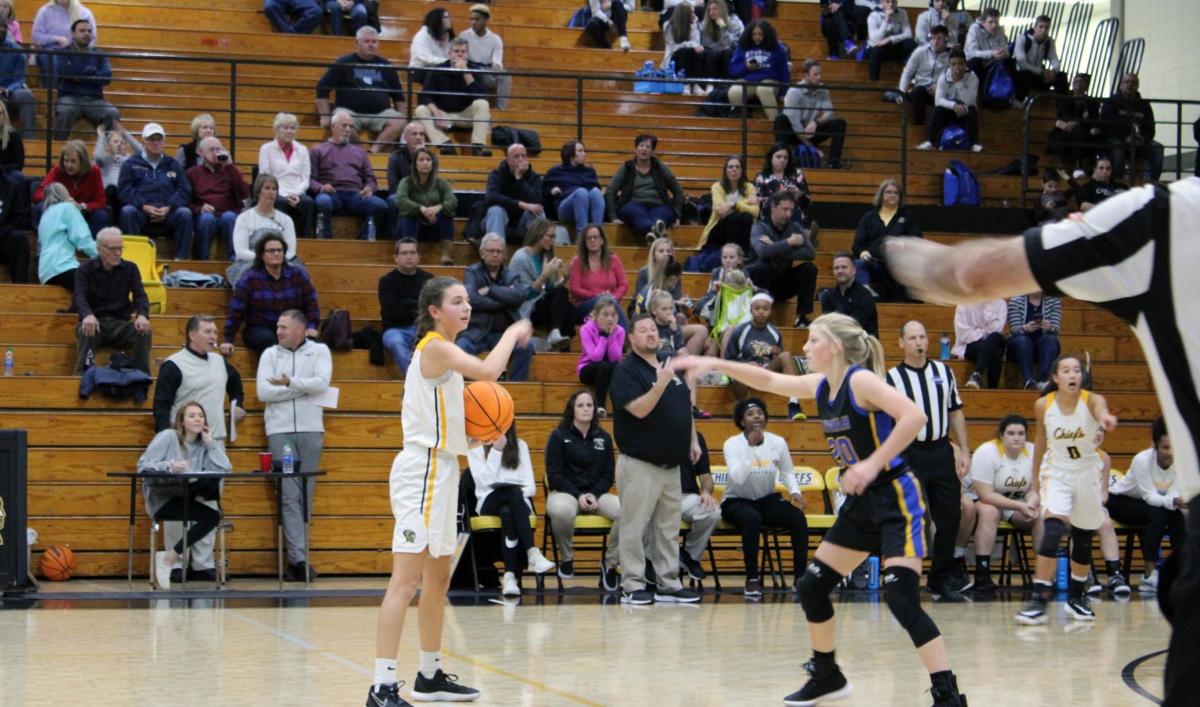 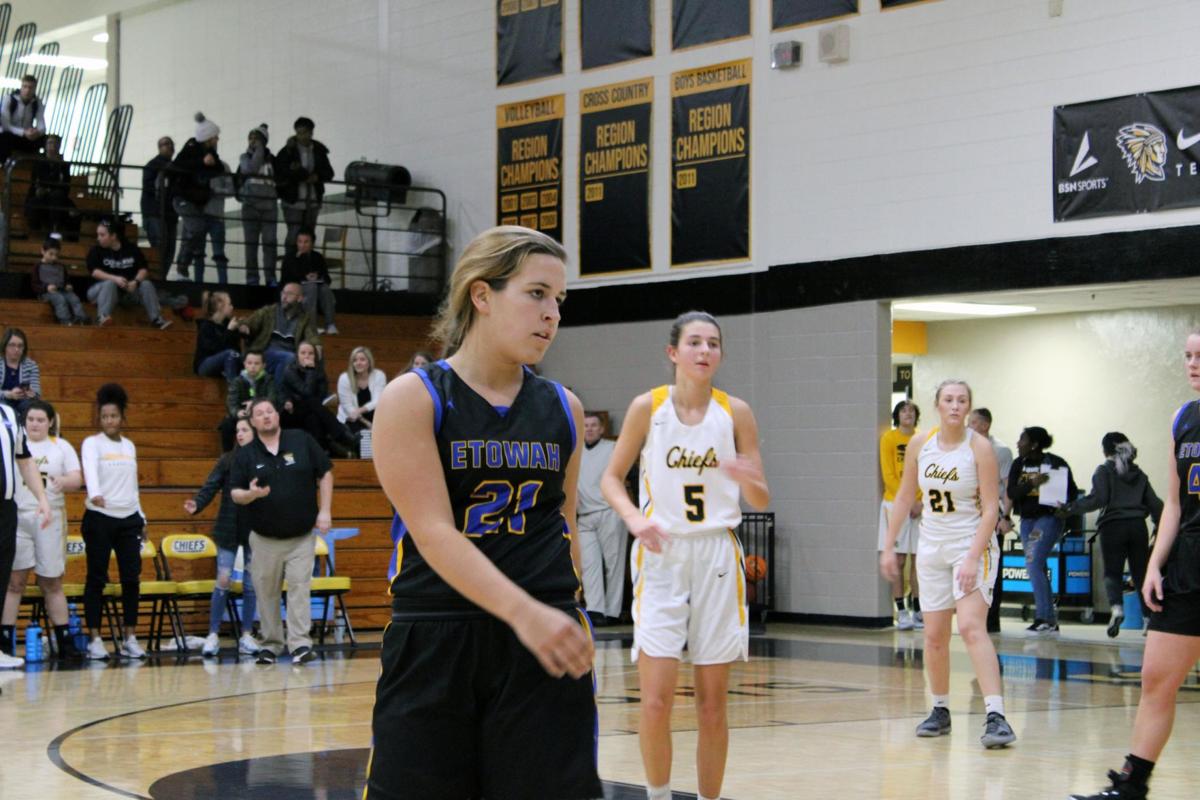 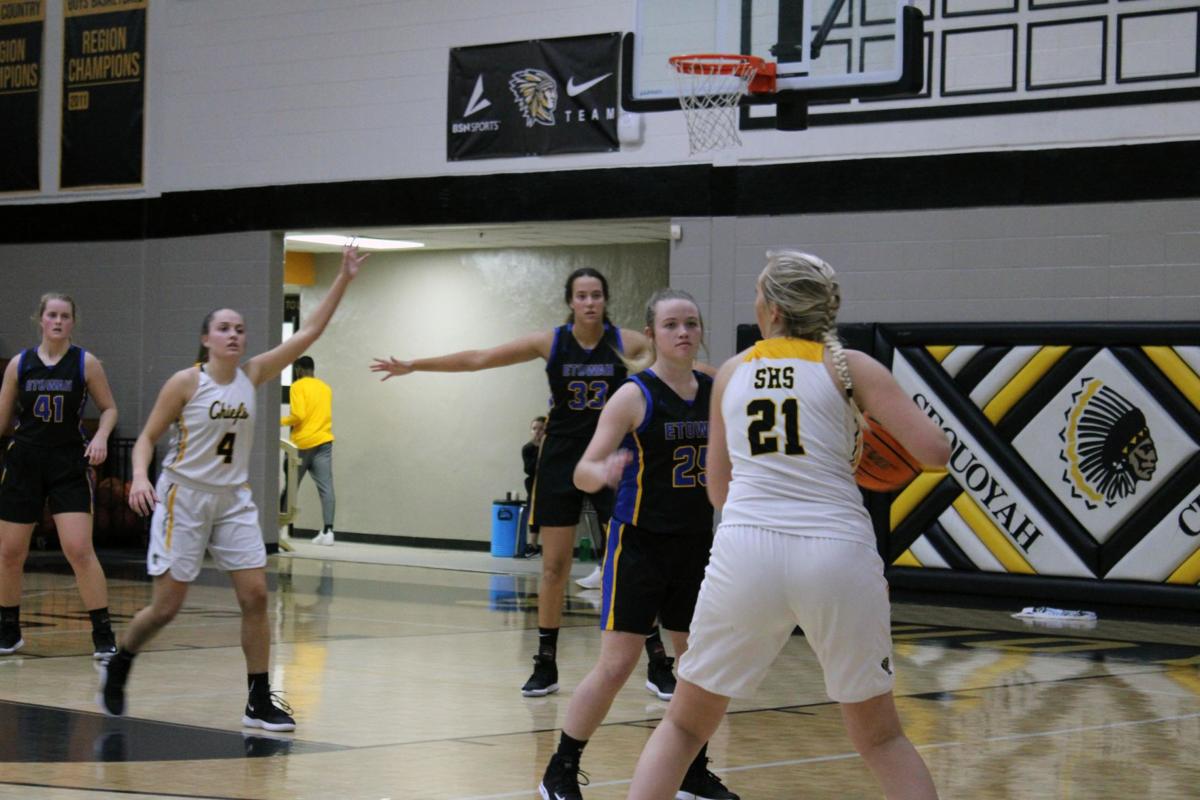 Sequoyah's Kayli Hamby (21) looks for a teammate during Sequoyah's 55-49 win over Etowah on Tuesday night.

Sequoyah’s Susanna Rogers, front, and Etowah’s Maggie Messerly dive on the floor for a loose ball during Tuesday night’s game at the War Lodge.

Sequoyah's Kayli Hamby (21) looks for a teammate during Sequoyah's 55-49 win over Etowah on Tuesday night.

CANTON — Despite playing without two starters, Sequoyah beat Etowah 55-49 on Tuesday at the War Lodge, earning one of its best wins of the season.

“It was a good win for us,” Sequoyah coach Chris Yarbrough said. “We’d really been struggling and we didn’t shoot the ball well last Saturday, so we were just trying to find something positive. We knew we were going to be down two starters tonight, but I thought we did a really good job or next person up, and I think that was a big key for us.”

Sequoyah was without starting guards Elle Blatchford and A’ryn Jackson, but that didn’t prevent the Lady Chiefs from using their full-court press defense to help speed up Etowah from the opening tip.

Sequoyah started out hot, sinking its first four field goal attempts and building a 10-2 lead early in the first quarter. The Lady Chiefs held an 18-13 lead after the first, but Etowah connected on seven 3-pointers in the first half to give it a 27-26 lead at halftime.

Susanna Rogers looked ready and able to fill the scoring void for Sequoyah, as the sophomore finished with a game-high 16 points while taking high-percentage shots while under control. Rogers shot 7-for-10 from the field and 2-for-3 from 3-point territory while adding four rebounds, two assists and two steals.

Sequoyah recorded 18 steals in the game, which helped it get out and running.

“We pressed a little bit so far this season. We’ve been working on it more in practice,” Yarbrough said. “We just think it’s the best way for us to cause havoc. We don’t have a lot of size, and it seems like every team we play has size, so we’ve got to do something to speed teams up.”

Etowah’s largest lead came 36-28 early in the third quarter, but Sequoyah continued to pressure the Lady Eagles and climbed back into the game. Sequoyah led 43-38 and the end of the third.

Etowah’s 3-point shooting kept it in the game and nearly helped lead it to victory. The Lady Eagles made nine 3-pointers in the game with Jada Peterson, Maggie Messerly and Kiersten James each recording three apiece.

James finished with a team-high 11 points.

Etowah cut Sequoyah’s lead to 45-41 midway through the fourth quarter, but back-to-back baskets by Rogers and free throws from Macy Williams and Tatum Dondanville helped extend the lead over the final few minutes.

Yarbrough said he was pleased with the effort from his team following disappointing performances last week. The added bonus of shooting a higher percentage was also welcomed with open arms.

“We really struggled last week with shooting the ball,” Yarbrough said. “It was great to get off to a hot start, and I think that really gave us some confidence.

“Susanna played really well. We were looking for someone to step up, and she did a good job for us, but we want to be multifaceted. Kayli hit a couple 3s, and Macy hit a couple. As teams continue to dare us to shoot with zone defenses, we can start to get them out of that and begin to really use our speed and quickness to our advantage.”

Sequoyah will travel to South Cobb at 6 p.m. Friday, while Etowah will play at 6 p.m. at Kennesaw Mountain.