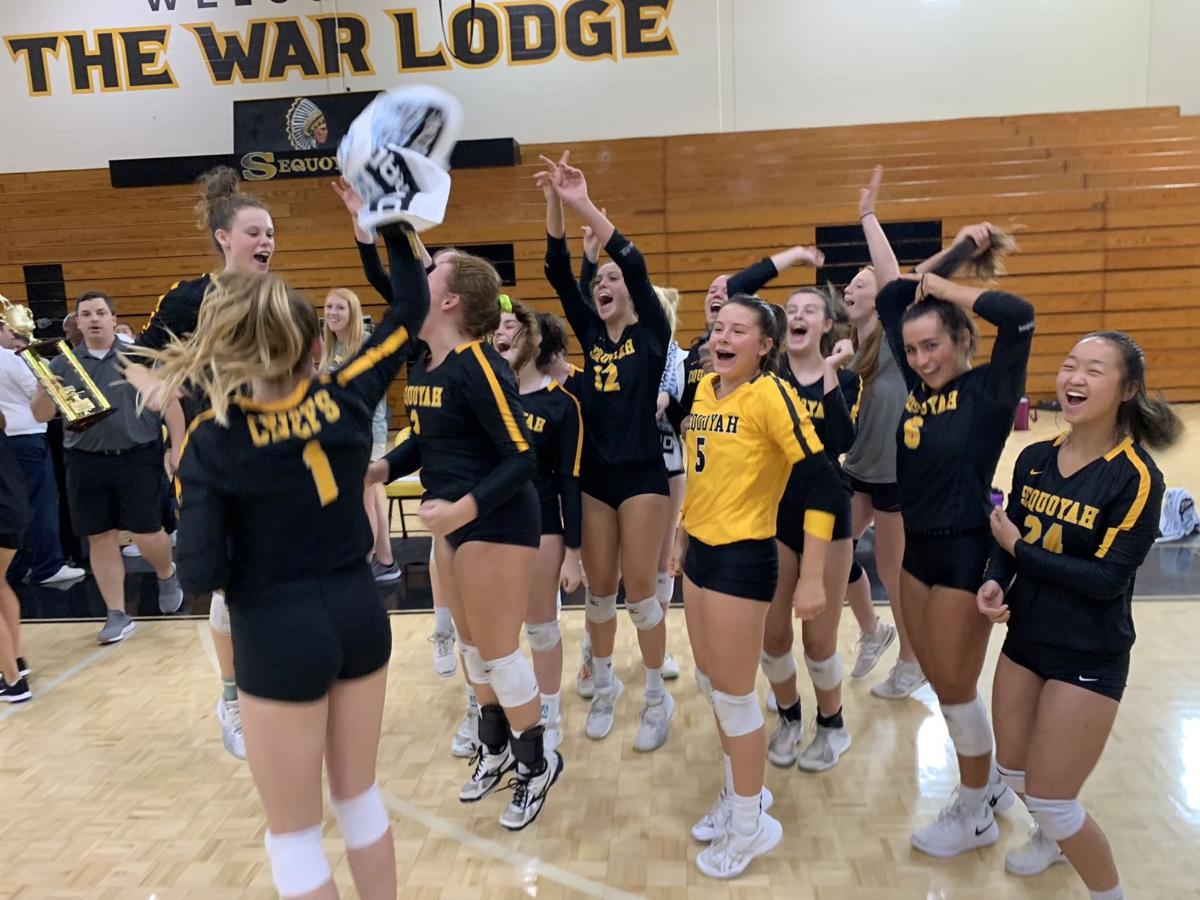 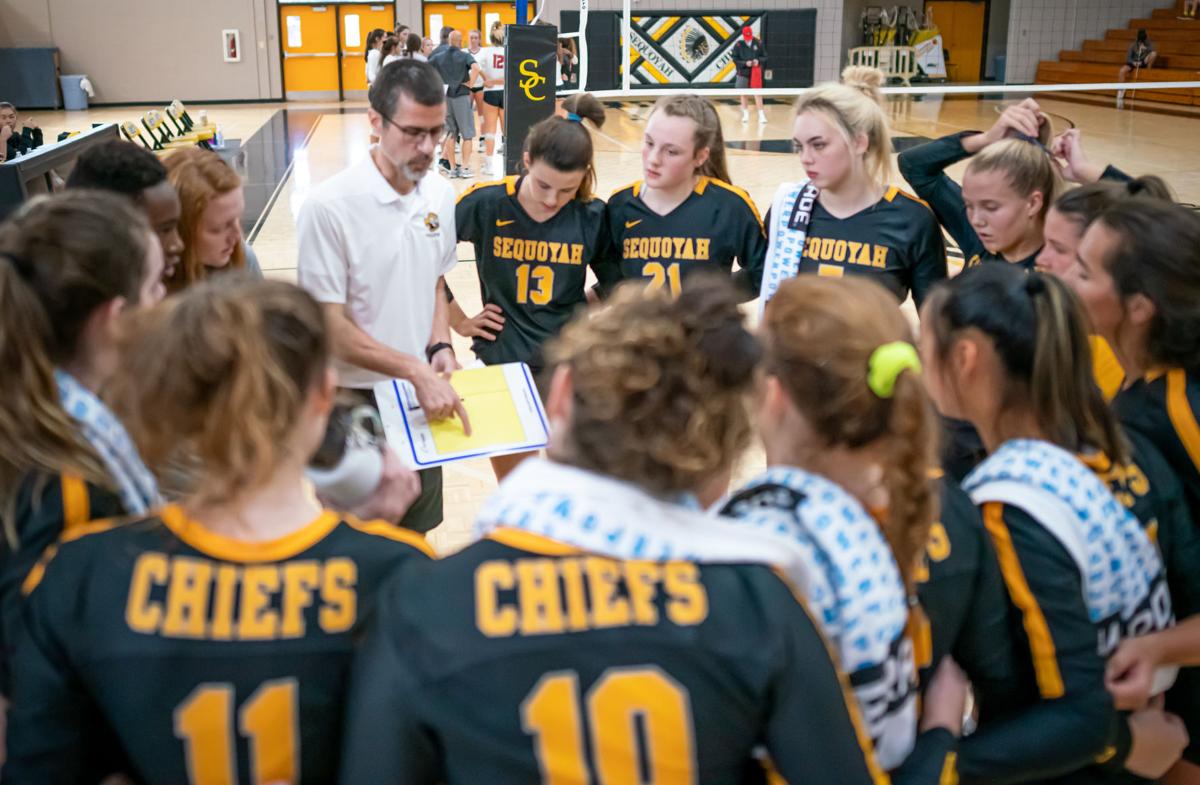 Sequoyah coach John Edwards talks with his team during Sequoyah's match against Allatoona in the Region 6AAAAAA championship on Saturday in Canton. 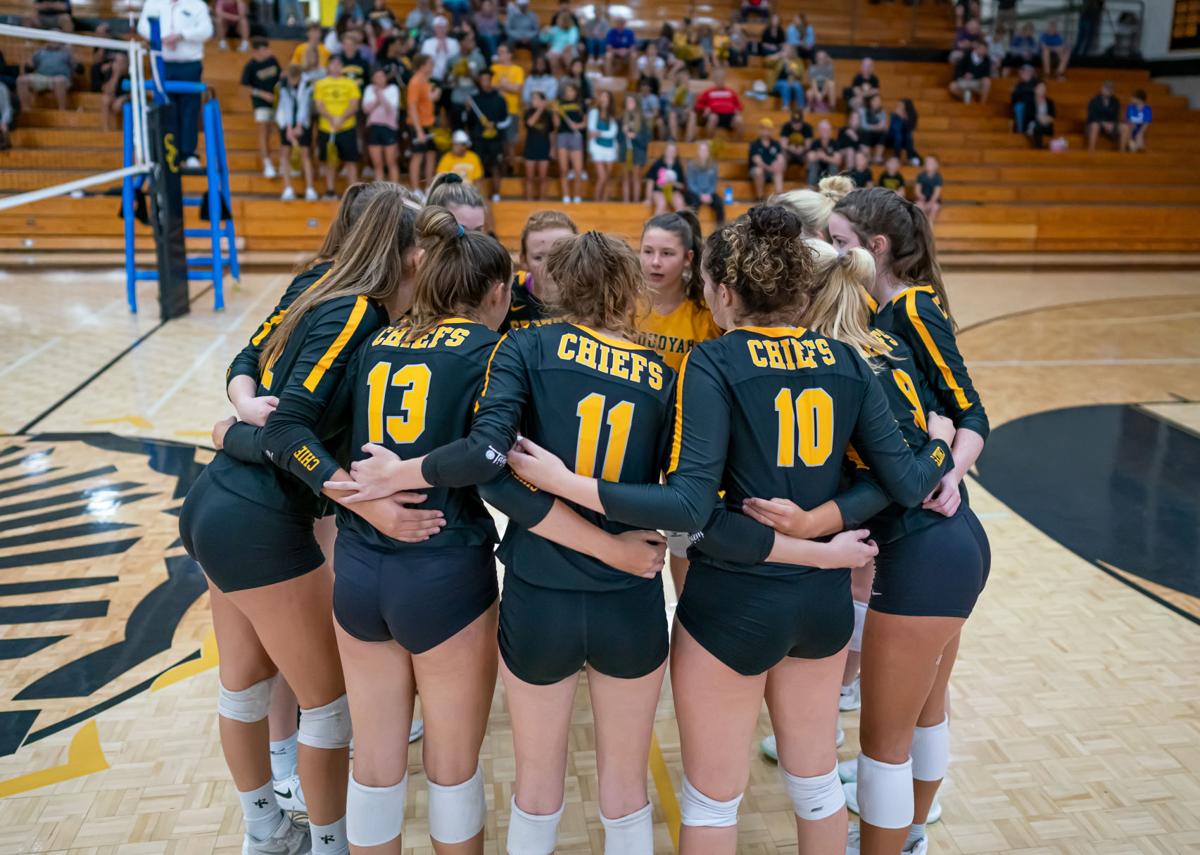 Sequoyah volleyball players huddle at the Region 6AAAAAA championship on Saturday in Canton. 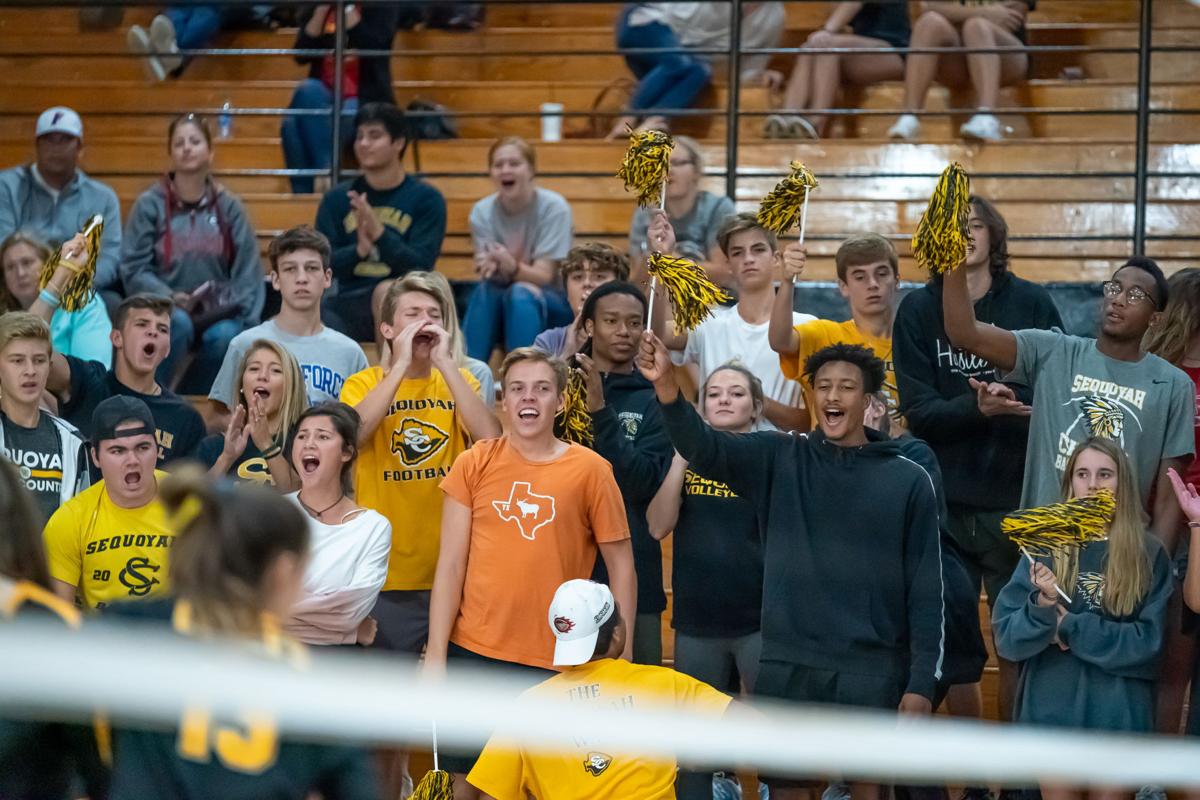 Students from Sequoyah cheer on the Lady Chiefs during the Region 6AAAAAA championship on Saturday in Canton. 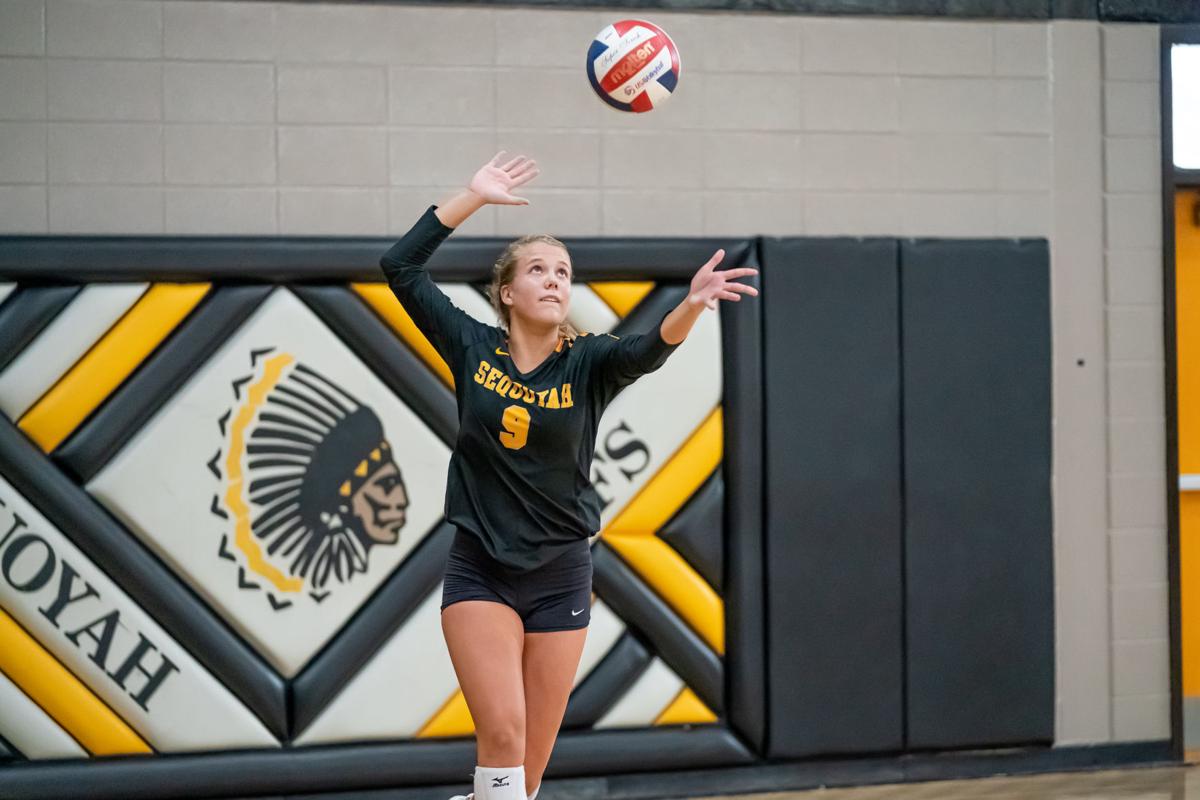 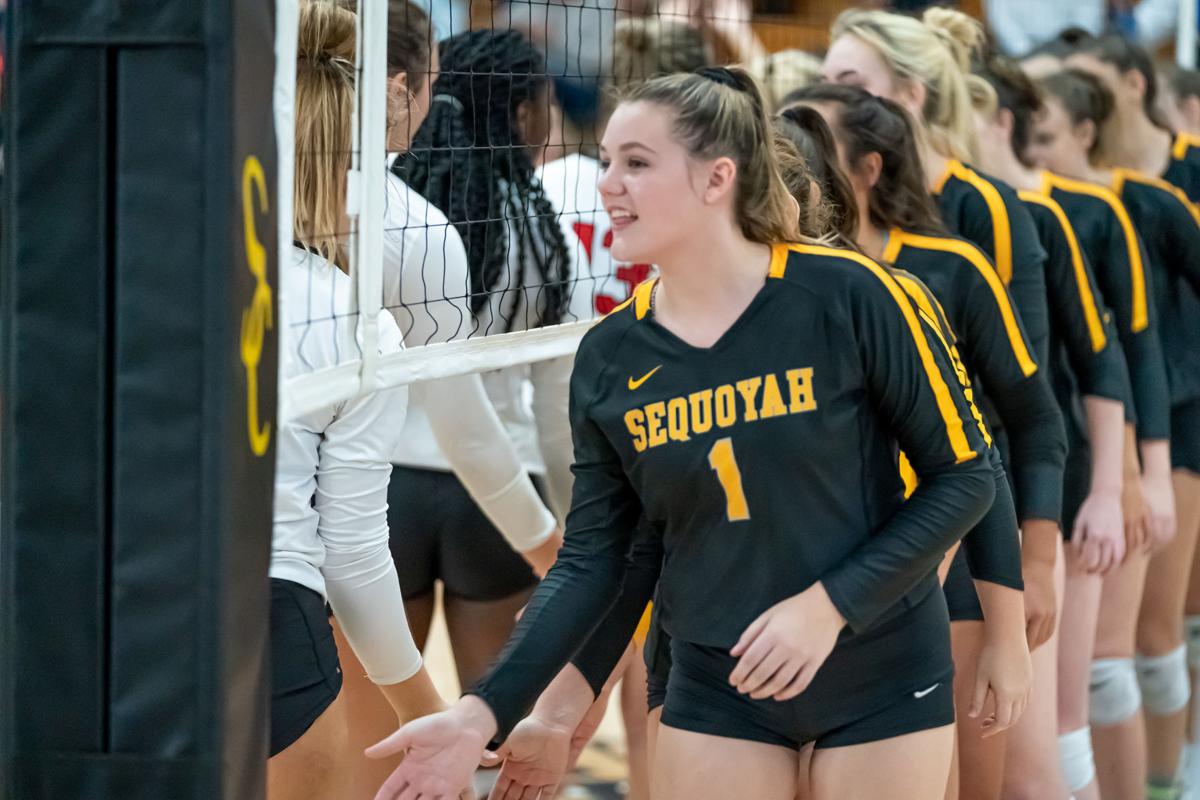 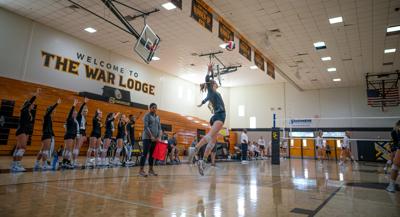 Sequoyah coach John Edwards talks with his team during Sequoyah's match against Allatoona in the Region 6AAAAAA championship on Saturday in Canton.

Sequoyah volleyball players huddle at the Region 6AAAAAA championship on Saturday in Canton.

Students from Sequoyah cheer on the Lady Chiefs during the Region 6AAAAAA championship on Saturday in Canton.

CANTON — What a quick turnaround Sequoyah has made in one season.

Last season, the Lady Chiefs just made it into the state tournament as the region’s No. 4 seed only to get swept in the first round. Now they are region champions for the first time since 2013.

The addition of four freshmen has made a difference, most notably setter Taylor Pecht, who dished out 45 assists in leading the Lady Chiefs to a 25-16, 25-23, 21-25, 25-19 win over Allatoona in the Region 6AAAAAA championship Saturday at The War Lodge.

The other Sequoyah freshmen played their parts as well. Libero Skylar Martin led with 26 digs, Sara Siefert ended up with 11 kills and Catherine Brumbelow added seven kills and three aces.

With the win, Sequoyah will host Lanier in the first round of the Class AAAAAA state tournament Saturday while Allatoona heads to Tucker to face Habersham Central. Harrison, the No. 3 seed, will head south to Glynn Academy to face Gainesville and No. 4 seed River Ridge will play at Apalachee.

While the Sequoyah freshman quartet made a difference against defending region champion Allatoona, it took a team effort to thwart a comeback attempt made by the Lady Buccaneers. The turning point for the Lady Chiefs (37-1) was how they bounced back in the fourth set after dropping the third. They immediately showed they were not rattled by taking an early 13-2 lead.

“You want to win, but you never want to expect to win, especially with how tough our region is,” Sequoyah coach John Edwards said. “To be able to do it at home is special. Allatoona is going to score on you, we just have to answer. It was really good to see, after losing Set 3, how we were going to respond, and we played great that fourth set.”

Sequoyah’s early fourth set dominance started when Pecht opted to dump the ball on Allatoona’s side of the net for a kill instead of making a routine set. That play started a five-point service run by Brumbeloe, which consisted of two Paige Powers kills, a Emma Bjerke kill, a Brumbeloe ace and an Allatoona hitting error.

After Allatoona stopped the bleeding on a Chamblee Russell kill, the Lady Chiefs embarked on a six-point run on Pecht’s serve, highlighted by two kills and a block by Allie Powers.

Sequoyah held the lead the rest of the way, not allowing Allatoona to get within five points.

“A lot of it was the little things that we needed to fix,” Edwards said. “All season long, we have had composure, even with the amount of young players that we have on our team. (Saturday) wasn’t anything different, it was just ‘Hey, we got this. Let’s reset and keep playing hard.’”

While the first and fourth sets were relatively one-sided in Sequoyah’s favor, the Lady Chiefs had to play from behind in both second and third sets.

While the Lady Chiefs did surrender the third set to Allatoona, they rallied to win the second.

Trailing 22-21, Allatoona hit a service error to tie it and an ace by Pecht put the Lady Chiefs in front. Allatoona tied it at 23-all on a Cayla Kalinowski kill, but a double hit call against Allatoona gave the Lady Chiefs set point before Siefert finished it off with a kill.

“They’re just smart,” Allatoona coach Joe Soley said of Sequoyah. “They have set plays and we’re trying to read what we’re doing and our mental game probably wasn’t there in this particular match, but they know our hitters.”

Allatoona only had minutes to recoup for Sequoyah after rallying from two match points down to beat Harrison 27-25, 22-25, 16-14 moments earlier to advance to the championship.

Along with Sequoyah and River Ridge, Etowah also qualified for the state playoffs.

After defeating Roswell 3-1 in the region semifinals, Etowah (32-13) fell in three sets to Walton in the Region 4AAAAAAA championship this past week. The region runner-up finish gives Etowah, the No. 3-ranked team in Class AAAAAAA, a No. 2 seed in the first round of the state playoffs.

The Lady Eagles will host Campbell (5-13), the No. 3 seed out of Region 2, on Saturday with the match time yet to be announced.