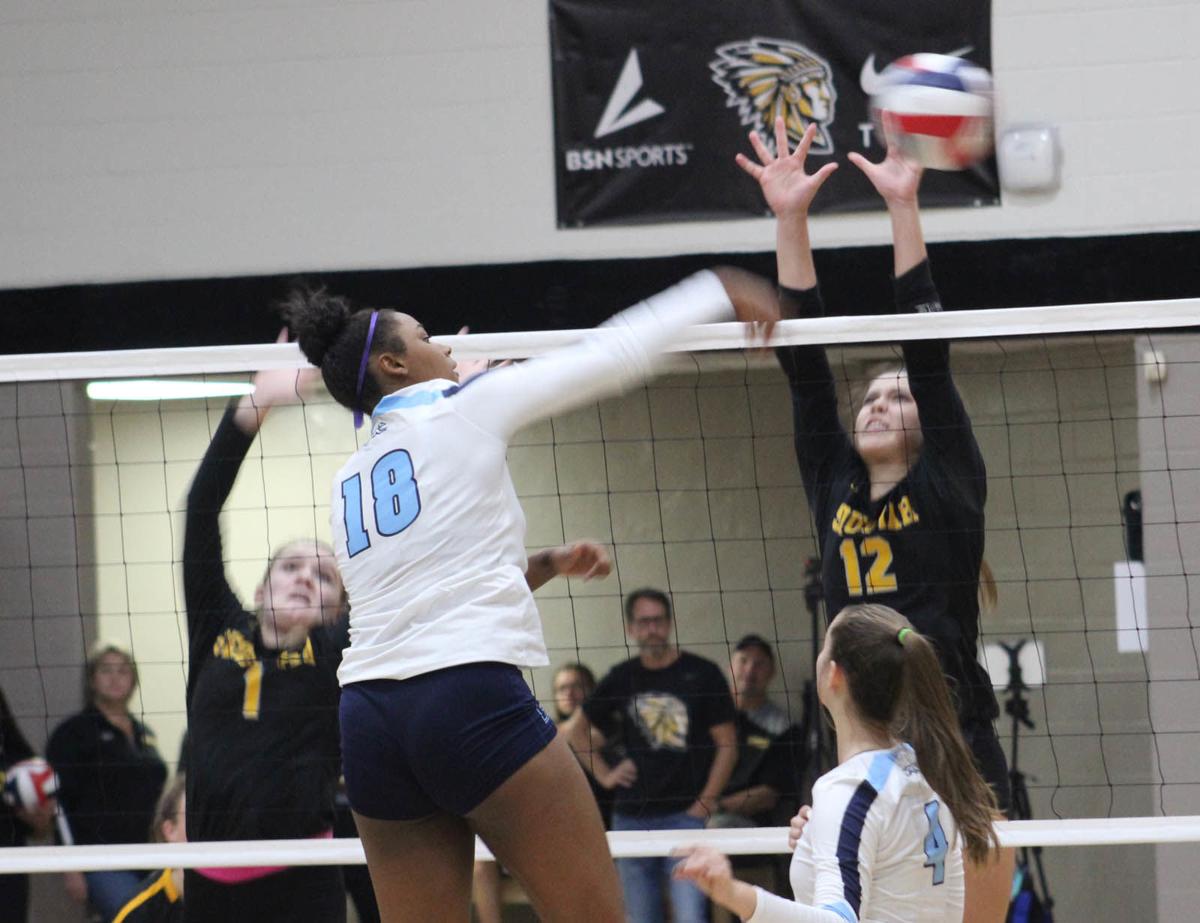 Sequoyah's Paige Powers (12) leaps in an attempt to defend the attack from Pope's Ayanna Rodgers in the Class AAAAAA semifinals. 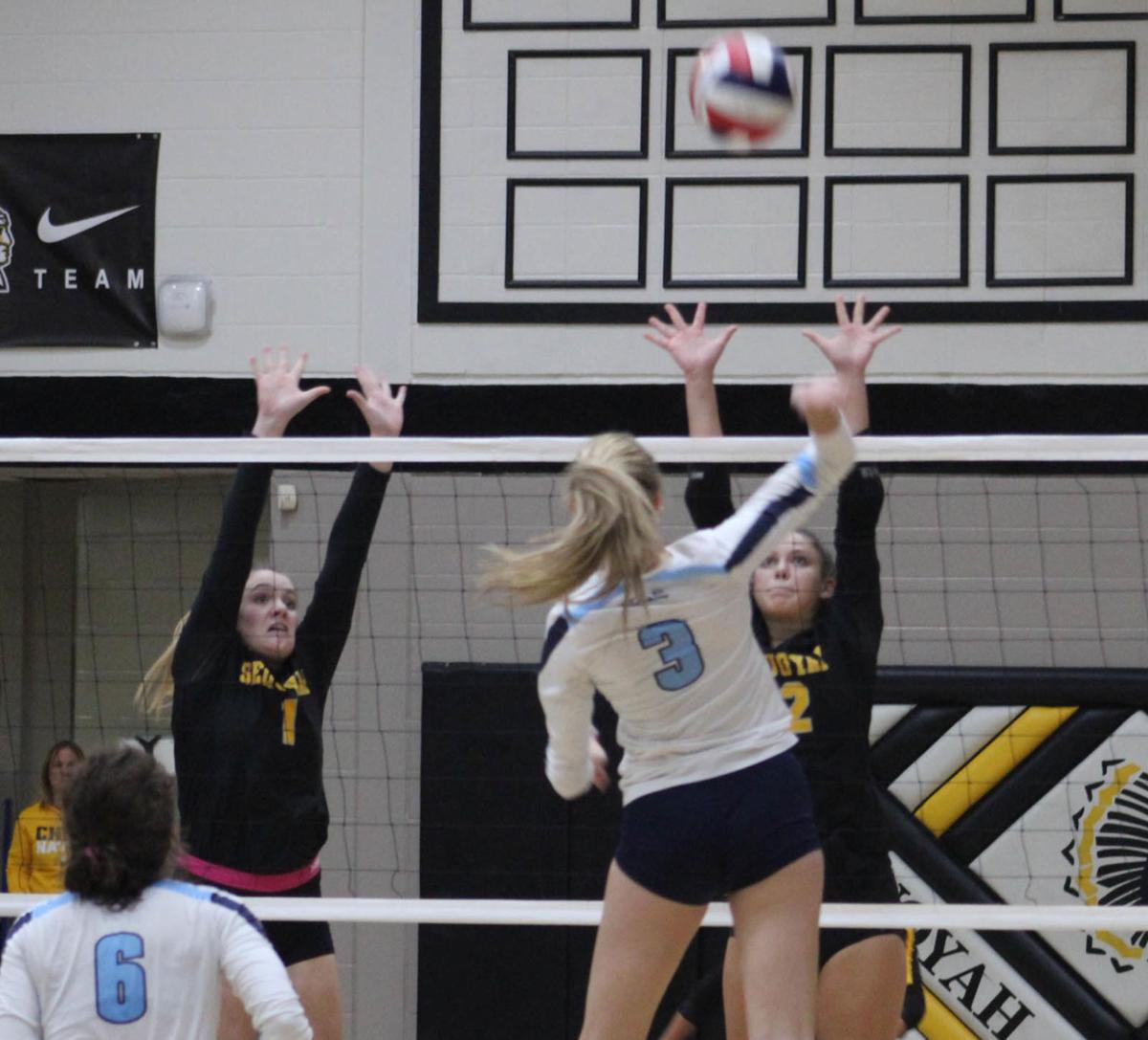 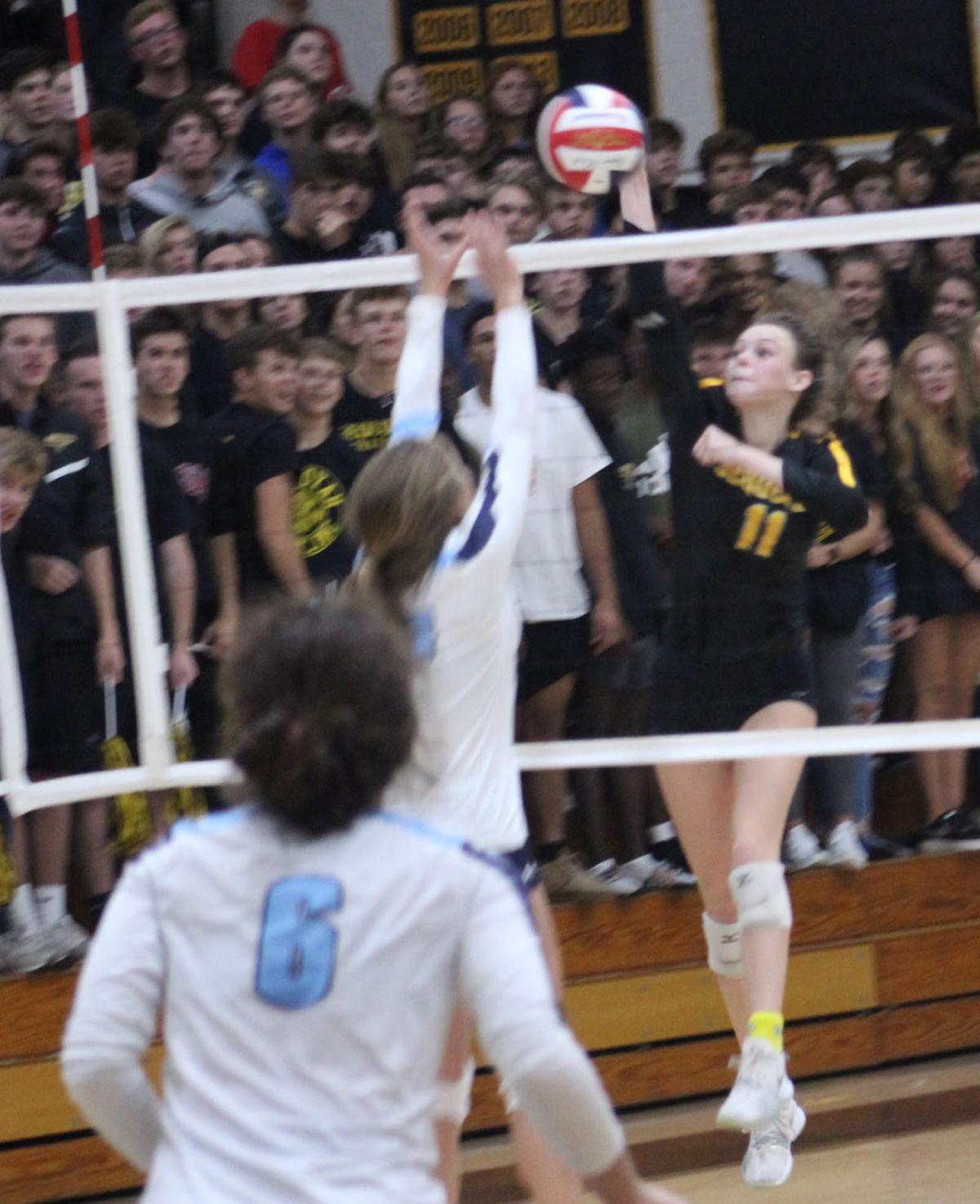 Sequoyah's Allie Powers tips the ball over the net against Pope in the Class AAAAAA semifinals. 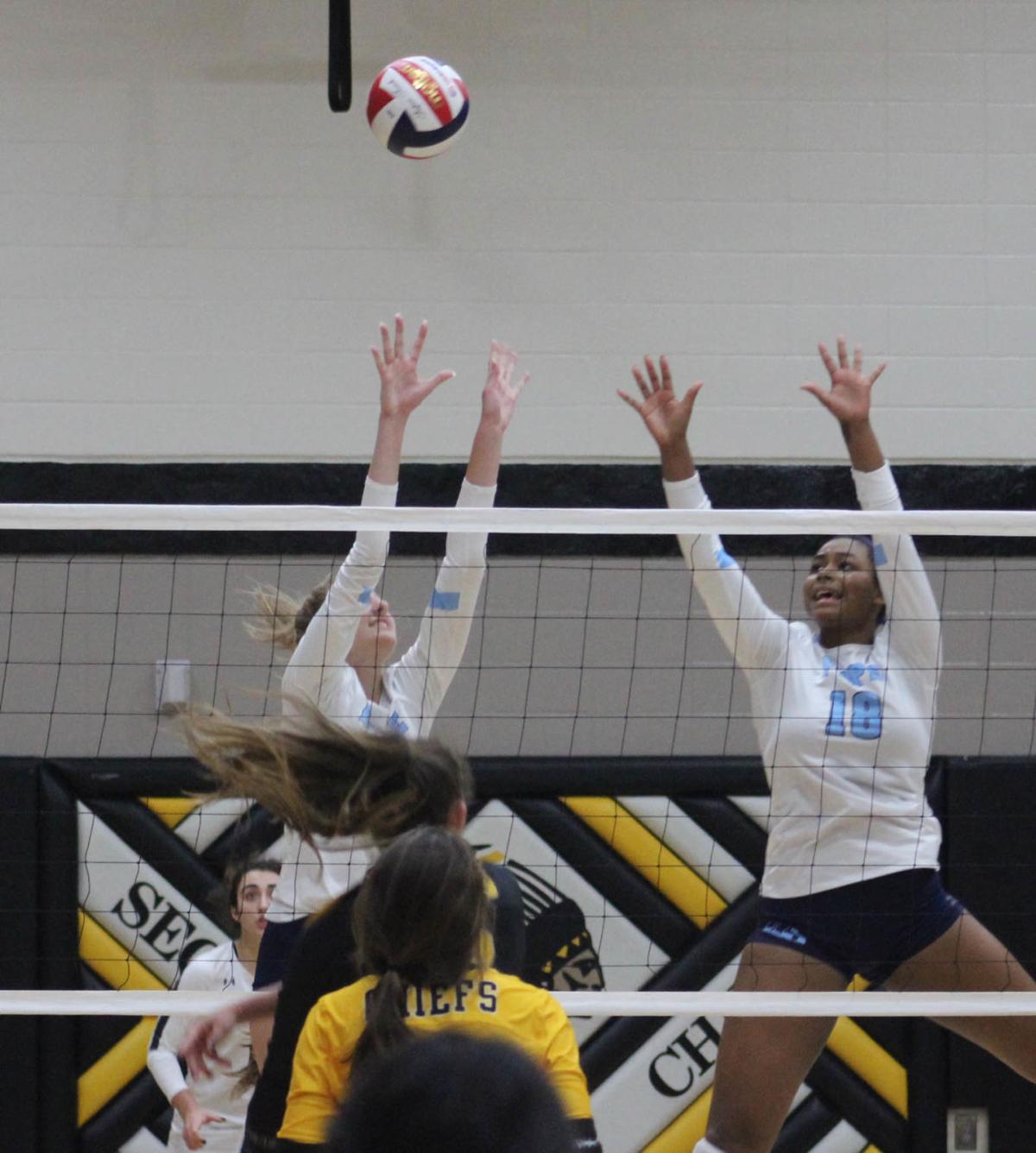 Pope's Madison Mims and Ayanna Rodgers (18) leap in vain for a Sequoyah attack in the Class AAAAAA semifinals. 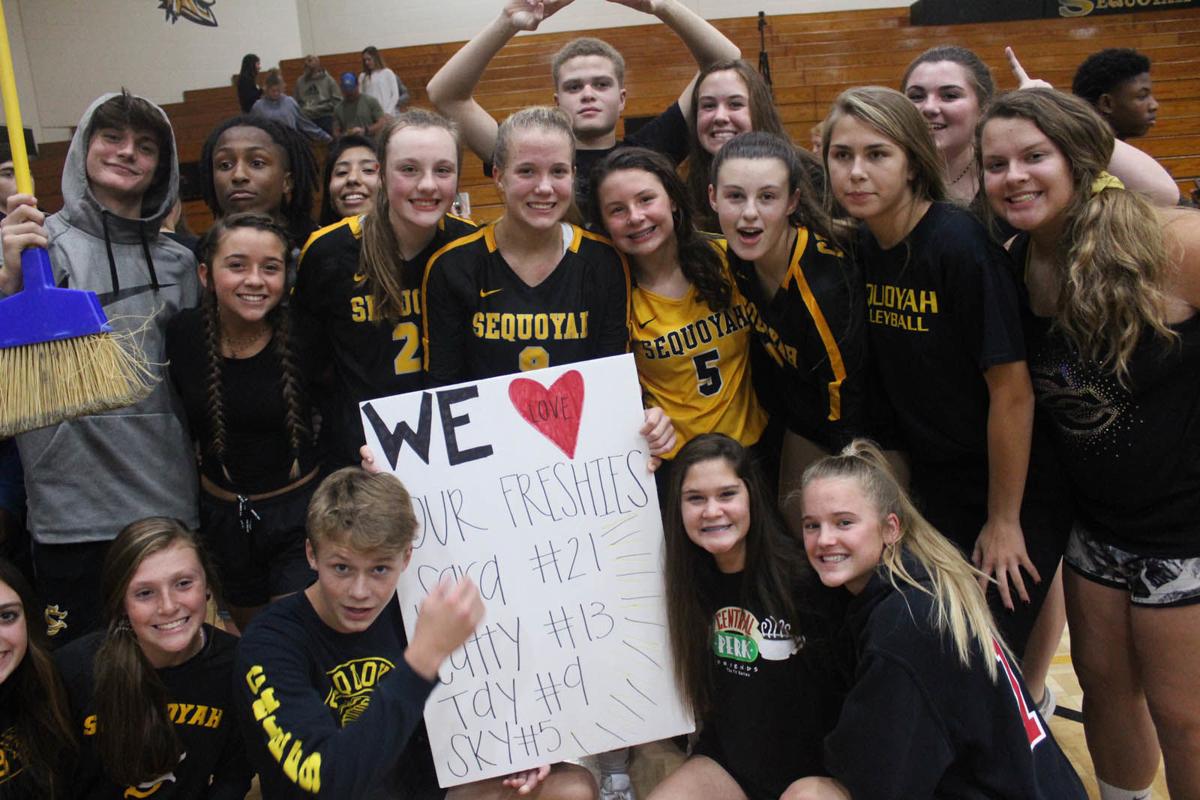 Sequoyah players and fans celebrate after beating Pope in the Class AAAAAA semifinals.

Sequoyah's Paige Powers (12) leaps in an attempt to defend the attack from Pope's Ayanna Rodgers in the Class AAAAAA semifinals.

Sequoyah's Allie Powers tips the ball over the net against Pope in the Class AAAAAA semifinals.

Pope's Madison Mims and Ayanna Rodgers (18) leap in vain for a Sequoyah attack in the Class AAAAAA semifinals.

Sequoyah players and fans celebrate after beating Pope in the Class AAAAAA semifinals.

CANTON -- Sequoyah had a plan to contain Pope’s middle hitters, and it worked effectively.

In what could have been their most complete match of the season to date, the Lady Chiefs instead had the defending Class AAAAAA defending champion rattled from the start and never let up until they won 25-13, 25-16, 25-16 in Tuesday's state semifinal at the War Lodge.

“I don’t think we could have played any better,” Sequoyah coach John Edwards said. “That’s probably the best match we've ever played from the beginning point to the end point against a quality, quality Pope team. (Tuesday) was just another level of how good we can be defensively and understanding where (Pope) is going to hit.”

The Lady Chiefs, seeking their second state title, will face a rematch against Region 6AAAAAA rival Allatoona on Saturday for the championship at Marietta High School.

Sequoyah (41-1), which won the title in 2014, has beaten Allatoona all three times they have faced off this season, the most recent win coming in a four-setter for the region tournament title.

Pope (37-13) made it to semifinals without its most experienced hitter, Stella Dees, who missed the season with a shoulder injury. Without Dees, the Lady Greyhounds focused on being defensive-minded and getting their middle hitters more involved offensively. Zeren Yesilova, a defensive specialist, was asked to play more of an offensive role at outside hitter.

Against Sequoyah, it was Yesilova who led the Pope with five kills. Middle hitters Lily Harvey and Ayanna Rodgers were held to four each after doubling that number in Pope’s straight-set win over River Ridge in the quarterfinals.

“They knew that we're a middle-driven team,” Pope coach Shawn Darling said. “They pushed us on serve-receive, and our middles were taken out of our offense. We had a hard time shouldering that. They did a great job making sure they did that to us.”

After Sequoyah jumped out to a 5-2 lead in the first set, Pope rallied to tie it at 6-all. From there, it was all Sequoyah. The Lady Chiefs quickly made it 12-6 on Skyler Martin’s serve, and Pope could not answer.

The second and third sets both started with an early Sequoyah service run.

The first portion of the third set was evenly matched between the teams. With Sequoyah holding on to a 14-12 lead, a service run by Pecht gave the Lady Chiefs a six-point lead and denied all hopes of a Pope comeback.

“We worked on how we could get (Pope) out-of-system so they couldn’t set their middles,” Edwards said. “We had a specific game plan for each hitter, and I was really proud of our players for executing their game plan.”