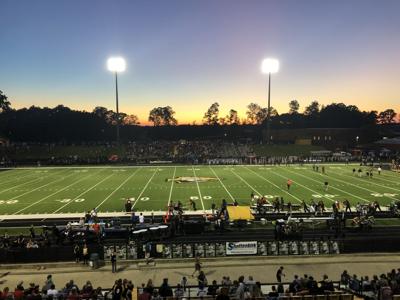 As the calendar reaches late October, the playoff picture is beginning to sort itself out, setting up pivotal games with significant playoff implications.

Sprayberry (4-3, 3-2 Region 6AAAAAA) will travel to Sequoyah (4-3, 3-2) on Friday for a game between two teams jockeying for position below Harrison and Allatoona.

Sprayberry upended Dalton last week in a result that surprised many, but Sequoyah coach James Teter was not one of those who was blindsided by the final score.

“We saw Sprayberry over the summer and knew they were going to be pretty good,” Teter said. “Coach (Brett) Vavra has done a really good job with that defense, and with this being his third year, now you’re definitely starting to see the growth.”

Sprayberry held the state’s leading rusher, Jahmyr Gibbs, to his lowest yardage total of the season, with 93 yards and no touchdowns on 21 carries. Vavra said the Yellow Jackets’ defense has employed multiple defensive fronts depending on the opponent, but facing the Wing-T attack of Sequoyah will present different challenges.

“I thought our defensive coaches did a really good job last week,” Vavra said. “We’ve been using that odd front scheme all season, and I think our kids have realized that it really fits us best. It’ll be different this week going up against Sequoyah’s offense, and we definitely plan on being multiple against them. I think we’re progressing in the right direction, and even though we’re a little less experience this year, our kids have done a great job of buying in.”

Offensively, Sprayberry will lean toward Damarion Owens, Cobb County’s leading rusher with 1,013 yards and 10 touchdowns, along with an explosive slot receiver in Josh Bush. Bush will be used both as a receiver and running back as he provides a nice change of pace to the bruising running style of Owens.

Sequoyah is coming off back-to-back wins and its second-highest point total of the season. The Chiefs’ defense has been one of the best in the region, allowing 15.1 points per game, and the offense has produced touchdowns from multiple players beyond running back Jaden Mitchell (494 yards and four touchdowns) over the past two weeks.

Establishing a running game is always the key for Sequoyah, but incorporating a threat in the passing game with quarterback Colin Koprowski will likely determine whether the Chiefs come out on top.

History may be on Sequoyah’s side as it has only twice lost to Sprayberry in the series’ history. The Yellow Jackets’ last win over the Chiefs came in 2009, and with only a few weeks remaining in the regular season, both teams understand the importance of Friday night’s game.

“Our kids understand what’s at stake,” Vavra said. “We’re not getting too high about it, and we’re just going to go about our business, but they understand what this game is. It’s important because it’s the next game up in the region.”