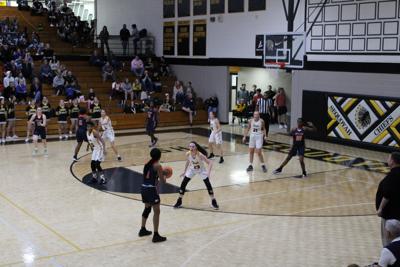 The Lady Chiefs went with their youngest starting lineup of the season and beat South Cobb 82-53 on Tuesday night at the War Lodge.

“We really struggled rebounding last week, so we were trying to work on some things by switching the lineup,” Yarbrough said. “We’re just trying different lineup combinations, so, if we get in that situation again, we’ll know how to adjust.”

A fast-paced, high-scoring first quarter saw both teams knocking down shots, and Sequoyah took a 15-9 lead midway through the period. South Cobb responded with a 10-2 run to close the quarter, capped off by a Jodi Mullins’ 3-pointer, and took a 19-17 lead into the second.

Beginning in the second quarter, Sequoyah took full control of the game.

A 17-2 run to start the period saw contributions from throughout the lineup, particularly from two seniors coming off the bench. Tatum Dondanville and Macy Williams each finished with 13 points and kept the pressure on South Cobb defensively when starters Elle Blatchford and Deja Rakestraw went out with foul trouble.

Sequoyah led 38-27 at the half and never looked back.

“We got 26 from our two seniors off the bench tonight, which was really big,” Yarbrough said. “When you shoot well, you can cover up some things. We really took it to them in the second half, and it was a total team effort.”

Sequoyah finished with 10 players recording points and picked apart South Cobb in the second behind excellent ball movement and spacing. The Lady Chiefs recorded 26 assists and 15 steals, while outscoring South Cobb 44-26 in the second half.

Eight of Jackson’s rebounds came on the offensive end.

“We really controlled the glass tonight,” Yarbrough said. “We still have some stuff to clean up, but, overall, I was really happy with the effort tonight.”

For South Cobb, Mullins finished with a game-high 23 points to go along with four rebounds and one steal, while Deri Barnes added 11 points, five rebounds, two assists and two blocks.

South Cobb will host Creekview on Friday, while Sequoyah will play at River Ridge in a matchup between the second- and third-place teams in the region.