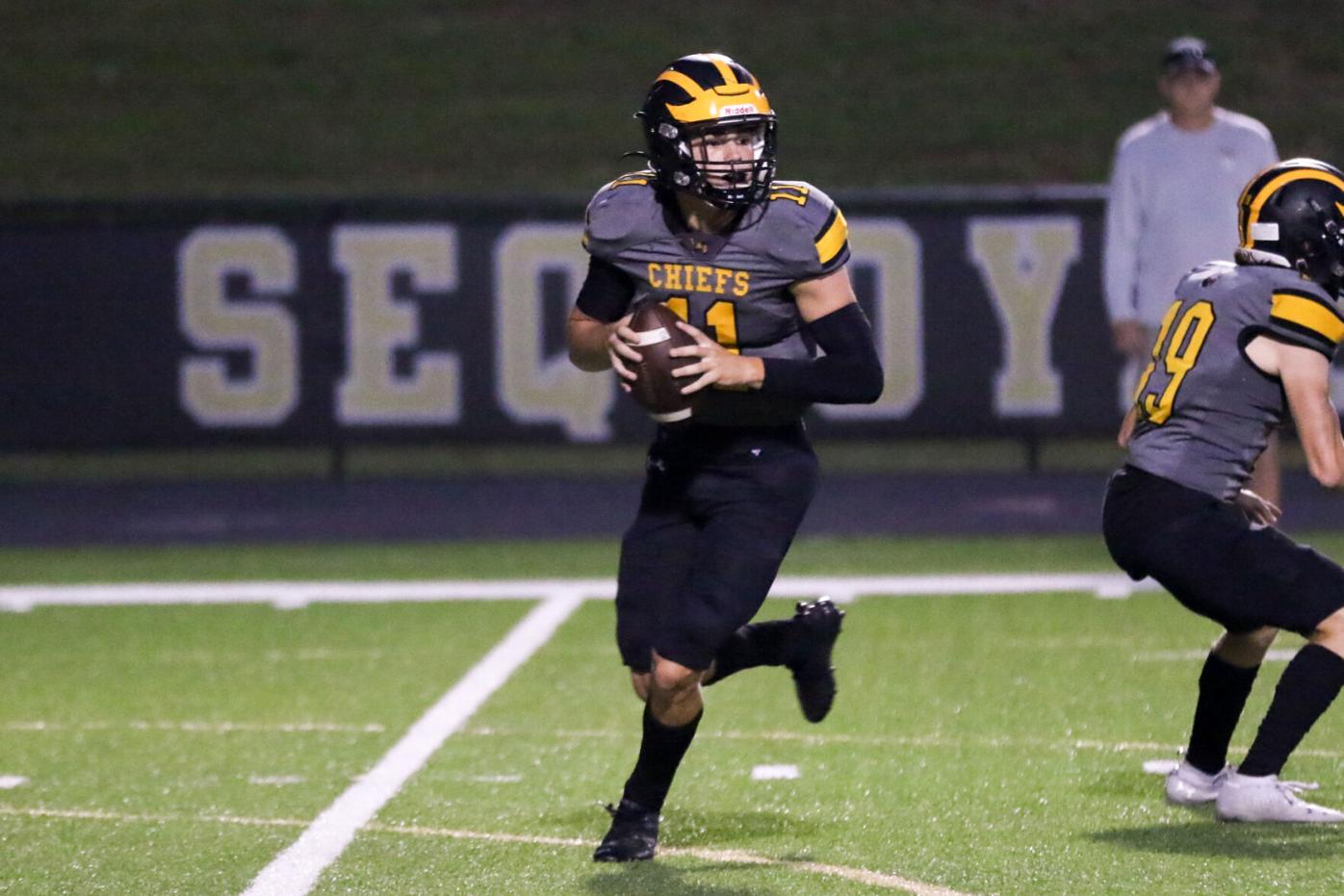 Matthew Traynor scrambles to the outside 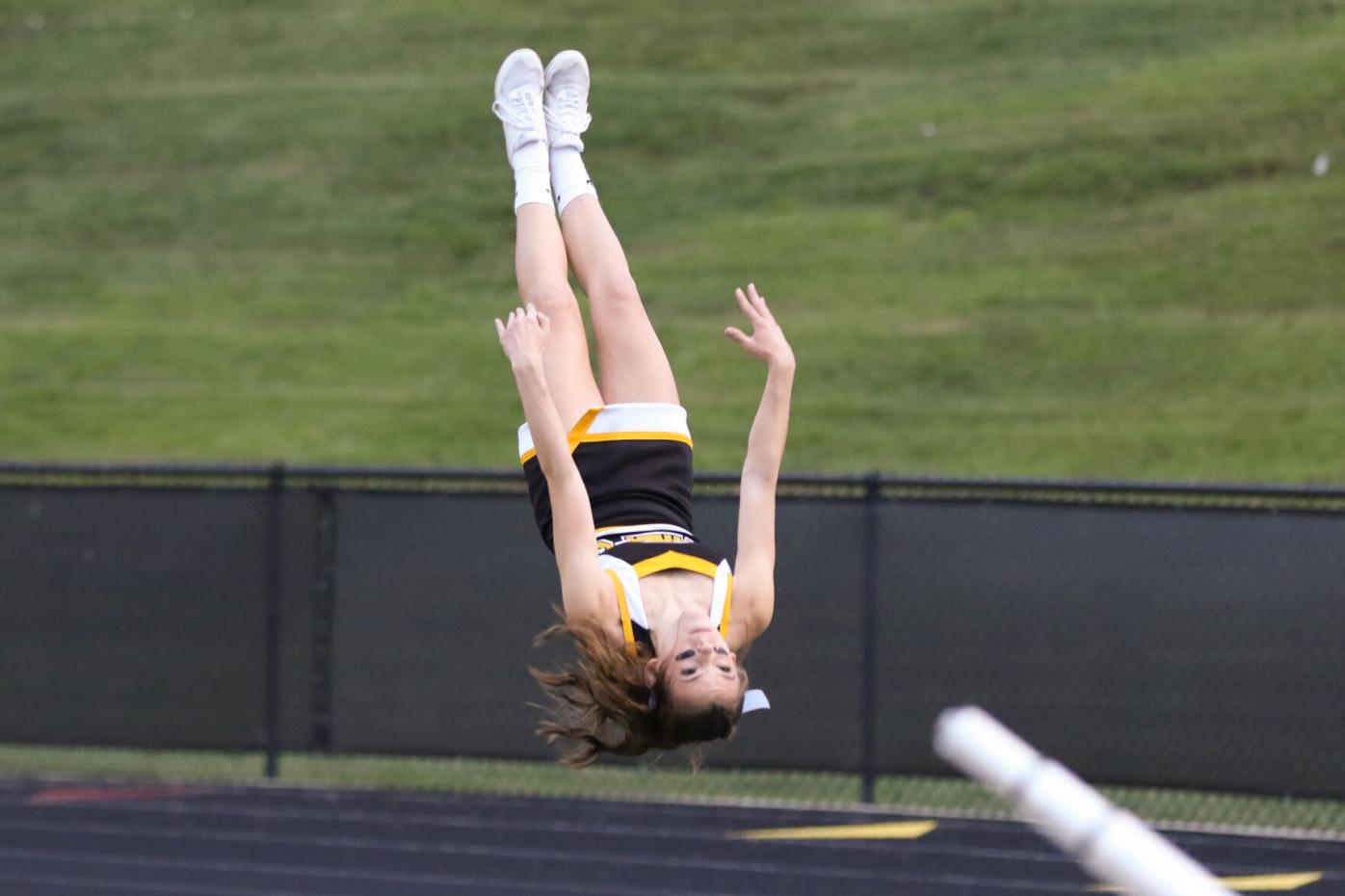 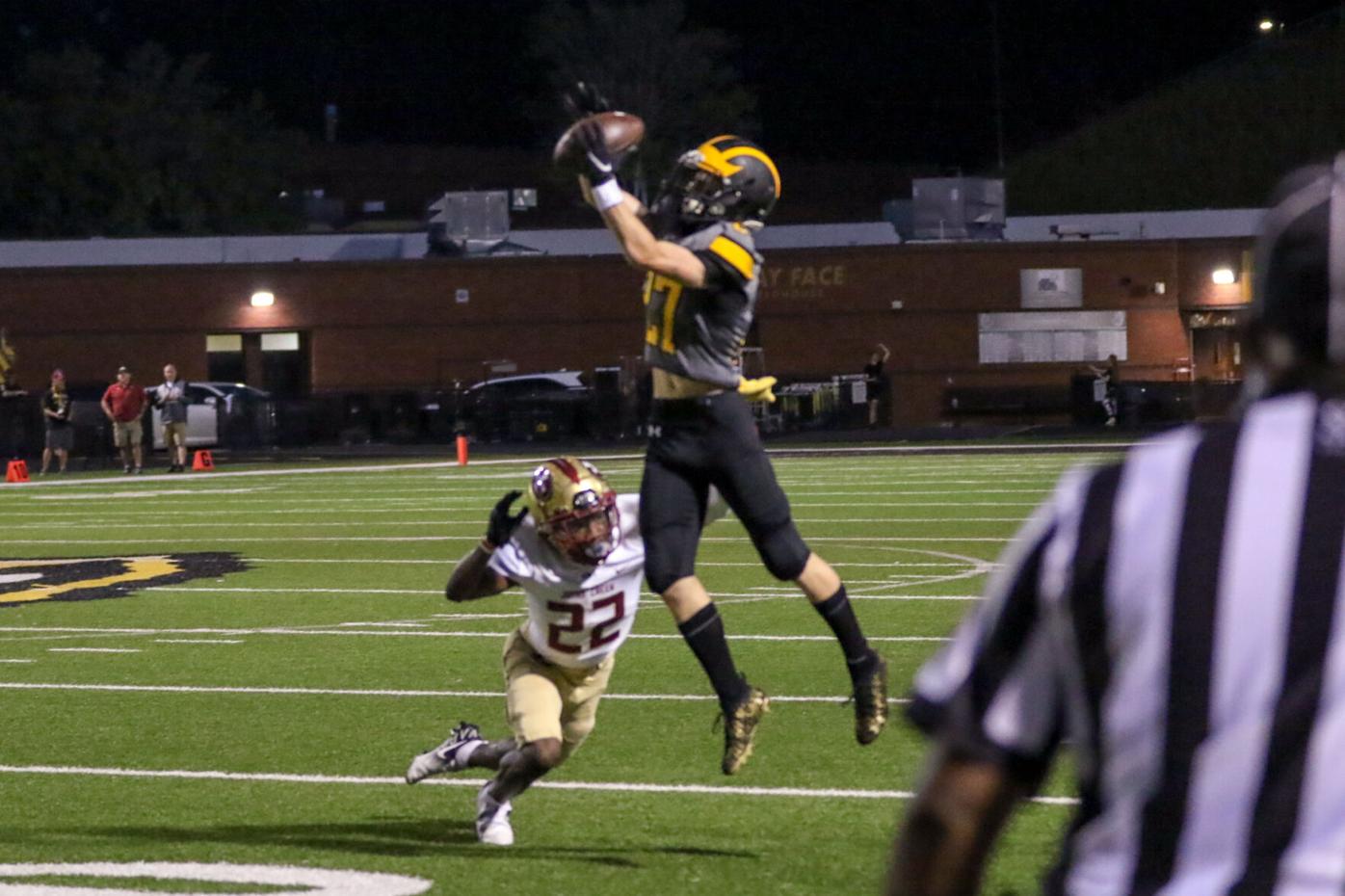 Cameron Massey with the high catch 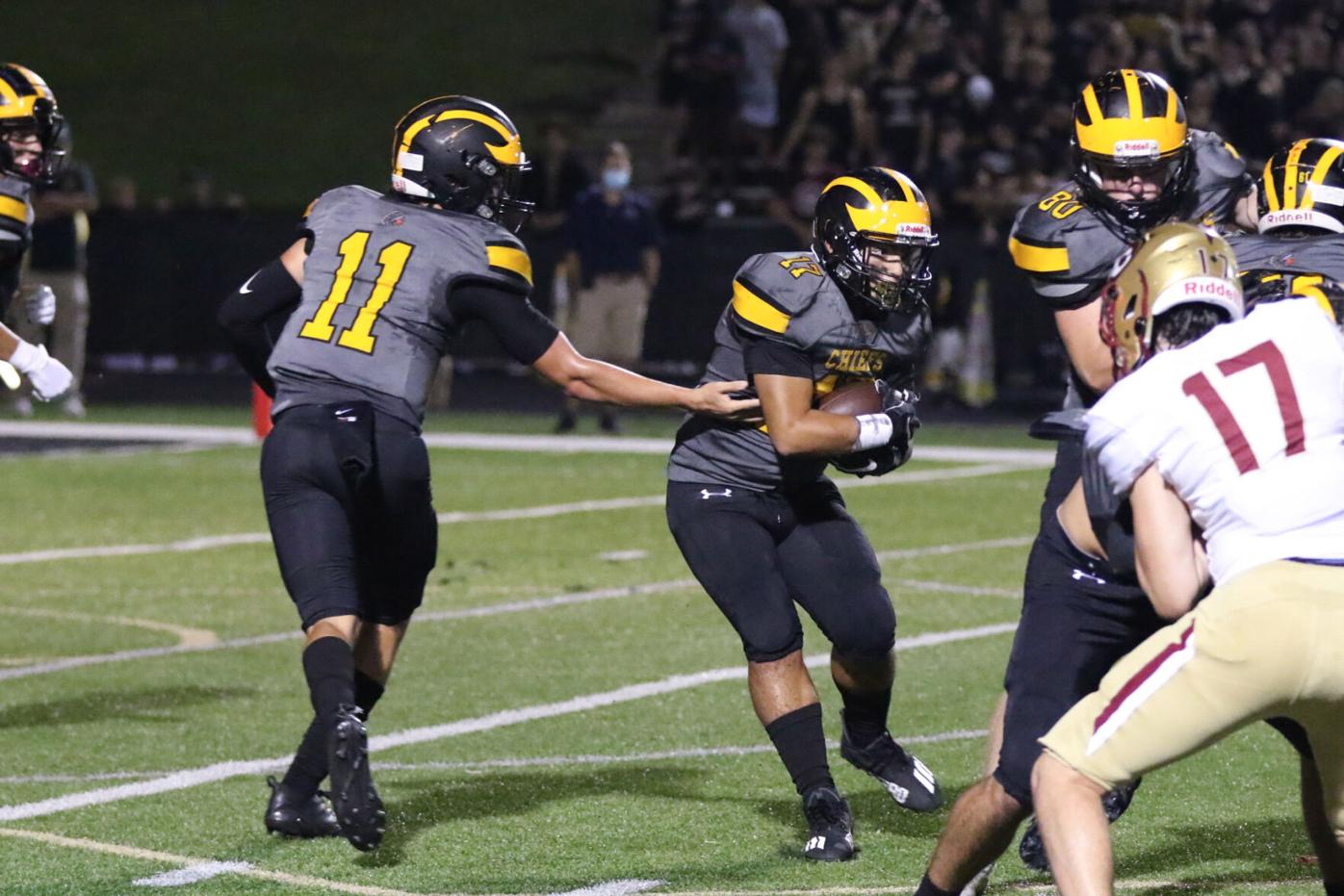 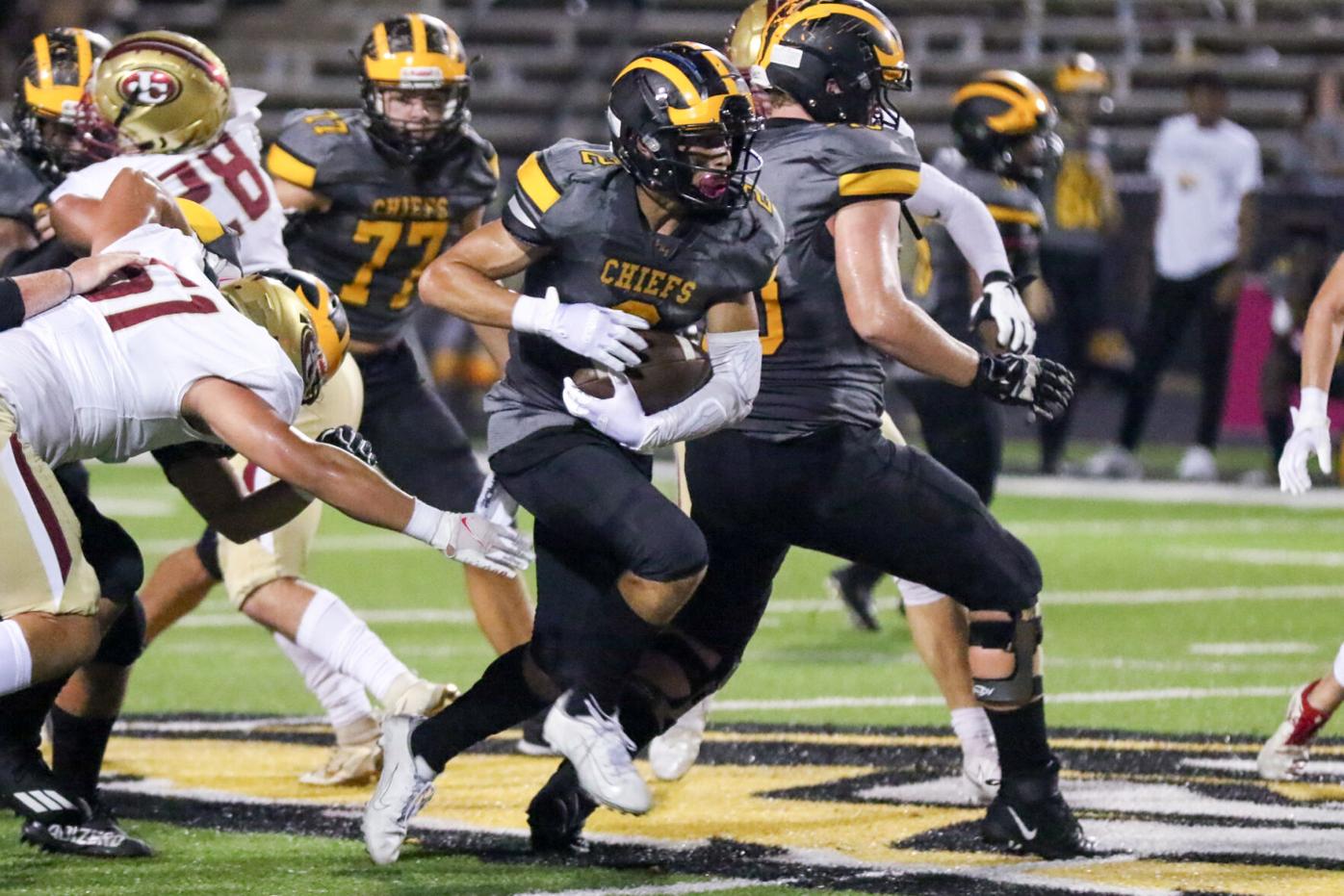 Jackson Hancock with the carry 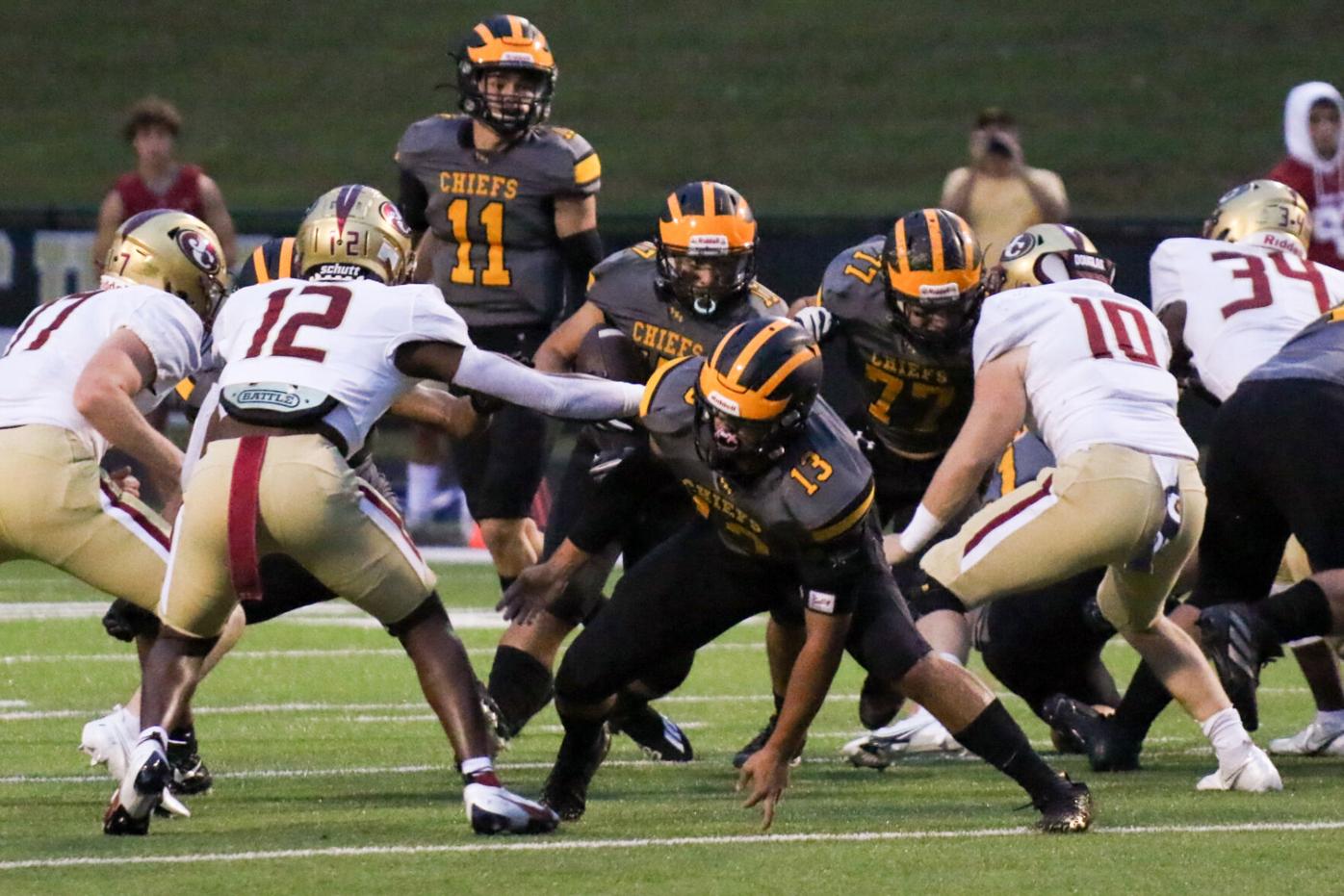 Cruz Wright with the carry 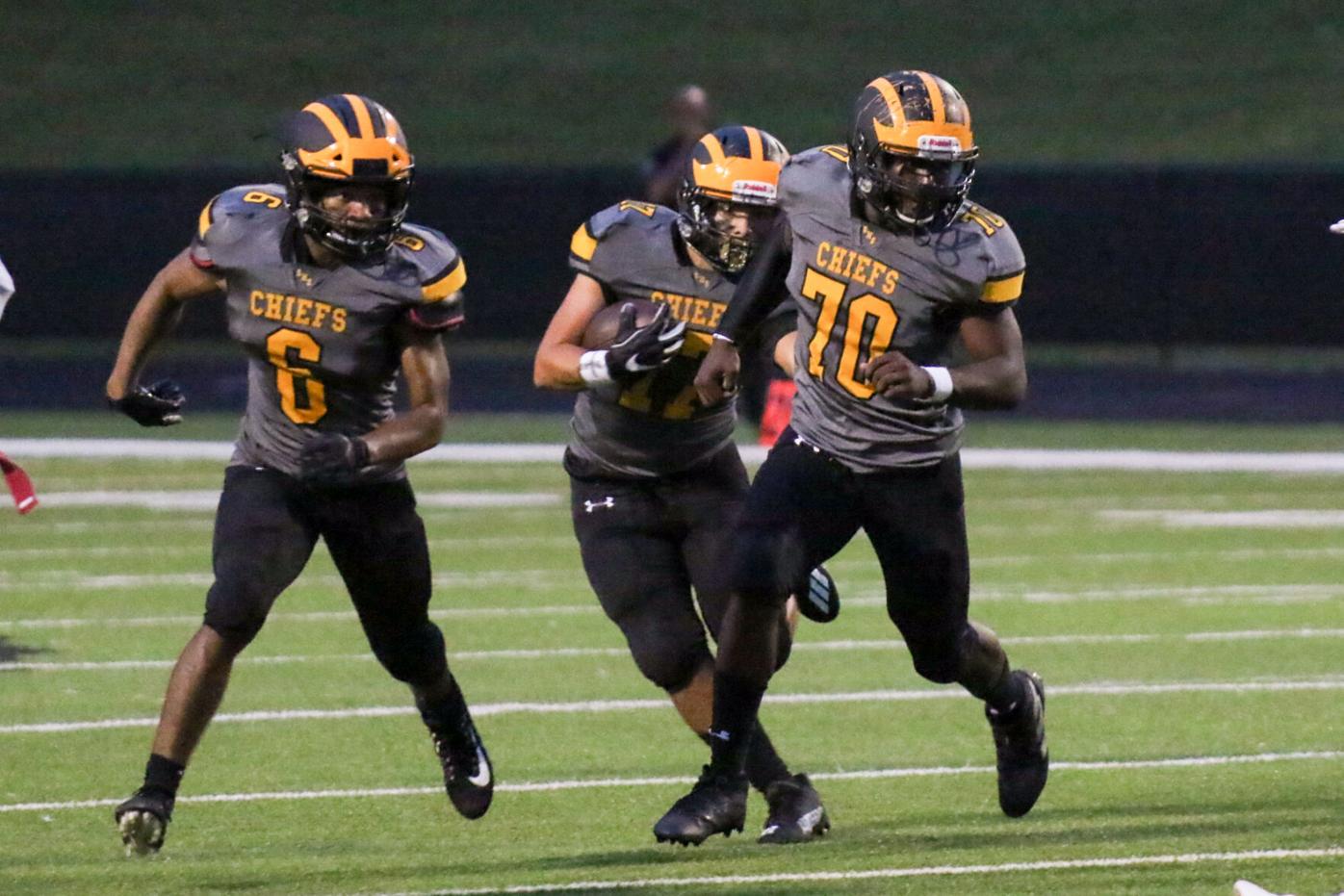 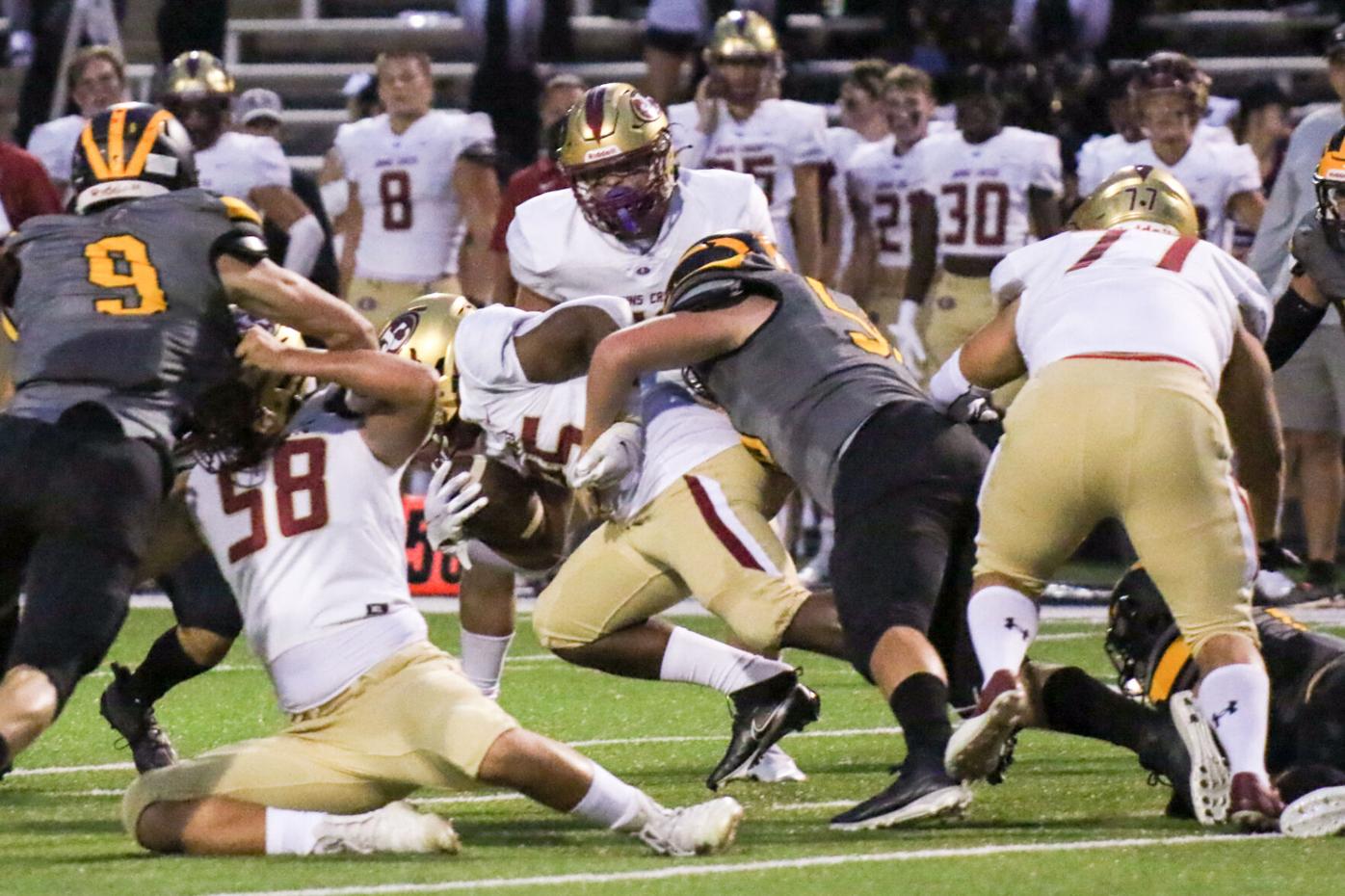 Brady Curl with the tackle 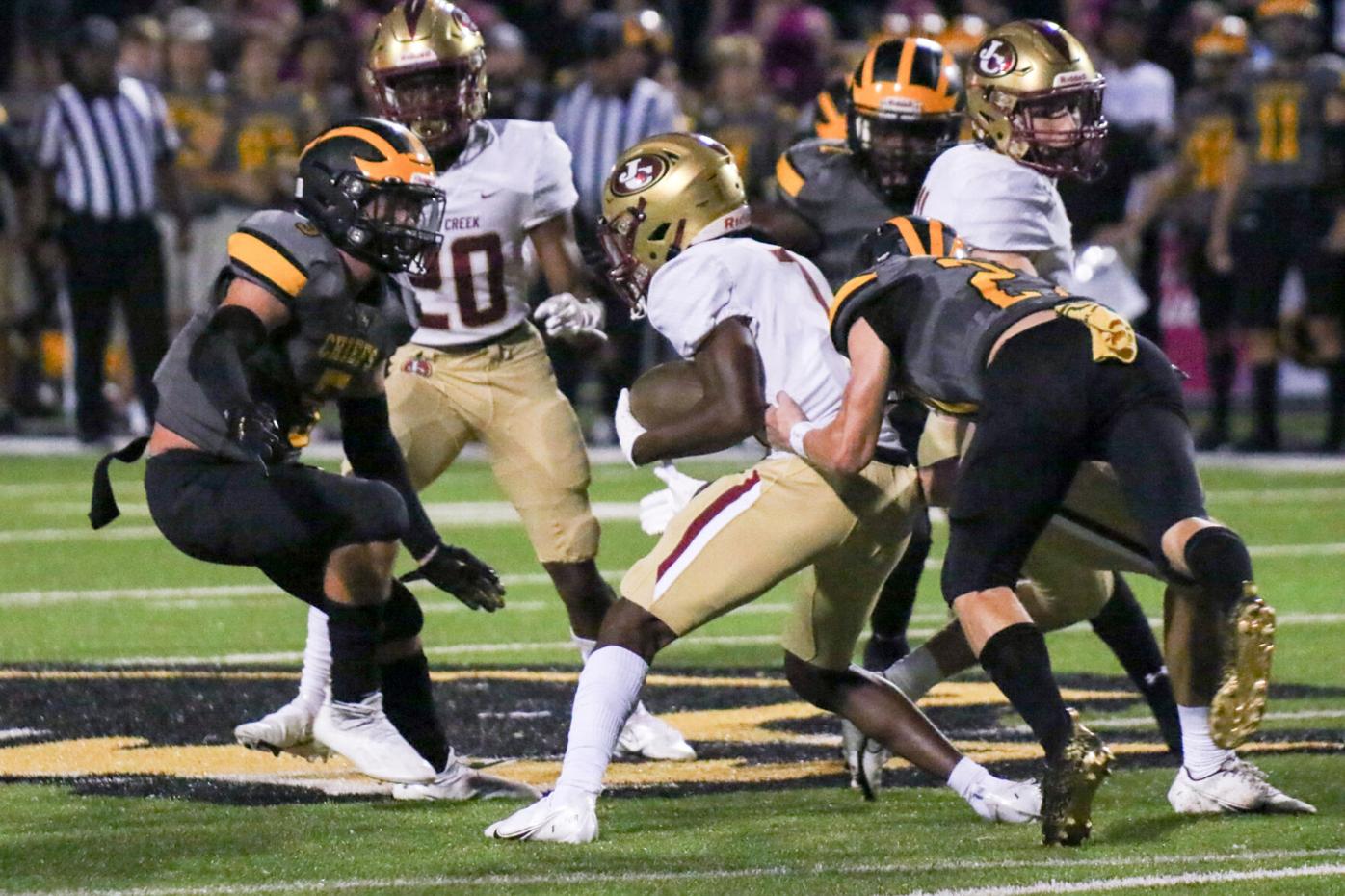 Chiefs Cameron Massey(27), Chris Miller(5), and Izaiah Sanders(7) team up for the tackle 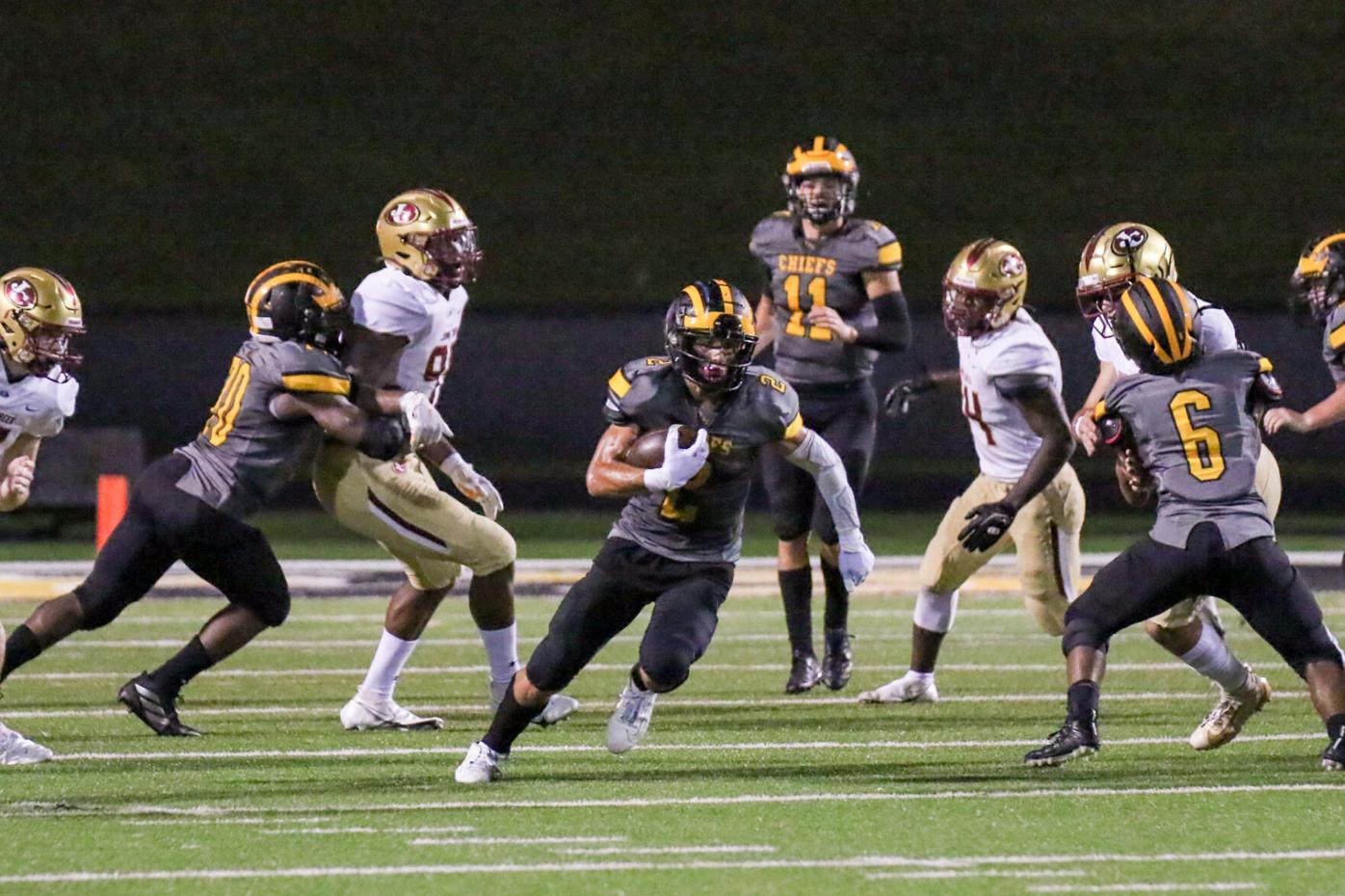 Jackson Hancock through the gap 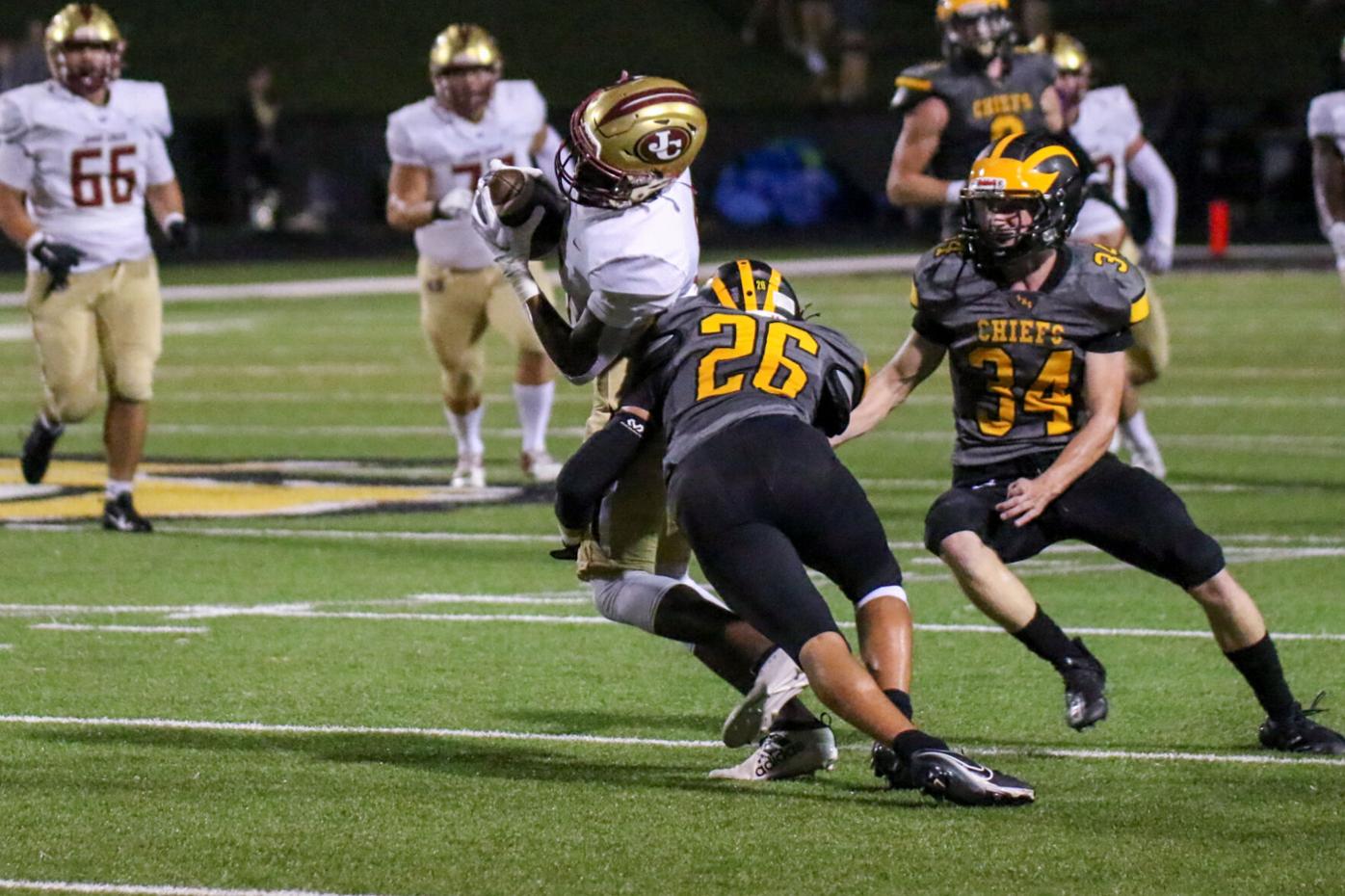 Carter Sandt with the big hit 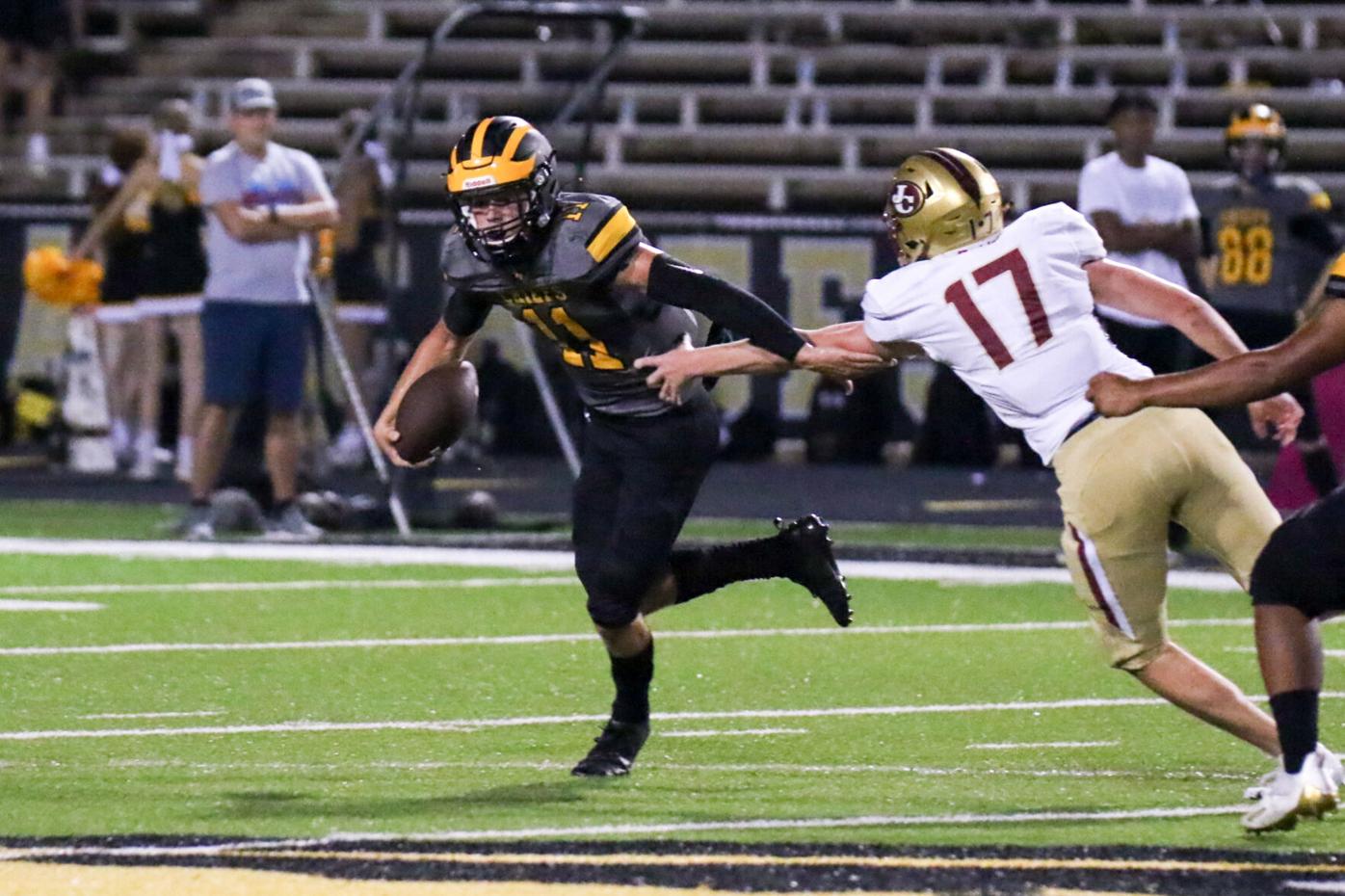 QB Matthew Traynor slips the tackle on the scramble

Matthew Traynor scrambles to the outside

Cameron Massey with the high catch

Jackson Hancock with the carry

Cruz Wright with the carry

Brady Curl with the tackle

Chiefs Cameron Massey(27), Chris Miller(5), and Izaiah Sanders(7) team up for the tackle

Jackson Hancock through the gap

Carter Sandt with the big hit

QB Matthew Traynor slips the tackle on the scramble

CANTON -- With under a minute to go in the third quarter, Sequoyah scored a momentum-shifting touchdown and 2-point conversion to bring the deficit to seven.

One play later, though, Johns Creek answered with a 70-yard kickoff return for a touchdown.

The explosive return all but sealed the Chiefs' fate in the 41-20 home loss to the Gladiators on Friday night at Skip Pope Stadium.

"I thought that, when it got to 27-20, that we were right back to the week we played Cherokee,” Sequoyah coach James Teter said. “If we get a stop here, we are where we want to be. We had a whole quarter on offense where we were wearing them down a bit. Then we gave up the kickoff return, and all the energy got sucked right back out of us.”

Teter said he felt good about Sequoyah’s chances going into the fourth quarter, if the score stayed at a seven-point deficit. However, all the momentum was taken from the Sequoyah sideline once Johns Creek's Josh Thompson went the distance.

It was a gritty, hard-fought game until the fourth quarter. Both teams ran the ball well, but Sequoyah (2-2, 0-1 Region 7AAAAAA) struggled to move in the passing game. The Chiefs were led by Peyton Lucas and his 68 rushing yards.

Lucas added 58 yards and a touchdown through the air, accounting for a large portion of quarterback Matthew Traynor’s 95 passing yards on the night.

Johns Creek (3-1, 1-0) also showed how dominant it could be in the run game. The Gladiators were led by Tylan Johnson, who rushed for 145 yards, including a 35-yard touchdown run. Quarterback Kyle Durham was also a factor in the run game with 37 yards and a score.

Turnovers were an issue for Sequoyah. Multiple lost fumbles set the Chiefs’ defense up in difficult situations after the unit had found its footing. The defense made a strong goal-line stand, forcing a field goal rather than allowing a touchdown to make it 17-6.

“I thought, defensively, we played much better in the second half,” Teter said. “They did bend a little bit, but they did not break. In the first half, we missed some assignments, but we will make the adjustments, fix some things and get a little better.”

Heading into a bye week, Sequoyah will be spending time on its passing offense in an effort to be more dynamic. The Chiefs are a run-first team, but Teter knows his group will need to be more effective in the passing game moving forward.

“There are going to come games where we have to throw it a bit, and we need to get better at it. We are better than we were, but we are a running team,” said Teter, whose team will travel to archrival Creekview on Oct. 1. “We are going to establish the run early.”