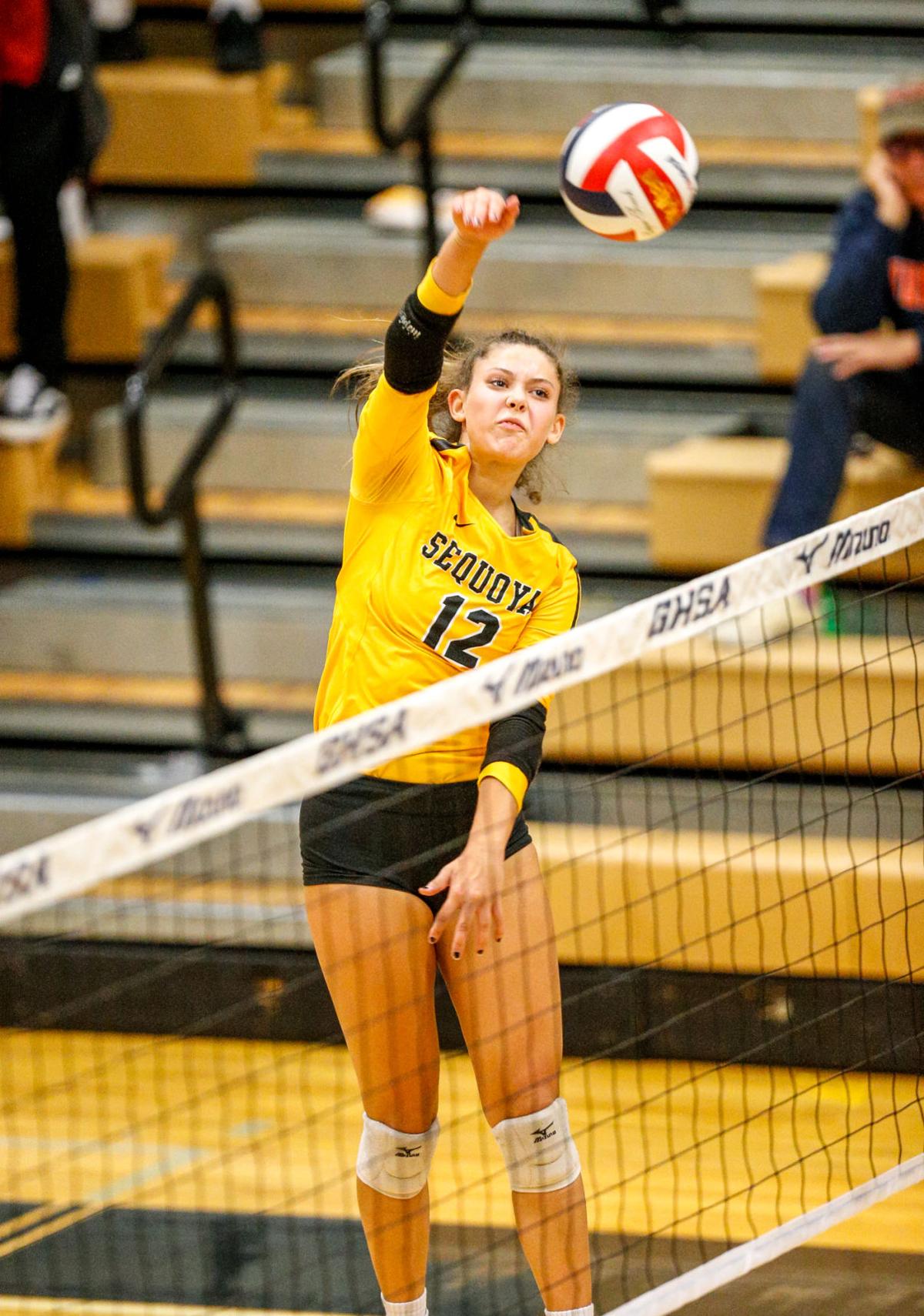 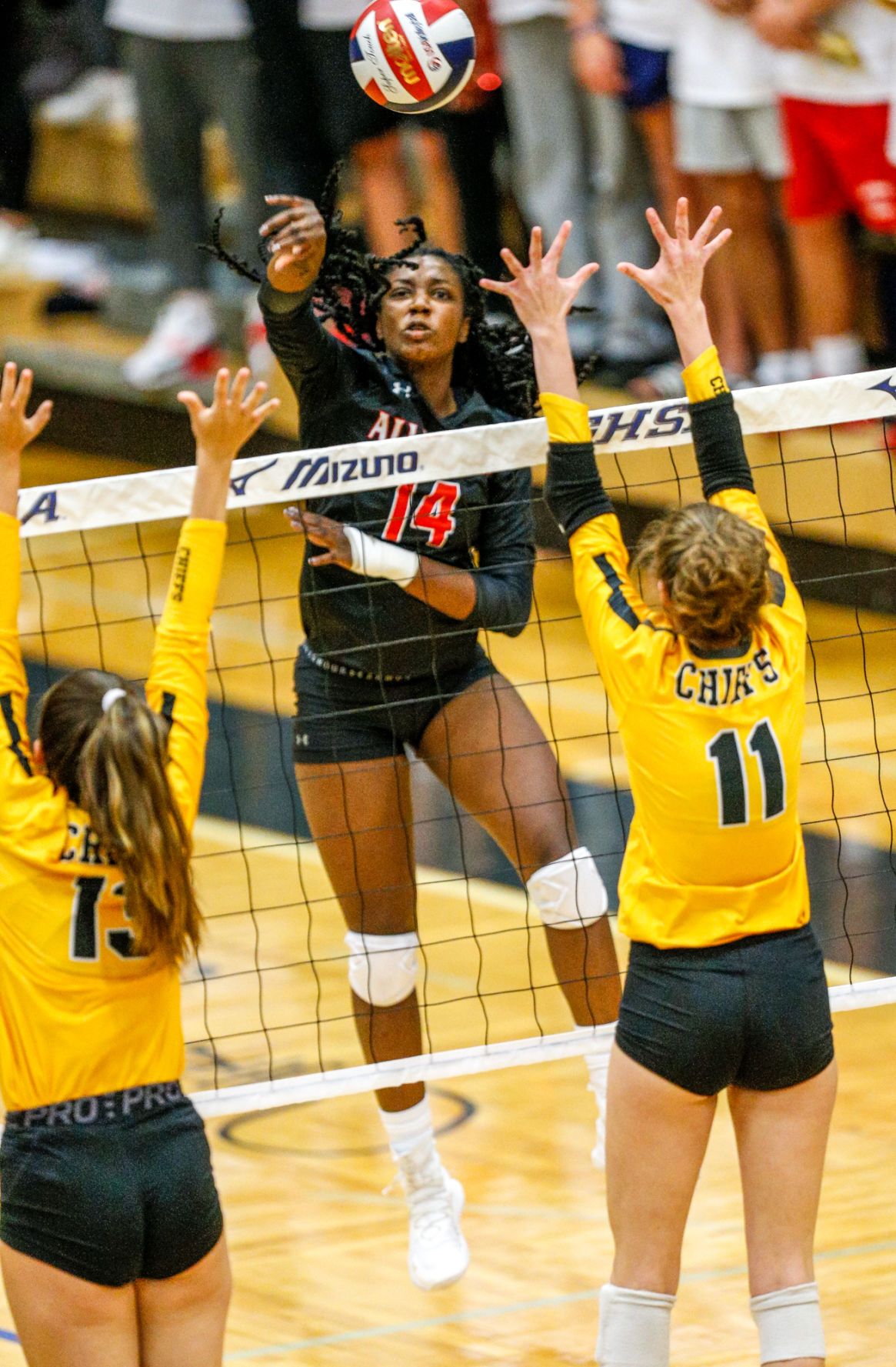 Allatoona’s O’Niece Roberts (14) leaps for a ball during the State Volleyball Championship game against Sequoyah. 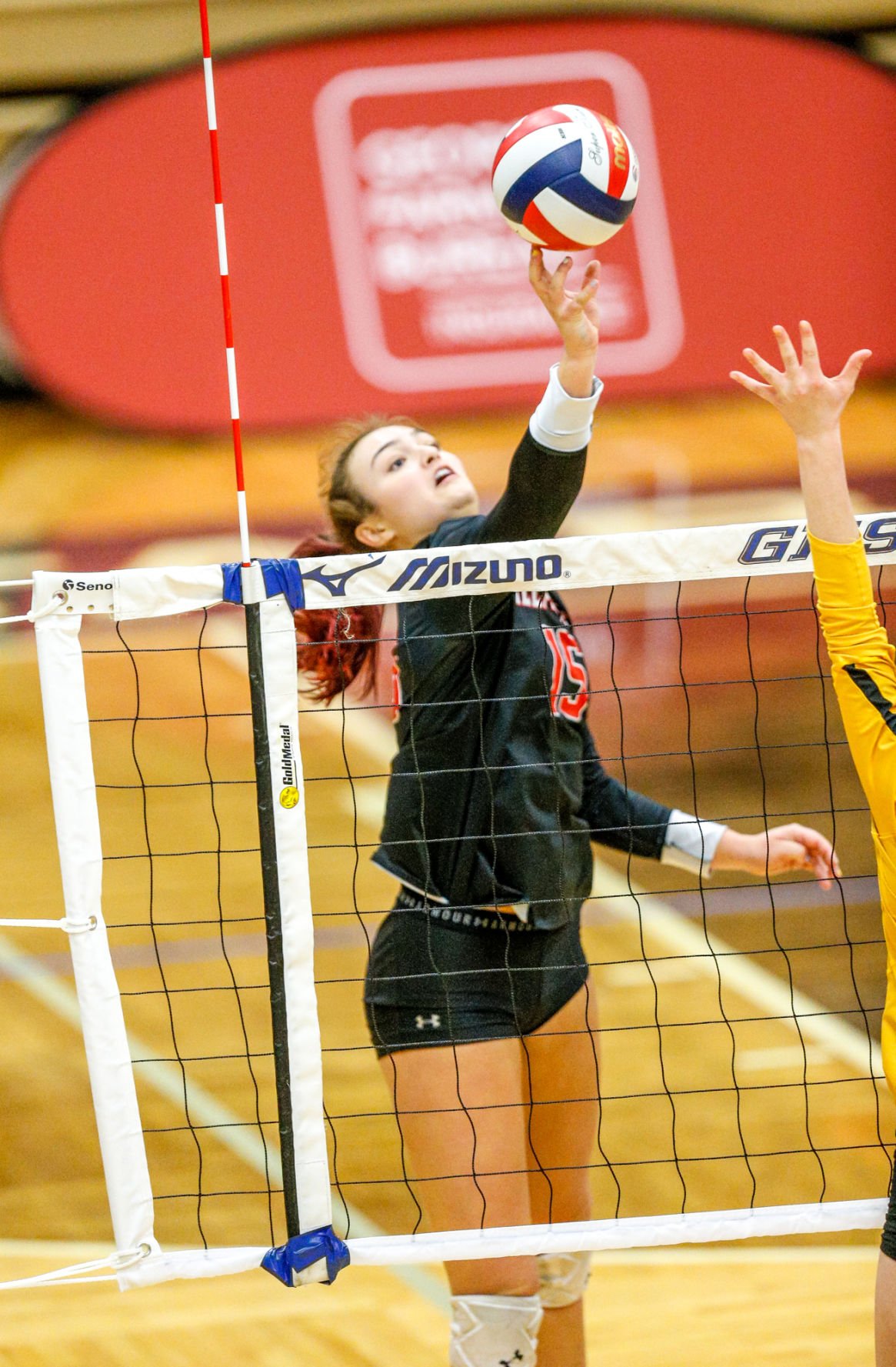 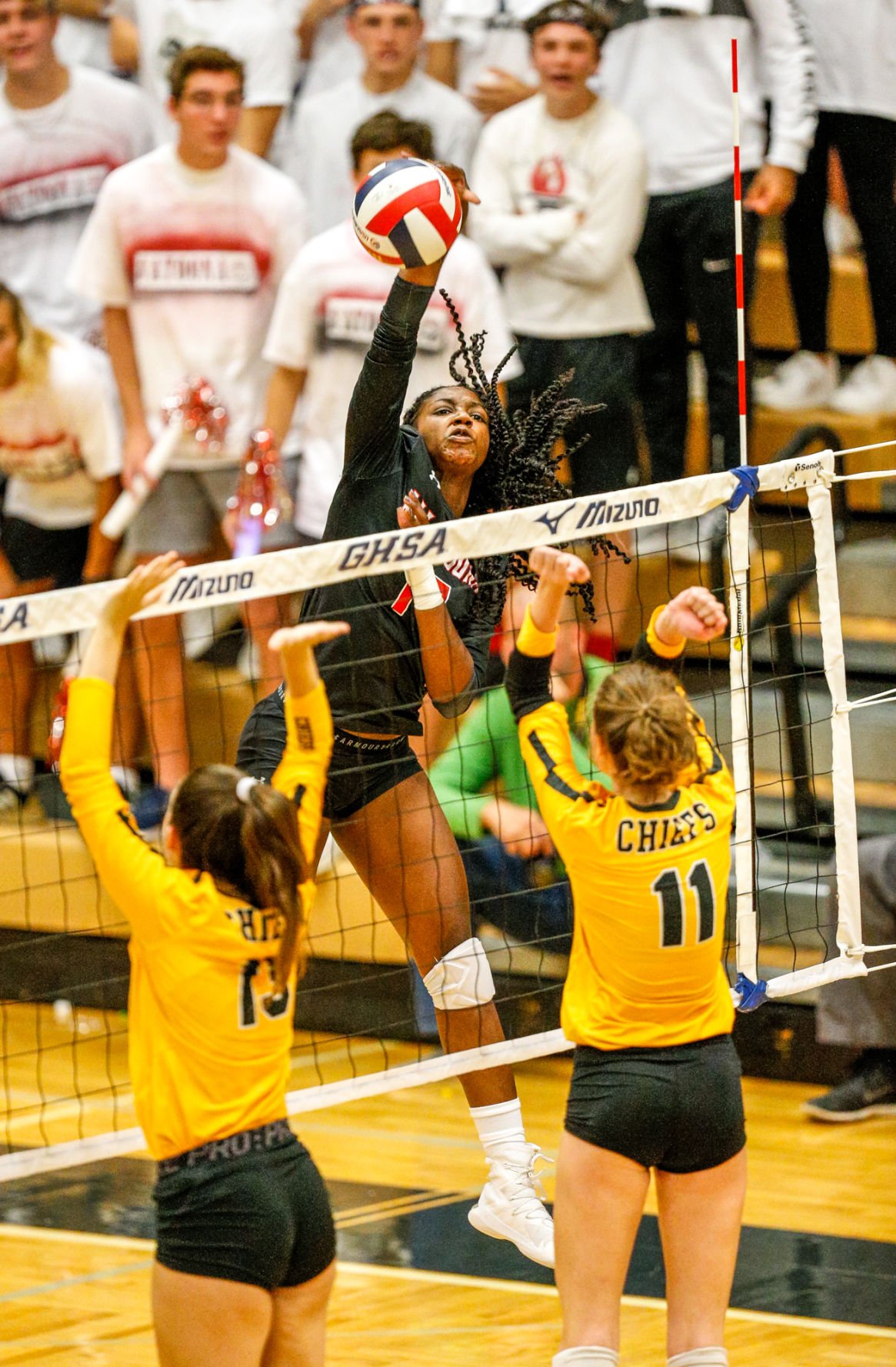 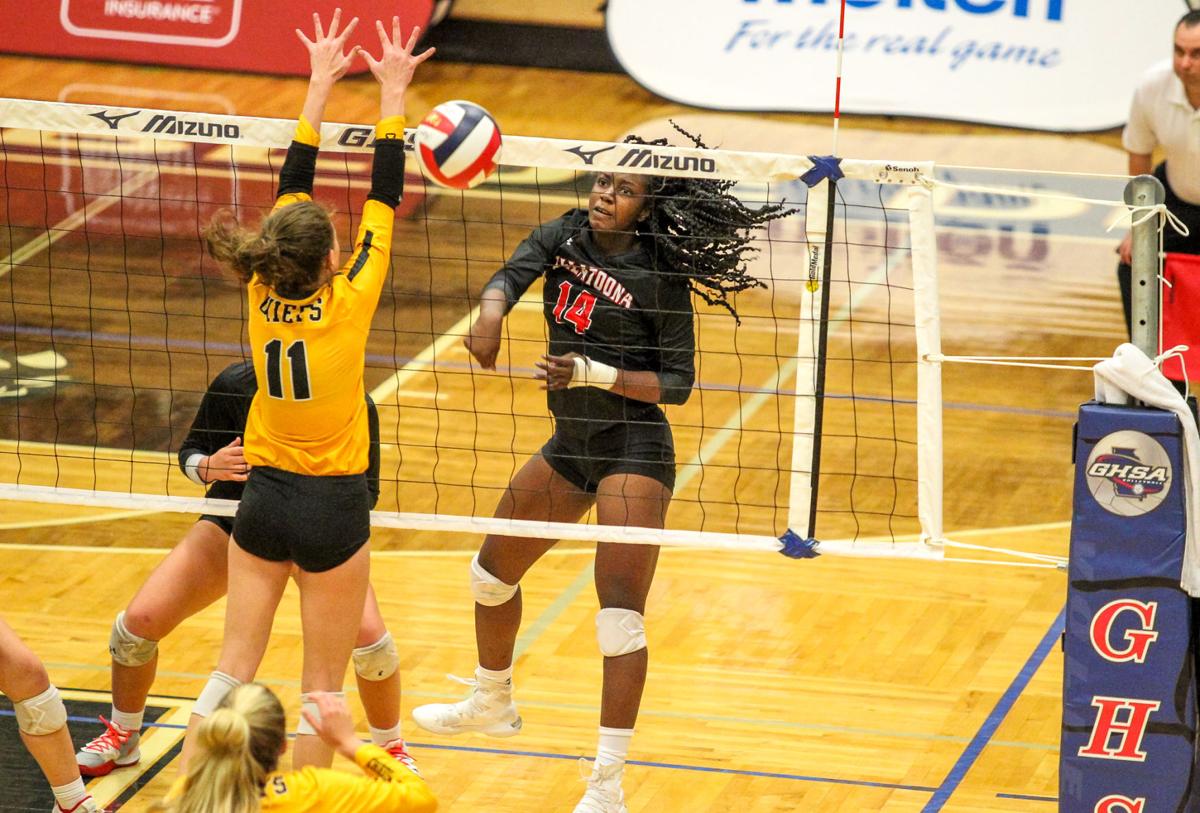 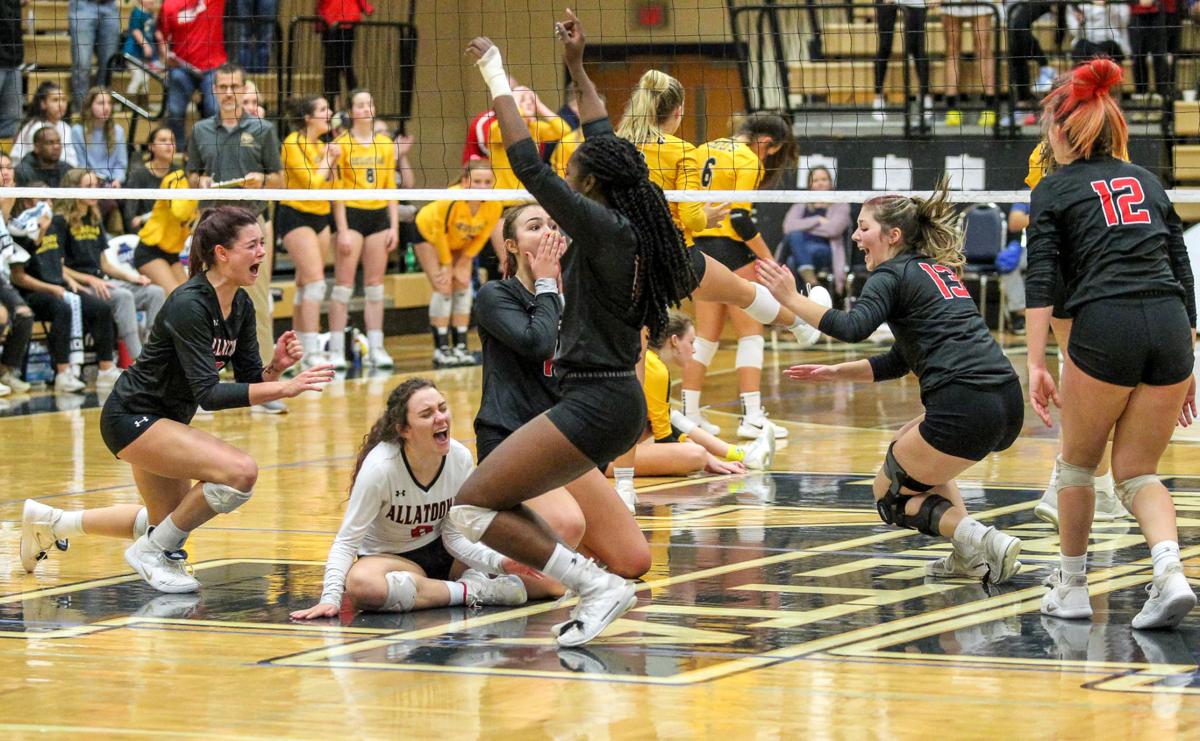 Allatoona’s O’Niece Roberts (14) leaps for a ball during the State Volleyball Championship game against Sequoyah.

Saturday night at the Marietta Garden, it was the team that had been there before who came out on top.

One year removed from a runner-up finish to Pope, Allatoona redeemed itself to claim the program’s first state championship.

“We were here last year, and we played fearful last year,” Allatoona coach Joseph Soley said. “We didn’t have fear tonight. (Sequoyah) beat us three times this year, but I guess fourth time was a charm.”

Led by its six seniors, Allatoona (37-14) handed Sequoyah only its second loss all season.

After the Lady Chiefs (42-2) took the first set, Allatoona’s Chamblee Russell, Callie Miller and O’Niece Roberts began to assert themselves at the net. Trailing 21-20 in the second set, Allatoona scored the next five points to tie the match 1-1.

Sequoyah took early leads in both the first and second sets, but the third set saw neither team separate itself until the final point.

After three consecutive blocks at the net by Sequoyah’s Paige Powers, the Lady Chiefs led 13-8 and looked to be gaining momentum. Allatoona, however, rattled off the next 10 straight points to reclaim control. Both teams had multiple set-point opportunities, and with the score tied at 27-all, Allatoona scored the next two points to take the pivotal third set.

“Last year, we walked in (at the state championship) and it felt like there were a million people in the stands,” Russell said. “This year, it felt like any other match — a business trip that we just needed to take care of. It feels like we closed a chapter. Ending on a win is a really big accomplishment, and I’m really proud of our whole team.”

After Sequoyah fought back to take the fourth set, Allatoona’s experience seemed to take over in the fifth and deciding set.

The Lady Buccaneers jumped out to an 8-2 lead, forcing multiple timeouts by Sequoyah. The Lady Chiefs once again battled back and trailed 13-11, but the deficit was too big to overcome as Allatoona took three out of the next four points and claimed the set 15-12, giving itself the state title.

“I think it really was a mentality that we had been here before,” Miller said. “The gym didn’t feel as big as it did last year. It almost makes losing last year kind of sweet in retrospect. It makes it even better to come back and win this year.”

This year’s Sequoyah team was the first in program history to win the region, county and Sequoyah Classic championships. With a number underclassmen in key roles, the future is undoubtedly bright for the Lady Chiefs.

“Sometimes, you don’t win because the other team just played better,” Sequoyah coach John Edwards said. “It’s not that we played poorly. It was just Allatoona was better today. For our team to get here and then to fight back in that fifth set and make it a game, I think it shows you who our players are as individuals. They were going to keep playing until the end, and that makes me very proud.”

After the match, Allatoona celebrated on the court with its student section and moved to an auxiliary gym for a continued celebration with parents and friends. Soley said his team’s motto this year was to focus on the final portion of the climb, and as he passed out the state championship memorabilia, he couldn’t help but beam with pride at what his team had just accomplished.

“We accomplished the goal and got to the end of the rope,” Soley said.

“Our fans came out, our community came out, and our players left it all out on the court. We didn’t play a very good first set, but it didn’t faze our girls because they weren’t going to fear something that wasn’t real. Finishing any sport, the last few steps is the hardest. I had no worries because our girls didn’t see that we were going to fail.”