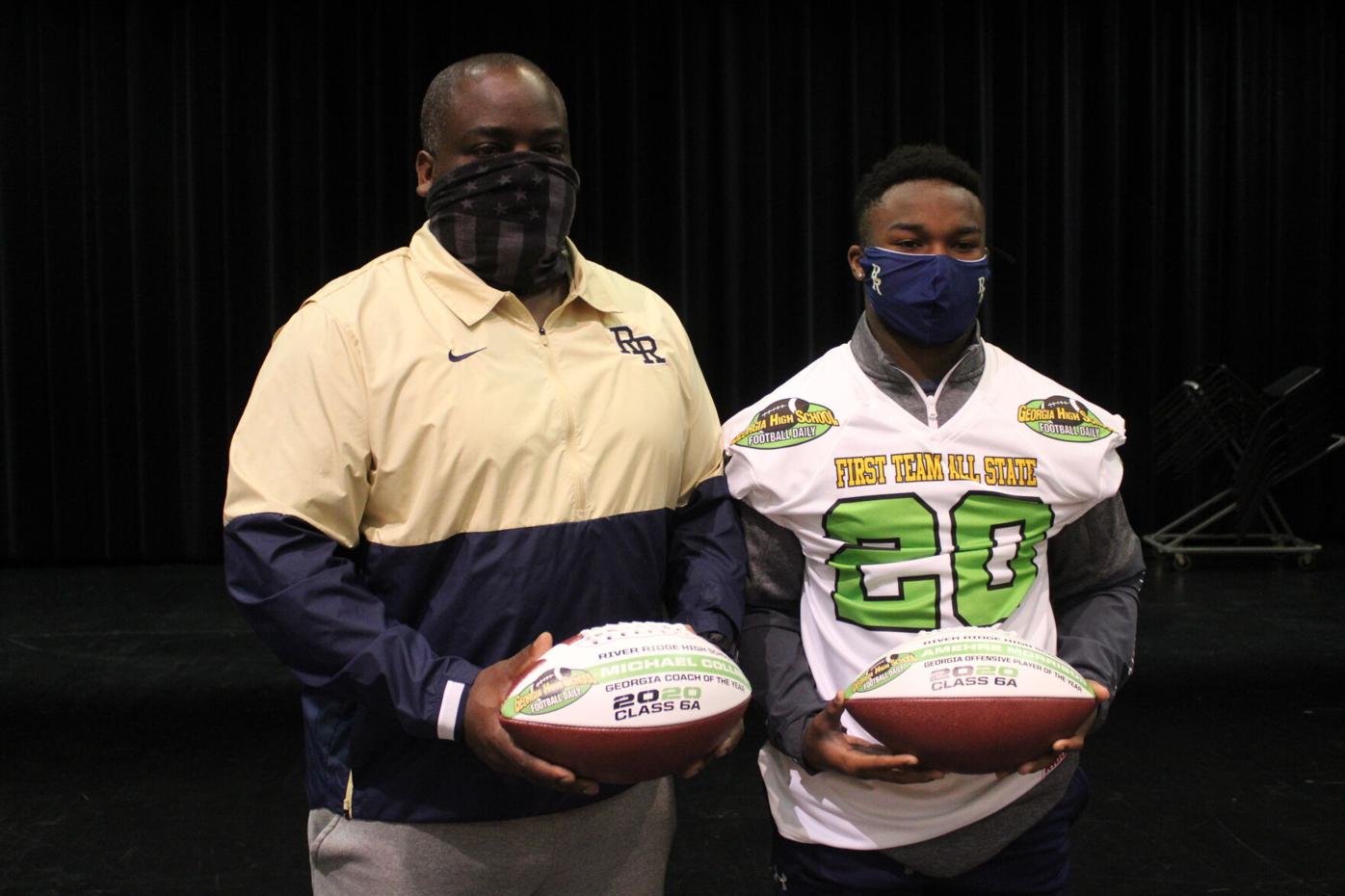 Above: River Ridge coach Mike Collins and running back Amehre Morrison were both honored by Georgia High School Football Daily for their part in the Knights’ record-setting run to a region title, undefeated regular season and the Class AAAAAA state quarterfinals. Below: Morrison poses with members of the offensive line who helped block for him. 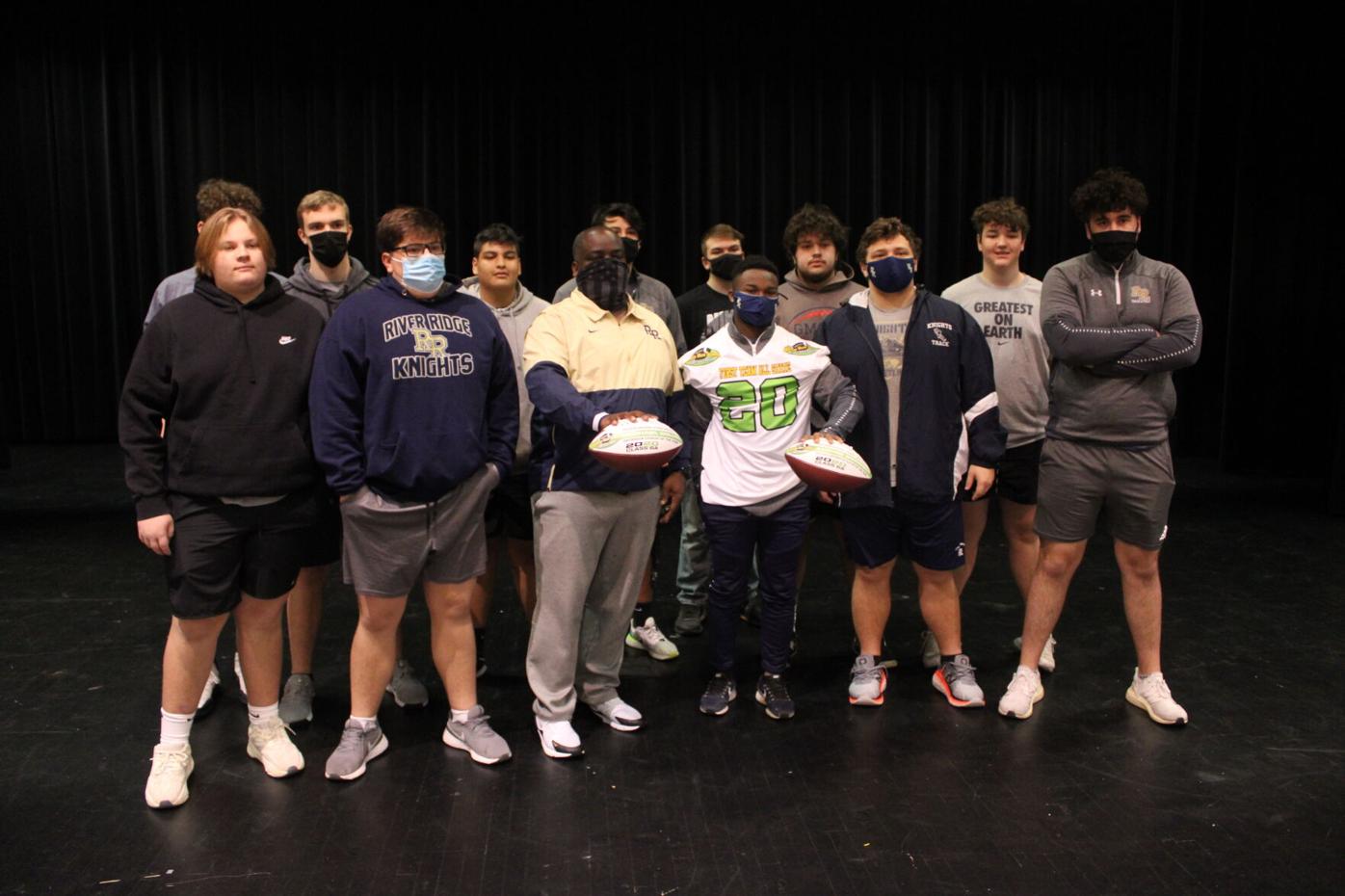 As a show of gratitude from Morrison to his offensive linemen, the group joined in on the celebration of his award.

Above: River Ridge coach Mike Collins and running back Amehre Morrison were both honored by Georgia High School Football Daily for their part in the Knights’ record-setting run to a region title, undefeated regular season and the Class AAAAAA state quarterfinals. Below: Morrison poses with members of the offensive line who helped block for him.

As a show of gratitude from Morrison to his offensive linemen, the group joined in on the celebration of his award.

WOODSTOCK — Coming off of a historic 2020 campaign that saw River Ridge finish with an 11-1 record, both coach Mike Collins and running back Amehre Morrison were honored by Georgia High School Football Daily for their part in making last season a record-breaking one for the Knights.

Morrison and Collins were awarded with the Georgia High School Football Daily Offensive Player and Coach of the Year awards, respectively, Wednesday morning.

Morrison received both player of the year and first-team all-state honors for his record-breaking 1,958 yards and 29 touchdowns on the ground in 2020, along with 24 receptions for 260 yards through the air.

“We didn’t even know if we were going to have a 2020 season, so to be able to have as much success as we did and for me to win this award is a testament to the team and coaches,” Morrison said. “I have to thank my offensive line because, without them, I wouldn’t have had the success that I had. This is really an award for them.”

Morrison said he looks forward to his senior season, and he has high hopes for the team coming off of an historic season.

“Let’s keep this thing moving,” Morrison said. “We have work to do to keep this success going.”

For Collins, a Canton native and Cherokee High School alum, it was an extremely successful second season as the Knights’ coach.

River Ridge earned its first region championship in program history, en route to an appearance in the Class AAAAAA state playoffs. The Knights earned their first playoff win in the first round, defeating Kennesaw Mountain in overtime 35-34.

That victory was followed by a dominating 42-10 win over Rome in Round 2 before the team then lost to eventual state runner-up Lee County in the quarterfinals, 49-31.

The historic season brought a lot of joy and excitement to the River Ridge community, and Collins said he owes it all to the team and the community.

“Football is the ultimate team sport, so when I win an award like this, it is a representation of our team and the work we put in,” Collins said. “I would say this is a community award as well because of the support that was given to us last season. There is no success in this sport without having a group of guys who buy in, as well as support from the community and the school. This award represents all of this.”

Collins added that, coming off of the success in 2020, nothing will change for the football program in its preparations for the upcoming season.

“The preparation for the 2021 season will be the same as it always has and will be, taking it one day at a time,” Collins said. “The only thing I expect our guys to do is to wake up every morning and give maximum effort on everything that we try to accomplish — that being in the classroom, at home and at the drills at practice.”

At its most recent meeting, the Woodstock City Council received the latest update on the city’s housing stock numbers and percentages.