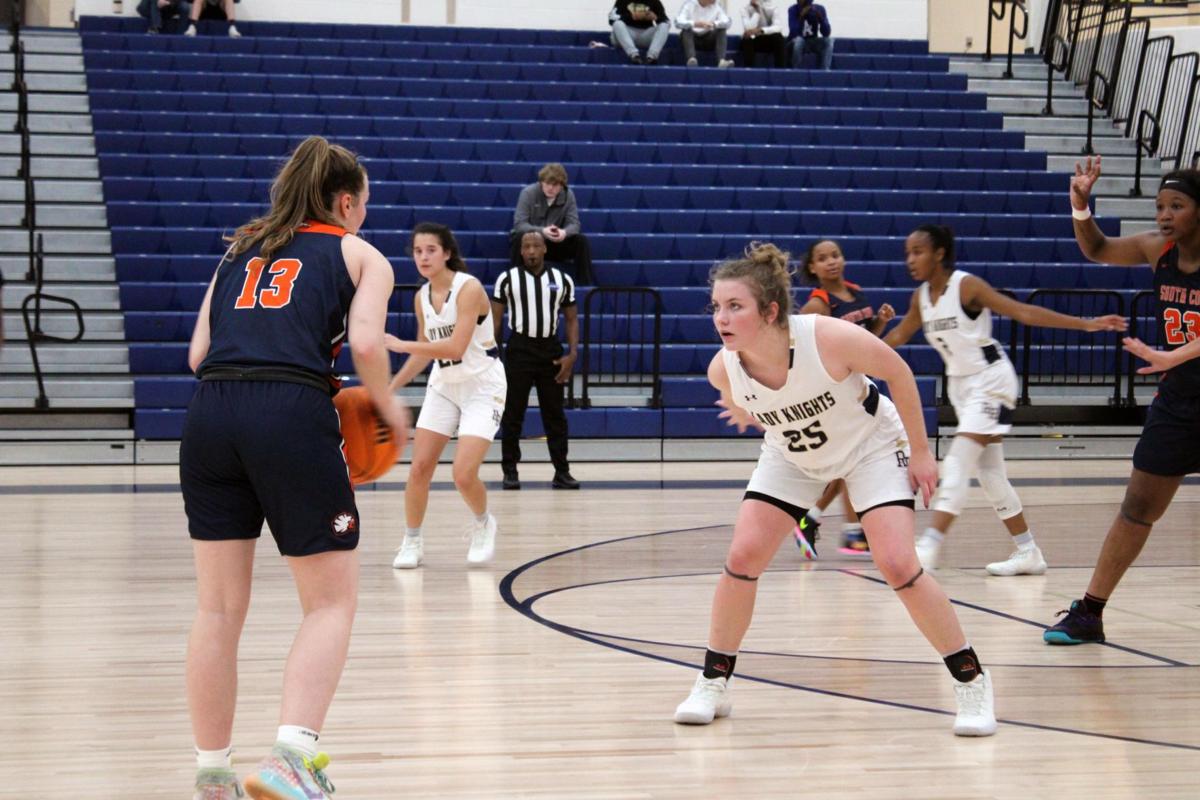 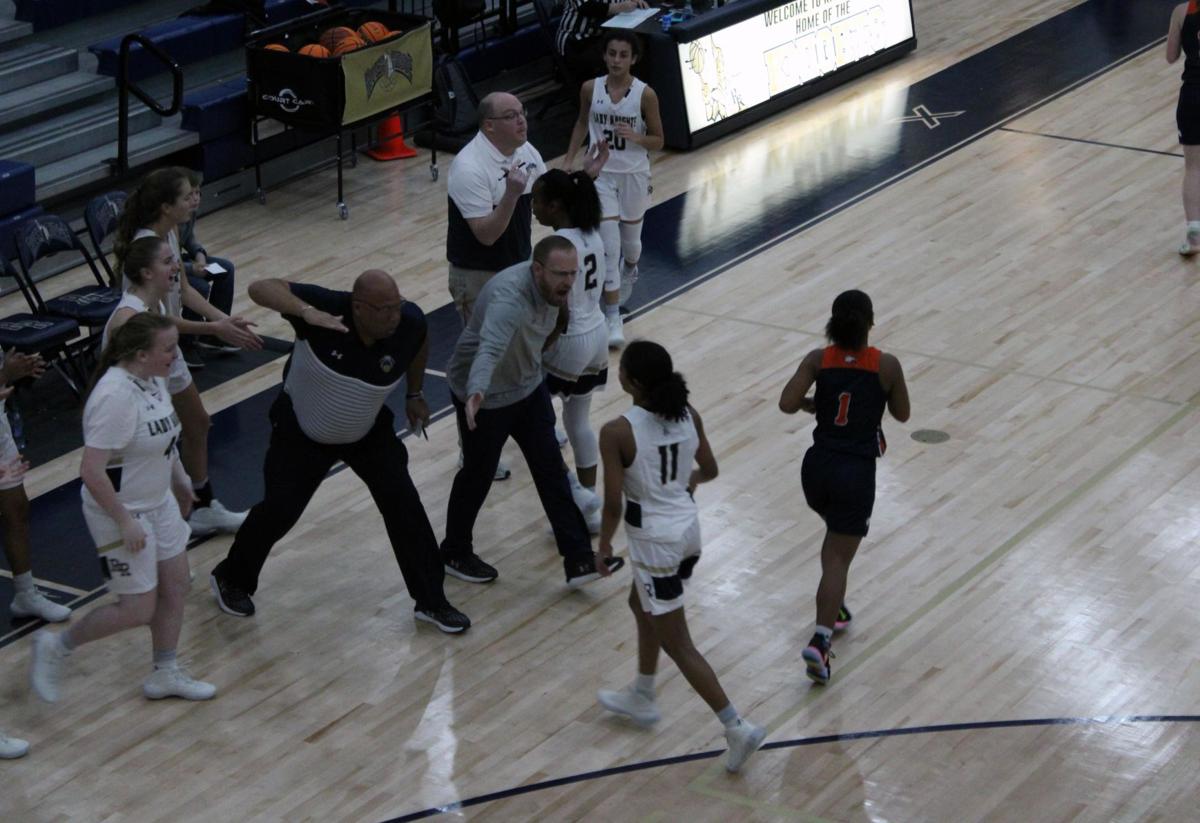 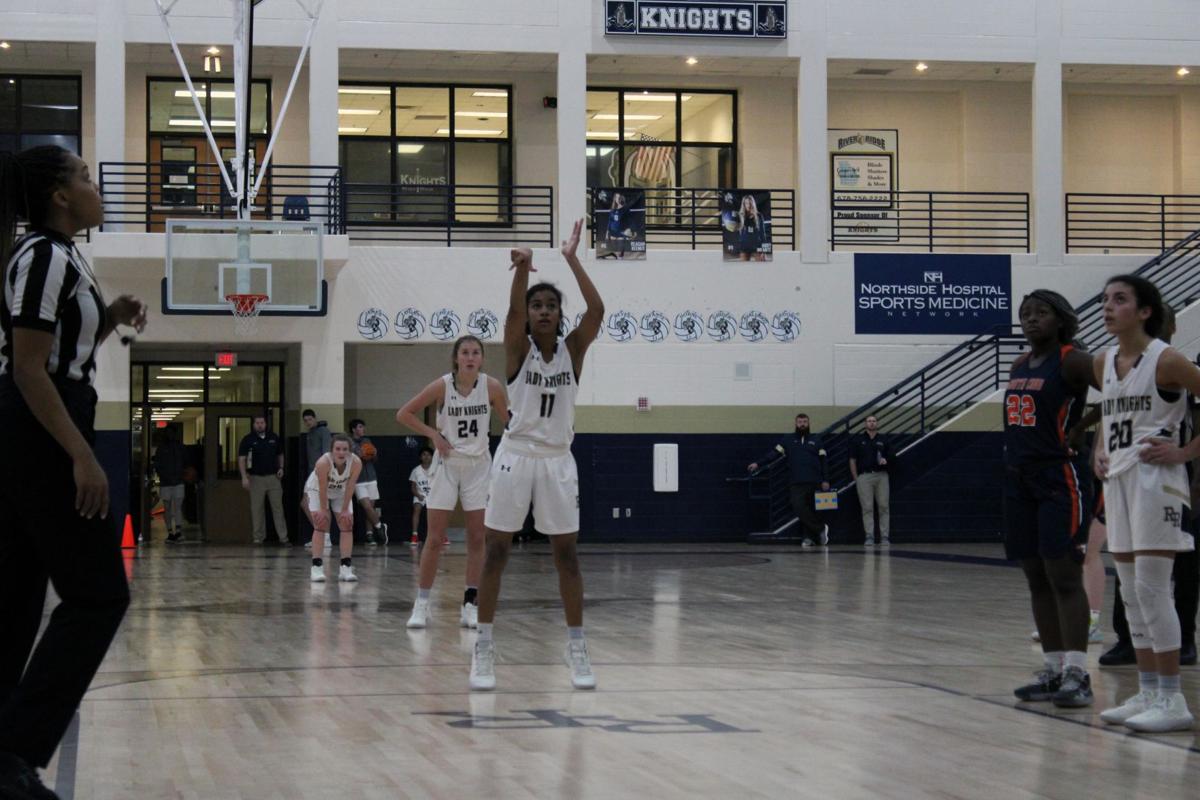 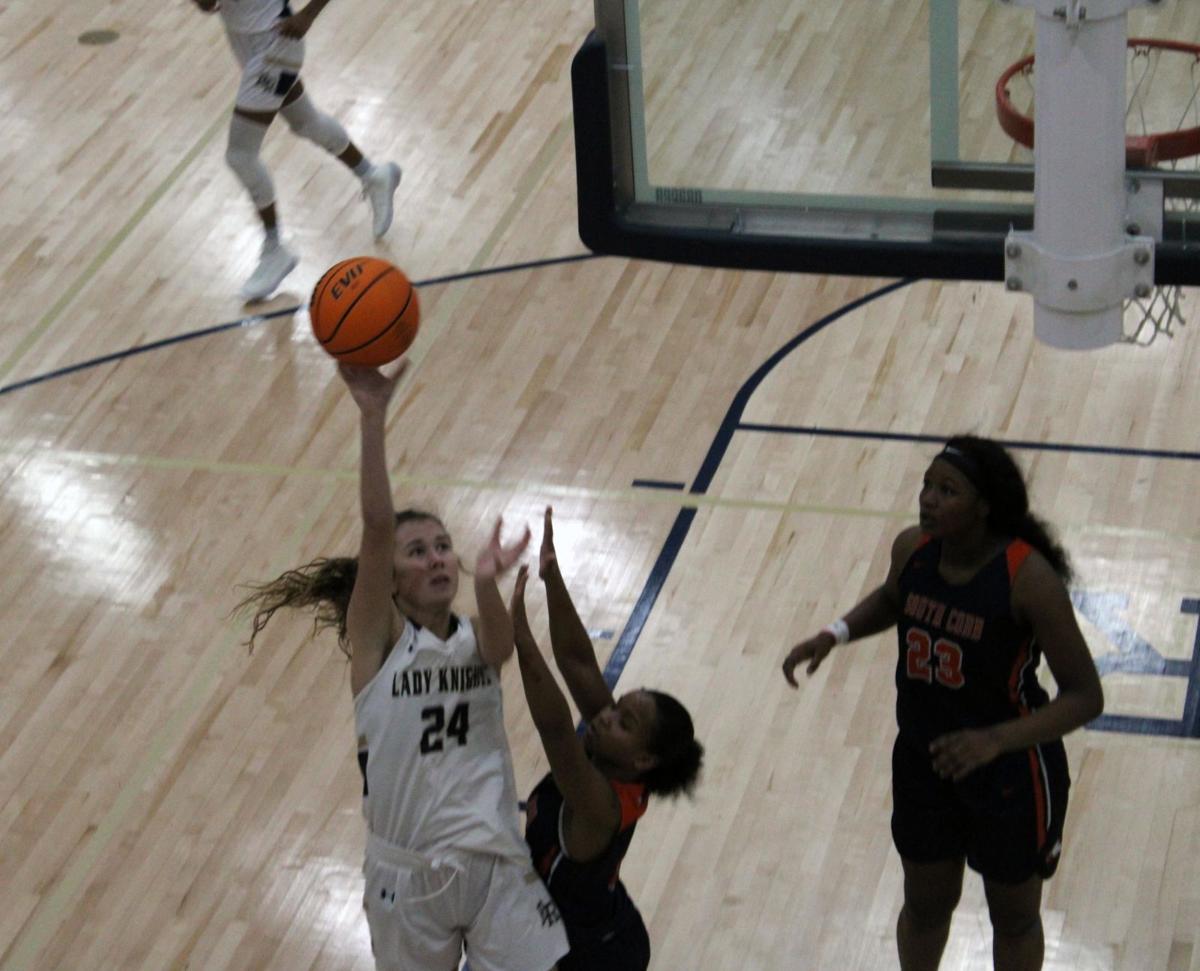 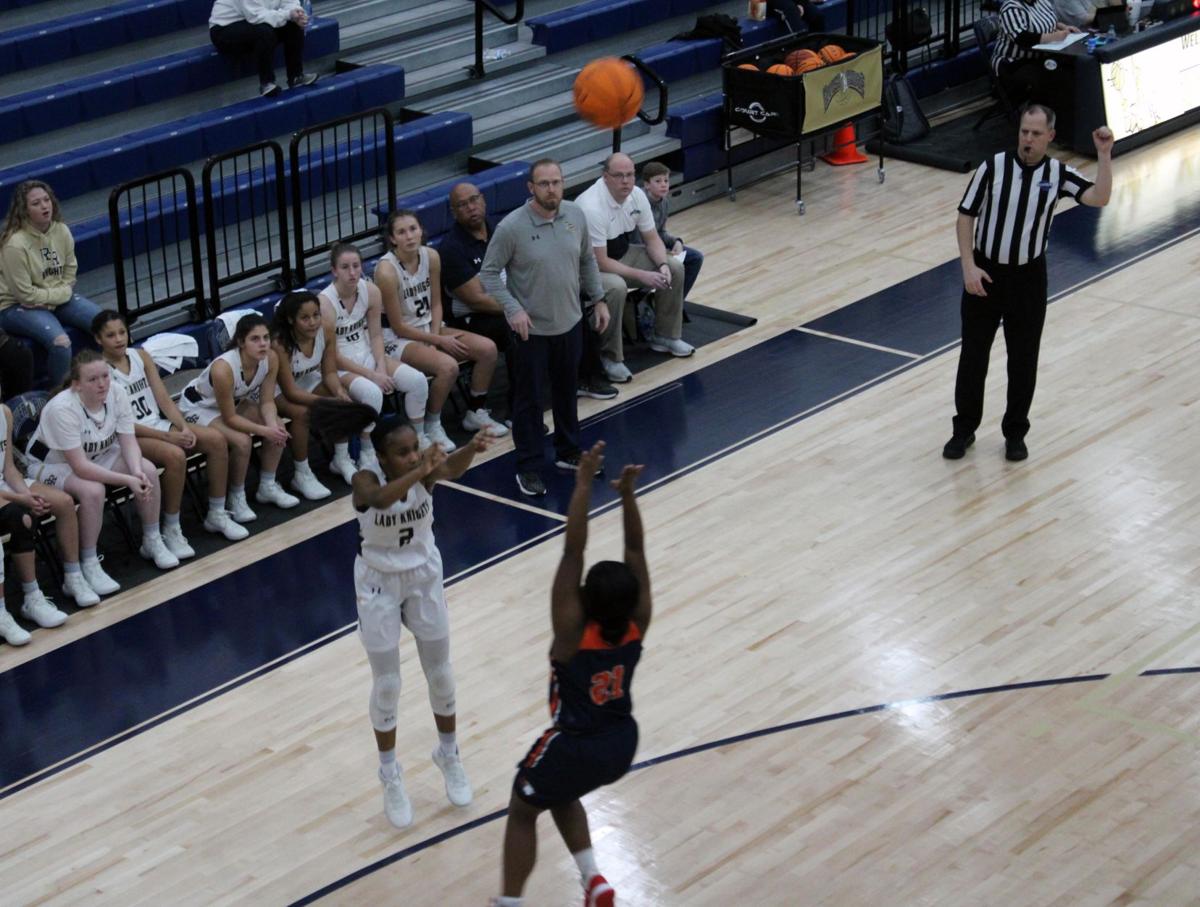 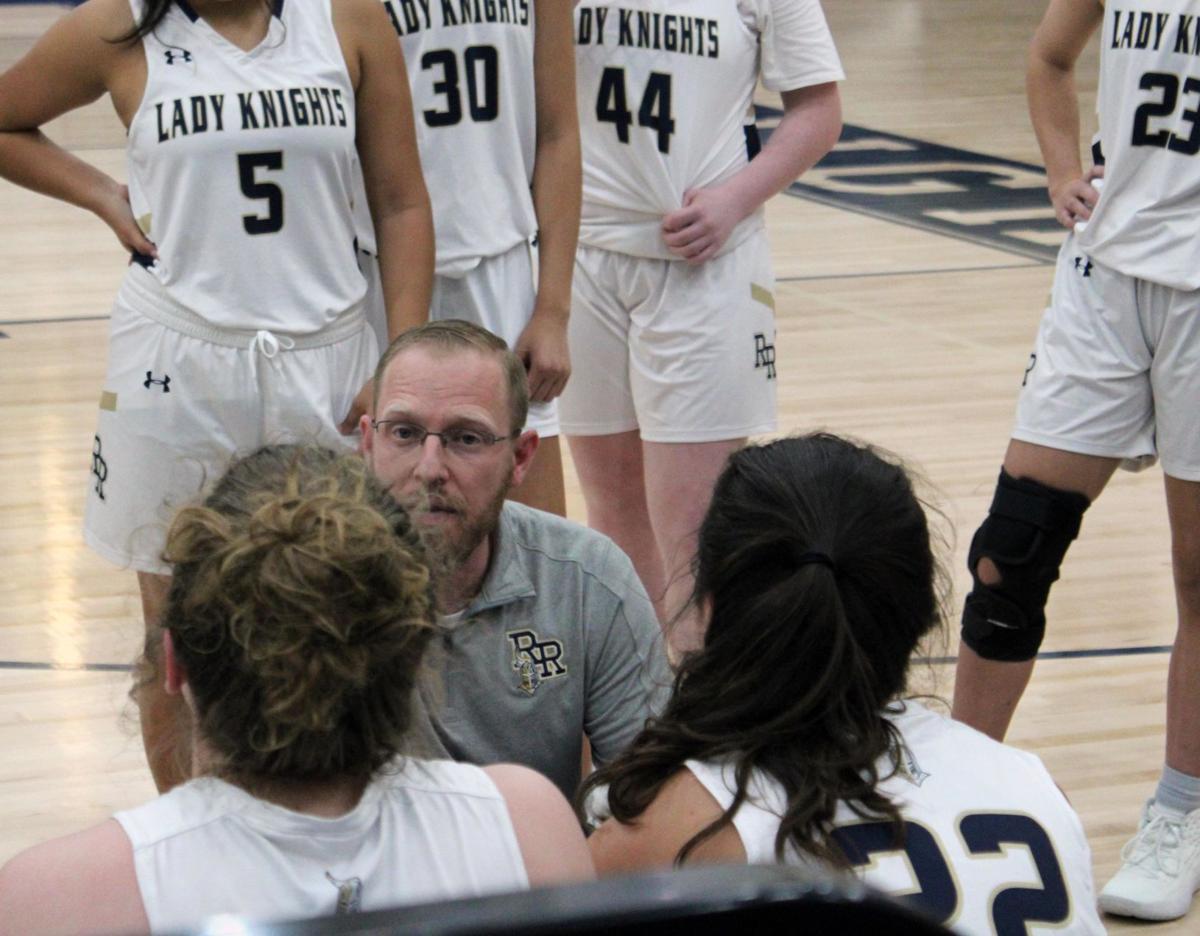 River Ridge coach Jason Taylor talks with players during a timeout on Friday night in Woodstock.

River Ridge coach Jason Taylor talks with players during a timeout on Friday night in Woodstock.

WOODSTOCK - Strong defense in the first and third quarters is all River Ridge needed on Friday night to knock off South Cobb 66-48 in a game between two teams near the top of the Region 6AAAAAA standings.

The Lady Knights (8-8, 6-2) took control of the game in the first few minutes using a full court press defense and opportunistic offense. River Ridge built a 20-5 lead by the end of the first quarter and the game looked to be getting away from South Cobb but the Lady Eagles (8-6, 4-3) responded with force in the second quarter by going on a 14-0 run to open the period.

Lady Knights’ coach Jason Taylor promptly called a timeout to stop the bleeding and reminded his players that the opponent wasn't going to lay down. Led by Taylor Gibbs’ 11 second quarter points the Lady Eagles won the frame 19-5 and trailed 25-24 at halftime.

“I should have called a timeout earlier in the second quarter but we talked about it more at halftime,” River Ridge coach Jason Taylor said. “That second quarter we just got comfortable and out-hustled. We didn’t get any of those 50/50 balls, nobody was diving on the floor and nobody was playing with passion. I think we thought ‘we got this’ but (South Cobb) is a really good team and we had to want it more than them.”

The flip was switched back on in the third quarter as River Ridge’s press seemed to speed up South Cobb’s guards beyond their comfort. Turnovers ensued and the trio of Mataya Gayle, Simone Goins and Emily Paulson were there to take advantage.

Gayle and Goins each scored seven points in the third quarter while Paulson added six. The Lady Knights outscored South Cobb 22-8 in the frame and retook control of the game’s pace.

The Lady Knights started the third quarter on a 12-4 run and a Goins’ 3-pointer followed by Gayle’s steal and layup forced a timeout by South Cobb.

“(Gayle) is the point guard of the future of us,” Taylor said. “That’s where she’ll go play college ball.”

There are a number of really talented freshman in Cherokee County including @Basketball_elle, @etter_mason, @Karson_M1015, and Jada Peterson.Add River Ridge’s Mataya Gayle to that list.Really skilled with the ball and finds teammates with ease. pic.twitter.com/FpanPiCSK5

Paulson and Goins both led River Ridge with 16 points apiece but River Ridge also saw contributions in the post from Sofia Reyes and defensively from Chloe Bedora. Reyes played well on both ends defending Gibbs’ while also adding six points.

Bedora’s only points came on two made free throws in the fourth quarter but her defensive effort on Kennesaw State commit and likely region player of the year Jodi Mullins was a key to victory for River Ridge.

Mullins led South Cobb with 20 points while Gibbs finished with 19.

“(Chloe) is one where she wishes she was producing more offensively but I told her what she does defensively makes more of a difference for us,” Taylor said. “We have other people who can score the basketball but we don’t have anyone else that can defend a player like (Mullins). I thought Chloe guarded her really well.”

River Ridge will play at 6 p.m. on Tuesday at Allatoona.