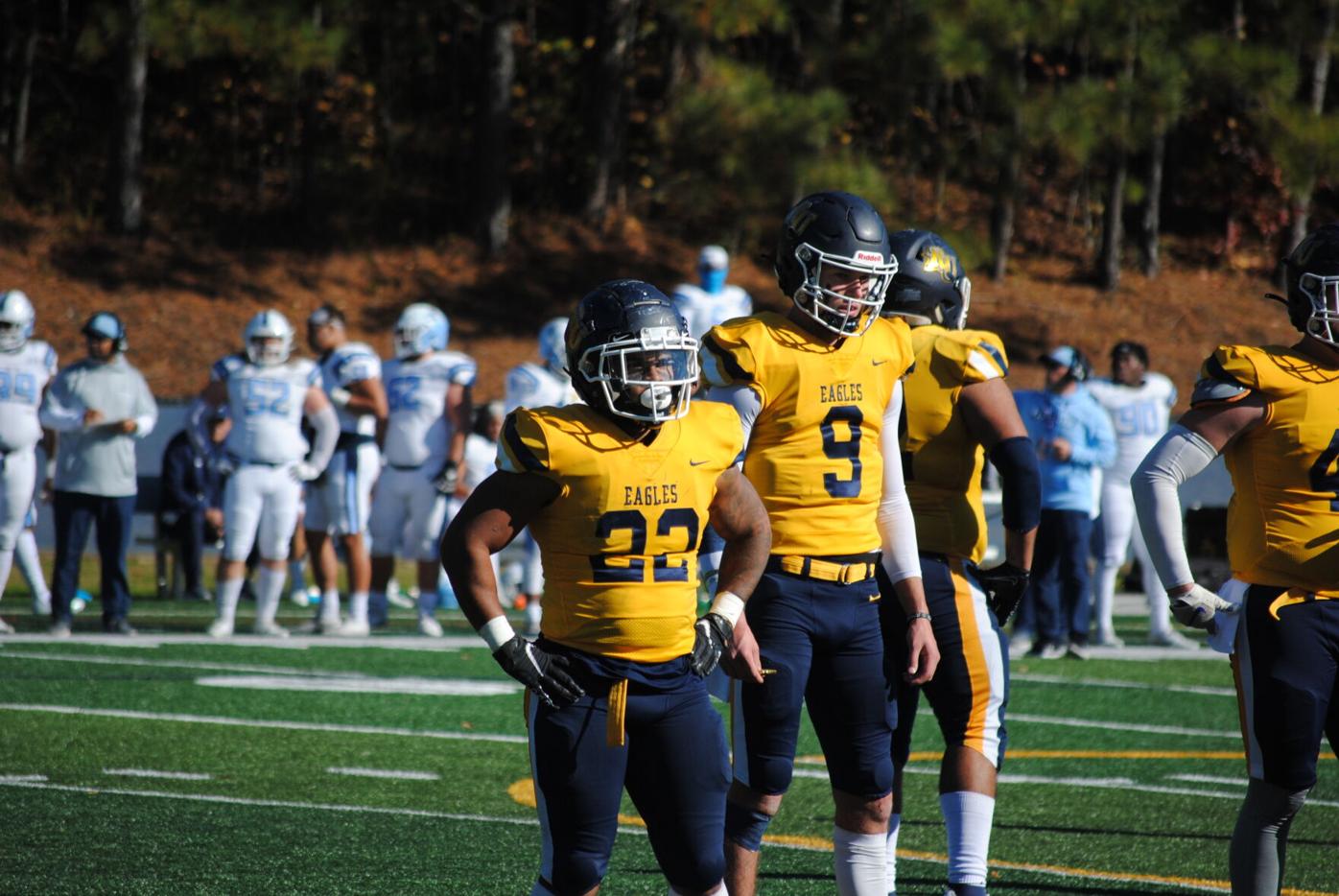 Above: Reinhardt running back Devyn Collins (22) and quarterback Billy Hall look on during Saturday’s game against Keiser in the first round of the NAIA playoffs. The Eagles were unable to stop the Seahawks from scoring late and saw their season come to an end. Below: Reinhardt running back Bryce Burgess makes a push against the Keiser defense. 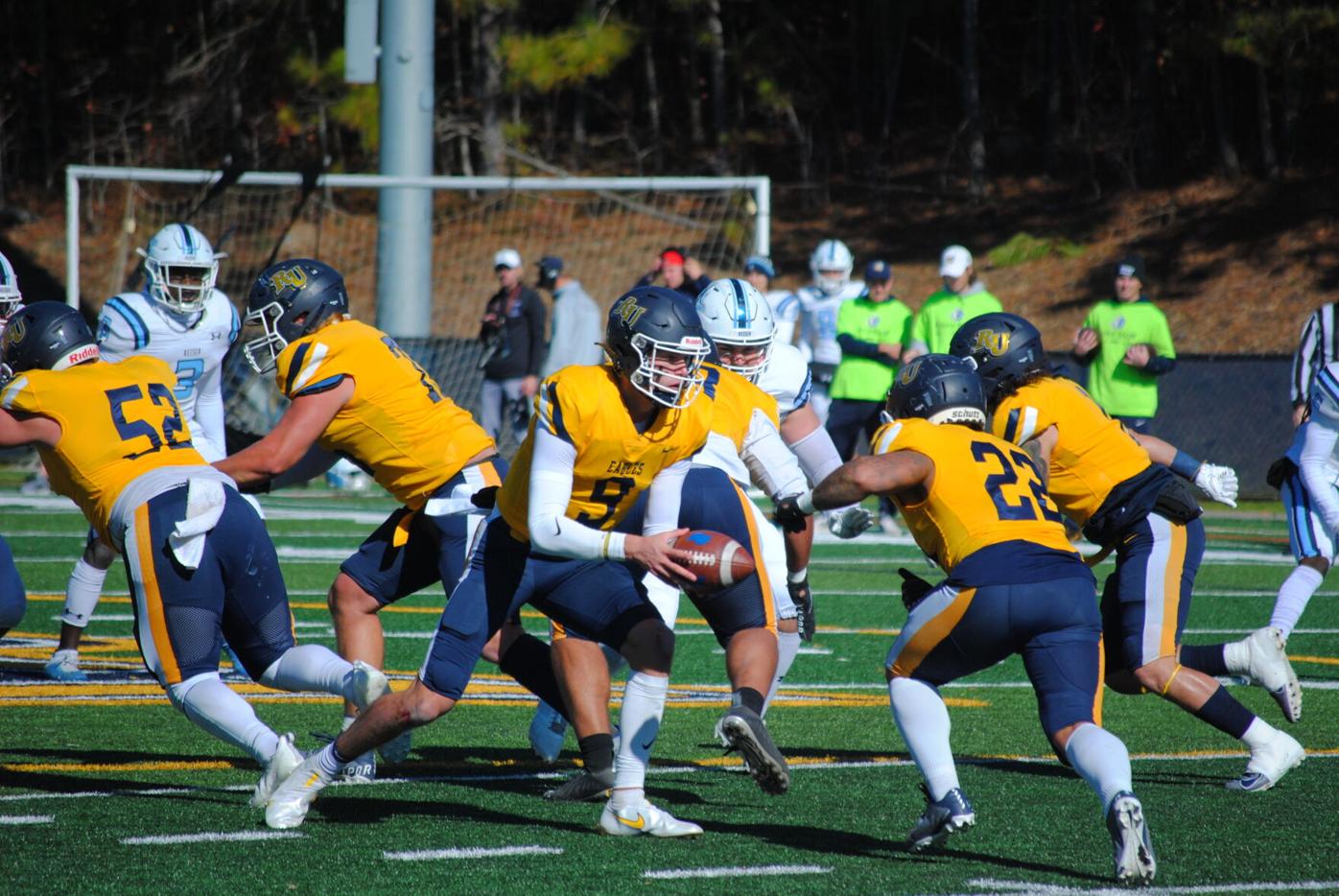 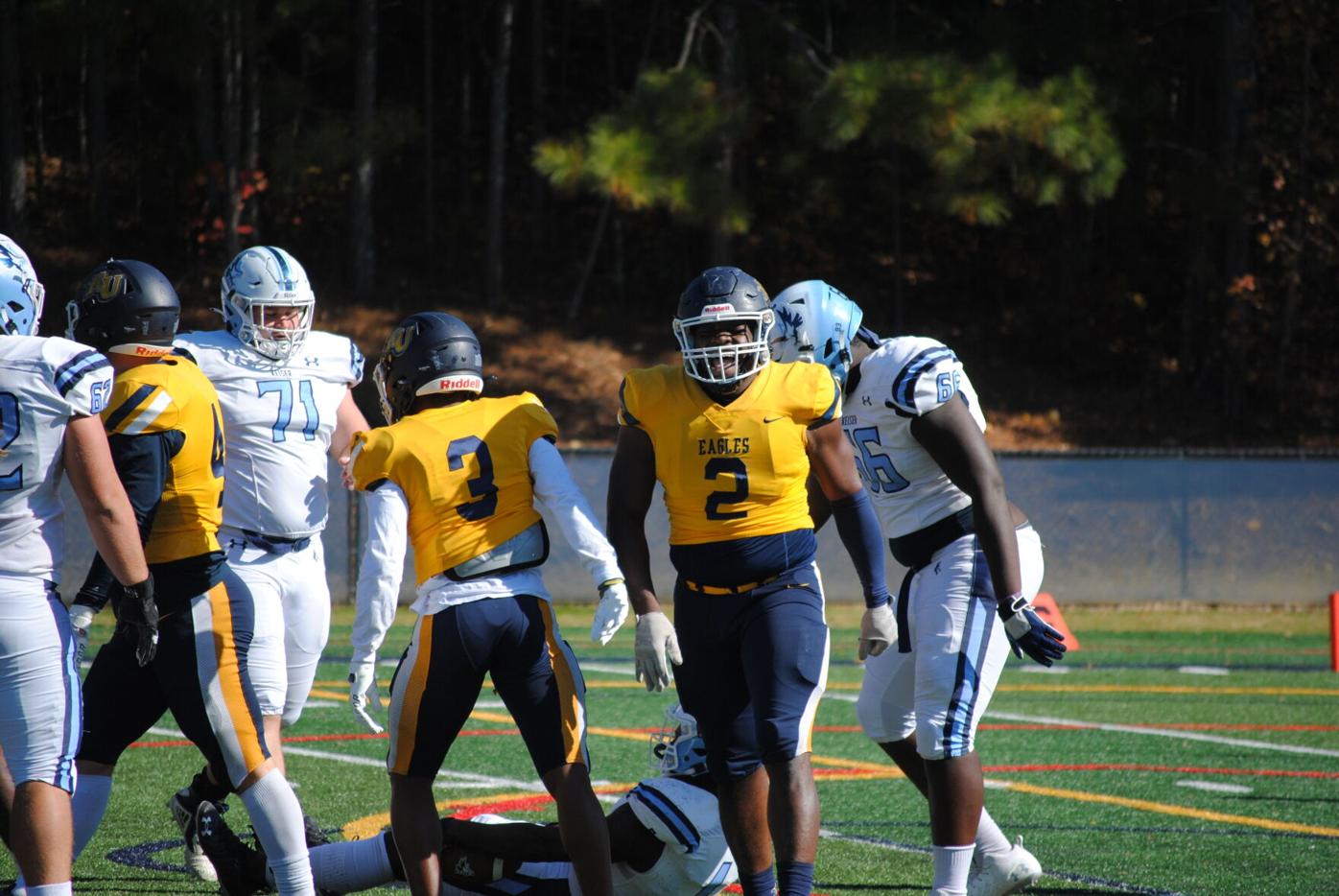 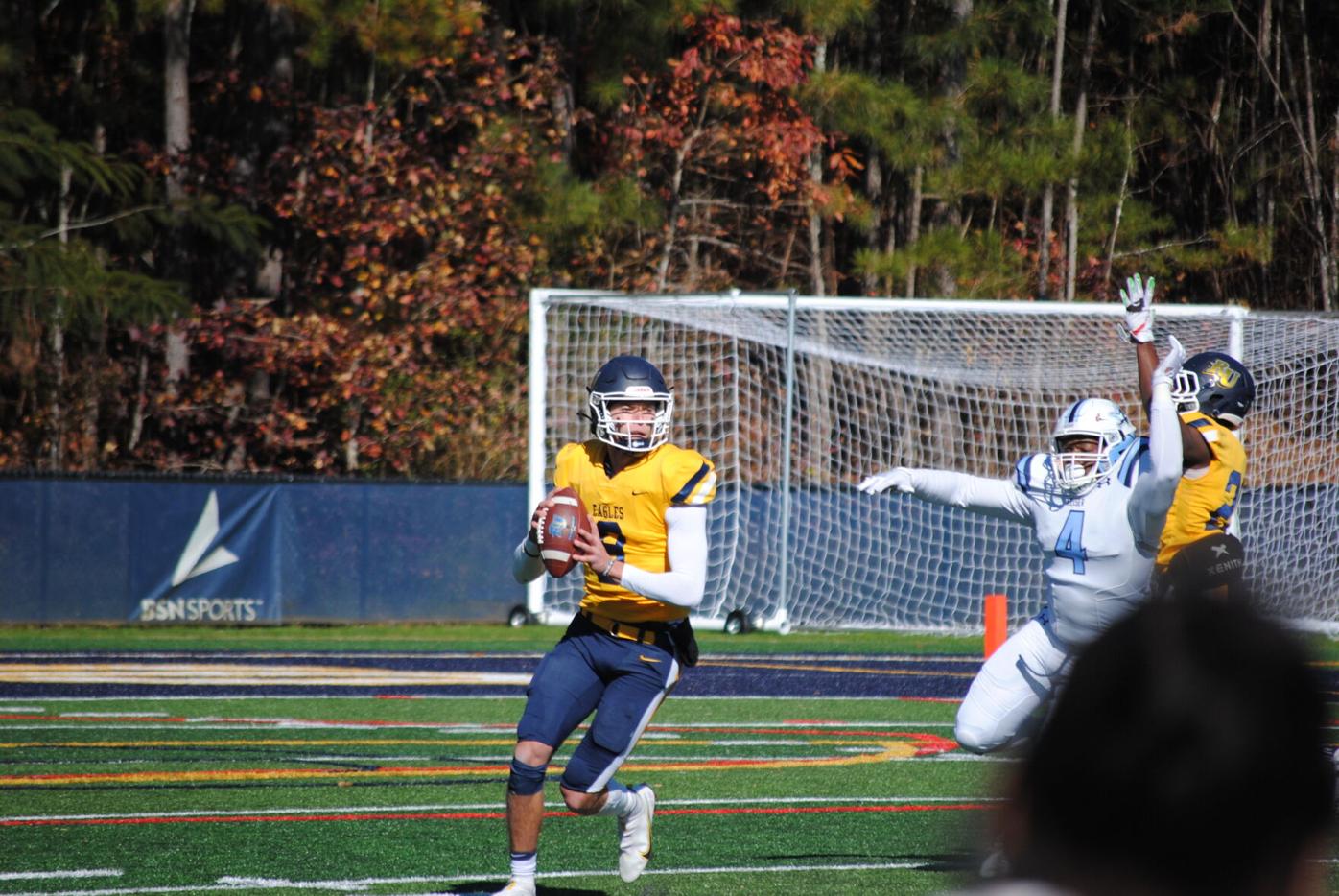 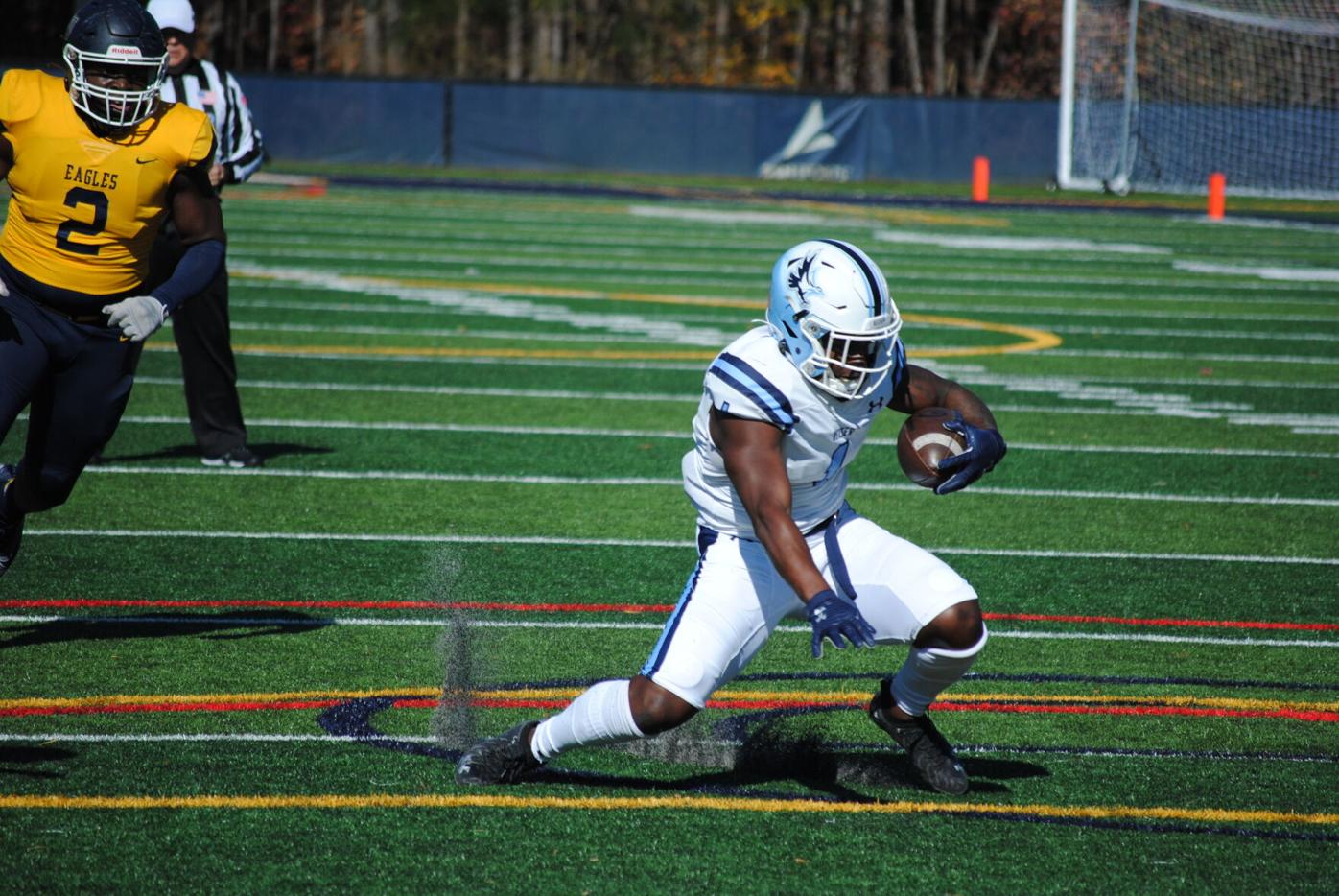 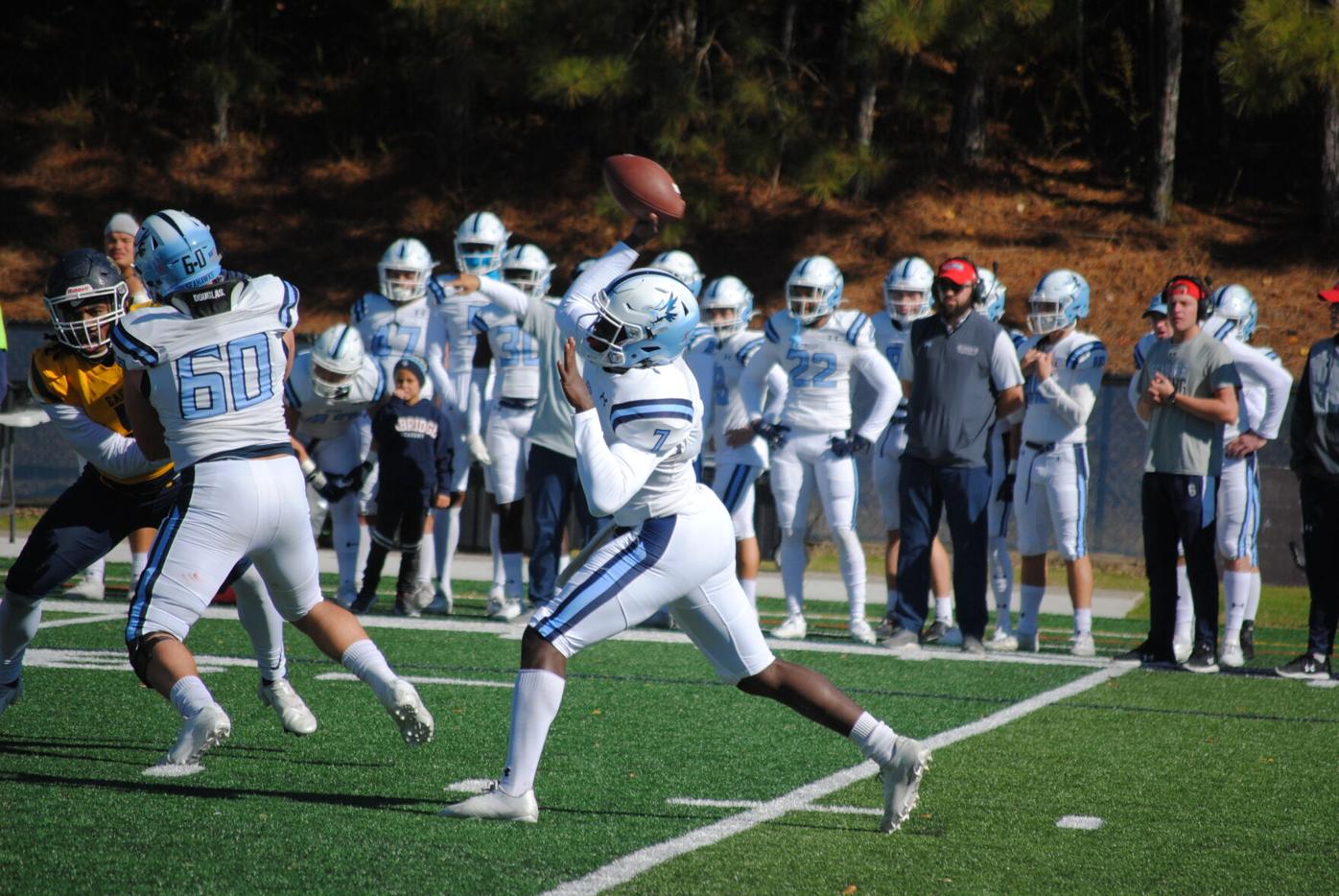 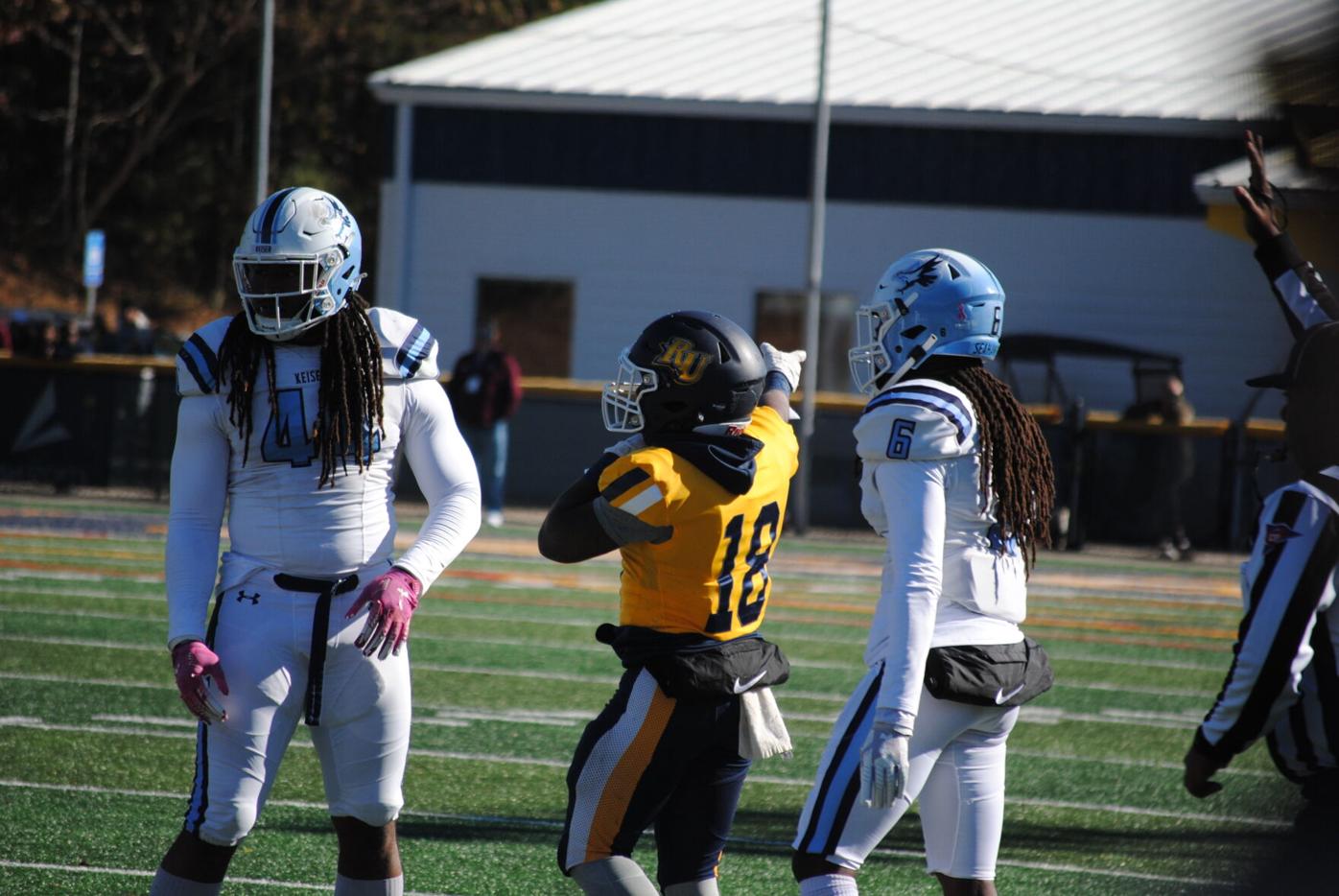 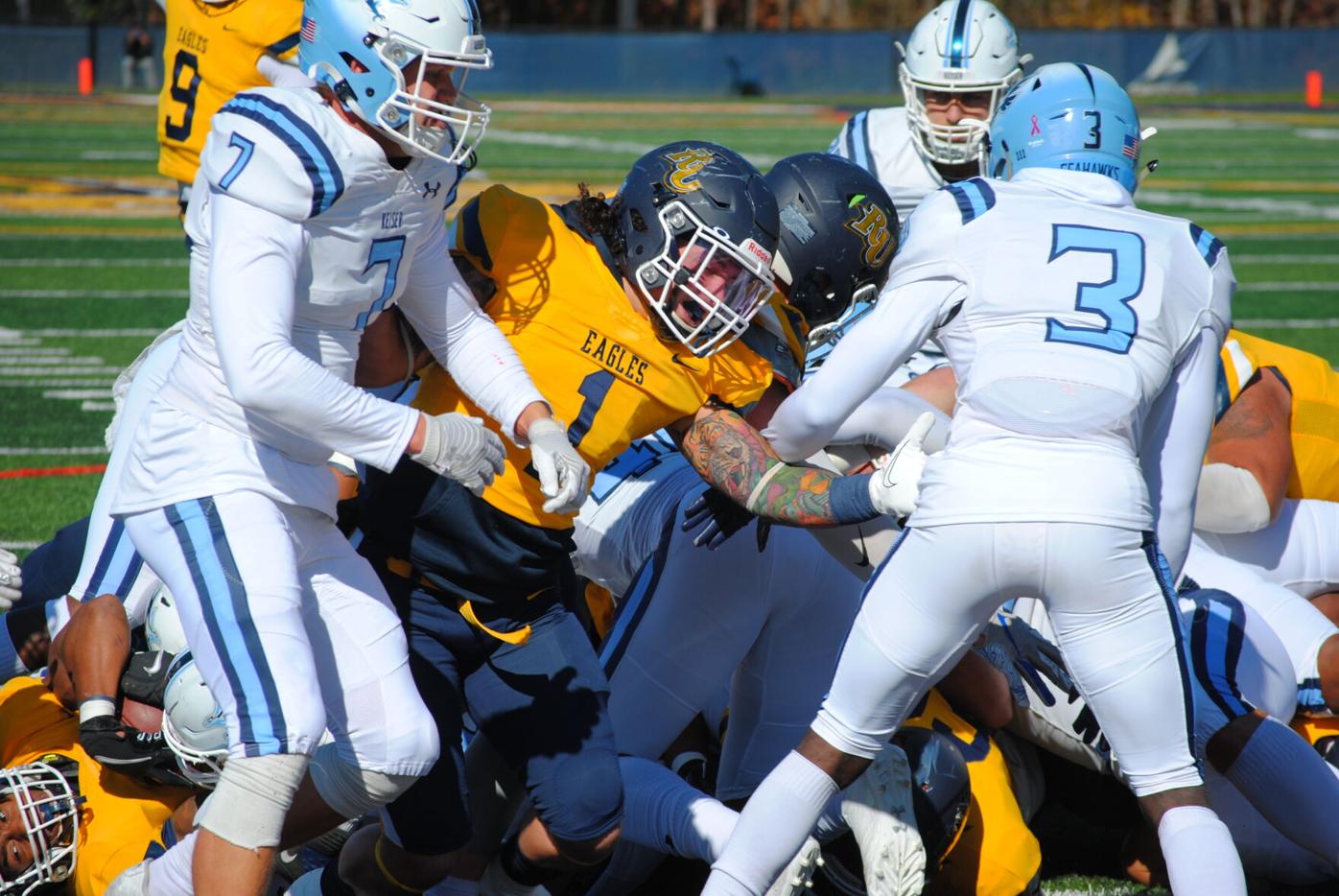 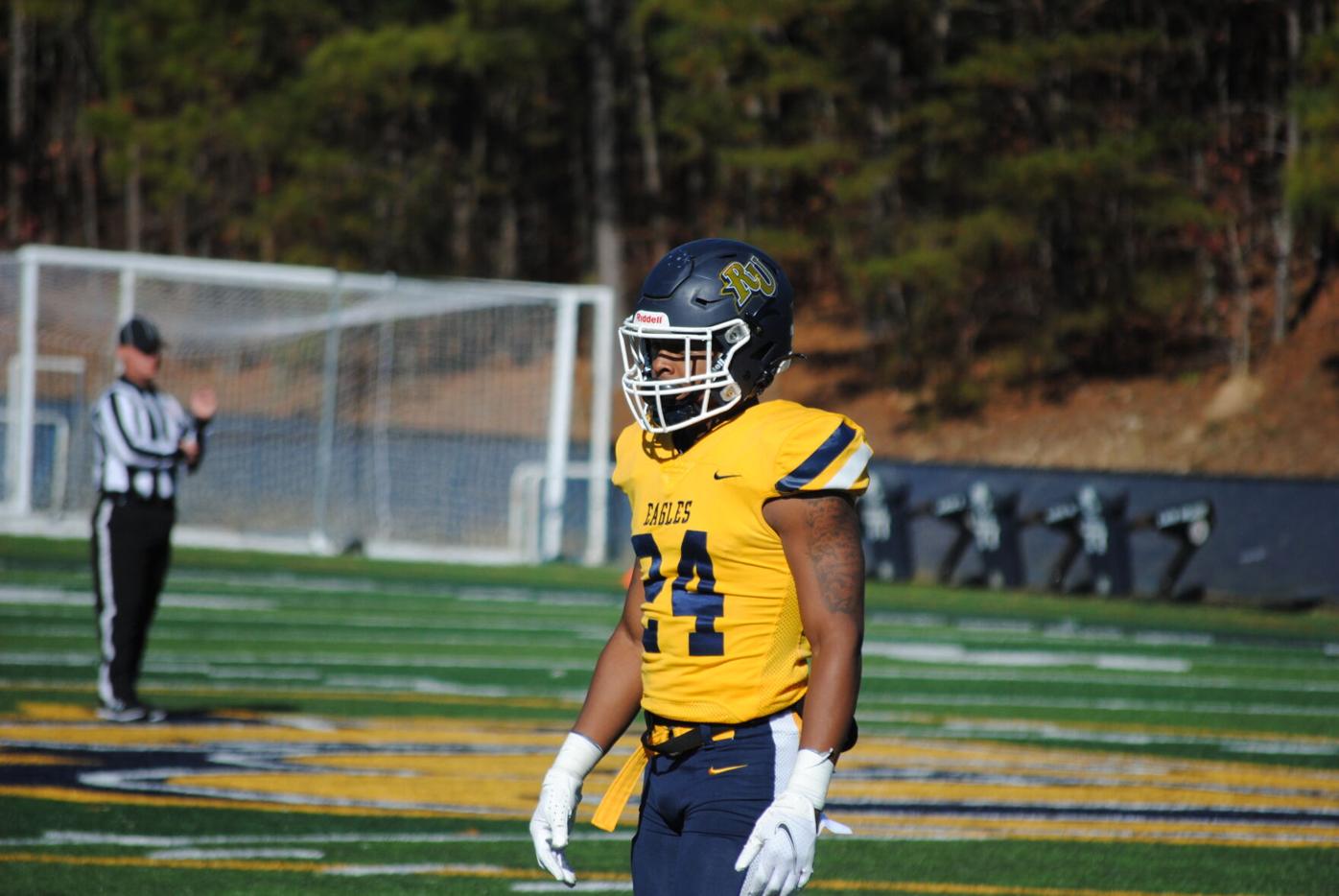 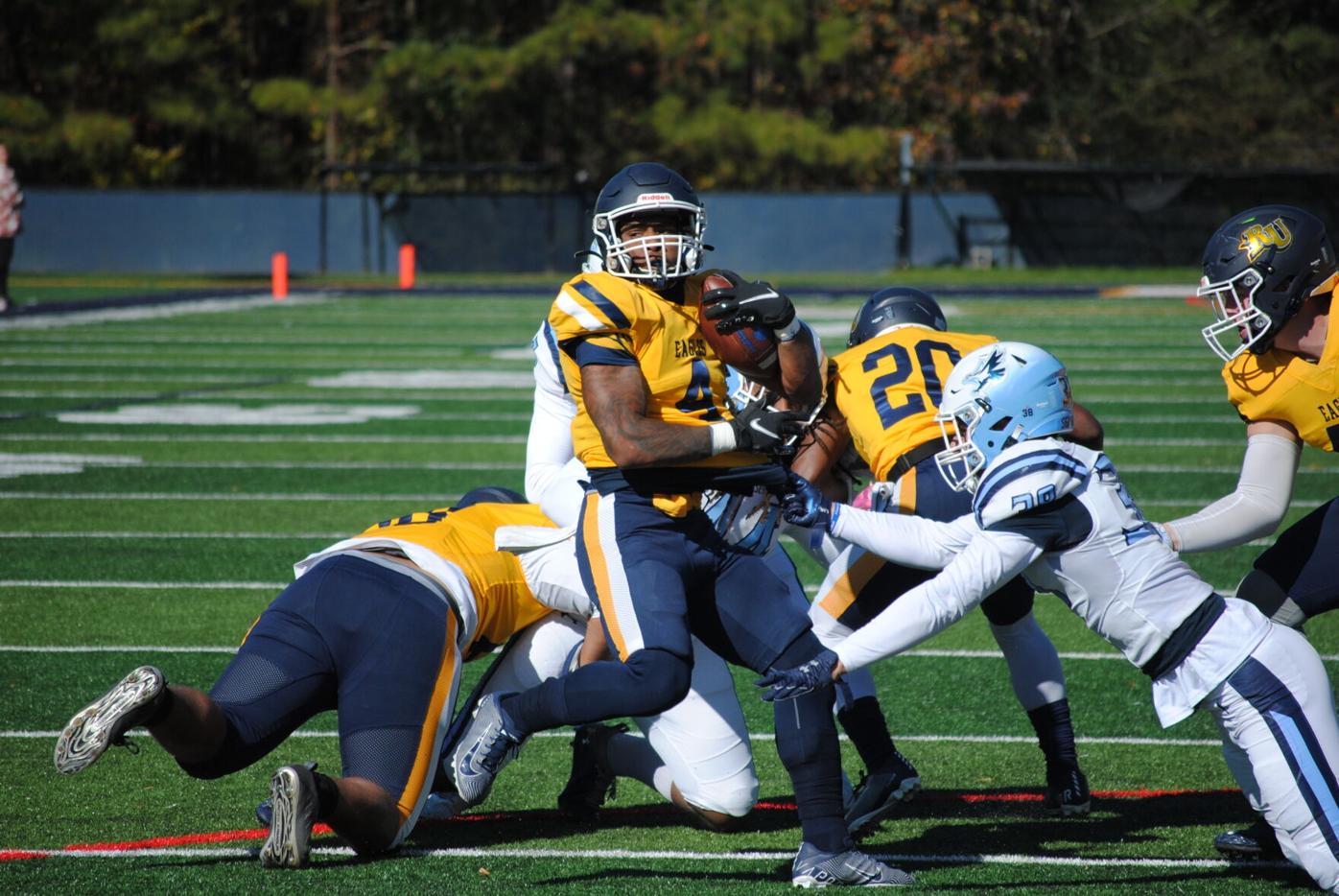 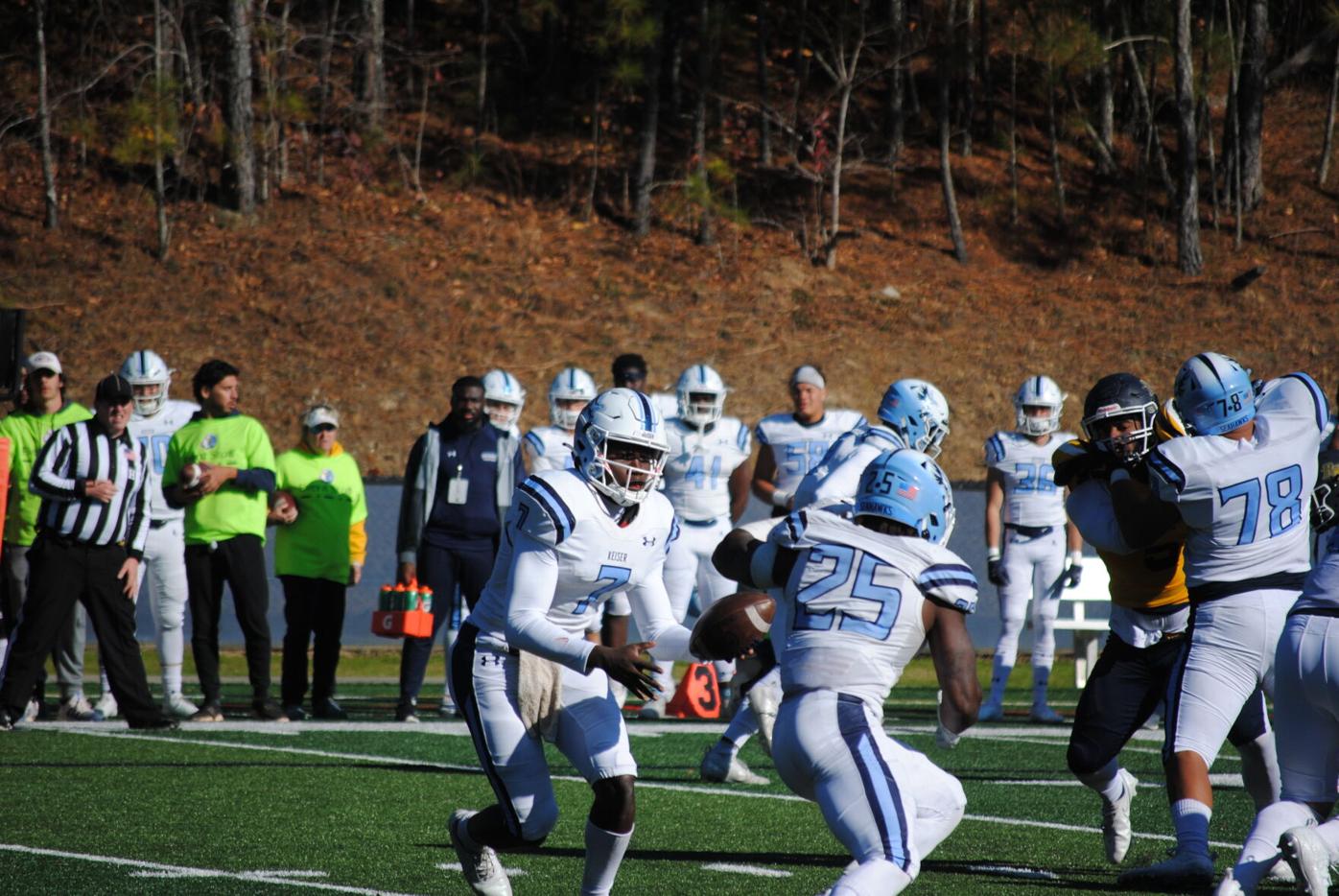 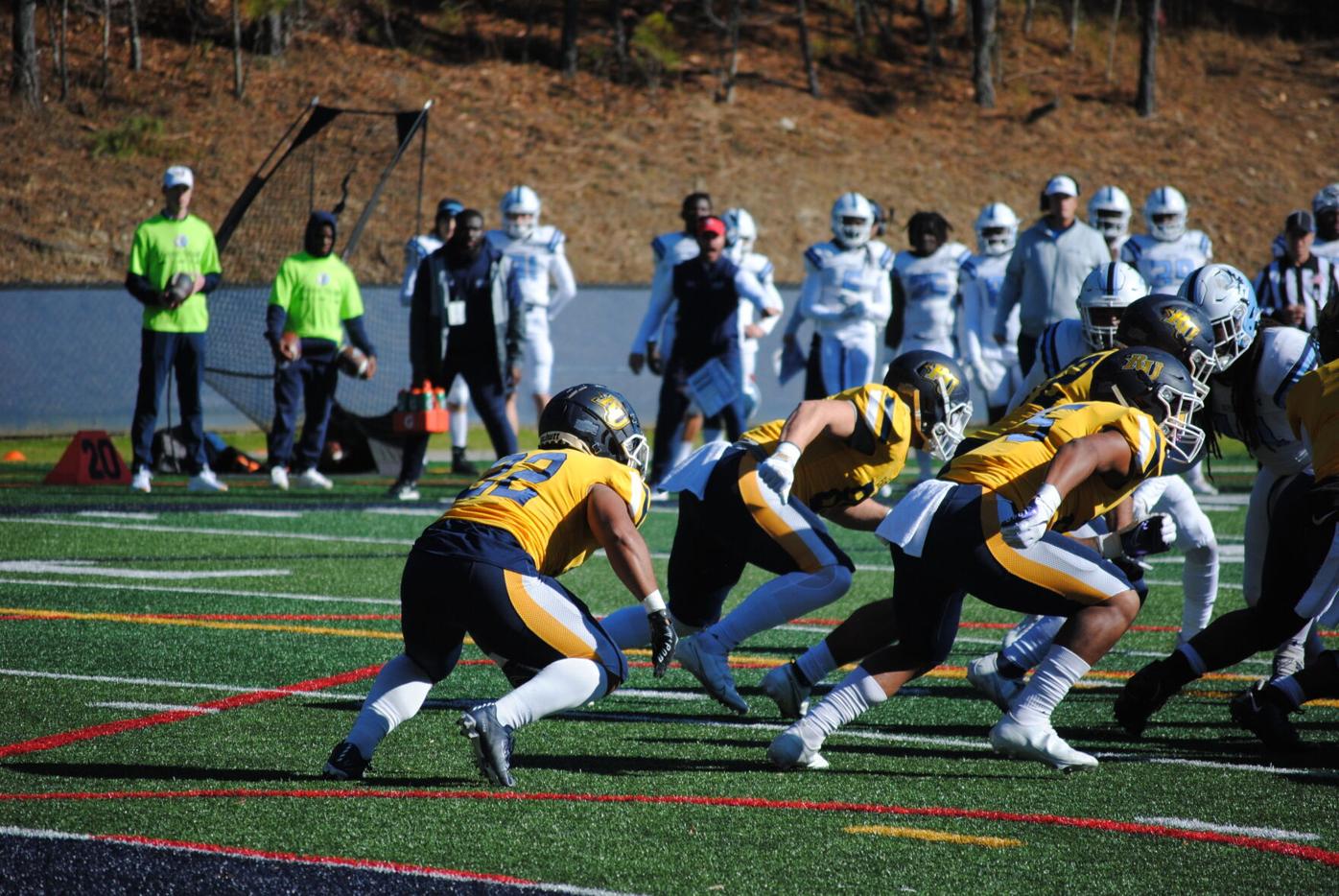 Above: Reinhardt running back Devyn Collins (22) and quarterback Billy Hall look on during Saturday’s game against Keiser in the first round of the NAIA playoffs. The Eagles were unable to stop the Seahawks from scoring late and saw their season come to an end. Below: Reinhardt running back Bryce Burgess makes a push against the Keiser defense.

WALESKA — For the second straight season, Reinhardt saw itself ousted from the NAIA playoffs by Keiser, losing 16-13 on Saturday Ken White Field.

During the spring season, the Eagles fell 42-14 to the Seahawks in the second round.

Both teams played excellent defense Saturday, but in a game that went down to the final minute, Keiser made one more play than Reinhardt.

“It was a defensive battle,” Eagles coach James Miller said. “We made a play at the end, but they came back and answered. That is what good football teams do. We had the ball and were driving, but their guy made a great play and undercut the route.”

With the Eagles looking to answer, quarterback Billy Hall converted a crucial third down with an 18-yard scramble. The next play, however, Hall’s pass was intercepted by Keiser’s Amari Hayes with a little more than 1 minute to go.

Reinhardt got the ball back with 3 seconds remaining in the game, but Hall’s last-ditch pass to Navarie Solomon dropped incomplete to seal the Eagles’ first-round loss.

The Eagles held the Seahawks to three points in the first half and did a nice job keeping Burgess under control. The Keiser offense, however, was better in the second half, with Burgess converting many important plays. He finished the game with 155 yards and a touchdown on 37 carries.

“It can get tough,” Miller said. “I really thought we did a good job and held our own. I thought we battled. In that last drive, he just chunked us a couple of times, and we just could not slow him down.”

Keiser outrushed Reinhardt 222-150, though the Eagles did have some solid contributors in the run game. Hall led the team with 54 yards on 14 carries, followed by Isaiah Blake’s 50 yards and two touchdowns on 17 carries.

Reinhardt’s leading rusher, Devyn Collins, had 47 yards on 13 attempts. Dylan Kelly added 14 yards on the ground, though he led the Eagles’ passing attack with three catches for 46 yards.

Though Reinhardt held Keiser to only 36 passing yards, one of the most telling numbers from the game was the Seahawks outpacing the Eagles 4.4 to 2.9 in yards per rush.

Despite the loss, Miller praised his team for its success this season, amid one of the most challenging years of the head coach’s career. Miller said the Eagles’ effort was excellent all game long.

“I am super proud,” he said. “They fought their tails off today. We took the lead and thought we were going to pull it out there at the end. We just did not have enough in the tank, but they never gave up. That is what this program’s culture is built on.”