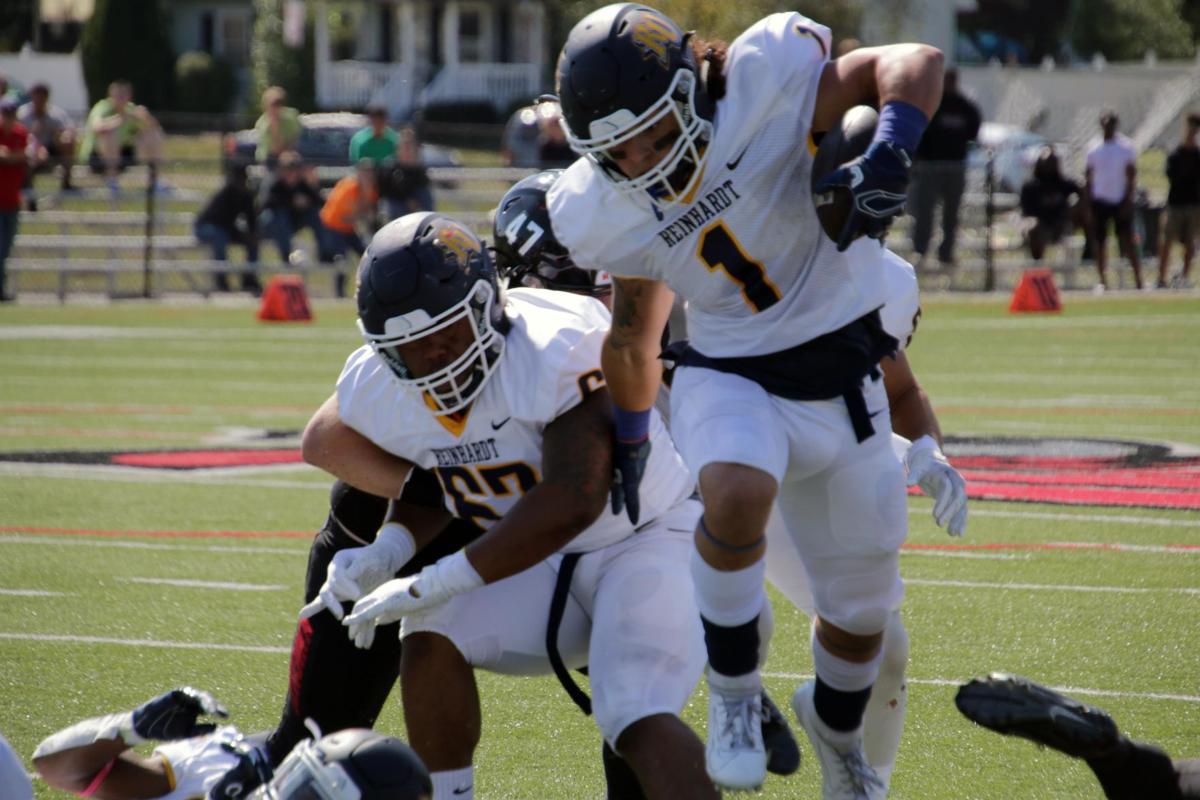 Reinhardt sophomore Bryce Burgess (1) hurdles a defender during the Eagles’ 71-20 victory over Kentucky Christian University on Saturday in Grayson, Kentucky. 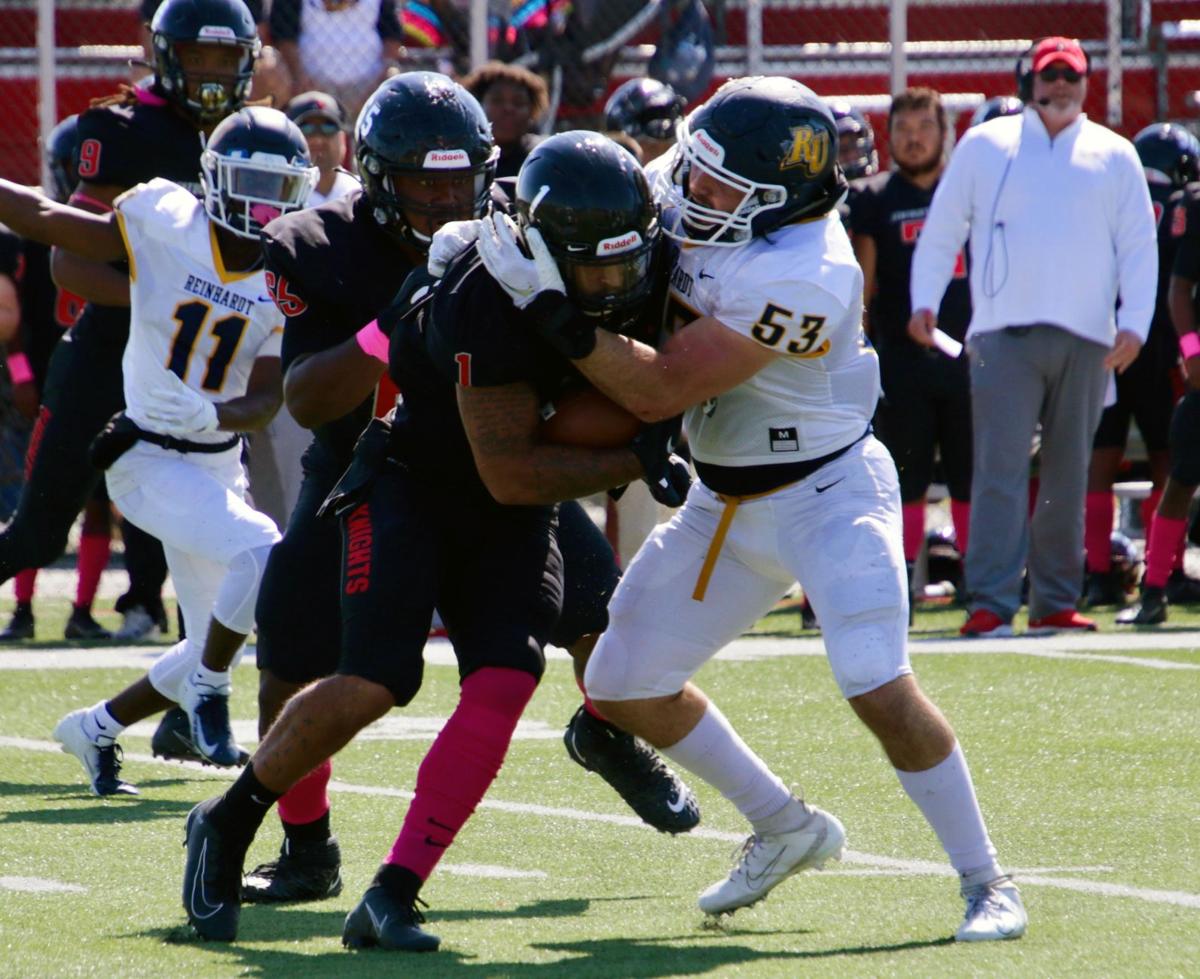 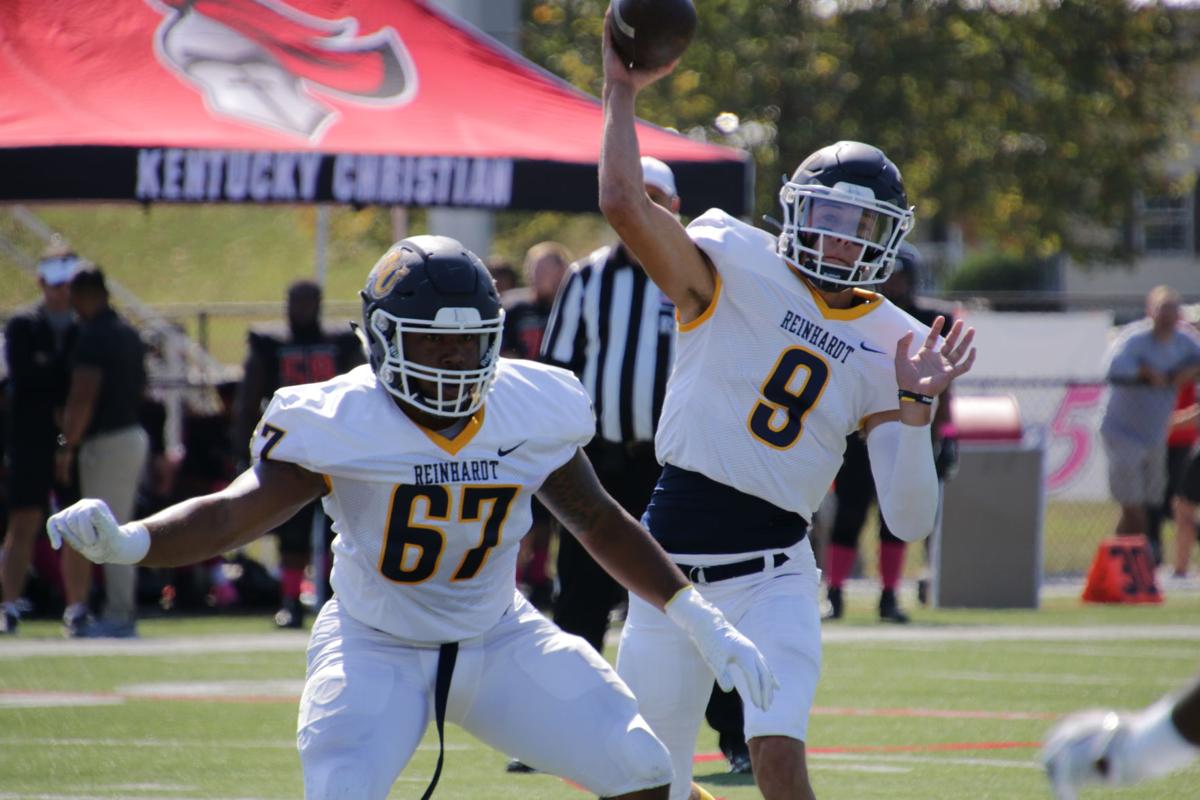 Reinhardt junior quarterback Billy Hall (9) finished 5-for-9 passing for 130 yards with two touchdowns in the Eagles’ 71-20 victory over Kentucky Christian on Saturday in Grayson, Kentucky. 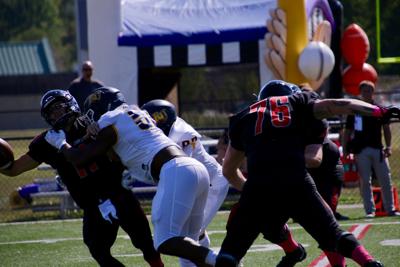 Reinhardt sophomore Bryce Burgess (1) hurdles a defender during the Eagles’ 71-20 victory over Kentucky Christian University on Saturday in Grayson, Kentucky.

Reinhardt junior quarterback Billy Hall (9) finished 5-for-9 passing for 130 yards with two touchdowns in the Eagles’ 71-20 victory over Kentucky Christian on Saturday in Grayson, Kentucky.

Reinhardt head coach James Miller said late last week he felt his team was on the verge of breaking through.

It turns out he was right.

Reinhardt (4-2, 1-0) defeated Kentucky Christian (2-4, 0-1) 71-20 on Saturday afternoon in Grayson, Kentucky in the team’s Mid-South conference opener. After averaging 16.6 points per game through the first five games of the season, the Eagles’ 71-point offensive output was most points scored since the 2016 season and the fourth-highest single game point total in program history.

“We finally played close to a whole game,” Miller said. “Our guys had some fun out there. You could tell they were enjoying it.”

The opening play of the game may have been indicative of what kind of day the Eagles were about to enjoy. Senior running back Montralius Mosely hauled in a 75-yard touchdown pass from junior quarterback Billy Hall on a play action pass on the first play of the game as Reinhardt went on to build a 40-14 halftime lead. Mosely finished with 31 yards rushing, 78 yards receiving and scored touchdowns both on the ground and in the passing game. Hall finished 5-for-9 passing for 130 yards, his highest passing yardage of the season, with two touchdowns and zero interceptions.

Miller said last week he felt big plays in the passing game would help open up more of the running game and Saturday saw the Eagles execute throwing the ball. Freshman Navarie Solomon caught three passes for 93 yards including a seven-yard touchdown reception in the second quarter and showed why Miller spoke highly of the talented young receiver in the preseason.

“Navarie (Solomon) definitely made some plays,” Miller said. “He went up and caught the ball, something we haven’t seen around here in a long time. That game should give him and Billy (Hall) some confidence that they can make some plays. He’s gotta try to build off this game.”

The Eagles running game went to work following the early passing stikes. Reinhardt totalled 331 yards on the ground on 54 carries with 12 different players recordeding a rushing attempt. M’Callun Lanier led the team with 65 yards on the ground while Mosely, Bryce Burgess, Trevae Cain and Isaiah Blake each scored touchdowns.

Kentucky Chrisitan entered the game averaging 38.2 points per game and nearly 500 yards of total offense per contest. Reinhardt held Kentucky Christian to a total of 359 yards, 135 yards under its season average, and forced six turnovers in the process. Malik Ransom led the team with 12 total tackles while Bryce Ford and Jon Perry each finished with a team-high 1.5 tackles for loss.

The Eagles recorded five sacks and three interceptions with redshirt freshman Kellen Neal finishing with two of the three picks.

“We constantly put pressure on their quarterback and I thought we made him uncomfortable,” Miller said. “Kellen (Neal) could have had three interceptions if played one a little better. We have had some injuries on defense, and that’s no excuse, but we’re pretty deep on that side of the ball and they’re playing good right now.”

Miller told his staff early on Monday morning that both the staff and players need to build off the momentum created on Saturday. Reinhardt scored touchdowns on offense, defense and special teams against Kentucky Christian and finally made the explosive plays the Eagles’ fans have become accustomed to seeing over the past few seasons.

“We finally made some big plays on Saturday and we’ll hopefully get a few guys back from injury this week,” Miller said. “We’ve gotta build off this and continue to get better because we still have some young guys who don’t fully understand how to finish and how to play the game from an effort standpoint.”

Reinhardt will host Bluefield College (1-4, 1-0) at 6 p.m. on Saturday at Ken White Field at University Stadium in Waleska.