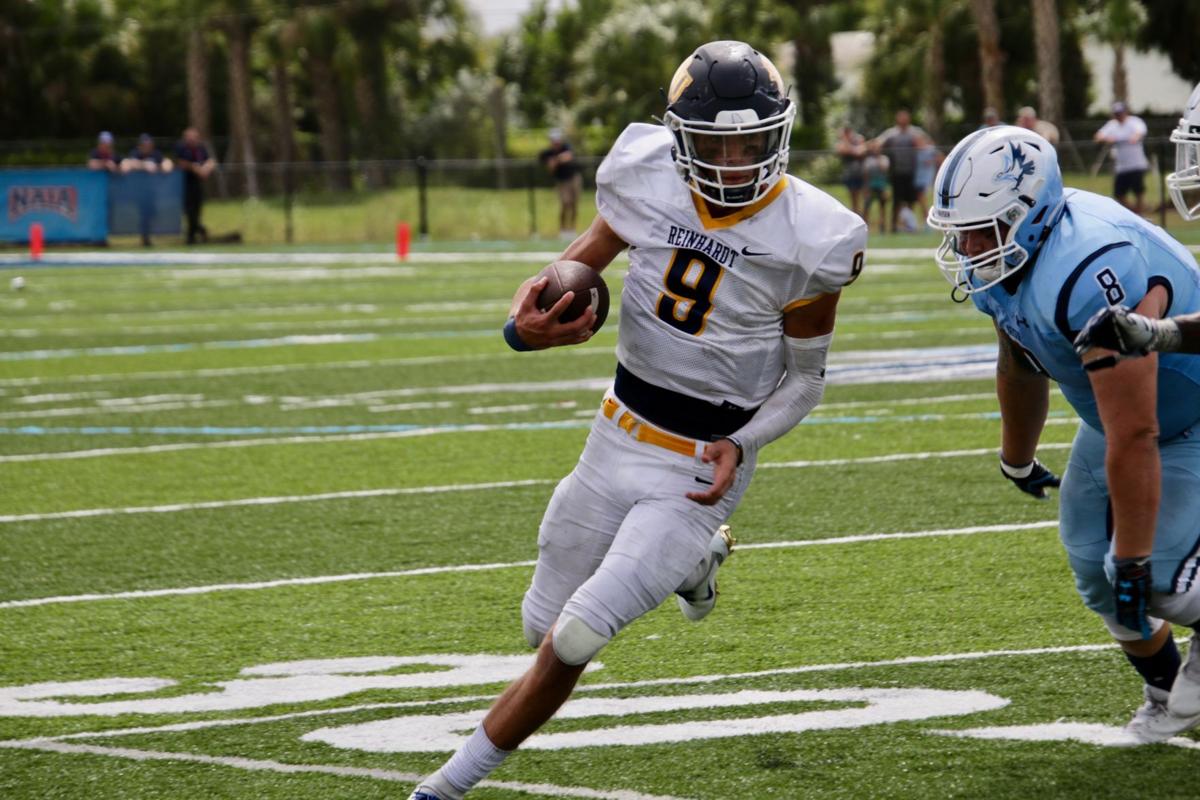 Reinhardt quarterback Billy Hall runs around the right side of the line on Saturday against Keiser University. Hall leads the Eagles with 348 rushing yards and five rushing touchdowns this season. 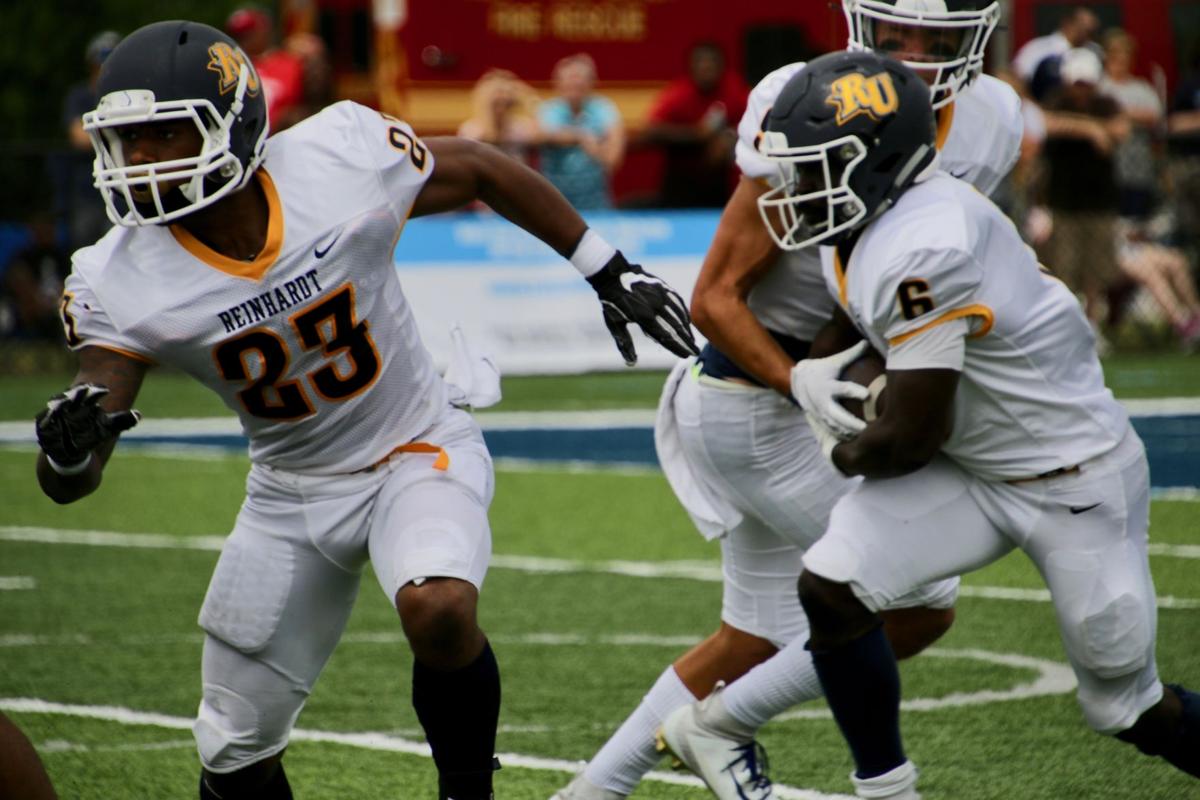 Reinhardt running back Isaiah Blake, No. 23, looks for a defender to block as teammate Montralius Mosely, No. 6, takes a handoff in Saturday’s game against Keiser University in West Palm Beach, Florida.

Reinhardt quarterback Billy Hall runs around the right side of the line on Saturday against Keiser University. Hall leads the Eagles with 348 rushing yards and five rushing touchdowns this season.

Reinhardt running back Isaiah Blake, No. 23, looks for a defender to block as teammate Montralius Mosely, No. 6, takes a handoff in Saturday’s game against Keiser University in West Palm Beach, Florida.

Reinhardt lost to Keiser University in the last minute of Saturday’s game, but may have lost even more in the process.

Keiser drove 98 yards with less than two minutes remaining and scored with less than thirty seconds left to play to defeat Reinhardt 14-12 in West Palm Beach, Florida on Saturday afternoon. Reinhardt managed to advance the ball to midfield and attempt a last-second Hail Mary to win the game but the effort came up short as the Eagles lost their first game of the season.

“It was a tough loss. A really tough loss,” Reinhardt head coach James Miller said. “Right now we just can’t make those little mistakes because we’re pretty banged up with injuries. We just can’t afford to do that.”

Already playing without several defensive starters including Teon Burroughs, J.T. Graydon and Dawson Mitchell, Reinhardt (3-1) lost several more players to injury against Keiser. According to Miller, starting center Josh Chastain and starting right guard Jonathan Novicki suffered apparent season-ending knee injuries and several other starters along the offensive line were not playing due to injury by the of the game.

“We were without five of our top seven guys on the offensive line by the end of the game,” Miller said. “Josh (Chastain) and Jon (Novicki) will see the doctor today but it didn’t look good. I’ve never been apart of something like this as far as injuries, but there’s no excuses because we still left plays out on the field and that game still could have gone either way.”

Playing in what Miller described as hot and extremely windy conditions, Keiser (2-0) took a 7-0 lead in the first quarter after Marquess Burgess ran 35 yards for a score. The score remained the same through halftime until Reinhardt quarterback Billy Hall got the Eagles on the board with a 12-yard touchdown run midway through the third quarter.

Hall scored again with a little more than six minutes remaining in the fourth quarter, this time on a 15-yard run. After missing the extra point following Hall’s first score, the Eagles attempted a two-point conversion in the fourth quarter but were unsuccessful and led 12-7 before Kesier’s final drive.

“Billy (Hall) is playing his tail off right now,” Miller said. “He can still improve on his passing and decision making, but he’s played like a warrior all season for us.”

The Eagles’ defense continued to play well despite injuries. Sebastian LeGarra led the team with 11 total tackles while Brandon Ballard and Jon Perry each recorded a sack apiece. Reinhardt’s defense is surrendering 9.2 points per game this season and Miller said it’s up to the offense to perform better.

“Our defense has played lights out,” Miller said. “ You hold what I think is a good offense like Keiser to 14 points, you should win the game. We’re just not executing on offense right now.”

The road will get no easier for Reinhardt who will play at Kennesaw State at 6 p.m. on Saturday. Kennesaw State moved up to No. 4 in this week’s Football Championship Subdivision Coaches Poll and Miller said his players should be excited to play a game which will air on ESPN+ against what he described as one of the best teams in the country.

“Our guys will definitely be excited and it will be a good opportunity for them,” Miller said. “We’re going through some major adversity right now and I think we have six starters out with season ending injuries. But I’ll tell the guys this week, nobody gives a crap.

“Everyone has to raise their level of play. We have to start creating our own luck and you do that by practicing better and playing better. I told the guys I just wanna focus on being better than we were last week. Find ways to improve. That’s what we’ll do.”