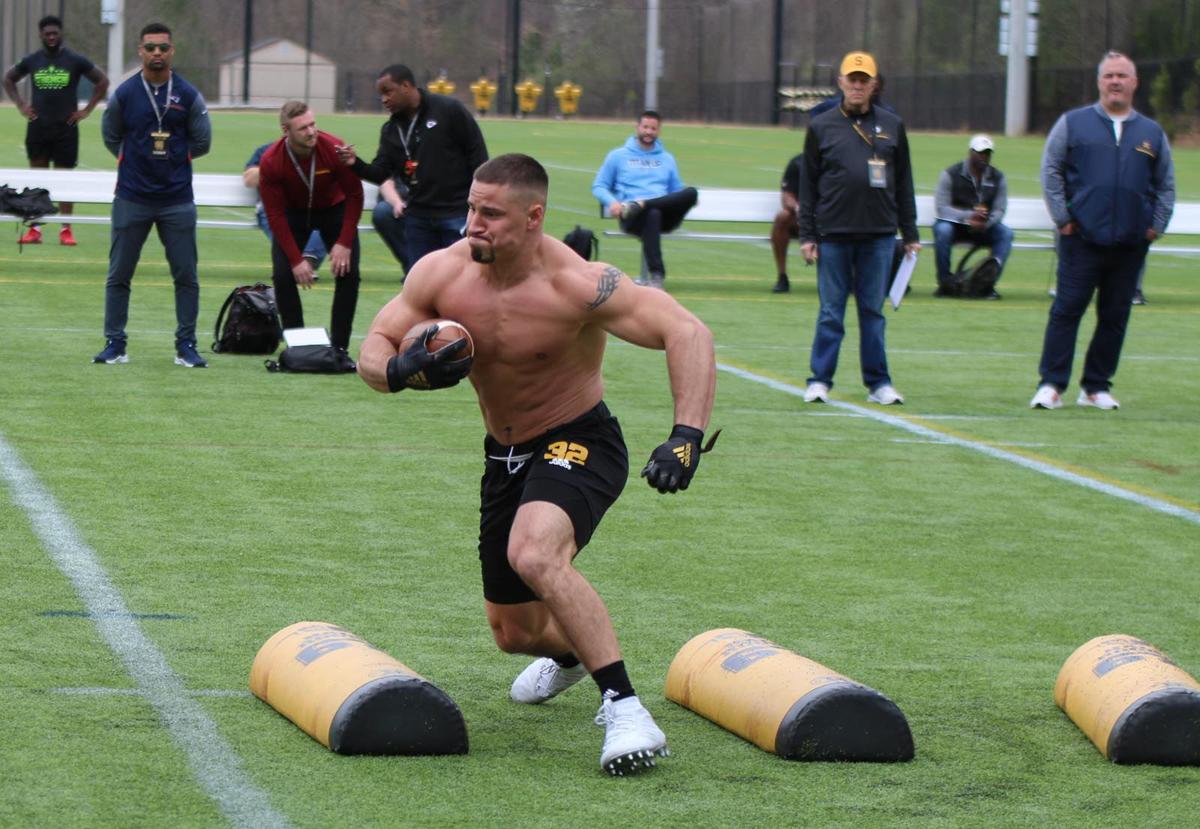 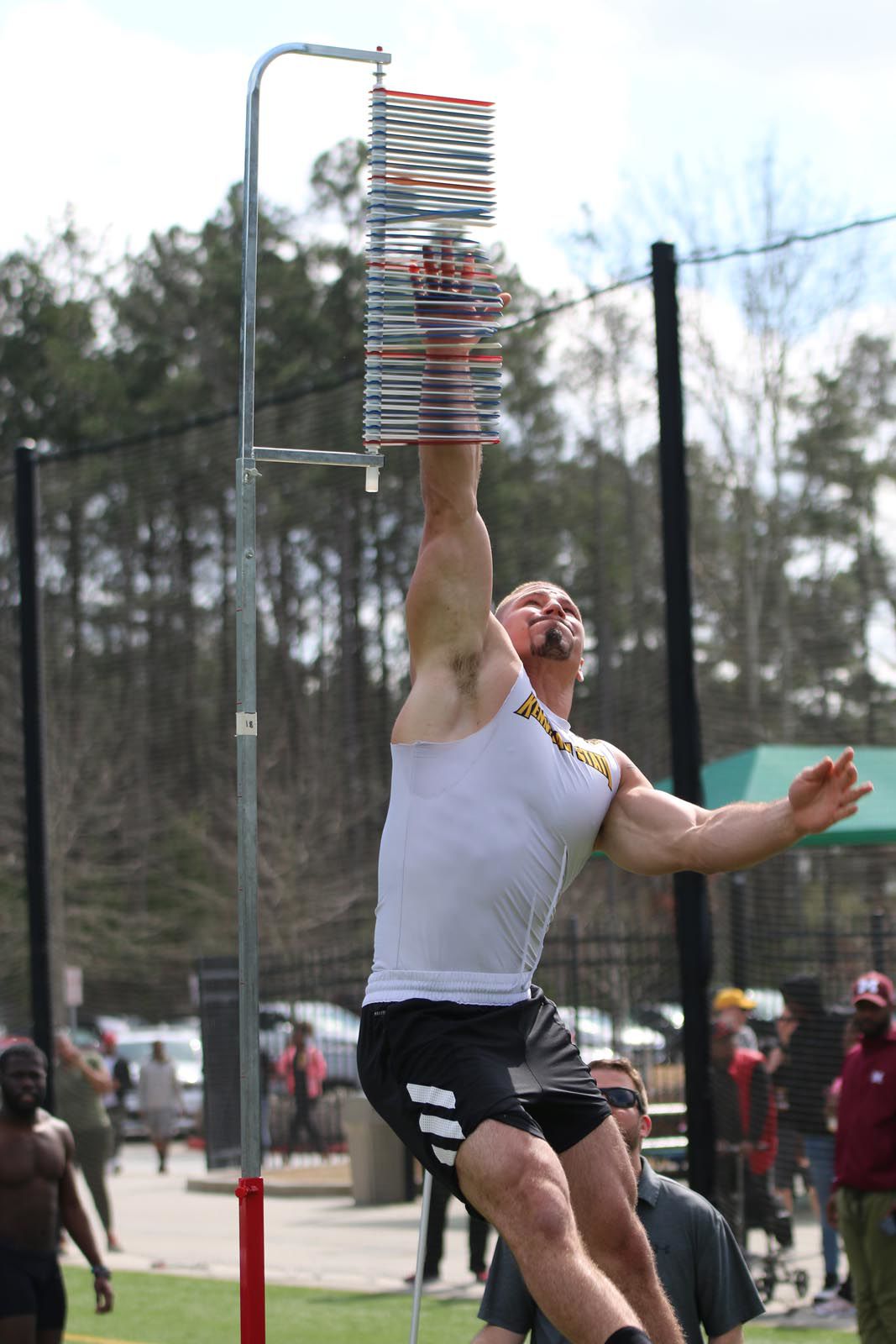 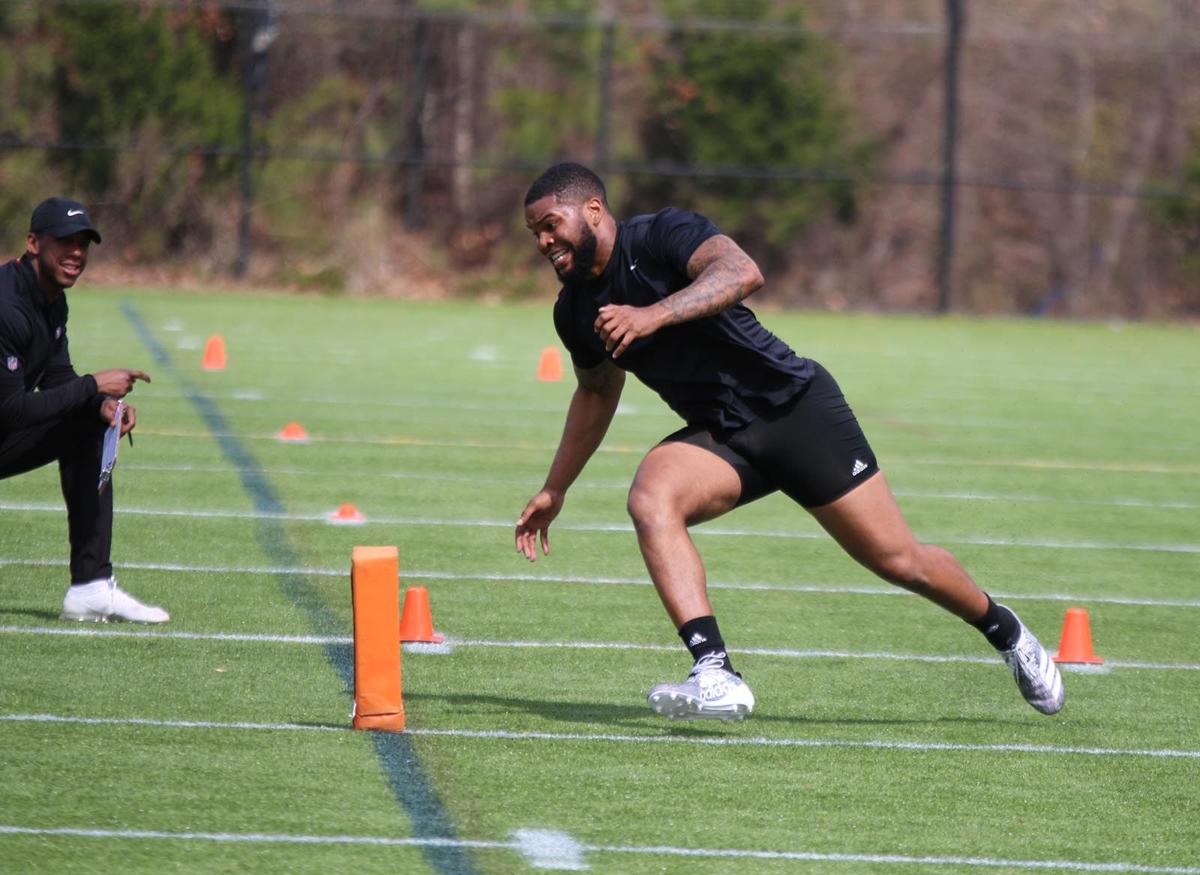 Desmond Johnson Jr. cuts around a pylon during a drill at Kennesaw State's Pro Day on Wednesday, March 11, 2020. 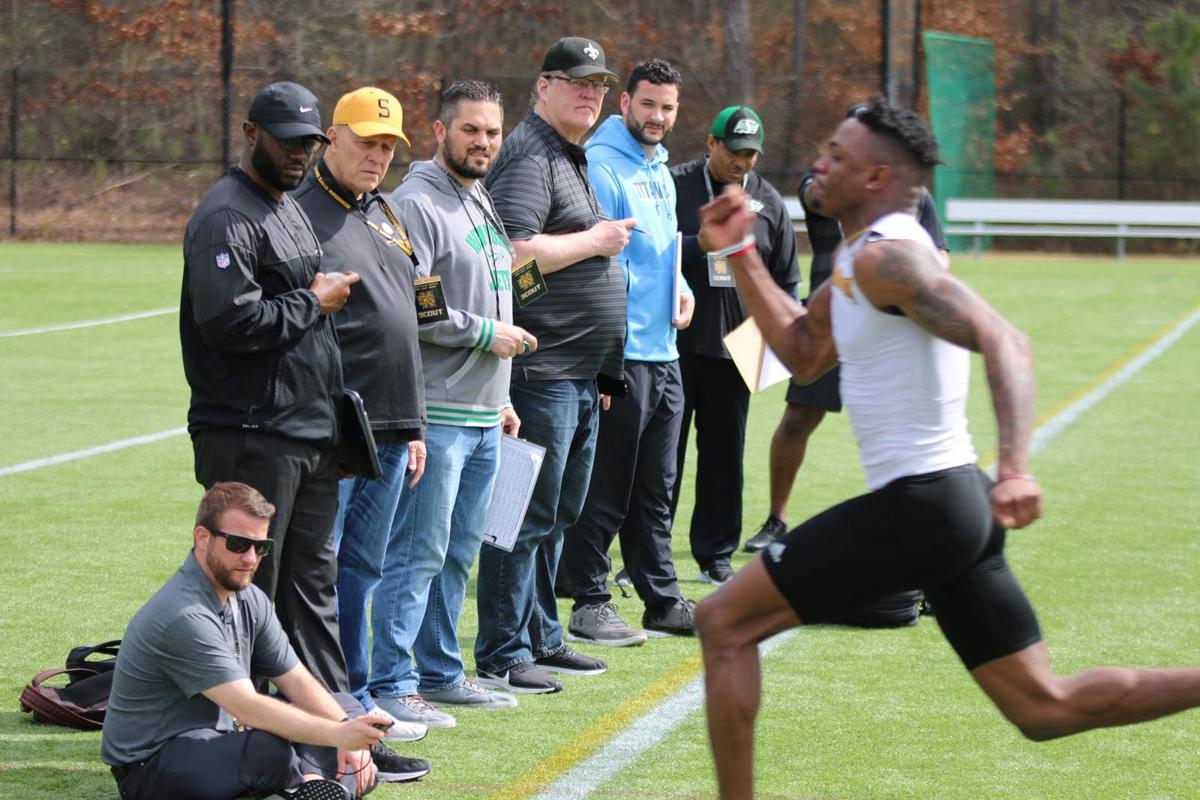 Desmond Johnson Jr. cuts around a pylon during a drill at Kennesaw State's Pro Day on Wednesday, March 11, 2020.

KENNESAW — Bronson Rechsteiner may have opened some eyes of the scouts in attendance during Kennesaw State’s pro day Wednesday.

The running back, who measured in at 5-foot-10 and 223 pounds, turned in numbers that would have measured up against the elite athletes at last month’s NFL scouting combine in Indianapolis.

Following his workout, a collection of the scouts representing 20 NFL teams and two from the Canadian Football League, surrounded the former Etowah High School to talk to him.

“I was really focused on speed,” Rechsteiner said. “I’m kind of known for my strength, so it was a change of direction. I wanted to step away from strength.

Rechsteiner, who would likely be considered more of a fullback or H-back mold in the NFL, ran a 4.48-second 40-yard dash outside and into the breeze. His time was better than that of many of the running backs at the combine, including LSU’s Clyde Edwards-Helaire (4.6) and Utah’s Zack Moss (4.65), and it equaled Georgia’s D’Andre Swift.

While Rechsteiner may have tried to step away from strength, he certainly didn’t lose any of it, bench-pressing 225 pounds 35 times. The mark was six reps better than any running back at the combine, and it would have been third among all athletes who were invited to Indianapolis.

Of all the players who lifted at the combine, only eight reached more than 30 reps. All were either offensive or defensive linemen.

“Yeah, that’s right where we expected (my bench-press reps) to be,” Rechsteiner said.

During his senior season at Kennesaw State, Rechsteiner ran for 909 yards and seven touchdowns. He also set a single-game rushing mark with 221 yards on only 10 carries against Missouri State, including a program-best 85-yard touchdown run.

To help prepare for his pro day, Rechsteiner said he worked out with many other draft-eligible athletes, including former Oklahoma and Alabama quarterback Jalen Hurts and players from Clemson.

Rechsteiner said he has had conversations with the Indianapolis Colts and Dallas Cowboys, and he had an interview scheduled with the Jacksonville Jaguars. He was also seen Wednesday having conversations with scouts from the Atlanta Falcons, New Orleans Saints and Washington Redskins.

The NFL draft is scheduled for April 23-25 in Las Vegas, with rookie mini-camps to take place in early May.

No Kennesaw State player has been drafted or played in the NFL. Former Owls wide receiver Justin Sumpter and linebacker Anthony Gore are playing in the CFL, while former running back Darnell Holland is on a reserve squad of players who are ready in case of injuries in the XFL.

Rechsteiner hopes to be the first to hear his name called in the NFL.

“The NFL is the top-tier,” he said. “I’m honored to just get an opportunity. I don’t care if its fullback, tailback or special teams.”

The 6-foot, 229-pound Johnson will make the transition to outside linebacker and edge rusher at the next level. The four-time first-team all-Big South Conference selection finished his senior season with 17.5 tackles for loss and seven sacks.

“I feel good,” said Johnson, who ran a 4.95 40. “I’ve been working on making the transition (to outside linebacker). I’m working on my drops (into pass coverage).”

Johnson said he was invited to the Falcons’ pro day after his workout and had been contacted by some teams in the CFL.

“I’m just going to continue to train harder,” he said. “I’m working for more opportunities to get myself in front of people.”

In all, 28 players from 13 different schools participated in Kennesaw State’s pro day.

Reinhardt sent two prospects — defensive back Aaron Brown and offensive lineman Tre’Monte Coney. Brown ran a 4.65 40, while the 304-pound Coney came in at 5.19.