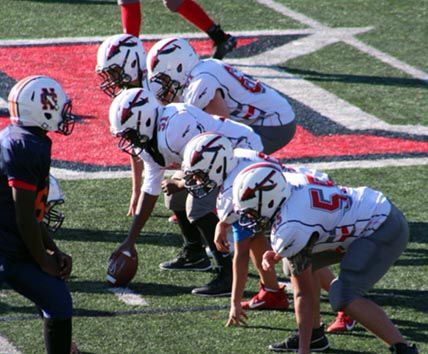 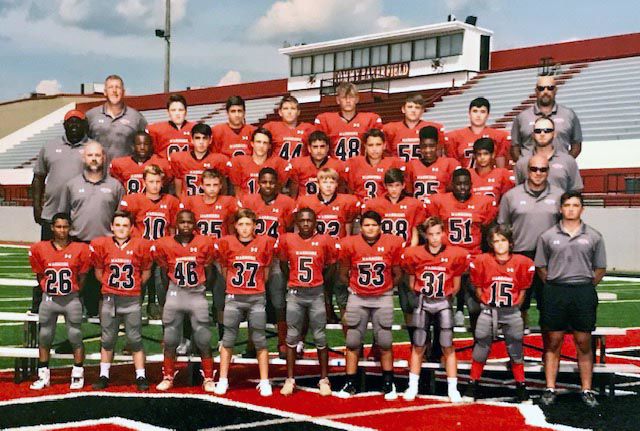 With football season over in Cherokee County, the future looks bright for the Cherokee Warriors.

This fall, with a number of underclassmen serving as key contributors, the Warriors finished 8-4 and advanced to the second round of the state playoffs for the sixth time in program history. Not far behind them is another group of players eager to make a name for themselves.

The Cherokee Junior Warrior 7th grade team defeated North Cobb 14-12 in the Georgia Middle School Athletic Association 7A championship on Nov. 16 at Milton High School. The victory was the first middle school state championship in Junior Warrior football history, but according to head coach Andy Walsh it was nothing new for this group of players.

“It’s just a special group of boys,” Walsh said. “They know how to win and for them, winning has become a habit.”

Going back to their days in the Cherokee Youth Football Association, the core of this team has competed for and won championships on a regular basis. The team finished its regular season with a record of 6-2 before knocking off McEachern, North Forsyth and North Cobb in the playoffs to claim the 7A 7th grade championship.

North Cobb knocked Cherokee out of the 6th grade playoffs last year, a fact which wasn’t lost heading into this year’s championship game.

“We came together toward the back half of the year,” Walsh said. “North Cobb is a really well coached team but we had revenge on our minds.”

Cherokee trailed 6-0 at halftime and 12-6 with under two minutes left to play, before a surprising play call turned the game. Quarterback Tanner Savasir connected with wide receiver Gracen Sexton on a curl route and once the North Cobb defenders closed in on him, Sexton pitched the ball to Sean Follmer who sprinted and scored the game-tying touchdown. It was a perfectly executed hook-and-ladder play, one the team hadn’t used once all season.

“We noticed the defense was playing off of Gracen (Sexton) so we called a timeout,” Walsh said. “My offensive coordinator called a hook-and-ladder and Sean Follmer caught the pitch and scored. We practiced that play for an obnoxious 10 minutes during Thursday’s practice before that game. It was perfect, because we knew North Cobb was such a good tackling team.”

Christian Irwin ran the ball in one play later to convert the 2-point conversion and give Cherokee the lead. Cherokee’s defense secured the victory and was on the field as the final seconds ticked off the clock in Milton.

Walsh said his players weren’t surprised by their accomplishment. Many of them are multi-sport athletes and after the victory they were on to basketball season at Freedom or Teasley Middle Schools. The championship was the first for Cherokee’s junior program, but according to Walsh the expectations are to compete for another championship next year.

Cherokee’s varsity head coach Josh Shaw was on the sideline for the victory, along with several varsity football players. Walsh said the support from the varsity program goes a long way to helping build the confidence of the players in the junior program.

In the 64 seasons of Cherokee High School football the Warriors have a 39.7 winning percentage. Never has the program advanced past the quarterfinals of the state playoffs but with the current group of players, and those waiting in the wings, hopes are high within the Cherokee circles.

“It’s just a huge Cherokee family and that comes down from the top,” Walsh said. “The coaches for the varsity team will be with us during the spring to get the new guys acclimated to how things are done and the fundamentals. It’s very hands on just because they have a love for the game and they want the program to be successful.

“There’s definitely an electric buzz around the program right now. We’re trying to change the way things have gone in the past.”