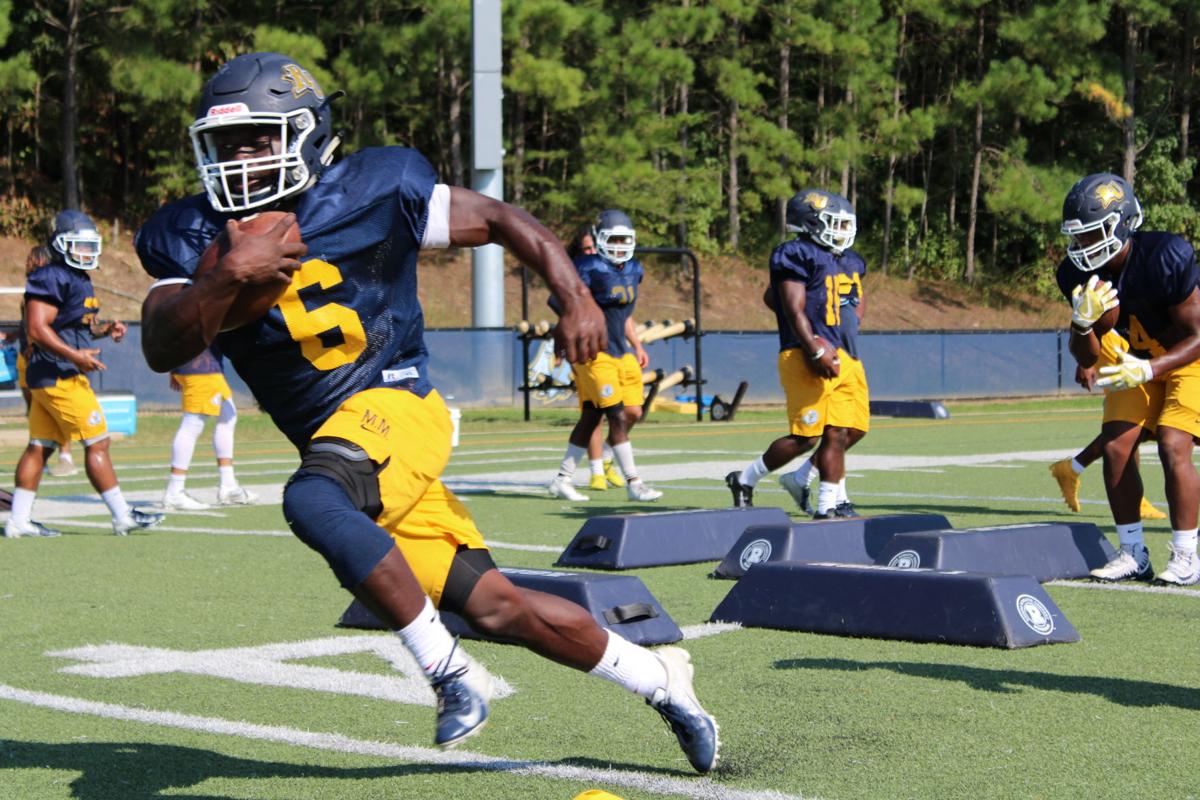 Reinhardt University running back Montralius Mosely runs through drills on Wednesday afternoon in preparation for the Eagles' second game of the season this Saturday at home against the University of Pikeville. 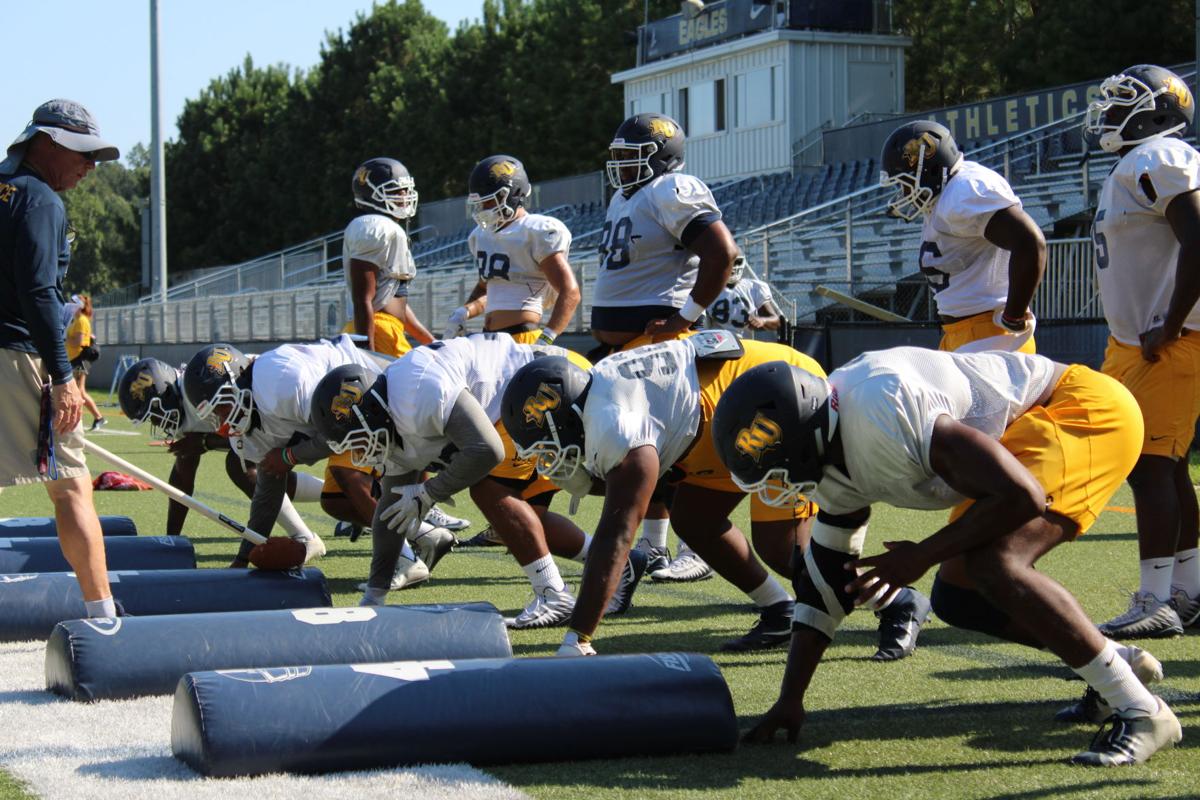 Members of the Reinhardt University defensive line work on their first step off the ball during Wednesday's practice in Waleska. 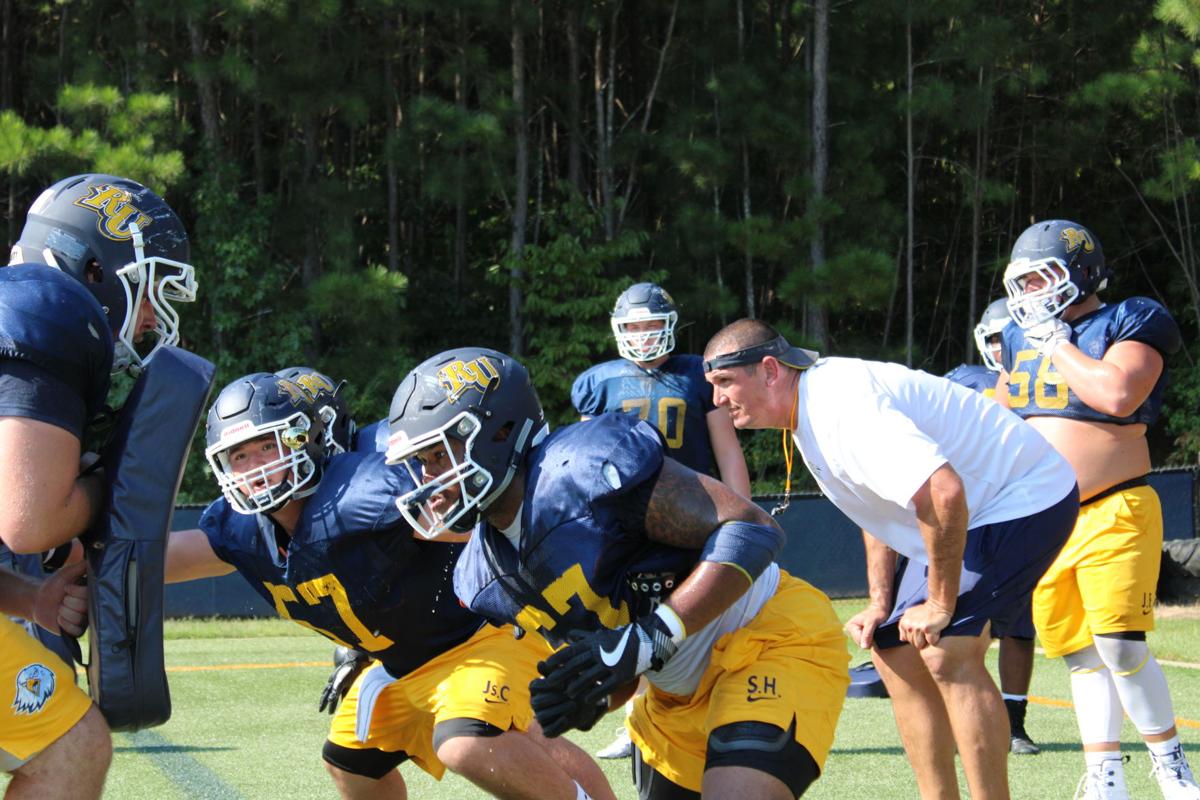 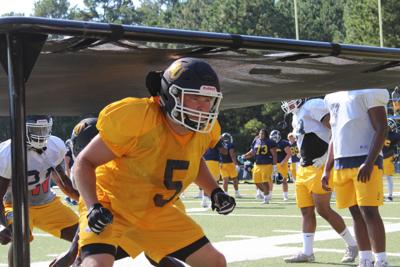 Reinhardt University running back Montralius Mosely runs through drills on Wednesday afternoon in preparation for the Eagles' second game of the season this Saturday at home against the University of Pikeville.

Members of the Reinhardt University defensive line work on their first step off the ball during Wednesday's practice in Waleska.

WALESKA -- The third year of the James Miller era of Reinhardt football began with a win, a result Eagles’ fans have become accustomed to since Miller took over before the 2017 season.

Now, following an early bye week, the No. 10 Eagles will begin the meat of their 2019 schedule, beginning Saturday's home game against Pikeville.

“That first game was a lot of our guys' first time playing a full game at this level.” Miller said. “I think there was probably some first-game jitters, but we have to be better in certain areas. We watched the film last Monday and made some corrections based on that before we started prepping for Pikeville.”

Reinhardt defeated Webber International 16-6 in its season opener Aug. 24, and for a team that prides itself on scoring points, it was the defense that could not have started the season much better.

The Eagles held the Warriors to 4 rushing yards and 160 total. All-American defensive end J.T. Graydon led the way with five tackles and two sacks, while fellow defensive end Matthew Prather was close behind with four tackles and one sack. Sidney Hamm recorded Reinhardt’s first interception of the season, and Bryce Burgess recovered a muffed punt as well.

Webber’s primary playmakers were sophomores, but Reinhardt on Saturday will face a Pikeville team with numerous experienced players.

“They’re a very veteran team,” Miller said. “It might be the most veteran team (coach Allan Holland Jr.) has had there. Offensively, they return a lot up front. Their quarterback, running back and wide receivers are all back.”

Senior quarterback Bowen Smith finished 15-for-29 passing for 186 yards and one touchdown last week in a 59-20 loss to NCAA Division I opponent Murray State. The Bears' defense struggled to slow down the Racers' offense, but Pikeville did manage to finish with 245 yards of total offense.

Xondre Smith finished with 68 yards on 15 carries and receiver Alexander Shelton led the team with eight receptions for 87 yards. Arites Clark, at 6-foot-6, is also a dangerous offensive weapon for Pikeville.

“I think our secondary is in for a big test this week,” Miller said. “I think it’ll be a challenge for our guys.”

Miller said Pikeville also brought back nearly its entire defense from last season, and one of the key pieces will be safety Taeron Brown. He missed time last season due to injury, but he racked up 18 tackles in 2017, when Reinhardt beat Pikeville 44-21.

“He’s one of the best players in the conference,” Miller said. “He does it all. I mean, he’s a really good player.”

Adjustments along the offensive line allowed Reinhardt to open up the running game and scoring in the victory over Webber International. The Eagles finished with 275 yards on 54 carries, with 11 different players recording at least one carry. Montralius Mosely led the team with 70 carries on 12 attempts.

Miller said he hopes the adjustments made in the second half against Webber will translate to Pikeville.

“We’ve got to do a better job up front on offense,” Miller said. “It was just one guy here and one guy there and, hopefully, we can get those new guys to stop thinking as much and start reacting. Defensively, they’re going to throw every front you can imagine at you. They’re going to move and they're going to blitz. We have to be ready for that.”

Miller said the Eagles will not make any major adjustments on defense, but the team will welcome the return of senior linebacker Dawson Mitchell. Mitchell, who sat out against Webber due to a minor injury, finished sixth on the team in tackles in 2018.

If the kicking game becomes the determining factor, Reinhardt will need to perform better than it did against Webber, when redshirt freshman Alex Hardy finished 1-for-3 on field goal attempts. Hardy connected on his first attempt from 23 yards out, but missed from 38 and 46 later in the game.

Pikeville kicker Zaniel Phillips connected on both his field goal attempts against Murray State, from 30 and 42 yards.