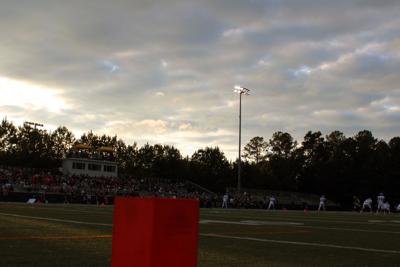 WALESKA - A new found offensive cohesion should bode well for No. 20 Reinhardt as it hits the road this weekend for its final night game of the season.

The Eagles cruised to victory last week with a 45-14 win over Bluefield, the second game in a row where the offense looked like a well-oiled machine. Reinhardt tallied 457 yards and scored five touchdowns from five different players on its first five possessions.

Reinhardt struggled to find consistency on the offensive side through the first few weeks of the season, averaging 17 points in their its five games, but those troubles seemed to have been corrected over the past two games, with point totals of 71 and 45.

“Those first four games, before Kennesaw State, it wasn’t like we were running the ball bad. We were just having to work for each and every yard,” Reinhardt coach James Miller said. “The biggest thing is we’ve started creating big plays over the last couple games.”

Junior quarterback Billy Hall continues to lead the Eagles in rushing with 397 yards and six touchdowns on the season, but Trevae Cain is quickly closing the gap. Cain finished with 75 yards and two touchdowns on seven carries last week, and the junior running back now has 362 yards and three touchdowns. At 225 pounds, Cain’s bruising running style has allowed him to post a 6.5-yard-per-carry average, the highest on the team for players with at least 30 carries.

Cain and Hall are two pieces in a crowded stable of backs who have helped Reinhardt to the NAIA’s No. 7-ranked rushing offense, with 256 yards per game.

“We take a lot of pride in being able to run the ball, but we’re also not scared to pass,” Miller said. “Some of the biggest wins we’ve had here, we’ve thrown it a lot.”

The passing game has opened up for Reinhardt in recent weeks as well.

Hall connected with Devyn Collins for a 56-yard touchdown last week and had another potential touchdown go through a receiver’s hands in the end zone on a long pass. The emergence of the big plays in the passing game, along with a renewed cohesiveness along the offensive line, has helped the Eagles’ offense come alive the past two weeks.

“We got a couple offensive linemen back from injury and were able to put people back at their natural positions,” Miller said. “This week, we’re going to start the same offensive line for consecutive games for the first time all season.”

The Eagles’ defense is allowing 15 points per game, the fourth-best in the Mid-South and the 14th-best in the country. When Reinhardt can get its opponent’s offense to third down, few teams have been better at getting off the field. Reinhardt is sixth in the NAIA with an opposing third-down percentage of 23.3.

Point’s offense will be led by quarterback Micah Maxey, a sophomore who is passing at a 52% rate and who is coming off a season-best 206-yard, one-touchdown performance against Cincinnati Christian.

Reinhardt's pass-rush has been impressive, as the Eagles are No. 7 in the country in total sacks with 22. Reinhardt played more than 10 players along the defensive front last week, which allowed explosive pass-rushers like J.T. Graydon, Seth Fallen and Matthew Prather to enter the game fresh on passing downs. Brandon Ballard leads the team in sacks with four.

“We’ve done a good job of getting after the quarterback this season,” Miller said. “We used to be a 3-3-5 stack defense, but about three years ago, we had an abundance of defensive linemen. We made a switch to a four-man front, and we’ve been blessed to keep stockpiling these guys. I think that’s where you win games, and I’m never going to say no to a talented defensive lineman.”

Defensively, Point is allowing 26 points per game, but it is coming off its best defensive performance of the season in a 35-10 defeat of Cincinnati Christian. Senior defensive lineman Tyler Cross is sixth in the conference in sacks (4.5) and tackles for loss (8.5).

Miller said junior defensive back Isaiah McFarland, who finished last season with a conference-best seven interceptions, is another player the Reinhardt offense is preparing to face.

Point is toward the bottom of the conference in defending the run, allowing 191 yards per game, which should bode well for Reinhardt, though Miller expects anything but an easy game.

“I know we’re going up against a dang good defense,” Miller said. “They out-physicaled us last year. We addressed that earlier in the week with the guys. Because of what we’ve done over the past few years, we’re going to get everyone’s best shot.”