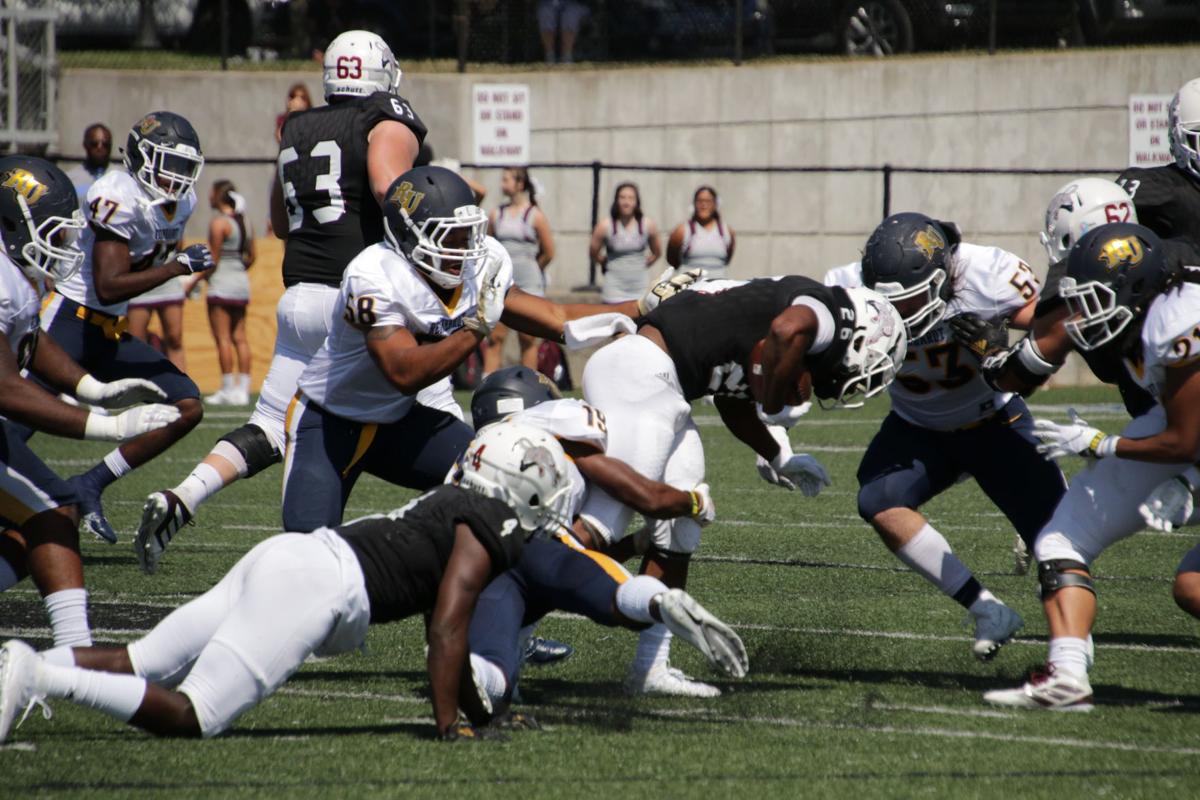 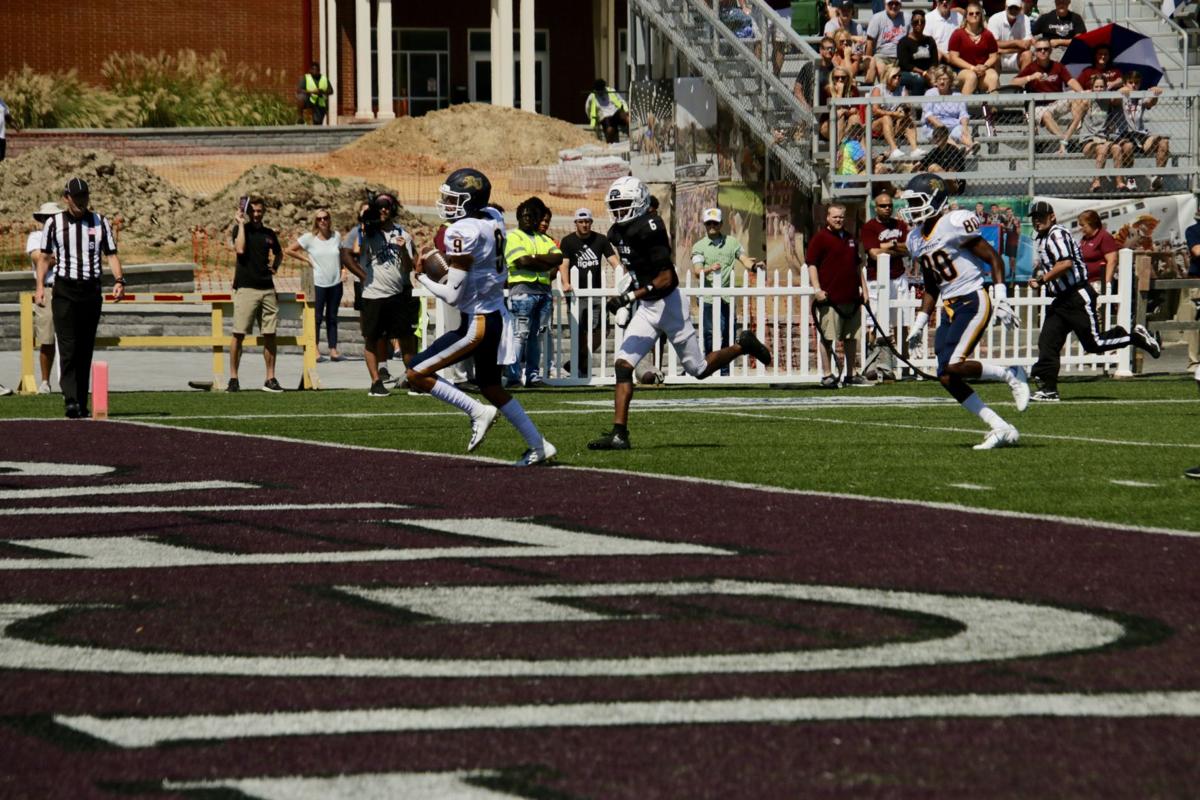 Reinhardt University quarterback Billy Hall crossed the goal for one of his two rushing touchdowns in Reinhardt's 28-0 win on Saturday in Campbellsville, Kentucky. 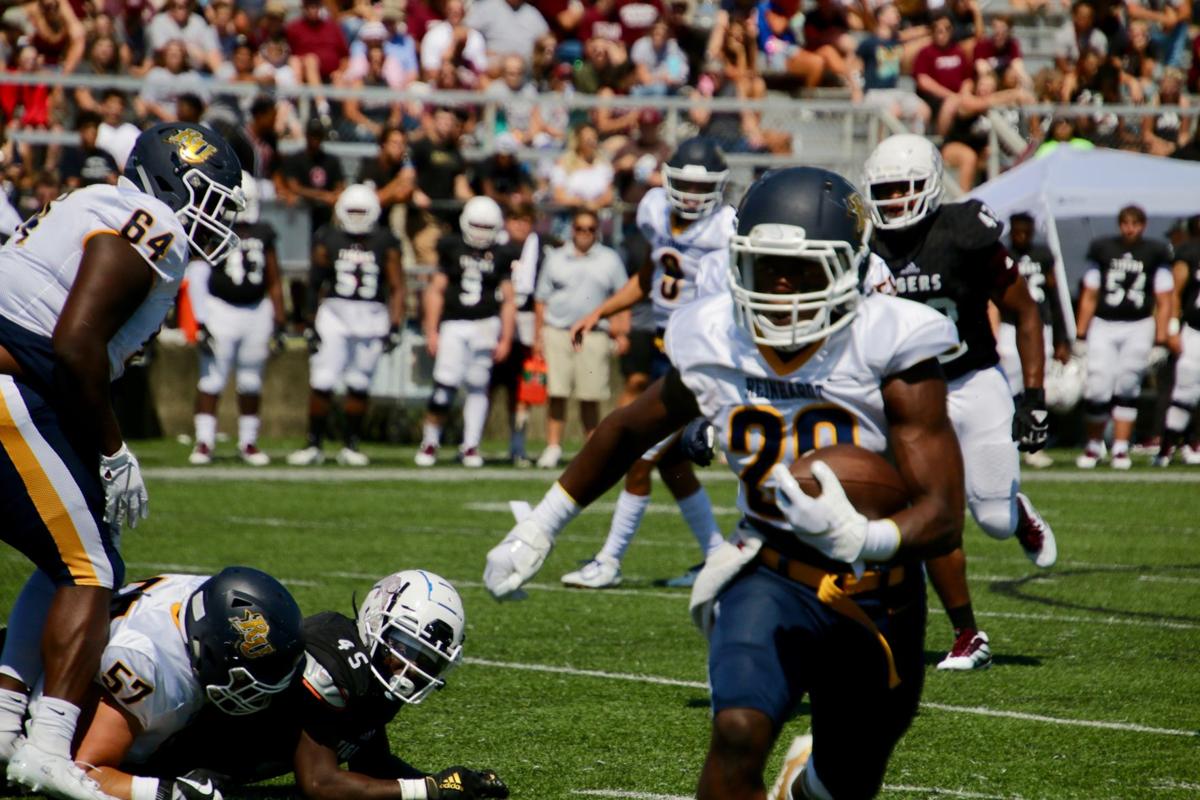 Reinhardt University quarterback Billy Hall crossed the goal for one of his two rushing touchdowns in Reinhardt's 28-0 win on Saturday in Campbellsville, Kentucky.

Reinhardt took to the road this past weekend for the first time this season, and despite missing several starters on defense, remained undefeated in impressive fashion.

No. 10 Reinhardt (3-0) defeated Campbellsville University 28-0 on Saturday in Campbellsville, Kentucky. It was the most points the Eagles have scored this season and the first time Campbellsville (0-2) has been shutout at home since 2007. The Eagles outgained Campbellsville 376-208 and head coach James Miller said he was pleased with the Eagles’ defense which recorded its first shutout since 2017.

“On any level of football, anytime you shut someone out its big time,” Miller said.

Reinhardt’s defense held Campbellsville to 0-for-10 on third down conversion attempts and stopped the Tigers twice on fourth down attempts. Sebastian Legarra led the team with seven total tackles while five different players recorded sacks for the Eagles. Sidney Hamm and Miles Corpening each recorded interceptions, and Miller pointed to several players on defense who have shown stark improvement this season.

“We’ve got two safeties that I think are really getting comfortable in Sidney Hamm and Kellen Neal. Brandon Ballard got the defensive player of the game for us and I thought Jaquez Hart played great too.”

Reinhardt played without three starters on defense including defensive end J.T. Graydon, linebacker Dawson Mitchell and defensive tackle Teon Burroughs, who were all out with injury. Ballard, a junior defensive end, finished with two tackles, one tackle for loss and one sack.

“Those guys up front don’t always get the numbers but they do the dirty work that allows the guys behind them to rack up the tackles,” Miller said. “I think our guys are just bought in to what our coaches are teaching right now.”

The big blow on offense came just before halftime when quarterback Billy Hall’s 74-yard touchdown run gave Reinhardt a three score lead and sent the Eagles into the locker room up 21-0.

“He’s faster than you think,” Reinhardt head coach James Miller said. “He might be the fastest guy on our team, but you don’t think so because he doesn’t have a long stride. That was just a read play we run and Billy (Hall) does a good job in the run game for us, he gets downhill quick.”

Hall finished with a game-high 150 rushing yards and two touchdowns while adding 89 yards in the air on 2-for-10 passing. Montralius Mosely also scored twice on the ground for Reinhardt while Trevae Cain added 102 total yards out of the backfield for the Eagles.

Miller was pleased with the win, but noted the offense and special teams are still a work in progress for the Eagles.

“We are improving on offense, but we still left some plays out there on the field,” Miller said. “We could have easily had 35 or 40 points if we do a few small things here or there. I think our quarterback is playing better and I think we’re doing some good stuff up front.

“We have to create more of an advantage in the kickoff and punt return game too. We’re not creating enough big plays and we probably lost that part of the game this week.”

Reinhardt will travel to West Palm Beach, Florida this weekend to take on Keiser University at noon on Saturday.