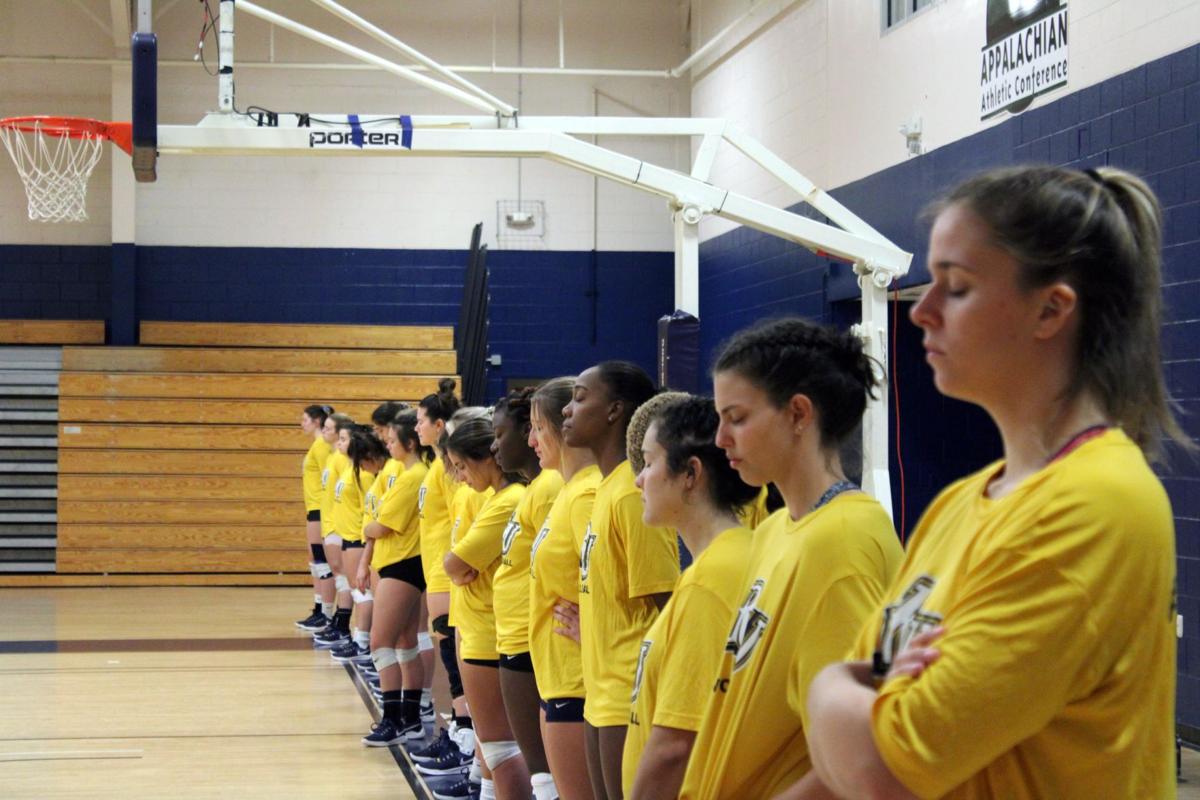 Reinhardt senior Isabelle Breitbarth (far right) stands on the end of the line as Reinhart players meditate during a team practice earlier this week in Waleska. 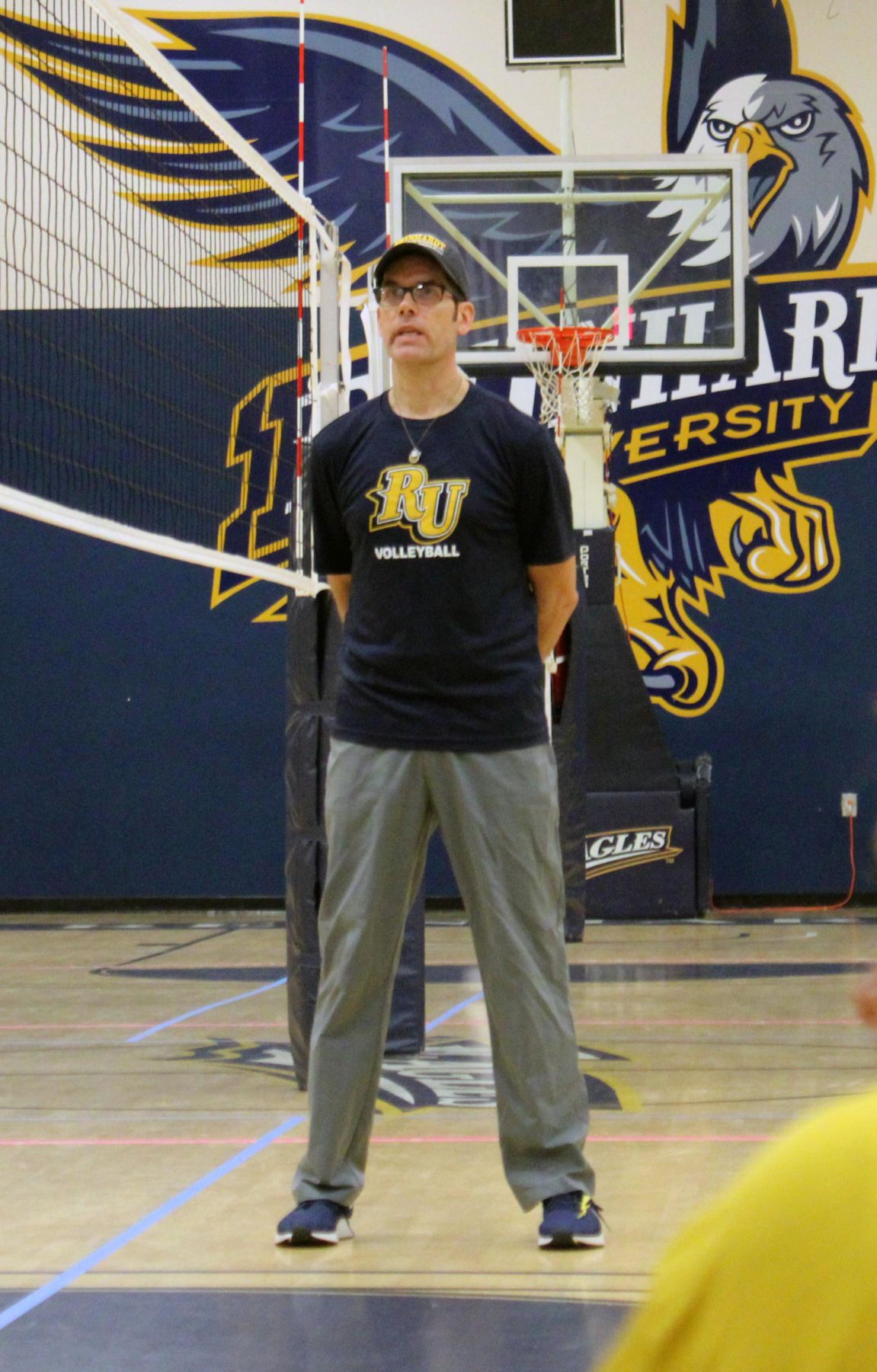 Brian Goodhind is in his third season as head coach of the women’s volleyball team at Reinhardt University. 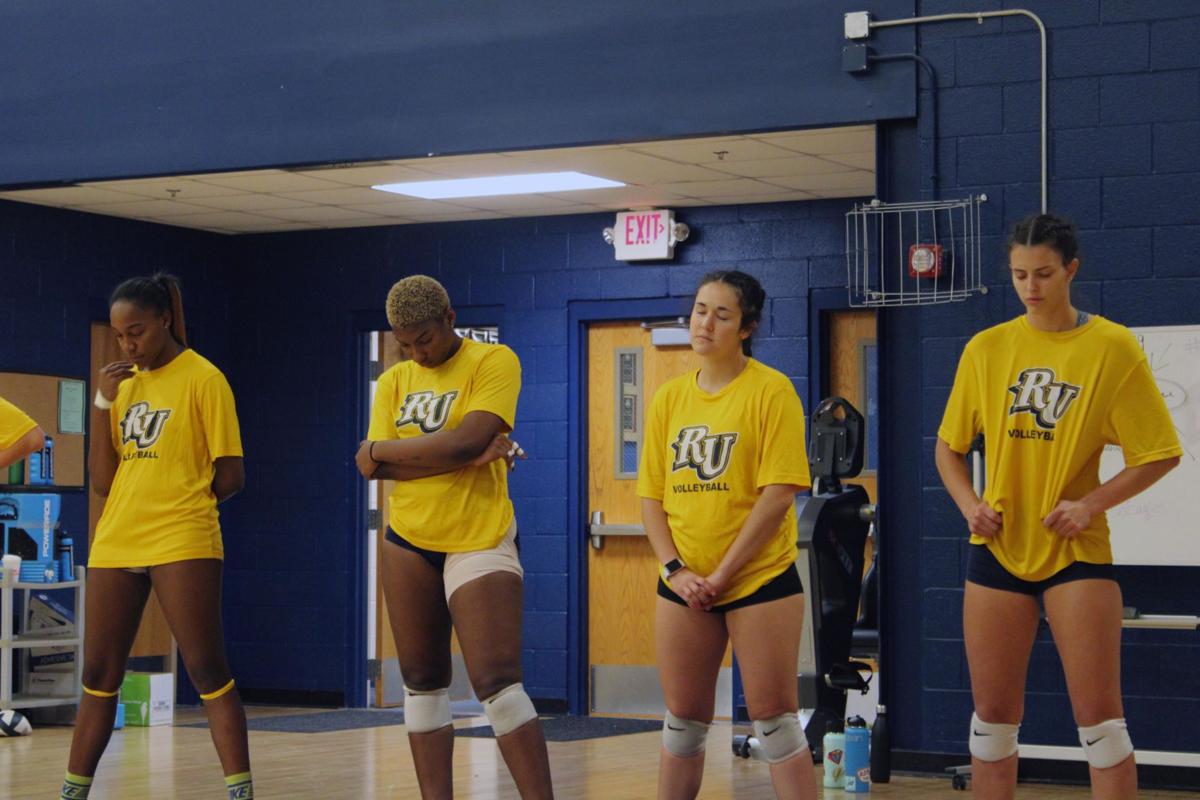 Players for the Reinhardt women's volleyball team meditate in silence during practice earlier this week in Waleska. 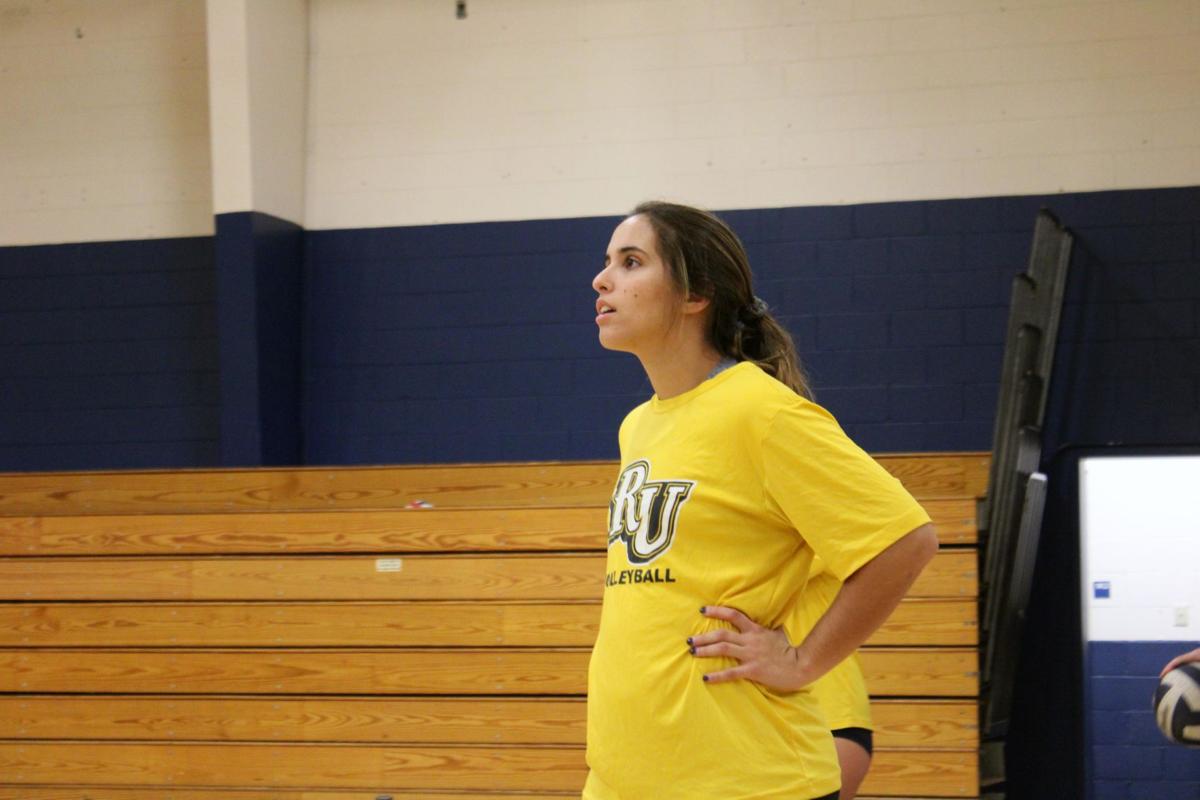 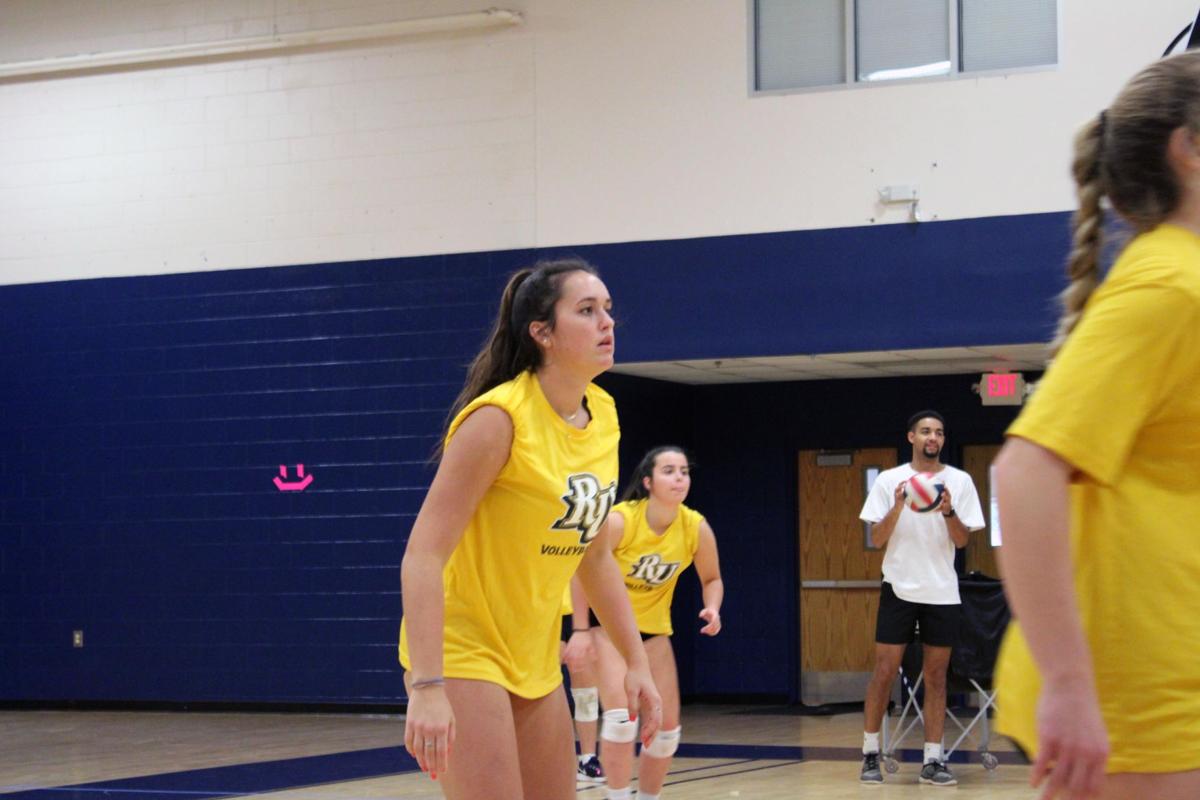 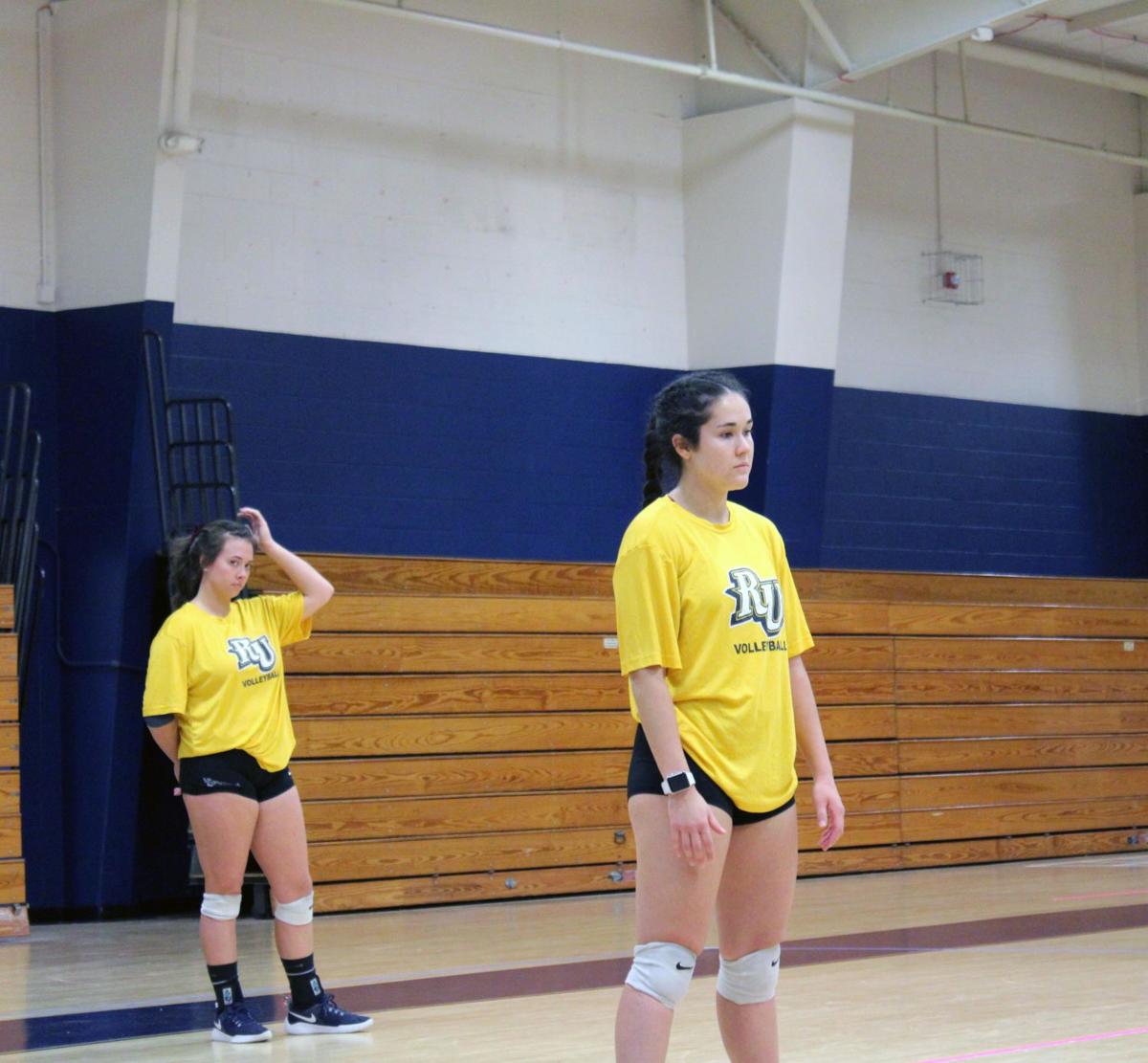 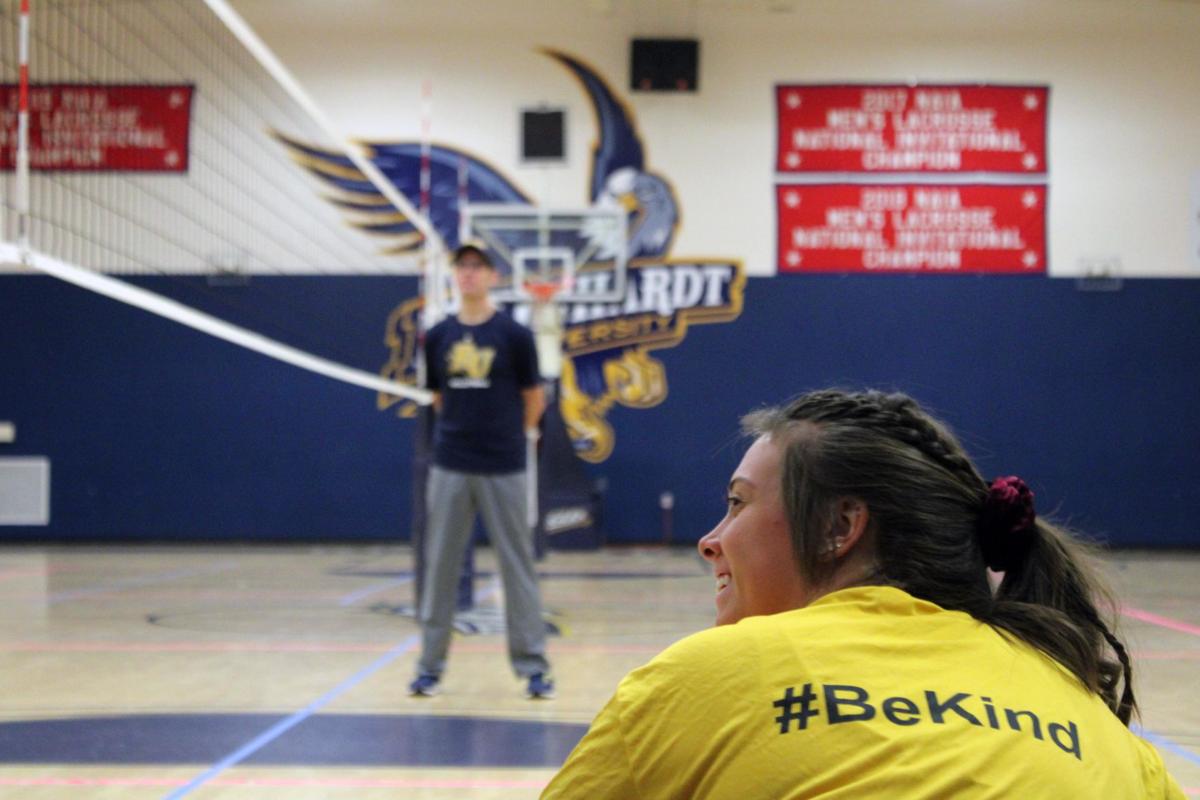 Reinhardt senior Kelley Adkins smiles at her teammate during a practice earlier this week in Waleska. 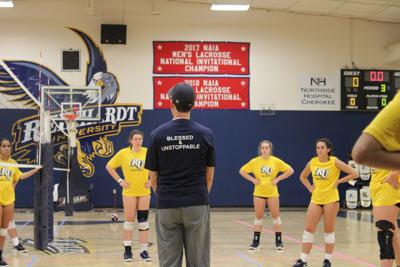 Reinhardt senior Isabelle Breitbarth (far right) stands on the end of the line as Reinhart players meditate during a team practice earlier this week in Waleska.

Brian Goodhind is in his third season as head coach of the women’s volleyball team at Reinhardt University.

Players for the Reinhardt women's volleyball team meditate in silence during practice earlier this week in Waleska.

Reinhardt senior Kelley Adkins smiles at her teammate during a practice earlier this week in Waleska.

WALESKA — In the silence before practice, a culture was changed.

Three years ago, Reinhardt’s volleyball team won only nine matches, and the players players who remain from that team said the atmosphere around the program was filled with animosity and apathy. Expectations were low to non-existent, and matches were played in mostly empty gyms.

A new coach was hired for the 2017 season and the difference in mentality and results can hardly be put into words for those who have experienced the full transition.

“It’s hard to explain how it was,” senior middle blocker Isabelle Diaz said. “It’s such a blessing how much everything has changed. I would have never thought we’d be where we are.”

THE MAN FOR THE JOB

Brian Goodhind was hired in 2017, and took over the Reinhardt program after previous stops at Webber International and NCAA Division I programs Bethune-Cookman and Rutgers.

The Massachusetts native made his way to Waleska hoping to bring a burst of enthusiasm, and his methods to motivate included a number of techniques that had nothing to do with digging, setting or spiking a volleyball.

“It wasn’t like we needed to do one or two things,” Goodhind said. “We’re talking about a complete physical and mental switch.”

Beyond the on-court tactics, Goodhind’s approach to foster a new mindset in his players was one of his highest priorities. He introduced new practice routines that first season which are still implemented in Year 3.

At the beginning of each practice, players line up along the baseline and are asked to close their eyes. For 60 silent seconds, they are asked to think about something or someone for whom they are grateful.

Following the minute of meditation, Goodhind asks each player, one by one, who or what they were thinking about and why. That is followed by another 30 seconds of mindful breathing meditation where players are asked to let go of any negativity that may have built up throughout the day.

New offensive and defensive systems, better workout routines and improved in-game tactics are important, but for Goodhind, improving how the players think about themselves was possibly the most important change.

“They were 9-20 season the year before I got here and had never advanced past the semifinals of a postseason conference tournament,” Goodhind said. “Everyone always preaches how its 80% mental and 20% physical, but they’ll train 100% physically and do nothing for the mental side. So, here, our percentage of what we do mentally is much higher than most programs.”

Last season, the Lady Eagles finished 35-8 and won their first Appalachian Athletic Conference tournament championship. They also hosted and won and opening-round of the NAIA tournament and advanced to Sioux City, Iowa, where the final 32 teams in the country squared off in pool play.

Reinhardt finished 1-2 in its three matches and was eliminated in pool play, but it defeated the No. 15 team in the country in the process and advanced further than any team in program history.

“That first year, it was a big focus on just changing the program around,” junior setter Erinn Marroquin said. “We were the underdog and we ended up winning the conference. The goals have changed every year. We know what we can do now, so I think now it’s more about showing other people when we get to that national level.”

Journaling is another tactic Goodhind brought with him, with players asked to write something every day, reflecting on something they did well and something they can improve on. During practice, if Goodhind shouts, “Who are we?” the players respond with, “We are Eagles.” If he shouts, “Who am I?” they respond, “I am a champion.”

“I’ve made them do that since Year 1 because they had to believe they were champions,” Goodhind said. “Whether you win or lose, you have to believe that. We do a lot of mental stuff like that.”

Two players, senior outside hitter Tessa Colden and setter Carlee Baxter, have been under Goodhind’s umbrella since their middle school days. Both played club volleyball in Florida under Goodhind and played for him while he was at Webber International.

When Goodhind left to take over at Reinhardt, Colden came with him, and Baxter followed suit one year later.

“He’s the reason I came to Reinhardt,” Colden said. “He really pushes us and holds us accountable. I’m 5-foot-7, and I play outside hitter because he believes in me. All my life, he’s been pushing me beyond my limits. Other people would doubt that I could actually be a hitter, but he lets me be a hitter because he knows, if I work hard enough and I’m smart enough, I can still do it.”

Colden was an honorable mention All-American last season, while Baxter was named the AAC Setter of Year.

“I stayed at Webber for my sophomore year, but I didn’t feel like I was growing as a player after he left,” Baxter said. “I just learn so much every time I’m with him. He’s always trying to inspire us and when it comes to volleyball he’s better than any coach I’ve ever had.”

This past week, Reinhardt defeated Point 3-1 in one of the few conference matches during the current streak that was competitive.

Goodhind said the victory over Point, more than any other match in his tenure, showed how much his players have grown.

“I knew Point, and I knew they were good,” Goodhind said. “They beat us in the first set and we were finally in that same situation we’ve been in where another team punched us, but, this time, we responded. We didn’t just push back, we shoved back. My team finally showed me they can handle adversity. They can handle it and they can dish it back. I got to see them grow.”

Players who experienced the year before Goodhind’s arrival say the mood around the team now has much more of a familial feel.

Members of Reinhardt’s men’s club team traveled along with the women’s reserves for last week’s match at Point, and that type of support did not go unnoticed by the players.

But beyond the wins, what the players seem to appreciate most is the change in the day-to-day structure within the program. Goodhind, who said his faith in God drives everything in his life, said the idea of sacrificing for something bigger than one’s self is an ideal he has tried to instill within the program since his first day on the job.

The national recognition may come, but there is no denying that Goodhind’s arrival changed what was possible in the mind of his players.

“There was so much potential here,” Diaz said. “I’d be lying if I said we haven’t improved tremendously since he’s been here. It’s hard to put into words. I didn’t even know that nationals existed. That wasn’t even talked about. It was never once mentioned.

“Then, Coach B gets here, and he’s talking about the first round of nationals — the actual national tournament — and telling us we have the potential to get there, and then we did. It’s insane.”