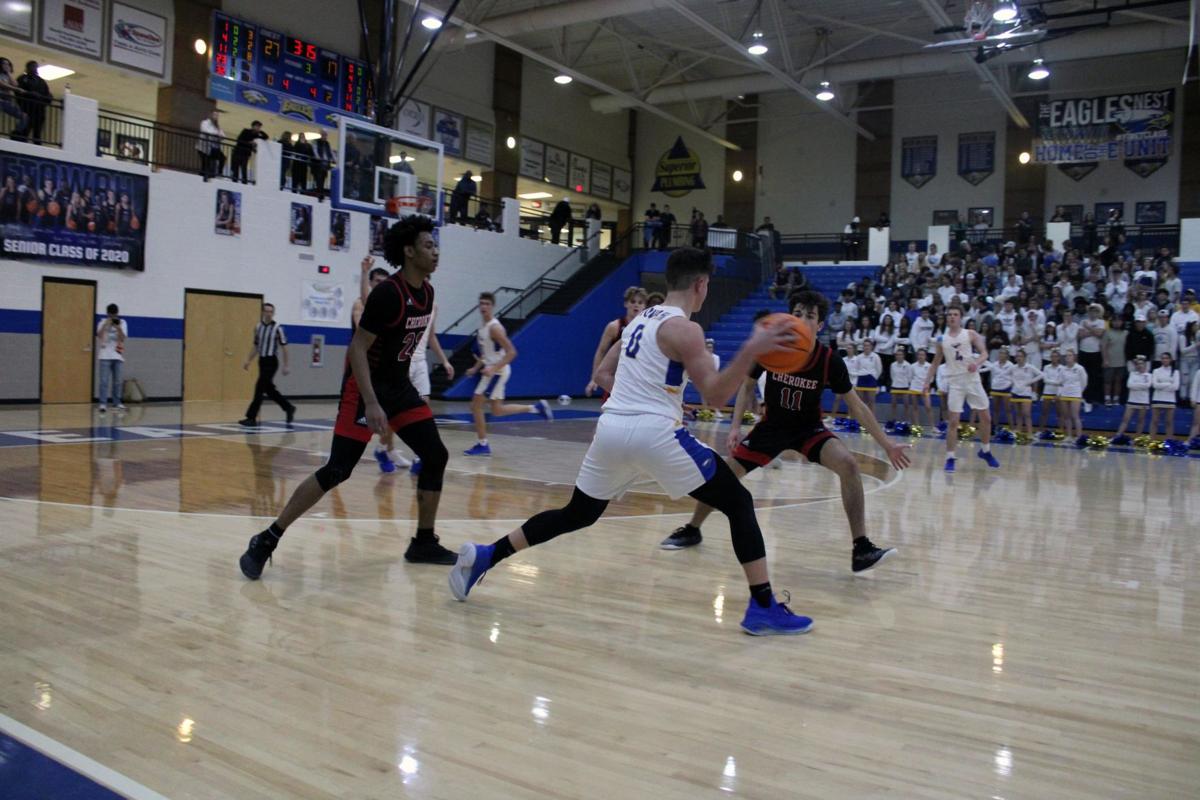 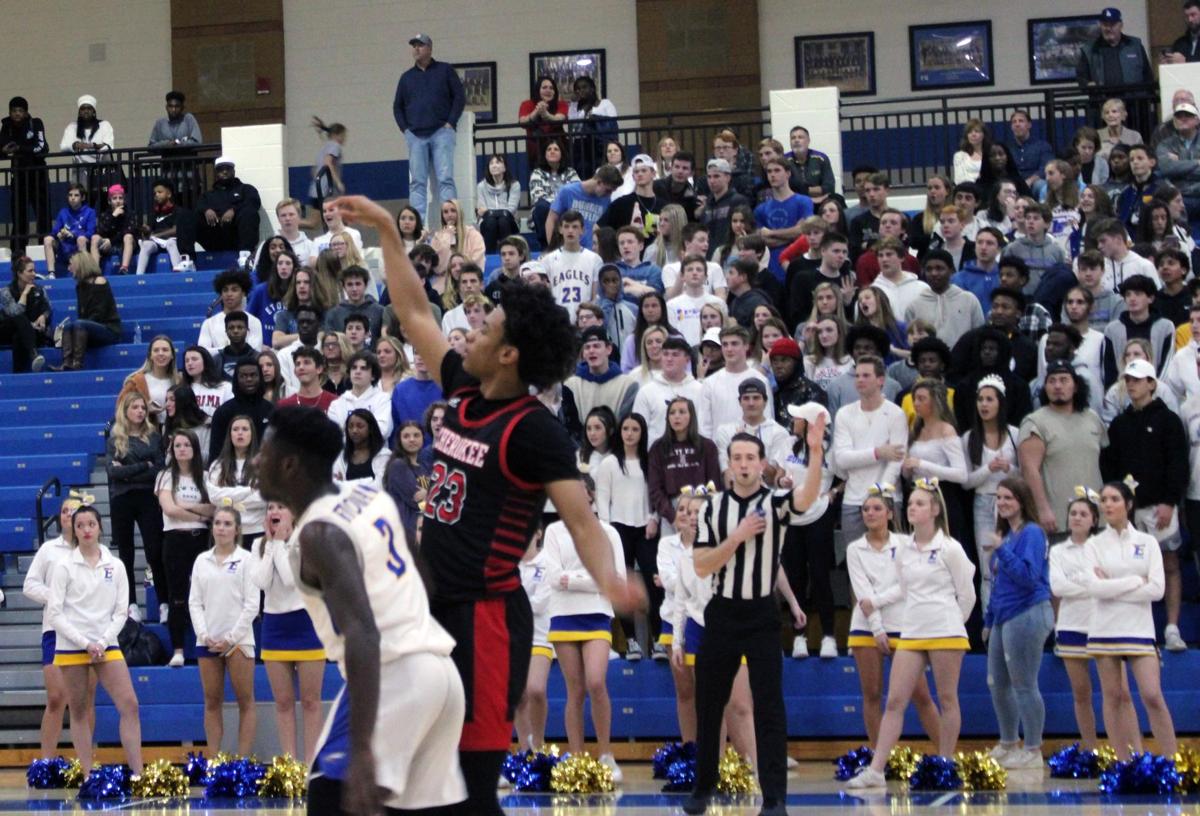 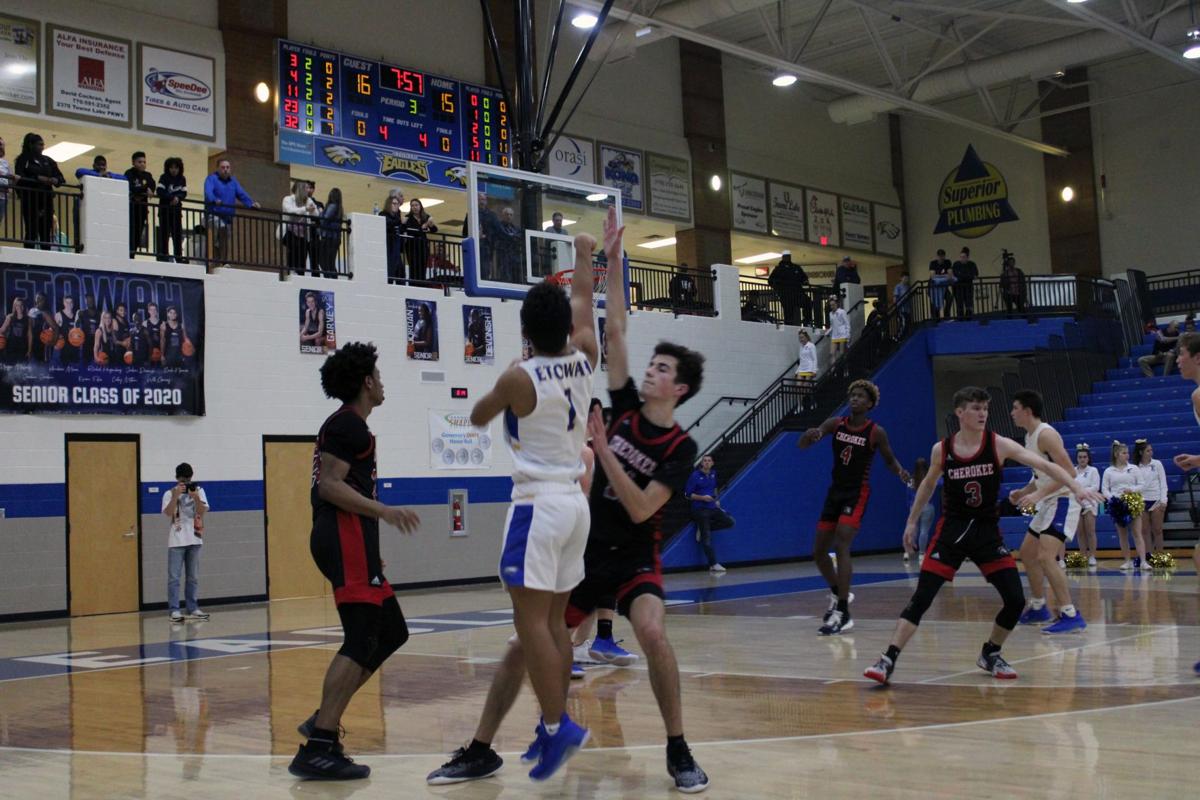 Etowah's Cole Ellis (1) goes up for a shot with Cherokee's Bennett Ulm defending during Friday night's game at Etowah. 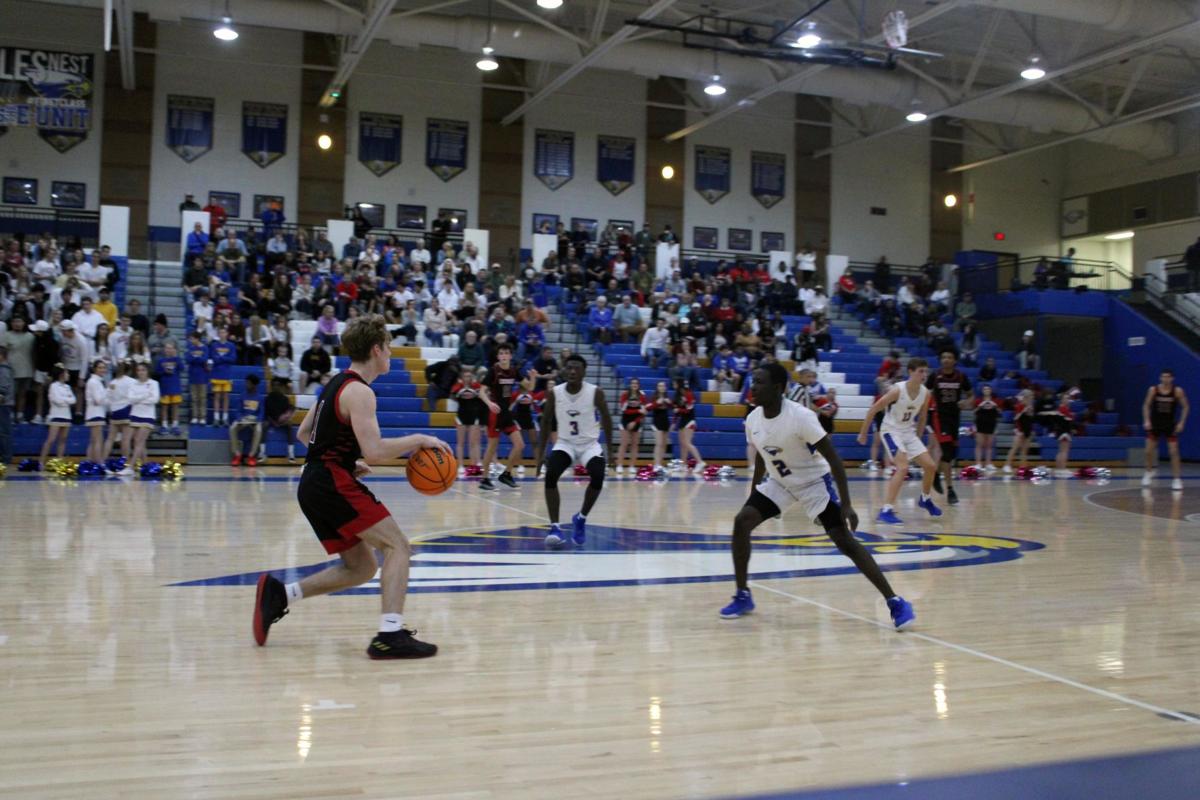 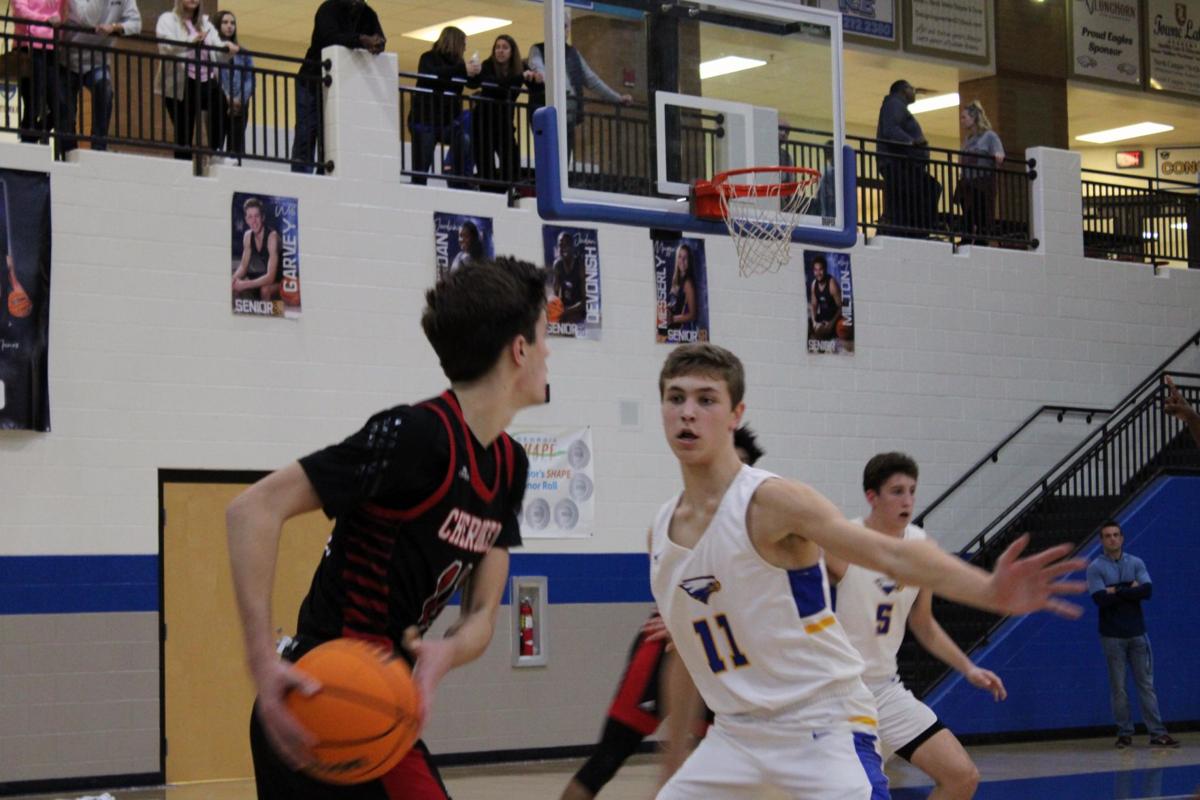 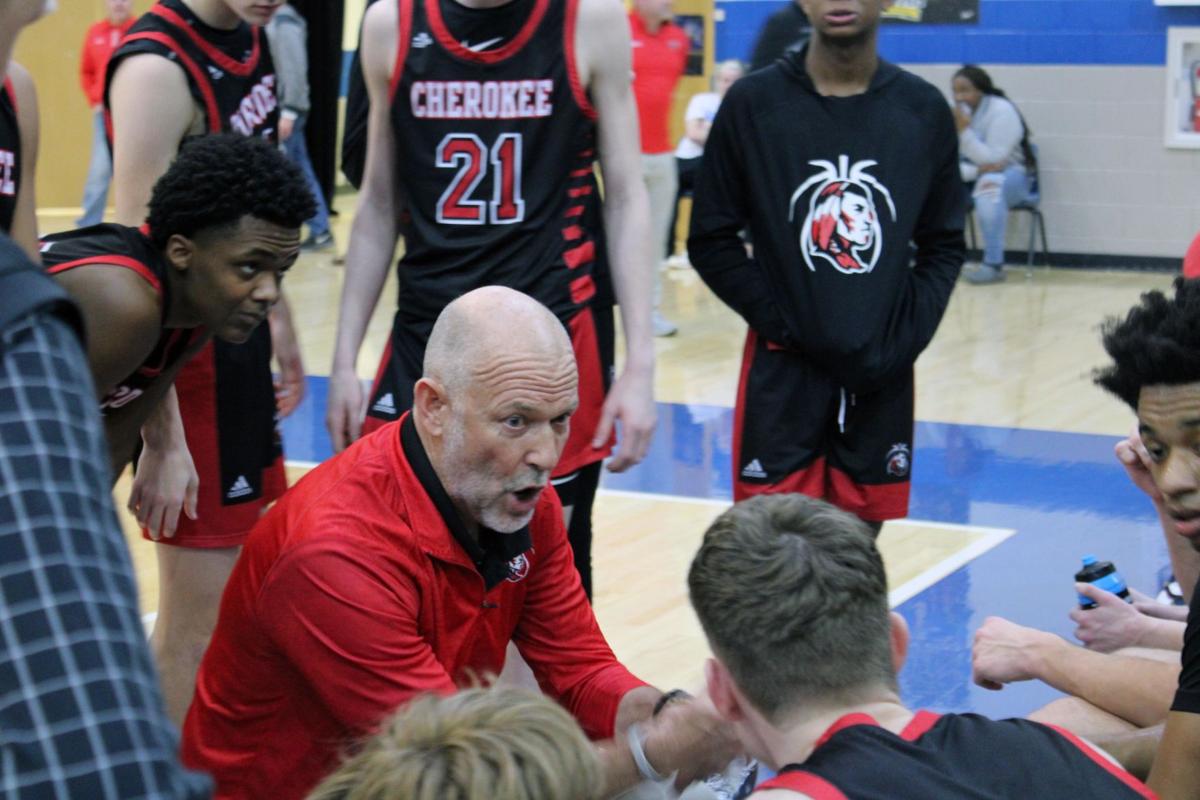 Cherokee coach Roger Kvam talks with players during a timeout at Etowah on Friday night. 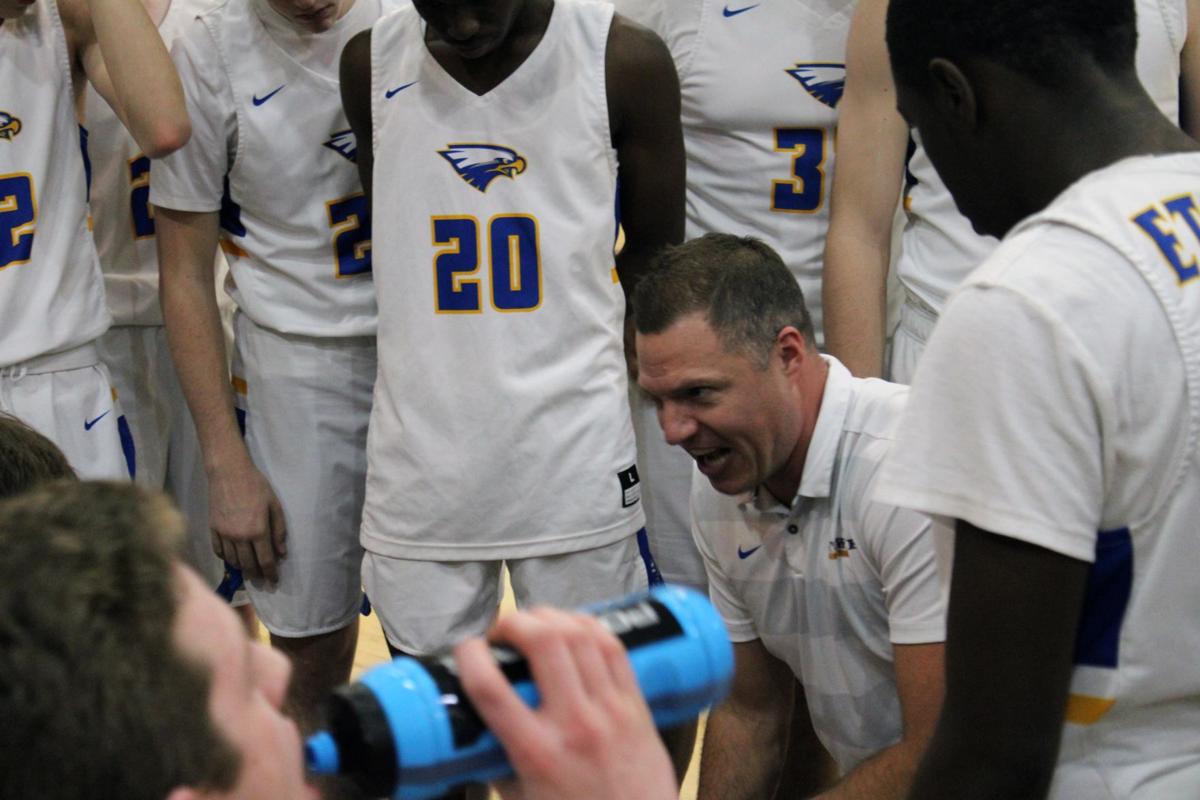 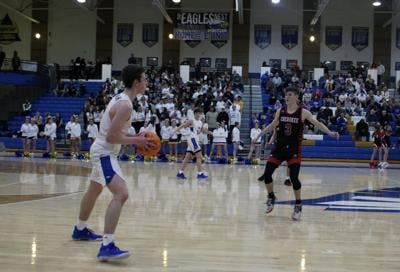 Etowah's Cole Ellis (1) goes up for a shot with Cherokee's Bennett Ulm defending during Friday night's game at Etowah.

Cherokee coach Roger Kvam talks with players during a timeout at Etowah on Friday night.

WOODSTOCK — For a team looking to get over the hump, Friday may have been a pivotal step.

Cherokee earned a 46-36 road win at Etowah on Friday in a rematch of last season’s Region 4AAAAAAA championship game. A 15-4 third quarter run for Cherokee (17-2, 4-1) proved to be the difference between a pair of teams at the top of the region standings. The win moved the Warriors into a tie for first place in the region with Etowah (13-5, 4-1) which lost its first game of the new year.

It was also the first win for Cherokee over Etowah in the last six meetings between the two programs. The Warriors last win over Etowah came in January 2017 and for a program looking for its first region championship in its 64-year history, the win could end up being a motivational boost.

“I’ll tell ya, I have so much respect for Jason (Dasinger) as a coach,” Cherokee coach Roger Kvam said. “He gets those kids to play so hard and they run really good stuff. He’s just a great coach so that was a big win for us. We hadn’t beaten them in a while.”

Defense and rebounding on both ends of the court highlighted the first two quarters. The effort level for both teams was what one would expect from the top two teams in the region but points were hard to come by. Highlight reel blocks by Etowah’s Will Garvey and Kavon Fishe helped stymie the Warriors’ offense but the Eagles’ were unable to find their own offensive rhythm against the extended 1-3-1 zone defense of Cherokee.

Cherokee’s defensive length seemed to trouble Etowah’s guards but the Eagles’ offensive rebounding gave Etowah multiple second chance opportunities which the Eagles’ shooters were unable to capitalize on. Etowah had a number of good looks from 3-point territory in the first two quarters but were unable to connect on any.

Junior forward Colby Flaig picked up the scoring for Etowah, scoring 11 of the Eagles’ 15 first half points, but Cherokee led 16-15 entering the halftime locker rooms.

“Cherokee did some good stuff defensively and I did not adjust to their length until pretty much the fourth quarter,” Etowah coach Jason Dasinger said. “I told my guys I was extremely proud of how hard they played and if they continue to play that hard they’ll have a chance to win a region championship.”

Coming out of halftime the Warriors’ defensive pressure took its toll. Junior guard Taihland Owens, who finished with a team-high 16 points, knocked down a 3-pointer to open the third quarter and began to find his rhythm. It was turnovers by Etowah, however, which led to transition points for Cherokee and spurred the run.

Bennett Ulm continued to look like one of the better on-ball defenders in the county and scored six straight points in the quarter before Elijah Tucker capped the frame with a dunk. Cherokee led 31-19 at the end of the third.

“They were getting really good looks in the first half and just not making them,” Kvam said. “We were fortunate to be up at half but we also made so many mistakes defensively. Just little things like closing out and rebounding. We addressed that at halftime and I thought we did a better job at both ends in the second half.”

The 36 points was the second lowest point total for Etowah this season as the Eagles had trouble finding their outside shot. It wasn’t until the fourth quarter when Flaig made Etowah’s first and only 3-pointer of the game. Flaig finished with a game-high 18 points while Garvey added seven points.

“(Dasinger) is really a genius offensively,” Kvam said. “They run such good action and they don’t take bad shots. They don’t go away and they’re just tough to beat. It’s a great win for us.”