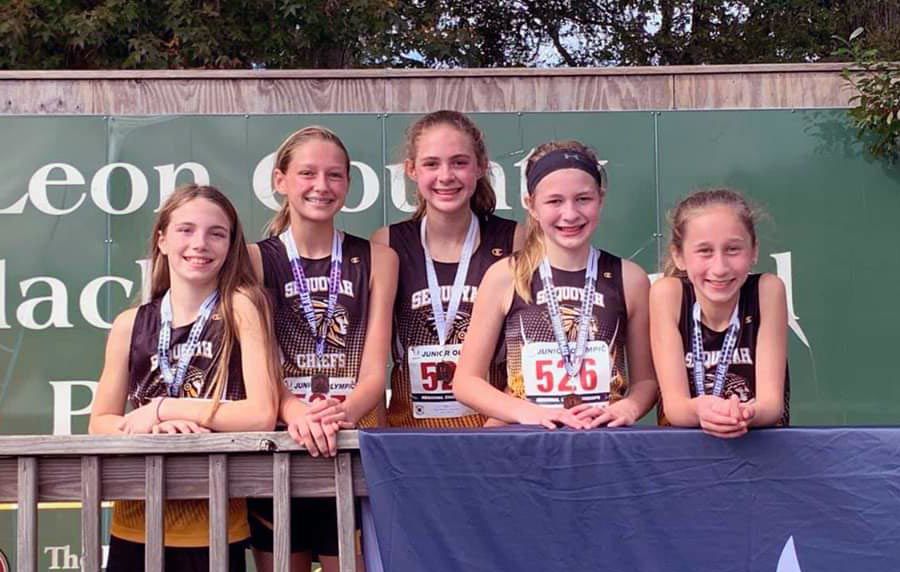 Above: From left, Abigail Reiner, Lily Savage, Addison Higgins, Rebekah Rogers and Eleni Giannopoulos will represent the Sequoyah Junior Chiefs at the USATF National Junior Olympic Cross Country Championships on Saturday in Madison, Wisconsin. Below: Higgins helped the Junior Chiefs qualify for nationals with her team-best time at the regional meet. 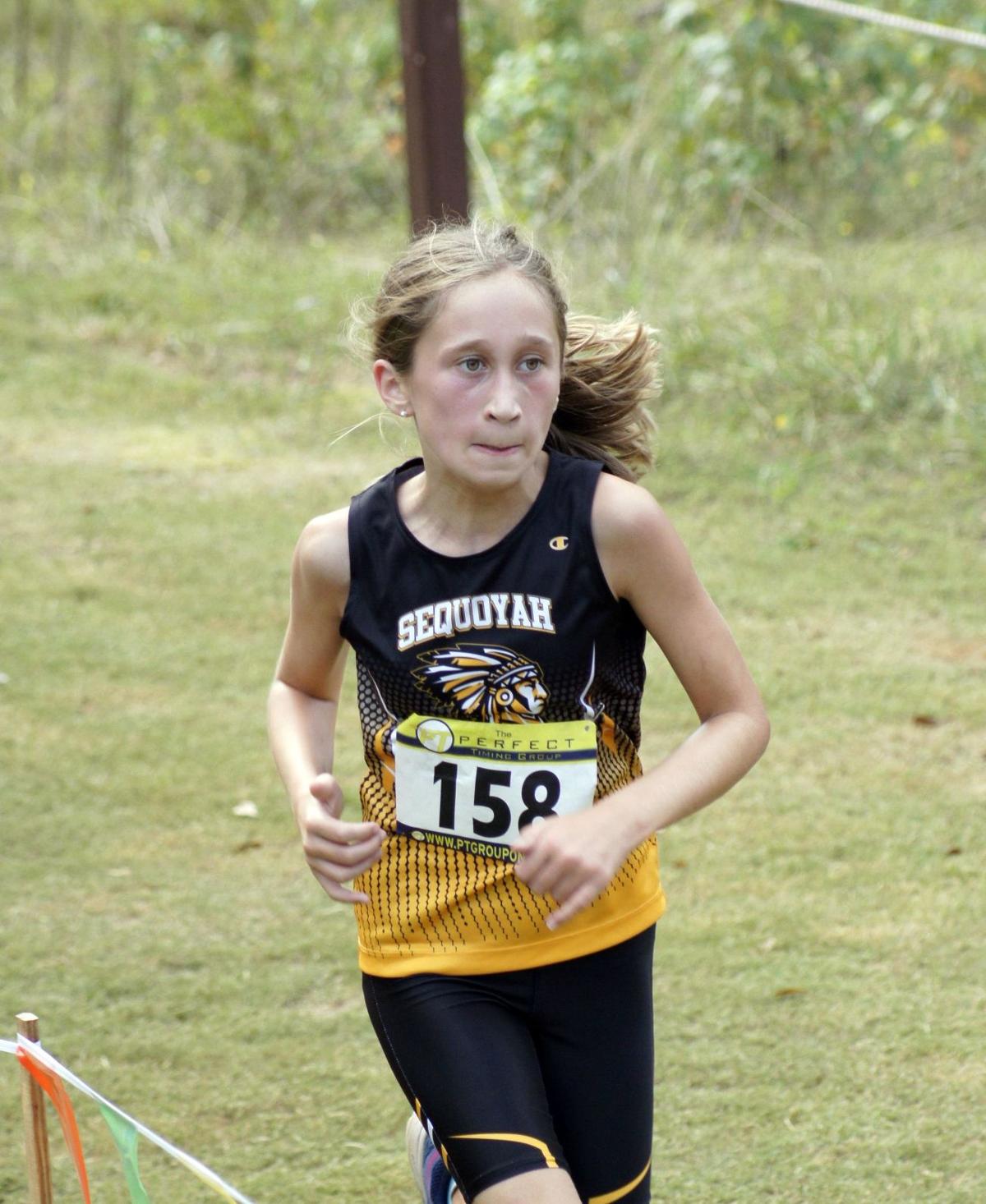 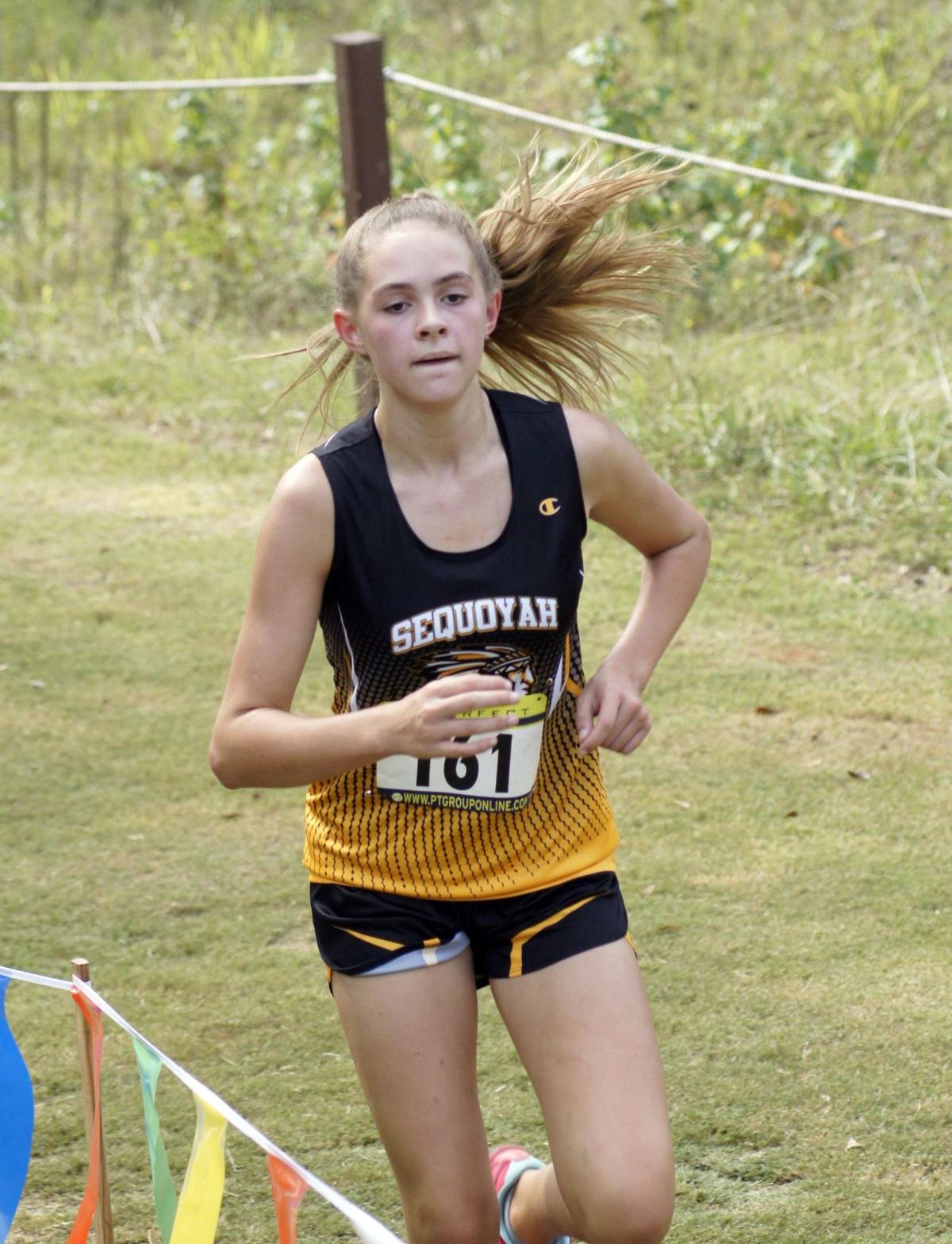 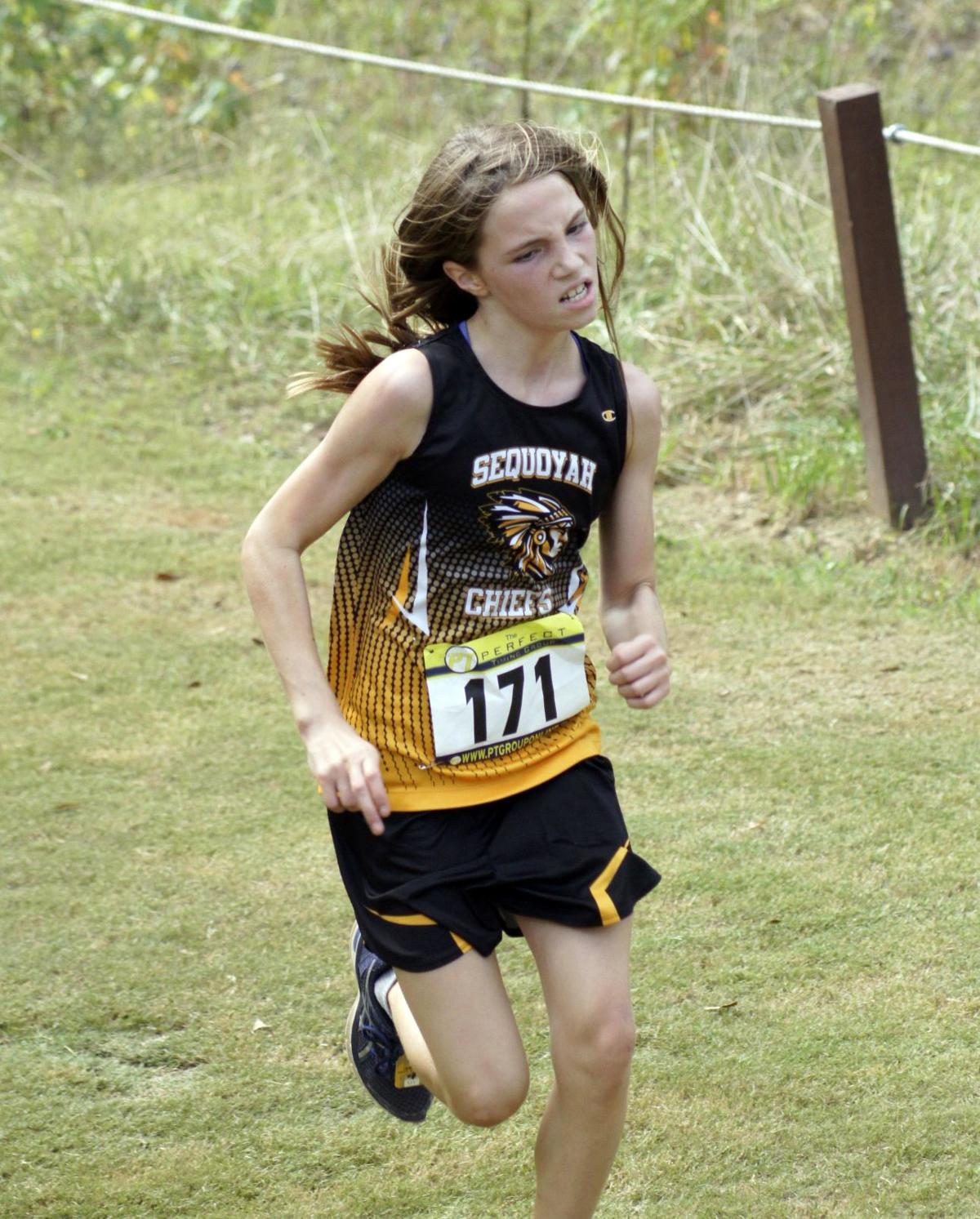 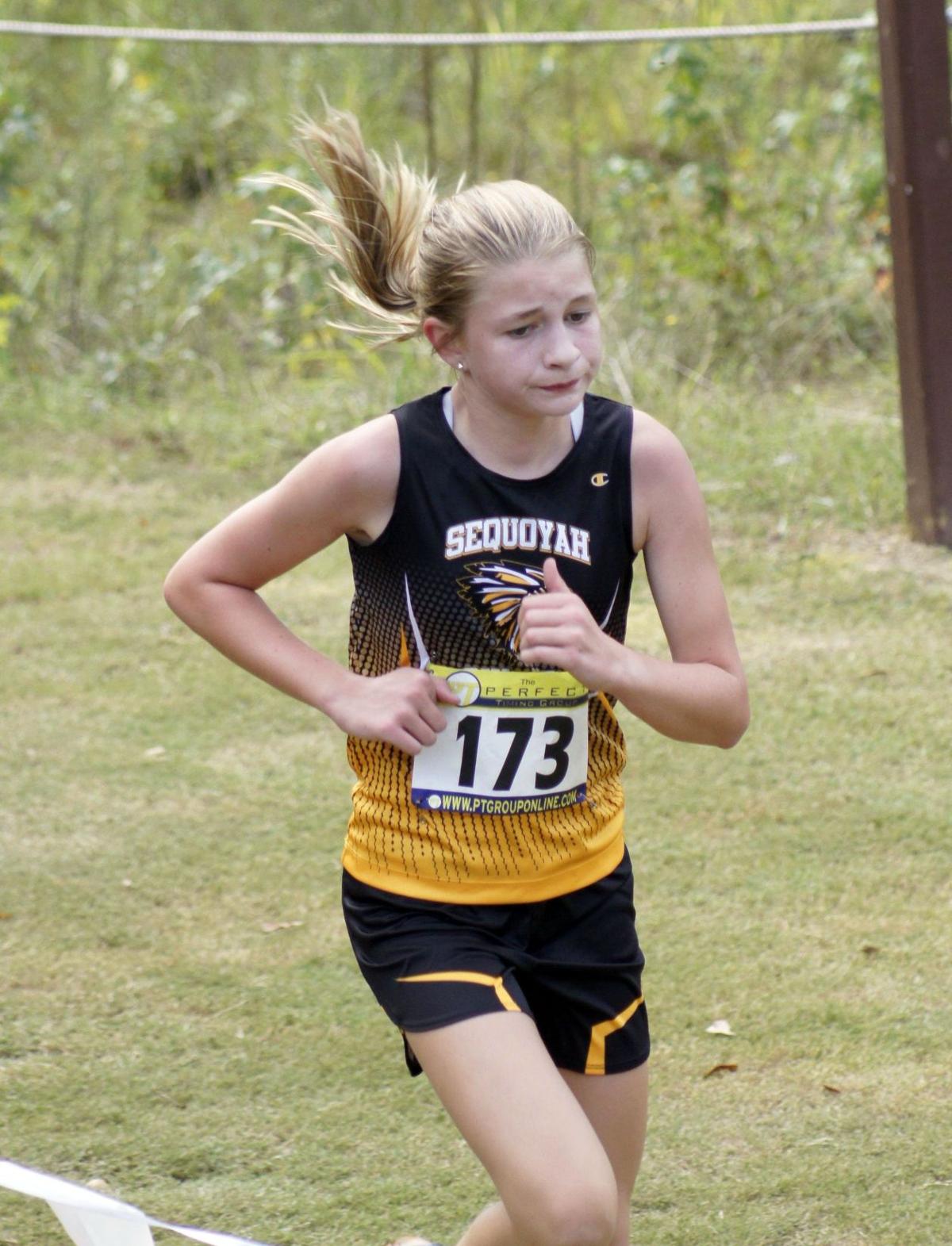 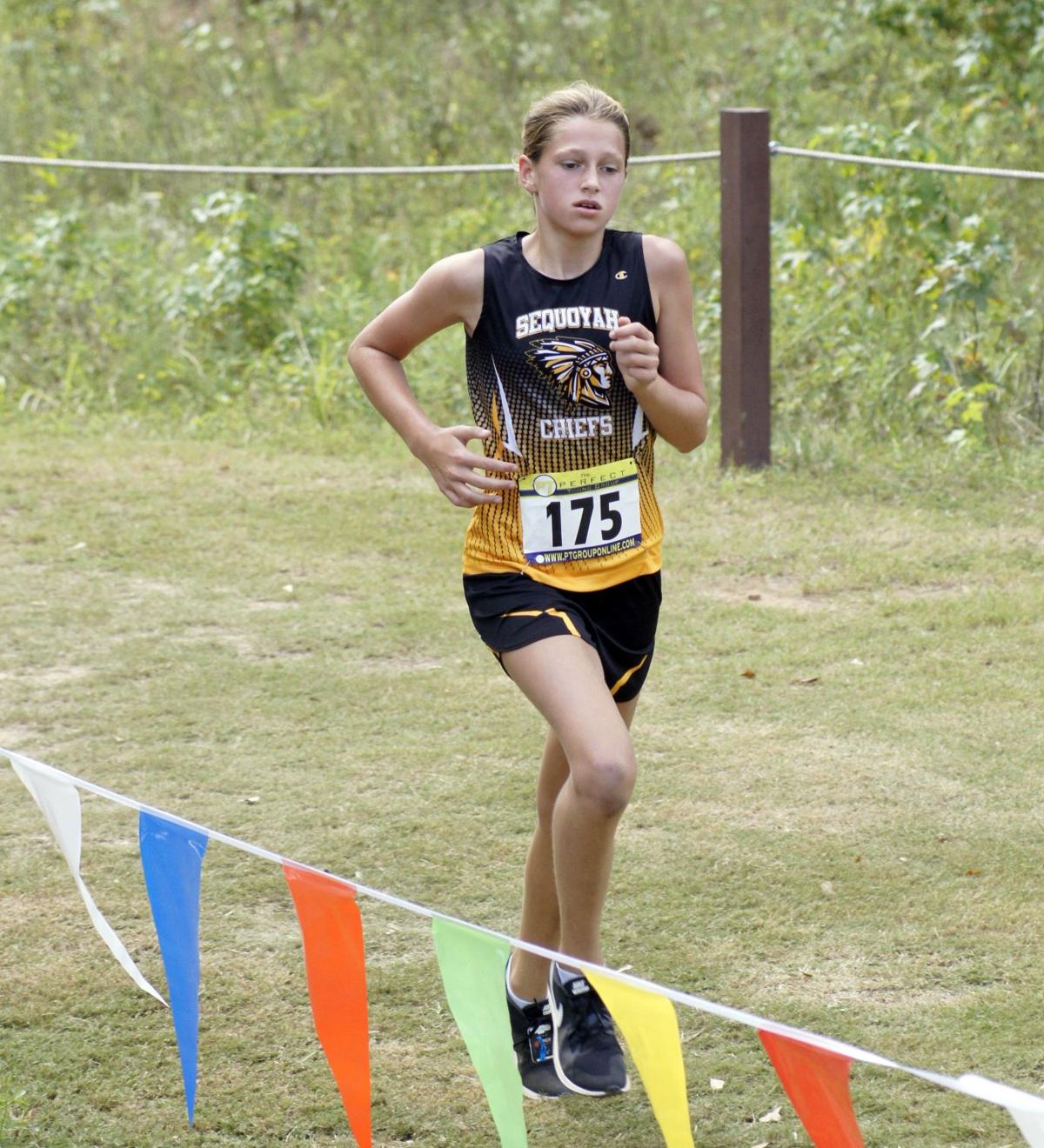 Above: From left, Abigail Reiner, Lily Savage, Addison Higgins, Rebekah Rogers and Eleni Giannopoulos will represent the Sequoyah Junior Chiefs at the USATF National Junior Olympic Cross Country Championships on Saturday in Madison, Wisconsin. Below: Higgins helped the Junior Chiefs qualify for nationals with her team-best time at the regional meet.

Canton and Holly Springs residents may have seen a group of girls running through the neighborhoods over the past few months, and now that same group will be running on a national stage.

First-year Sequoyah Junior Chiefs coach Bill Reiner said the only issue he has with this group of runners is teaching them to pace themselves.

“With this specific group of girls, they just want to go,” Reiner said. “I have to be the one to tell them to slow down sometimes.”

Before advancing to Tallahassee, the Junior Chiefs competed in the middle school state championships Oct. 12 in Cochran. The runners, who all come from Dean Rusk Middle School, finished as champions of the large-school division after beating out 26 other schools from around the state.

The Junior Chiefs' top five runners all finished in the top 22 and posted an average time of 14 minutes, 17 seconds in the 2-mile race.

The performance in Florida may have been even more impressive, however.

Higgins paced the group with a time of 11:47 in the 3K, good for third of 84 runners. All five of the Junior Chiefs finished in the top 19, with the final runner coming in 45 seconds behind Higgins.

A number of teams from metro Atlanta were in attendance, including the Etowah and River Ridge youth programs, which finished third and sixth, respectively.

“What kind of makes us unique is that we pull all of our runners from one school,” Reiner said. “Most of the track clubs are pulling kids from much larger areas. Most of our girls actually live in the same neighborhood. When we practice, we use different kids' houses as landmarks on where to turn.”

According to Reiner, Harmony on the Lakes is where the group does most of its training. He credits the team’s former coach, Jon Kendall, with establishing the program and said the support from the Sequoyah booster club has been very helpful to the development of the youth club.

Reiner said the team regularly trains at the high school race distances. Managing the wear and tear on athletes who are still developing is something Reiner is keenly aware of, but he credits the training with positively impacting all areas of the runner’s lives.

Temperatures are forecast in the low 30s Saturday in Wisconsin, which may not be ideal for a group of runners who practiced in near-record heat this fall. Whatever the results, Reiner said the outcome goes well beyond the scoreboard.

“It’s been amazing watching them develop,” he said. “Their work ethic is apparent in everything they do. They’re all student-athletes, and their discipline transfers to all areas of their lives.

“I think, for a lot of them, it's a break from their day, because they come to practice and their with their friends. They look forward to that time and they celebrate each other’s victories.”