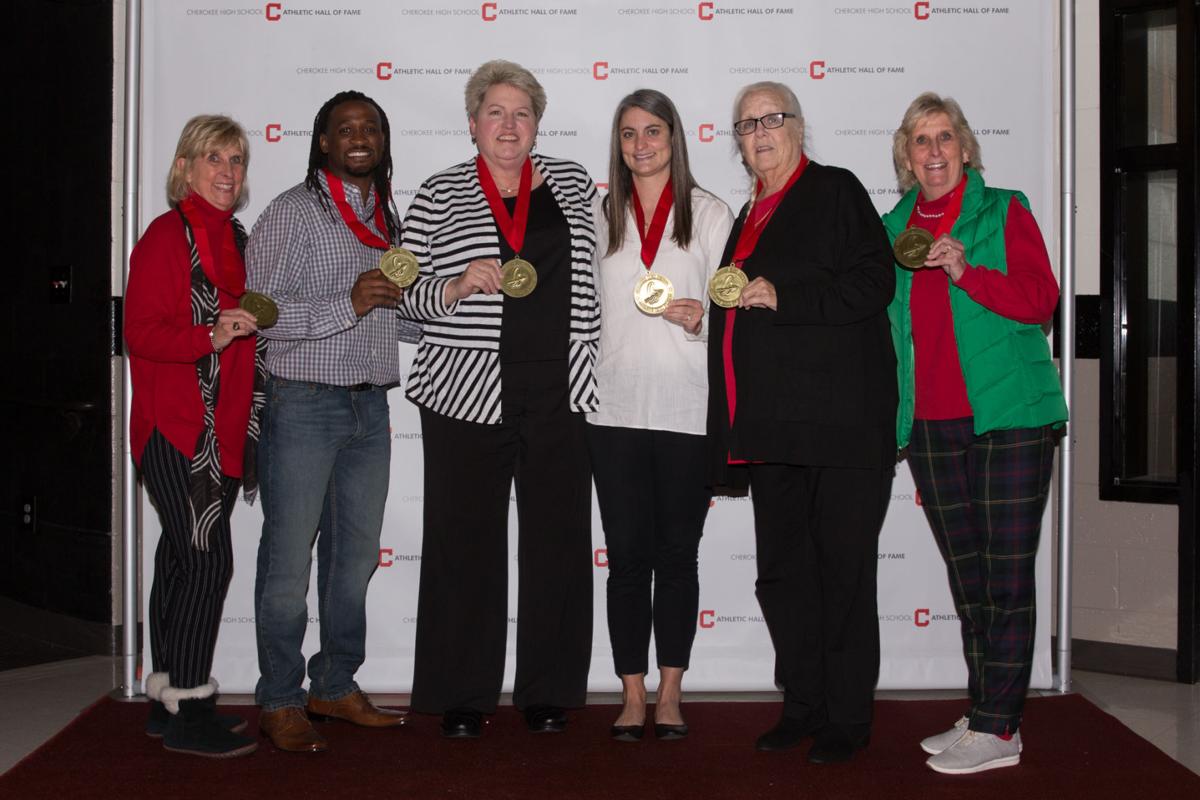 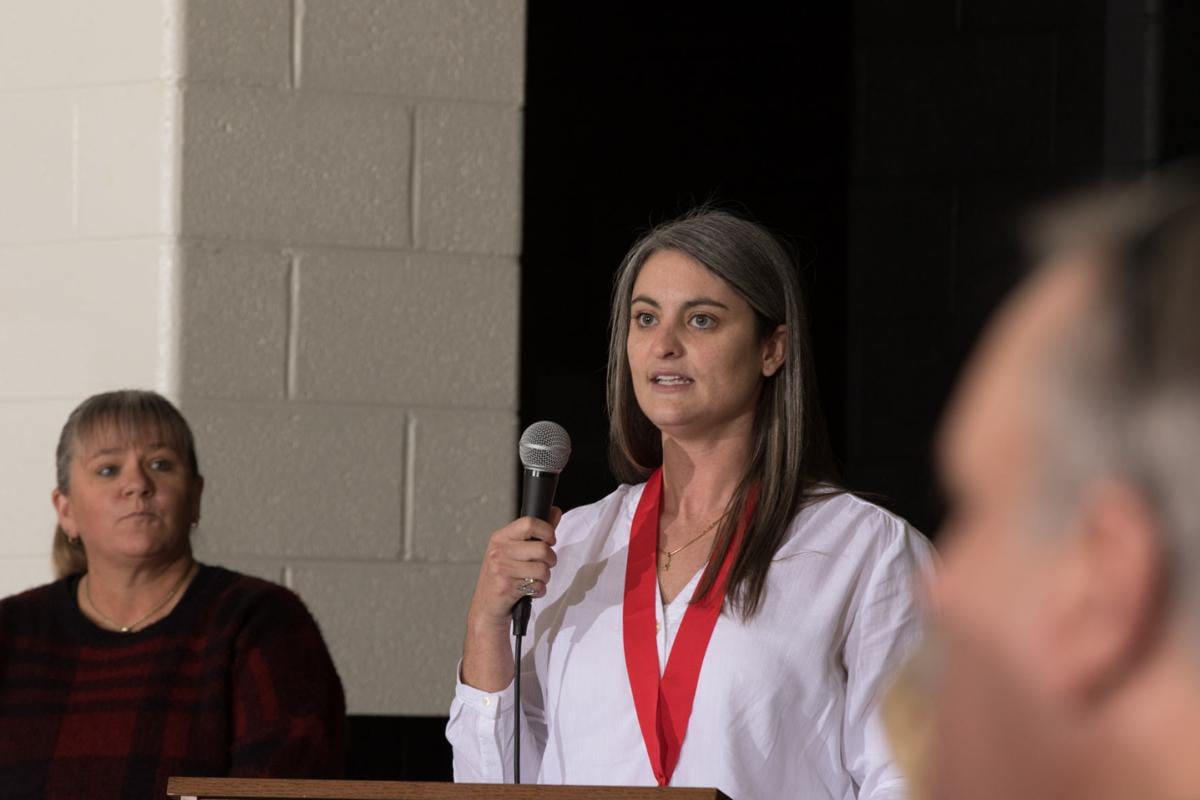 Cherokee 2007 graduate Sharon Swanson was speaks to the crowd during her induction into Cherokee's athletic Hall of Fame on Saturday in Canton. 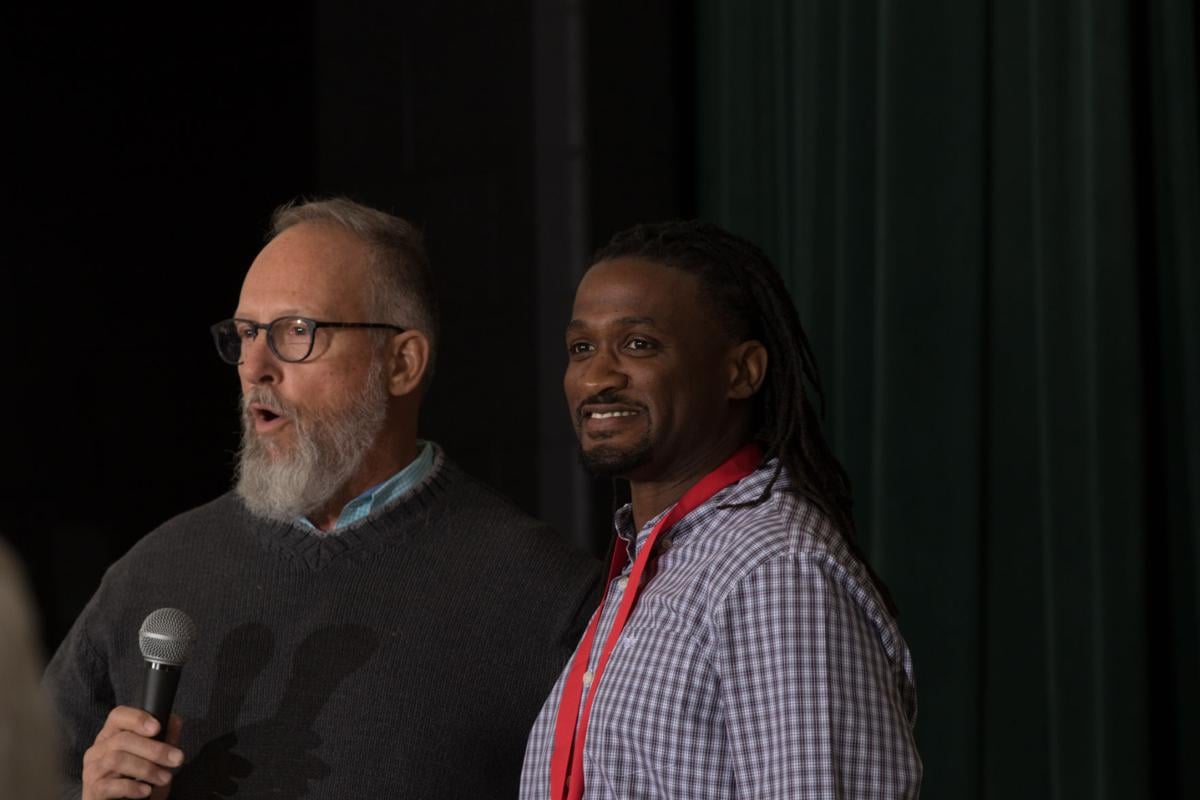 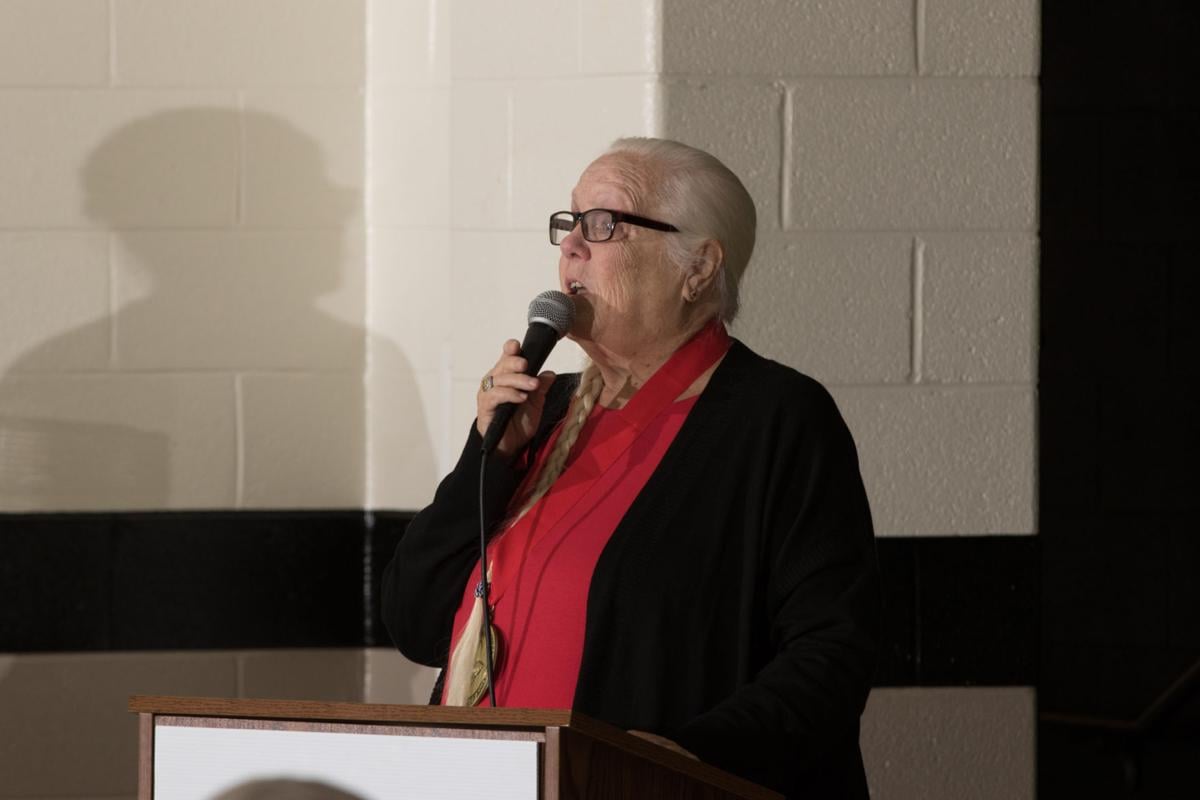 Cherokee High School 1967 graduate Helen Mauldin King speaks to the crowd during her induction ceremony on Saturday in Canton. 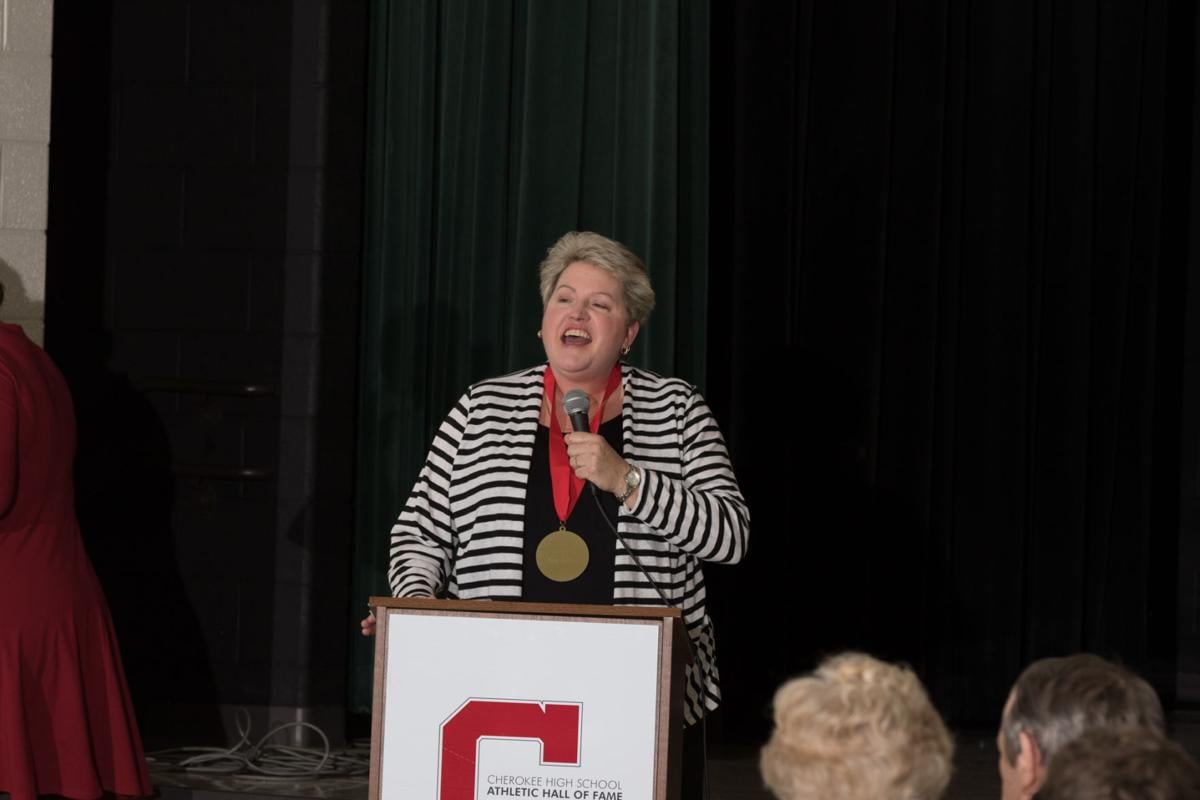 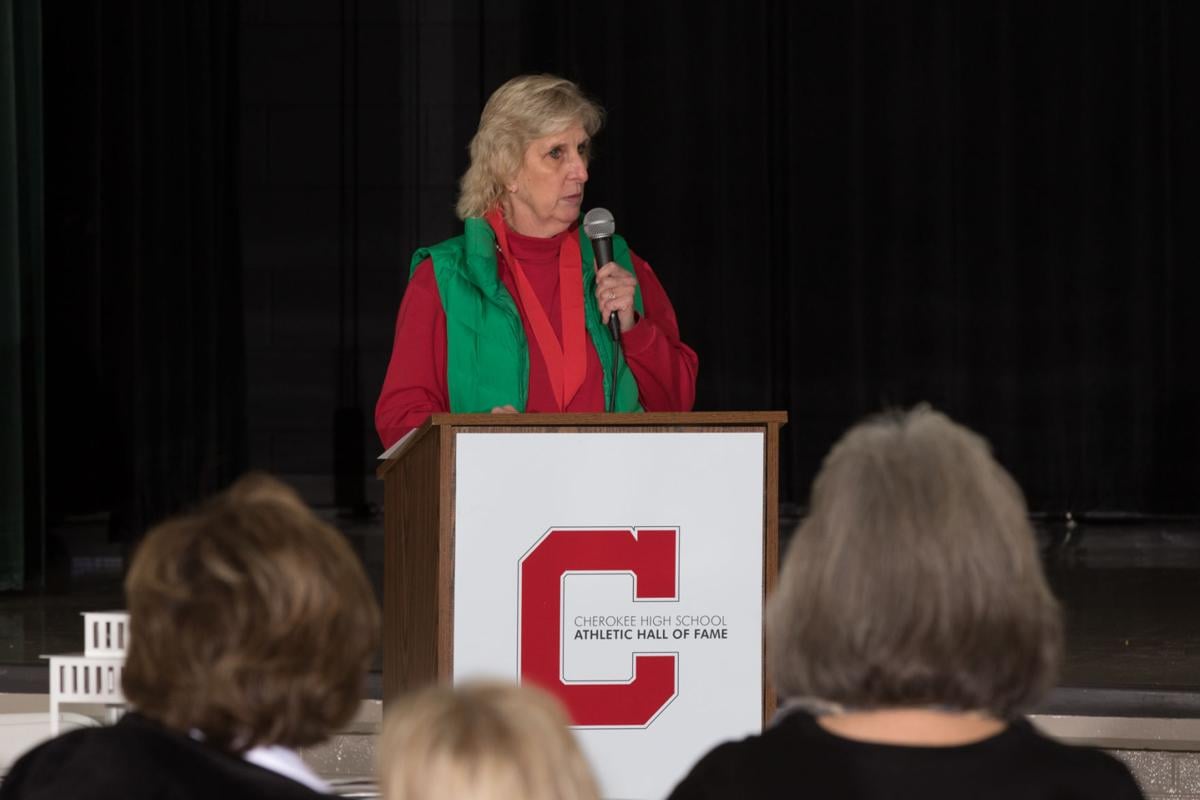 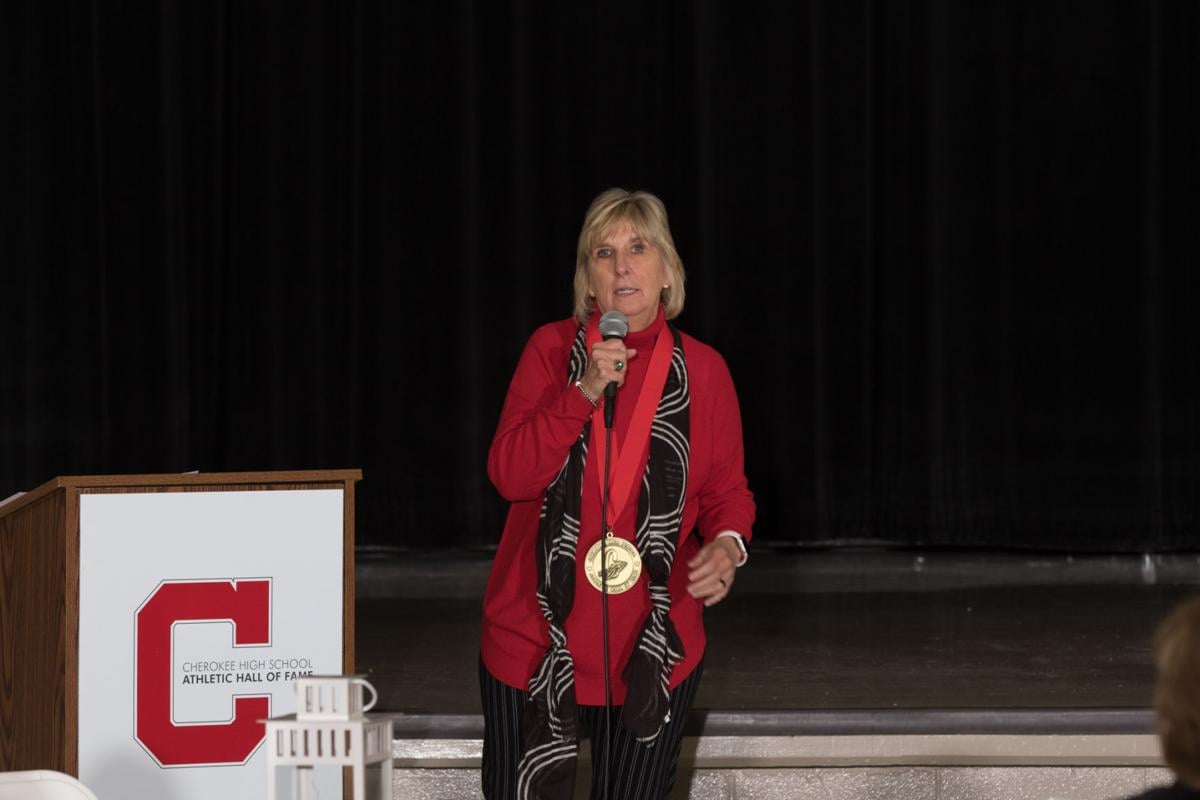 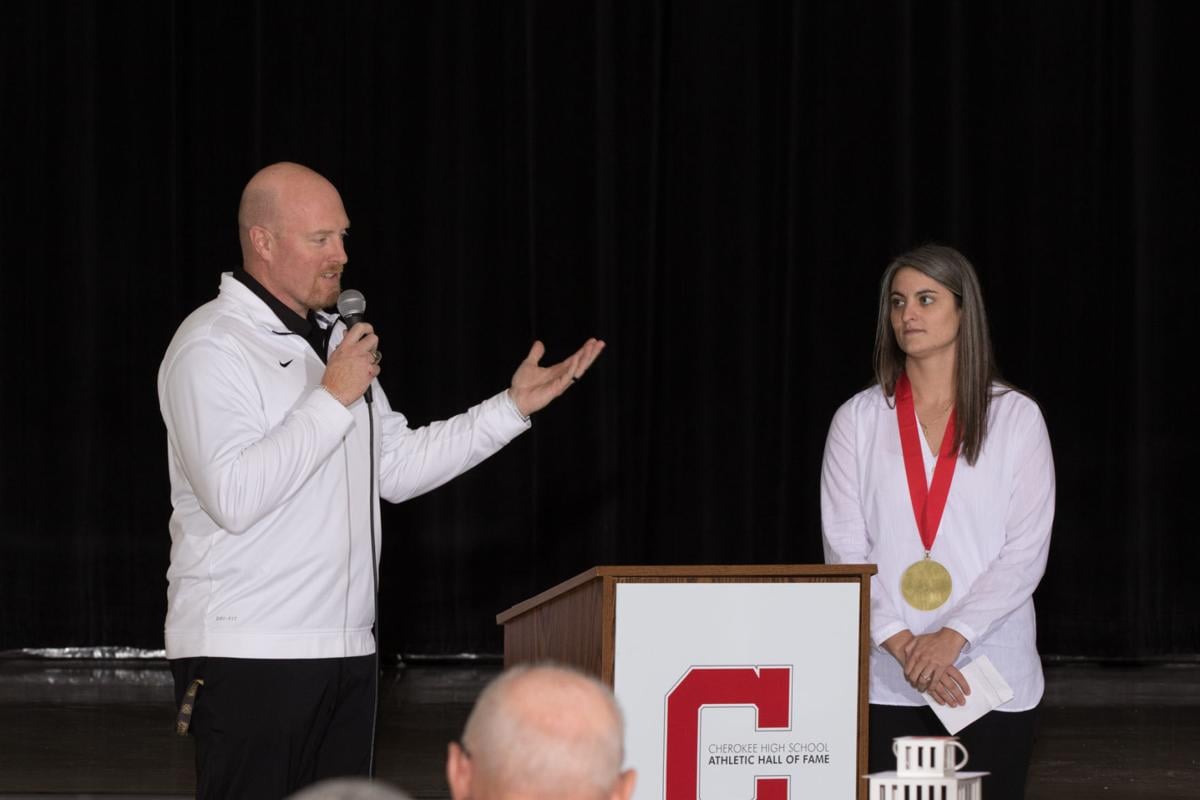 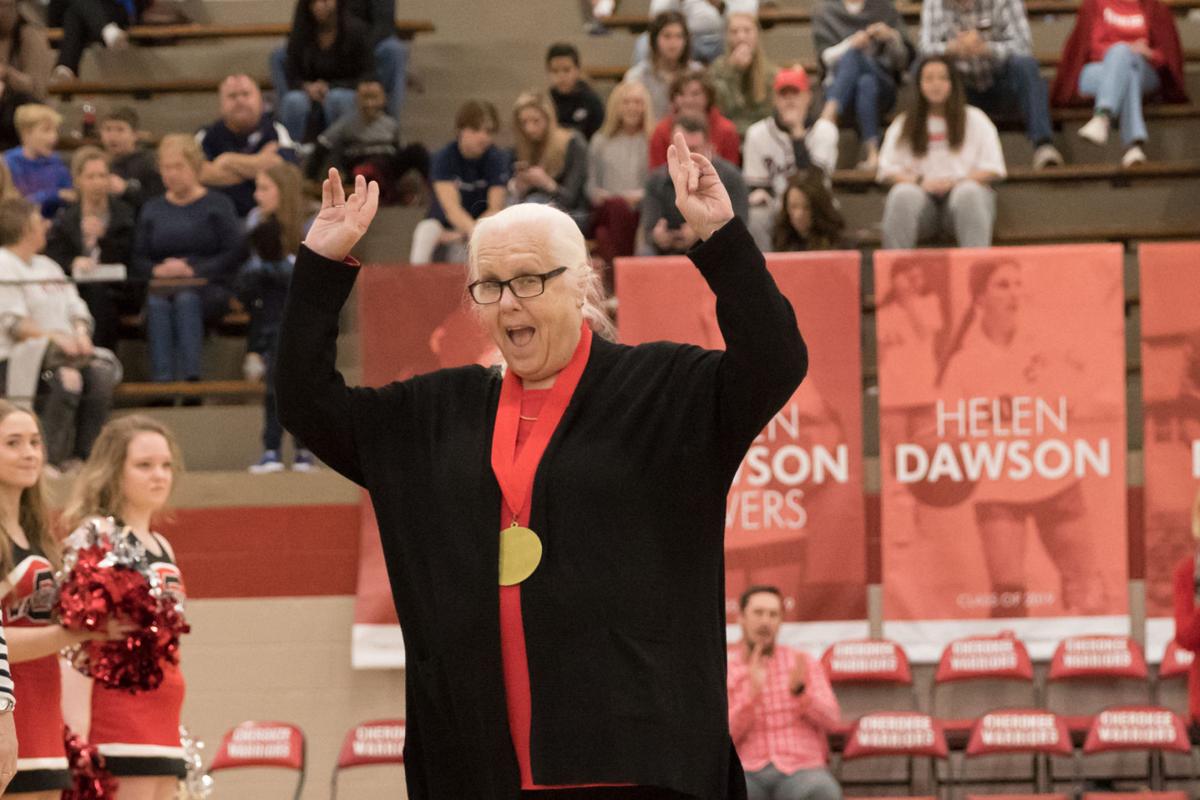 Helen Mauldin King celebrates during her recognition between basketball games on Saturday in Canton.

Cherokee 2007 graduate Sharon Swanson was speaks to the crowd during her induction into Cherokee's athletic Hall of Fame on Saturday in Canton.

Cherokee High School 1967 graduate Helen Mauldin King speaks to the crowd during her induction ceremony on Saturday in Canton.

Helen Mauldin King celebrates during her recognition between basketball games on Saturday in Canton.

One year ago, Cherokee County began what is now an annual tradition in selecting athletes from its past for induction into the school’s athletic Hall of Fame. Now in year two, the list of names hasn’t taken a drop-off in grandeur for Cherokee County’s oldest high school.

“We want it to be the elite of the elite,” Cherokee athletic director Jeremy Adams said. “That’s one thing I found out when I got here. History is something you either embrace or you kind of run from it, and I think that’s one of the best things we do here is embrace our history.”

Debbie Groover Buckner, Helen Dawson, Ellen Dawson Ewers, Jayson Foster, Helen Mauldin King, Tom Pharr and Sharon Swanson were the seven honorees at Saturday’s induction ceremony at the Cherokee North Cafe. With friends and families in attendance the honorees were each given an opportunity to speak to the crowd and share memories of competing for Cherokee High School. Tom Pharr was unable to attend the ceremony, but was honored for his accomplishments nonetheless.

Swanson, a 2007 graduate and current assistant coach with softball and basketball teams, was the youngest honoree on Saturday and her resume speaks for itself. Swanson was a four-time all-state selection in softball and a three-time all-state selection in basketball. In 2007 she was named the Cherokee Tribune Female Athlete of the Year and after graduation she went on to Kennesaw State where she played softball and would eventually be enshrined in the KSU Circle of Honor.

The significance of her inclusion on Saturday wasn’t lost on Swanson.

“This whole thing is so humbling,” Swanson said. “The history here is just incredible and to be apart of the second class is simply amazing. When I found out I couldn’t stop crying. It’s just incredible.”

Jayson Foster did not give a speech on Saturday, but for arguably the best football player in program history few words are needed. Foster graduated from Cherokee in 2003 and during his senior season the dynamic athlete rushed for 1,700 yards and passed for 700 yards while amassing 25 offensive touchdowns. He was the Cherokee County offensive Player of the Year and along with being named All-Region and All-State he helped lead the Warriors to the only region championship in program history.

After graduation, Foster made a name for himself on the national level at Georgia Southern University where he became the 2007 Walter Payton Player of the Year. When asked which game sticks out from his time playing on Tommy Baker Field he was quick to answer.

“I think the Sequoyah game my senior year,” Foster said. “They had just moved up to our region and we hadn’t played them in a while. It sold out and we beat them at home so that’s something I’ll always remember.”

Saturday’s honor was the cherry on top of Foster’s historic career.

“The closer it is to home, the more meaningful it is,” Foster said. “You have coaches here who change lives and this is where it all started. I’ll cherish this forever.”

Tom Pharr was another football great who was inducted on Saturday, although he was a multi-sport athlete who also competed in basketball and baseball for Cherokee in the early 1960s. Pharr went on to play quarterback at Mississippi State where he broke Steve Spurrier’s Southeastern Conference passing yardage record and beat out Archie Manning for first-team All-SEC honors in 1968. He went on to sign a professional contract with the Buffalo Bills.

The program with perhaps the most history at the school is girls basketball.

Saturday’s inductees from the Lady Warriors’ teams of the 1960s and 1970s — the Warriorettes as they were known at the time — included several women who help build a program which in many ways was ahead of its time.

“We would walk in the gym and they would have to stop the game in progress because there would be so much cheering the referees could not call the game,” King said. “That’s a true story. They would have to wait for us to get into the locker room before they could restart the game.”

King played for the Warriorettes in the late 1960s and was a member of the 1964 and 1967 state championship teams. During her senior season in 1966-67 she led the state in scoring at 28 points per game while helping lead the team to the state title.

“It was like Friday night football,” King said. “Everyone would come and stores would shut down. It was a very exciting time for Cherokee County.”

Behind King were the Dawson twins, Ellen and Helen, who helped lead the Warriorettes to the 1973 state championship. Both earned all-state honors in 1974 and 1975 and helped build upon a 107-game home winning streak and 26-straight playoff appearances for the program. In an era where many girls programs around the state were begging girls to come play, simply making the team at Cherokee was an accomplishment.

“When we went out and tried out for the ninth grade team in 1971 there were over 100 girls who showed up,” Ellen Dawson Ewers said. “Every game was broadcast live on the radio. It was a special time.”

Buckner played basketball and tennis for Cherokee from 1974-77 and helped lead Warriorettes basketball team to the 1976 state title. Her senior season at Cherokee she was a Parade Magazine All-American before going on to play at the University of Tennessee under legendary coach Pat Summitt where she averaged 12 points and nine rebounds per game, which were both program records at the time. She was named a member of the 1970s All-Decade team at Tennessee and also competed on the Junior National Team where she won a gold medal at the World University Games.

Adams said the first two classes will probably be the easiest simply due to the quality of nominees. Members of the Cherokee High School Hall of Fame committee vote on nominations each year and nominees are required to reach the 75% threshold in the voting in order to be inducted.

“We had about 18 names that were no doubters,” Adams said. “We’ll meet right after Christmas to start looking at names for next year.”

The six honorees in attendance were again recognized between the girls and boys varsity basketball games. Saturday’s games were played in Cherokee’s historic gym and the inductees were given special seating along the sideline. For King, in a gym filled with her own memories of scoring baskets and packed stands, watching this year’s Lady Warriors run up and down the court allowed her to see how far the game of girls basketball has come since the 1960s.

“I don’t know if I could run up and down like they do today,” King said. “But it was a big deal for Cherokee County when we played. When we would go to state all our fans would come and we would fill up the hotels and restaurants. We had our community behind us and we still do.”