The Latest: Phuket closes land and sea entry an…

AP FACT CHECK: Trump gets a reality check on co…

What to know about the coronavirus numbers in New York 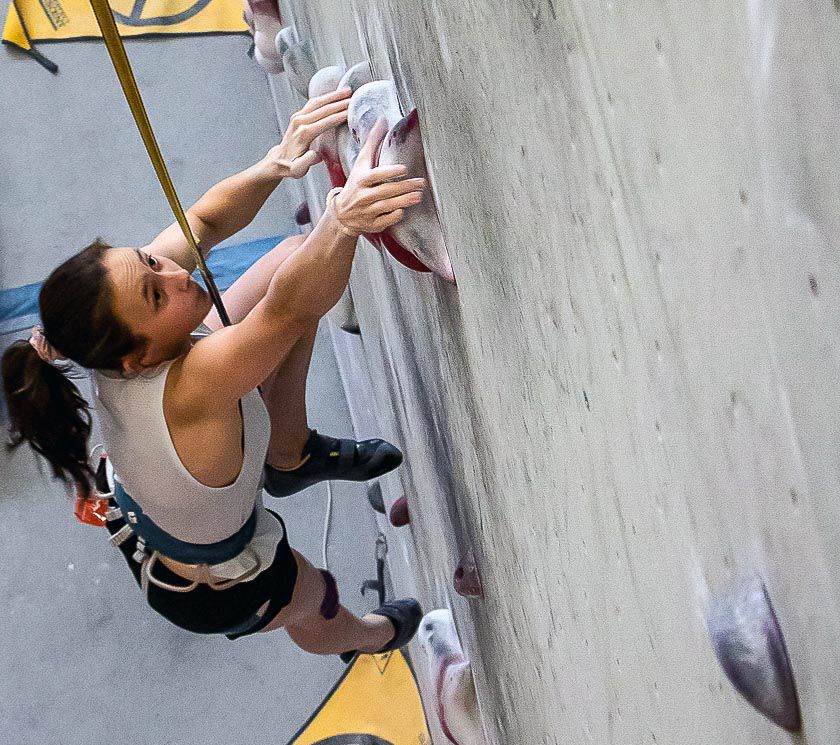 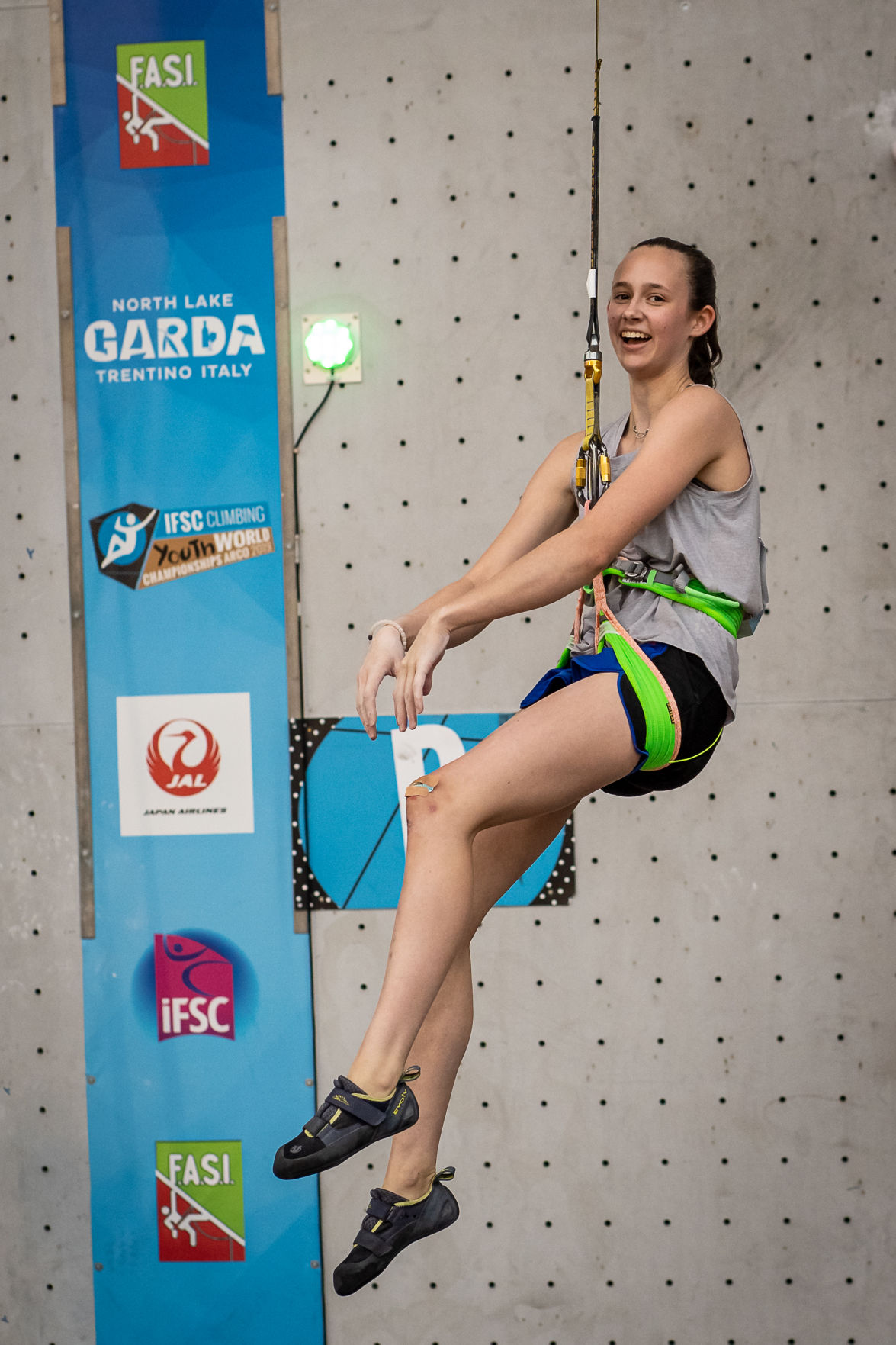 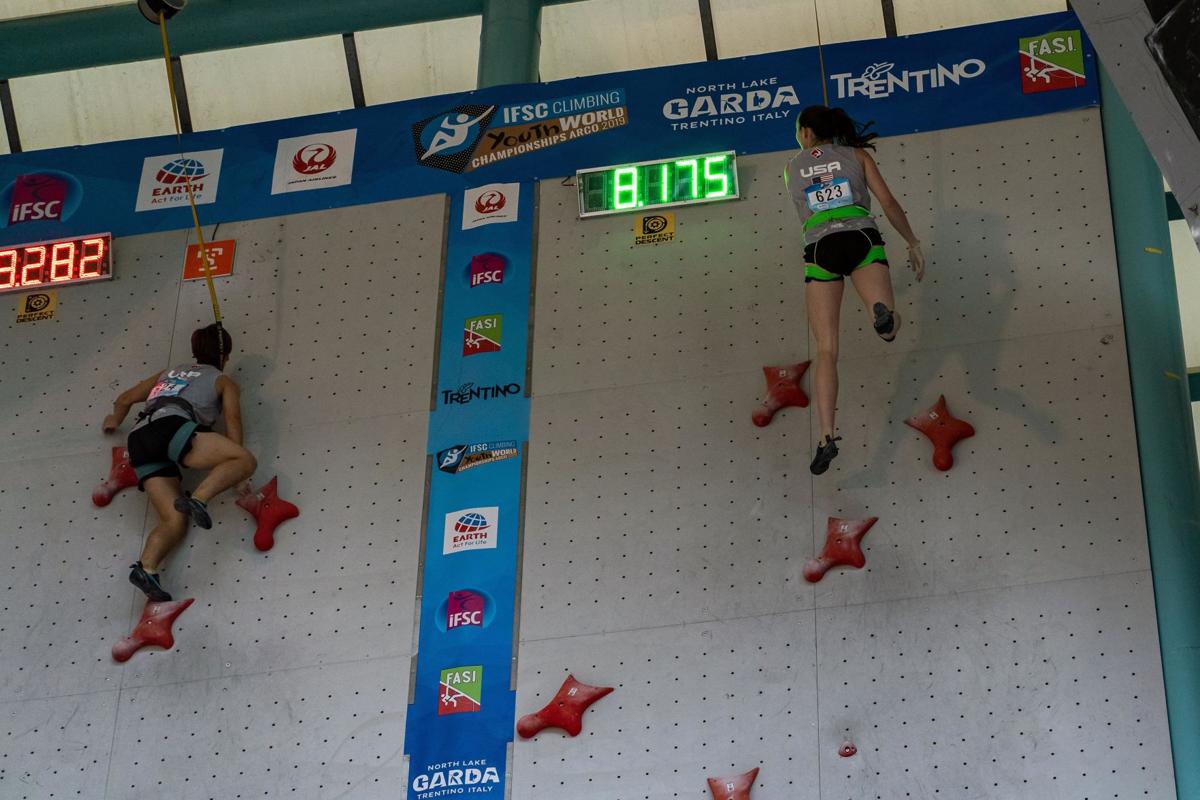 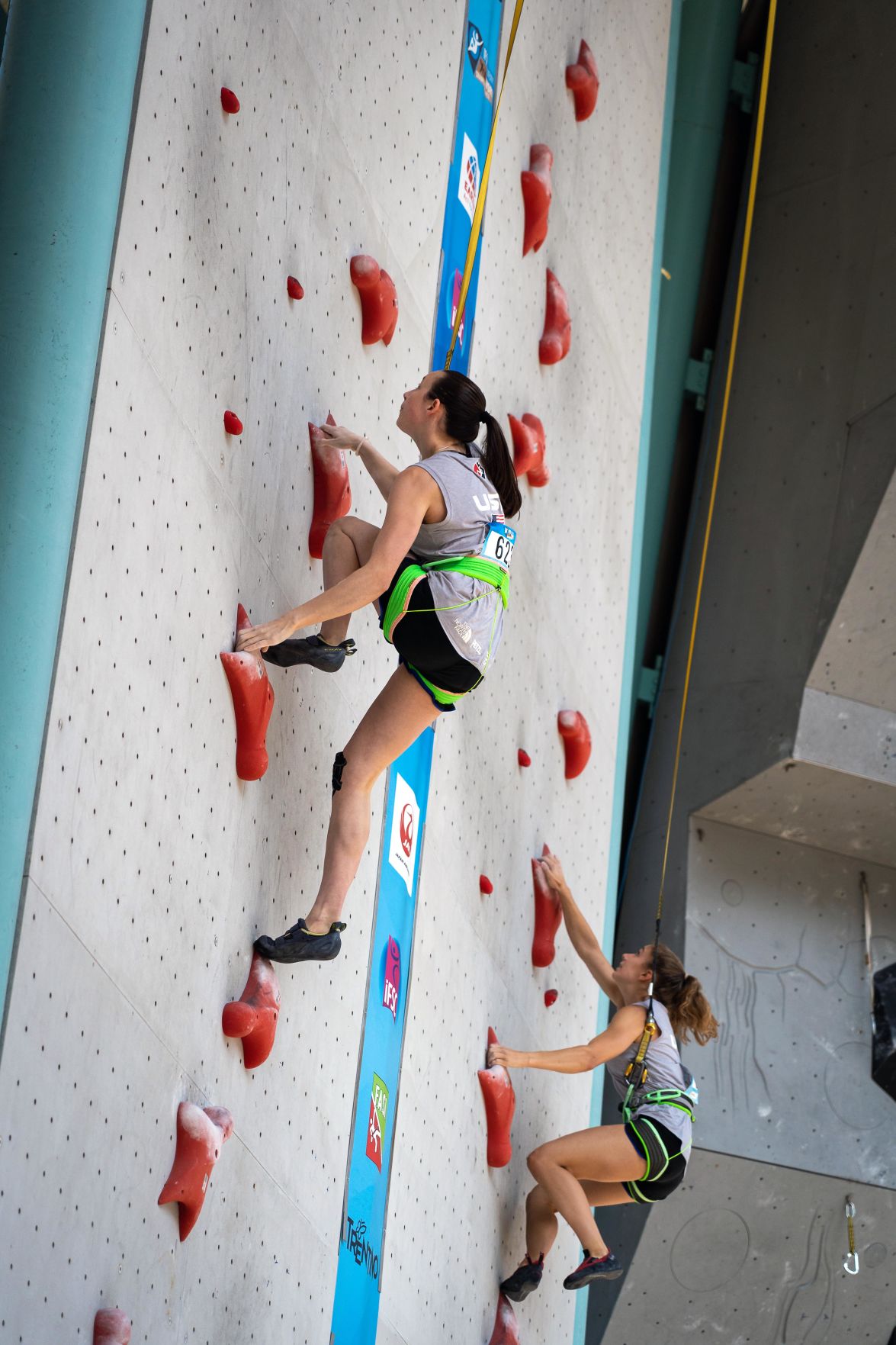 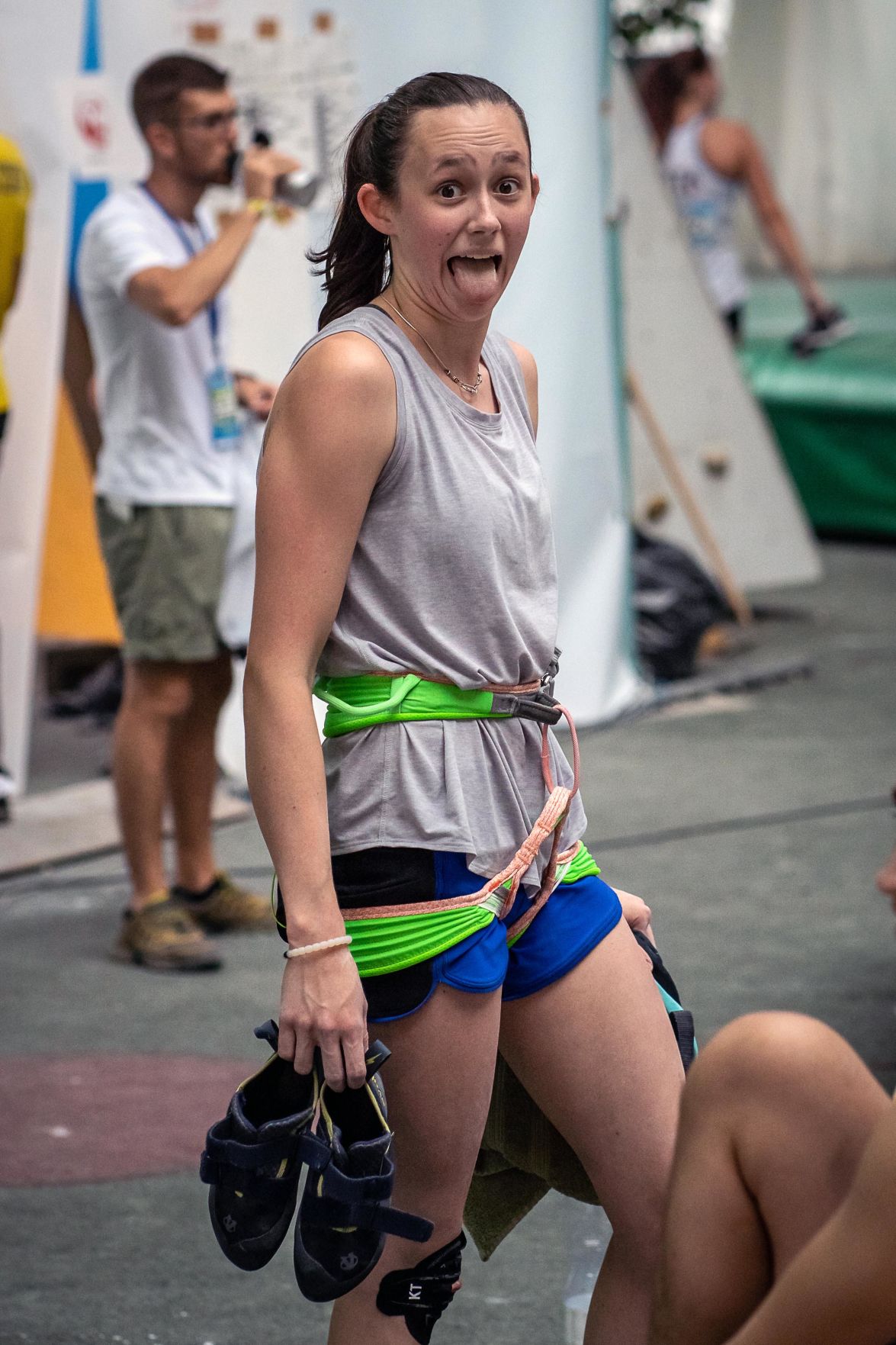 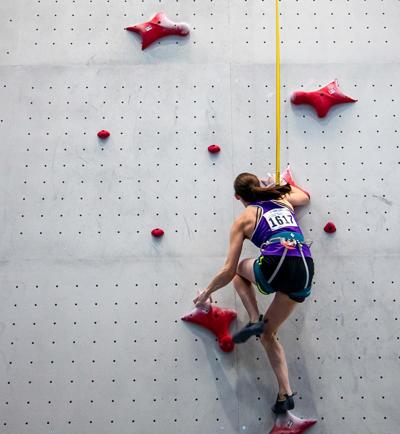 In the world of competitive speed climbing, the name Emma Hunt now travels well beyond Woodstock, Georgia, and even beyond the borders of the United States.

Hunt, a 16-year-old junior at Etowah High School, began rock climbing 12 years ago and in late 2017 she began her first season of competitive speed climbing. In less than two years, she was the best in the country and one of the best in the world.

“I tried other sports when I was little but none of them really took like climbing did,” Hunt said. “I don’t know what it was exactly, it was just really fun.”

Speed climbing is a specific discipline of rock climbing which requires athletes to scale a 15 meter wall as fast as possible. The current standardized wall and the placement of the official speed holds never changes and has been the same since it was approved by the International Federation of Sport Climbing in 2007. With speed being the name of the game, Hunt has found her niche.

This past August, in Arco, Italy, Hunt became the Youth A Speed Climbing World Champion by finishing first at the ISFC Youth World Championships with a time of 8.175. It was Hunt’s personal record and now stands as the official U.S. female record for all age groups. This past March, in Alexandria, Virginia, Hunt became the U.S. National Champion for Speed Climbers for all age groups by finishing first at the Open Sport and Speed National Championships.

“I did not expect that to happen,” Hunt said. “It was my first year I could even compete in an adult competition. I just went to get experience and I ended up winning. It was amazing.”

Hunt began climbing at an early age after her father took to the sport following a go on a rock climbing wall at a local Bass Pro Shops. The family began climbing as a recreational activity and it was the youngest of the group who took the hobby to new heights.

At 5 years old, Hunt began testing herself on smaller walls, bouldering as it’s called, and quickly took to the intricacies of the sport. She soon began trying out other types of climbing and four years ago attempted speed climbing for the first time. After joining the rock climbing team at Stone Summit Rock Climbing in Kennesaw, Hunt was introduced to a number of coaches who saw her potential.

Olexiy Shul’ga is Hunt’s speed coach at Stone Summit and works with the U.S. National team in that capacity as well. He said for her age, Hunt’s abilities are extraordinary.

“As an athlete she has great potential,” Shul’ga said. “She has amazing reaction and she can collect her energy and bring it to the wall. She understands what is happening too. In climbing, experience is important, but with Emma I was surprised because within a year she got second fastest time in the country.”

With her performance in Virginia this past May, Hunt became one of four women on the U.S. National Speed Climbing team. The 2020 Olympics in Tokyo will be the first-ever to include sport climbing, and while Hunt will not be traveling to Japan next summer as apart of Team USA, USA Climbing manager and coach Meg Coyne said it wouldn’t be out of the question in her future.

“For the 2024 Olympics she’s right on track,” Coyne said. “Right now we have an overall team for adults and an overall team for youth. She’s on both. She’s on the national team, but we don’t require our athletes to move to Salt Lake. She’s in a good spot right now, because there aren’t many youth programs in the U.S. with a dedicated youth speed team and dedicated speed coach. What Stone Summit has with those resources is unusual.”

Hunt is taking an accelerated academic track at Etowah, and will complete both her junior and senior year curriculum during this academic year. She will graduate in May and plans to continue her passion for climbing, although she’s not quite sure what that will look like as of yet.

Jennifer Hunt, Emma’s mother, said when the family began climbing she never anticipated where it would lead both her daughter and the family. Hunt has competed in Italy, Russia and China as a result of her climbing abilities and there’s no telling where her journey will take her next.

“We were never those parents that pushed their kids to try to earn a sports scholarship and I never thought, ‘Maybe we’ll go to Moscow one day,’ but there we were,” Jennifer Hunt said. “The climbing community is unlike any other community because they are so open and accepting whether you’re just a mom like me or some youth phenom. Everyone just wants to see everyone succeed and we just fell in love with it.

Hunt said she recognizes speed climbing is her strong suit but she wants to be good at all three disciplines of the sport, including lead climbing and bouldering. Coyne said Hunt’s blend of malleability and obedience has made her a very quick learner with a perfect amount of stubbornness, self-thought and determination.

“She’s a lovely little spirit,” Coyne said. “Emma is unique for sure. She’s giggly, positive and extroverted but surprisingly reserved about herself. You probably wouldn’t get much out of her in an interview.”

Hunt landed in San Francisco on Friday to compete in a USA Climbing Cup bouldering competition this weekend. She will compete in the Youth Bouldering Regionals this December in Augusta and at the USA Climbing Combined Invitational in January in Plano, Texas. Training camps with USA Climbing in Salt Lake City will be sprinkled into her busy schedule as well.

She doesn’t hide her dream of one day competing at the Olympics but said the sport itself gives her plenty of daily challenges to keep her busy while working on that dream. Problem solving is a large portion of climbing and for Hunt it’s what keeps bringing her back to the wall.

“I don’t really have a favorite discipline, they all propose a different challenge,” Hunt said. “I like the challenge it presents. It’s addicting for me and once I get going, I can’t stop.”