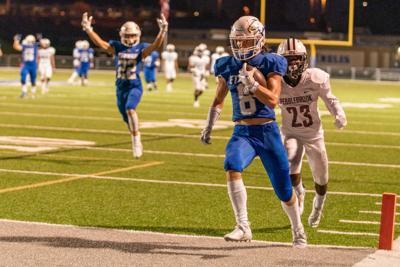 Etowah will host Lassiter on Friday in a battle between two teams on the opposite ends of Region 4AAAAAAA.

Etowah (4-4, 2-1) is coming off a bye week and boasts the best scoring offense in the region at 27.7 points per game. Senior quarterback Dalton Miller leads Cherokee County with 1,951 passing yards and 17 touchdowns, while Jackson Manns and Brock Rechsteiner have combined for 72 receptions for 1,134 yards and 12 touchdowns.

Etowah has traditionally been known for its power run game, and while the team does have three running backs who have totaled 892 yards and 10 touchdowns, there has been a more air-it-out type feel with the Eagles this season.

“I was very fortunate to hire a couple really good coaches on the offensive side,” Etowah coach Dave Svehla said. “This is my 21st year coaching, and we’ve always run the ball. Teams would describe us as a power run game, and we still are, but we’re certainly calling more passing plays this season.”

Etowah lost at home to Walton two weeks ago and should be motivated with its playoff destiny still firmly in reach. A win over Lassiter would set up a game next week with Roswell for a possible region championship.

“I thought, overall, the Walton game was the best our offensive line has played all year,” Svehla said. “I think, defensively, we need to shore a few things up if we’re going to have success. You can look ahead at all the possible tiebreaker scenarios, but we’ve got to beat Lassiter on Friday, and that’s what we’re focusing on.”

Lassiter has struggled to score all season, averaging only 5.3 points per game. The Trojans lost 24-7 last week at Woodstock, and their lone win came in a 7-0 victory over winless Kennesaw Mountain.

In seven of Lassiter's eight games, it has been held without an offensive touchdown.

Senior safety Jack Ferguson, among the Cobb County's leading tacklers, will have his hands full keeping the explosive Etowah passing kept in check.

Etowah’s defensive backs may be presented with chances to make plays Friday as Lassiter has thrown 17 interceptions this season.

Svehla said the extra week of rest should benefit Etowah before the final two weeks of the regular season.

“We went pretty light last week with contact,” Svehla said. “Every team at this point has kids that are dinged-up. We started on Lassiter right away and got some extra time to work on some mental stuff. We were able to look at the film and did our best to shore up those things we need to improve.”