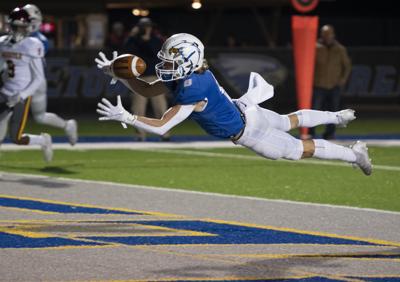 This final week matchup between two playoff bound teams could reveal a snapshot of each team’s form heading into the postseason.

Etowah needs a win plus a Walton loss to Woodstock to claim the region title, however a win for Etowah would give the Eagles a home game in the first round of the playoffs regardless of any other results.

“In terms of preparation I don’t think you can deviate from what you’ve been doing all season but in terms of the gravity of the game, yeah it’s a big one,” Etowah coach Dave Svehla said. “I’m glad we’re playing a very high quality team because that’s what it will be like in the playoffs.”

The matchup between Etowah’s offense and Roswell’s defense should be worth the price of admission. The Eagles’ offense boasts Cherokee County’s leading passer, Dalton Miller, who has 2,152 yards and 21 touchdowns this season, along with a number of weapons surrounding Miller.

Jackson Manns and Brock Rechstiener have combined for 1,250 yard and 15 touchdowns on 78 receptions while the three-headed trio of Nick Maddox, Klivery Many and Remington Adams has combined for 991 rushing yards and 11 rushing touchdowns.

Roswell’s defense has been one of the best in the state, allowing 9.5 points per game and recording three shutouts so far this season. A number of Division 1 players line up for the Hornets on both sides of the ball including North Carolina commits John Copenhaver and Trey Zimmerman on offense along with Arizona State commit Donieko Slaughter on defense.

“The Roswell defense, I think is the second best defense in the state of Georgia in terms of points allowed,” Svehla said. “We recognize we’re facing a challenge but if we can score a few points and move the chains that’s really all you can ask. Our defense is going to have to play well.”

The Hornets’ offense is averaging slightly more points per game than Etowah (29.5) and whether Etowah can slow down the power run game of Roswell may be the key to the entire contest. Nnamdi Orjioke and Savion McCrary have been the two lead backs for Roswell this year but Copenhaver has been featured frequently in the run game over the past few weeks.

“That kid a stud,” Svehla said of Copenhaver. “I think they know he’s one of their best players so they’ve created situations where they can get the ball in his hands. It creates a different dynamic for their team.”