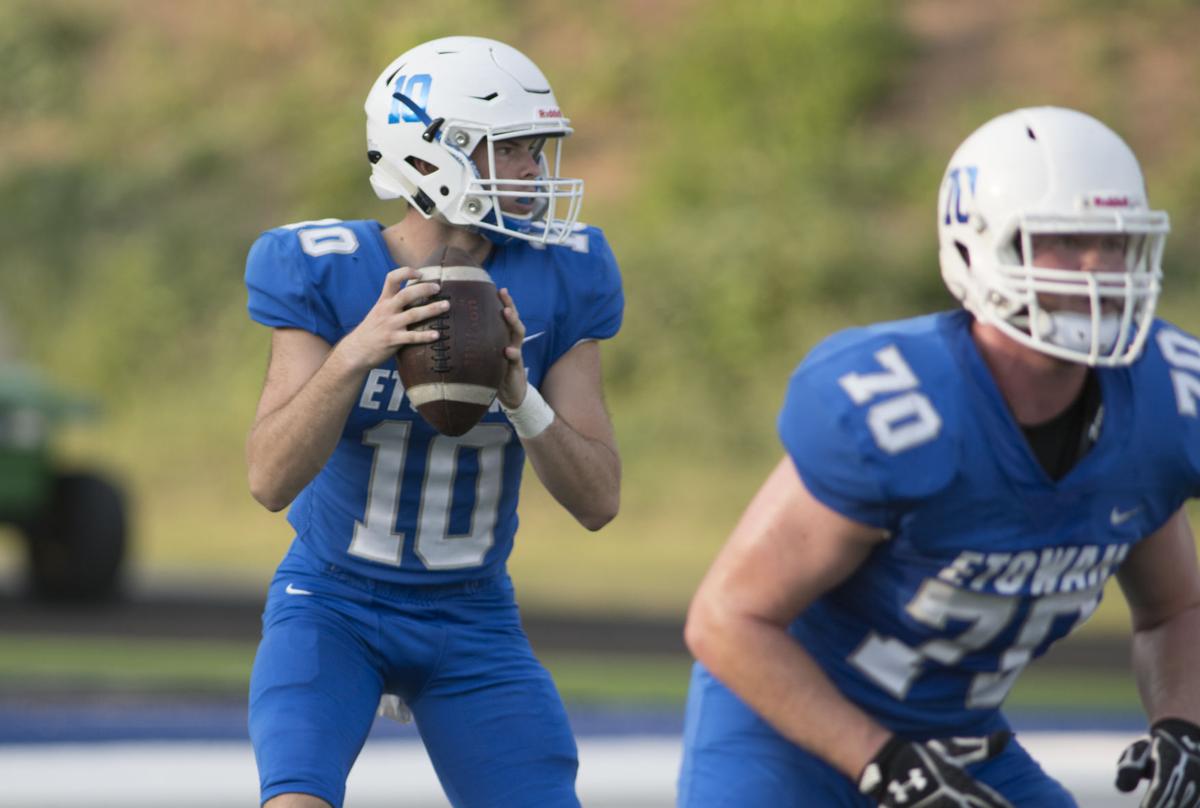 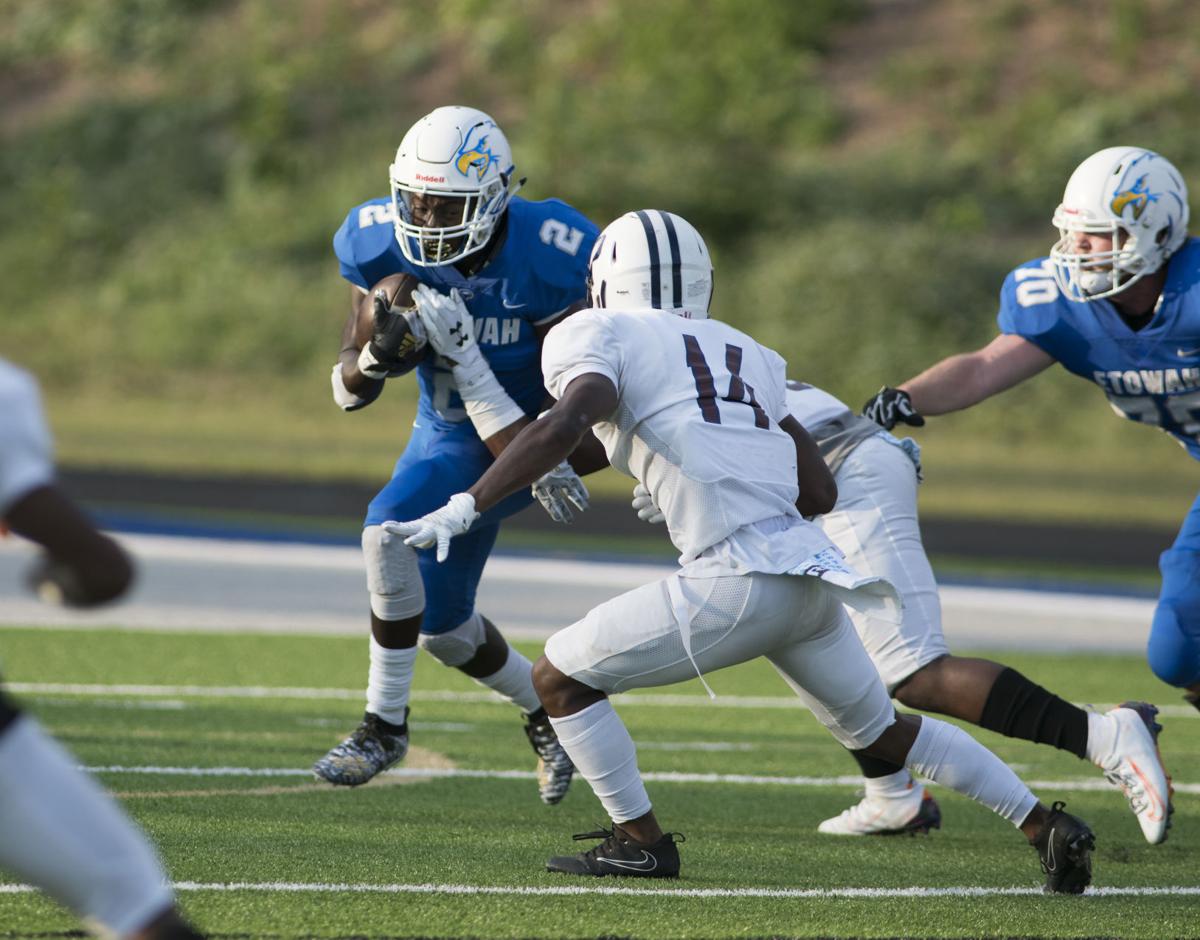 Anthony StalcupEtowah’s Nick Maddox runs the ball in Saturday night’s game against Pebblebrook. Maddox finished with 16 carries for 74 yards and two touchdowns, both of which came in the fourth quarter. 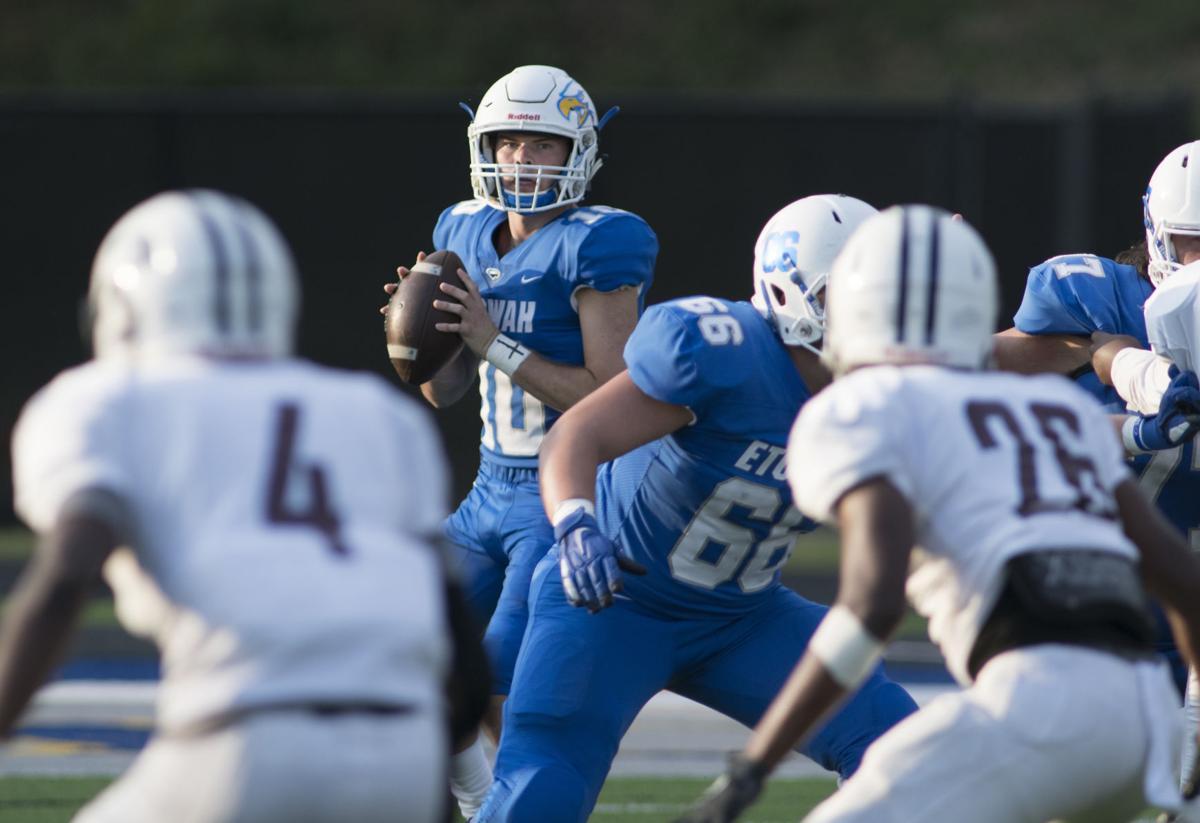 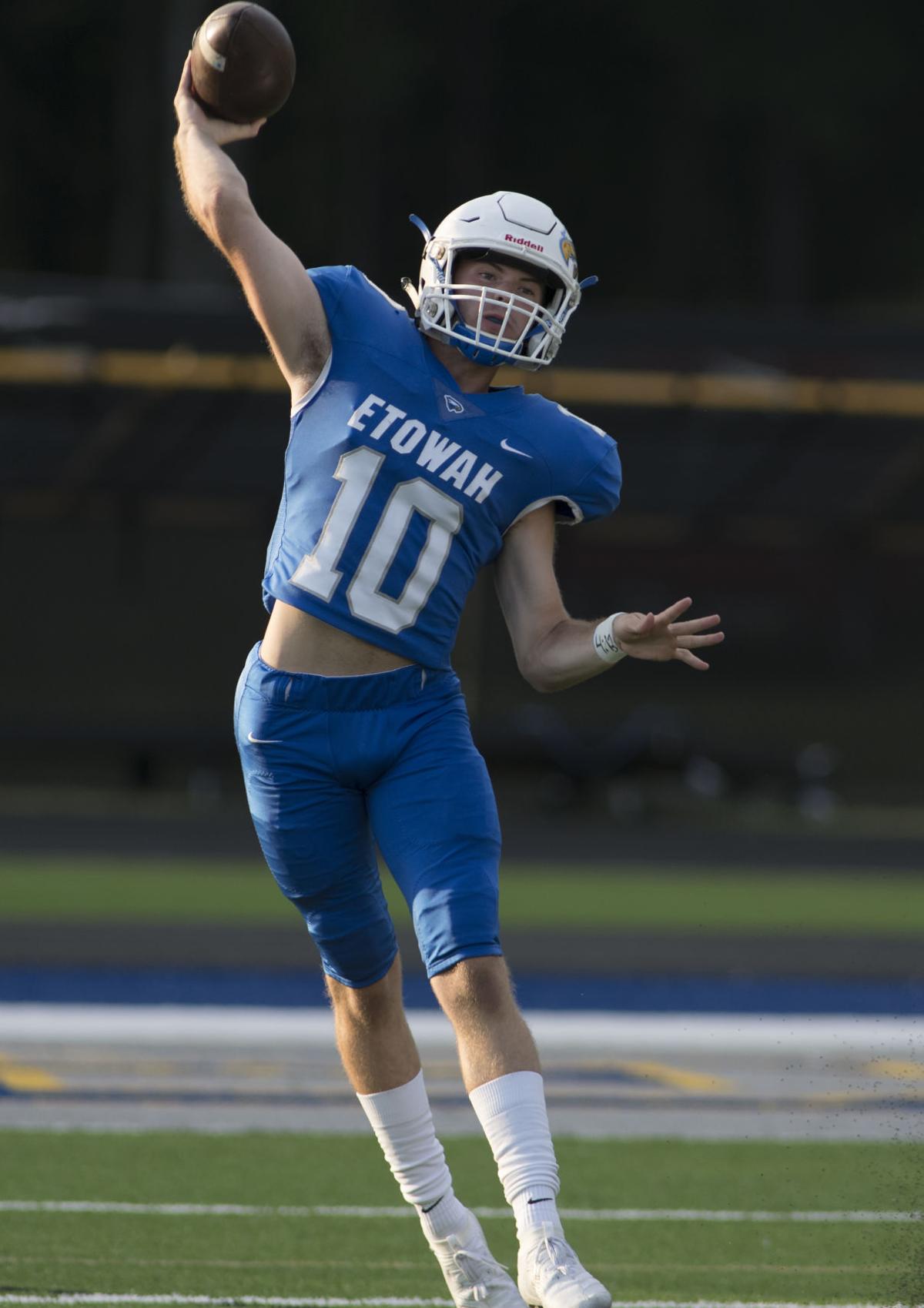 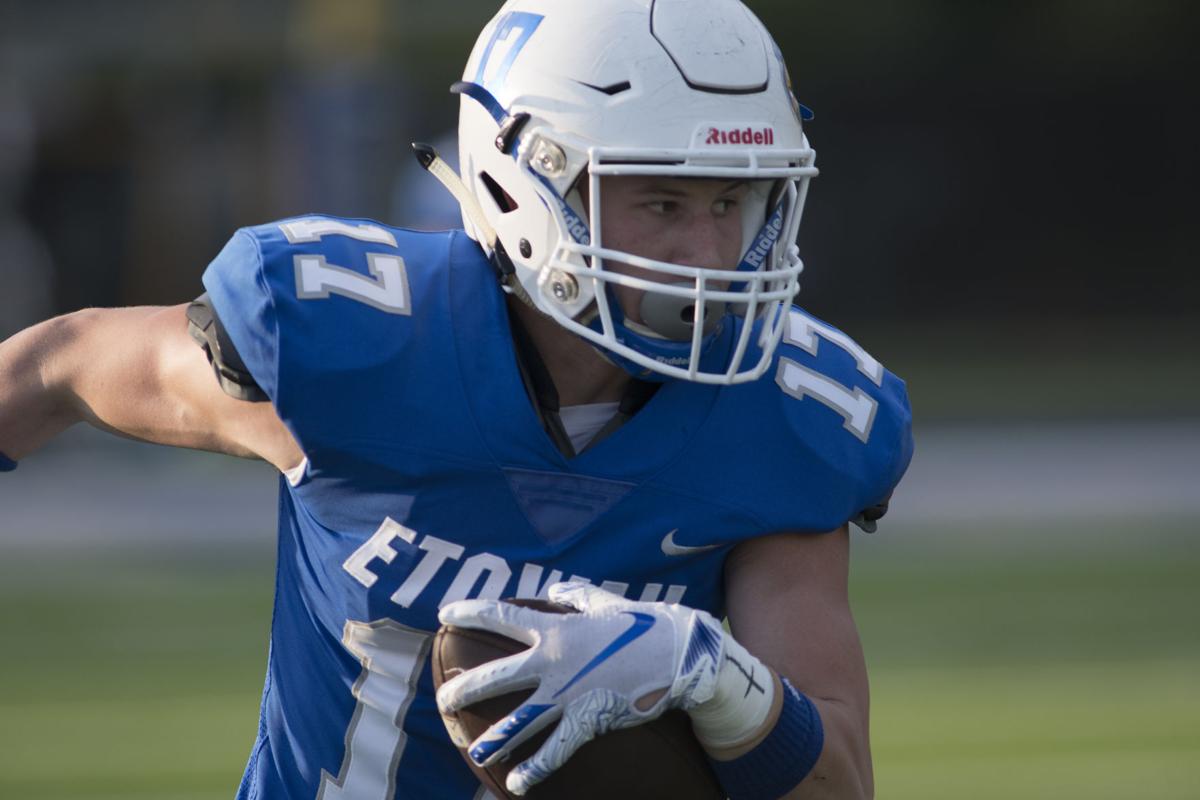 Anthony StalcupEtowah’s Nick Maddox runs the ball in Saturday night’s game against Pebblebrook. Maddox finished with 16 carries for 74 yards and two touchdowns, both of which came in the fourth quarter.

WOODSTOCK — After two straight losses where Etowah coach Dave Svehla had pointed to turnovers as a primary concern, the Eagles took care of the ball Saturday night and broke away for their biggest offensive output of the season.

Etowah beat Pebblebrook 45-32 at Eagle Mountain, in what was one of many games throughout the area postponed and rescheduled following Friday night’s storms.

After waiting more than two hours Friday night before deciding to postpone the game, the teams had to endure another 30-minute lightning delay prior to Saturday’s scheduled 6 p.m. kickoff. Once play finally began, the teams looked as if there was never a delay at all.

“I’m glad we didn’t play last night, because our kids were so jacked-up at kickoff, and once it got to be about 9:30, they were just laying around,” Svehla said. “I thought our kids did a good job of coming back today and having pretty good energy. We made it real clear we weren’t going to overdo the pregame today because we had them here so late last night, and I think it worked pretty well.”

Etowah (2-2) finished with 515 yards of total offense and did not punt the entire game. Quarterback Dalton Miller was 19-for-26 passing for 336 yards and three touchdowns, while adding 52 yards and a touchdown on the ground.

The Eagles scored in every quarter and were forced to continue to score in the second half when Pebblebrook’s offense came alive as well.

“It was a shootout. I mean, they’re fun,” Miller said. “As a quarterback, I always love an offensive shootout. I think we’re starting click on offense, and it’s fun because, literally at every position, we have so much depth. When (Pebblebrook) kept scoring, we knew we just had to come back out and score one more.”

Miller connected with Jackson Manns late in the second quarter for a 61-yard touchdown pass, which gave Etowah a 24-12 lead. Manns finished with a team-high eight receptions for 149 yards and two touchdowns.

Pebblebrook (1-2) answered just before halftime when Naquay Lett found Jaquez Coleman for a 60-yard touchdown pass. Lett finished 14-of-18 passing for 247 yards with four touchdowns, while Coleman finished with five receptions for a game-high 150 yards with two scores.

It seemed every time Etowah scored to possibly put the game away, Pebblebrook would answer.

“We just knew we had to keep scoring,” Etowah offensive lineman Porfirio Acosta said. “We trust our skill guys are going to make those plays when we need them.”

Miller connected with Manns for a touchdown again in the third quarter, and Lett found Coleman for another score as well. Etowah’s ground game proved to be the difference, however, as the Eagles were able to establish the duo of Nick Maddox and Klivery Many.

Maddox finished with 16 carries for 74 yards and two touchdowns, while Many ended the game with 53 yards on 11 carries. Both of Maddox’s touchdowns came in the fourth quarter, and his second touchdown with a little more than 4 minutes left proved to be the final score of the game.

“It was tough tonight,” Maddox said. “I just had to tell myself the team was counting on me and I had to get it in. We’re a brotherhood and we have a lot of guys who can score and whoever gets in I’m happy for them.”

Pebblebrook, which finished with 417 yards of total offense, cut Etowah’s lead to 38-32 midway through the fourth quarter when Jaquavious Jones barreled in from 3 yards out for a touchdown.

Jones then converted the team’s only 2-point conversion in the game, but Maddox and Klivert were able to put the game away on the ground in the final minutes.

Svehla was happy with the win, but he cautioned that there is always room for improvement.

“I thought we were resilient,” he said. “Defensively, our players were in position to make plays on long passes, and we didn’t make some of them. We’re excited to win, but I think, if we finish better defensively, that’s a completely different game. But credit to Pebblebrook because they’ve got some kids who made us miss, broke some tackles and made some big catches.

“But I thought we answered the bell every time offensively and that was probably the thing I was most pleased about. Every time they answered and we needed to score again, our kids didn’t blink and that was really pleasing to see.”

Etowah will travel to Hilgrove next Friday, while Pebblebrook will play at home against Lithonia.