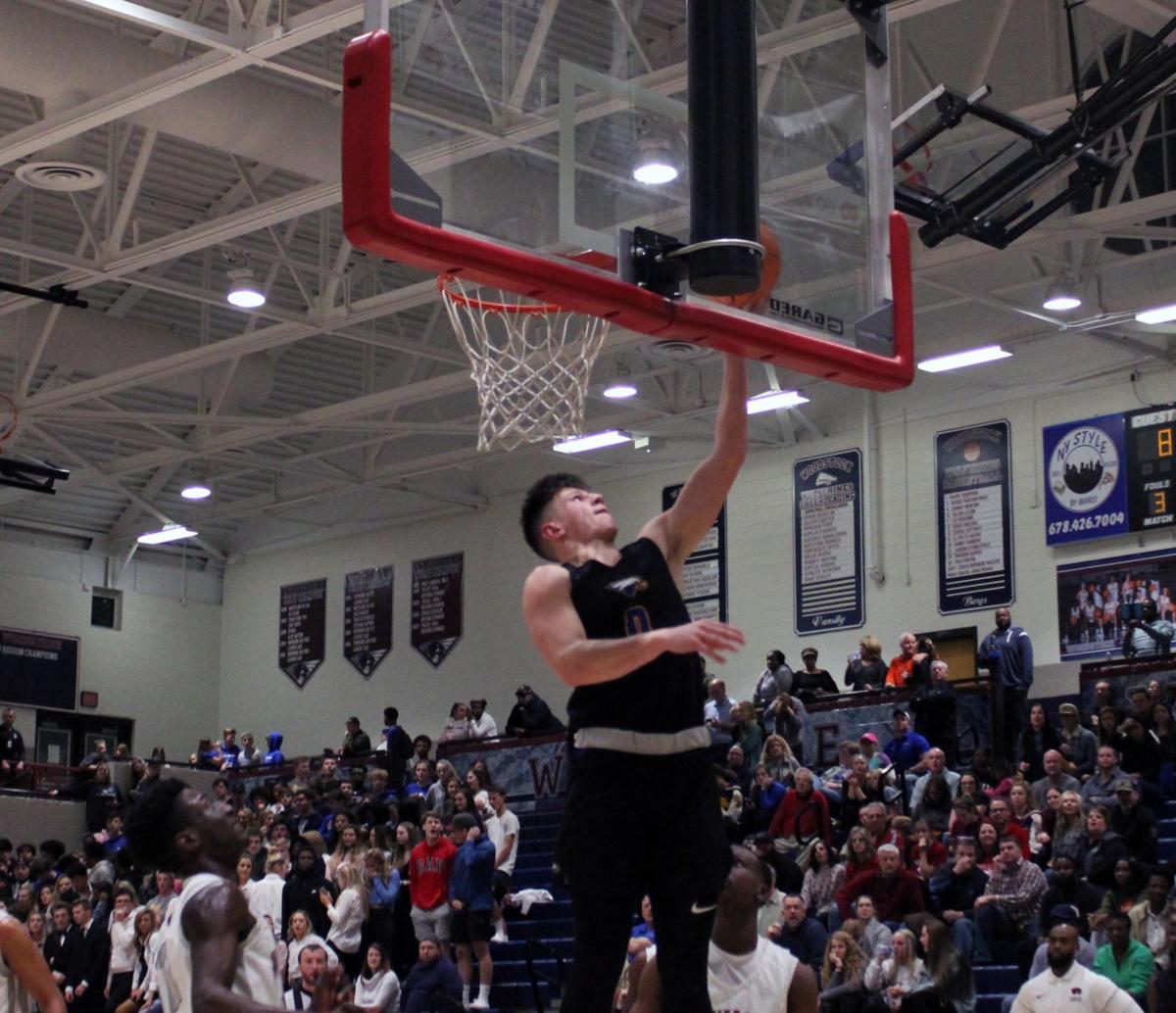 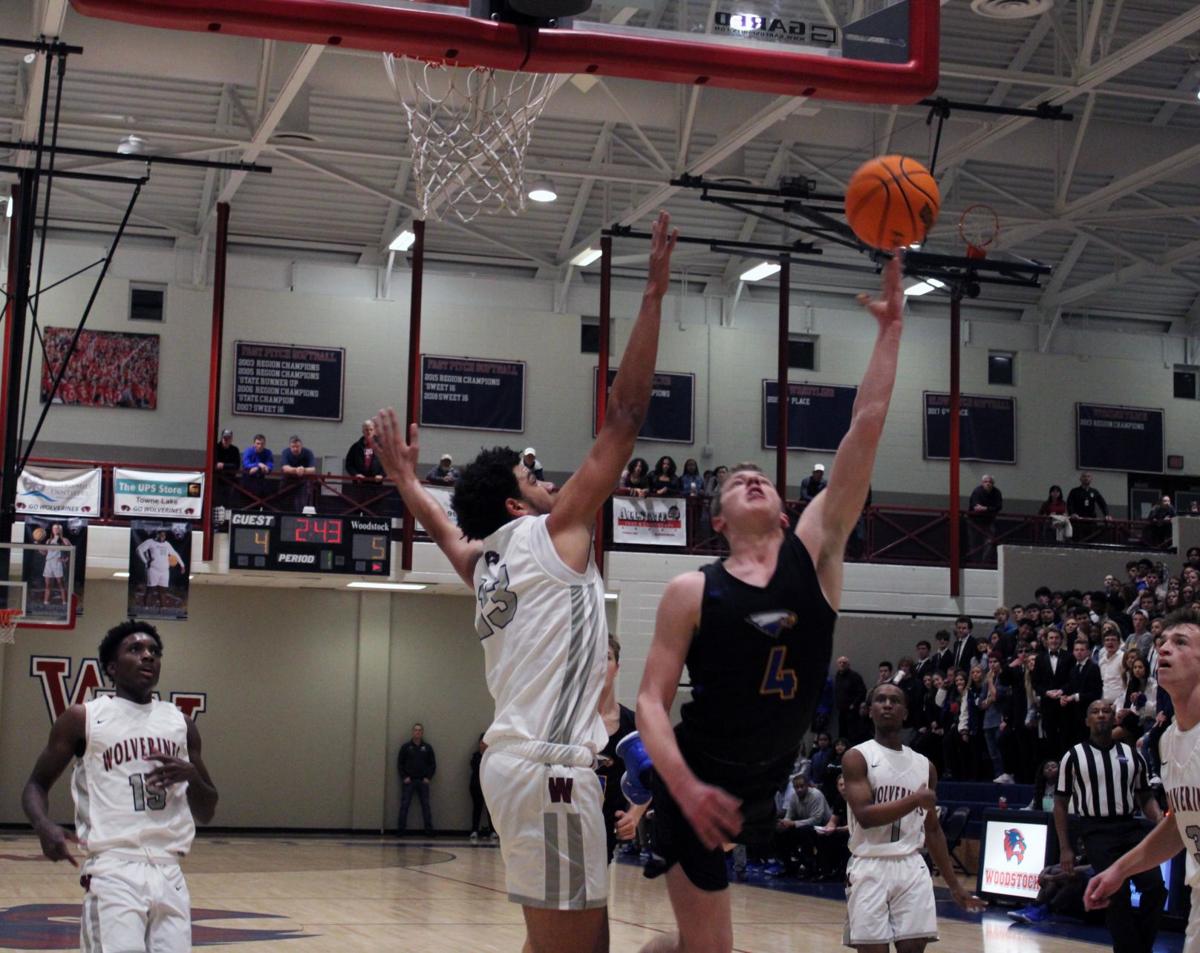 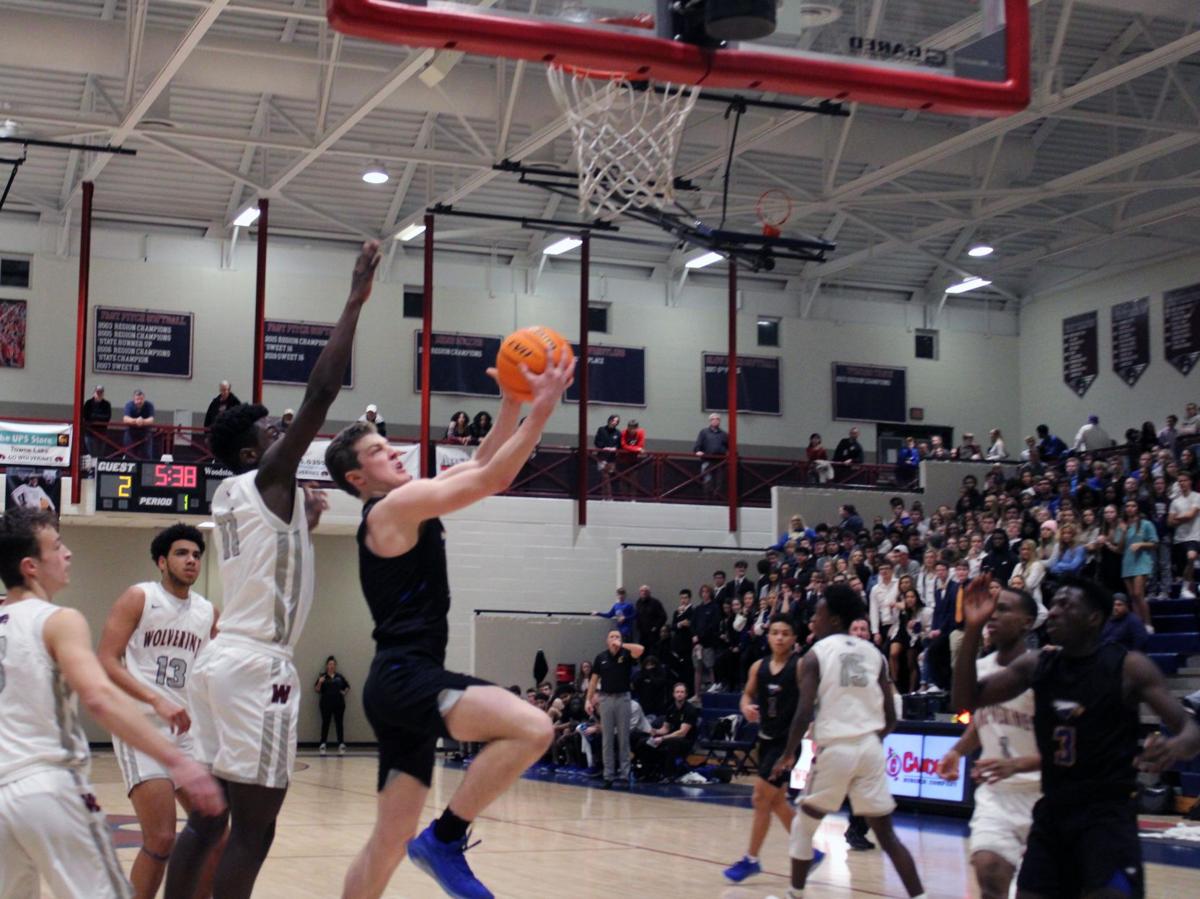 Etowah senior Will Garvey drives toward the basket during Friday night's game at Woodstock. 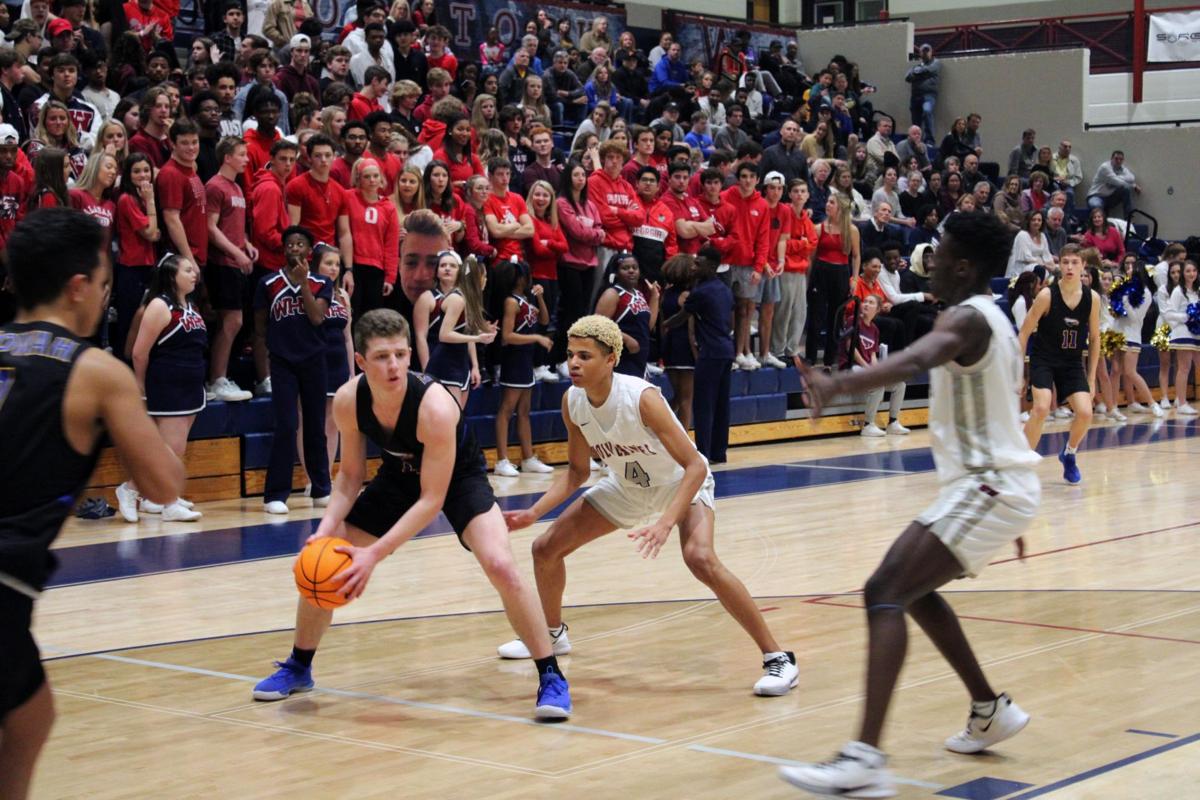 Etowah’s Will Garvey is corned by Woodstock’s Jahnay Newton (4) and Leo Mesumbe (11) during the second half in Woodstock Friday night. 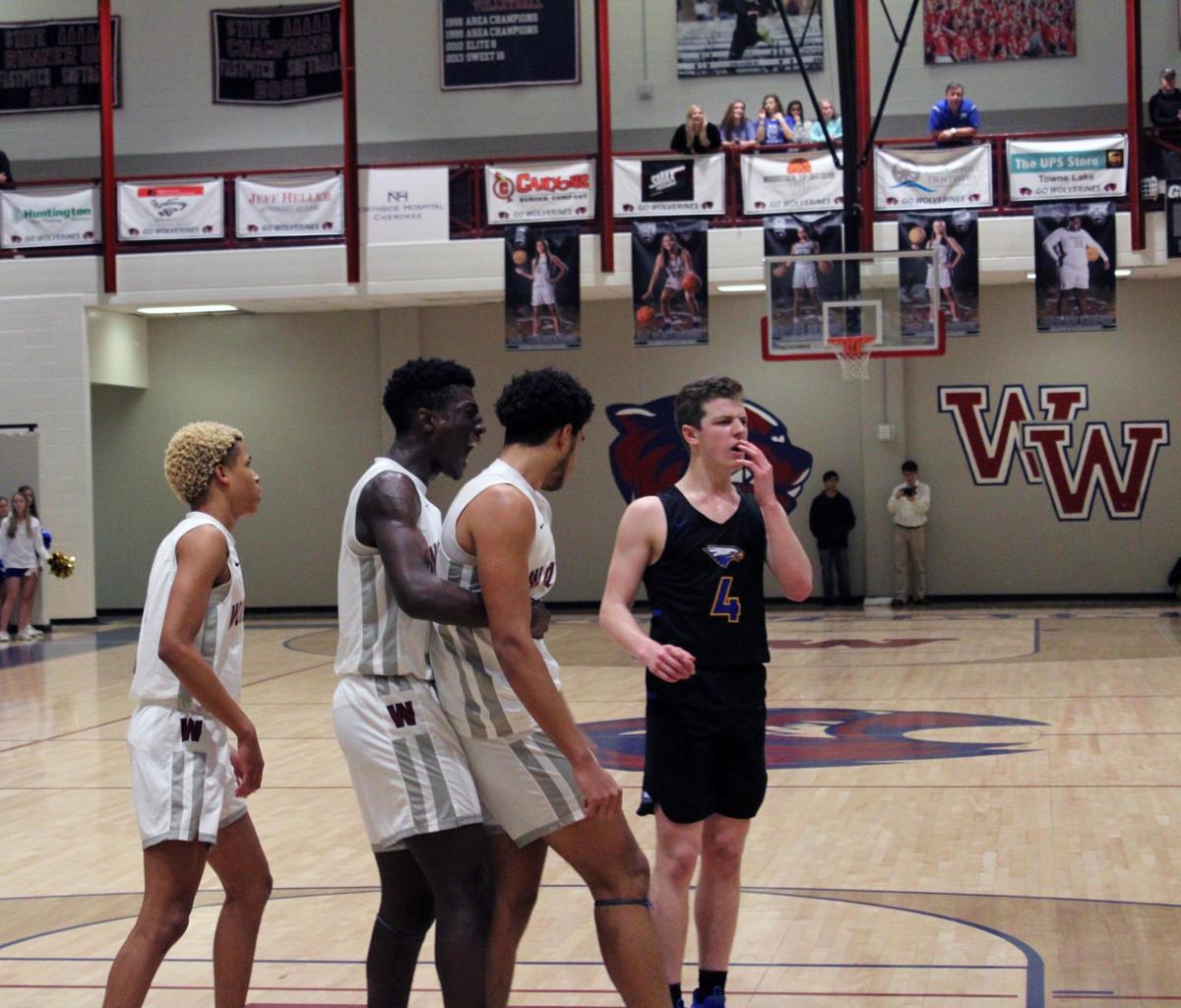 Etowah senior Will Garvey drives toward the basket during Friday night's game at Woodstock.

Etowah’s Will Garvey is corned by Woodstock’s Jahnay Newton (4) and Leo Mesumbe (11) during the second half in Woodstock Friday night.

WOODSTOCK — Etowah swept the regular season series over its rival Woodstock on Friday night and showed why any team hoping to claim this year’s Region 4AAAAAAA championship will likely have to go through the Eagles to get there.

Using a combination of high percentage shots on offense and unrelenting defense, the Eagles pulled away from the Wolverines in the second quarter and never looked back on the way to 60-42 win on the road. The win kept Etowah (17-5, 8-1) atop the region Region 4 standings while Woodstock (11-12, 3-6) fell to fifth place in the six-team region.

“High school basketball is about memories,” Etowah coach Jason Dasinger said. “Our kids were probably picked fourth or fifth in the region before the season. Everyone doubted them. So yeah, when you beat your rival by 20 at their place you deserve to celebrate.”

Woodstock’s Brodie Marcinkowski sunk a 3-pointer minutes into the first quarter, giving Woodstock a 5-4 lead but it would be the only lead of the game for the Wolverines. Etowah closed out a low-scoring first quarter on a 6-0 run and led 10-5 at the start of the second.

Although he began the game on the bench, Etowah junior Brock Rechsteiner was the most explosive scorer in Friday night’s game and finished with a game-high 26 points. Using strength and skill, Rechsteiner finished multiple times through contact at the rim and also knocked down three 3-pointers while helping lead the Eagles to victory.

The combination of Rechsteiner and senior Will Garvey helped spark Etowah to a 19-7 second quarter run. The Eagles routinely found high percentage shots at the rim while Woodstock was forced into shooting jump shots, which were not falling.

Etowah getting good looks the whole first half. Eagles out scored Woodstock 19-7in the second quarter.At the half@EtowahHoops 29@WoodstockBball 12 pic.twitter.com/DLkRfvFlxe

Garvey controlled the pace of the game from the first quarter until the final minutes of the fourth. Garvey finished with 17 points, including multiple acrobatic finishes at the rim, but it was his decision making which seemed to quell any attempted come back by Woodstock.

Woodstock made it’s run in the third quarter with a halftime adjustment to move to a full court pressure defense. The defensive shift seemed to work, as Woodstock went on a 13-2 run to open the quarter. Etowah turned the ball over multiple times in the backcourt, leading to easy buckets for the Wolverines and forcing Dasinger to call a timeout.

“I told my guys in that timeout I did a terrible job coaching them in that third quarter,” Dasinger said. “I told them I’m going to let them go win it and when I get out of the way they go win basketball games. They won it, not me.”

Back-to-back 3-point plays by Rechsteiner halted the Woodstock run and were followed by baskets from Colby Flaig and Garvey. Woodstock cut the lead to 31-25 with its run, but Garvey finished on a drive to the basket to end the third quarter and Etowah took a 41-25 lead into the fourth.

Woodstock made a bit of a push in the 3rd but Etowah responded in full.Will Garvey finishes at the rim to close out the period.End of the third.@EtowahHoops 41@WoodstockBball 25 pic.twitter.com/YGEeIx7sna

“We got beat in every facet of the game,” Woodstock coach Josh Pierce said. “When we had an opportunity in the second half being in the bonus we were still shooting jump shots. We turned into a jump shooting team and it was working.

“We did a little bit better in the third quarter cutting the lead to six, but we were calling plays in the second half for us to attack the basket and we were still settling for jump shots.”

Rakim Thompson led Woodstock with 12 points but throughout the game the Wolverines had trouble finding consistent offense against Etowah’s defense. The Eagles’ held Woodstock to its third-lowest scoring output of the season and for the year Etowah is surrendering an average of 49.6 points per game, the best average in the region.

“We get enjoyment out of making people work to beat us,” Dasinger said. “The one good thing about this team is that they bring the same effort every night. We’ve struggled to shoot over the last few games but I feel good about where we are because when you’re holding teams to 40 points a game and then you start to shoot a little better, that can be pretty tough to beat.”