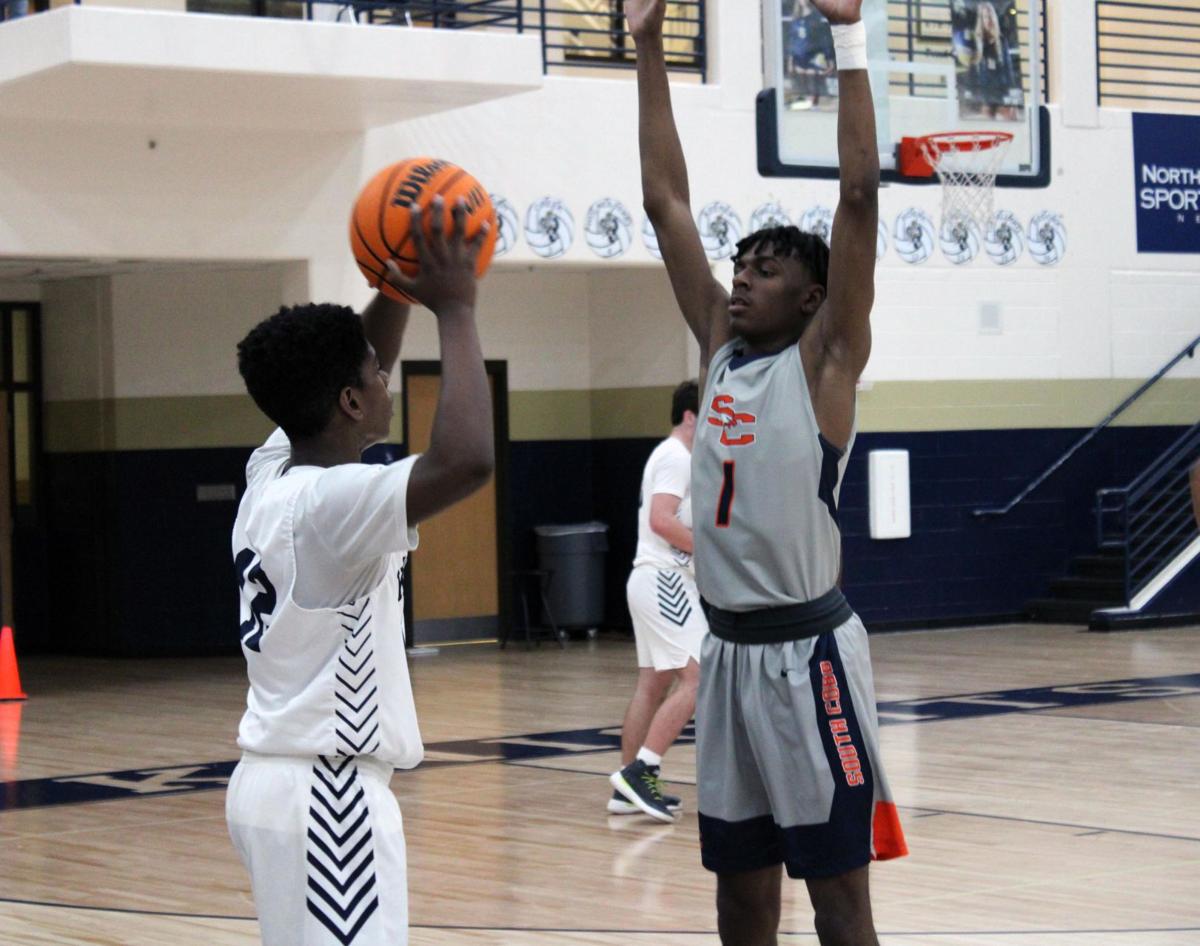 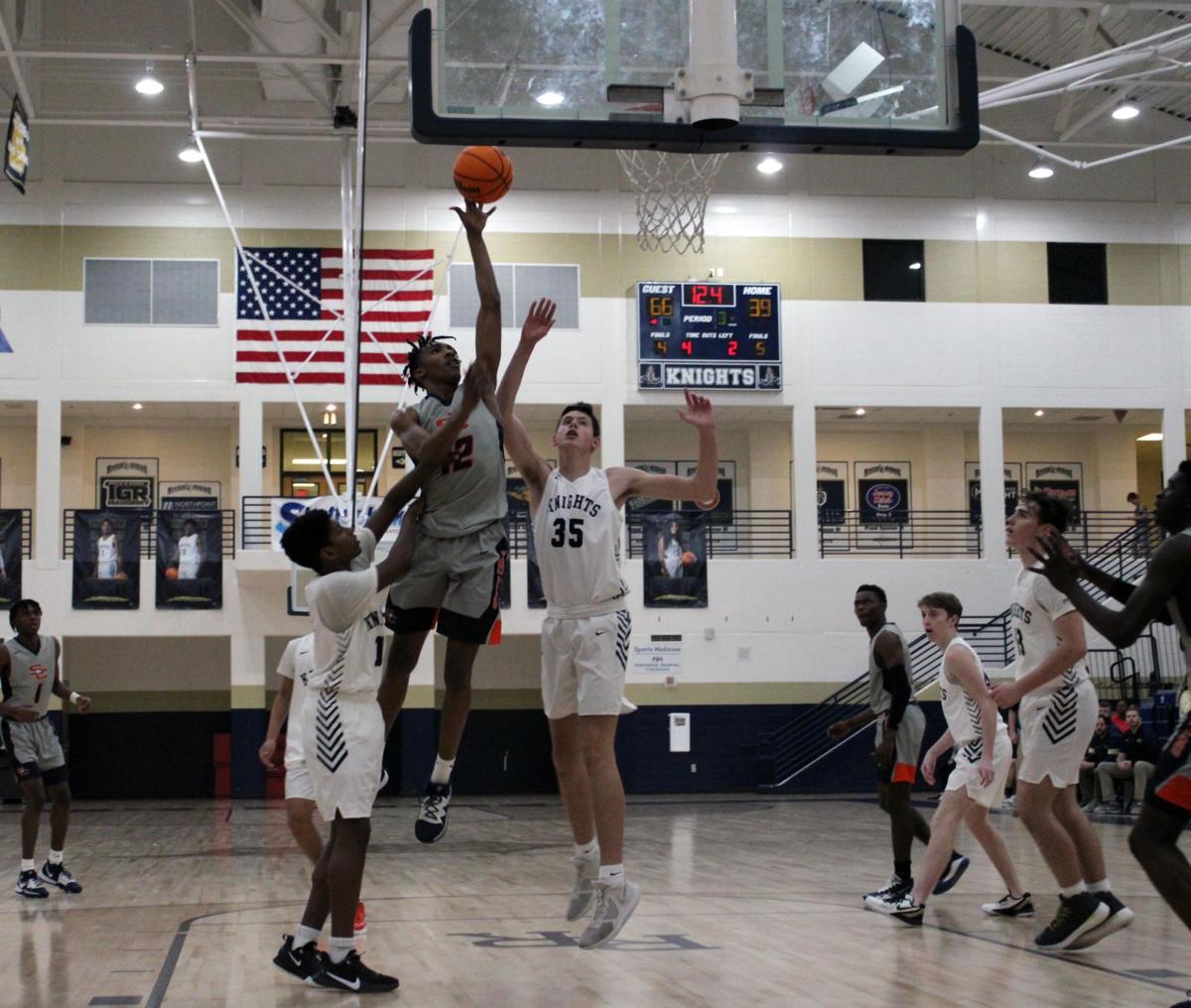 South Cobb's Emon Washington (12) rises for a shot in the lane over River Ridge's Braden Pierce (35) during Friday night's game in Woodstock. 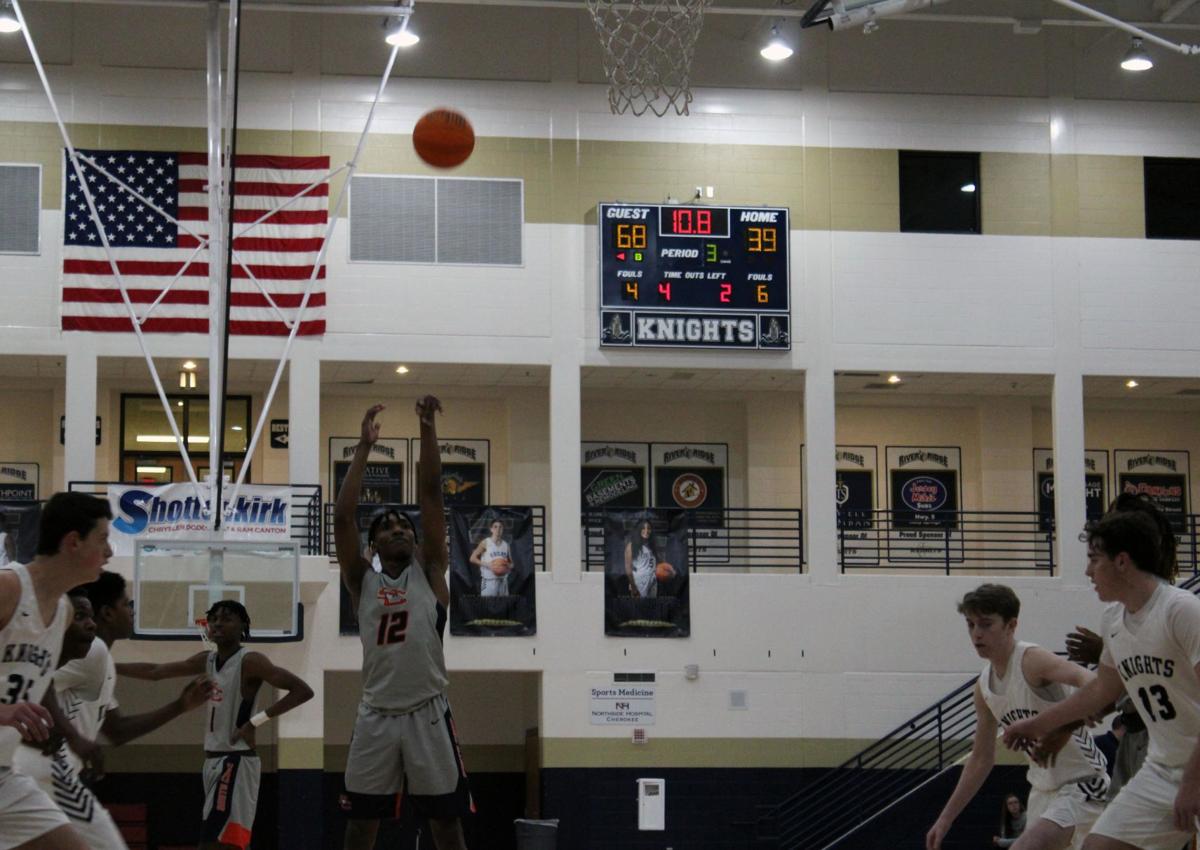 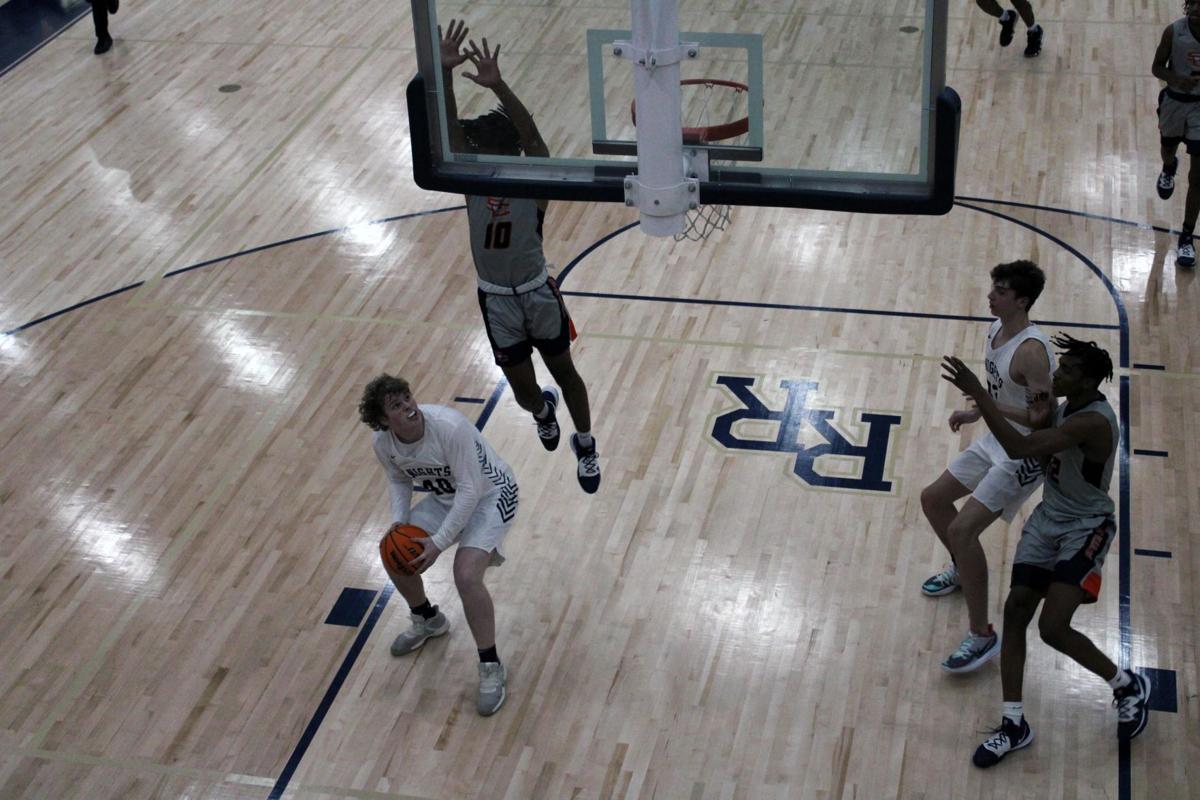 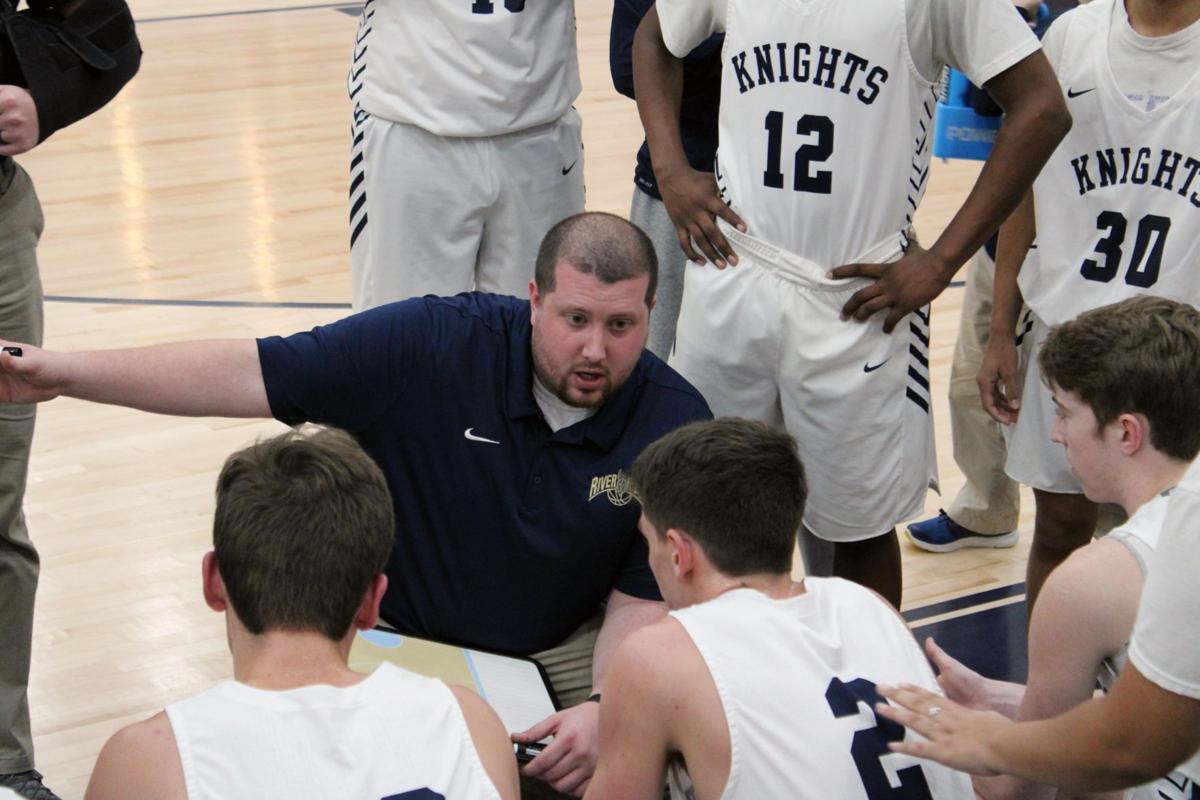 River Ridge coach Aaron Darling talks with players during a timeout on Friday night in Woodstock. 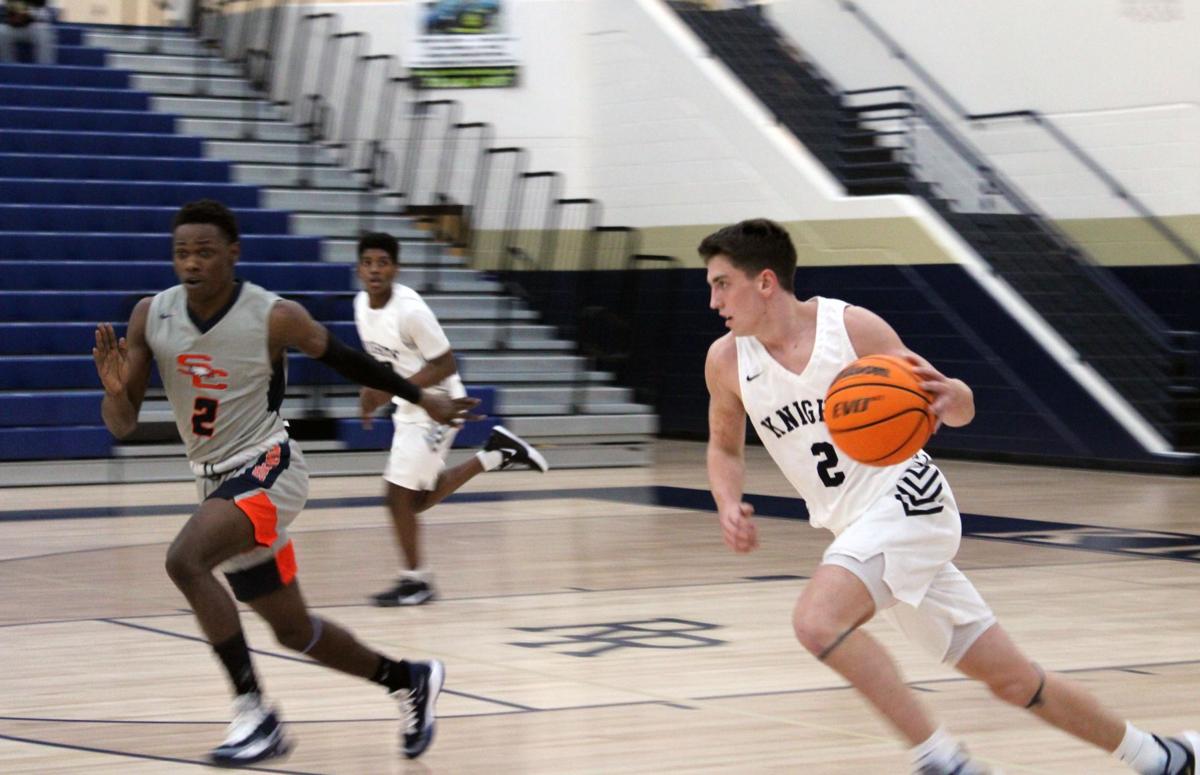 River Ridge senior Will Apple (right) dribbles the ball up the court against South Cobb's Shedrick Williams (left) on Friday night in Woodstock.

South Cobb's Emon Washington (12) rises for a shot in the lane over River Ridge's Braden Pierce (35) during Friday night's game in Woodstock.

River Ridge coach Aaron Darling talks with players during a timeout on Friday night in Woodstock.

River Ridge senior Will Apple (right) dribbles the ball up the court against South Cobb's Shedrick Williams (left) on Friday night in Woodstock.

WOODSTOCK - It didn’t take long for South Cobb to establish its pace in its first game of the new year.

The No. 2-ranked Eagles defeated River Ridge 78-54 on Friday night in Woodstock and remained the only undefeated team within Region 6AAAAAA. South Cobb (14-1, 7-0) was led by senior Emon Washington who scored a game-high 26 points but it was the Eagles’ relentless defense and transition offense for which River Ridge (6-9, 3-5) seemed to have no answer.

“We want our guys to buy into defense first,” South Cobb coach Greg Moultrie said. “We want the defense to lead to offense. Guys want to play defense because when they do they're available for those early outlet passes for transition buckets. We try to play that Carolina fast break.”

Off River Ridge makes, misses and even free throws, South Cobb pushed the ball up the floor and attacked the Knights defense at every opportunity. The Eagles’ pace prevented the Knights from setting up any sort of half court defense and on a number of possessions throughout the game it took the Eagles mere seconds to go from end to end and get a shot at the rim.

River Ridge was missing multiple players including senior Harry Bentley but coach Aaron Darling made no excuses after the game.

“I just didn’t think we competed really the whole game,” Darling said. “I think we were more worried about who we were playing than going out and playing hard. But it’s hard to mimic what (South Cobb) does in practice. They’re a really good team.”

South Cobb held a 26-10 lead at the end of the first quarter. The Eagles scored one of their many transition buckets following a pair of Knights’ free throw attempts midway through the second quarter forcing Darling to call a timeout.

“That was really the story of the first half and the third quarter,” Darling said. “We know they’re good, but stuff like that is an effort thing and I didn’t think we competed at times.”

Off their defense and defensive rebounding South Cobb gets out on the break and scores under five seconds half the time. Transition defense, among other things, will be needed to beat this team. At the half @SouthCobbBball 44@rrhs_Bball 27 pic.twitter.com/mVd6YrbLCz

The Eagles extended the lead to over 30 points late in the third quarter and saw contributions from up and down its lineup. Zocko Lilttleton finished with 19 points and beyond Washington was the only other player in double digits for South Cobb, however nine different players scored points for the Eagles.

“I’m confident in every one of our players, that’s why they’re on the team,” Moultrie said. “We don’t have guys who are just on the team to fill a jersey. You’re expected to produce when you play and we want to make sure each one of our guys is ready.”

The win was South Cobb’s 13th straight and after coming off three wins last weekend the Eagles looked like a well-oiled machine. Conversely, River Ridge was playing its first game in nearly two weeks and the rust seemed to show.

There were bright spots for River Ridge, however, as Jared Russo finished with a team-high 17 points and looked confident at times against the length of South Cobb. Seniors Will Apple added and Zack Cockrel scored 11 and 10 points respectively, while freshman David Hansraj and Jackson Head gained valuable experience against one of the best teams in the state.

“We’re definitely in the mix in the region,” Darling said. “South Cobb is by far at the top, but I really think those two through four spots are wide open going into that region tournament. We’re still trying to change the culture here and that doesn’t happen overnight. I think we’re on the right track.”