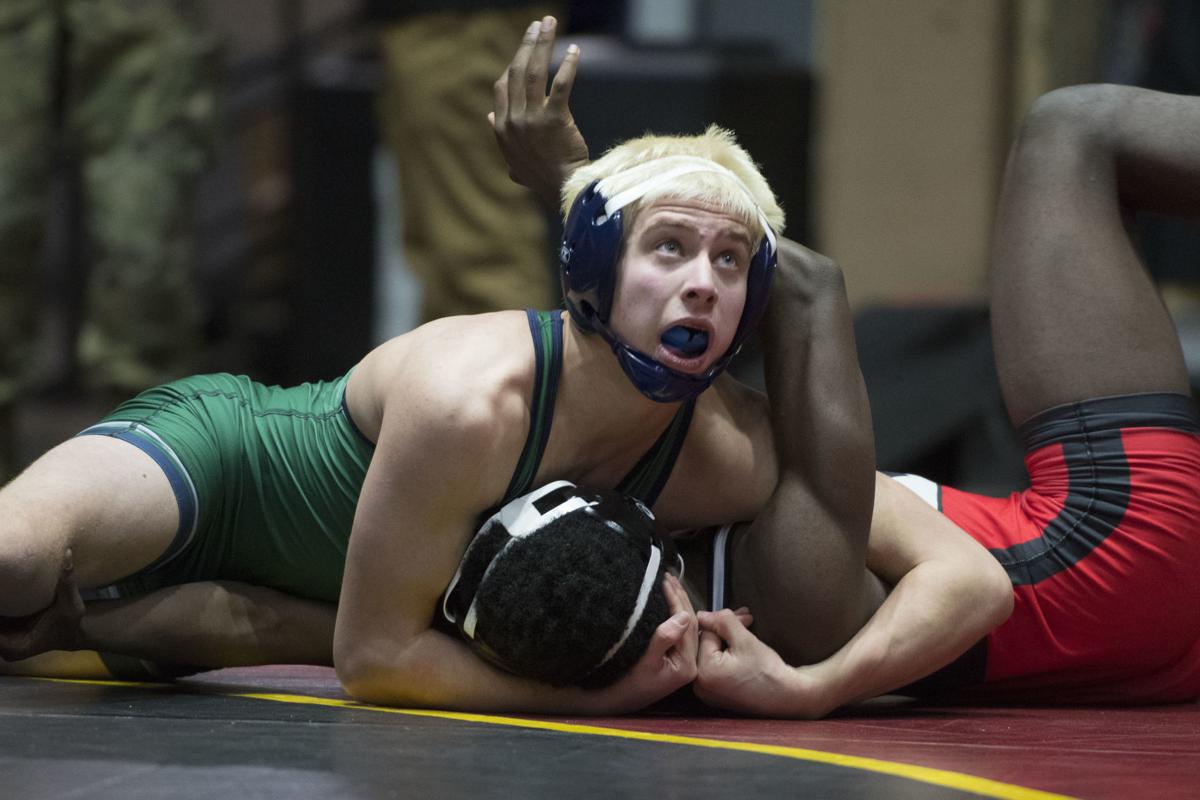 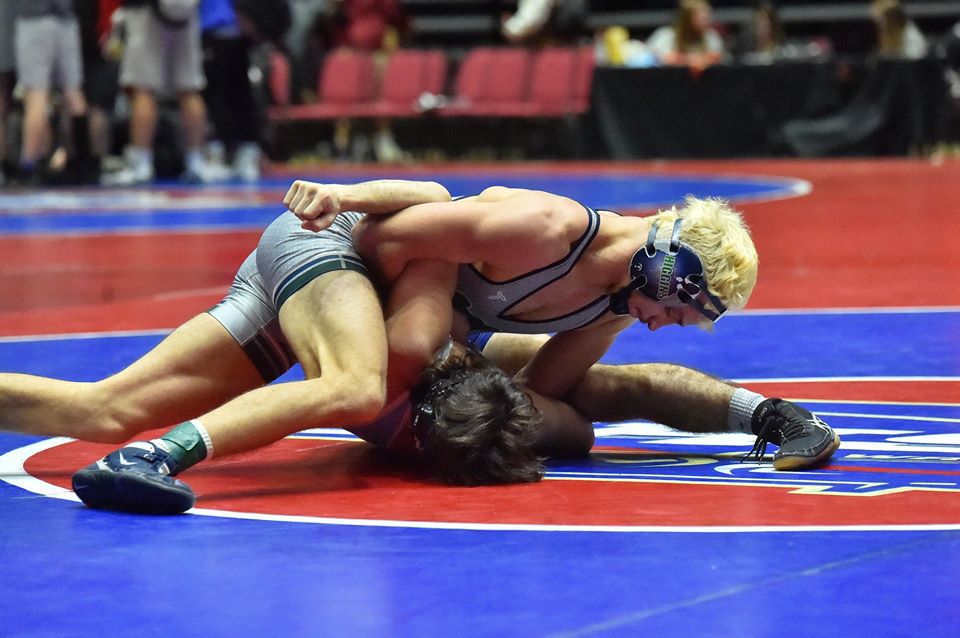 Creekview Wyatt Higgins tries to pin Cambridge’s Brenden Boyd during the third place match at the wrestling state duals on Saturday in Macon. 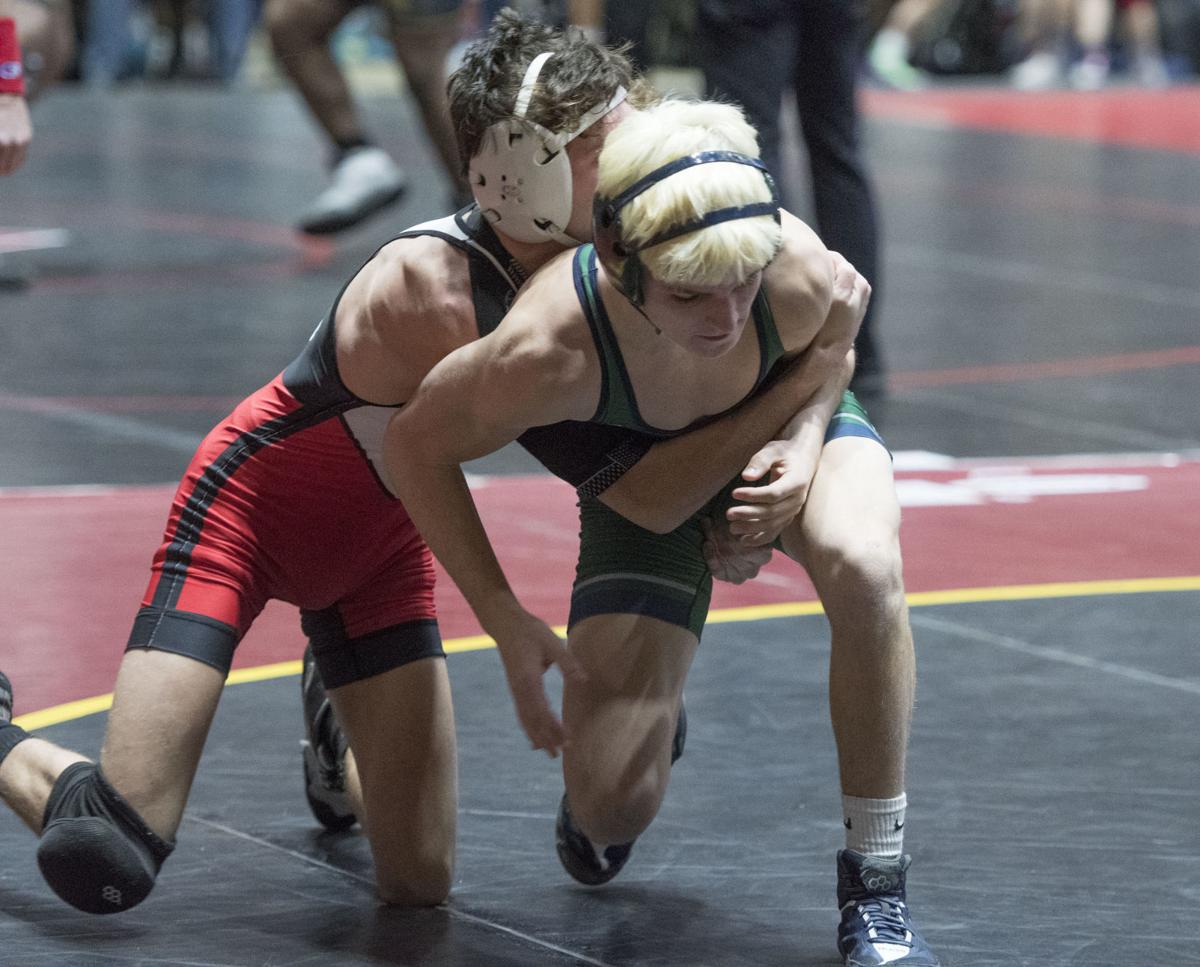 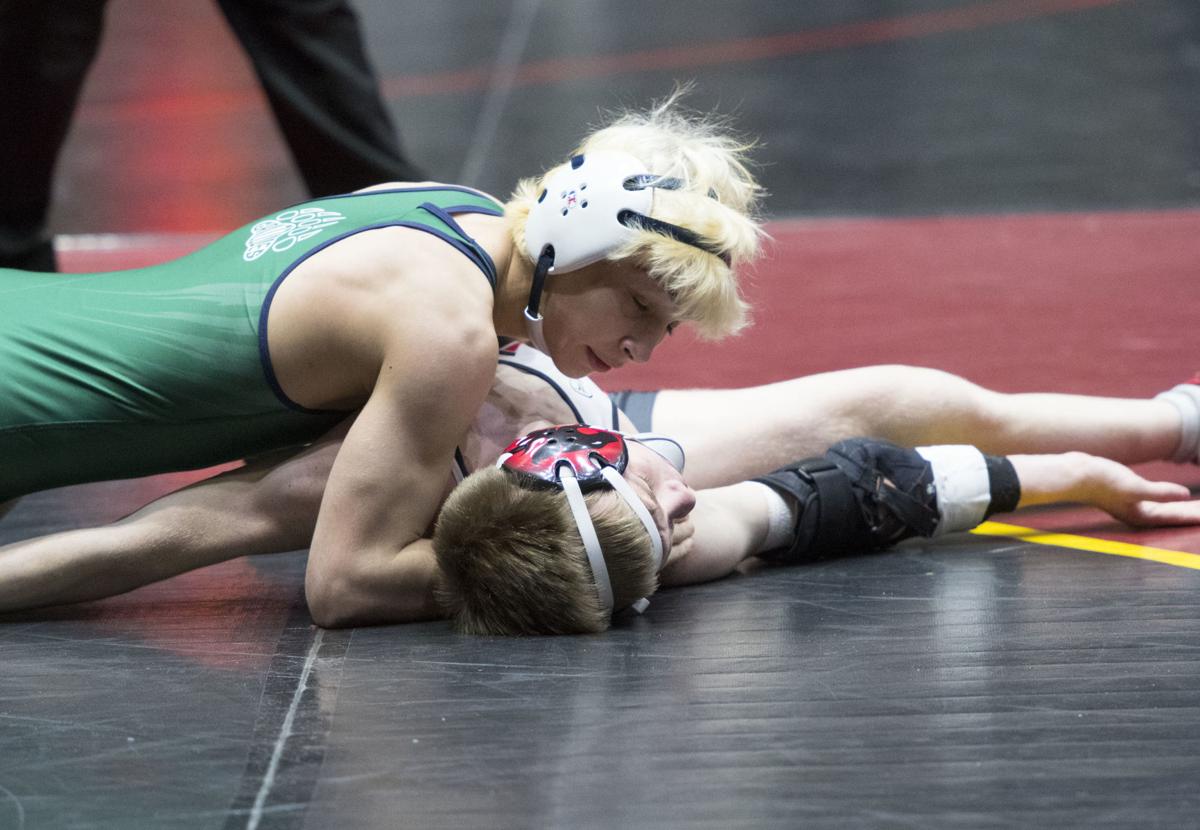 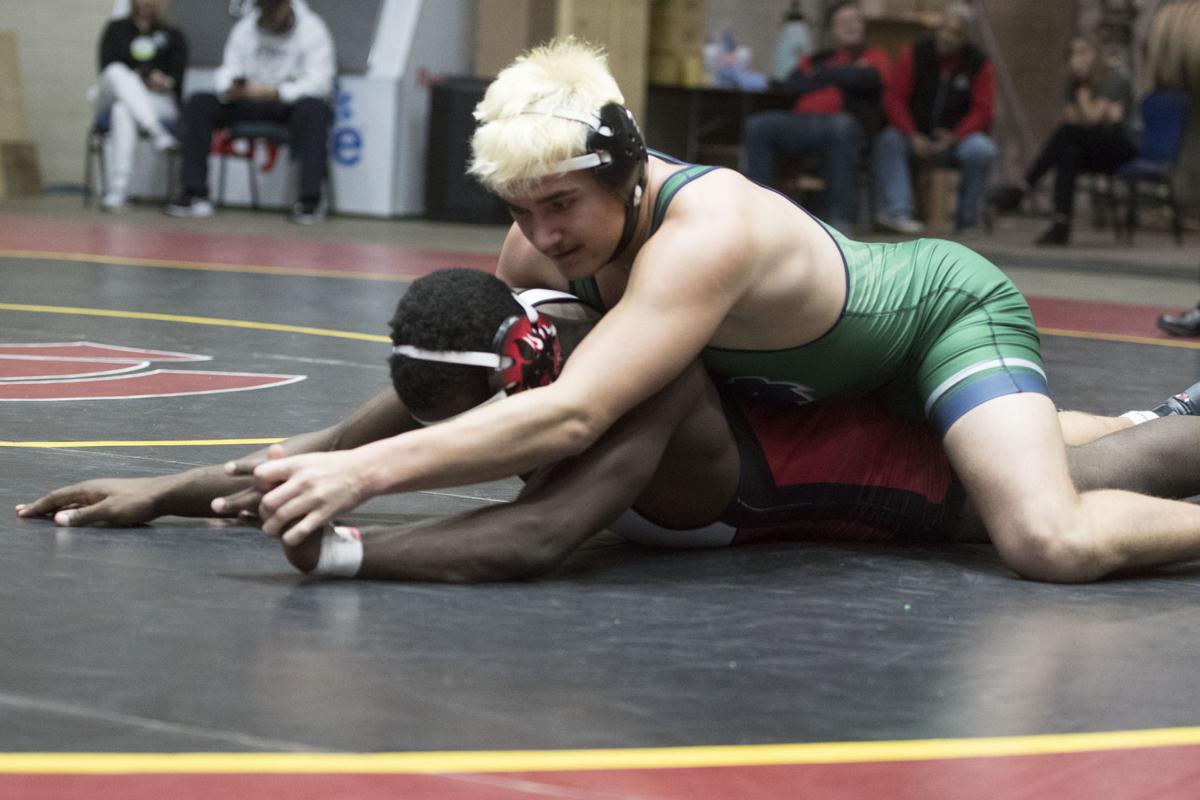 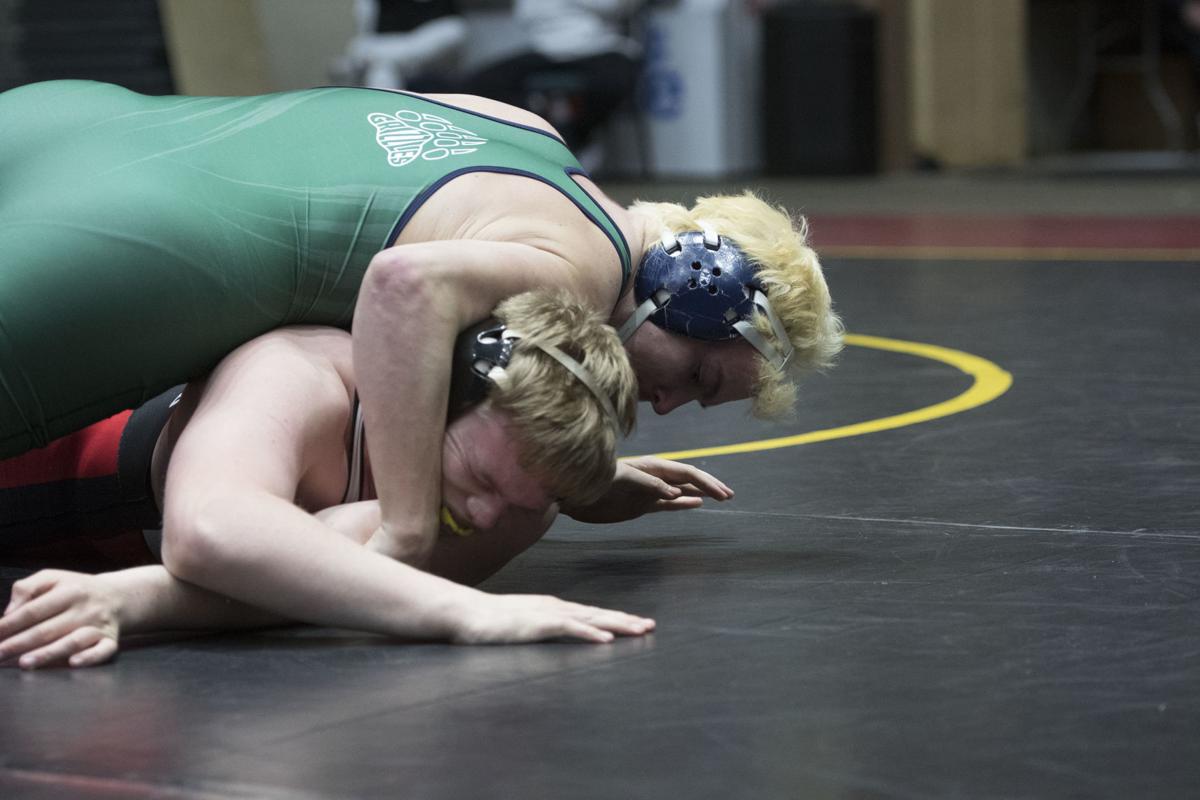 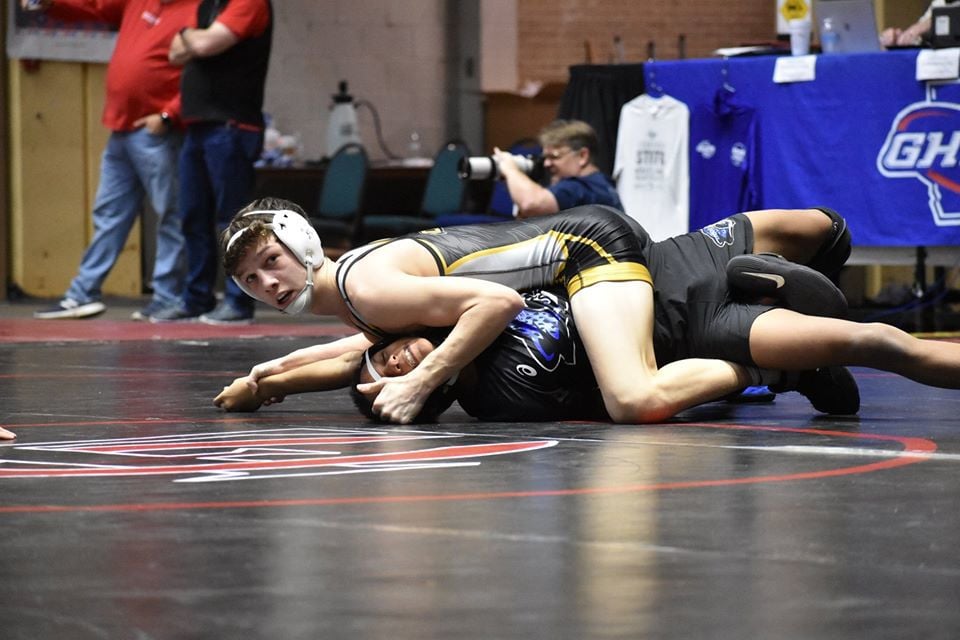 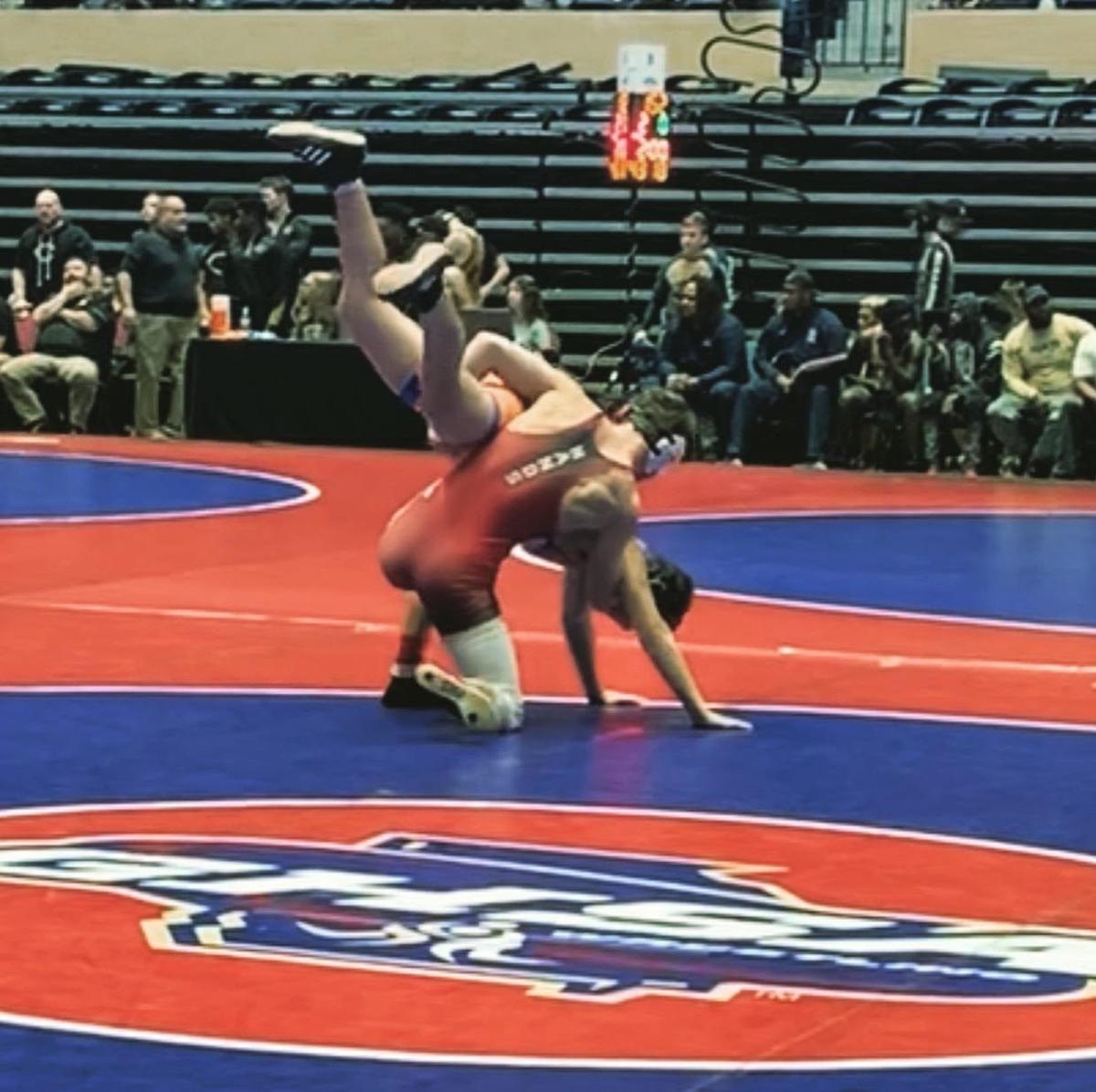 Creekview Wyatt Higgins tries to pin Cambridge’s Brenden Boyd during the third place match at the wrestling state duals on Saturday in Macon.

Each of the three Cherokee County teams claimed at least one victory at the wrestling state dual championships in Macon this past weekend, and one program nearly claimed a title.

“It was an intense battle,” Creekview coach Joe Hulen said. “We had some key matchups that went our way and a couple others that didn’t. But our kids are gonna are gonna bounce back and be ready for the traditional tournament coming up.”

The Grizzlies responded in Macon, going on to defeat Alexander (58-13) and Cambridge (35-30) in the consolation bracket en route to claiming the third place trophy. Creekview finished the tournament with a 4-1 record and Hulen said despite falling short of the ultimate goal he was proud of the team’s accomplishment.

“Right after the (Pope) match it was pretty tough,” Hulen said. “We talked to the guys about how this wasn’t the goal and how it was important not to throw in the towel for the weekend. We went 35-3 in duals this year so it was a great season. You can’t have a much better dual season than that. We have 14 guys who want to wrestle six minutes and that’s all you can ask for. I’m extremely proud of them.”

Creekview’s region rival Sequoyah finished its state duals tournament with a 2-1 record after falling to No. 1 seed Richmond Hill in the first round and knocking off Stephenson and Gainesville in the consolation bracket.

The Chiefs lost in consolation quarterfinals to Brunswick but after qualifying for the state duals for only the second time in program history, coach Zach Jones was pleased with the weekend overall.

“I thought our team did a great job bouncing back and we handled ourselves really well to put ourselves in a position to finish in the top six,” Jones said. “I couldn’t be happier with the effort our guys showed.”

“Being in the Macon Coliseum, it’s the big show. We don’t wrestle any other duals in an arena like that all year long and it’s great for the kids who hadn’t experienced that venue before. There’s only 16 teams in 6A who get to go down there and it really does make for a special weekend.”

Cherokee finished the weekend tournament with a record of 1-2 in the AAAAAAA bracket. The Warriors fell 36-27 to Mountain View in the first round before rebounding to defeat Parkview 75-6 in the first round of the consolation bracket. Cherokee fell 43-32 to McEachern and was eliminated on Friday.

“Obviously we would have preferred to have a couple more wins in there, however I felt like our kids wrestled extremely well,” Cherokee coach Jerry Kadian said. “Our two losses came down to the final few matches. We rebounded against Parkview, I think that win helps the kids realize that momentum is a very real thing. You’re on your own at there on the mat, but once we got going it was hard for Parkview to get the momentum back.”

Creekview and Cherokee were back on the mats practicing on Monday, while Jones allowed Sequoyah a day of rest before regrouping to prepare for the region traditional tournaments which begin next weekend. All three programs have multiple wrestlers with goals of claiming individual state titles at the traditional state championships and each coach agreed there wasn’t much time to let off the throttle in preparation.

“We just came up a little bit short this past weekend,” Kadian siad. “But we’re right back to work for this season and for the coming years.”