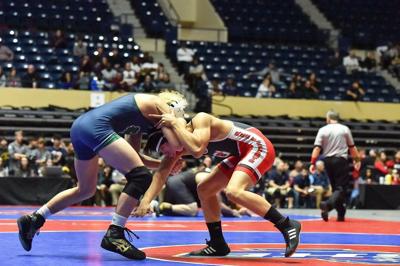 Pope won 28-26, with the match coming down to the final weight class and Creekview clinging to a one-point lead.

However, Pope’s Andrew Barner beat Creekview’s Andrew Riley in a 4-2 decision at 182 pounds, and the Grizzlies fell just short of their first championship appearance.

The match began at 195 pounds, where Pope’s Dylan Moss earned a 5-4 decision over Jackson Gilleland. Parker Bennett (285) and Eli Daugherty (220) each earned major decision victories for Creekview to follow, but Pope went on to build its lead in the lightweights.

However, at 170, Creekview’s Jared Willmarth pinned Pope’s Will Walther in less than a minute capping a dramatic comeback for the Grizzlies, who led 26-25 entering the final match.

The loss moved Creekview to the consolation bracket, where it will wrestle Saturday morning against the winner of an earlier match between Alexander or Coffee.

In the Class AAAAAAA tournament, Cherokee was unable to advance to the third and final day of the state duals after winning the Region 4AAAAAAA title last week.

The Warriors fell to Mountain View 36-27 on Thursday in the opening round, before rebounding to beat Parkview 75-6 on Friday in the first round of the consolation bracket.

That set up a matchup with McEachern in the second round of the consolation bracket, but the Warriors lost 43-32 and were eliminated from the tournament. Jacob Silka (106), Kade Johnson (126), Trevor Hands (138) and T.J. Parks (285) each finished the tournament with perfect 3-0 records.

The two wins set up a dual with Brunswick on Friday night in the third round of the consolation bracket.