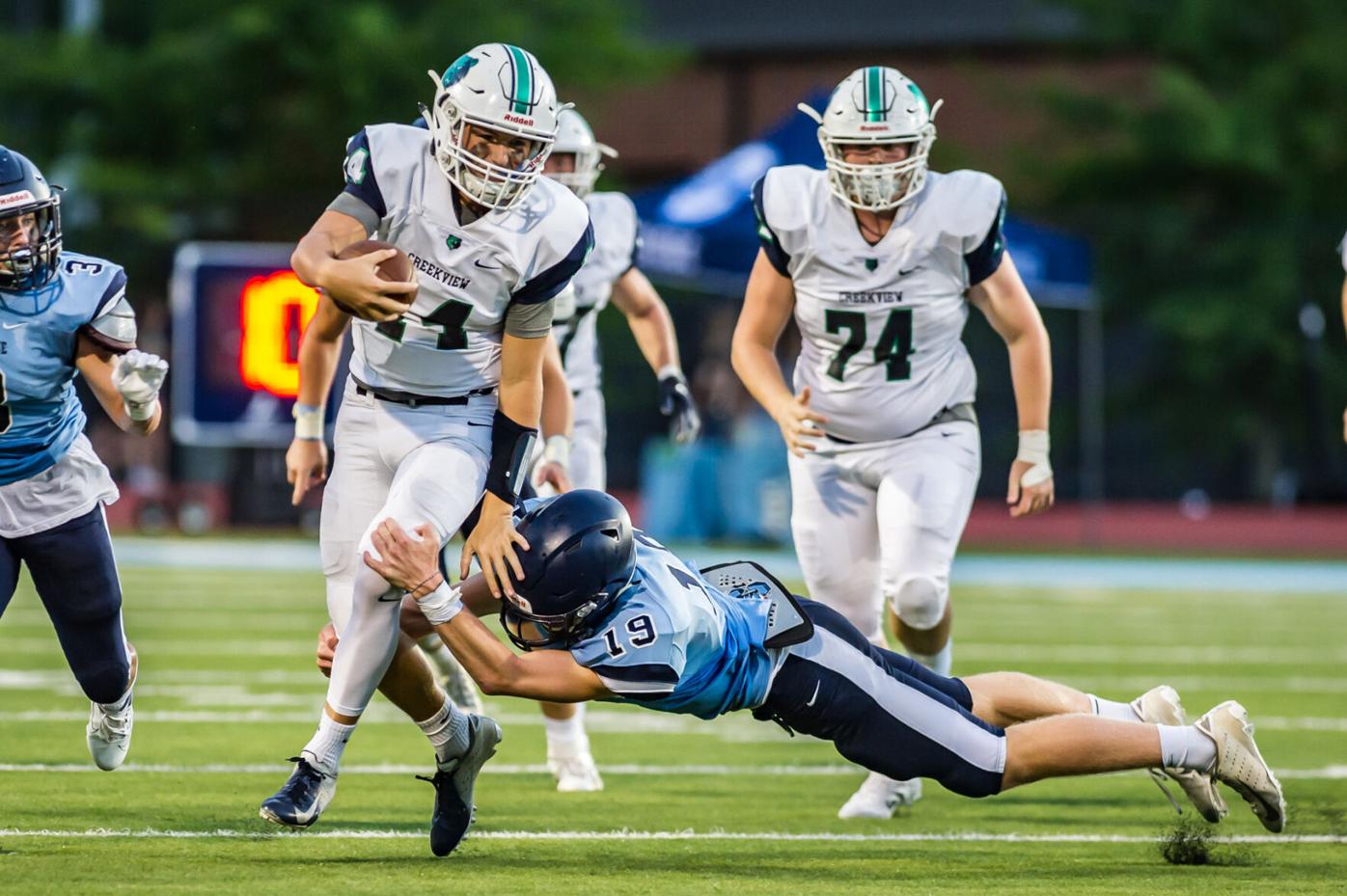 Creekview’s Brody Rhodes is hit by Cambridge’s Will Petit during the teams’ 2019 season opener. Rhodes returns after a season in which he accounted for more than 2,000 yards. 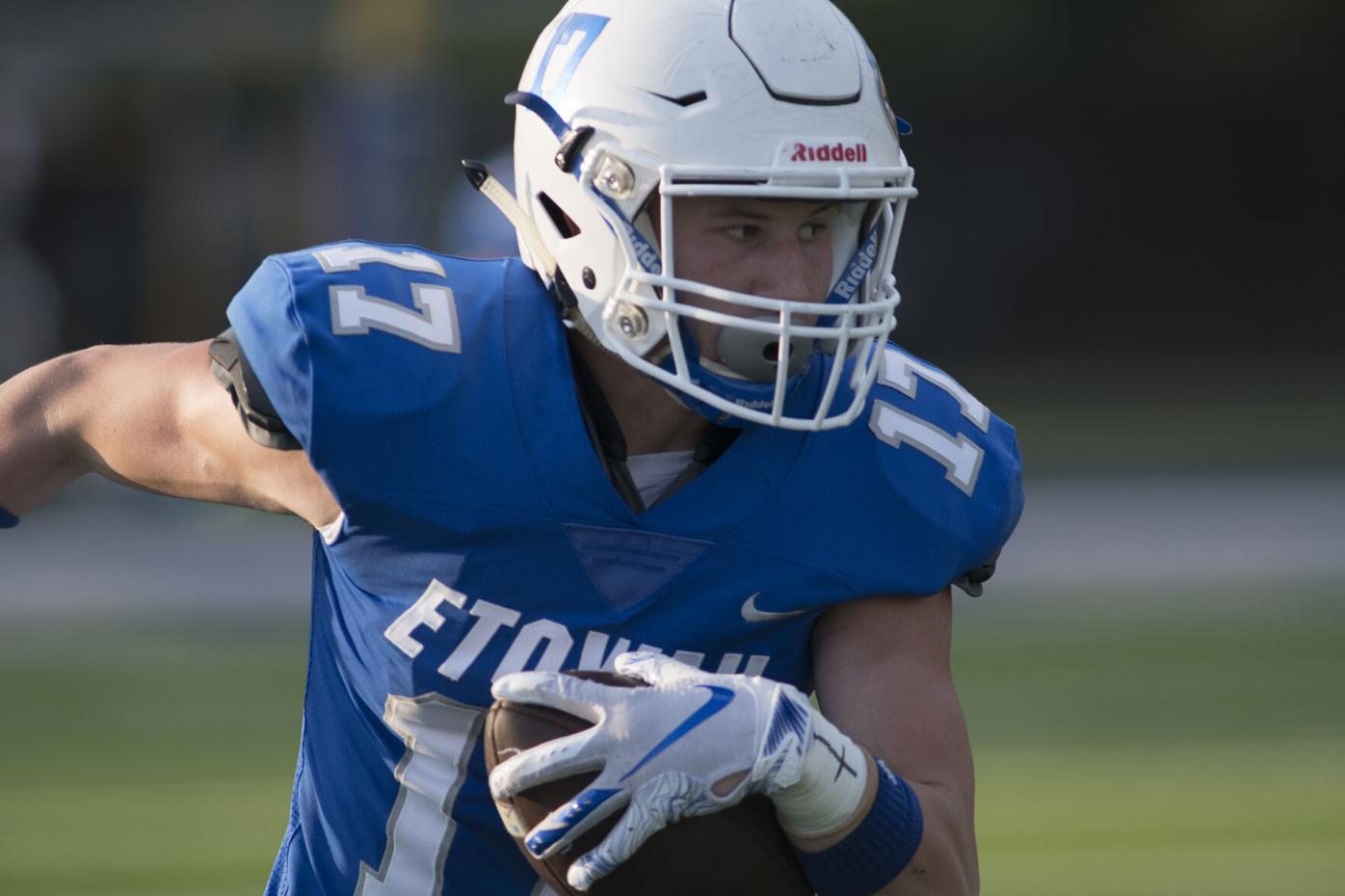 Brock Rechsteiner is back as a key part of Etowah’s offense as it opens its first season under new coach Matt Kemper. The Eagles will be hosting Creekview in the first meeting of the county rivals.

Creekview’s Brody Rhodes is hit by Cambridge’s Will Petit during the teams’ 2019 season opener. Rhodes returns after a season in which he accounted for more than 2,000 yards.

Brock Rechsteiner is back as a key part of Etowah’s offense as it opens its first season under new coach Matt Kemper. The Eagles will be hosting Creekview in the first meeting of the county rivals.

Creekview, which will begin its campaign on the road for the second consecutive season, is only two years removed from a state quarterfinal appearance. With a .651 winning percentage, the program has finished below .500 only twice in its 14-year existence.

The Grizzlies bring back a number of impact players and should be led by senior quarterback Brody Rhodes, a dual-threat who totaled more than 2,000 yards and 18 touchdowns last year. Rhodes will have several returning receivers at his disposal, including Andrew Cloy and Dawson Currie.

“Any time you bring your quarterback back, you feel like you’re ahead of the game,” Williams said. “Having the guys we have returning on defense helps, too. Those guys understand our expectations.”

Defensively, Creekview returns impact players at all three levels. As a freshman in 2019, Isaac Hubert led the county in with 9.5 sacks and earned Freshman All-American honors by MaxPreps, while senior Grant Anderson, the team’s leading tackler, should be the anchor at middle linebacker. Junior safety Cale Williams returns as one of the best athletes on the roster and should be the leader on the back end of the defense.

“The old football cliché is, ‘Play every play like it’s your last,’ and that may be the most overused cliché of all time, but these guys have seen it,” Williams said. “We just want them to soak it all in. Soak in the moment of what a Friday night is all about. We want to compete and enjoy it.”

Etowah will begin its season with a new coach on the sideline for the first time since 2012 as Matt Kemper took over after previous stops at Roswell, Johns Creek and Pope. Kemper’s teams have reached the playoffs each of the past four seasons, while in his 13 seasons coaching in Georgia, his teams have won four region championships and advanced to the state playoffs seven times.

Etowah has advanced the playoffs in each of the past seven seasons, the longest such streak in Cherokee County.

“This is year 28 for me, and in no way shape or form are you prepared for what happened this year. It’s been indescribable,” Kemper said. “You know, I’ve got a million old coach’s sayings, but I’ve had one ringing in my head, and that’s, ‘You’re never as good or as bad as you think when you’re playing yourself.’”

It remains to be seen who will be the starting quarterback for Etowah — a three-way battle between Brayden Bohannon, Will Curcio and Dawson Heck was ongoing in the preseason — but whoever ends up taking snaps will have plenty of weapons to utilize.

Senior wide receiver Brock Rechsteiner finished third in the county in receiving yards last season. Alongside him on the outside, Blake Bohannon should see ample opportunities in the passing game. In the backfield, Klivert Many and Remington Adams return after each saw plenty of action in 2019.

Defensively, linebacker Austin Skinner and defensive back Trevor Fair return after earning first-team all-region and all-county honors as juniors. Lane Cantrell should join Skinner as an impact player at linebacker and Jared Weitkamp returns along the defensive front. Sophomore Carson Allen also returns after finishing his freshman season as one of the best kickers in the county.

“The thing that’s echoed for me is we can’t really kind of ease into the season, because the next few weeks might not be here,” Kemper said, “but I’m also really excited. The opportunity to come to Cherokee County doesn’t come around often because coaches get here and don’t want to leave.”