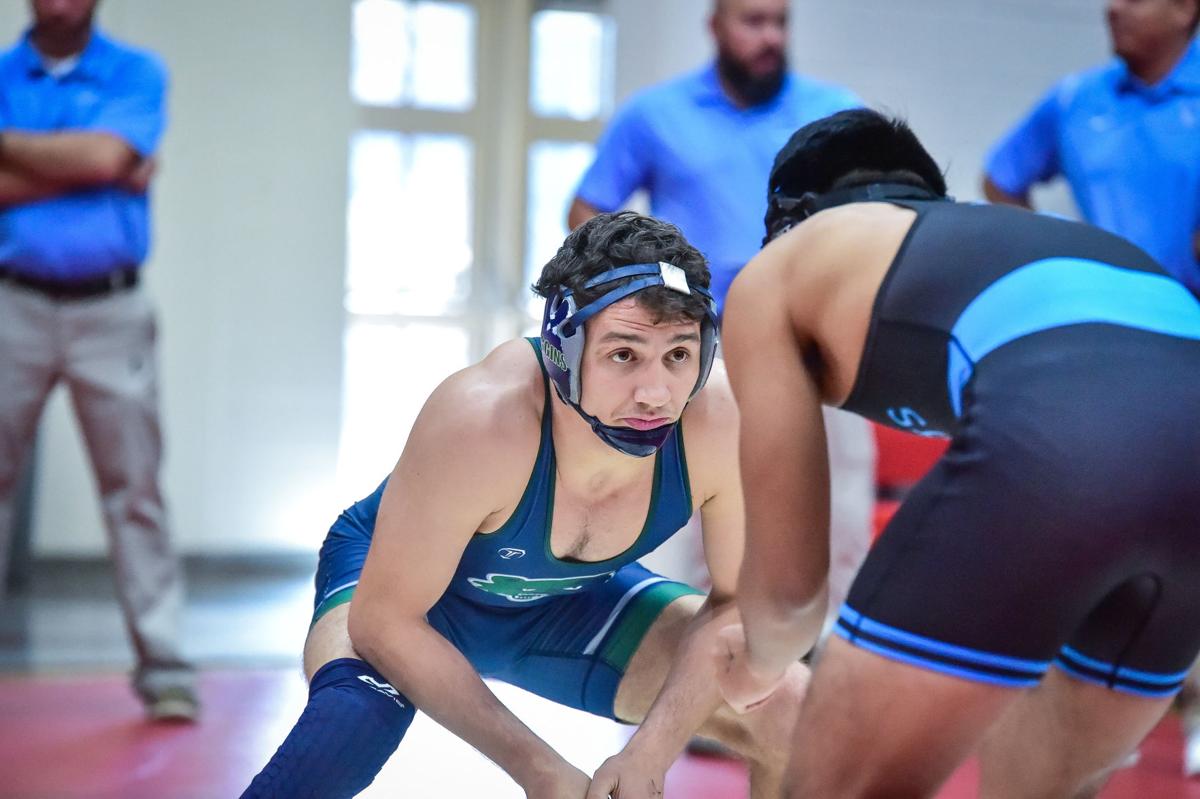 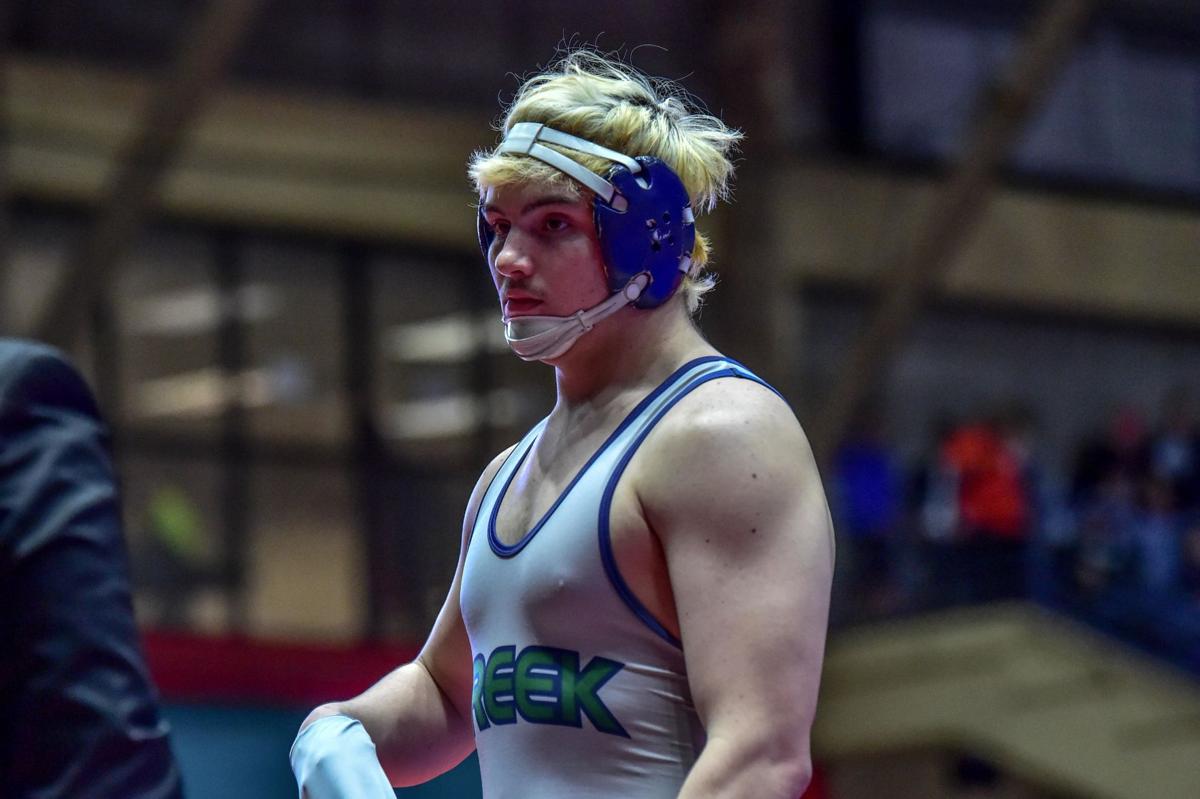 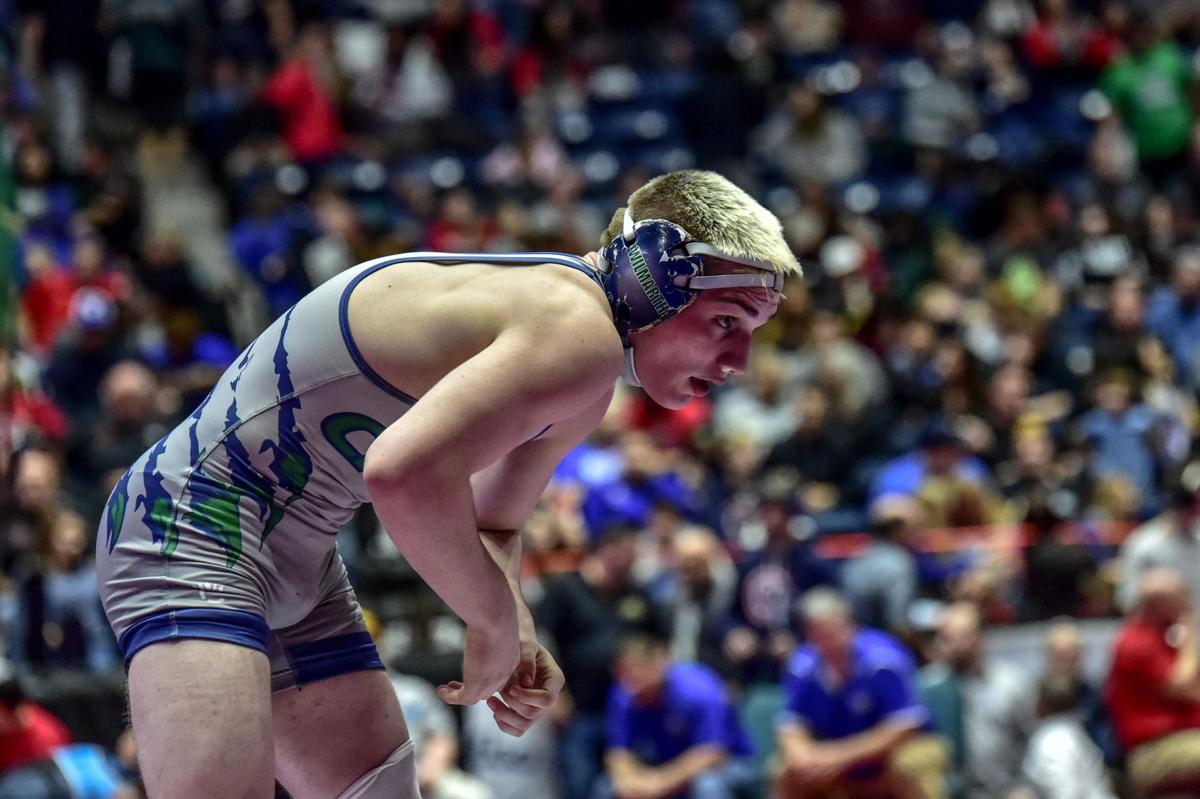 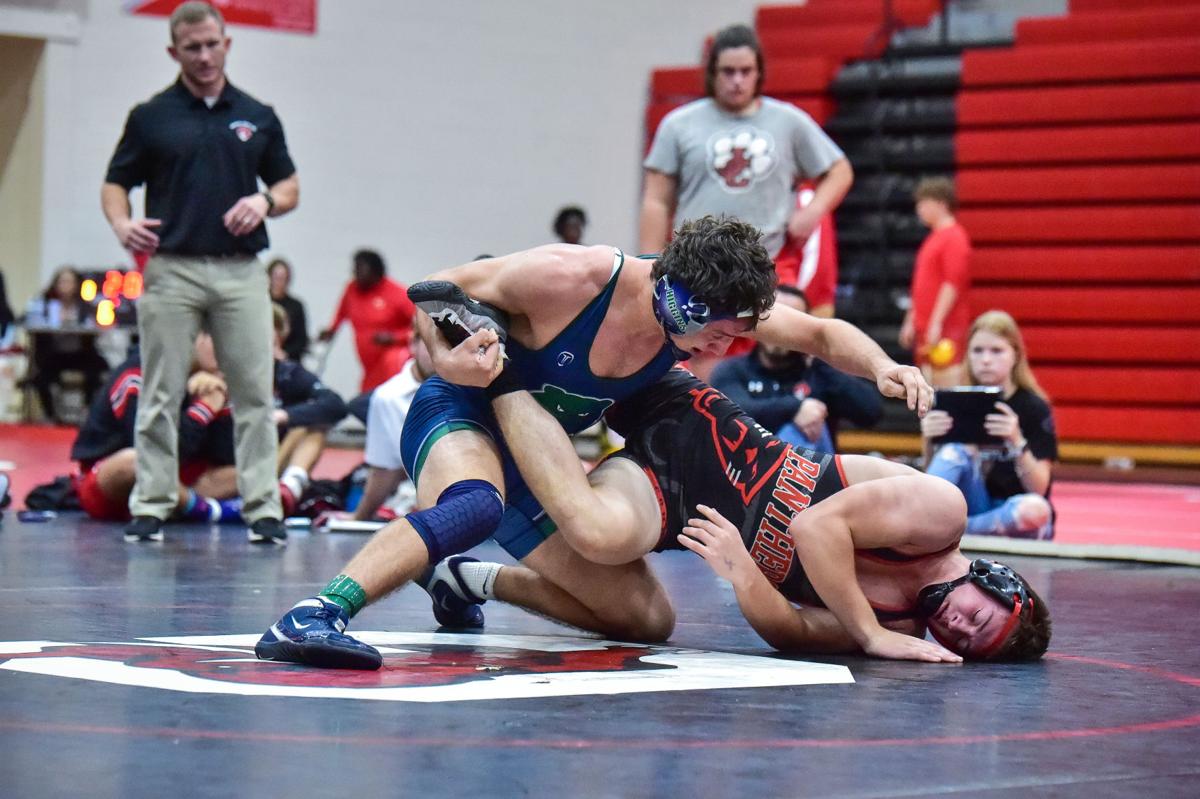 Creekview senior Wyatt Higgins grapples with opponent during a match. 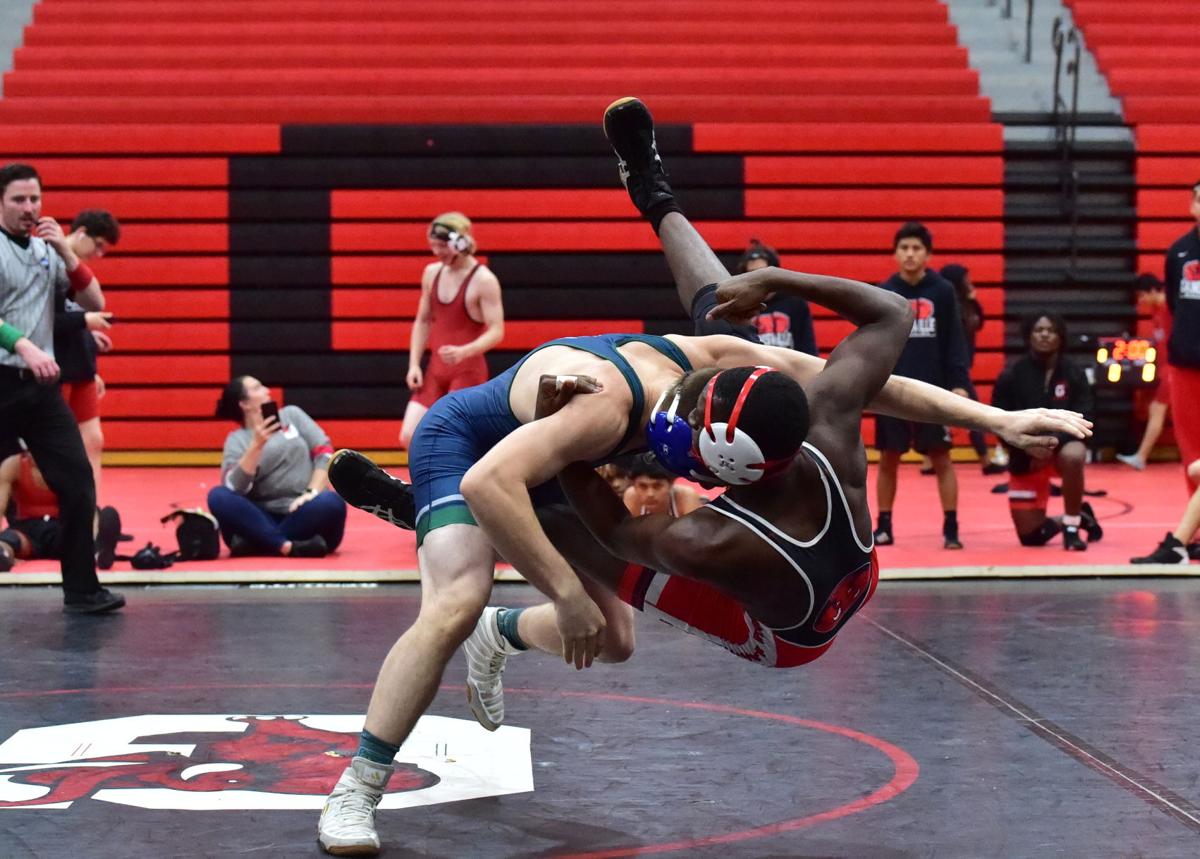 Creekview senior Jared Wilmarth throws his opponent during a match.

Creekview senior Wyatt Higgins grapples with opponent during a match.

Creekview senior Jared Wilmarth throws his opponent during a match.

With a few weeks under their belts, wrestling coaches have a better idea of what to expect this season.

Cherokee and Creekview look to defend their respective region traditional and dual championships, while a number of wrestlers from around the county will compete for individual state championships.

One team, however, may have the pieces to push for a state title.

Creekview finished fourth in the Class AAAAAA state duals last season, losing the semifinal and third-place matches by a combined seven points. The Grizzlies return five state-placers to a team second-year coach Joe Hulen said is one of the most experienced groups in program history.

Creekview has finished fourth, third and fourth the last three seasons at the state duals, and with 10 seniors and as many as seven set to start, the Grizzlies could be primed to win the program’s first team state championship.

“We’ve been really close to tasting that finals appearance, so we’re hungry for it,” said Hulen, himself a former Creekview wrestler. “I think we have the right goals in place. It’s just a matter of doing the little things every day to get to that point.”

Creekview has had an individual state champion every year since 2014, and senior Eli Daugherty returns to defend his state championship, albeit in a new weight class. Daugherty claimed the state title at 285 pounds last year, but he will likely wrestle at 220 this season.

Parker Bennett, a junior who missed last season with injuries, will step in at 285. He earned freshman All-American honors at the 2018 NHSCA National Championships while living in Tennessee.

Wyatt Higgins, a senior and three-time state-placer, is perhaps the most accomplished wrestler on the team and returns following a third-place state finish at 160. Fellow senior Jared Wilmarth (170) also placed third in the state last season.

“We’ve had the goal of a state championship for the past few years,” Hulen said. “If everyone stays healthy and gets to their right weight, we’ll definitely compete for that.”

Sophomores Andrew Cory (126) and Cade Sousa (145) both placed fourth in the state last season and should be key contributors along with junior Walker Wilkie (138) and senior Mason Botts (132).

Hulen does not shy away from his expectations this year.

“If we’re not in the state finals, I’d be highly surprised,” he said. “This squad is probably the most veteran group we’ve ever had. I really see us making a push for state championships in duals and traditional.”

Creekview could be presented with a challenge from within its own region. Sequoyah finished as the runner-up in Region 6AAAAAA last season and finished tied for eighth at the state duals.

Zach Jones, who took over as head coach after three years on staff, will also have a few top-tier wrestlers at his disposal. Senior Christian Small won a state championship at 120 pounds last year, while junior Carson Throne finished as the runner-up at 113.

Last year’s appearance at the state duals was the first in program history, and with an influx of young talent, Jones does not expect a drop-off.

“We have very high expectations for the season,” he said. “We hope to return to state duals again and look to place as a team. Our goal is to get as many kids on the podium as possible.”

Also returning for Sequoyah is Reese Ledbetter, who will be defending his region championship at 195, and state-qualifier Charlie Throne (126). Jones also sees contributions from freshman Jake Labasi and junior Tomus Satterfield.

Jerry Kadien returns for his fifth season as coach at Cherokee, which claimed the Region 4AAAAAAA dual and traditional titles last season and will have a mix of returning experience and holes to fill.

Senior T.J. Parks finished sixth in the state last season at 285 and will be joined by Trevor Hands (145), Jacob Silka (113) and Jake Matheny (182), Kade Johnson (132), Vinnie Montgomery (138) and Stephen Weatherby (170) as key returning pieces according to Kadien. Hunter Pendley (220) will likely be an important newcomer in the lineup.

The Warriors finished with a 30-3 dual record last season, and Kadien expects similar results this season.

“We return many experienced wrestlers competing for varsity spots, all primed to have breakout seasons,” Kadien said. “Our top-tier wrestlers have high goals for the team, including repeating as region duals and traditional championships, as well as standing on the podium at the end of the traditional tournament in February.”

Jeremiah Lutz returns to Etowah for his second season as coach and will need to replace Blake Smith, who finished as runner-up in Class AAAAAAA at 152. The Eagles finished sixth in the region last season, and Lutz is looking to juniors Jaden Field (220) and Riley Mostyn (138), along with Joseph Lago, to lead the team this season.

Lutz, a four-time state placer and 2011 state champion at Etowah who was also a member of two national championship teams at Emmanuel College, has experienced the growth that comes from hard work.

“The kids are constantly improving,” Lutz said. “I can’t wait to see where they are at the end of the year.”

Hudson Andrews (113) is the Knights’ only returning state-qualifier, but increased participation has Mullinax feeling optimistic about the team, which finished with a 12-8 duals record last season.

Junior Jesus Perez and senior Francisco Altamirano both return after qualifying for sectionals a season ago, while senior Maverick Cooper and sophomore Aidan Merriman should serve as important pieces as well.

“Currently, we have the highest numbers in program history,” Mullinax said. “We hope to improve on our duals wins this year. We are hoping, even with our youth, we will be able to send more guys to sectionals and state than we have in the past.”

Woodstock, which finished fourth in Region 4AAAAAAA last season, will need to replace three seniors from last year’s team, but returning are sophomore Landon Yarbrough, who finished fourth in the state at 120, and junior Michael Roe, a two-time state placer and defending region champion at 126.

“We’re looking to advance to state duals and land within the top 10 in traditional state,” said Powell, in his 10th season as coach.