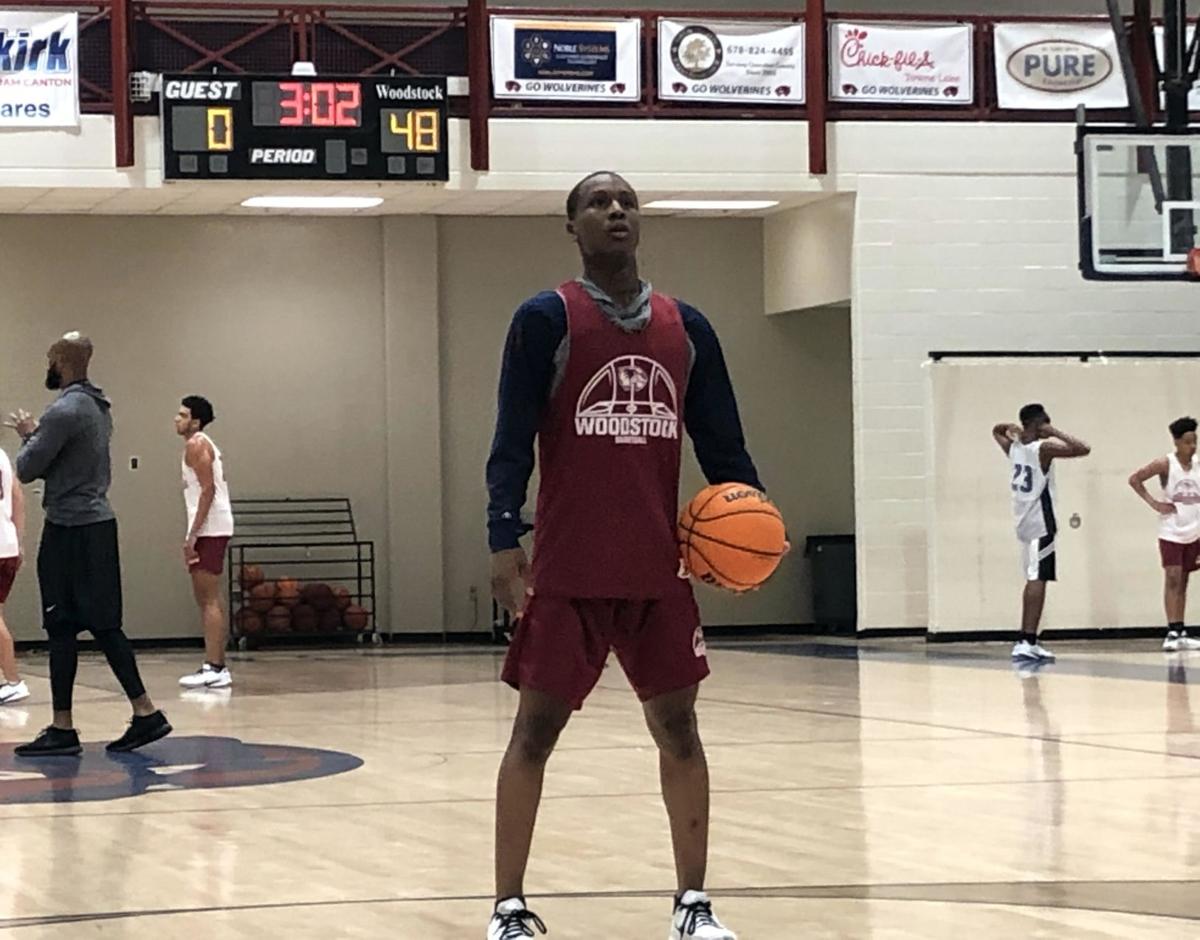 After arriving from Kell as an offseason transfer, Woodstock senior Rakim Thompson has flourished, averaging 19.3 points, 6.2 rebounds, 5.2 assists and 2.9 steals over 10 games this season. Below: Thompson laughs during a recent practice. 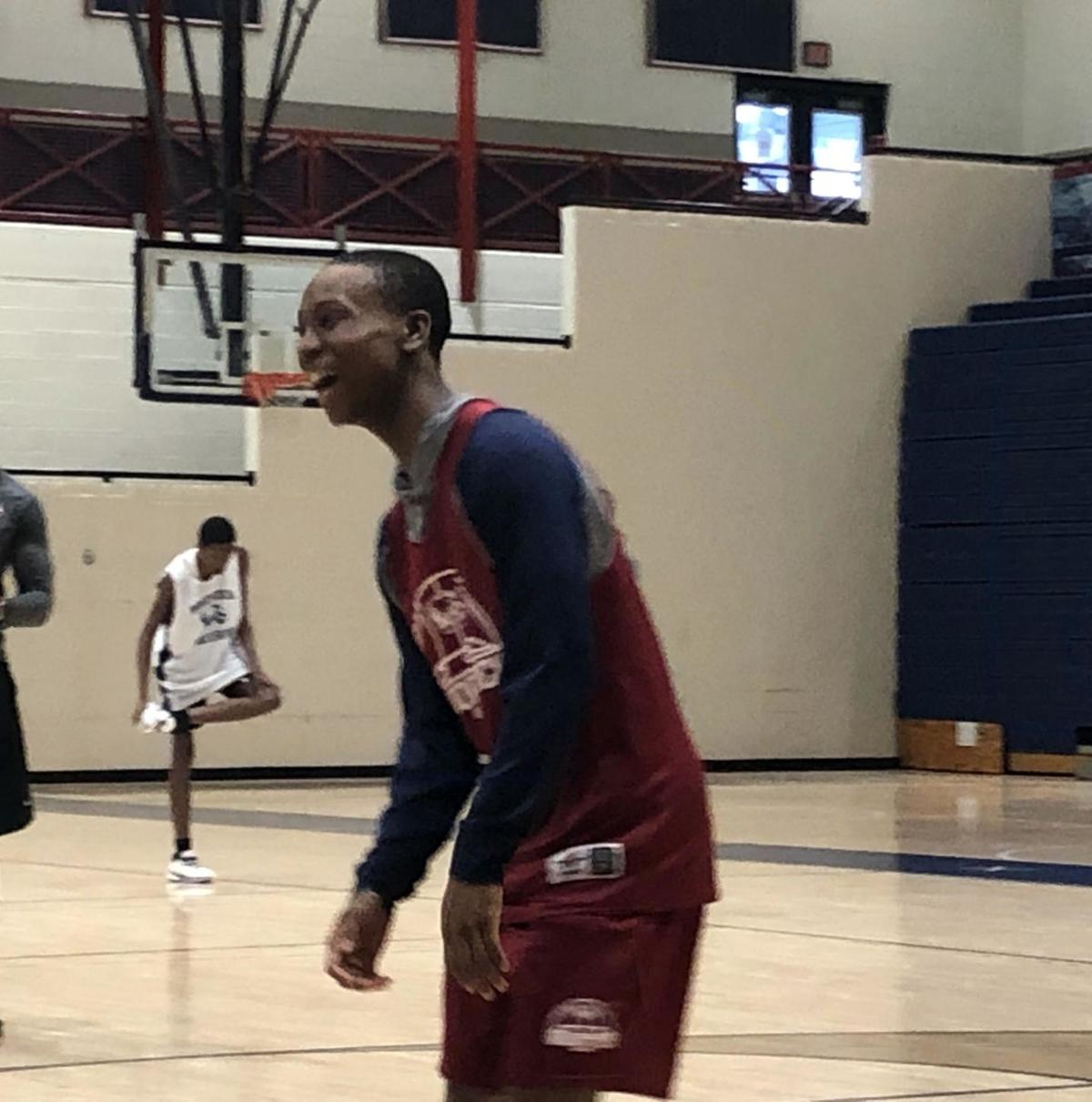 Woodstock senior Rakim Thompson has helped lead Woodstock to a 9-6 record so far this season, already two wins more than all of last season.

After arriving from Kell as an offseason transfer, Woodstock senior Rakim Thompson has flourished, averaging 19.3 points, 6.2 rebounds, 5.2 assists and 2.9 steals over 10 games this season. Below: Thompson laughs during a recent practice.

Woodstock senior Rakim Thompson has helped lead Woodstock to a 9-6 record so far this season, already two wins more than all of last season.

WOODSTOCK — Sometimes, all a player needs is a chance.

At an open house before the school year, a new student walked up to Woodstock boys basketball coach Josh Pierce for the first time.

“He introduced himself and told me he played the last couple years at Kell,” Pierce said. “I thought he looked familiar, and I did a little research after that.”

Soon after, Pierce was introducing Rakim Thompson to his new Woodstock teammates.

Thompson moved with his family to Georgia following his freshman year and spent the last two years playing primarily a defensive role at Kell. An offseason move landed him at Woodstock, where Thompson’s offensive ability was soon on full display.

“Coach brought me confidence,” Thompson said. “I didn’t have a great sophomore or junior year, so, coming in here, I was kind of timid. I knew it was my last year and had to show out. Coach told me, ‘Be who you are,’ and ever since that first game, my confidence just took off.”

Thompson earned the starting point guard role for Woodstock and has averaged 19.3 points, 6.2 rebounds, 5.2 assists and 2.9 steals over 10 games. A strained groin held him out of five games in early December, but the speedy guard assumed his role running the offense for Woodstock by the end of the month.

One byproduct of Thompson’s arrival has been an increase in wins and points.

Woodstock (9-6, 0-2 Region 4AAAAAAA) already has two more wins than all of last season, when it finished 7-19 overall and 3-7 in region play. The Wolverines are also averaging 63 points per game this season, 10 more than last season.

The past weekend, Woodstock won 72-69 in overtime at Rome on a buzzer-beating 3-pointer by Thompson. With the scored tied at 69-all, Thompson pulled up on a fast break and nailed a 3 from the top of the key as time expired.

“I was looking at the clock, and I knew I was either going to take it to the basket or pull up,” Thompson said. “The clock hit about 3 seconds, and I decided to pull up. I knew it was going in as soon as it left my hands.”

A midseason loss to King’s Academy, in which Woodstock led 40-19 at halftime, galvanized the locker room according to Thompson. Following two straight losses to open region play, the Wolverines have won four straight. A region game at Lassiter (9-6, 0-2) on Friday, followed by a road test at archrival Etowah (10-4, 2-0) on Tuesday, should go a long way to determining the playoff positioning for the Wolverines.

Thompson’s ability to penetrate a defense to score himself, or facilitate offense for his teammates, has been apparent since the opening week of the season.

Pierce said he has given Thompson full reign of the offense and added transitioning the new player into the team’s dynamic could not have gone any more smoothly.

“It was already in him because he’s a great leader,” Pierce said. “He says that I brought it out, but, really, he already had it.”

With only nine regular-season games left, Thompson he wants to do everything necessary to take advantage of his situation. Hopes of playing at the next level are in his mind, but he is also grateful for his current situation.

“I’m trying to enjoy every moment because I’m not getting this back,” Thompson said. “Nobody expects us to win the region championship, but why not us? We want to work to prove to everyone that we’re the best team in the region, and I think that’s what we can do.

“Basketball is fun to me again. I don’t think I’d be doing what I’ve been doing if I was still at Kell. I’m thankful I came to Woodstock, and for coach JP giving me a chance.”