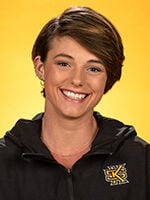 Looking to qualify for her second straight Olympics, Cobb County native Kendell Williams ranked third after the first four legs of the heptathlon Saturday at the U.S. Olympic trials in Eugene, Oregon.

The 26-year-old Williams, the only one of the three Americans to compete in the 2016 Olympic heptathlon in Rio de Janeiro still active, began the day with a fifth-place showing in the 100-meter hurdles (12.95 seconds), then moved into third overall with a runner-up finish in the high jump (6 feet, ½ inch).

Williams maintained her third-place overall standing through her final two events of the day, finishing seventh in the shot put (43-½) and third in the 200 dash (23.51).

The heptathlon competition will conclude Sunday with the long jump, javelin and 800 run.

The top three finishers will qualify for this summer's Olympics in Tokyo. Williams has a 12-point edge over fourth-place heptathlete Erica Bougard.

Williams is the second of two siblings to compete at the two-week Olympic trials. Her older brother, fellow Kell and Georgia alum Devon Williams, competed in the decathlon before withdrawing following the fourth leg.

Kendell Williams finished 17th at the 2016 Olympics, following a decorated college career in which she won seven national championships in the indoor pentathlon and outdoor heptathlon.

Gray, who finished second in the pentathlon at the NCAA indoor championships and seventh in the outdoor heptathlon as a redshirt senior at Kennesaw State in 2019, saw her best showing in the shot put Saturday.

If Williams qualifies for the Olympics, she would become the third Cobb County native on Team USA for the Tokyo Games, following Marietta natives Daniel Haugh (hammer throw) and Emily Sonnett (soccer). Kennesaw native Jane Campbell is also traveling to Tokyo as an alternate for the women's soccer team.

Matt Simpson, a Smyrna native and Whitefield Academy graduate, is traveling to the Tokyo Paralympics as a member of Team USA in goalball.