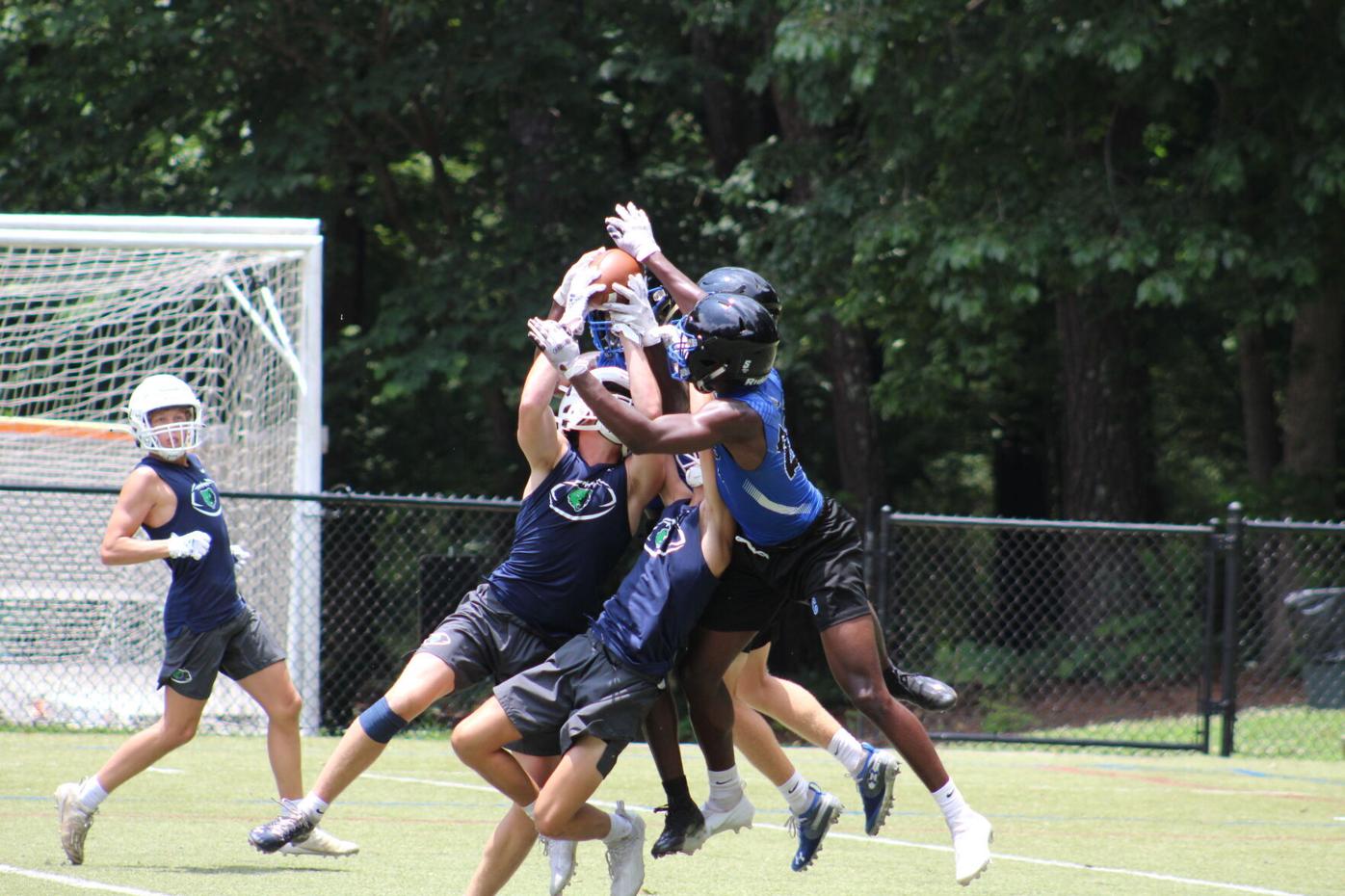 Creekview players contend for a reception in the Corky Kell 7-on-7 tournament in Roswell on Friday. 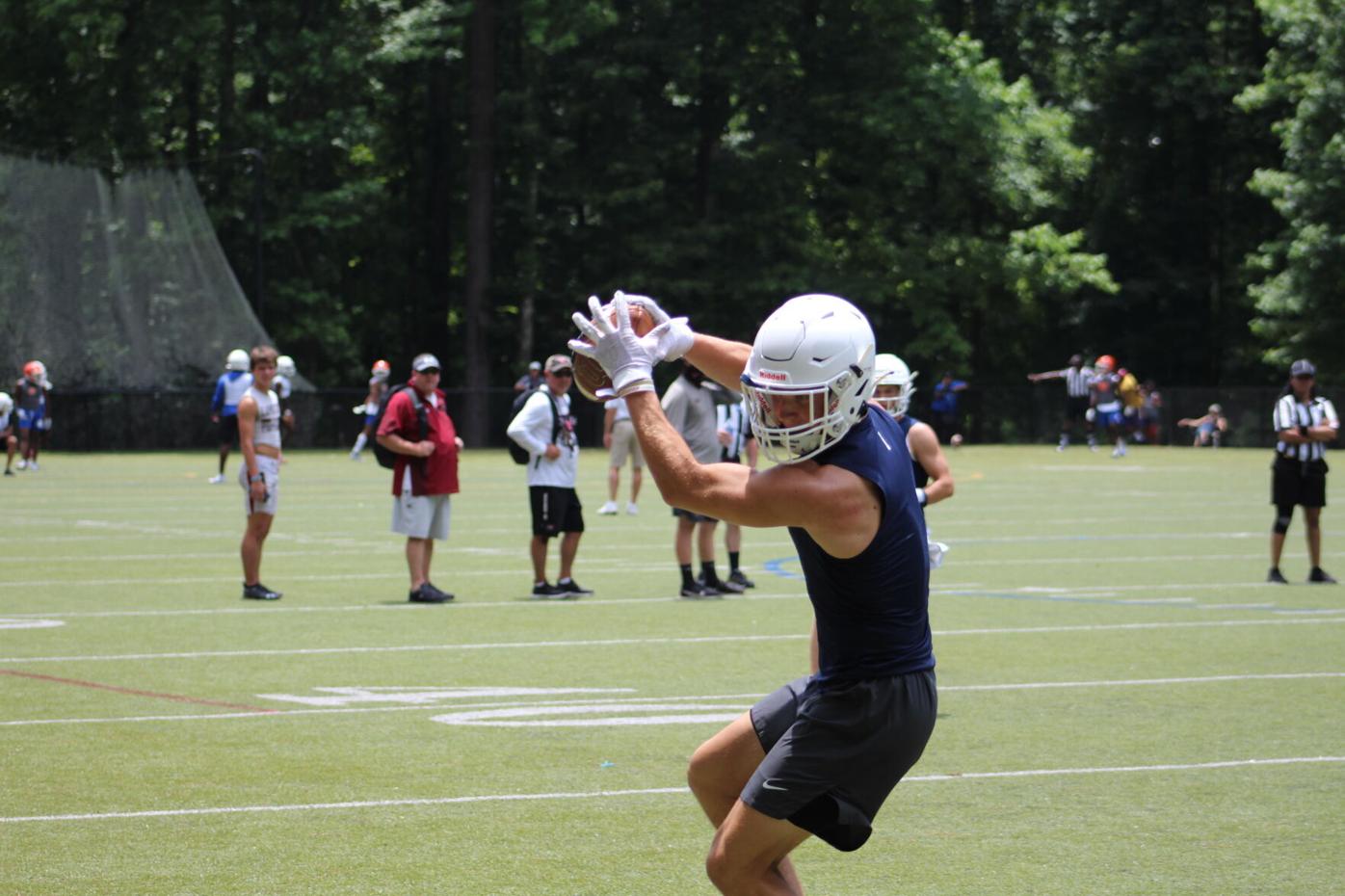 Creekview players contend for a reception in the Corky Kell 7-on-7 tournament in Roswell on Friday.

ROSWELL — Cherokee led the way as three county teams competed in the Corky Kell 7-on-7 tournament on Friday.

Quarterback AJ Swann led the Warriors to a 5-0 run during the tournament before it was called off because of weather. The three-star Maryland commit said he felt it was a good showing from his team.

“We felt pretty good as a group,” Swann said. “As a team, we were getting our stuff done.”

Cherokee won all four of its pod games to earn the sixth seed in the single-elimination tournament bracket. After receiving a first-round bye, the Warriors beat Centennial 26-10 in the second round.

Swann threw three touchdown passes in the victory, but the Warriors’ quarterfinal game against Marietta was not played due to the weather.

With the event ending early, the highest remaining seeded team, Westlake, was declared the tournament champion.

Despite the sudden ending, Cherokee coach Josh Shaw said he saw a lot of encouraging signs from his team on the field.

“We just kept executing our plays. Our quarterback put our players in position to make catches, and our guys made plays,” Shaw said, “I was also really encouraged about our defensive secondary. We were able to communicate and get one stop at a time.”

Joining Cherokee in the 45-team event at Roswell Area Park were River Ridge and Creekview.

The Knights faced Pepperell in the first round of tournament play. After giving up an interception and finding themselves behind early, they battled back to win 30-23 in overtime.

River Ridge faced another deficit in Round 2 as it trailed by 16 points to Christian Heritage. The Knights tied the game at 16-all, but the Lions retook the lead.

River Ridge intercepted a pass in the final seconds, but it fell 24-19 to end its run.

Knights coach Michael Collins said he felt like he learned a lot about his team.

“We are a very gritty football team.” he said. “We showed no signs of giving up and stood our ground in times of adversity. It was a great opportunity for our team to come together.”

Creekview also went 2-2 in pod play. It beat Roswell and North Forsyth, but lost to Collins Hill and Creekside.

The Grizzlies faced Centennial for the opportunity to face Cherokee in the second round. Interceptions took their toll on Creekview as it threw three over the course of the game, but the defense was impressive, keeping the Grizzlies in the game.

Trailing by two points late, Creekview had one final shot to the end zone to pull out the victory. The ball was intercepted on the final play, giving Centennial a 20-15 victory.

Cherokee County agrees to settlement on rezoning for 230 apartments, 90 townhomes