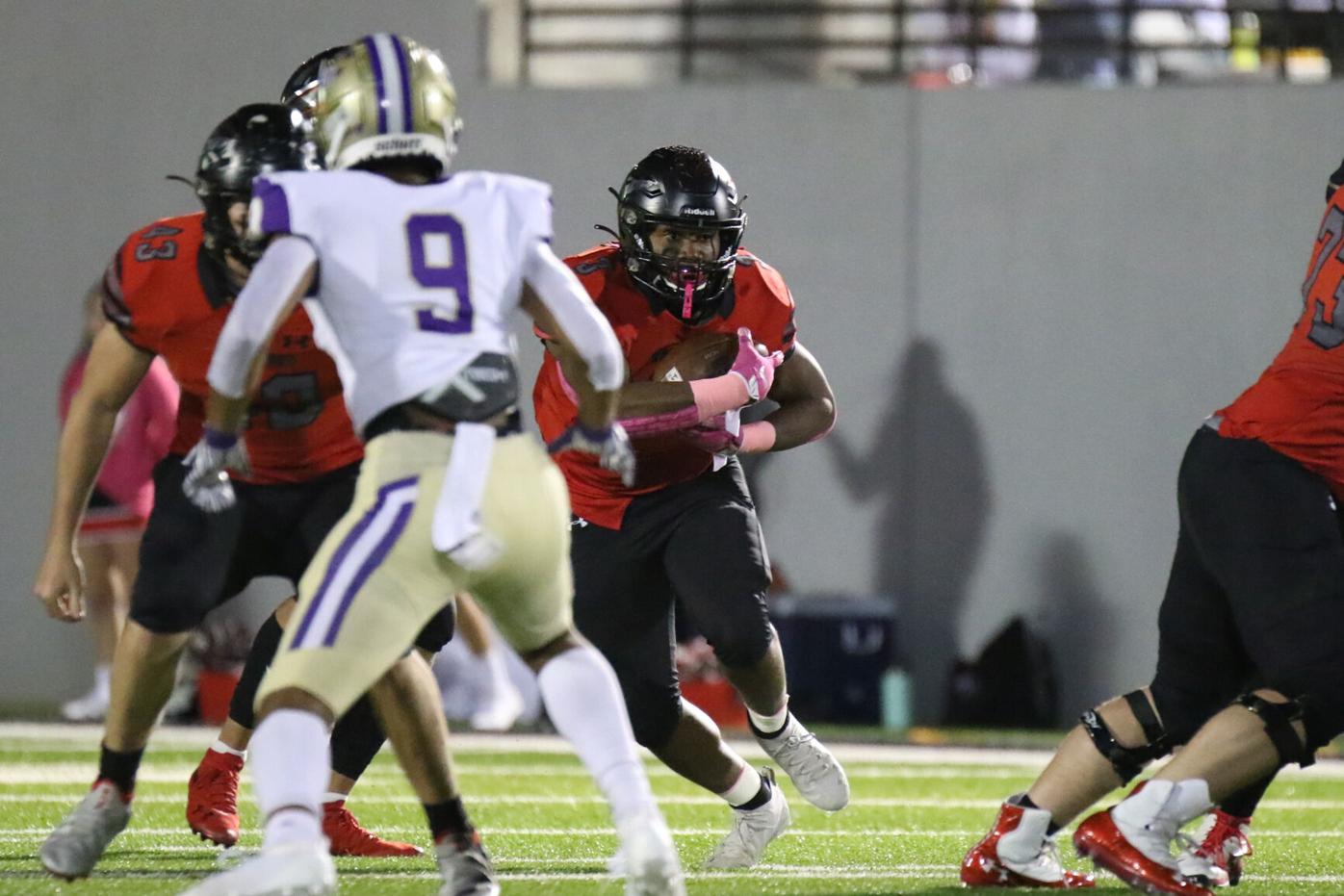 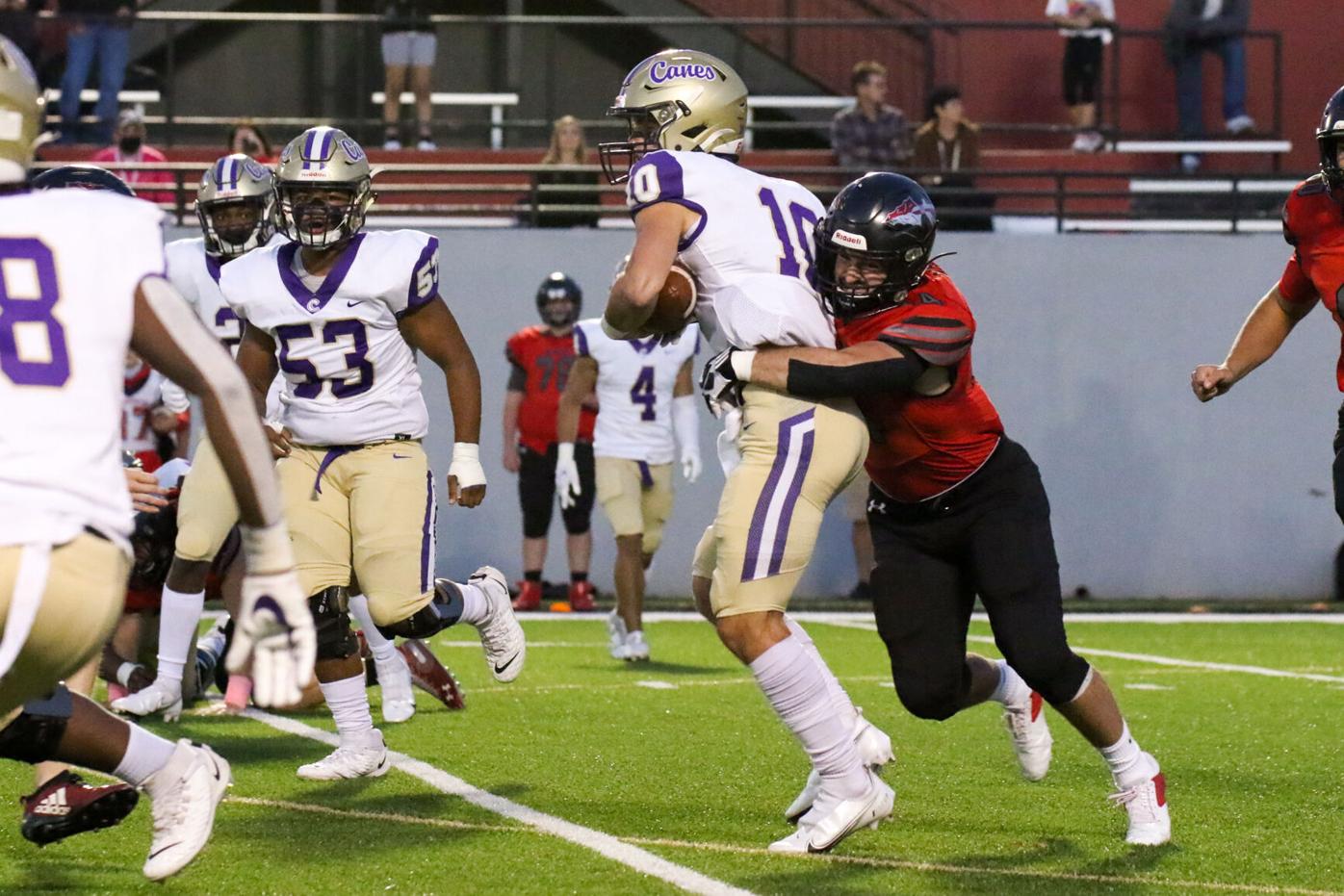 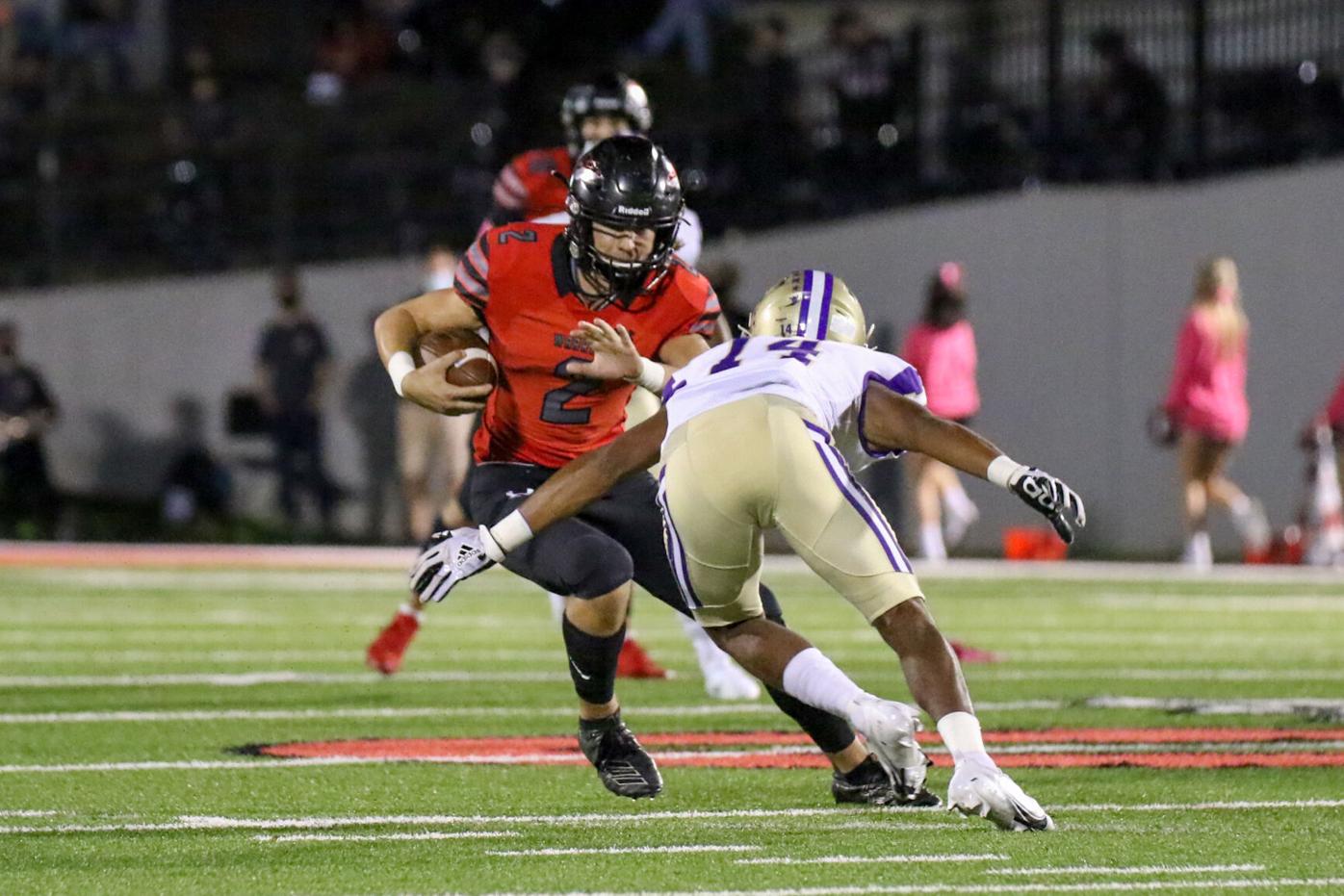 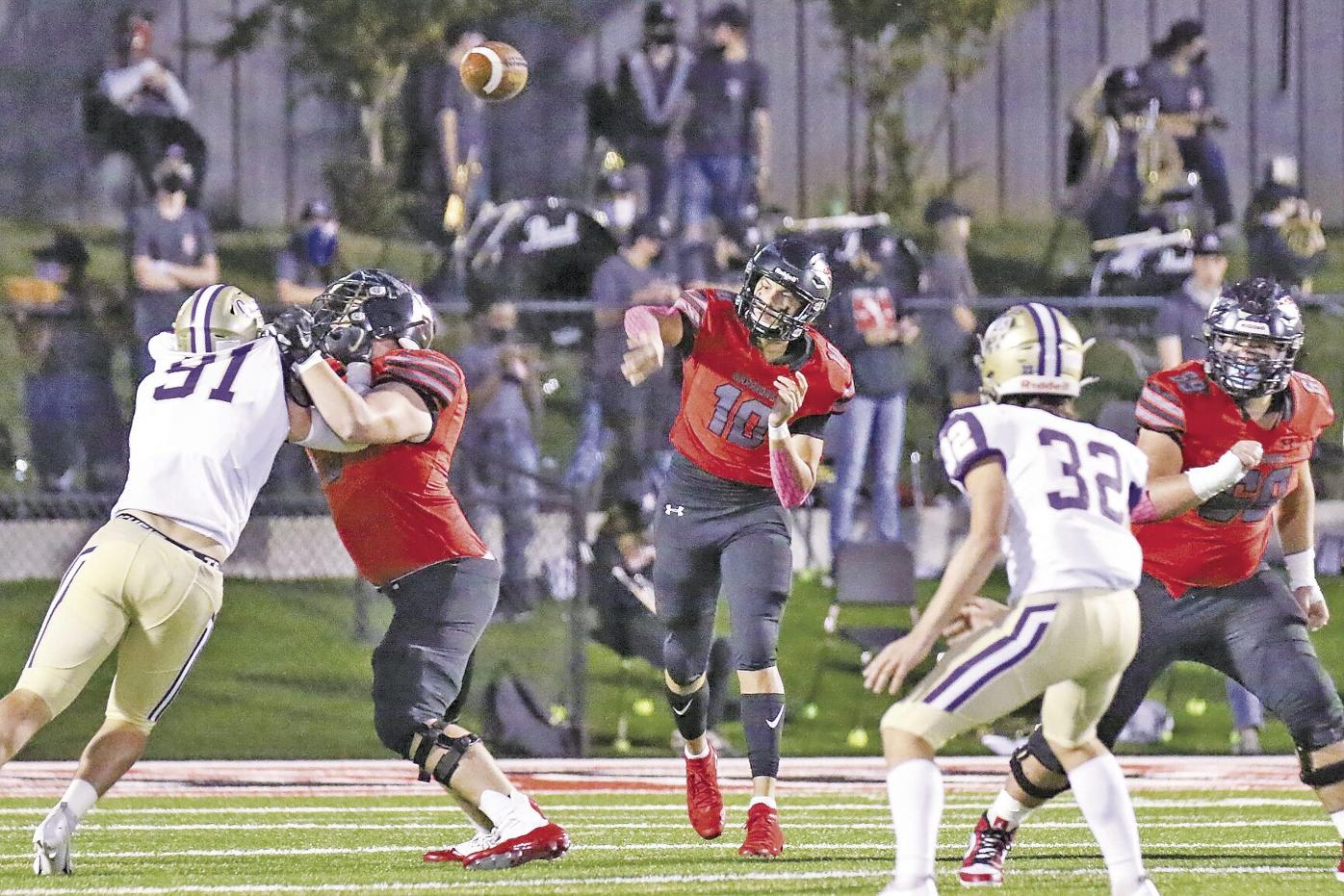 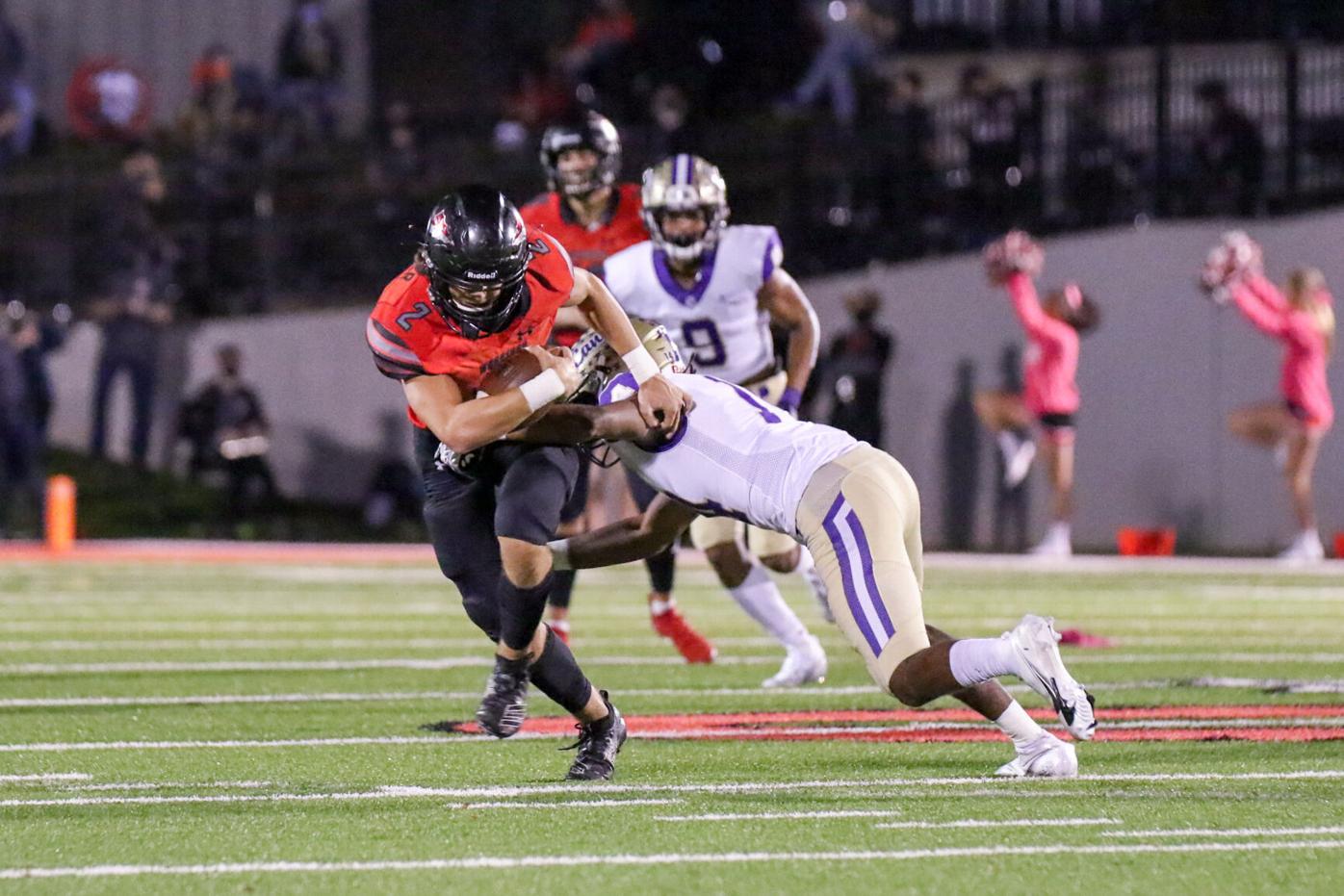 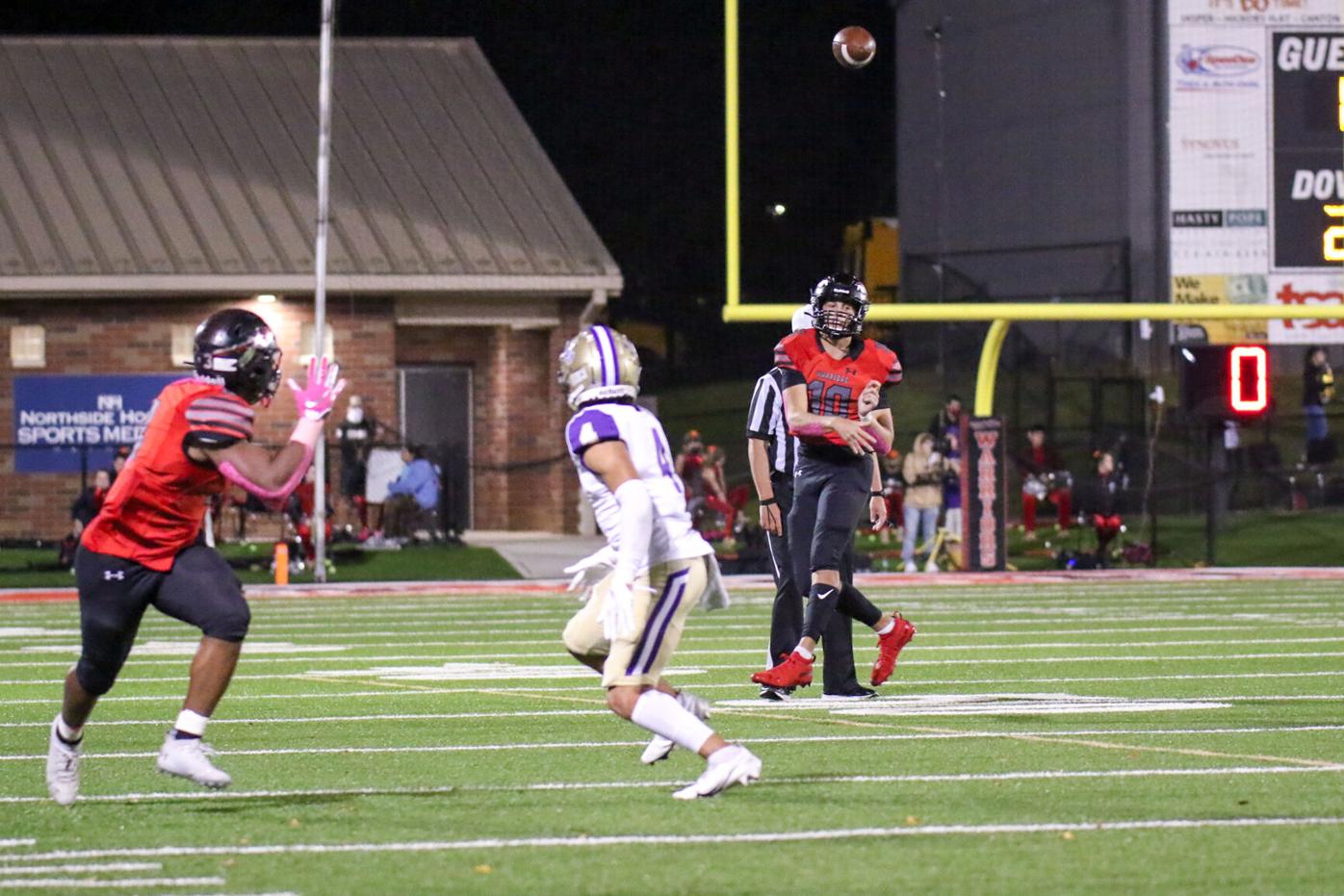 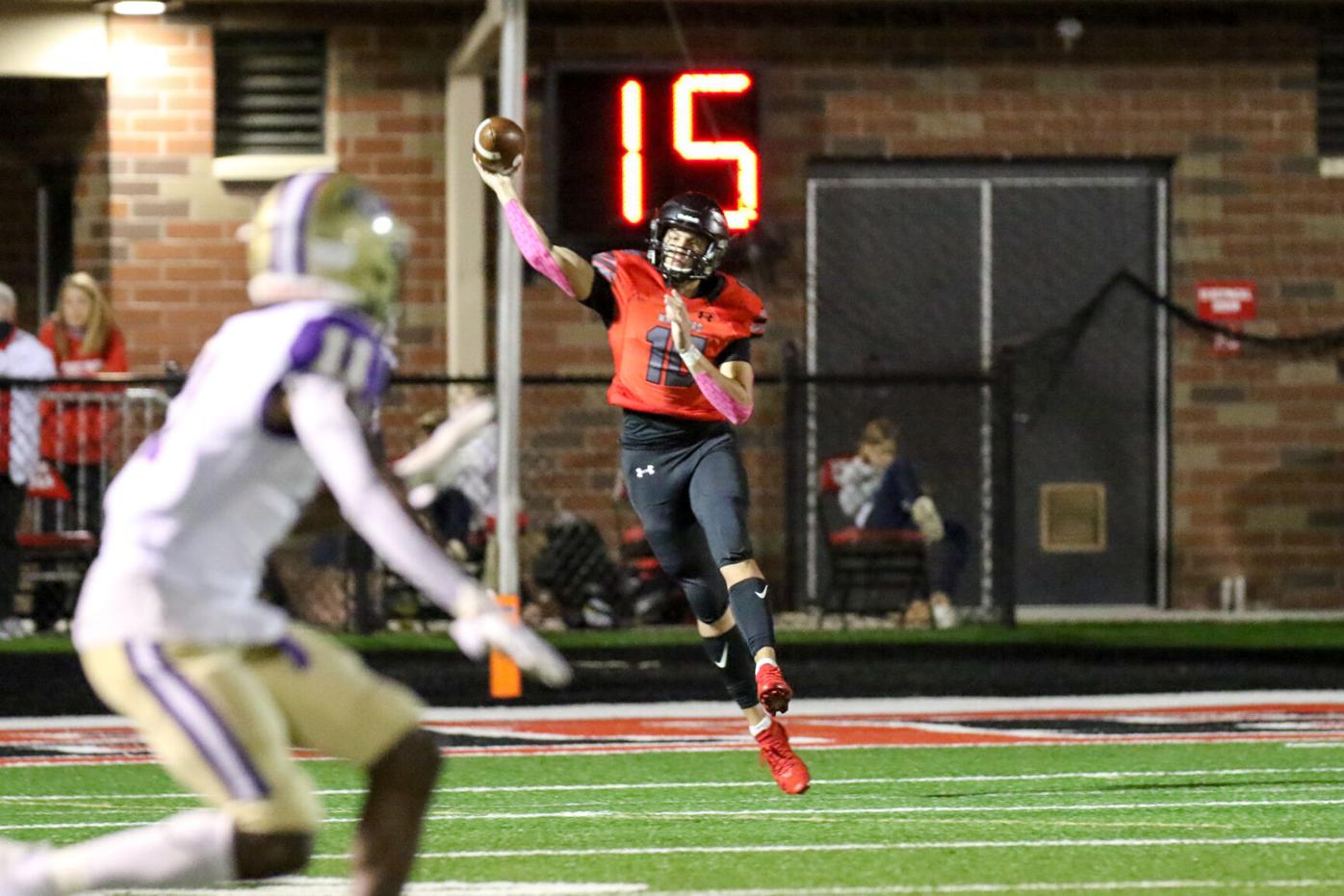 AJ Swann with the pass on the run 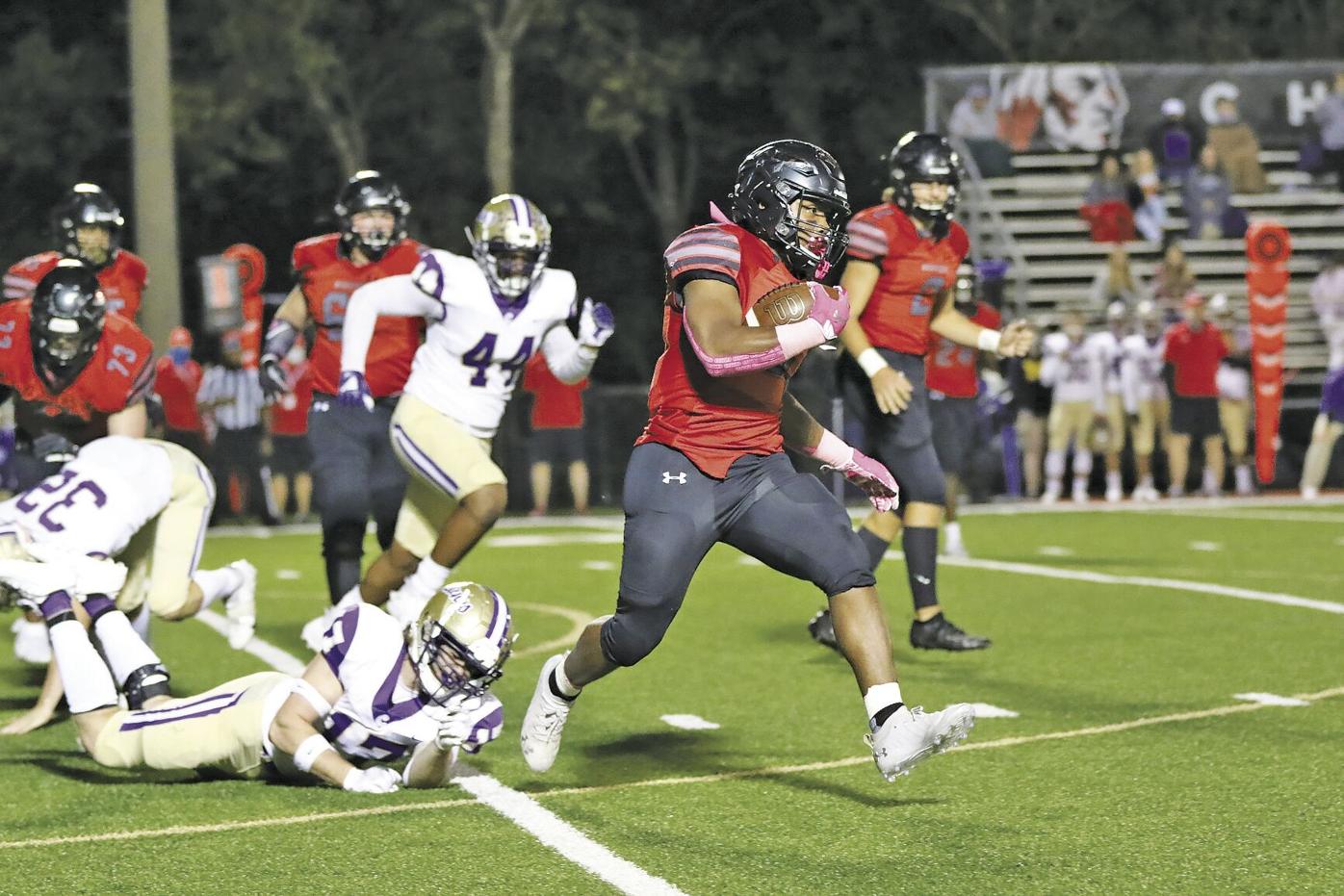 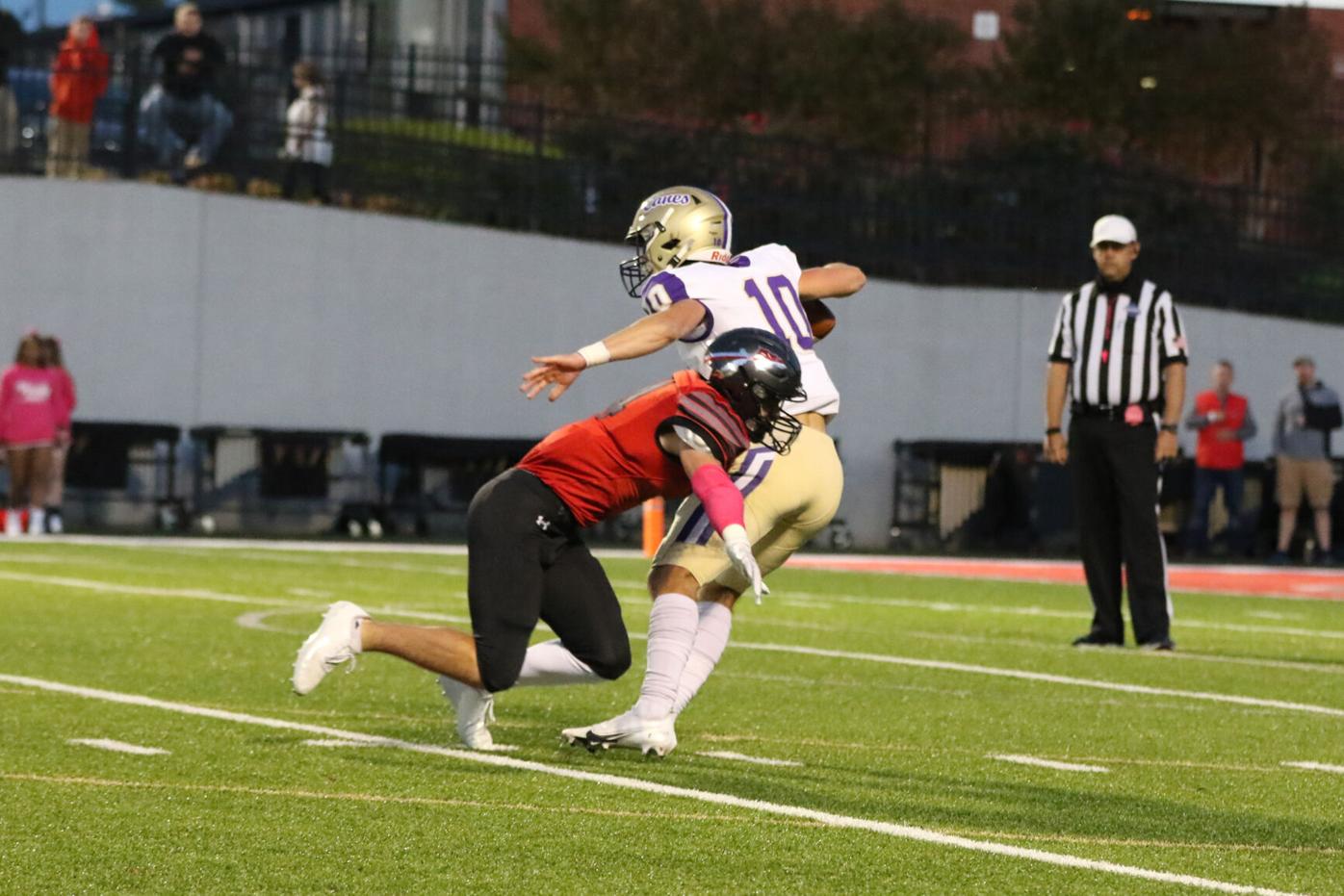 Tyler Goddard with the pressure on Cartersville's Stratton Tripp 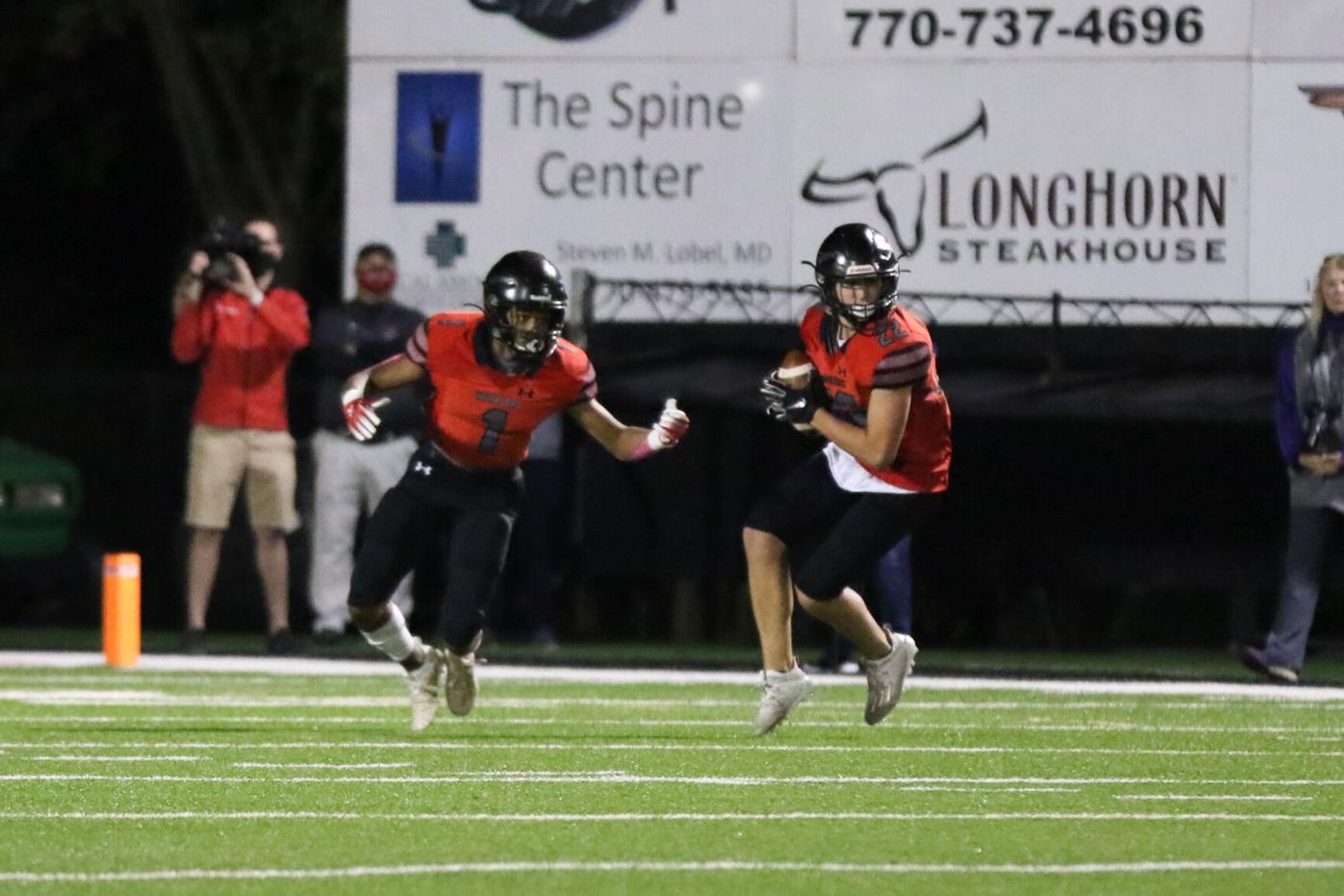 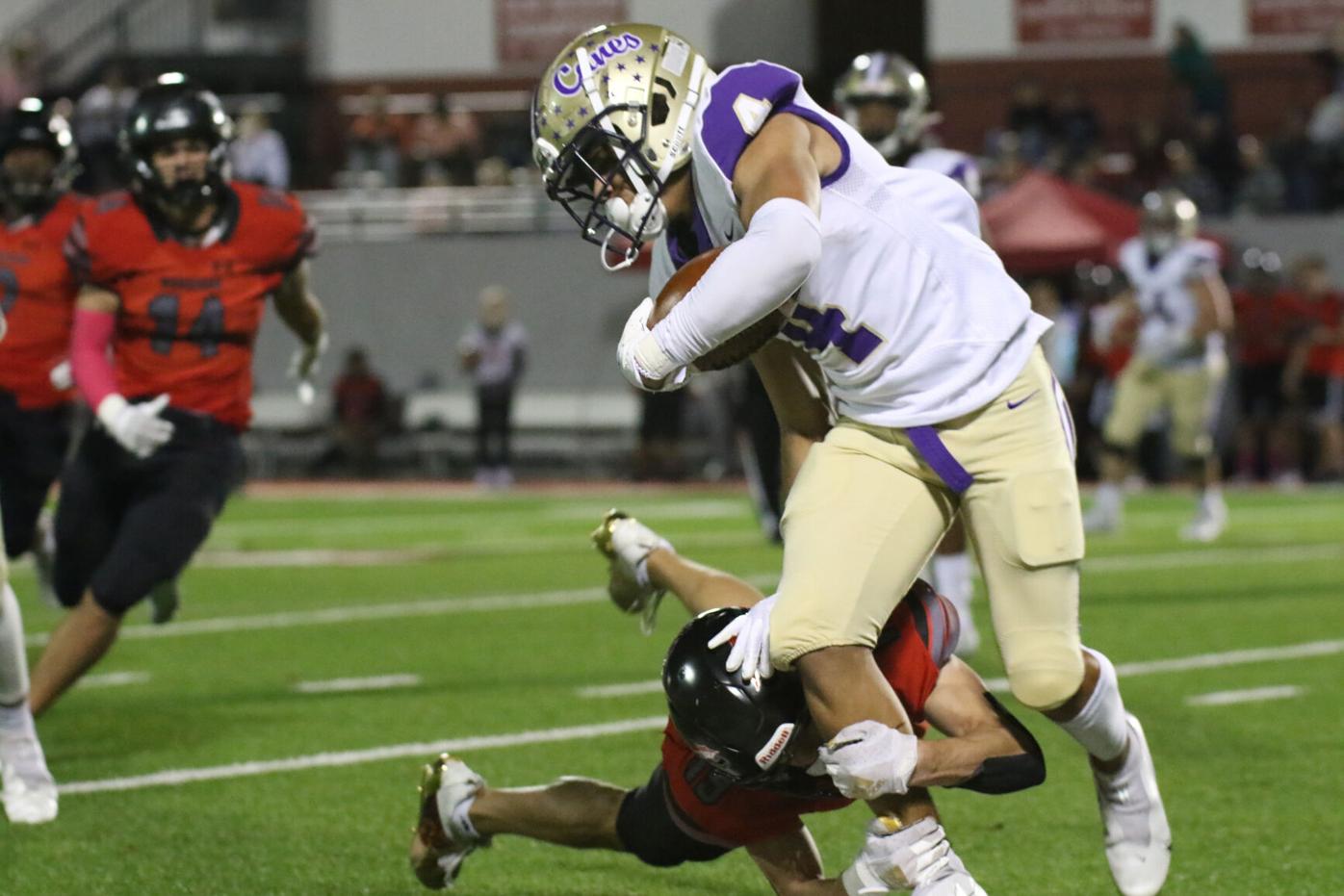 Riley Lyons with the tackle in the backfield

AJ Swann with the pass on the run

Tyler Goddard with the pressure on Cartersville's Stratton Tripp

Riley Lyons with the tackle in the backfield

Cherokee defeated Cartersville 14-12 behind its defense and running game and in the process ended Cartersville’s 62-game regular season winning streak.

The Warriors held on in the final seconds after Cartersville completed a fourth-down pass from midfield to the Cherokee 5, but the ball was fumbled after the catch and Cherokee (5-0) took a knee to complete the victory.

“We talk about making your mark and writing your story and that’s something I told them tonight,” Cherokee coach Josh Shaw said. “Our guys had a chance tonight to make another mark for this program. It’s something that no one will ever be able to take away from them, being the ones who stopped the longest streak in state history.”

Both defensed shined, but the majority of the scoring came in the final few minutes.

With Cherokee holding a 7-5 lead, running back Keith Adams Jr. seemed to put the finishing touch on a victory with his second score of the game, a 30-yard run with 2 minutes remaining. He finished the game with 155 rushing yards, 112 coming in the second half.

“I saw the corner motion with the receiver so I knew the right side was going to be wide open I just had to outrun them,” Adams said.

It wasn’t over, however, as Cartersville’s Devonte Ross took the ensuing kickoff back for a touchdown. Cherokee led 14-12 with a 1:30 to play. After a three-and-out, a muffed punt by Cherokee gave Cartersville the ball on the Cherokee 35-yard line with 51 seconds to go.

“We didn’t make it easy on ourselves,” Shaw said. “I mean how many mistakes did we make? Someone was shining down upon us and our kids just made the plays they needed to make to win the game.”

Cherokee survived the final second heave from Cartersville. In the defensive huddle during a final timeout, senior linebacker Braesen Parker said the defense wouldn’t let this game slip away.

“We knew we had played a heck of a game already and we knew we could stop them one more time,” Parker said. “This win is huge. I think it’ll put a stamp on Cherokee High School and we’re just gonna keep working every day.”

After a scoreless first quarter, Cartersville (4-1) got on the board first with a 20-yard field goal by Jesus Gutierrez. The Warriors were unable to find a rhythm offensively but the Hurricanes also struggled to move the ball and the teams went to the half with Cartersville leading 3-0.

Shaw said he challenged his offense to come out better in the third quarter and the Warriors responded. Behind Adams, Cherokee marched 90 yards on 15 plays and finished the drive when Adams scored on a run around the right side from 5 yards out. Joel Stahl’s extra point was good and Cherokee led 7-3 midway through the third.

“Coach (Shaw) was getting on us at halftime because he knew we should have been winning,” Adams said. “We’re a top-caliber team all around and I have faith in all my guys. It’s exciting to be able to back up my team.”

A safety cut the Warriors lead to 7-5. Cartersville had a chance to take the lead midway through the fourth quarter, but its field goal attempt was no good.