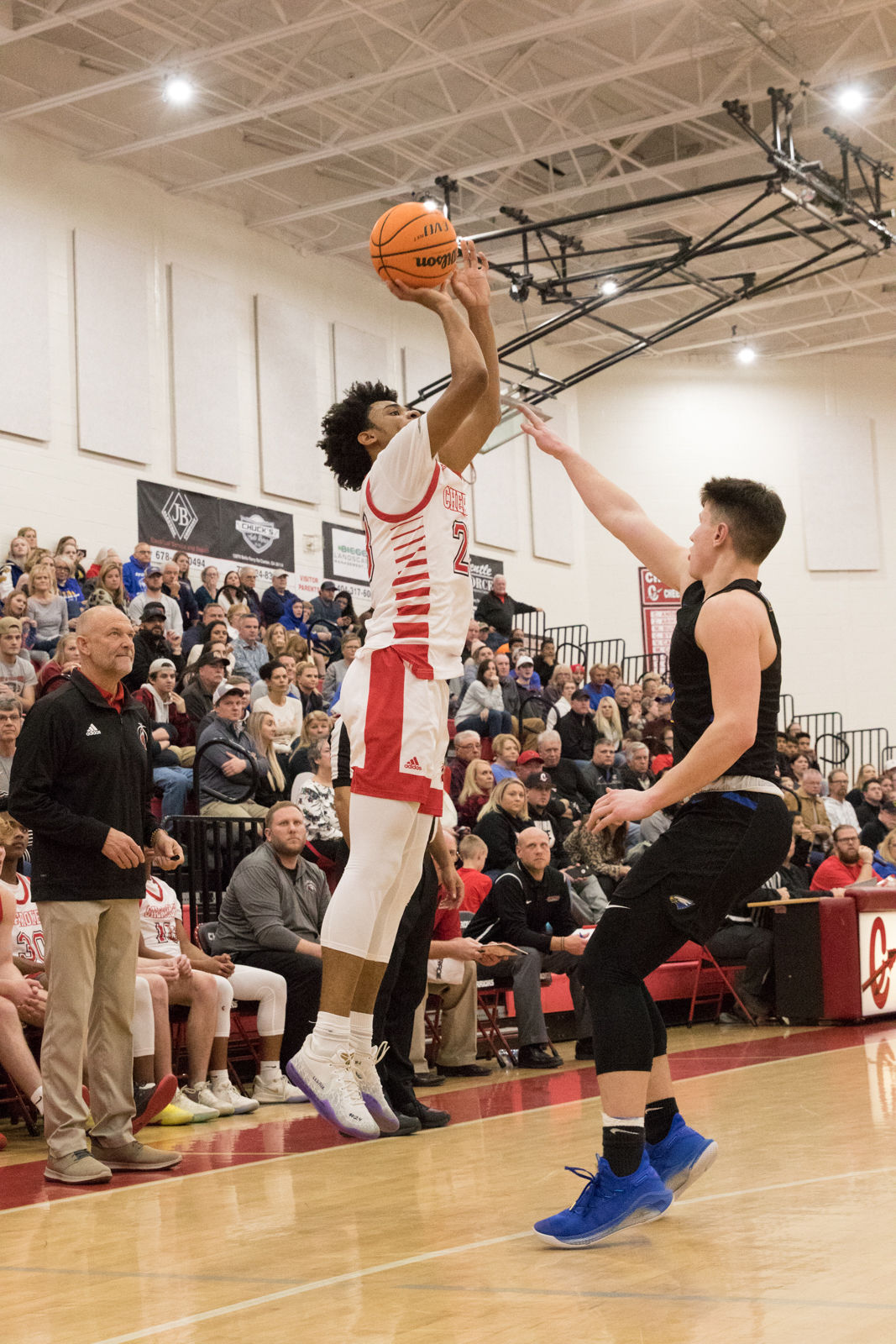 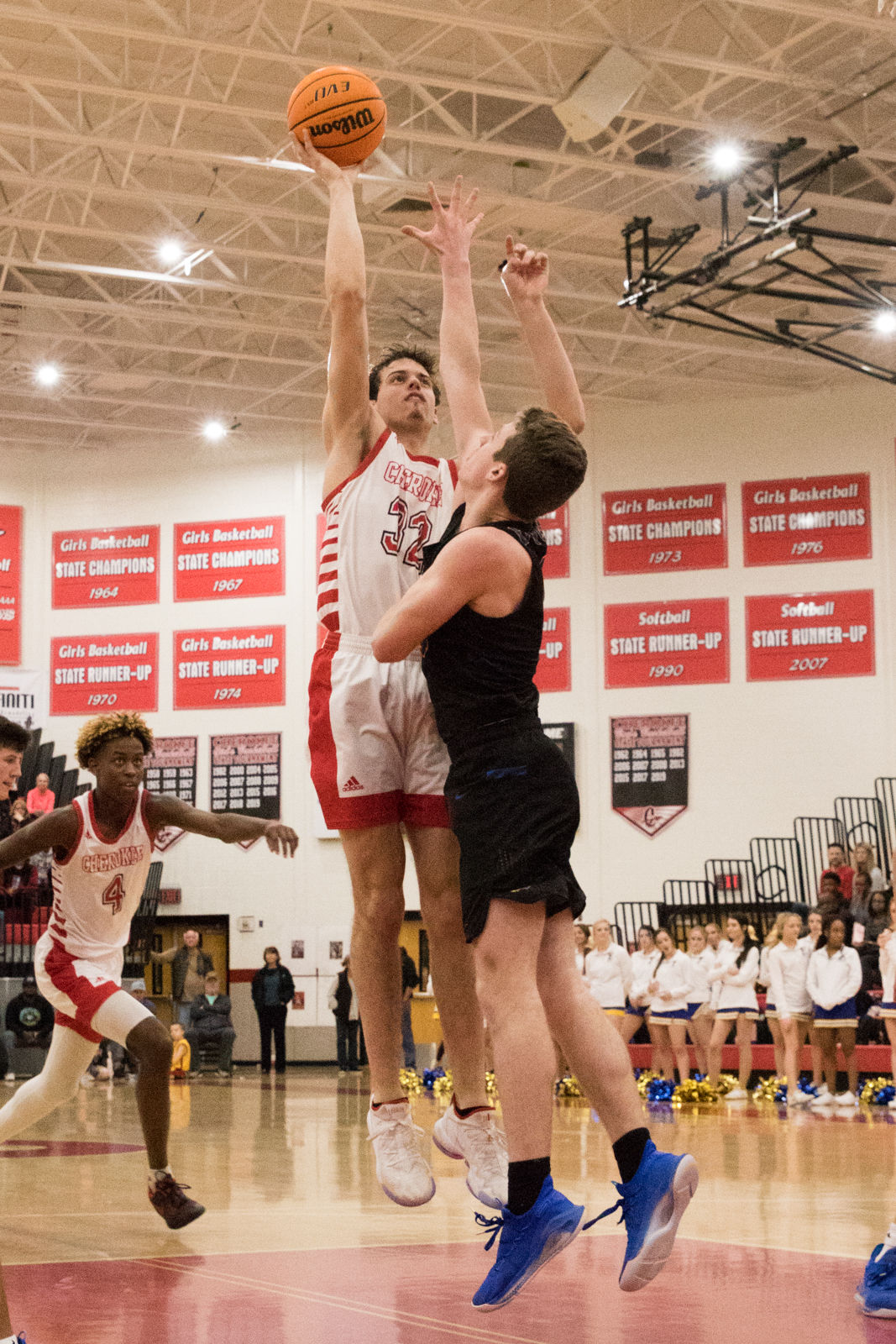 Cherokee senior Zack Vickers shoots a jump hook in the lane during Friday night’s win over Etowah in Canton. 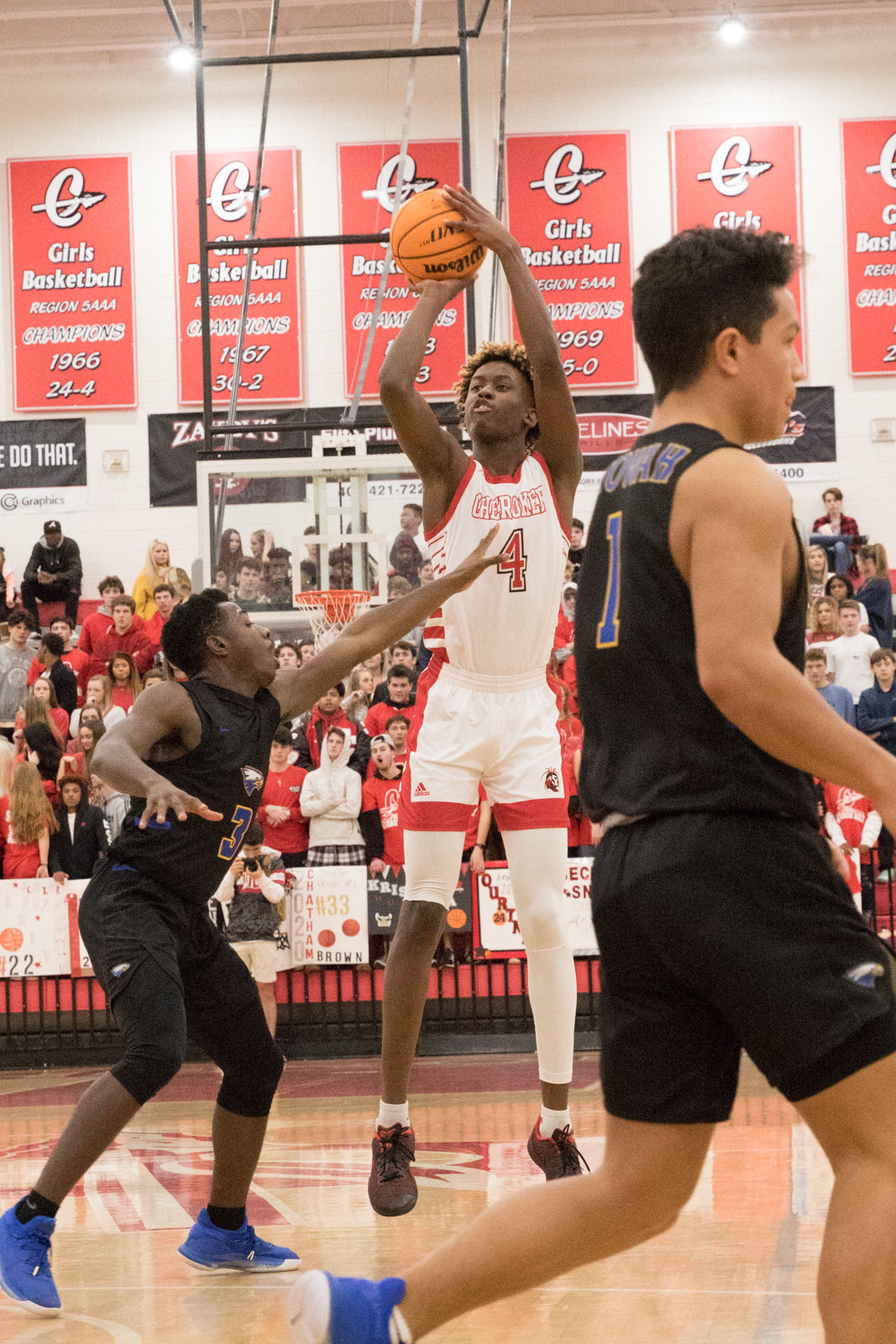 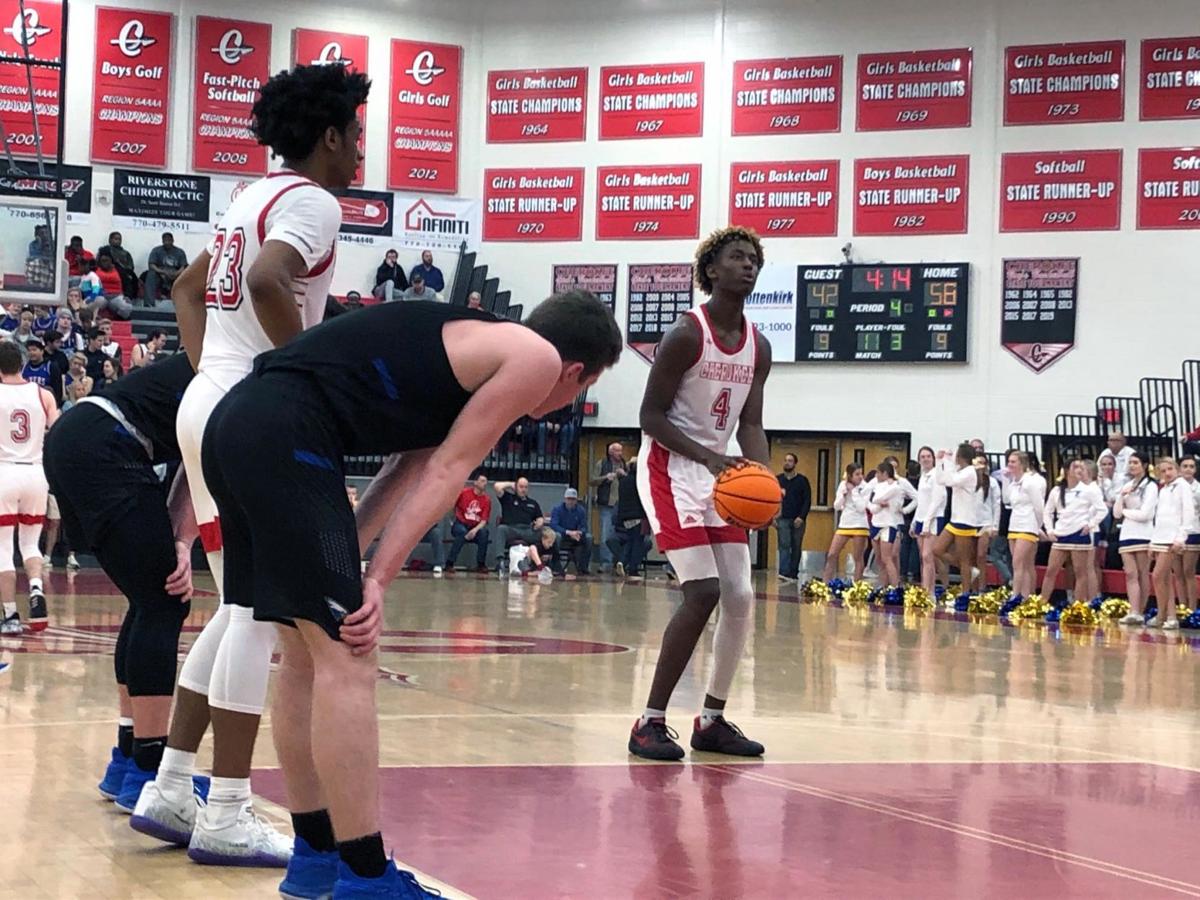 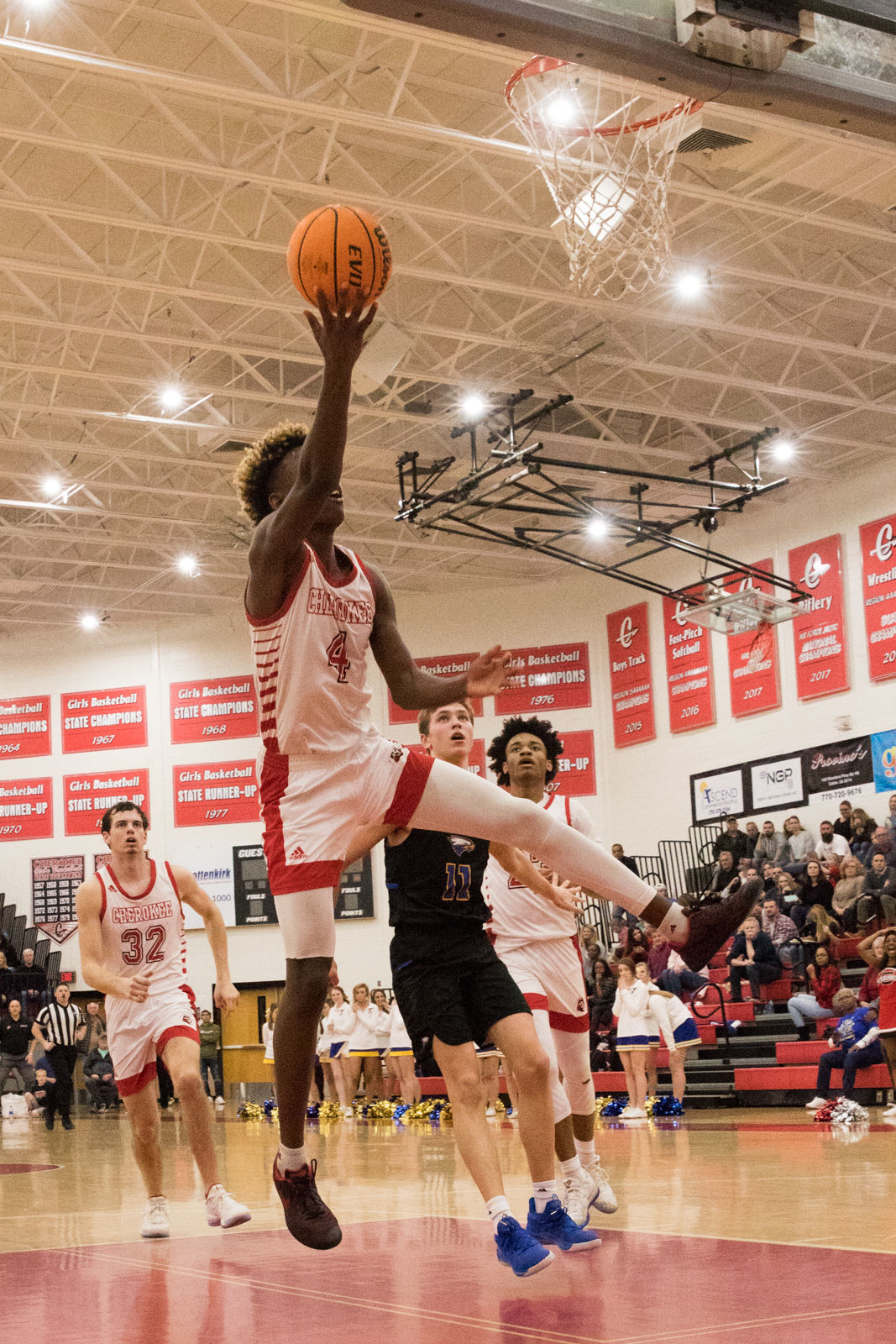 Cherokee senior Zack Vickers shoots a jump hook in the lane during Friday night’s win over Etowah in Canton.

CANTON — The first game between Cherokee and Etowah came down to the final few possessions but on Friday night the Warriors removed all doubt.

Playing at home on senior night, Cherokee defeated Etowah 69-50 in the final regular season game for both programs. With the win, Cherokee (21-4, 8-2) earned the No. 1 seed in this week’s Region 4AAAAAAA tournament while Etowah (17-6, 8-2) will take the No. 2 seed. The Warriors outscored Etowah 24-9 in the final quarter of Friday night’s game and will enter this week’s region tournament looking to win the first region championship in program history.

“I think a win like this will boost our confidence heading into the region tournament,” Cherokee senior Zach Vickers said. “Winning the regular season region title is a great accomplishment but playing defense like we did tonight, that’s what will get us far in this tournament we’re about to go into.”

Points were hard to come by in the first matchup between these two teams, but both teams came out firing in the rematch. Etowah was without starting forward Colby Flaig, who was out due to illness, and beginning in the first quarter Cherokee used its size and length to gain an advantage on both ends. The Warriors defense pressured Etowah into turnovers which led to fast break opportunities and junior guard Bennett Ulm was quick to capitalize on his opportunities, scoring six points in the first few minutes.

“I thought Bennett was huge tonight,” Cherokee coach Roger Kvam said. “His scoring in the first half kind of broke the game open a little bit but they crept back because they’re not ever gonna go down easy.”

Cherokee’s Bennett Ulm with the steal and finish on the other end. Ulm has six early points.3:45 left in first @CHS_Warriors 11@EtowahHoops 7 pic.twitter.com/SHqAEgixyh

Etowah knocked down four 3-pointers in the first quarter with Cole Ellis, Mason Etter and Brock Rechsteiner. Etter connected on a corner 3-pointer in the final seconds of the first but Cherokee’s Taihland Owens answered seconds later with a buzzer-beating 3-pointer of his own to close out the first.

The trio of Owens, Elijah Tucker and Vickers has carried Cherokee all season and Friday was no exception. Owens finished with a game-high 23 points on 8-for-15 shooting while Tucker recorded a double-double with 17 points and 10 rebounds. Vickers finished with 11 points, five rebounds, four assists and two steals.

“I think we have the two best players in the region which is a huge advantage for us,” Kvam said. “They don’t have as much size as us but they make up for it with their toughness. It’s just physical basketball. I have a lot of respect for Etowah’s coach and their players for how hard they play.”

Cherokee junior Jonathan Sweeney scored no points against Etowah, but the 6-foot-6-inch junior provided added defensive length for the Warriors off the bench. One of Sweeney’s two blocks led to a 3-pointer by Tucker moments later and Owens also continued to find his rhythm in transition.

Will Garvey, who led the Eagles with 17 points along with six rebounds and three steals, was once again the most reliable player for Etowah. A basket followed by a pair of free throws cut into the Cherokee lead late in the second quarter and the Warriors took a 37-25 lead into halftime.

“They do a good job of collapsing on our drives,” Etowah coach Jason Designer said. “They just made plays and we didn’t and sometimes that’s just how it is. None of us are really upset about this one because the No. 1 or No. 2 seed doesn’t really matter to us. We’ve been here before and we’re where we are because we do what we do. We’re ready for the tournament.”

End of third @CHS_Warriors 45@EtowahHoops 41Nice job by Etowah to pull back into this one. No. 1 seed in Region 4AAAAAAAA tourney on the line. pic.twitter.com/6vBge9zRs5

Cherokee scored eight points in the third quarter but once the final quarter began Tucker asserted himself and took control of the game.

The 6-foot-7-inch junior scored back-to-back baskets to open the fourth quarter and finished with nine points during Cherokee’s 19-1 run to open the final period.

Following the onslaught, the Warriors led 64-42 and cruised to victory during the final minutes.

“I still feel like we have our basketball ahead of us,” Kvam said. “These 25 game have gone by so quickly and honestly this region tournament is wide open from my perspective. All the teams have good players, are well coached and have good plans so for us it’s whether we meet the challenge.”

FINAL@CHS_Warriors 69@EtowahHoops 50Cherokee improves to 21-4, 8-2 while Etowah drops to 17-6, 8-2.Cherokee will have the No. 1 seed in the region tournament, Etowah will have the No. 2 seed. Both will have first round byes. pic.twitter.com/nlPk0FKAQn