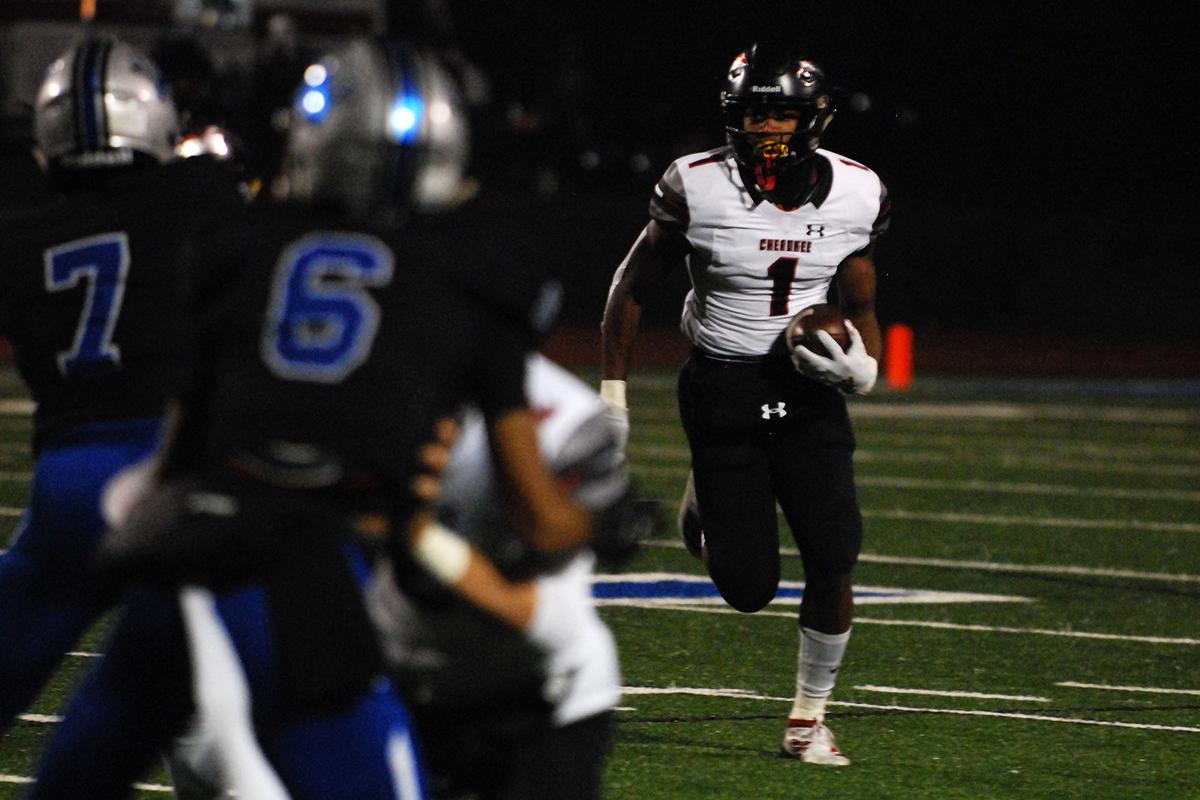 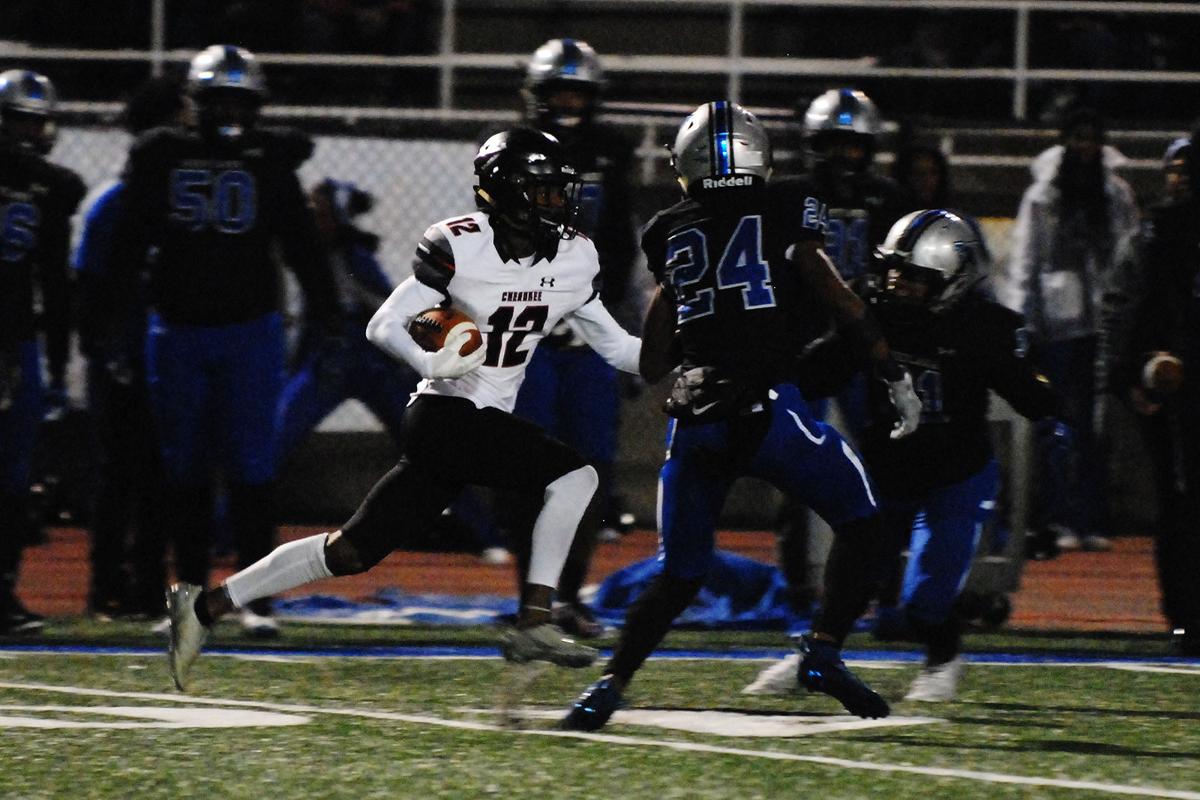 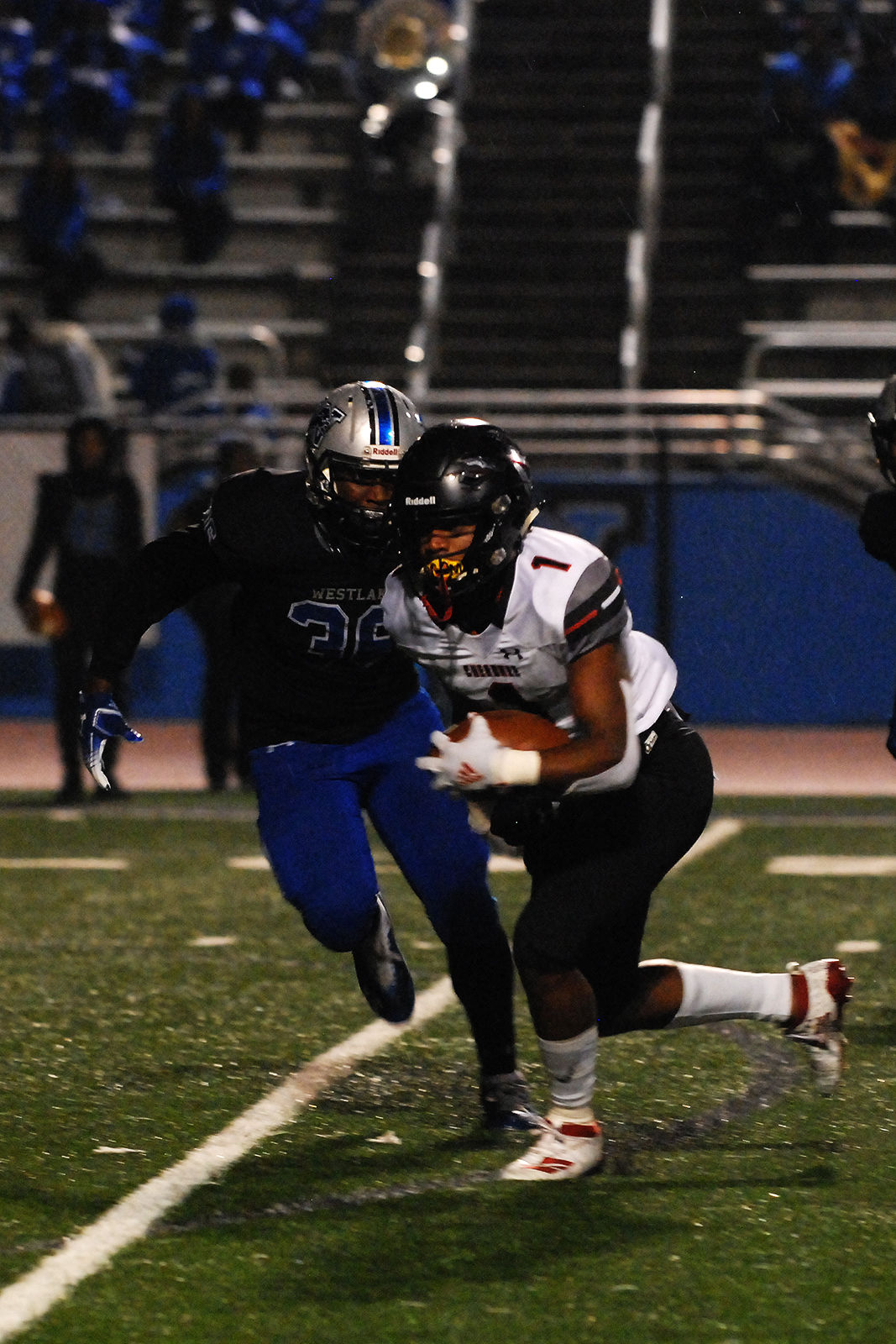 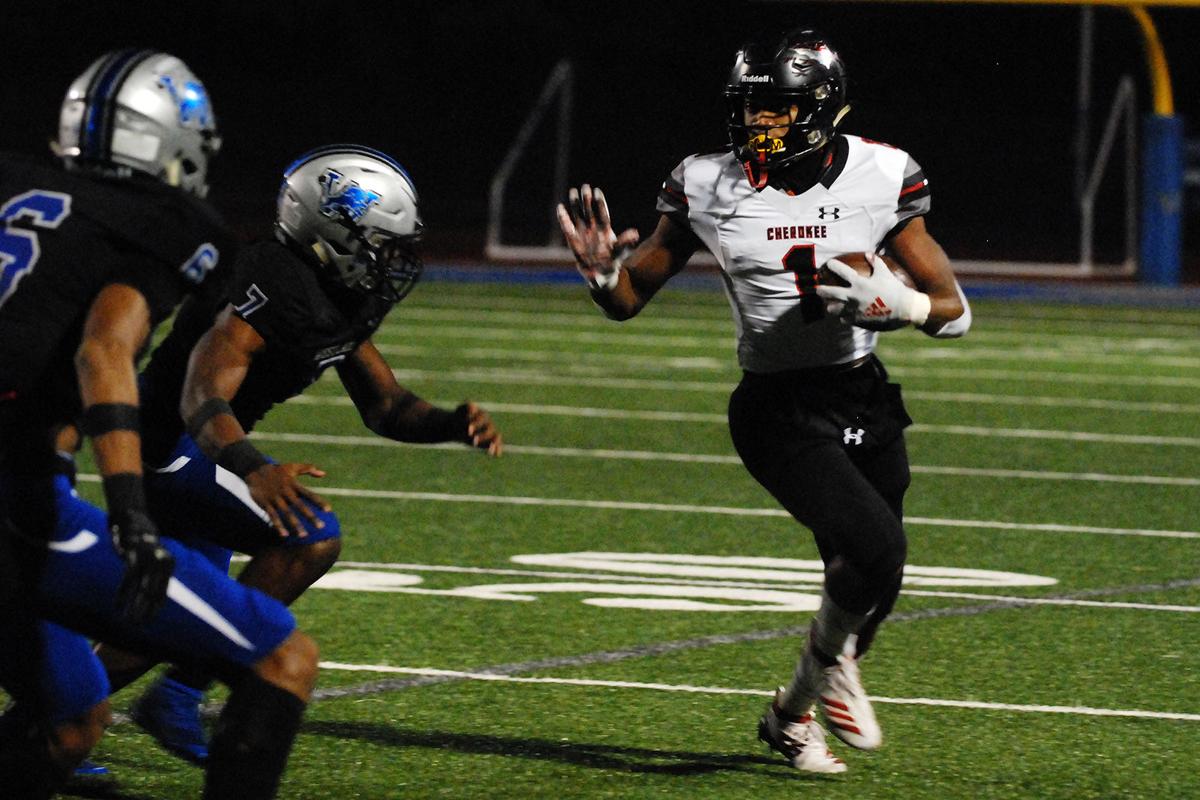 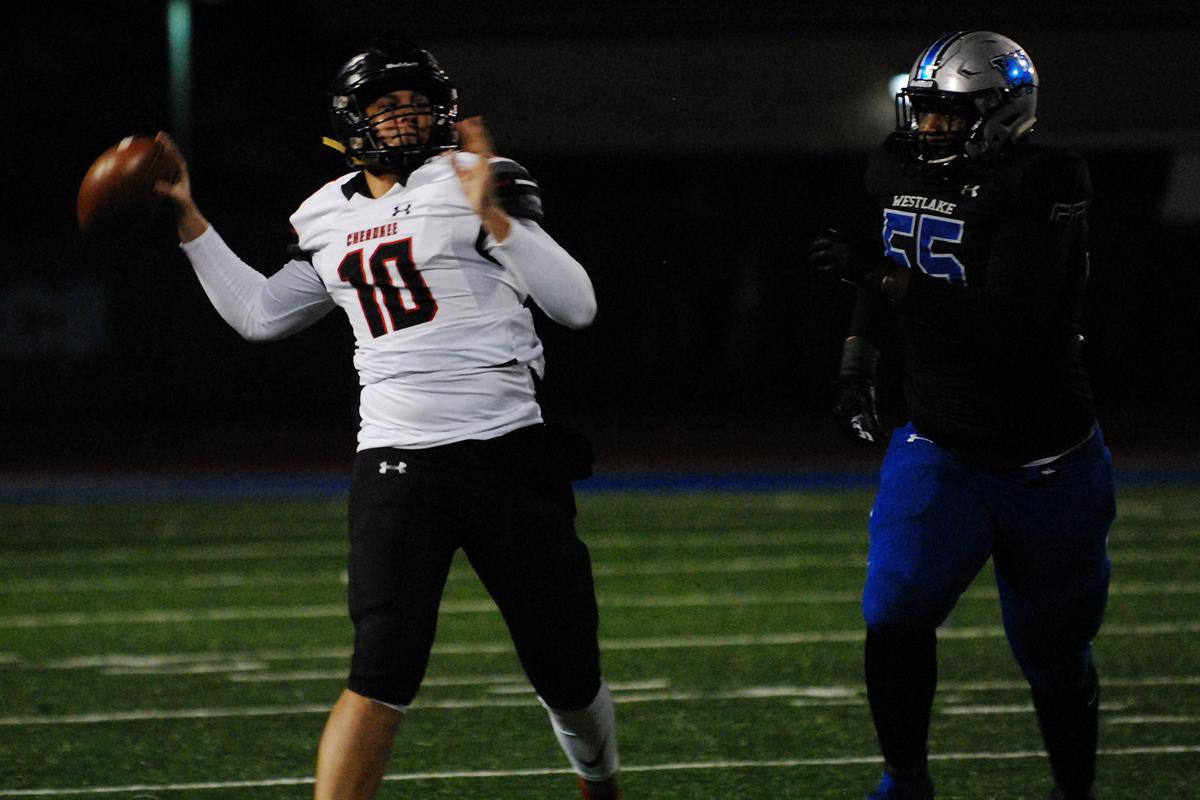 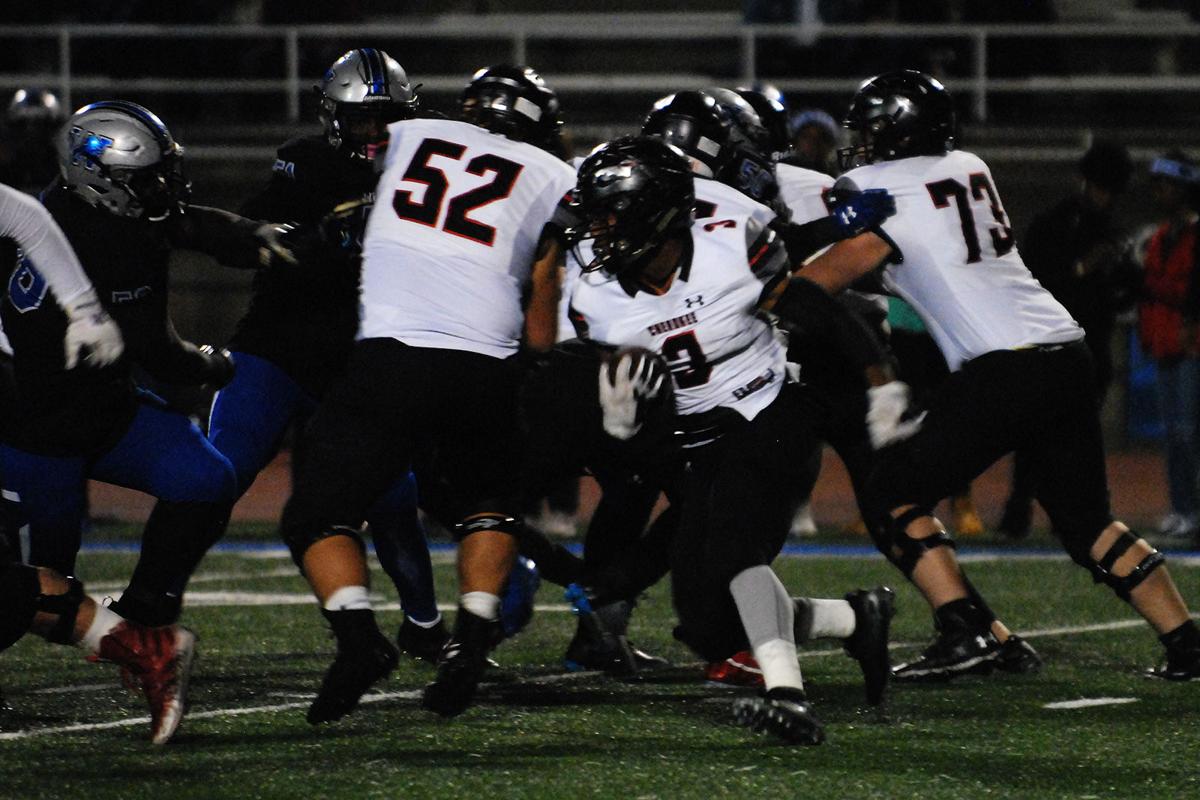 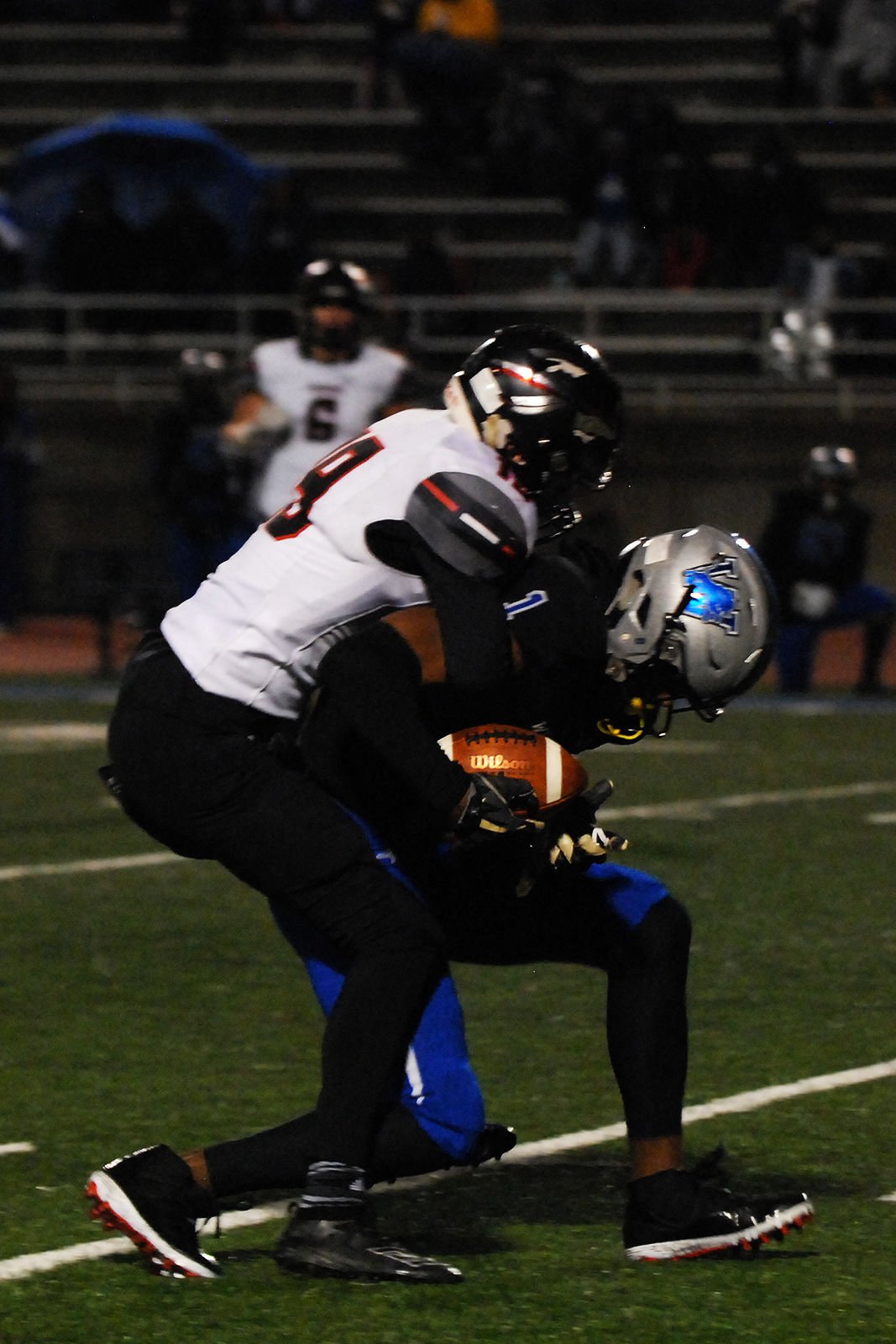 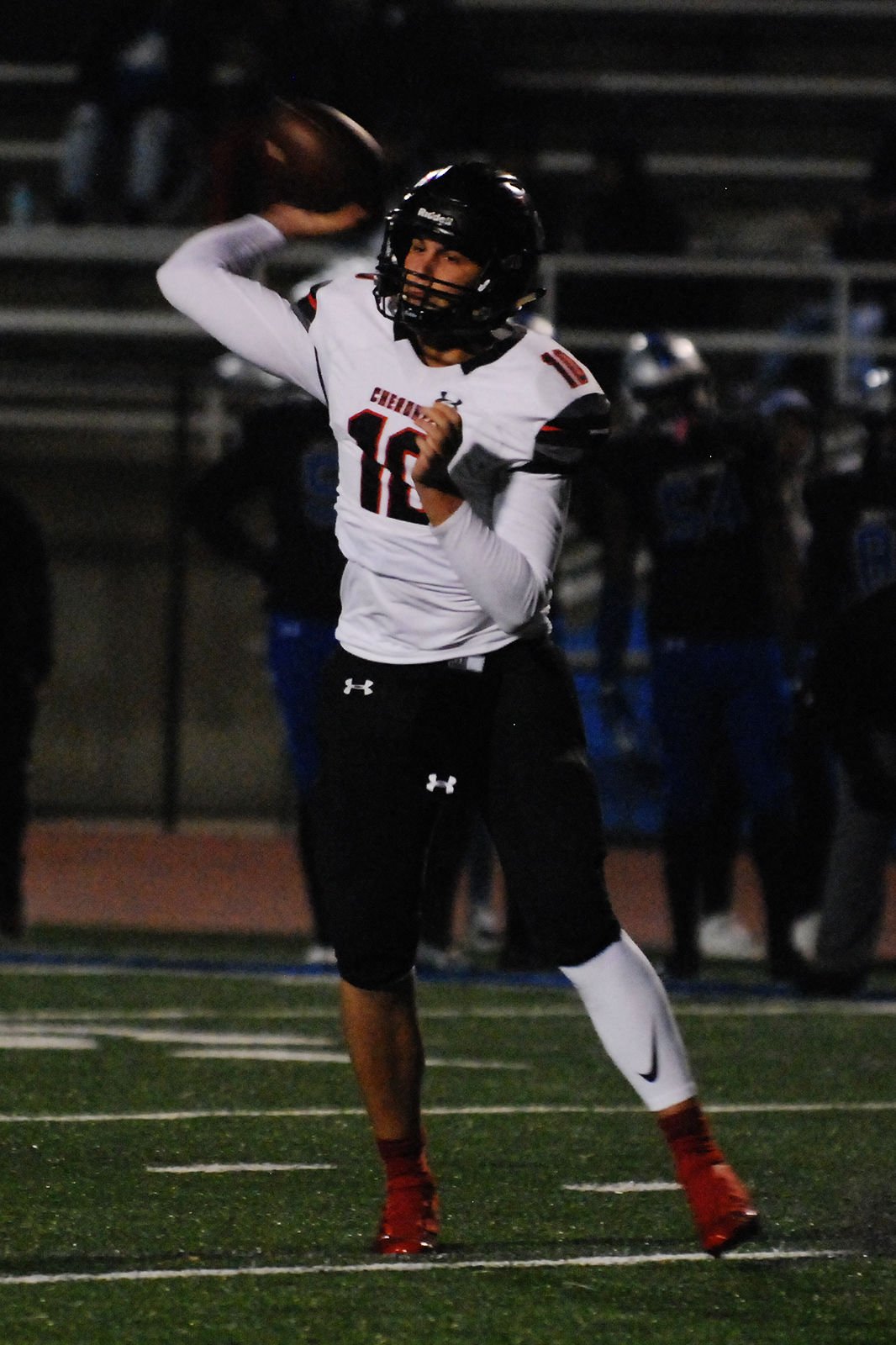 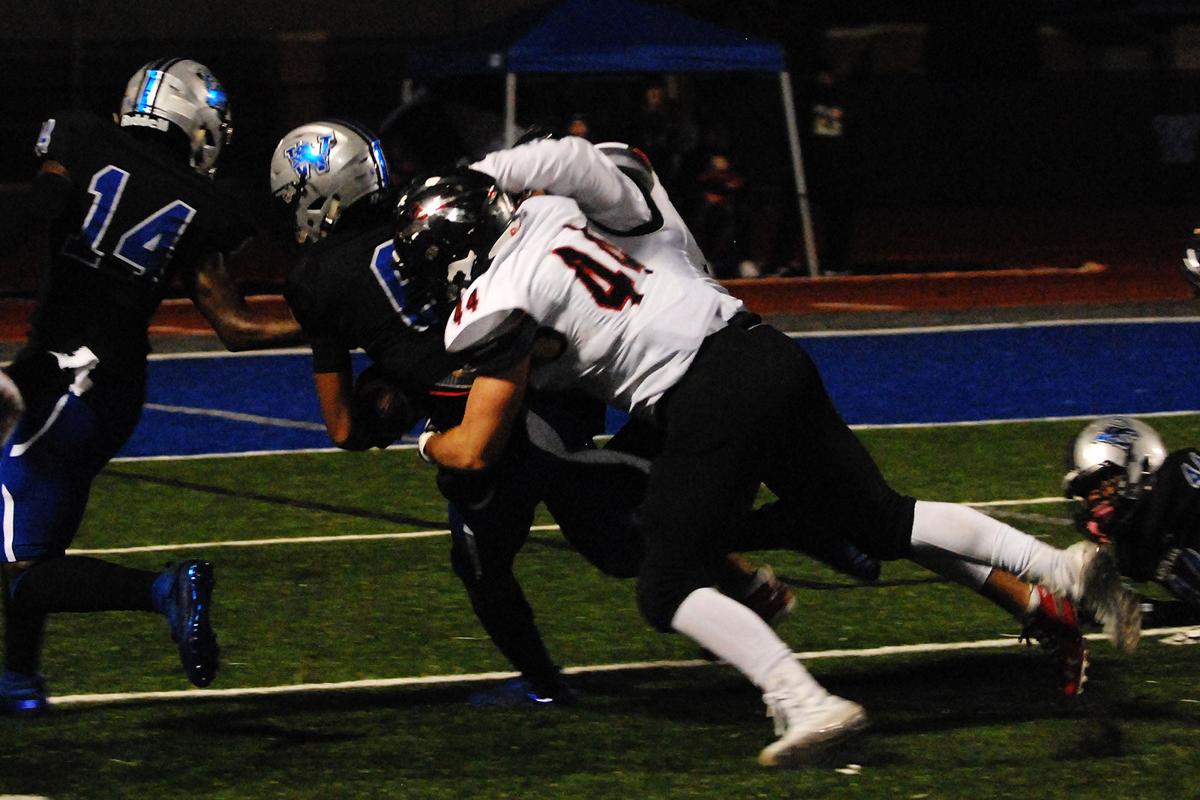 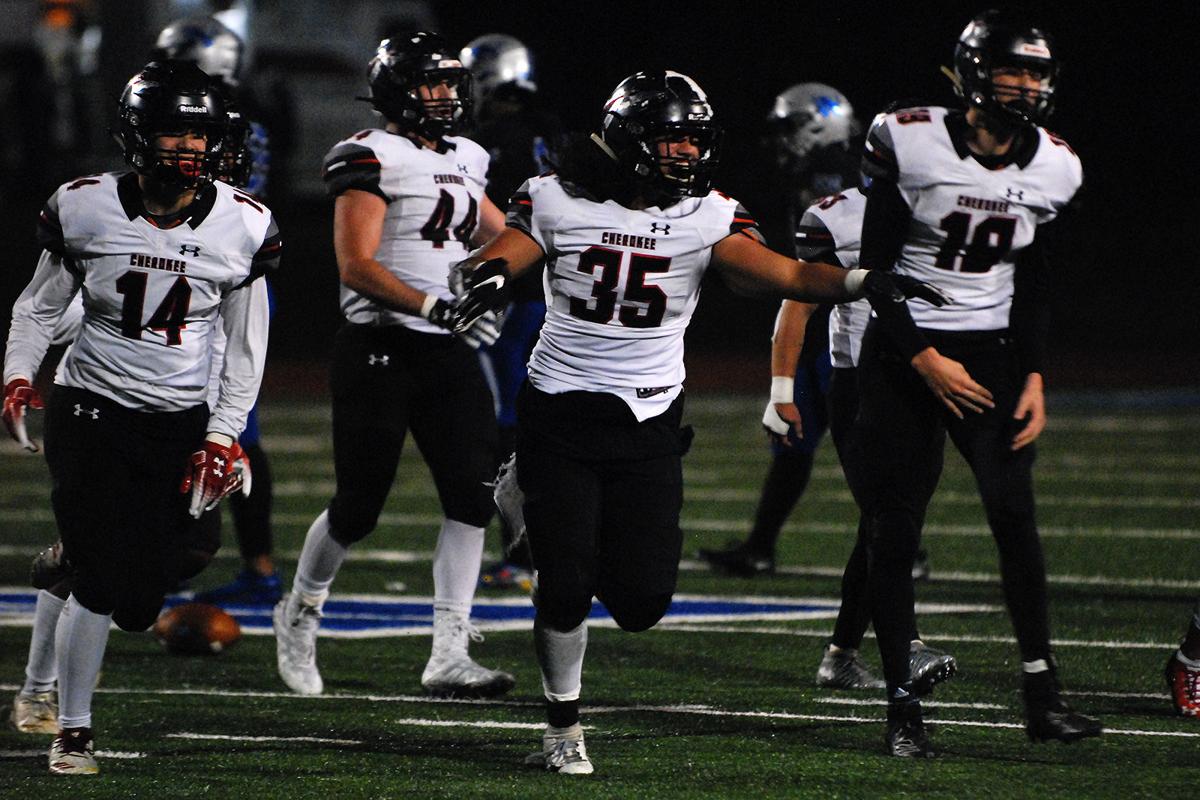 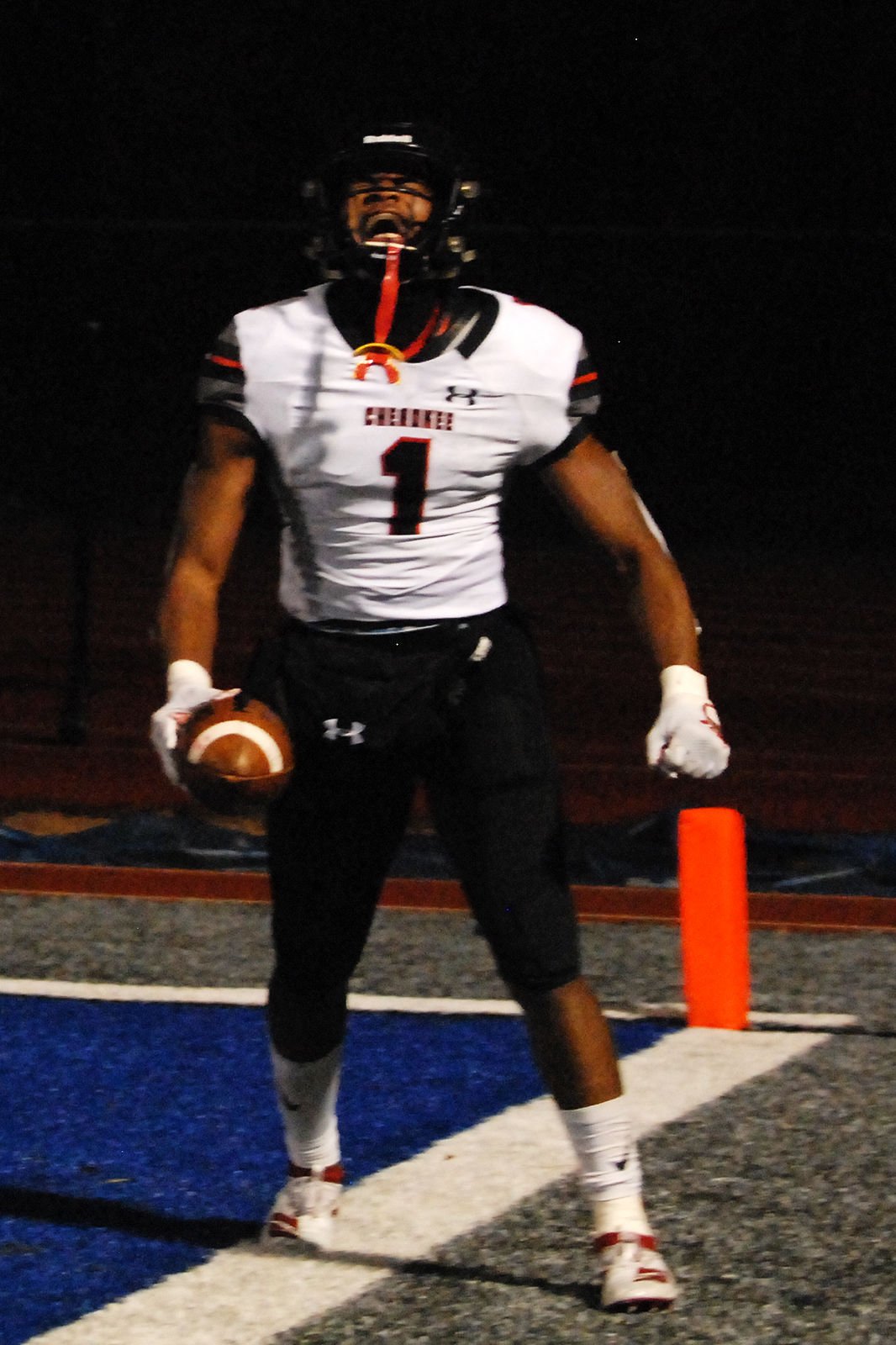 Cherokee's Devin Ellison lets out a yell after scoring a touchdown for the Warriors Friday night against Westlake. SPECIAL/LAURA MOON. 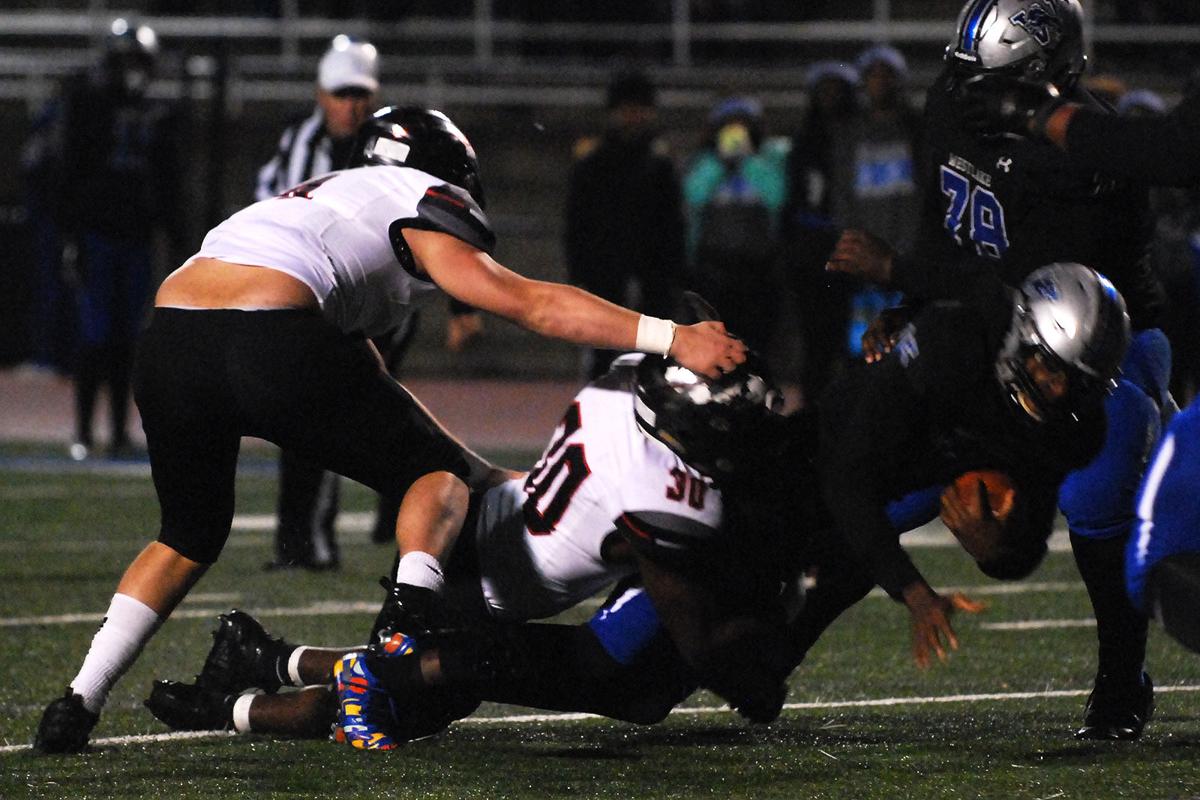 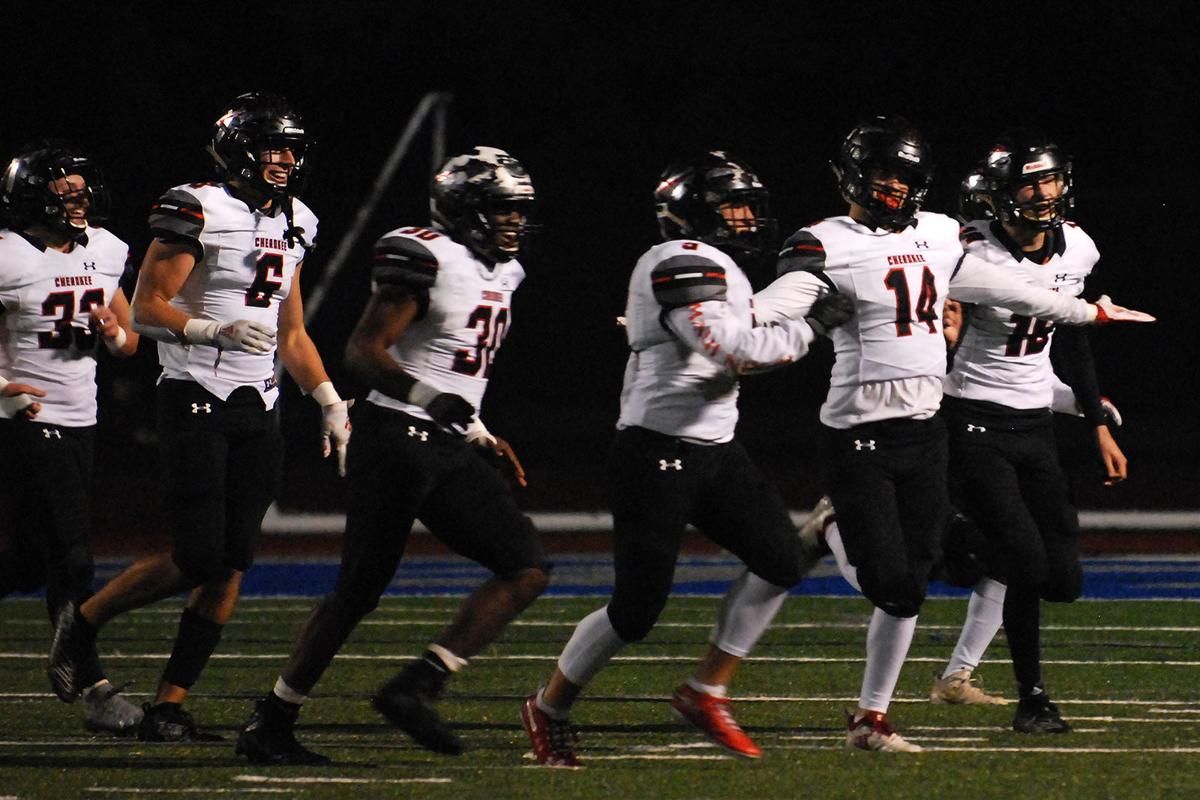 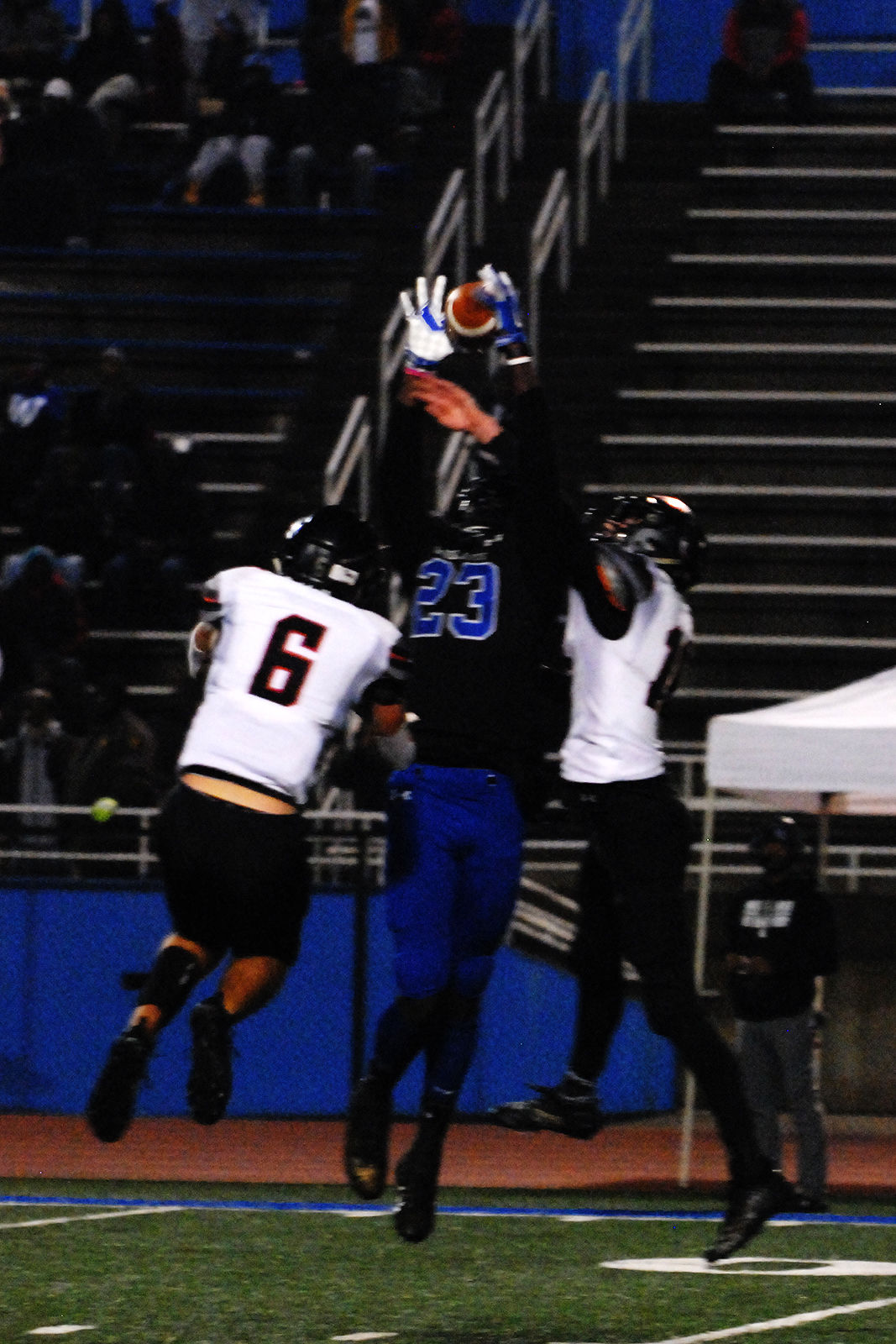 Cherokee's Devin Ellison lets out a yell after scoring a touchdown for the Warriors Friday night against Westlake. SPECIAL/LAURA MOON.

ATLANTA — Cherokee’s offensive line is going to be eating well in the near future.

“I told the the offensive line that, if they didn’t give up any sacks, we’ll take them to LongHorn,” Cherokee coach Josh Shaw said. “I forgot I said that until they reminded me.”

The Warriors’ offensive line delivered on Shaw’s request, and the team as a whole put together a solid effort overall in defeating Region 2AAAAAAA champion Westlake 43-21 on Friday in the first round of the Class AAAAAAA state playoffs.

The Region 5AAAAAAA fourth-seeded Warriors (8-3) advanced to the second round for the first time since 2016 and will travel to Archer next week.

“I’m really proud of the kids and the coaches,” Shaw said. “It’s been such a great season so far, you don’t want it to end. It’s exciting. We felt like we were a couple of plays away from being region champion, so to be able to continue our season and play like we did (Friday) is pretty special.”

Cherokee was able to move on to the next round by maintaining possession over the game’s final 10:19, after Westlake (6-5) cut a 41-10 deficit down to 41-23. The Warriors recorded five first downs on their final drive that included 16 running plays.

The defense led the way in the first half, totaling five interceptions and scoring 13 points off those turnovers.

“Our word for the week was ‘finish,’” Shaw said. “We haven’t done a good job of that this season, and I think it was our defense that really sparked us. We had a horrible third quarter and really started to let Westlake back in the game when they scored back-to-back touchdowns.

“But when our defense got a stop, I think it stimulated our offense. That last drive was a critical drive.

A.J. Swann finished 13-for-17 for 224 yards and three touchdowns to pace Cherokee. Adarrius Harshaw had three catches for 115 yards and two scores, while Devin Ellison finished with eight receptions for 88 yards and a score. Keith Adams Jr. had 30 carries for 87 yards with one touchdown.

Westlake’s Jamari Sirmons spurred Westlake’s second-half comeback with touchdown runs of 18 and 1 yards to get the Lions’ to within 18 late in the third period, but they couldn’t get closer the rest of the way.

Cherokee extended its 24-point halftime advantage right out of the gate, scoring on the opening possession of the second half behind an 8-play, 73-yard drive, capped by Swann’s 47-yard touchdown completion to Harshaw on third-and-6. The reception extended Cherokee’s advantage to 41-10 with 8:42 left in the third quarter.

“A.J. did a great job, and Harshaw and Ellison made some big plays for us,” Shaw said. “And give credit to the offensive line. They did a heck of job battling in the trenches.”

Cherokee scored 13 points off five Westlake turnovers to stake a 34-10 lead at halftime.

The last of Brandon Byrd’s two interceptions resulted in Luis Mijangos’ 27-yard field goal as time expired that put the Warriors in front by 24.

Leading 7-3 at the end of the first period, Swann built on the Warriors lead with a 60-yard touchdown completion to Harshaw.

Westlake answered back behind Micah Robinson’s 80-yard kickoff return which set up Jamari Sirmons’ 4-yard touchdown run that trimmed the Lions’ deficit to 14-10.

From there it was all Cherokee, which ran off 20 unanswered points to build its halftime cushion.

“Our defense has been opportunistic with turnovers all season,” Shaw said. “Those five picks in the first half were pretty special.”

Braesen Parker’s 41-yard kickoff return to the Lions’ 50 led to a 5-play scoring drive, capped by Swann’s 25-yard touchdown completion to Ellison and a 21-10 Cherokee lead.

Westlake opened the game with a 13-play, 74-yard drive resulting in a 34-yard field goal from Aaron Genus.

Cherokee responded on its ensuing possession, capping a 10-play, 70-yard drive with a 3-yard run from Adam for the early 7-3 lead.

Jacobi Hobson and Hunter Pendley each recorded a sack.