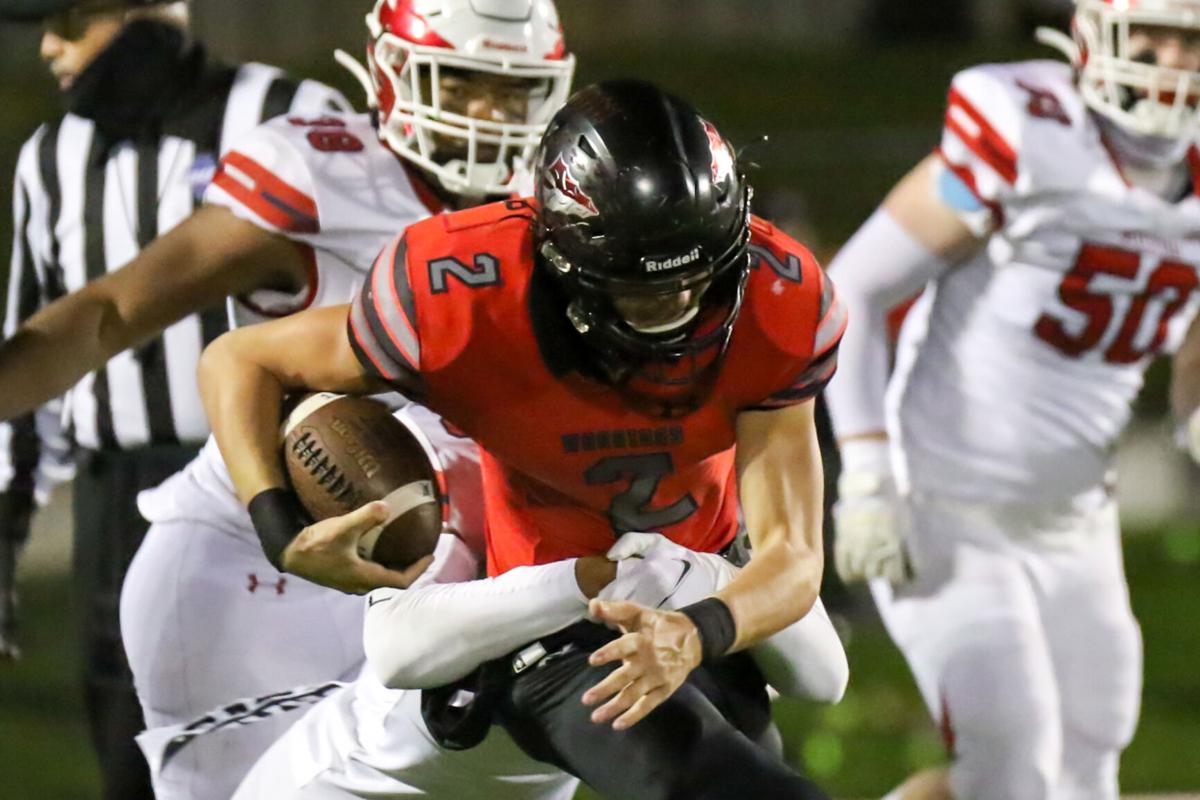 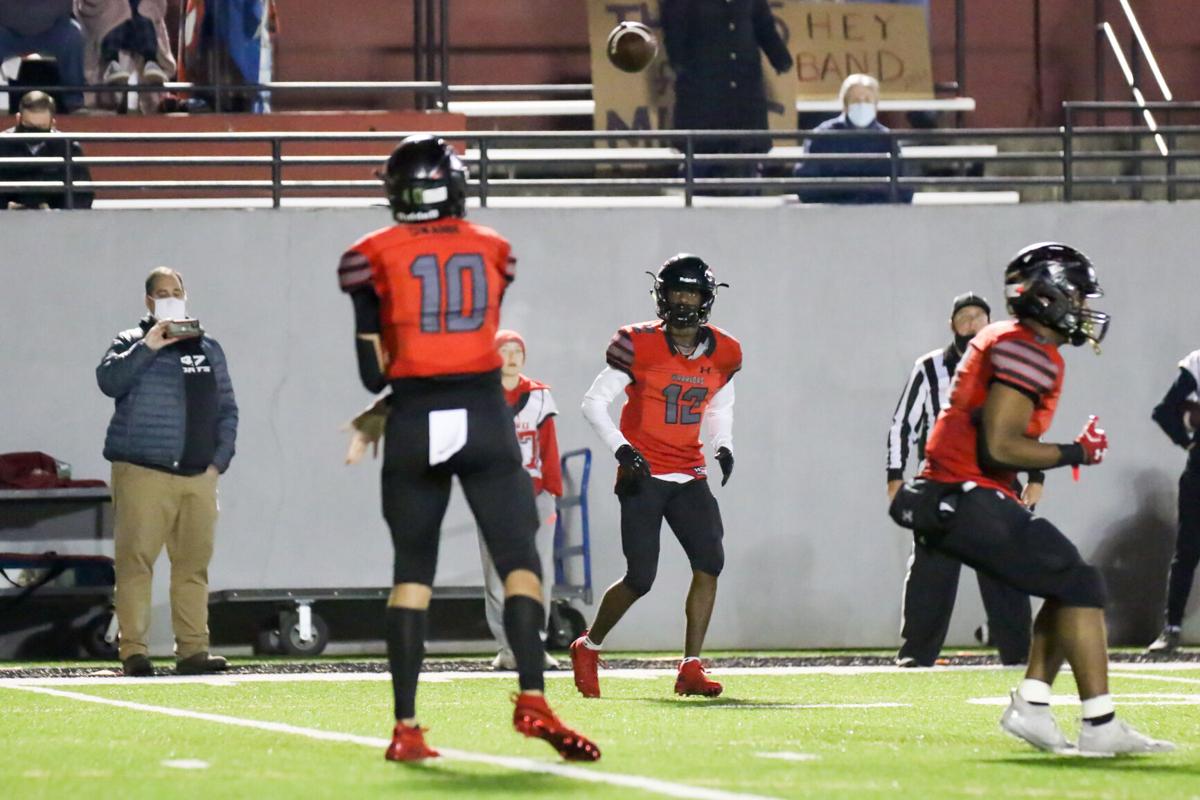 AJ Swann with the short pass to Adarrius Harshaw 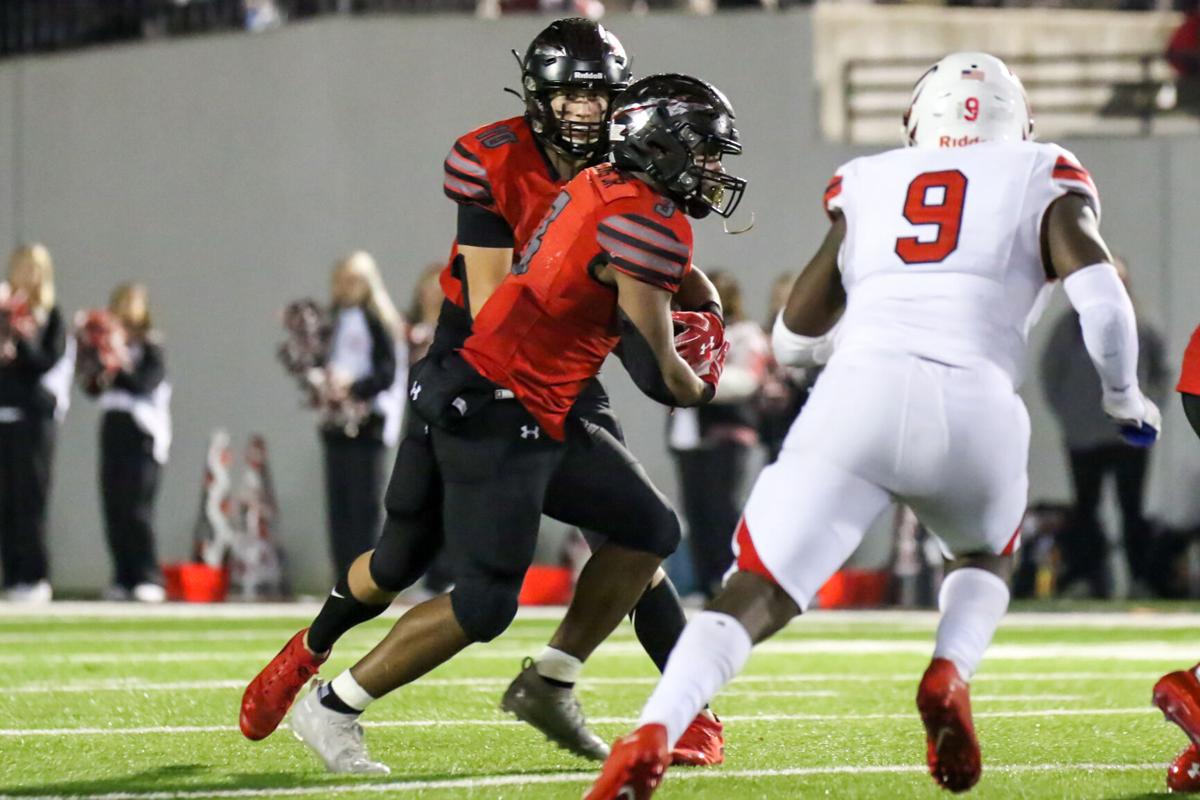 AJ Swann with the handoff to Keith Adams Jr 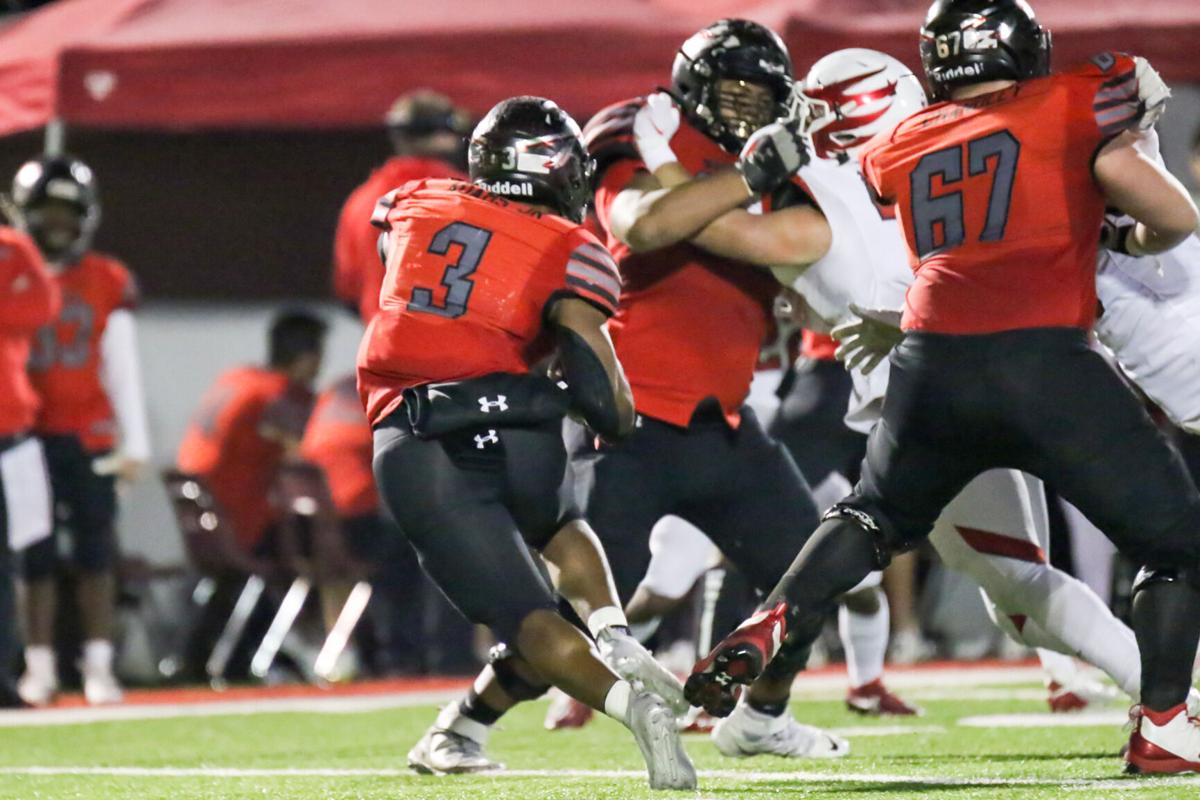 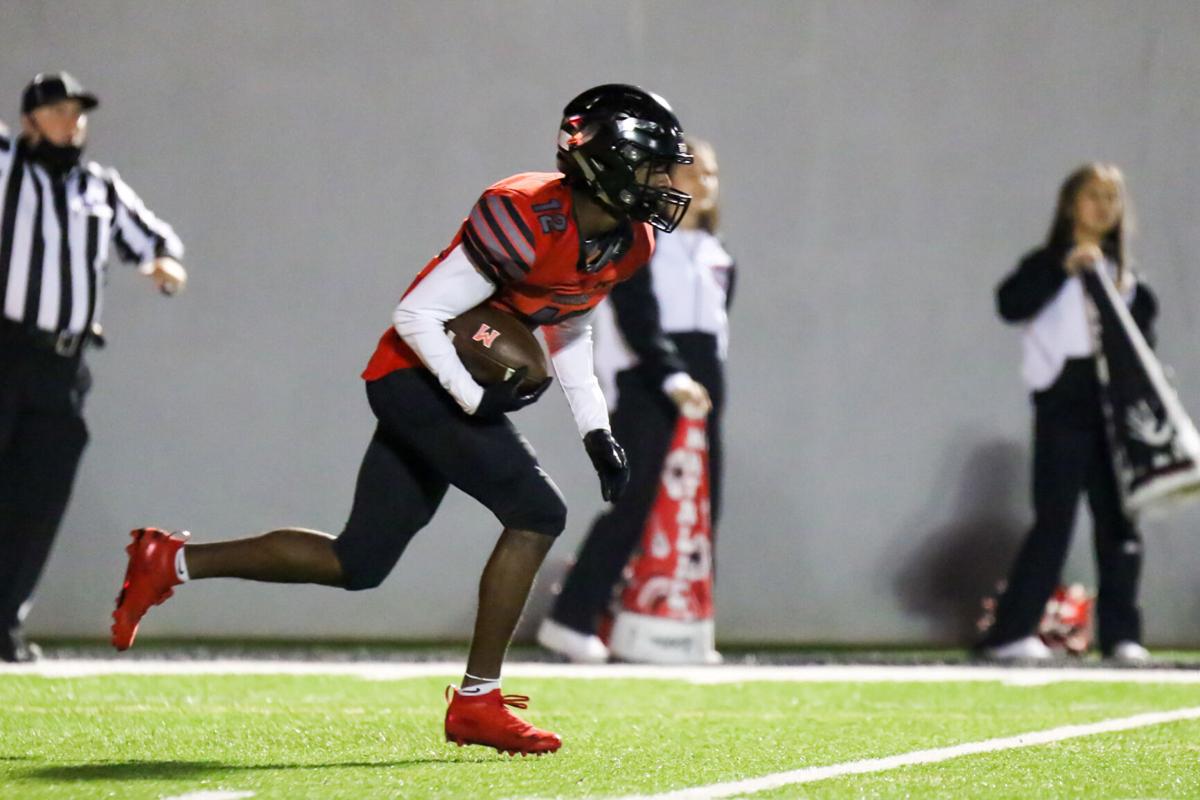 Adarrius Harshaw with the kickoff return 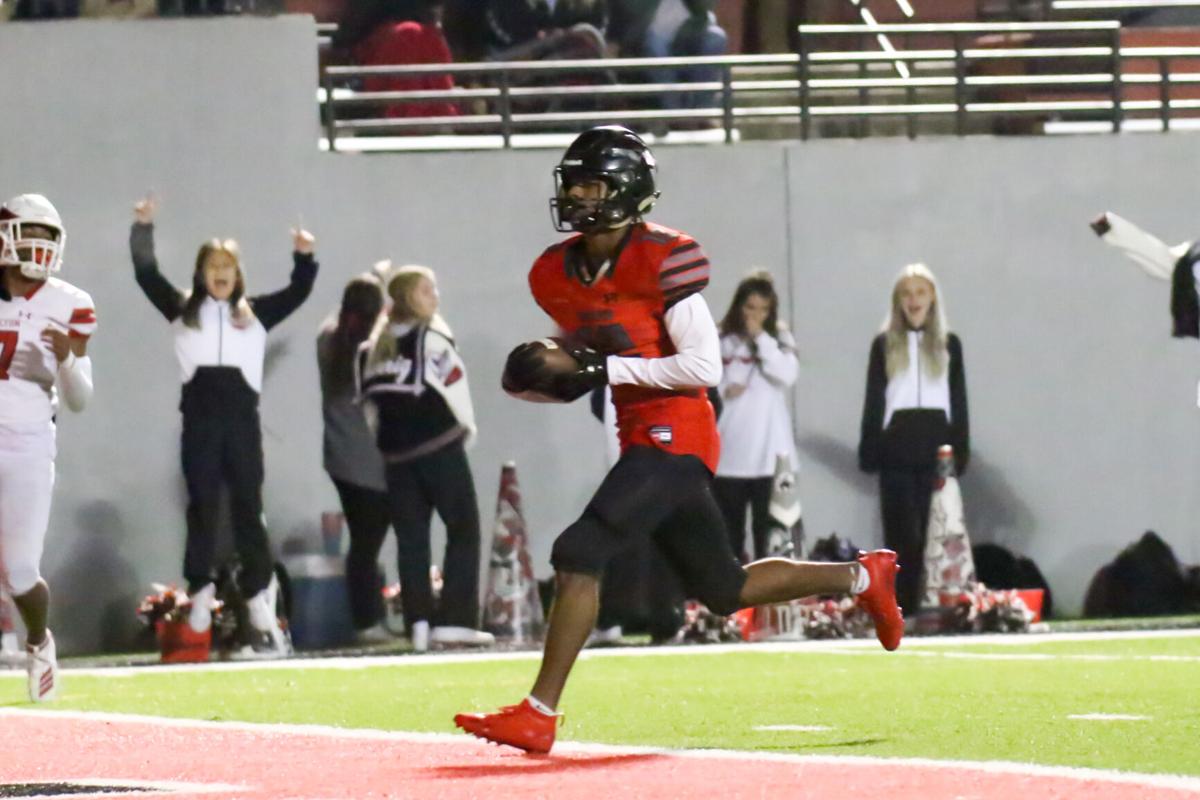 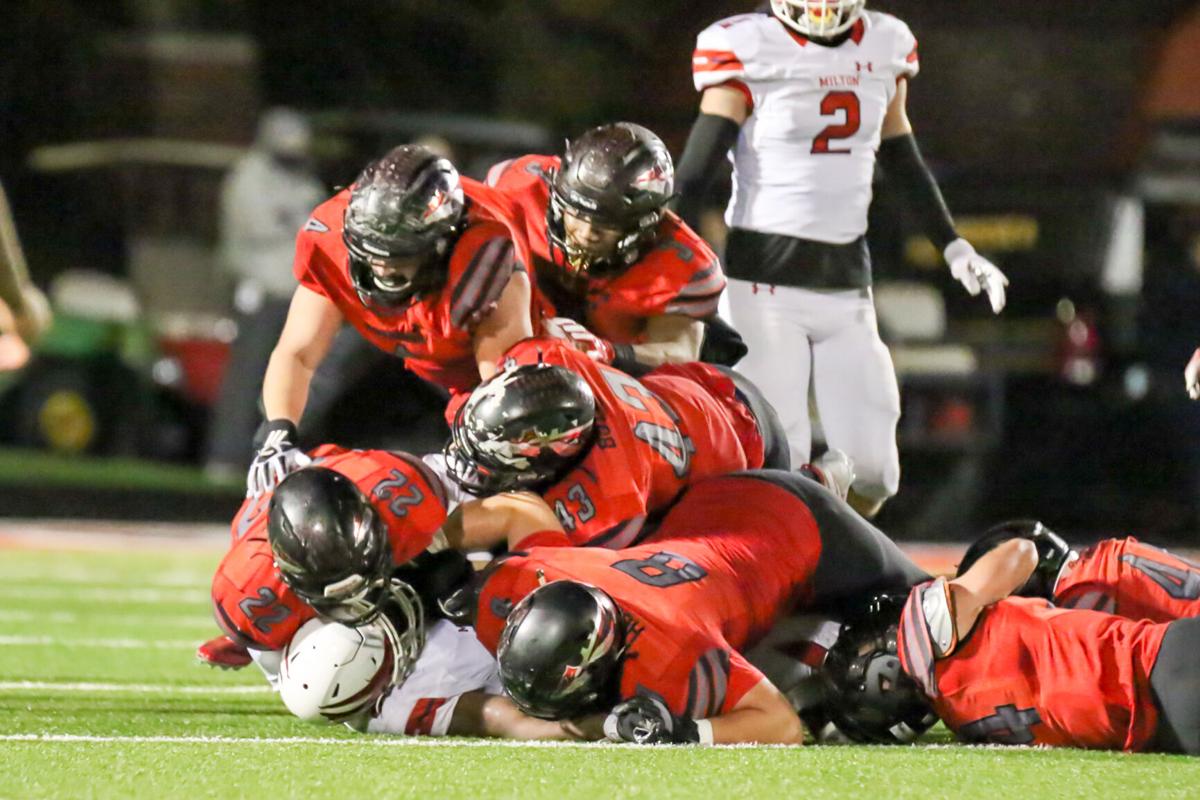 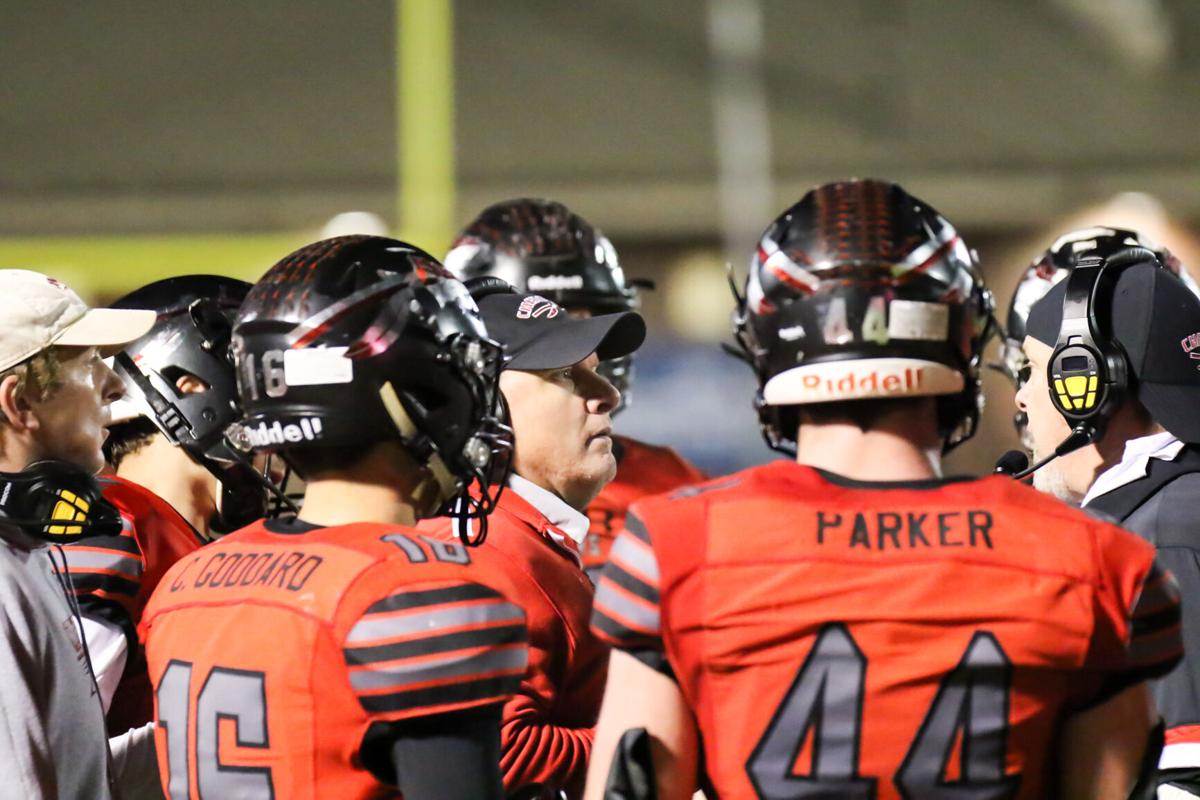 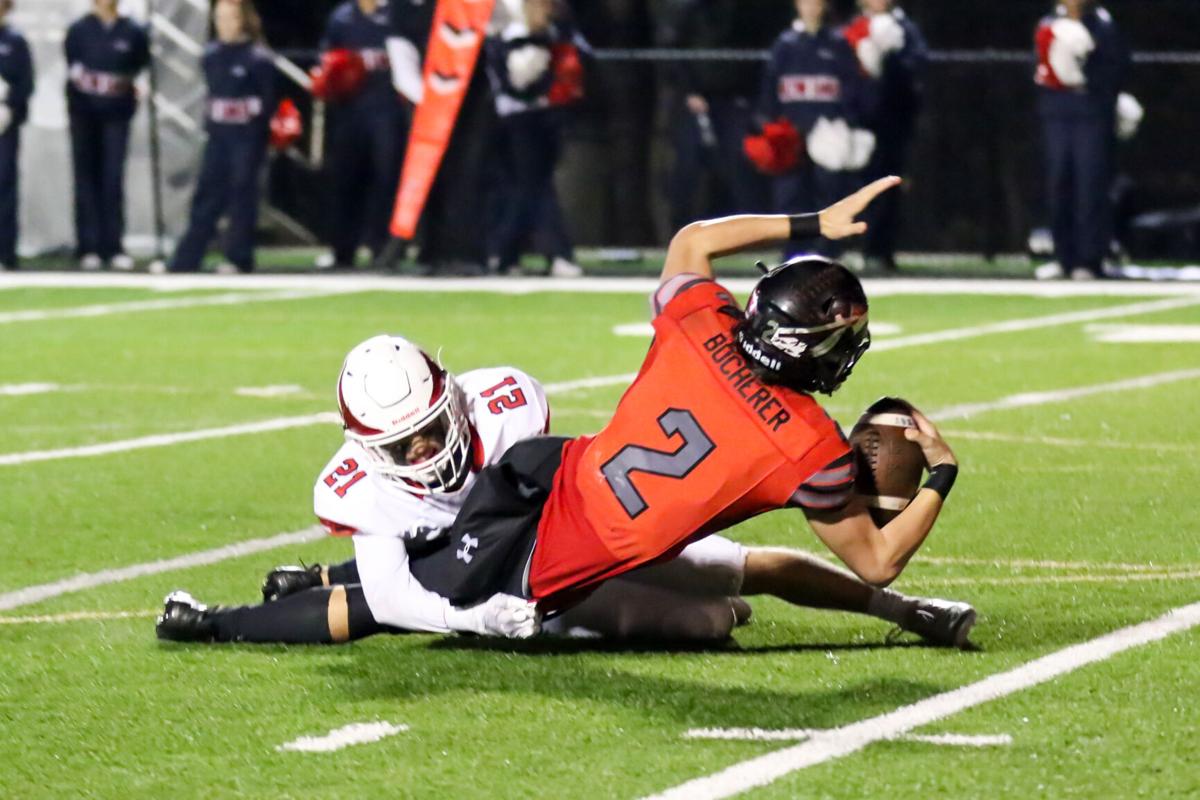 Brady Bocherer stretching for every yard he can get 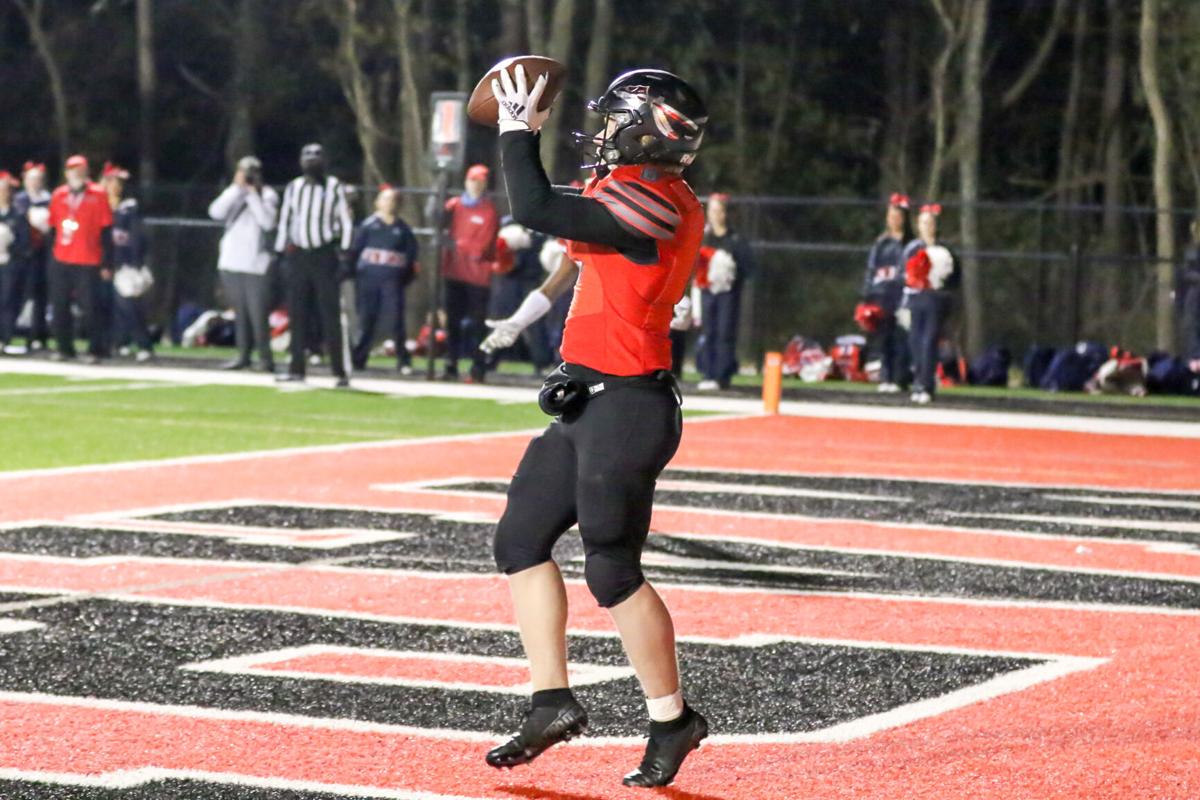 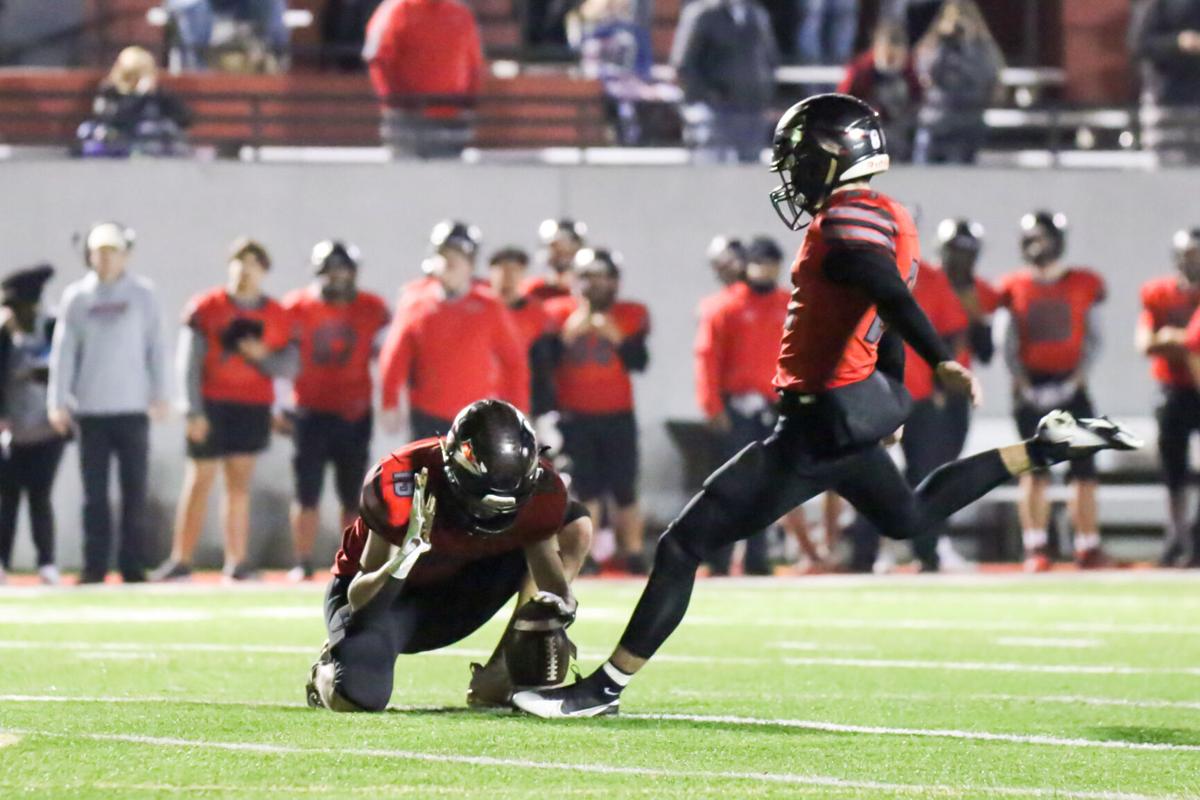 Joel Stahl for the extra point 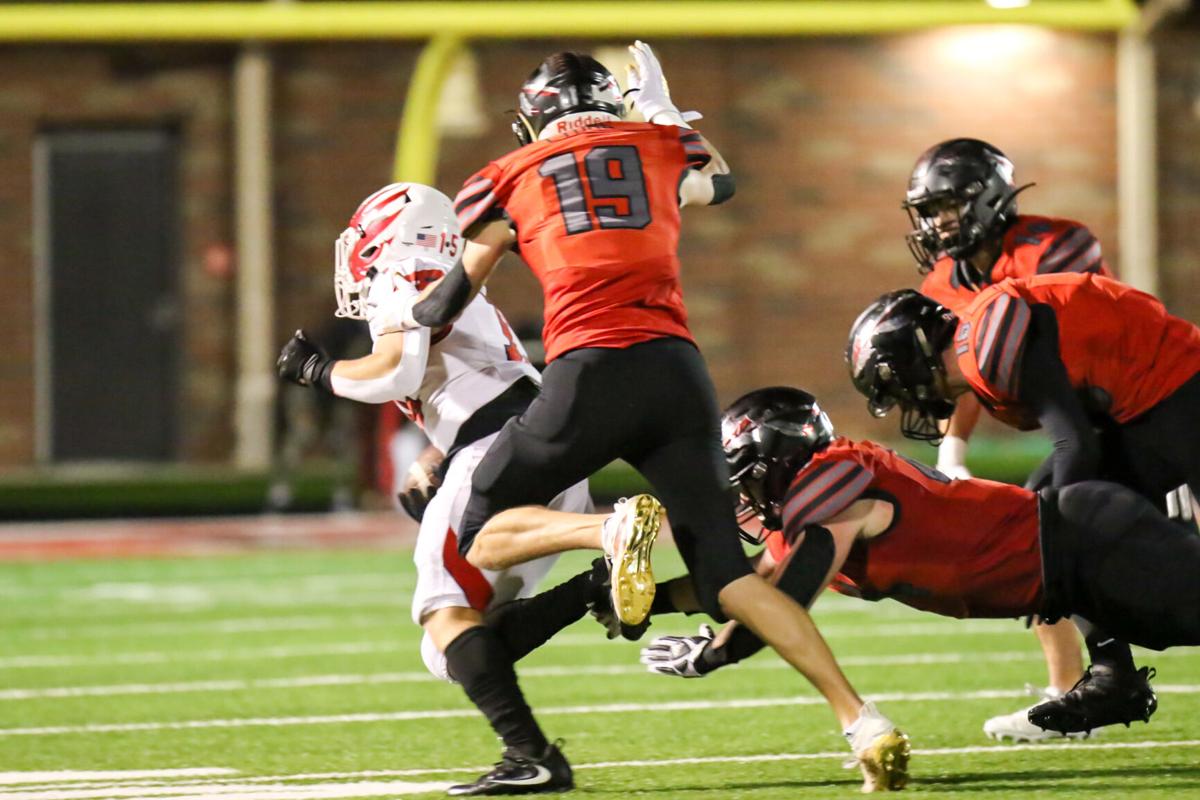 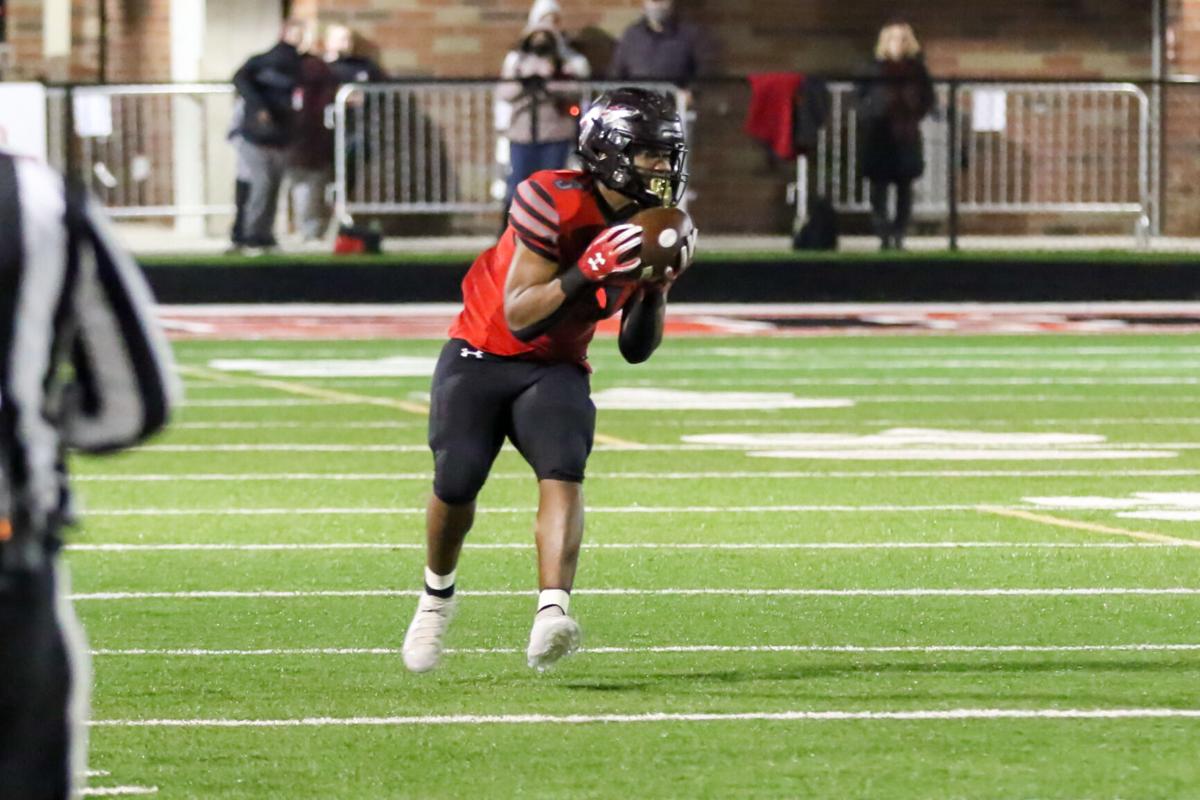 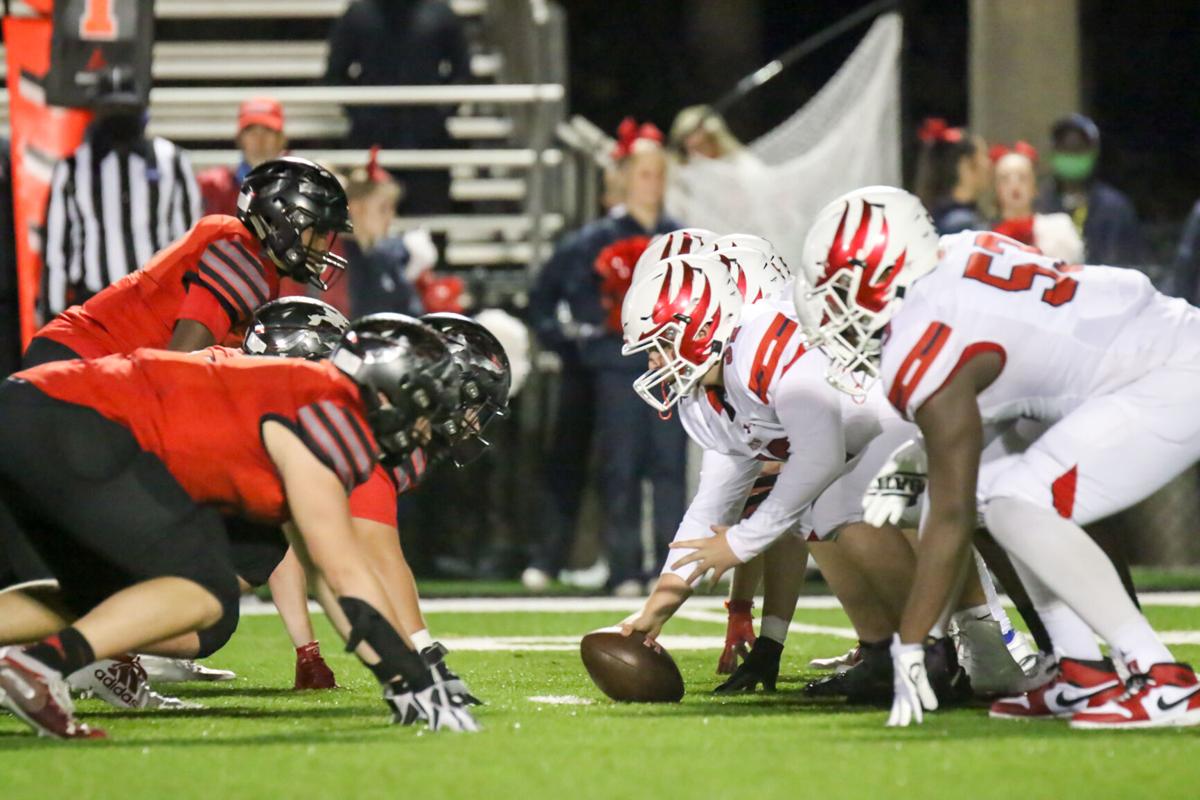 AJ Swann with the short pass to Adarrius Harshaw

AJ Swann with the handoff to Keith Adams Jr

Adarrius Harshaw with the kickoff return

Brady Bocherer stretching for every yard he can get

Joel Stahl for the extra point

CANTON — What was billed as two of the better teams in Class AAAAAAA lived up to the hype last Friday night at Tommy Baker Field.

In what amounted to the de facto Region 5AAAAAAA championship game, Milton defeated Cherokee 41-29 to complete an undefeated regular season and win the region title.

Both teams entered the game with two of the top scoring defenses in the state, but it was a pair of offensive players who shined brightest for each side.

It was a pivotal moment, giving Milton a 34-22 lead with 2 minutes left.

“I thought about everything my dad has taught me about the game of football, and how it’s important not to let the pressure get to you and to just embrace it,” McDonald said. “I just took it upon myself, and I knew, with the ball in my hands, nothing bad was going to happen.”

Cherokee responded immediately with a standout play of its own.

Quarterback A.J. Swann drove Cherokee down the field with four straight passes, the final one finding Hayden Shockley for a short score. Swann finished 27-for-36 passing for 439 yards with four touchdowns, and he added a reception for a 2-yard touchdown.

Shockley cut Milton’s lead to 34-29, setting up a final onside kick, but Cherokee was unable to recover. McDonald broke free one last time to give Milton its final score, but the game was in the balance until the final minutes.

“I think we should have won this game if it were not for a couple of mental mistakes we had,” Swann said. “But we never stopped fighting, and I’m proud of our team. Coach (Josh) Shaw told us to keep our heads up, and we’re still in the playoffs.”

After McDonald opened the scoring with his first touchdown — an 8-yard score late in the first quarter — Cherokee answered when Riley Lyons found Swann for a 2-yard score, but the extra point was muffed following an errant snap.

A second errant snap by Cherokee, this time on a punt, was recovered by Milton for a touchdown later in the second and the Eagles led 14-6.

“We just made way more mistakes than (Milton) did,” Shaw said. “That’s a great football team we just played, but we’re a great football team, too. We have great seniors and leadership on this team, and coming back with A.J., you’re never out of the game with him. We’ll regroup and have a great week next week, and at the end of the day, we’ll play whoever we have to play.”

Swann hit L.J. McNeal for a 70-yard score later in the second, and Joel Stahl’s 33-yard field goal gave Cherokee a 15-14 lead at the half.

Midway through the third, however, McDonald took over.

He burst free for a 75-yard score, which was followed by a short 5-yard touchdown run by Bryce Thornton minutes later.

Milton led 27-15 late in the third, but Swann connected with Adarrius Harshaw for a 23-yard touchdown with a little more than 9 minutes left in the fourth quarter. The score put Cherokee in striking distance, but Milton’s long fourth-quarter touchdown drive sealed the outcome.

“Cherokee is a heck of a football team, and they’ll expose you every time you give them an opportunity,” Milton coach Adam Clack said. “I was so proud of our guys for being able to take one heck of a punch. It was like a heavyweight boxing match tonight, back-and-forth. That was a critical drive at the end, and it’s a testament to following the process. The region was the goal, and I’m just so proud of this football team.”