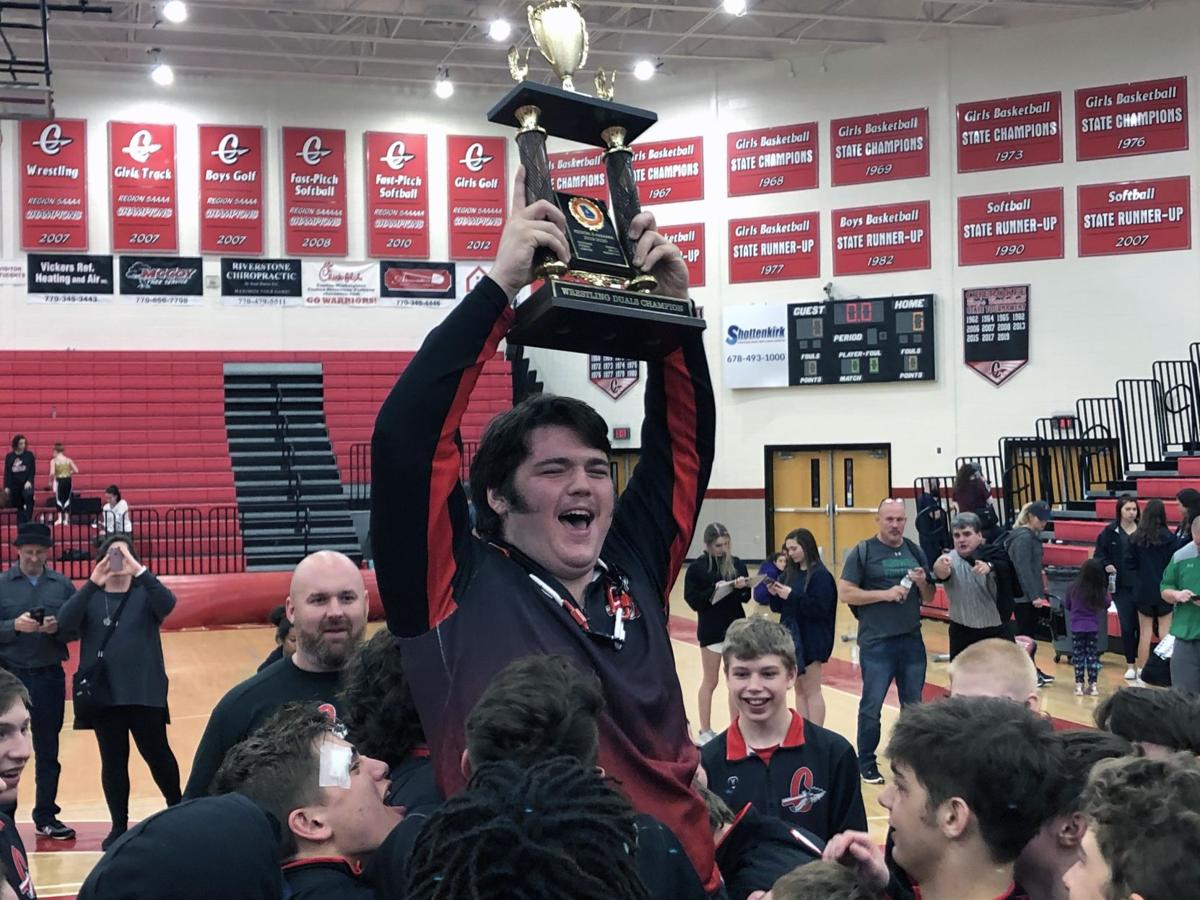 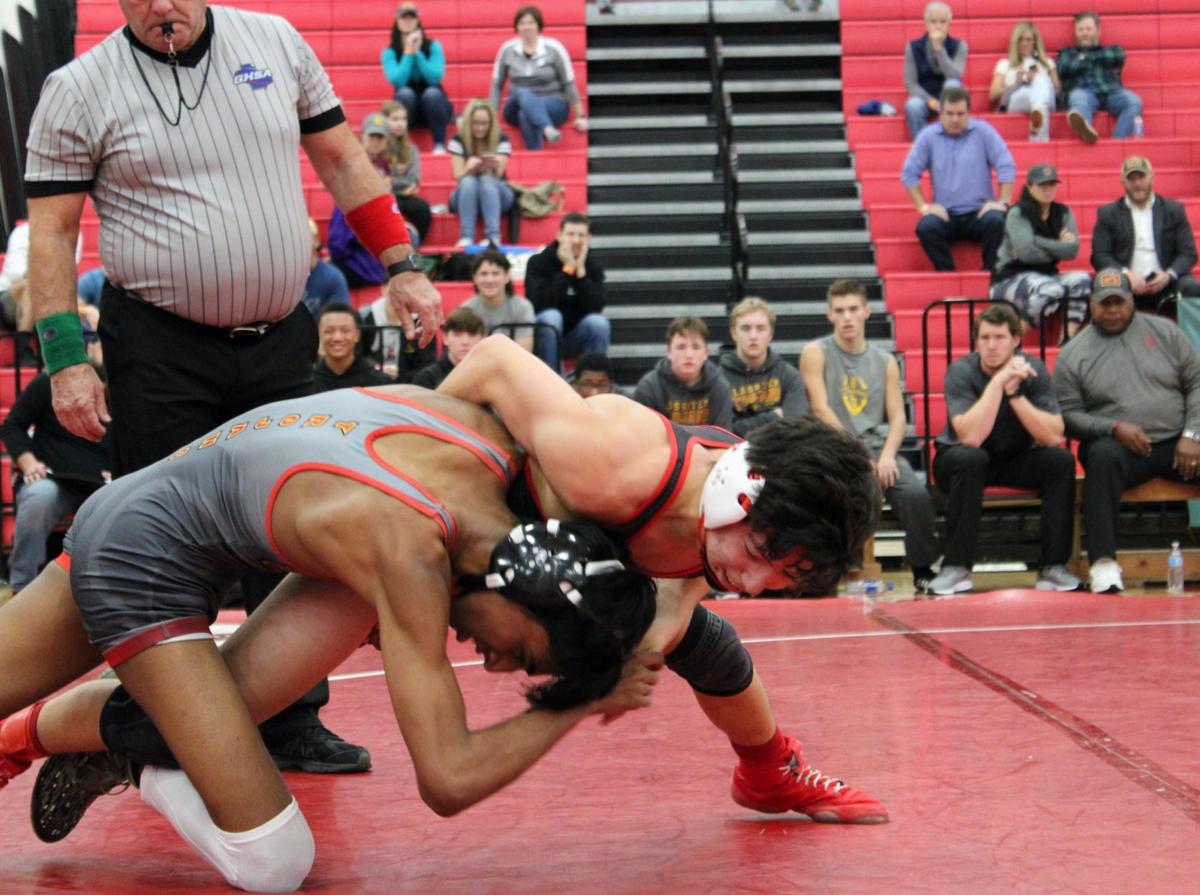 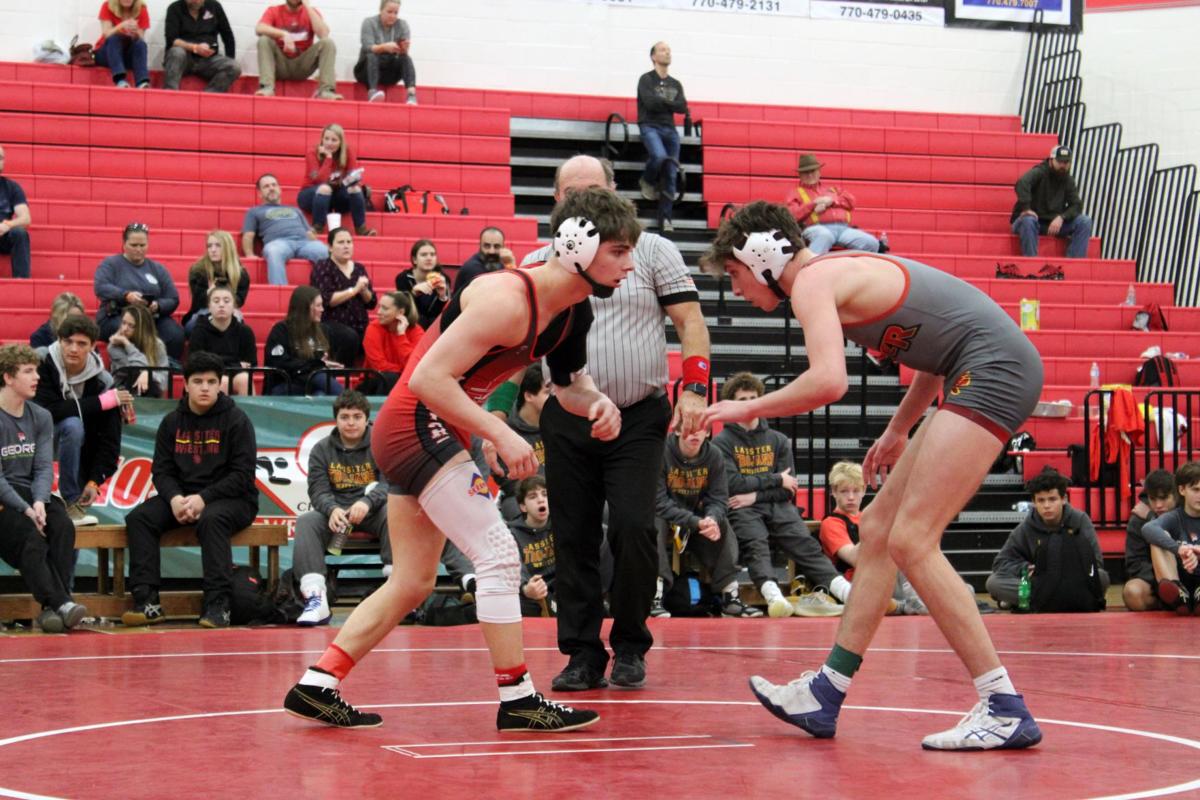 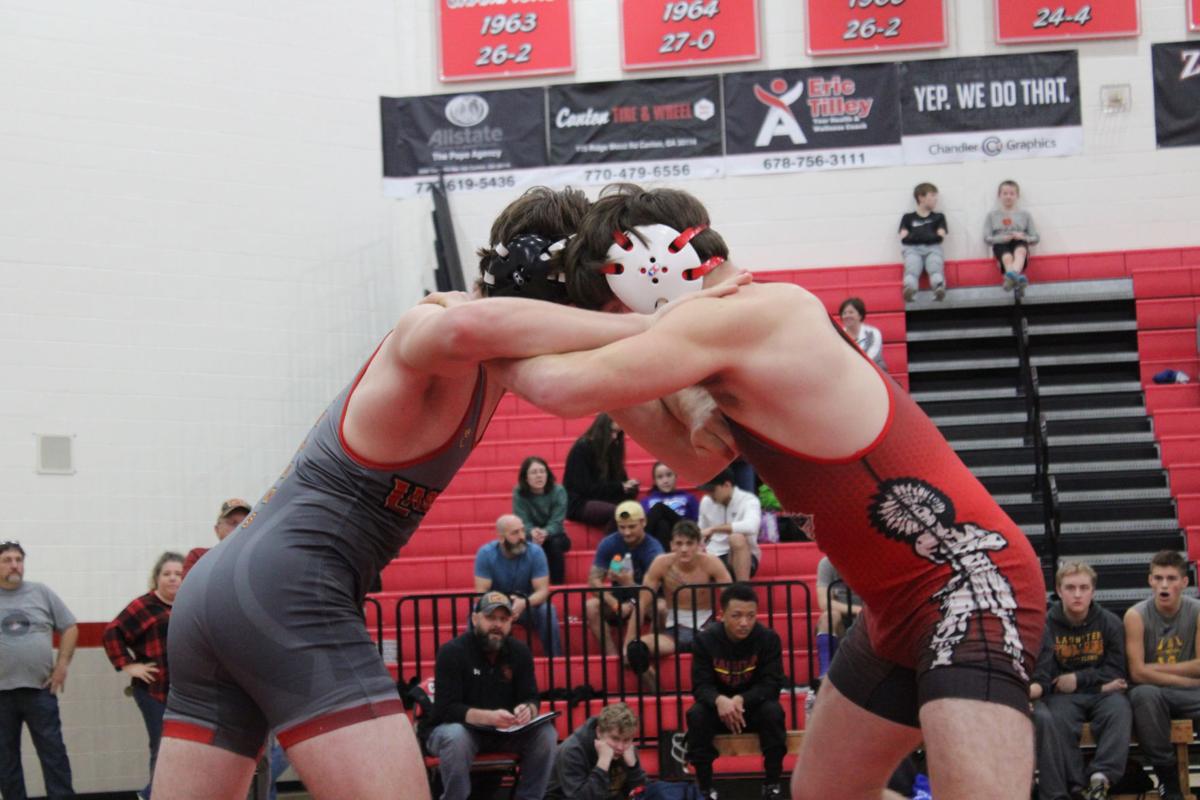 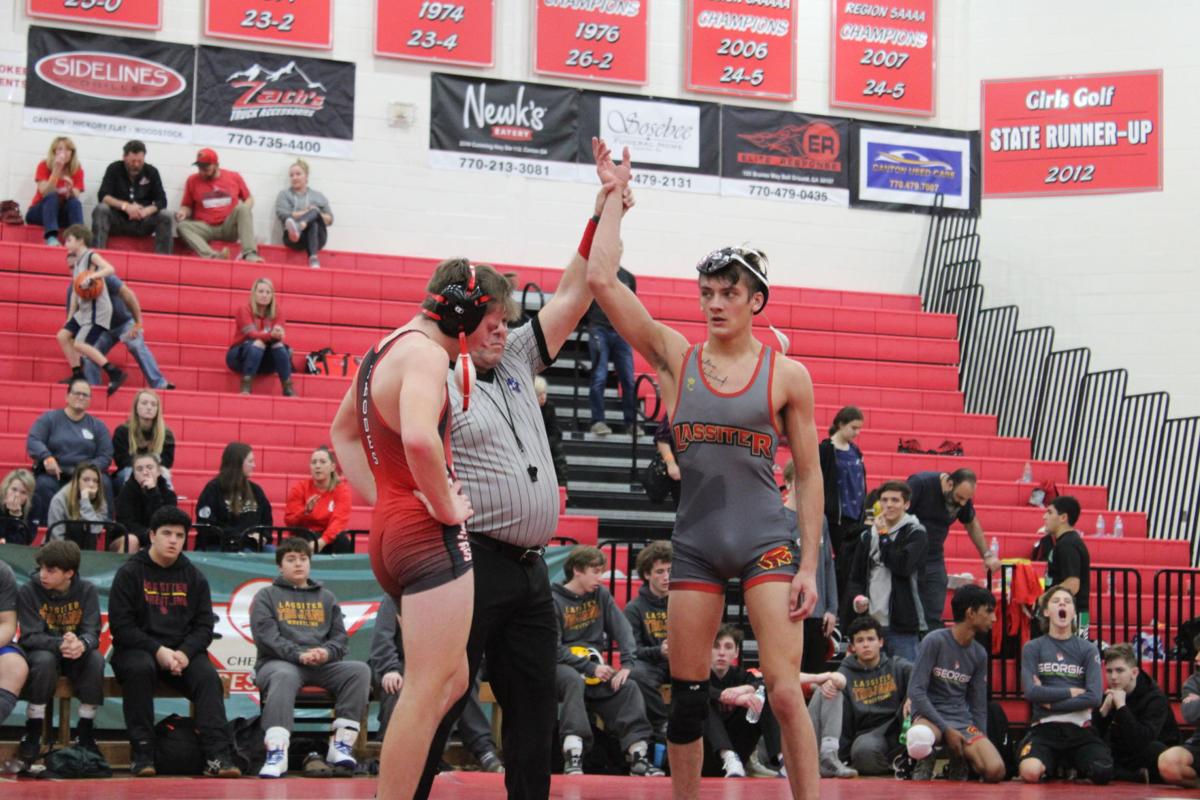 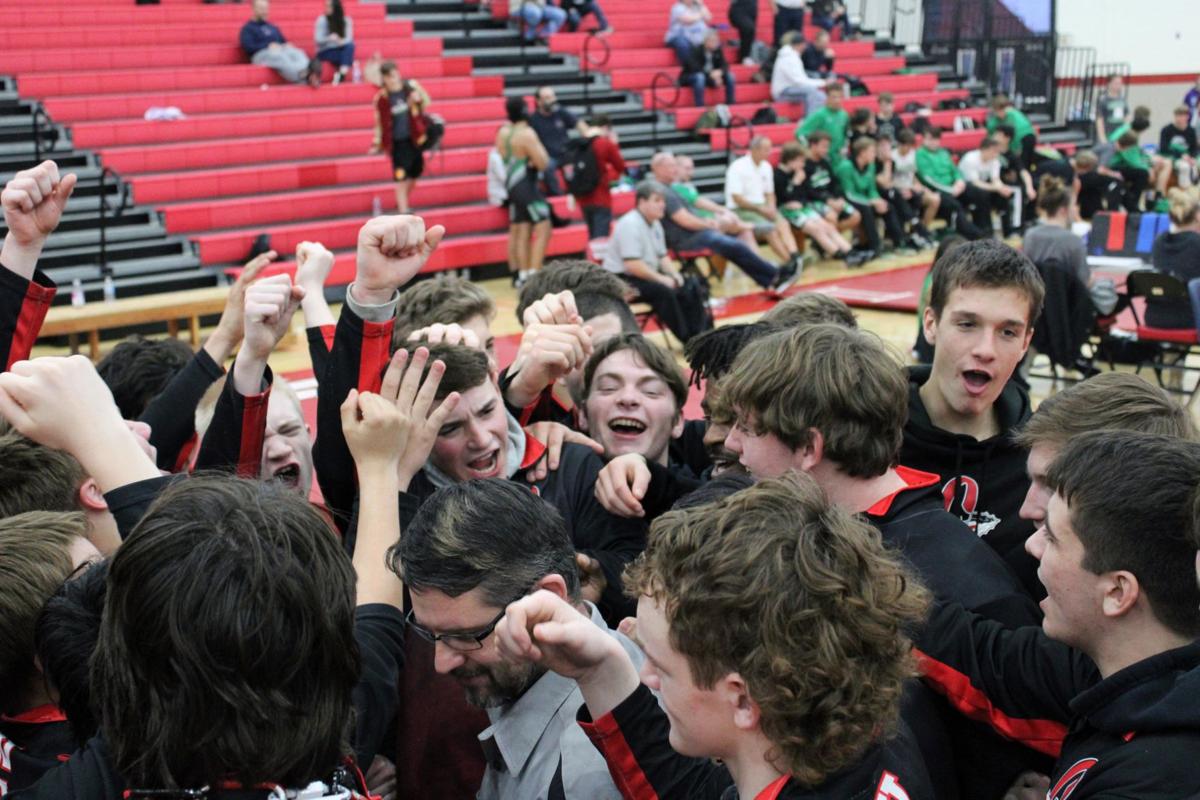 The Cherokee wrestling team celebrates following a defeat of Etowah in the last match of the day to clinch the Region 4AAAAAAA championship. 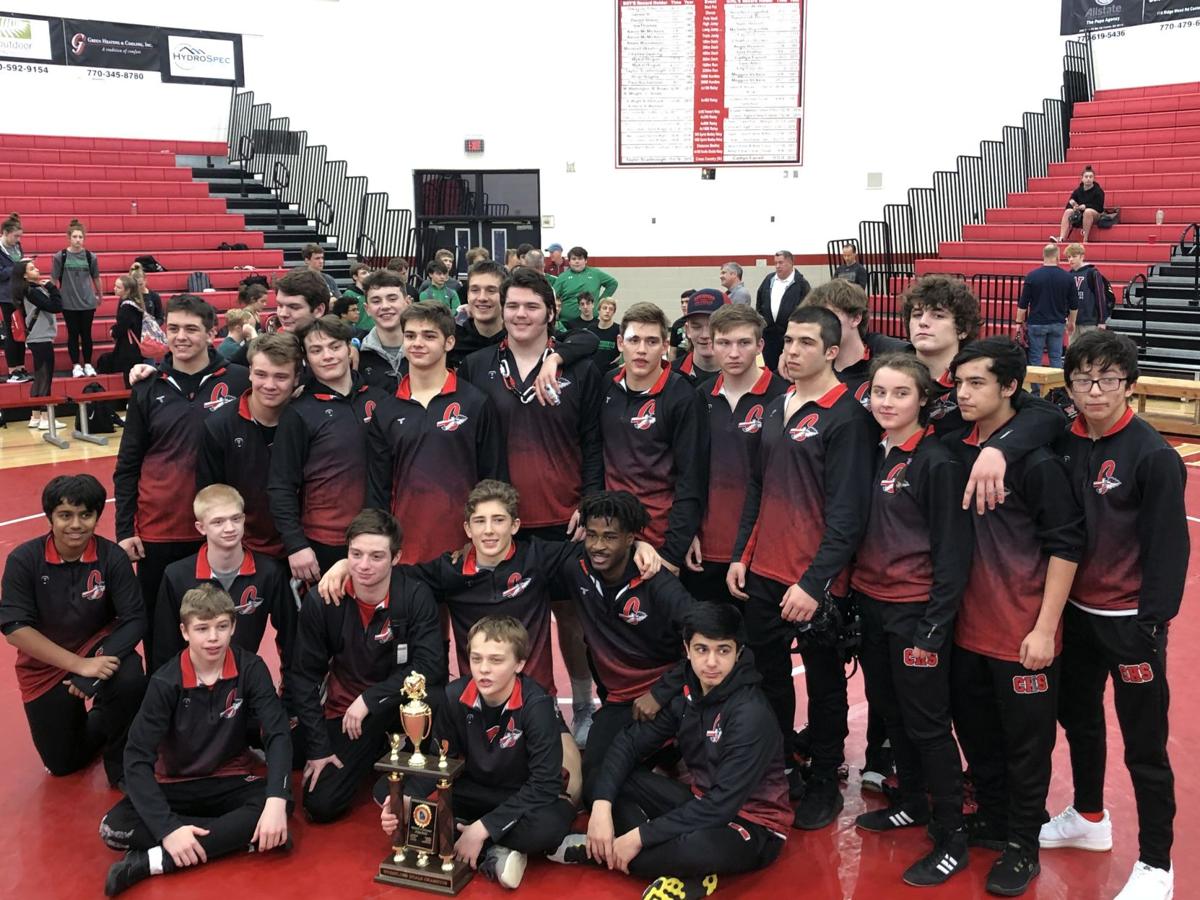 Cherokee wrestlers pose together after winning the third region championship in program history. 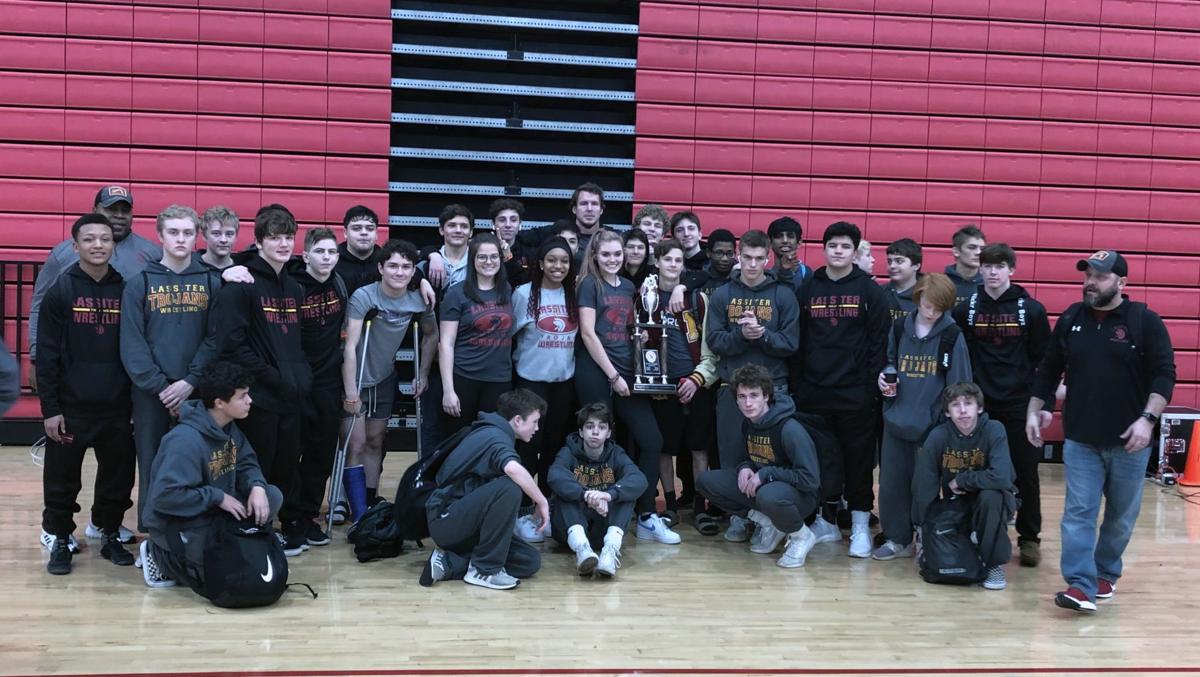 The Lassiter wrestling team finished as runners-up in the Region 4AAAAAAA duals on Saturday in Canton. 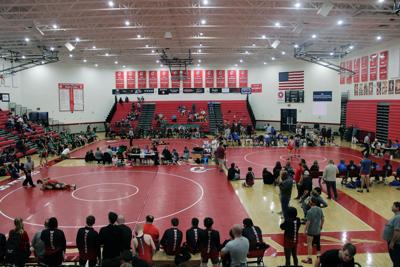 The Cherokee wrestling team celebrates following a defeat of Etowah in the last match of the day to clinch the Region 4AAAAAAA championship.

Cherokee wrestlers pose together after winning the third region championship in program history.

The Lassiter wrestling team finished as runners-up in the Region 4AAAAAAA duals on Saturday in Canton.

CANTON — In Saturday’s round-robin Region 4AAAAAAA duals at Cherokee, the Warriors faced off with Lassiter in what ultimately proved to be the decisive match and prevailed in dominant fashion.

Cherokee won 58-18 as it finished a perfect 5-0 to claim the region title Saturday. The Warriors outscored their opponents 267-104 in their five matches while claiming their second straight region duals title and the third in program history.

“Last year, we were extremely dominant throughout the entire season and, honestly, this year, we’ve overachieved,” Cherokee coach Gerald Kadien said “We weren’t sure heading into this season how strong of a duals team we would be. We had some injuries earlier in the season, but we put it all together over the Christmas break and finally had our first full lineup of the season.”

Cherokee lost to both Lassiter and Woodstock earlier in the season, but no team could stay within striking distance of the Warriors on Saturday. Kadien said having his full roster healthy was important, but his expectations were not to blow through the competition.

“We had that pressure on us last year because everyone expected us to win, but, this year, we came in not knowing what would happen,” Kadien said. “The round-robin format really makes it anyone’s match, but having our kids get down to their optimal weight classes really helped us. We had a lot of shifting that happened in multiple weight classes over the past few weeks.”

Lassiter held the score close against Cherokee through the first eight matches, with wins by Austin Whited (113), Ananth Manibushan (120), David Panone (132) and Landon Chambers (145), but the back half of the Warriors’ lineup proved to be the deciding factor.

Leading 28-18, Cherokee went on to win the next six matches, with four coming by way of a pin. Nolan Newby (152) earned a pin in the final seconds of the third period, leading to three straight pins by Jonathan Cole (160), Jake Matheny (170) and Stephen Weatherby (182) to follow.

Cherokee’s Jacob Silka (106) finished the day a perfect 5-0, with four pins and one win by forfeit. The middle weights were where the Warriors did most of their damage, however, as Newby, Cole, Matheny and Weatherby finished the day with a combined record of 17-1, with 14 pins.

With a 4-1 record on the day, the Trojans finished as the region runners-up and will join Cherokee in the state duals, which begin Thursday in Macon.

“It’s nice to be going to state duals, but I’m still disappointed in the second seed,” Lassiter coach Matt Brickley said. “We were shooting for the No. 1 seed, but we came up a little short. We missed out on the state duals last year, so it’s nice to get back down there.”

For second-year coach Jeremiah Lutz, the results Saturday were a trend in the right direction.

“I was super happy with today,” Lutz said. “I’m looking at the results from last year when we finished last and lost all six matches. Going from that to winning three is a good improvement. I’m still trying to build their confidence up, and I think that Roswell match really helped us see that we can compete and win a close match like that.”

Cherokee headed into the final match of the day needing to beat Etowah to avoid a possible three-way for first place. Kadien said he had seen the improvement in Etowah’s program under Lutz, and he was not counting on anything easy.

In his fifth year at Cherokee, Kadien said he has seen a growth within his own program as well.

“(Etowah) has really had a quick turnaround from last year, so we were nervous going into that last match because they only had one loss to Lassiter,” Kadien said. “The summer before that first year, I had seven kids in the room. We’ve really been building since then and one of the greatest points of pride I have about it is each one of our kids is homegrown. We pull kids out of the hallway and we take great pride in that.”