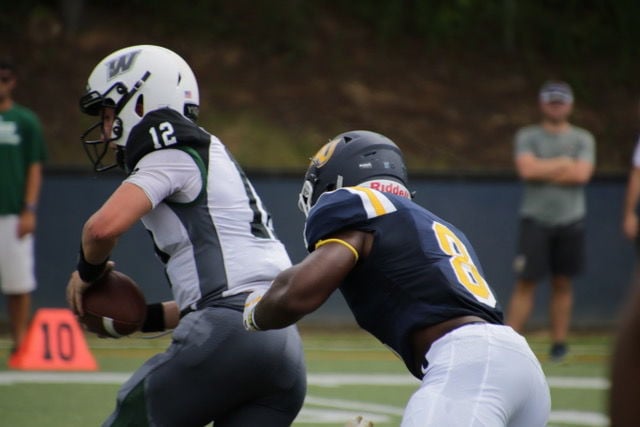 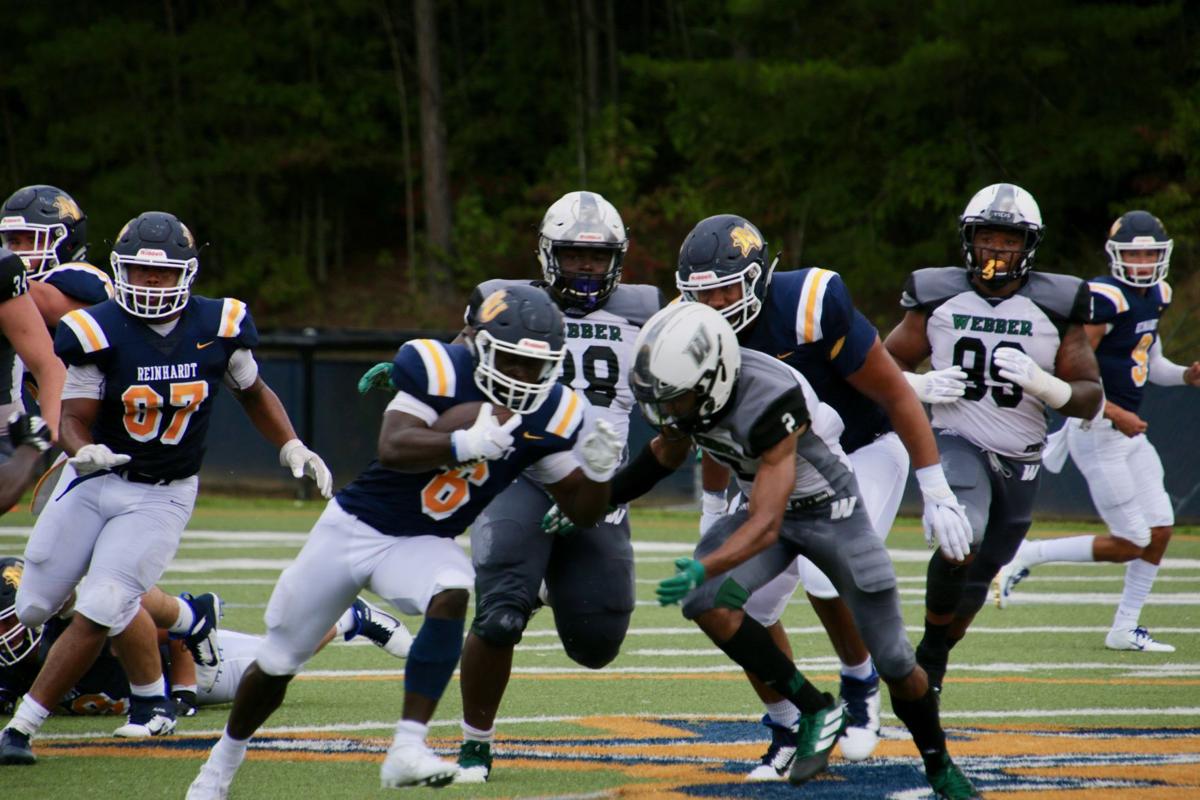 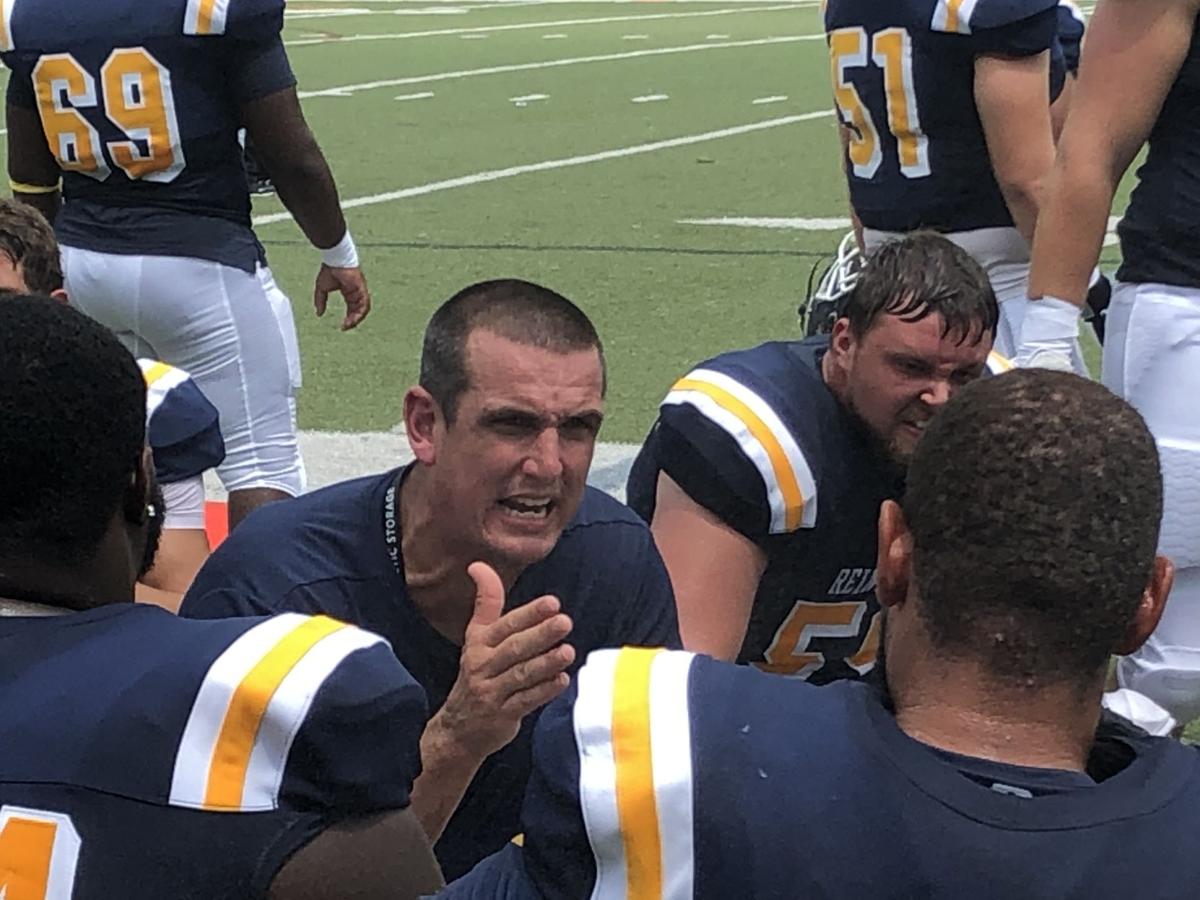 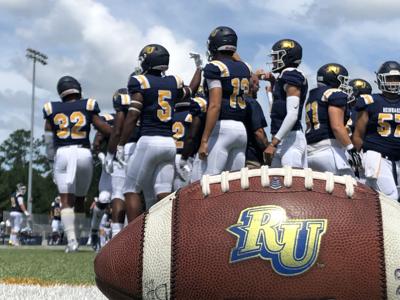 WALESKA — For a team that has traditionally scored points in bunches, it was the defense that carried the weight Saturday afternoon.

Playing in hot and humid conditions from the opening kickoff, Reinhardt began the season with 16-6 victory over Webber International University.

The game ended with 4:07 remaining in the fourth quarter, after administrators from both teams agreed to call the game after a lightning delay halted play.

Despite scoring the fewest points in a game since a 24-13 loss in the 2017 NAIA championship game, Reinhardt (1-0) made the plays that mattered and was able to hold on for a season-opening win.

After the game, Eagles coach James Miller said there was room for improvement moving forward.

“It wasn’t something that was glaring, but we’ll go back and watch it. We’ll see that if we just clean up a little something here and there, maybe we’ll have some better plays,” Miller said. “Maybe, we could have done a better job as coaches, too, but I was proud of the effort. I thought the kids played pretty hard in some pretty tough conditions.”

Reinhardt opened the scoring when kicker Alex Hardy connected on a 16-yard field goal midway through the first quarter. It was a consolation after the Eagles recovered a muffed punt inside the Webber 10-yard line but were unable to find the end zone.

The Webber defense controlled the Reinhardt rushing attack through the first two quarters and kept constant pressure on Eagles quarterback Billy Hall, who was unable to connect with his receivers in the passing game.

Despite struggling to find its offensive rhythm in the first half, the Reinhardt defense looked impressive from the opening kickoff. Defensive ends J.T. Graydon and Matthew Prather were in the Webber backfield on a consistent basis, holding the Warriors to 36 total yards in the first half.

While he enjoyed personal success Saturday, finishing with five tackles and two sacks, Graydon said he was proud of the entire defensive unit for the Eagles.

“Webber looked pretty good on film, and they did a lot of the same stuff we saw,” Graydon said. “Our secondary and linebackers, they all stepped up today. It feels good when we’re all playing like that because, if they try to focus on one guy, it frees up the other guys. Either way, on third down, their quarterback is going down.”

The teams entered halftime with Reinhardt leading 3-0, and the defense again led the way to start the second half.

Sophomore safety Sydney Hamm intercepted Webber quarterback Cody Braden on the opening series of the third quarter and set up the Eagles with a short field on the Webber 16-yard line. Three plays later, senior running back Montralius Mosley took the ball around the left side for a 9-yard touchdown.

The extra point was missed, but it seemed the Reinhardt running game, from that point on, began to resemble the team that led the NAIA in rushing yards last season.

“I think we found things that worked for us in the second half, and not just me, but the whole offensive unit,” Mosley said. “Games like that bring you closer together as a team, because the defense picked us up today. It’s a long season, and I think we’ll continue to fix those little mistakes we made today.”

Webber found the end zone late in the fourth quarter for its only score when Jeremiah Lucas hauled in a 10-yard touchdown pass from Elijah Strimmel. The 2-point conversion was unsuccessful and Webber finished with 160 yards of total offense. Reinhard held Webber to 4 yards rushing in the game, while eight different Eagles recorded tackles for loss.

Offensively, Reinhardt finished the game with 275 rushing yards on 54 carries. Mosley led the way with 70 yards on 12 carries, while Hall carried it 13 times for 61 yards. Nine other players recorded carries for the Eagles, with redshirt junior M’Calun Lanier finding the end zone from 4 yards out early in the fourth quarter.

“I thought, with our offensive line, it’s going to be a jelling process,” Miller said. “I thought we made some adjustments at halftime, and our guys responded to that pretty well.”

Reinhardt will have next week off before hosting Pikeville on Sept. 7.