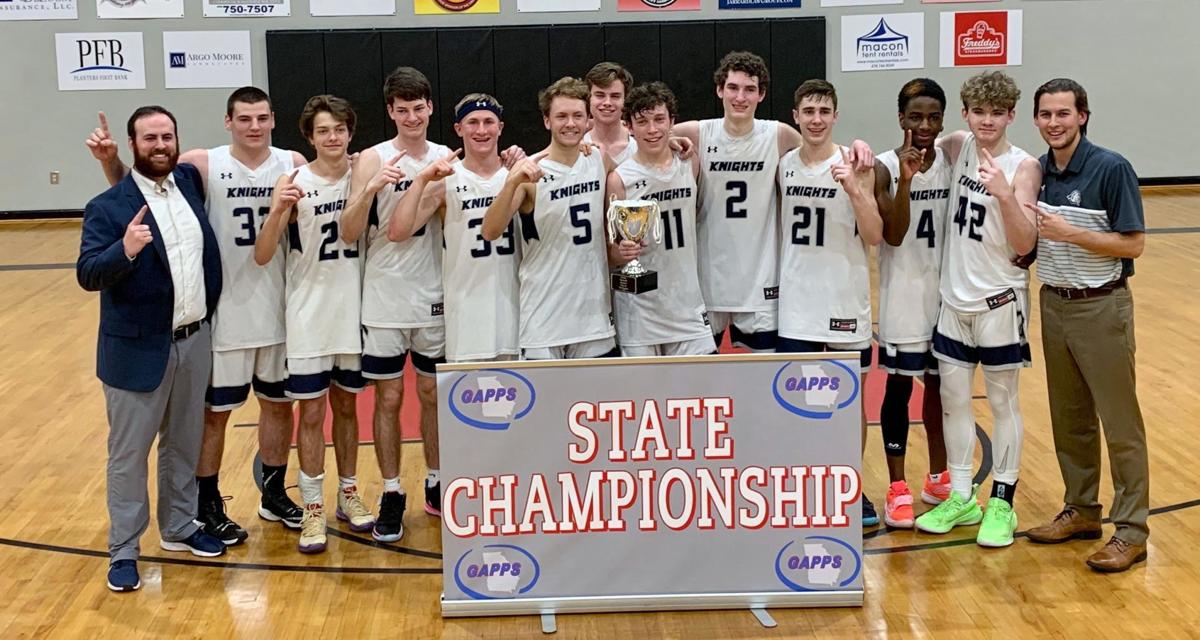 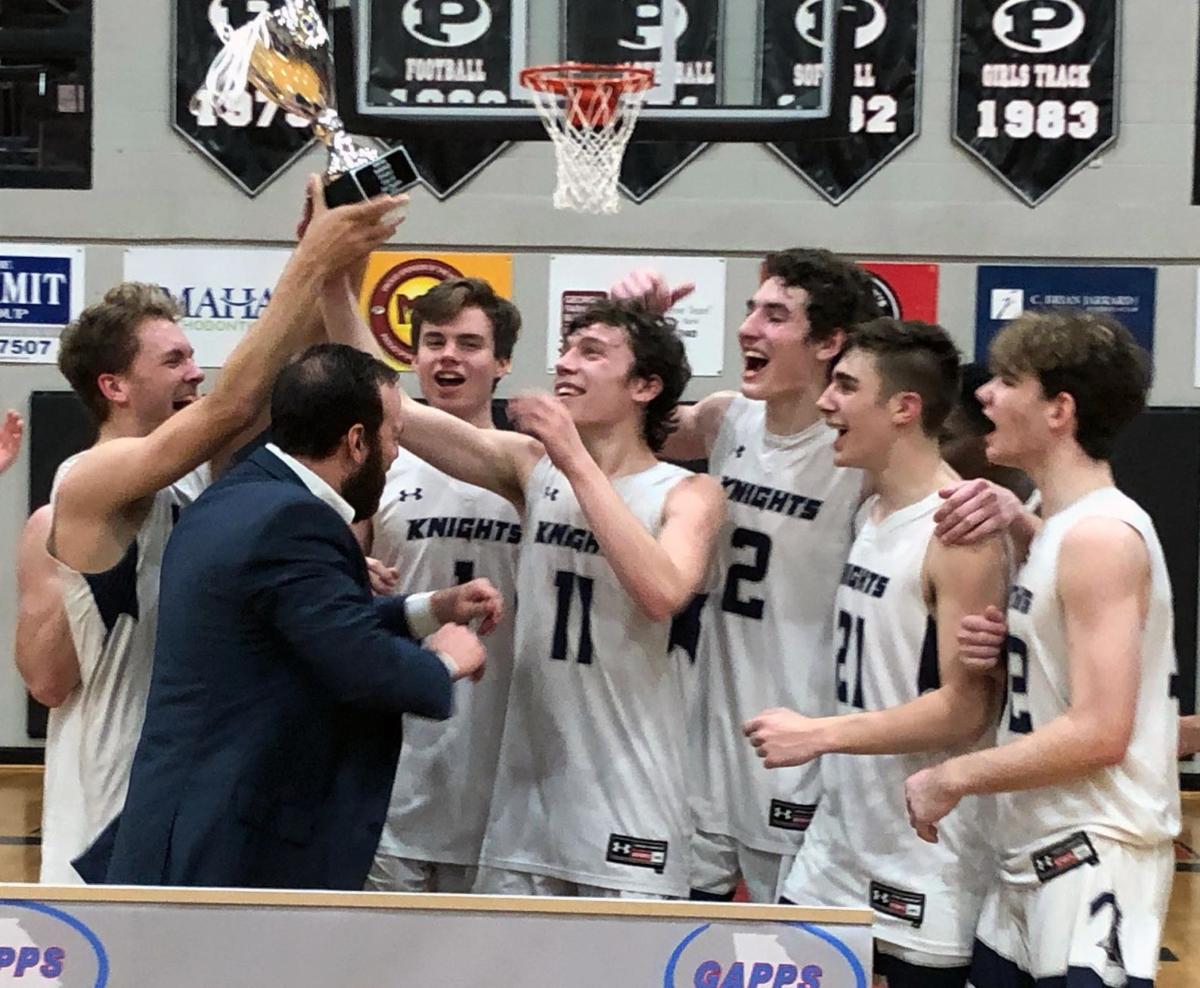 Players for The King’s Academy lift the GAPPS state championship trophy on Saturday in Macon. 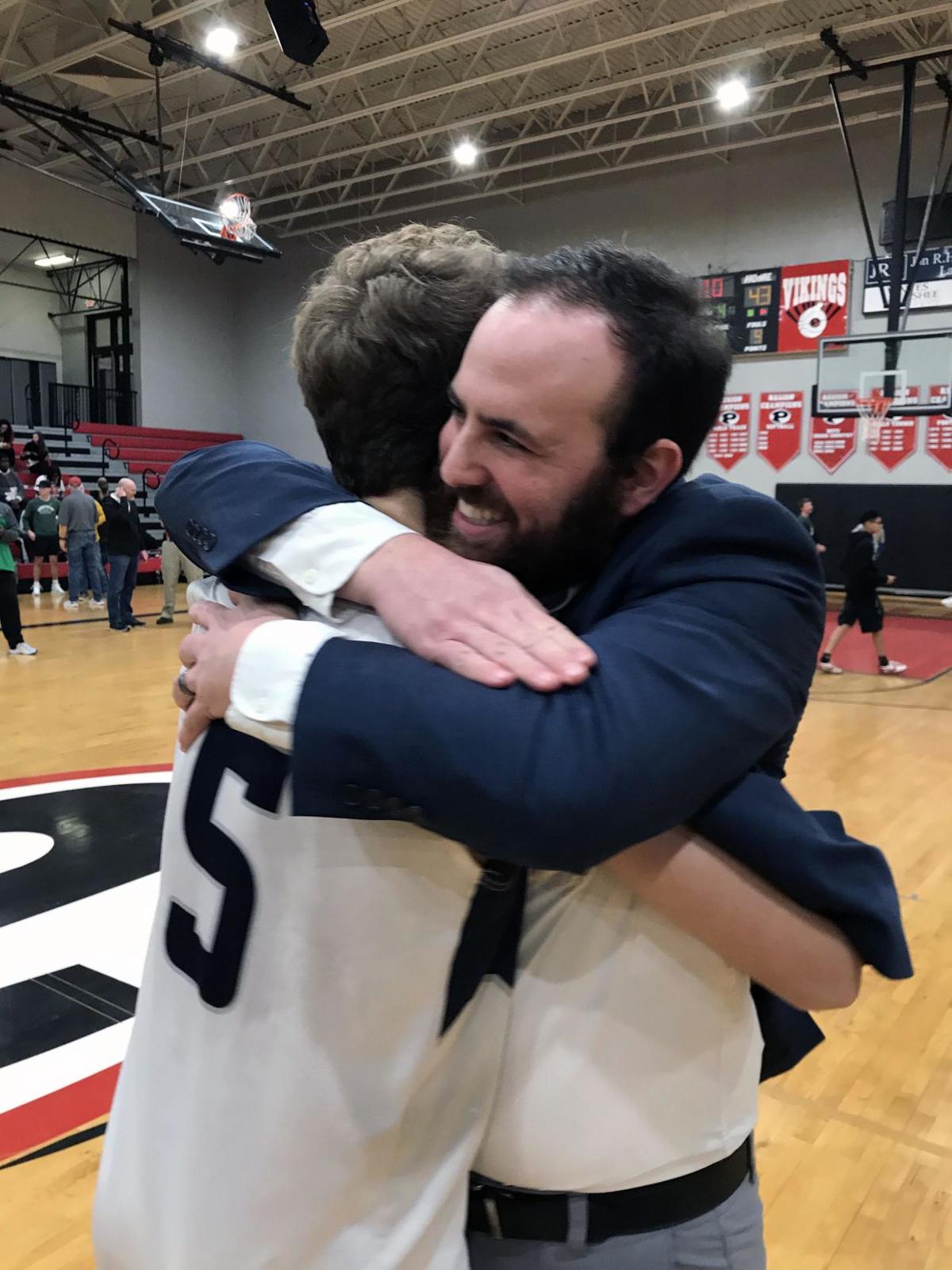 After years of coming up just short, The King’s Academy knocked down the door on Saturday night.

Playing at First Presbyterian Day School in Macon, King’s Academy defeated Cornerstone Preparatory Academy 43-40 on Saturday in the Georgia Association of Private & Parochial Schools basketball state championship. It was the first state title for King’s Academy in basketball after three times finishing as state runners-up. and

“We’ve kind of been non-celebratory through the whole run, once that buzzer sounded it was kind of a release of all that energy,” Hereth said. “I had a bunch of former players texting me after the game and every one of them was thrilled we finally got one. It’s great to feel like we’re all a part of something bigger than ourselves.”

The Knights finished the season 24-7 and the victory over Cornerstone was the second of the three meetings between the region rivals. The low-scoring affair was similar to the first game between the two schools when Cornerstone prevailed 48-47, but this time the Knights outlasted the Cougars to claim the state title.

After King’s Academy jumped out to a 7-0 lead to start the game, Cornerstone retook the lead and led for the entirety of the game until the final minutes. King’s Academy trailed by eight points early in the third quarter but Hereth said he was never worried about whether his team could recover.

“I wasn’t really nervous because we were always within striking distance and a play or two away from being up,” Hereth said. “With the way we can shoot the ball I never really feel like we are out of a game.

“It was a great game. Playing in the same region we obviously know each other very well. It was crazy how locked in both teams were.”

The winning formula for King’s Academy ended up being feeding senior and Oglethorpe commit Drew Conroy who finished with 18 points, 12 rebounds and four blocks. Conroy scored 10 of his points in the fourth quarter and was complemented by fellow seniors Brock Hoover and Caden Palmer. Hoover finished with 11 points, seven rebounds and five assists while Palmer finished with four points, three rebounds, six assists and four steals.

The Knights’ defense, which was praised by Hereth during the lead up to Saturday’s game, once again was a deciding factor. King’s Academy held Cornerstone to its second-lowest scoring output of the season, 27% shooting and 1-for-14 shooting in the fourth quarter.

The championship was a final cap on a season which saw King’s Academy knock off five GHSA schools including AAAAAAA programs Lassiter, North Paulding and Woodstock. For a program which was unable to play GHSA schools until 2017, the competition during the regular season undoubtedly helped better prepare the Knights to capture their first state title. It was the 11th straight 20-win season for King’s Academy and the state title put the bow on the best season in program history.

“It was a great year,” Hereth said. “Looking back on it, I’m so happy for the guys because we had a lot of big moments. I feel like we’ve been competitive and really good for a while but never got over the hump. It makes me feel good and makes me feel like I wouldn’t change what we’ve done over the past few years. The satisfaction of winning is awesome, but it’s a greater satisfaction that we’re doing things the right way.”